This autumn, kamel mennour presents three exhibitions by Tatiana Trouvé at its galleries in London and Paris, and at its Frieze London booth with new works especially conceived for each location. 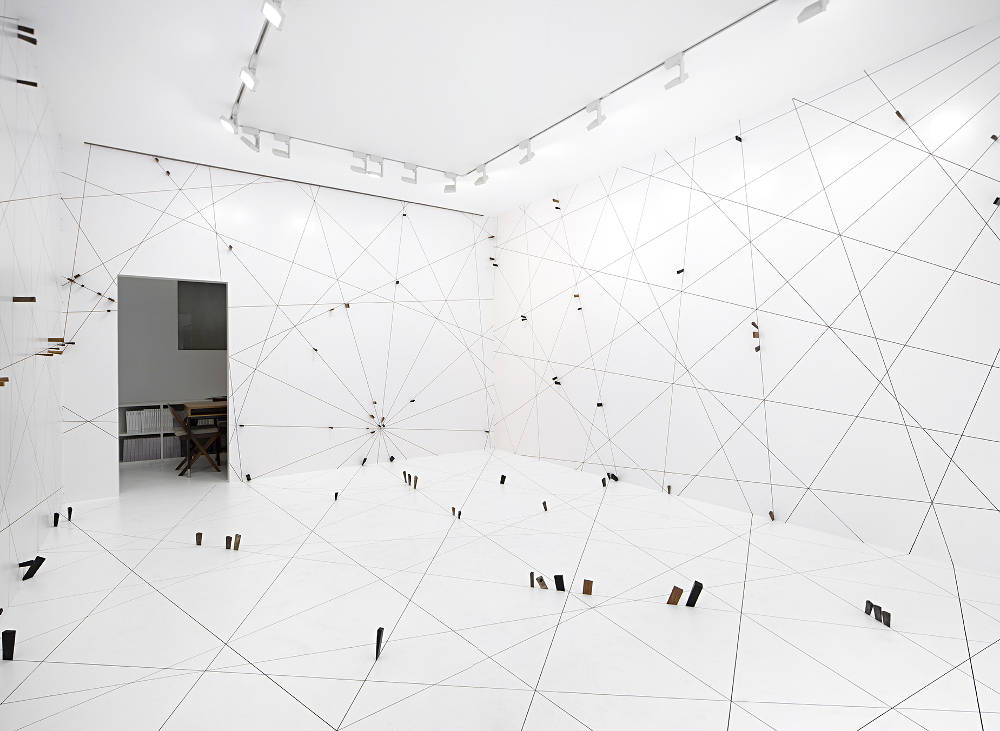 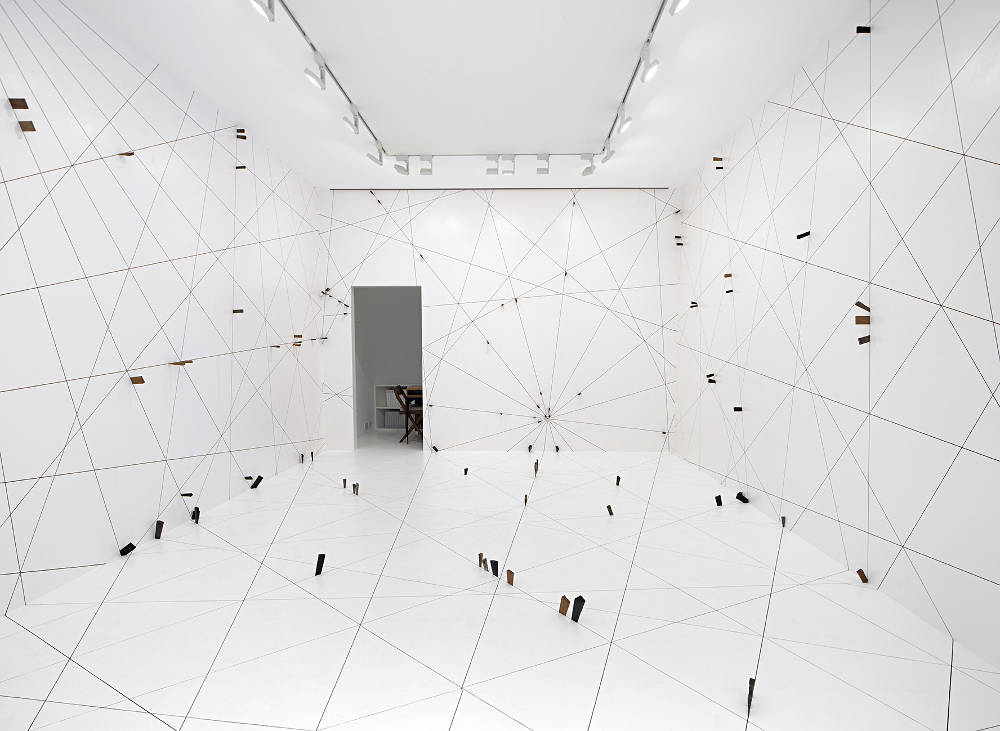 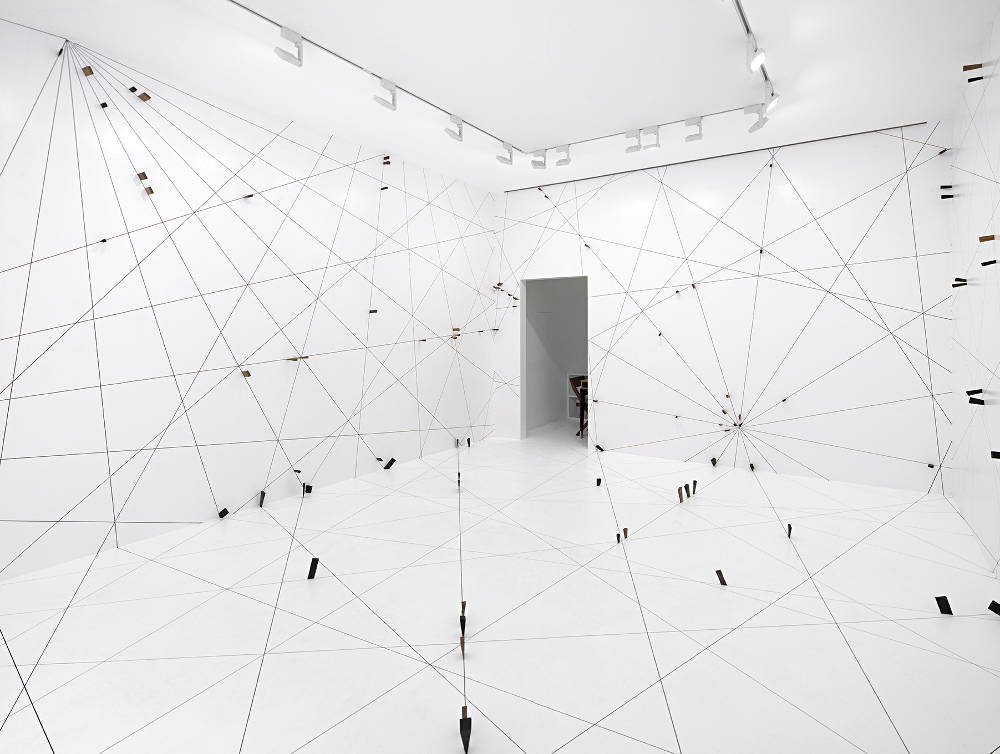 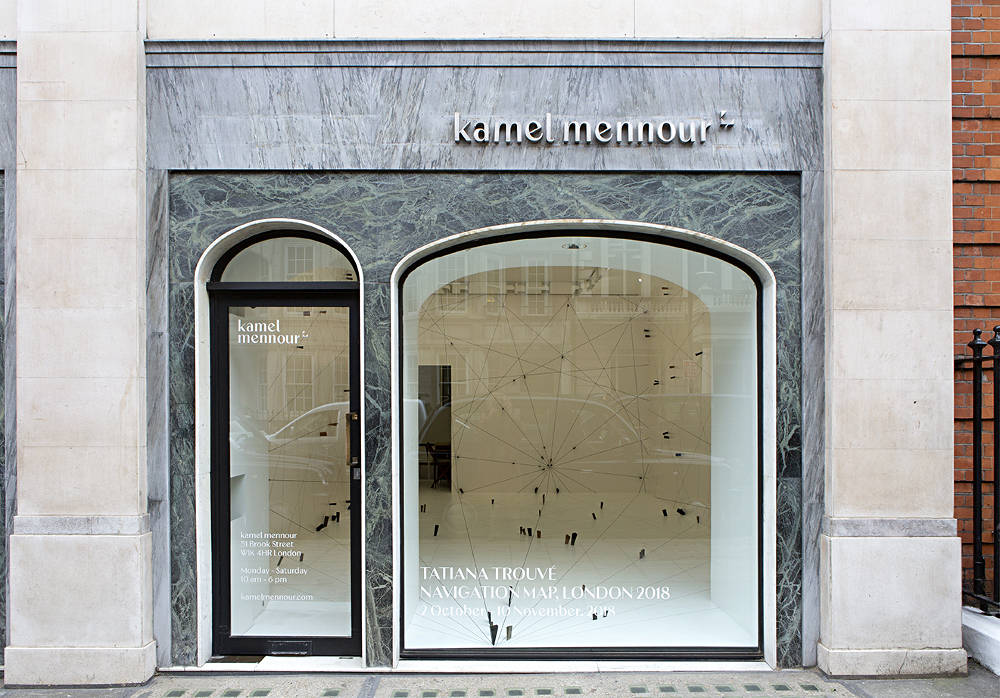 Italian-born, Paris-based Tatiana Trouvé is known for her sculptures, installations and drawings often brought together in precisely-scaled architectural installations which suggest the possibility of underlying narratives. Frequently using cast materials, such as concrete, marble, copper and bronze, she transforms everyday objects into poetic architectural sculptural forms.

On view for the first time at Frieze London, a new large-scale fountain installation features water falling from an uprooted bronze tree surrounded by a cracked concrete floor, allowing visitors to dive into an immersive experience.

At kamel mennour’s London gallery, Tatiana Trouvé re-enacts her emblematic Prepared Space installation. In this piece, the entire surface of the floor and walls is marked by long slits inserted with spacers, borrowed from the world of architecture and construction. The various trajectories intersect and join each other to form an abstract navigation map, creating a microcosm with random punctuations, a kind of geographic homage to Cage’s “prepared pianos”. This is the artist’s first major solo exhibition in London since her South London Gallery show in 2010.

In the Paris gallery, Tatiana Trouvé presents a group of sculptures inspired by visits to her studio at night.

The exhibitions are accompanied by a text from philosopher Emanuele Coccia.

All authentic art is capable of crossing the boundaries of space and time. It has the gift of ubiquity because it tends to coincide with the world. Tatiana Trouvé will inaugurate her collaboration with kamel mennour by dislocating herself over three different sites: the gallery at 47 Rue Saint-André-des-Arts in Paris, the London gallery, and the stand at Frieze. The three installations sketch the map of an unexplored territory, striving to construct a place where art might recover its cosmic breath, the power to entirely refashion the world, rather than representing a portion of it on the model of a still life.

Pursuing a process begun with Prepared Space (recently shown at Petach Tikva Museum of Art in Tel-Aviv), Navigation Map London 2018 transforms the gallery space in London into a truly 3D cartographical space, of the sky and earth at once. Here, the atlas is no longer simply a medium of representation, becoming itself a space to inhabit, a work of art, a place of contemplation and prayer. At the same time, the voyage itself transforms into something closer in its execution to a musical or artistic score (Cage’s Prepared Piano). This short circuit, making the voyage and its representation, possibility and reality, story and experience coincide, produces a strange transformation of the very idea of place: space is no longer extension, a simple, three-dimensional extension of matter, but rather a series of signs referring to a series of gestures, a symbolic and bodily liturgy to be activated by the spectator. Shaping space, even in the simplest way, means imagining a potential choreography, making it possible, and condensing into matter a virtual dance whose dwelling is its unfolding.

In The Shaman, a new work presented at Frieze, Tatiana Trouvé interrogates the position and the status of the subject placed before or within art. Whereas in her earlier work, the dramaturgy of her practice has privileged the attitudes of the witness (the guardian) or the traveller who has renounced all forms of property, here the artist’s self as it is embodied in the work loses its purely human traits and takes on the unexpected form of a tree that transforms itself into a fountain. A shaman is not only a traveller in the geographical and spatial sense of the word. It is someone who is able to travel from one identity to another, from one biological species to another, translating the one’s language into the other’s. On top of this, just as every tree lives at once in the air and underground, every shaman is someone able to inhabit more than one world. And, like for the tree, it is only this capacity for living at once here and elsewhere, this ontologically amphibian life, capable of constant transformation, that makes it possible for the shamanism of art to become a life source for others.

In this gesture, as in all of Trouvé’s work, something seems to shrink the different places and times of the cosmos in an archeological journey towards the deep springs of the world. It is not that her works imitate the style or the taste of a vanished time in human history—rather, by drawing not on time itself but on the original force of art and the world, of technique and nature, her works find a way to capture their most telluric power. Rather than thinking of art as the imaginative activity of the world’s lost infancy, Tatiana Trouvé strives to bring it together with planetary geology. The space of this coming together is the studio. It is in these planetary incubators that the world, things, and the souls who make them (artists) undergo an imperceptible, incessant metamorphosis, and art is its silent, implacable guardian. In her exhibition in Paris, The Quiet Life, Trouvé stages the studio as a cocoon inside of which the whole Earth experiences new forms of existence and organisation. It is thanks to these acceleration chambers that everything that remains outside of art becomes and appears as a fossil, an older, prehistoric form of existence.