Parafin presents the first solo exhibition with Tania Kovats. Titled ‘Oceanic’ the show references the artist’s ongoing fascination with the sea, water and the environment, but also invokes heightened emotional states and a profound feeling of interconnectedness with nature. The exhibition includes two major sculptural works, Bleached (2017), and Divers (2018) not previously exhibited in London, alongside brand new works on paper. 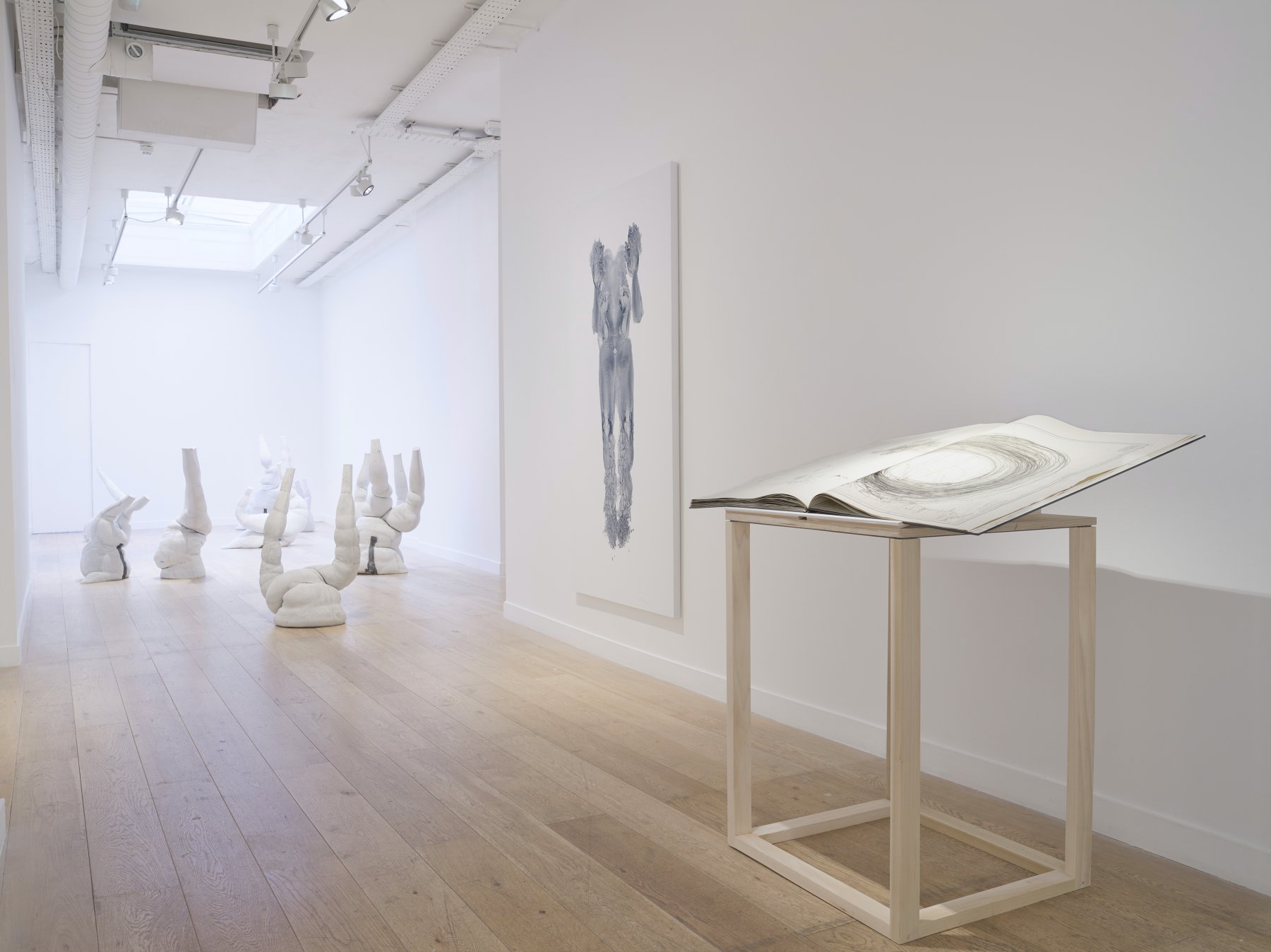 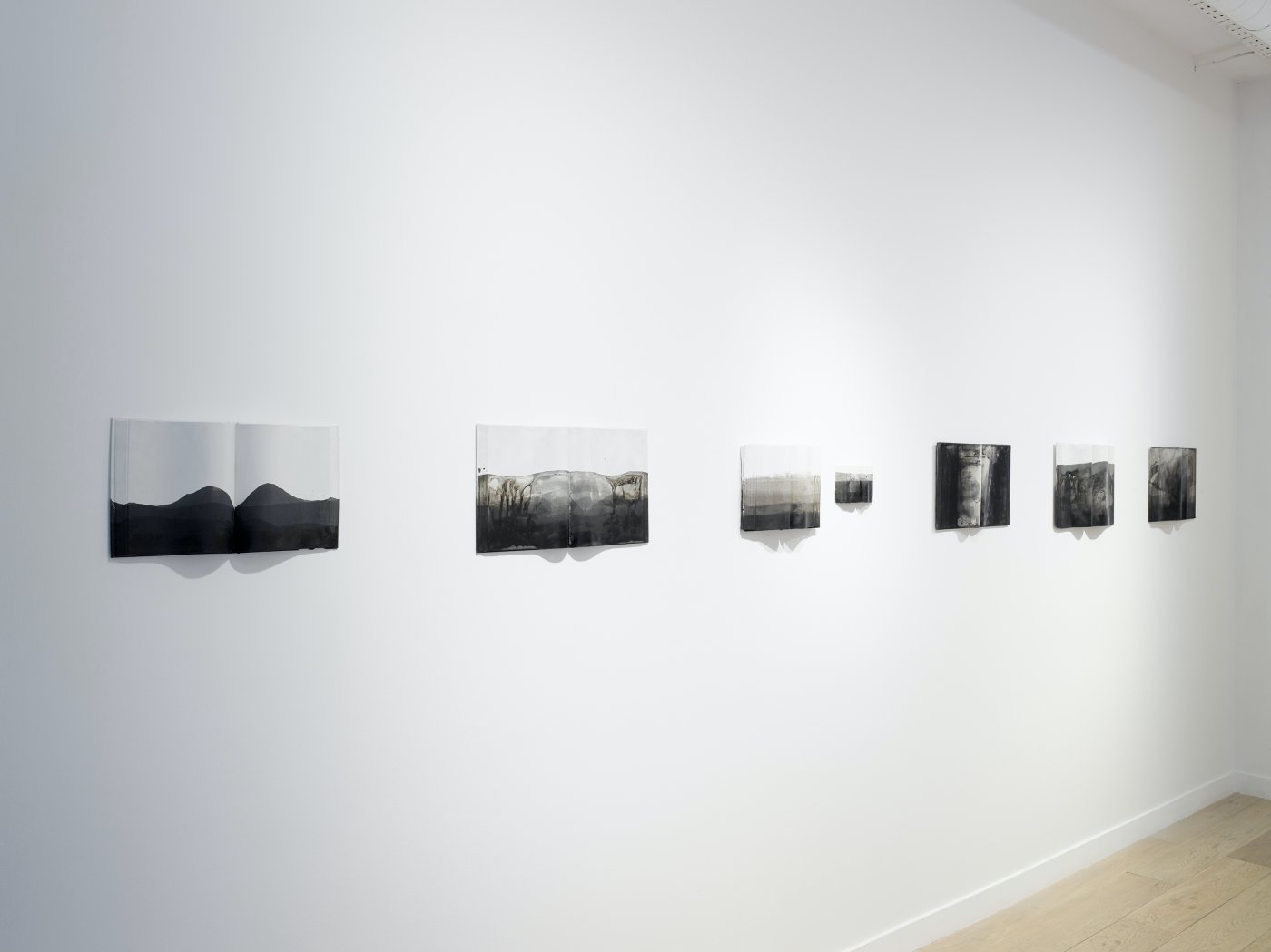 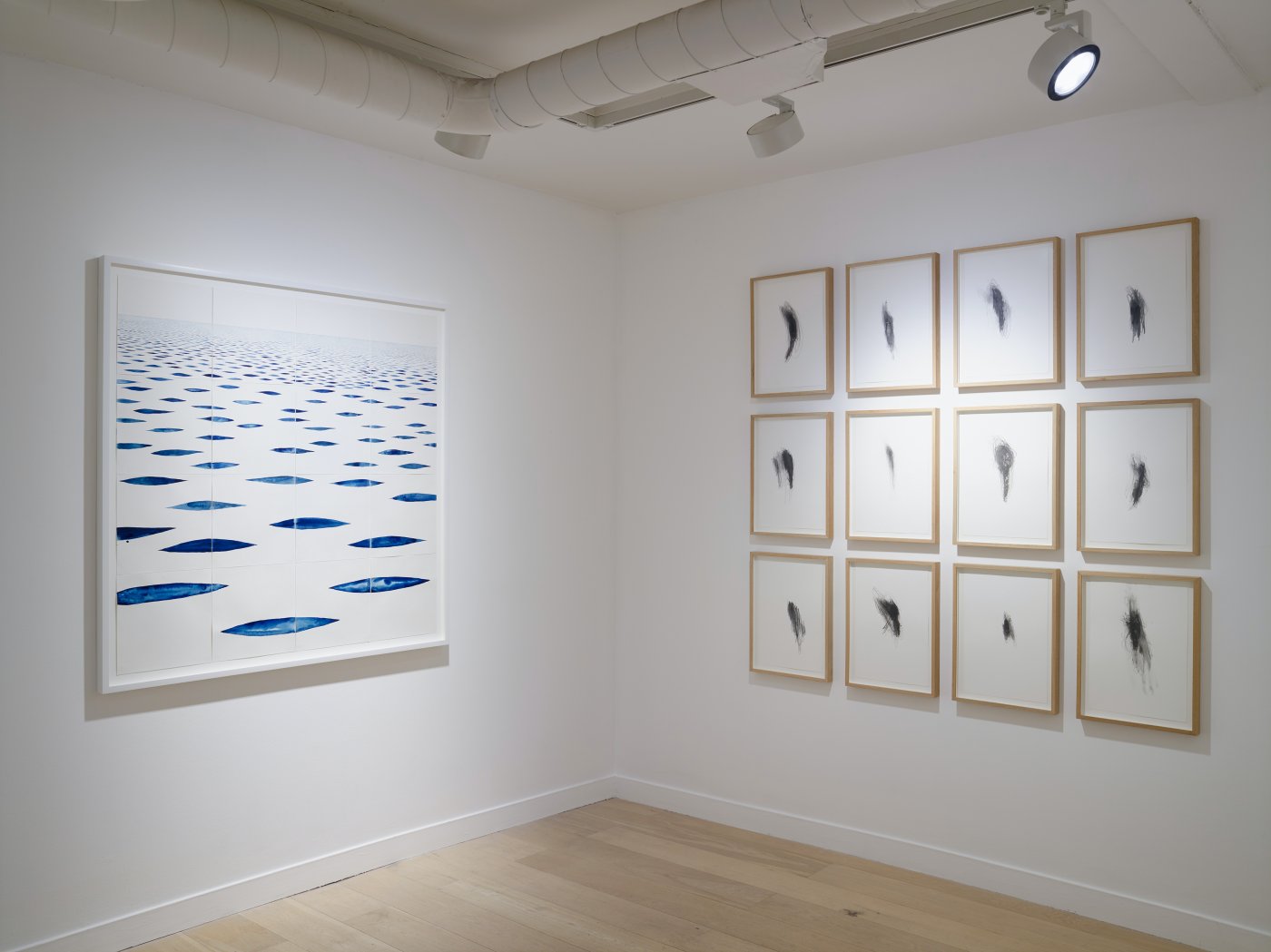 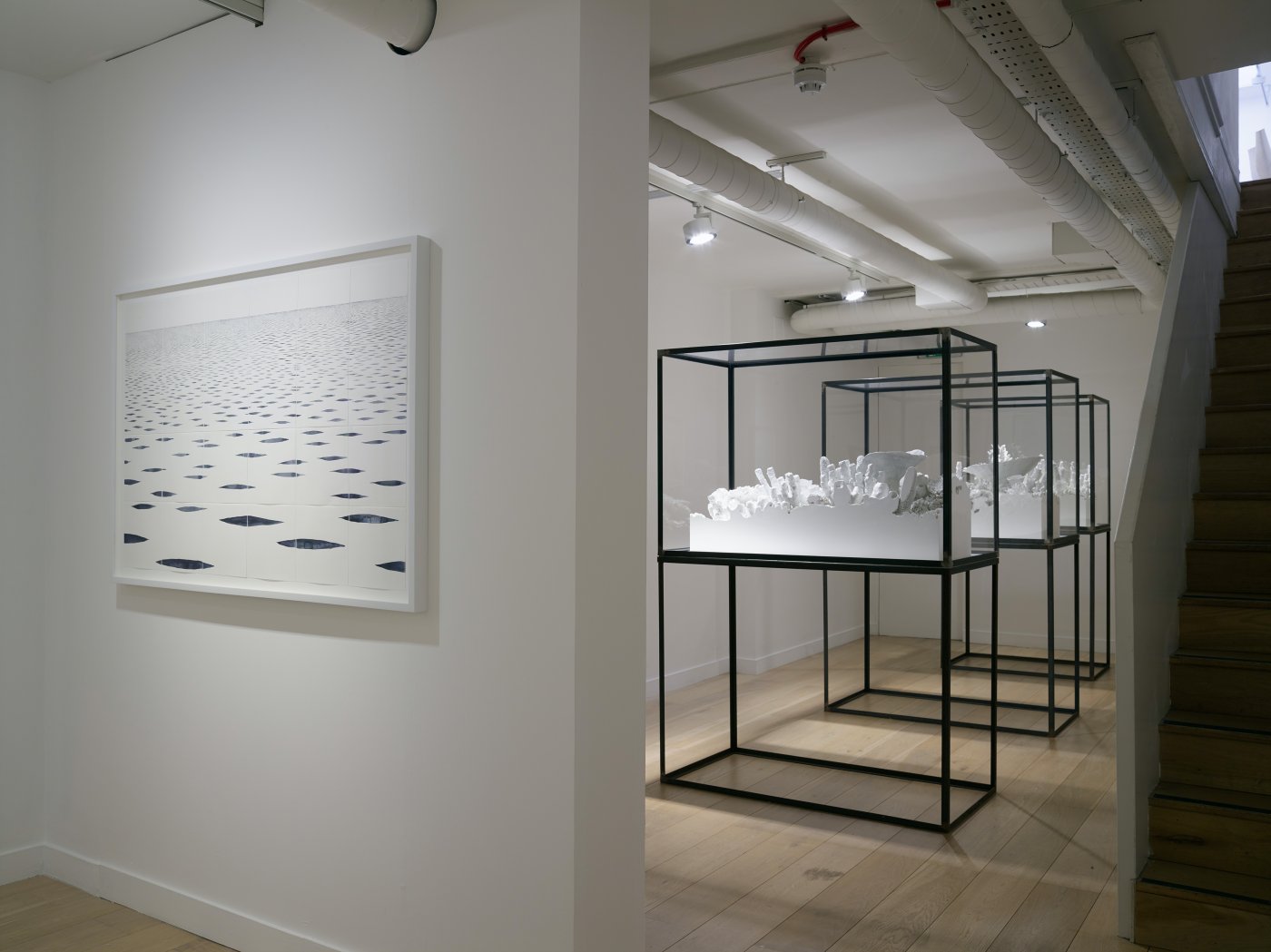 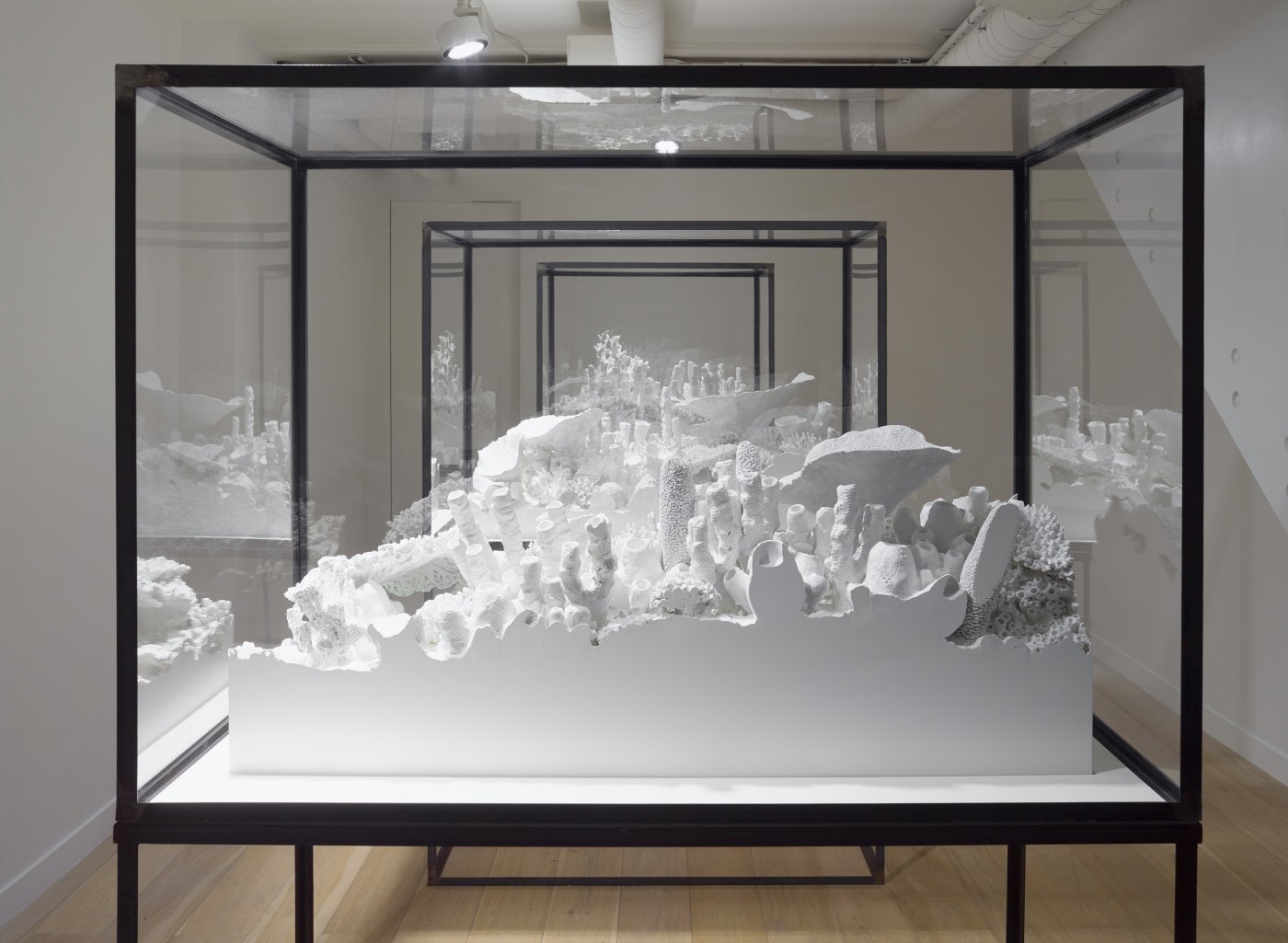 Tania Kovats (born Brighton, 1966) makes drawings, sculpture, installations and large-scale time-based projects that explore our experience and understanding of the natural world. While Kovats is perhaps best known for her sculptures and drawings, her work encompasses a range of creative strategies, from map-making to writing, and she is also active as a curator, teacher and author. Kovat’s enduring themes are the experience and understanding of landscape, geological processes, patterns of growth and the intersection of landscape, nature and culture. Recently she has focused on water as her central subject; the seas and oceans, river systems, maritime culture, flooding and tides, necessarily touching on socio-political and environmental concerns.

The Divers (2018) are a series of figurative sculptures cast in concrete using wetsuits as moulds. These inverted aquatic figures reflect on our liquid selves and the experience of our own physical boundaries in water. Suggestive of Modernist sculpture, the figures appear to be ‘diving’ into the floor of the gallery, but also evoke marine and plant life forms. Bleached (2017) is a haunting sculpture which reflects on the remote but urgent issue of coral bleaching. Bleached recycles specially fabricated coral from The Deep in Hull, salvaged from a decommissioned display. In vitrines that mimic a museum display, Kovats’ work creates a slice through a bleached coral reef, a starkly beautiful representation of a potentially devastating environmental event.

Drawing is a central part of her practice and Kovats is a prominent advocate for its importance as a creative and reflective medium. She has written two acclaimed books on the subject, The Drawing Book (2006) and Drawing Water (2014). She says: ‘Drawing is the most direct form of visual communication. It crosses boundaries easily and belongs to everyone; engineers, architects, designers, archaeologists, and scientists all draw.’ The exhibition includes new drawings inspired by the artist’s on-going interest in marine biologist Rachel Carson’s seminal 1953 book The Sea Around Us, a series of works made directly onto maritime charts and maps, new ‘Orgasm Drawings’ and body prints, as well as a group of Kovats’ signature ‘Sea Mark’ drawings.