Take a Picture Make a Picture explores a considered meld of an individual artistic gesture and popular imagery in iconic paintings by Jeff Koons, Richard Prince, Rudolf Stingel and Christopher Wool – the key exponents of the generation which came of age in the 1980s. 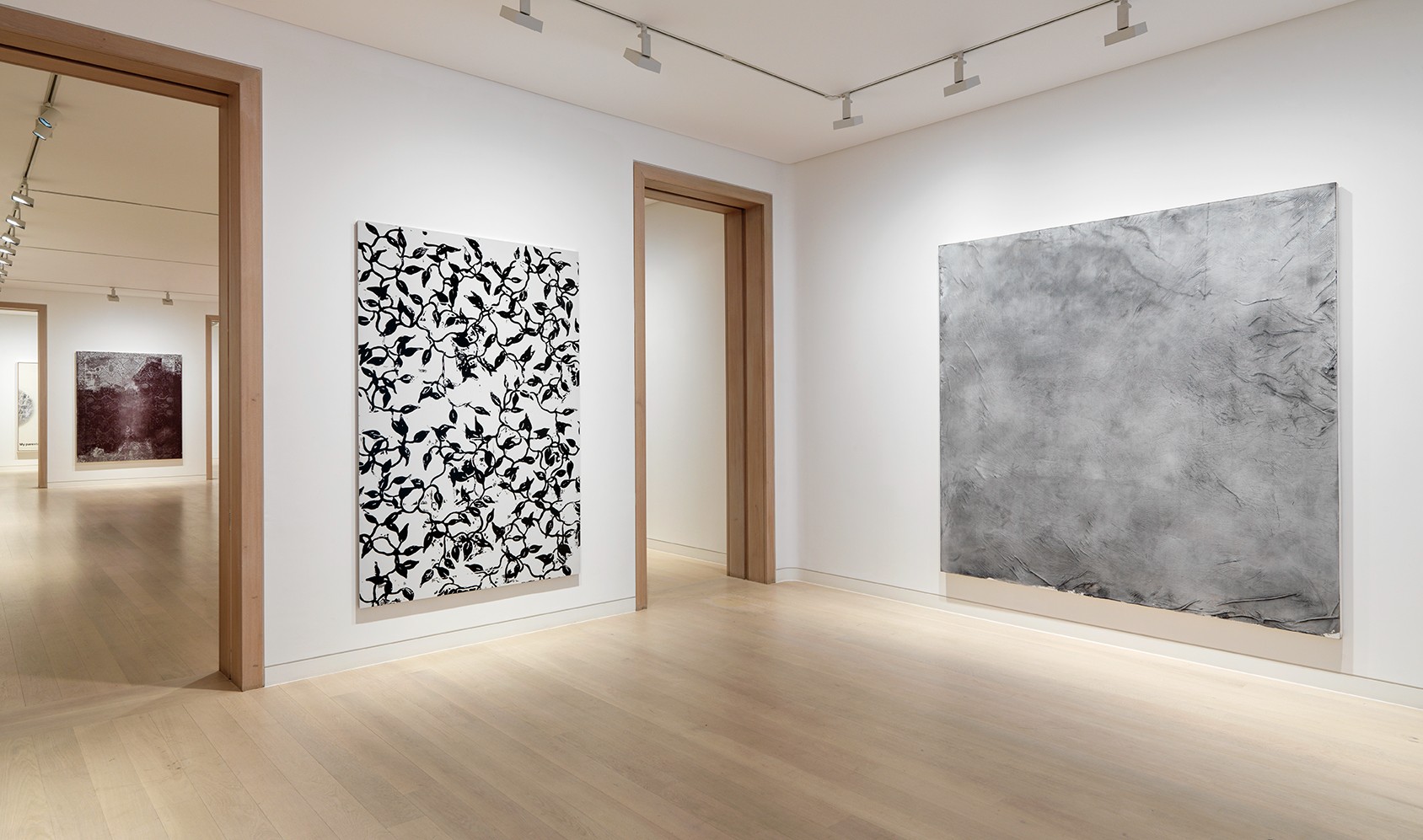 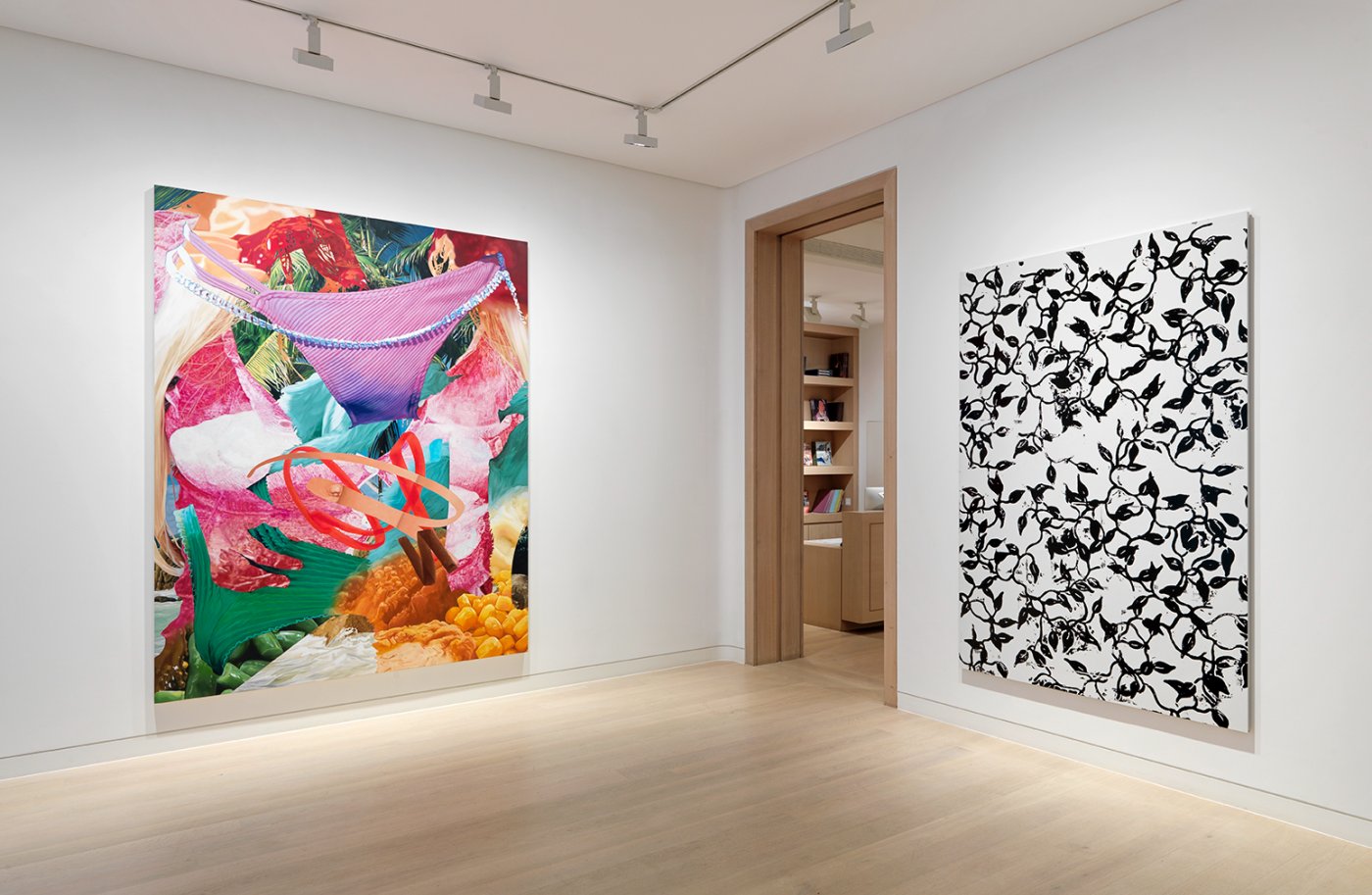 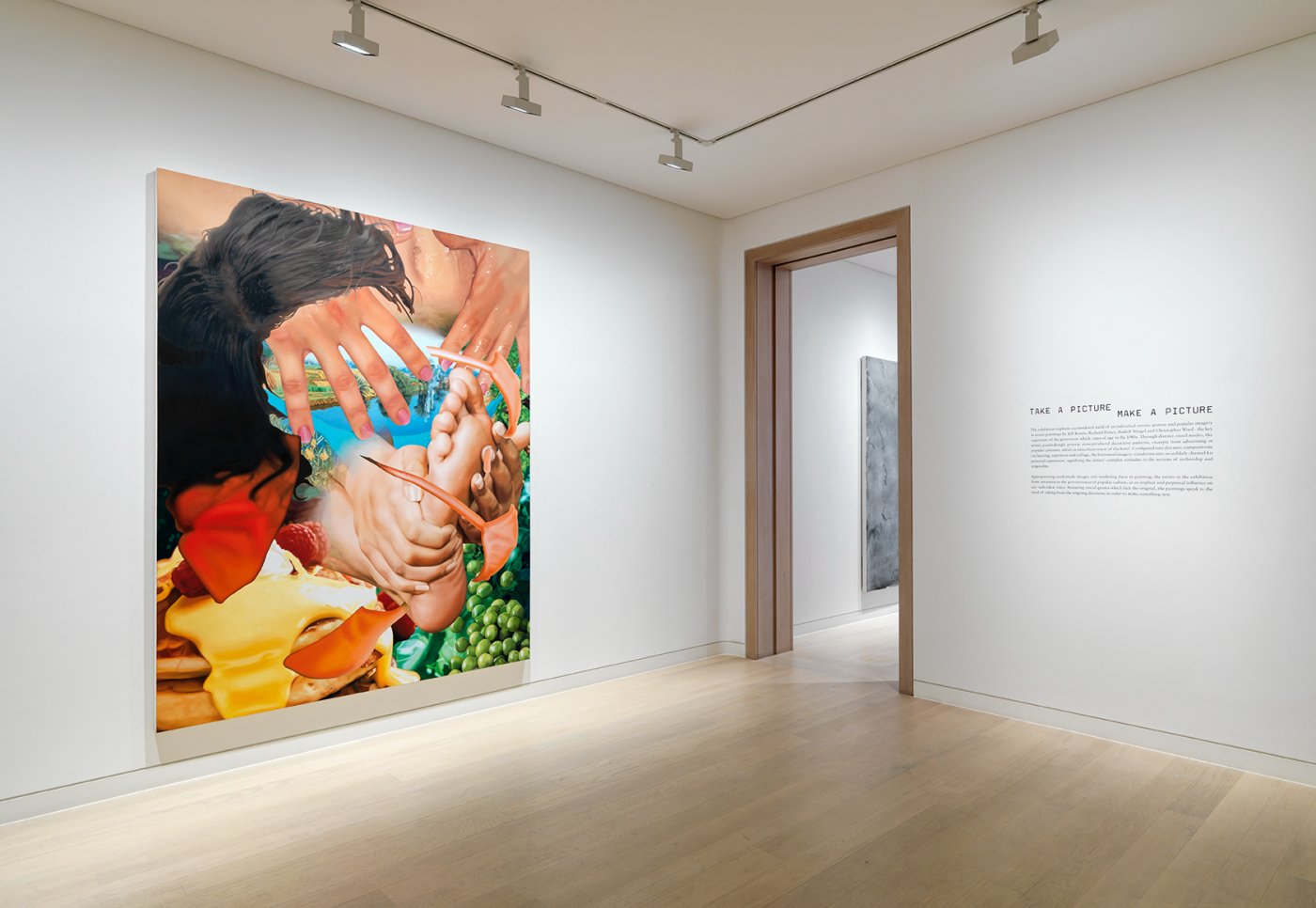 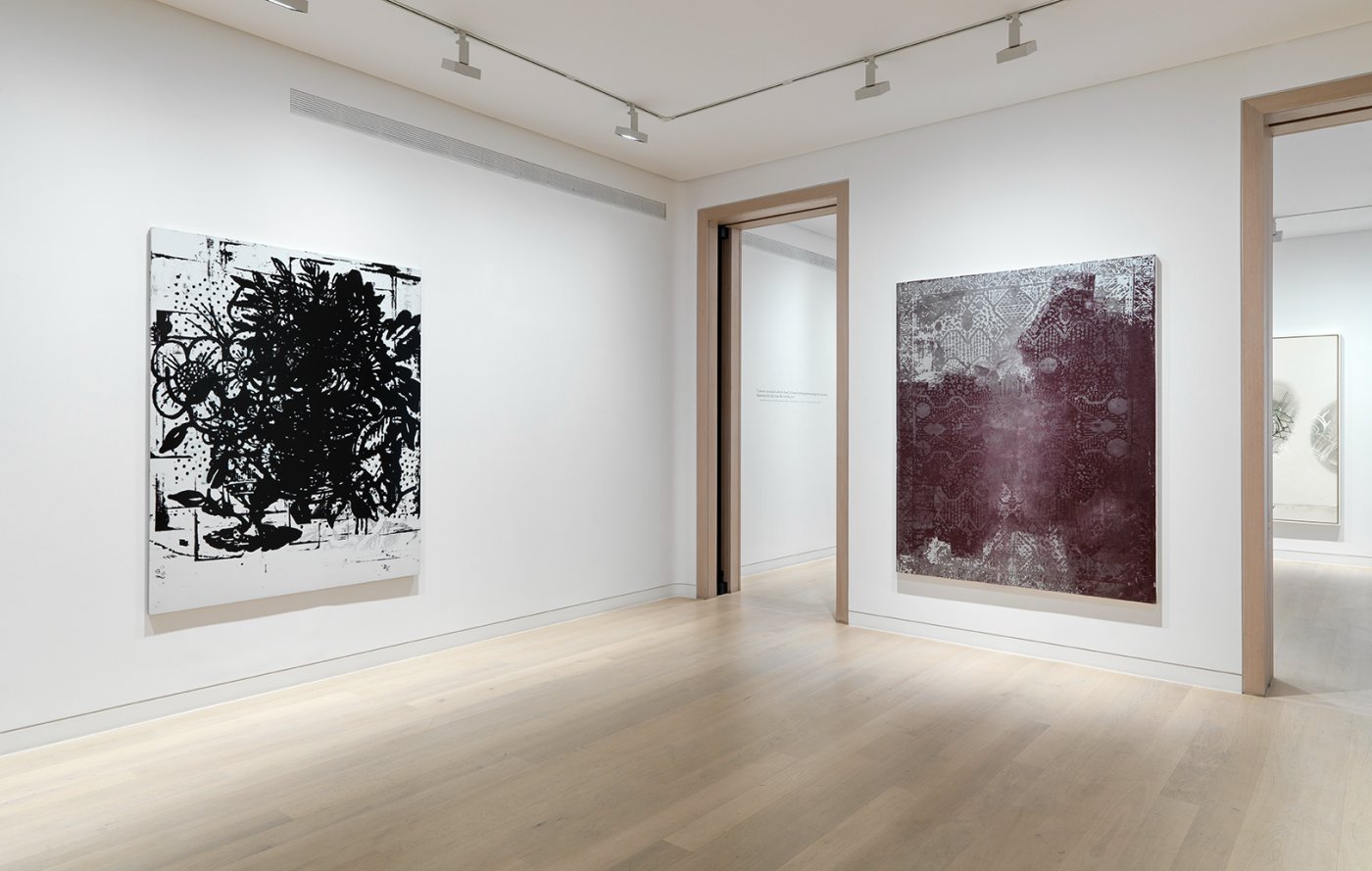 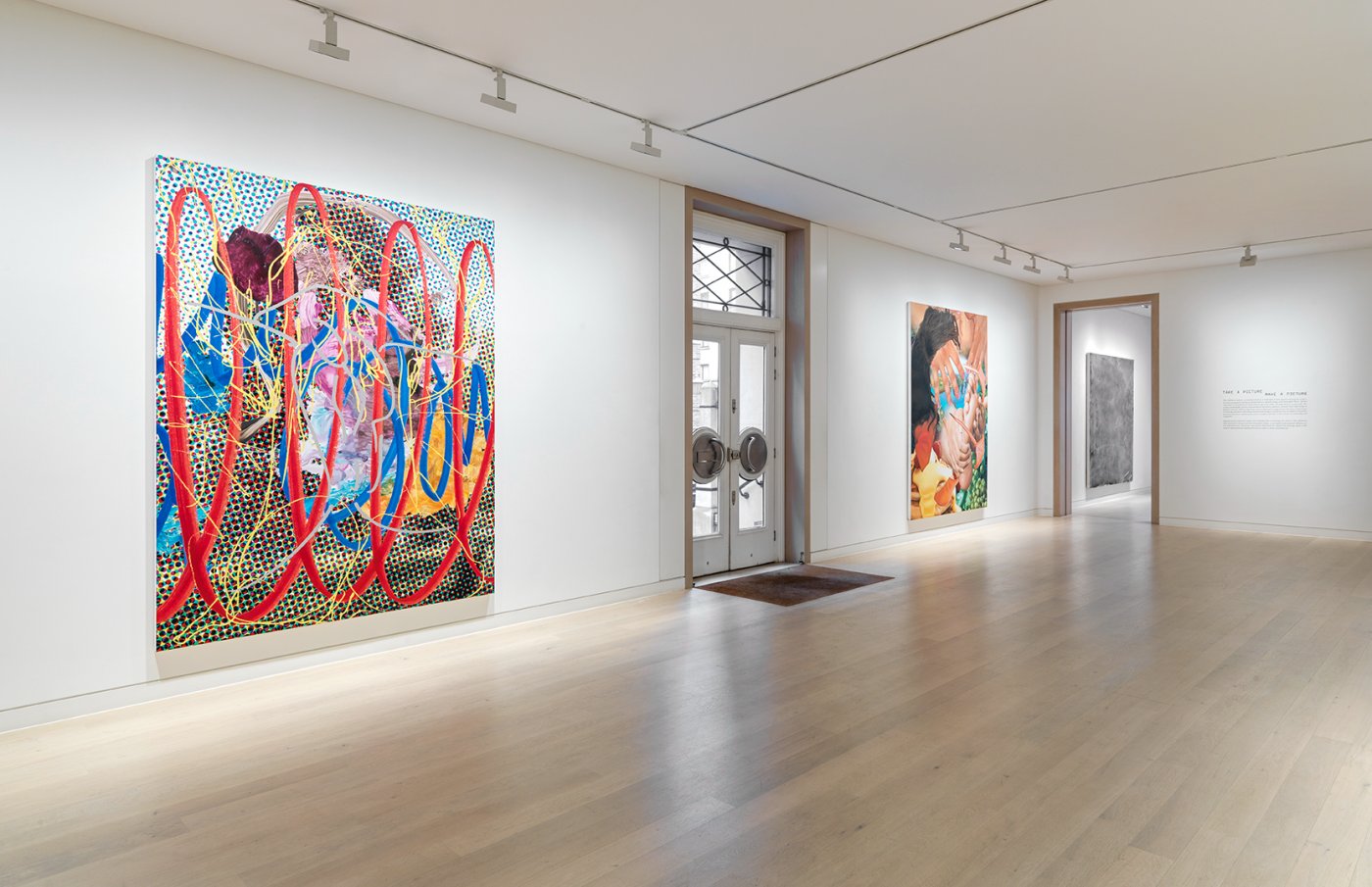 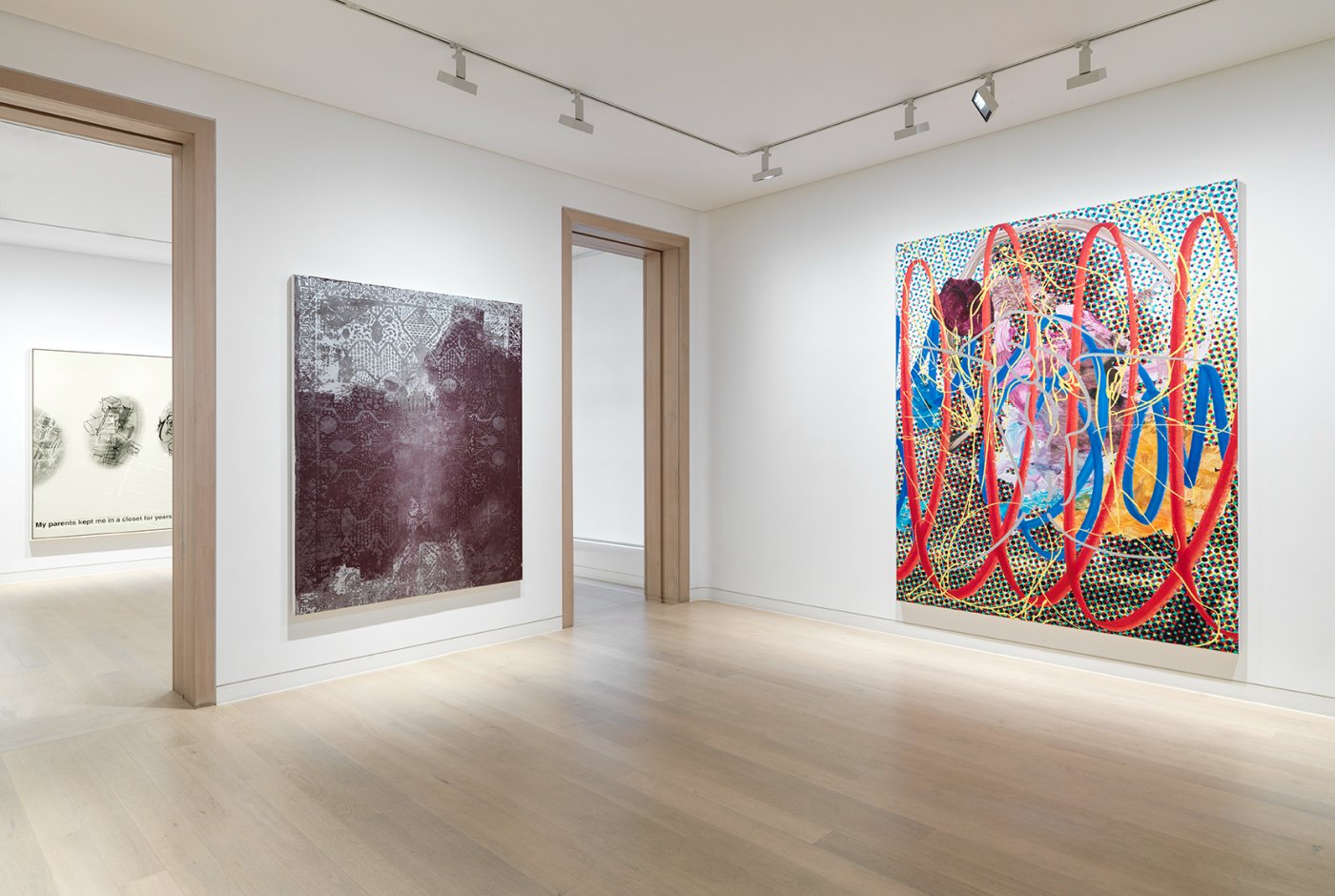 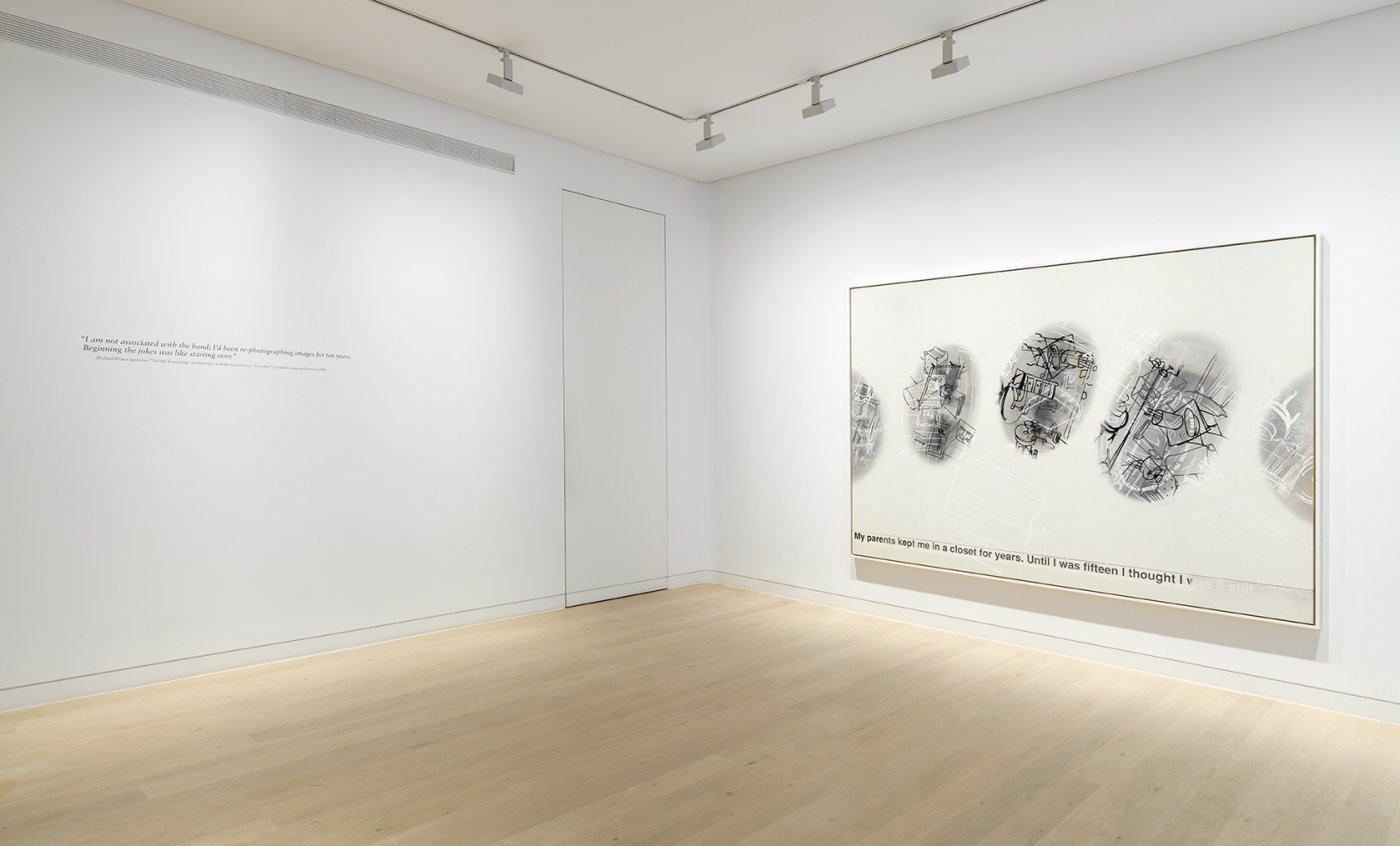 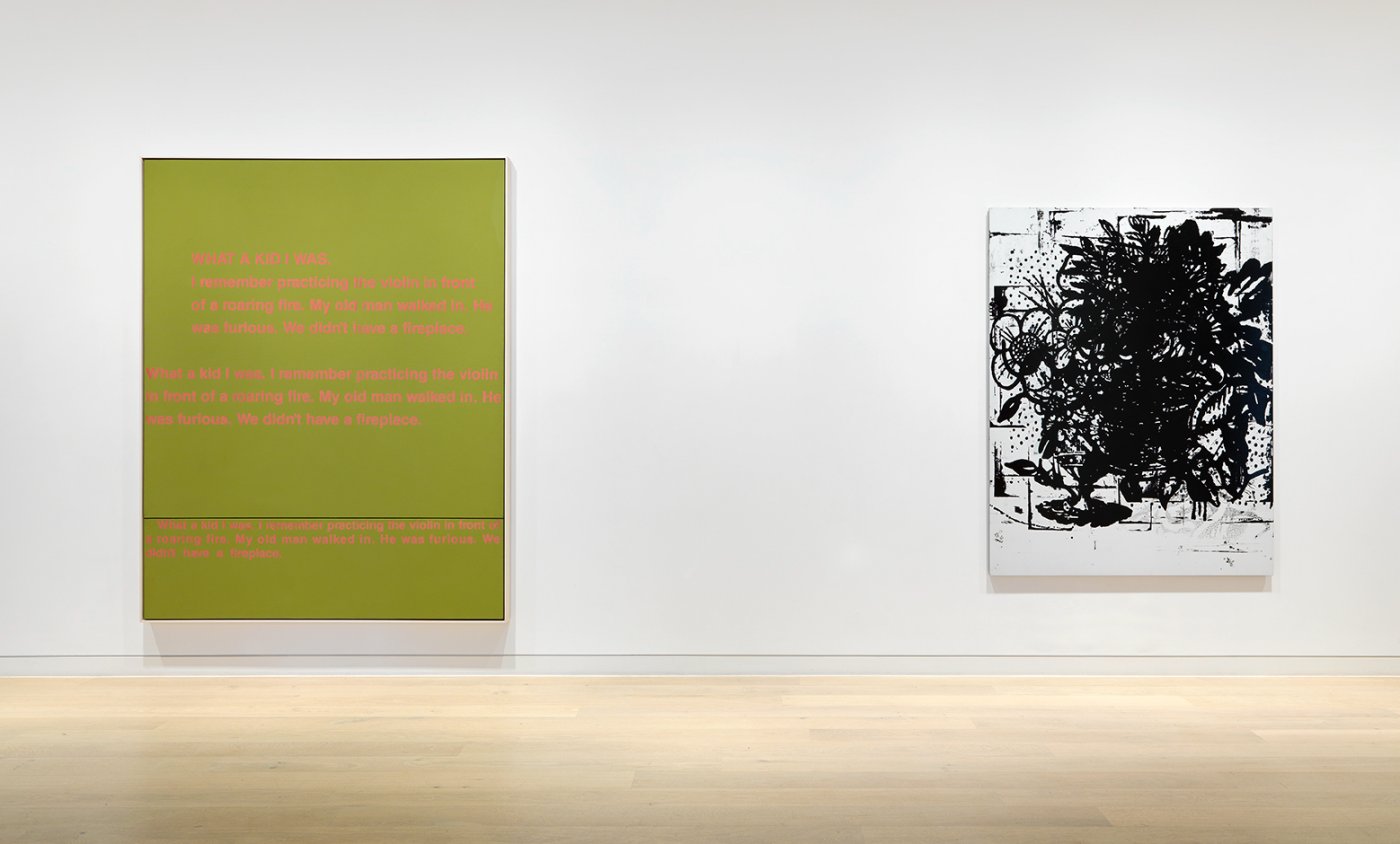 Through distinct visual modes, the artists painstakingly portray mass-produced decorative patterns, excerpts from advertising or popular cartoons, which at times bear traces of the hand. Configured into dynamic compositions via layering, repetition and collage, the readymade imagery transforms into an unlikely channel for personal expression, signifying the artists’ complex attitudes to the notions of authorship and originality.

Employing mass-produced tools used for domestic decoration such as pattern rollers and rubber stamps, Christopher Wool merges the image with the process of its making. In Untitled (1991), the predictability of the vine print clashes with coincidental distortions caused by the artist’s hand, instilling the work with the sense of muted yet resolute expression. In a humorous exchange on the influence of Robert Gober’s hand-made sculptures of household sinks on his own work, the artist emphasised:

Christopher Wool: […] what is it that Duchamp did? – Those things. What are those things? Got to ask one of those conceptual artists.
Martin Prinzhorn: Urinals?
Christopher Wool: No, but . Readymade! Gober, you know, he sculpted something, he didn’t readymake it. So I learned something about making paintings. The quality that went into making it being so important to the strength that the piece had […]
[1]

Altering ‘readymade’ into a verb in a characteristic deadpan manner, Wool articulates an ironic stance to art historical terms and hierarchies, resonant with iconic ‘Joke Paintings’ by Richard Prince, also on view here. Limiting the gesture to a vestige of the printing process, the artist calls for the sensitivity to human expression despite the scepticism towards individualistic subject matter.

Featuring ‘authorless’ jokes, Prince’s ‘Joke Paintings’ ironically marked the first introduction of the artist’s hand in his work, which was previously centred on re-photography of advertisements and magazine pages. Interested in early comic cartoons, the artist began to re-draw the images in pencil on paper and re-writing punchline by hand. In “WHAT A KID I WAS” (3 TIMES) (1989), the joke from these early drawings is repeatedly silkscreened on to the large-scale monochrome canvas in varying formats, mimicking the visual modes of abstraction, as if making a joke on painting as a medium.

Written in first person, jokes often reveal subtexts of identity and memory. Indeed, Prince has repeatedly pointed out the personal nature of the jokes he works with – once asked about his childhood, he noted: “There is that joke. My parents kept me in a closet for years. Until I was fifteen I thought I was a suit. […] they are personal but I didn’t make them up.”[2] Communicating the individual experience with borrowed texts and images the artist thus questions the autonomy of personal identity and points at the role of popular culture in shaping the human psyche.

Rudolf Stingel’s Untitled (2012) from the celebrated series of carpet and wallpaper paintings exemplifies the artist’s continued probe of physical and metaphorical parameters of the painterly medium. As the artist noted: “Artists have always been accused of being decorators, so I just went to the extreme and painted the wallpaper.”[3] Taking the pattern from a decorative carpet as the subject matter, Stingel sprays oil and enamel paint through meticulously positioned stencils creating an expressive, almost lyrical composition.

An important theme in his work, the image of the carpet reflects Stingel’s encounter with the craftsmanship of traditional decorative arts which can be traced back to his early training in Tyrol and Vienna. Interlacing sharply defined elements with areas in which the pattern appears distorted and blurred, the painting conveys the sense of memory and passage of time. Mimicking the fabric worn by human presence, the intricate painterly surface constructs a powerful tension between private and public, unique and mass-produced.

Frequently citing the influence of Dali and Magritte on his own work, Koons here employs associative approach to composition – selecting the images that draw him, the artist creates collages which are later rendered in oil on canvas. Combining the complexity of painterly surface with photorealist precision of the source material, the paintings further blur the boundary between the shared and personal. As the artist explained, “The reason I don’t leave the images in some photographic mode like inkjet is the type of density you can get with pigment, and the sense of warmth. For me, it’s very much about creating a warm feeling that connects with your community – painting these images creates that sense of connection.”[4]

Appropriating readymade images and rendering these in painting, the artists in the exhibition draw attention to the pervasiveness of popular culture, as an implicit and perpetual influence on any individual voice. Featuring visual quotes which lack the original, the paintings speak to the need of taking from the ongoing discourse in order to make something new.