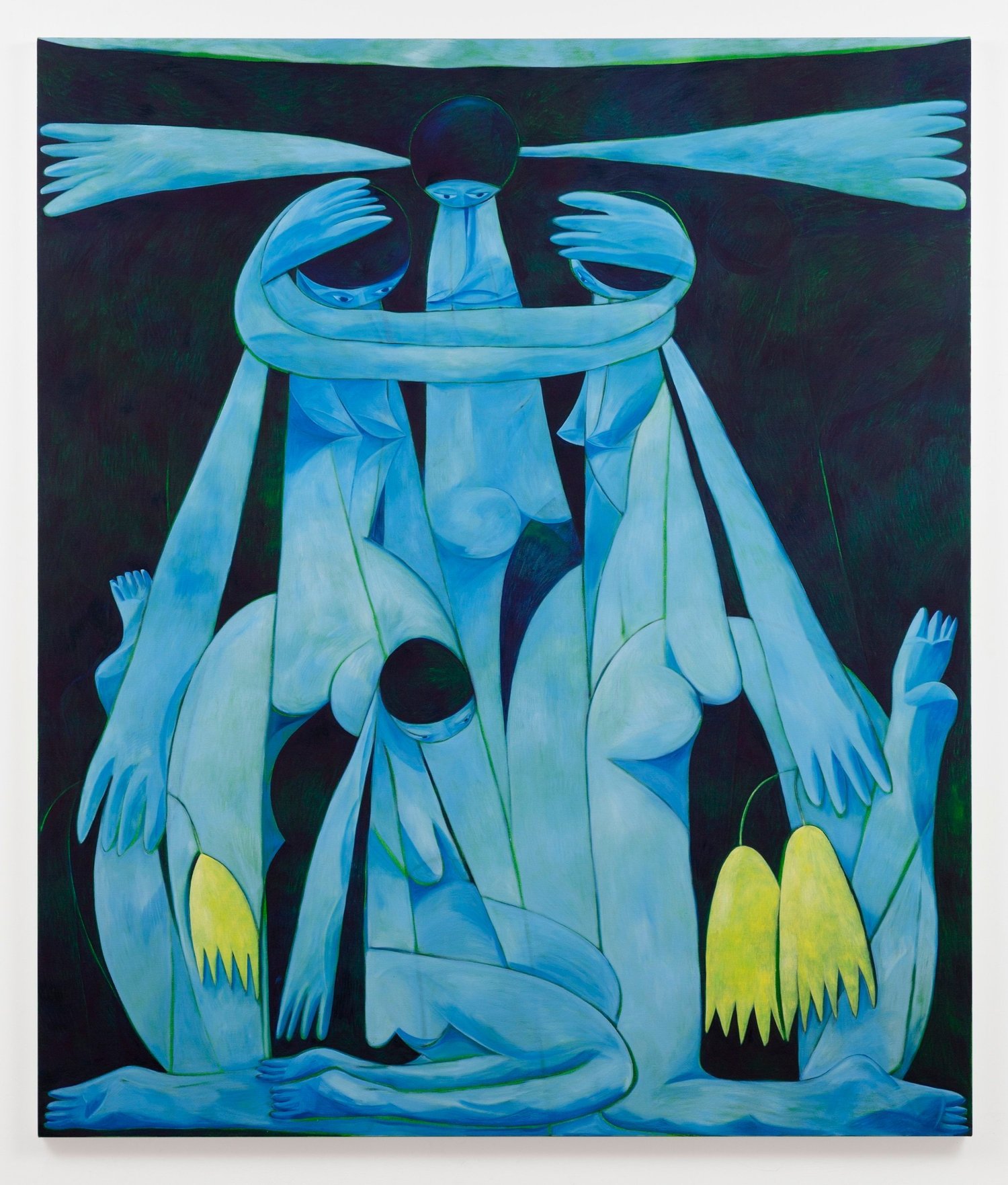 It is a privilege to be swept up in Tahnee Lonsdale’s fantastical narrative tableaux, from the quotidian to the cosmic. Viewers of her work are privy to compositions that convey intimate and passionate extremes while their elements evolve, reflecting the flux of a mental state faced with our changing world.

Recent paintings feature prominently in Lonsdale’s exhibition at Fabian Lang: works illustrating the artist’s engagement with spiritual practices, the metaphysical or mysticism, and the insights they have revealed to her. In parallel, a Kabinett presentation of works on paper offers a whistle-stop survey of the last six years of Lonsdale’s practice, a practice marked by rapid pictorial and thematic metamorphosis.

In Lonsdale’s works, narrative is driven by characters and their interactions, while the formal composition and framing equally build drama. Works on paper from as early as 2016 in this exhibition demonstrate a measured, slightly aloof perspective on domestic settings. (Even earlier works featured an exaggeratedly distant viewpoint, akin to scenes of figures on manoeuvres.) A harmonious, albeit ambivalent, scene features in Living Room Study from 2018: a red figure is embraced by a green sofa with anthropomorphic qualities. At this time the artist was documenting furniture she found on the streets of LA and reimagining it in her own interiors. The furniture and its speculated history are recalled in the sculptural work Flightless, 2022. The dark green velvet body has been exhibited once previously, folded over like the bolsters and cushions of a deep seat; now it is suspended from the gallery ceiling. Motifs, such as the sofas, are carried along in Lonsdale’s works on paper as long as they retain their symbolic effect. Sometimes such motifs serve to temper fierce emotion with humor, such as the baguette seen in Illusion, 2020, that reappears in several other works.

The eleven paintings featured in “Our Humans” relinquish the architectural framework present in Lonsdale’s works on paper. Instead, the works feature cryptic figures that are immensely tall and frame-filling. The artist’s relationship to these divine forms can be understood through a concept of a field of intelligence believed to contain all human thought and action past, present, and future: the Akashic records. The gatekeepers to this realm of energy — ancestors, warriors, or guardian figures — are whom Lonsdale portrays in paintings such as Omens, 2022. She employs centuries-old tropes of religion and power to awaken these spiritual totems: the phthalo blue featured in the early works of the series might be read as a Marian reference – for the cult of female purity. And observing these tall figures from an inferior position underlines a celestial distinction.

It is scarcely surprising that esoteric spiritual practices find resonance today: contemporary life often seems bleak, not to mention how we are continually subjected to a communication overload or the sense that our lives are defined by data streams. Lonsdale presents us with encompassing, yet distant idols; their features become ever more reduced, expressions mournful or ambiguous. Almost all that remains are their watching eyes. In these figures we can find a counterpoint – or critical commentary – to the figures that dominate today. On one hand, some political leaders and their acolytes who demand unflinching loyalty, as if these mortals should be worshipped, while on the other the heroes of the past are challenged and sometimes ripped from their pedestals.

As these dominating bodies morph, elongate and adjust to fill the canvases, they invite reflection on how all-encompassing one’s spiritual or political framework should be. The tense stand-off between the two figures of Psycics, 2022, suggests, in any case, that enlightenment is a dynamic state.