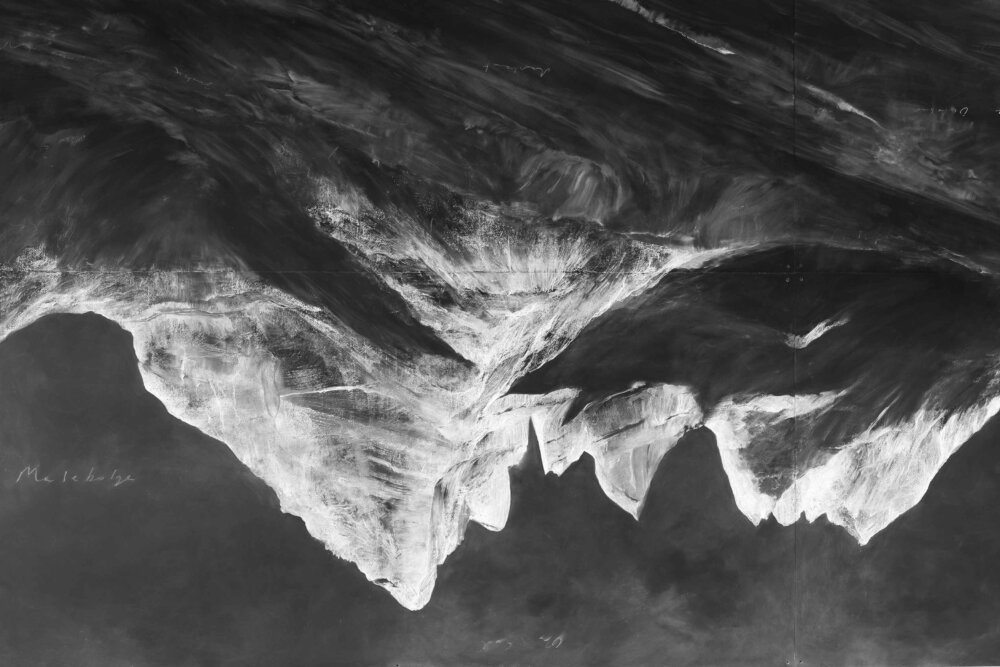 At the Golden Square gallery, the ground floor will feature works relating to Dean’s forthcoming designs for The Dante Project, a new commission by The Royal Ballet set to receive its world premiere at London’s Royal Opera House in October 2021. Based on Dante Alighieri’s 1320 longform narrative poem The Divine Comedy, the ballet is choreographed by The Royal Ballet’s Resident Choreographer Wayne McGregor and features a new composition by conductor-composer Thomas Adès. Dean’s sets move from the stark black-and-white negative backdrop for Inferno, through the strange, transitional state of Purgatorio before emerging into a celebration of colour in Paradiso, the final act.

A vast, eight-panel monochrome photogravure covers an entire wall of the gallery. As with the artist’s backdrop for Inferno, the print depicts an inverted mountainous terrain in negative, using silver ink, collaged elements and differing sized black circles – a reference to Botticelli’s drawings of the same subject – to signify Dante and Virgil’s descent through the nine circles of hell. For Purgatorio, Dean has made large-scale photographs of the negatives of jacaranda trees, which she photographed while in Los Angeles. The trees, which bloom May–June in hot climates, are remarkable because the entire foliage turns into purple blossoms, without any sign of leaves. Printing her photograph as a negative, Dean saw that the purple became an otherworldly green. The background streetscape has been muted by white coloured pencil worked over the photo’s surface. Paradiso is represented by a set of ten handprinted screen prints developed from film stills taken from the 35mm film the artist created for this movement in the ballet. The prints are expressions of pure, almost hallucinatory colour, each one relating to a different heavenly body through which Dante described Paradise in his poem.

In the lower gallery, Dean is showing a new film called 150 Years of Painting. The 50-minute 16mm film takes the form of a conversation between the artists Julie Mehretu and the late Luchita Hurtado. As a result of her friendship with both artists, Dean realised they shared a birthday and that in 2020, Mehretu would turn 50 on the same day that Hurtado would turn 100. Both fabulous women and great painters, Dean took advantage of the fact that everyone had gathered for the new year in Los Angeles. She filmed them both discussing their lives and their painting, with brief interventions from Hurtado’s son, the artist Matt Mullican.

At the Soho Square gallery, the two works on display both come out of Dean’s time spent as artist-in-residence at The Getty Research Centre, Los Angeles, 2014–15.

The ground floor space is devoted to a new edition, conceived as ‘an exhibition in a box’, entitled Monet Hates Me (the title comes from the artist’s discovery of a letter from Claude Monet to Camille Pissarro where his handwriting appears to read ‘hate tacita’). The edition emerged from Dean’s initial project, which was entitled The importance of objective chance as a tool of research, which meant allowing chance to guide her research. On her first visit to the collection, she pointed randomly to a cardboard box on a high shelf, which turned out to contain the key to Auguste Rodin’s studio entrance in Hôtel Biron in Paris, and this initiated the project.

During the COVID-19 pandemic lockdowns, between March and December 2020, Dean worked with her long-time friend and collaborator Martyn Ridgewell. Working remotely in Berlin and Cornwall, they designed and produced the objects, often sourcing materials and facilities locally. As a result, many of the objects are not commercially produced but made by hand. Among the fifty objects is the forged signature of Christian Dotremont, a long-dead Belgian surrealist, on a postcard; a letterpress copy of Piet Mondrian’s carte de visite, hand-corrected by Dean to match a pencilled correction on the original; Fluxus artist George Brecht’s Stamp Out Stamping stamped on vintage index cards; a vinyl record of Dean reading a montage of text fragments collated from her working photocopies; and ‘a foot of feet’ – a foot-long strip of film made of sixteen frames of found images of feet. The edition is signed and numbered in the front of Object 1, which is a small book. The book also acts as the key to the provenance and manufacture of the other 49 objects.

Shown in the lower gallery is Pan Amicus, a 31-minute 16mm film, which was commissioned in celebration of twenty years of the Getty Center’s Richard Meier building. The work was filmed entirely on the estate of the Getty Center and Villa, though the building itself never in fact appears. J.P. Getty himself loved Roman and Greek classical culture and the Getty Villa and surrounding landscape beguiles the visitor into imagining they are elsewhere, perhaps in Arcadia. Dean says the emotional reference for the piece is the celebrated chapter “The Piper at the Gates of Dawn” from Kenneth Grahame’s The Wind in the Willows (1908). Getty lent some of their objects to be in the film.

The Dante Project will run 14–30 October at the Royal Opera House, London. Tacita Dean’s large scale blackboard drawing Inferno will be shown in the ROH’s Paul Hamlyn Hall from September 2021 to April 2022.