“The subject in search of syncope does not want to escape from time,
but from a part of itself that denies it access to intimacy”
– Catherine Clément 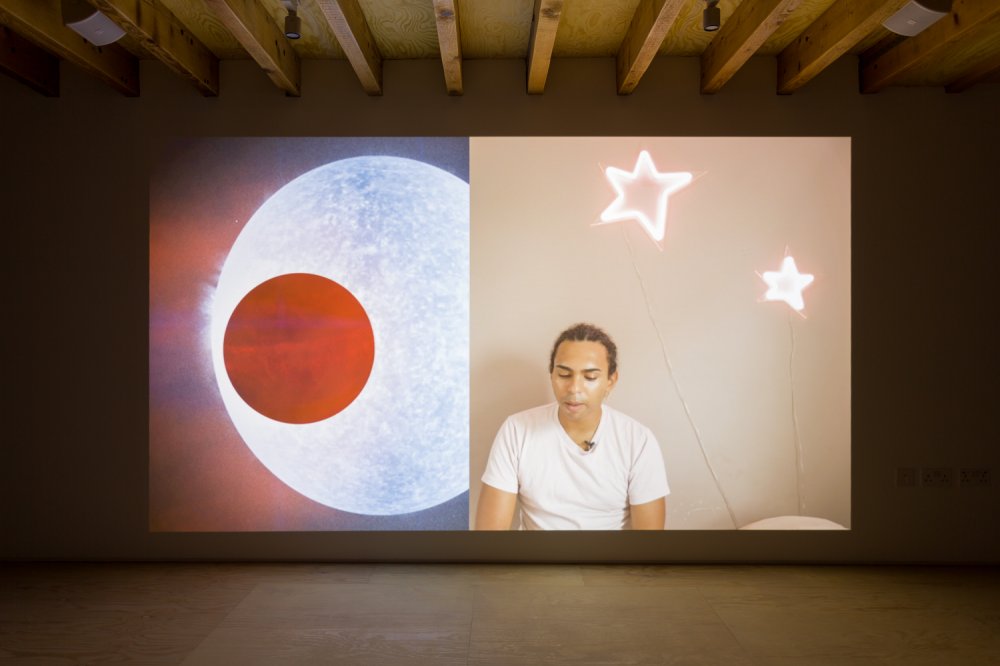 Video
32 minutes
Courtesy of the artist. Photo by Tim Bowditch 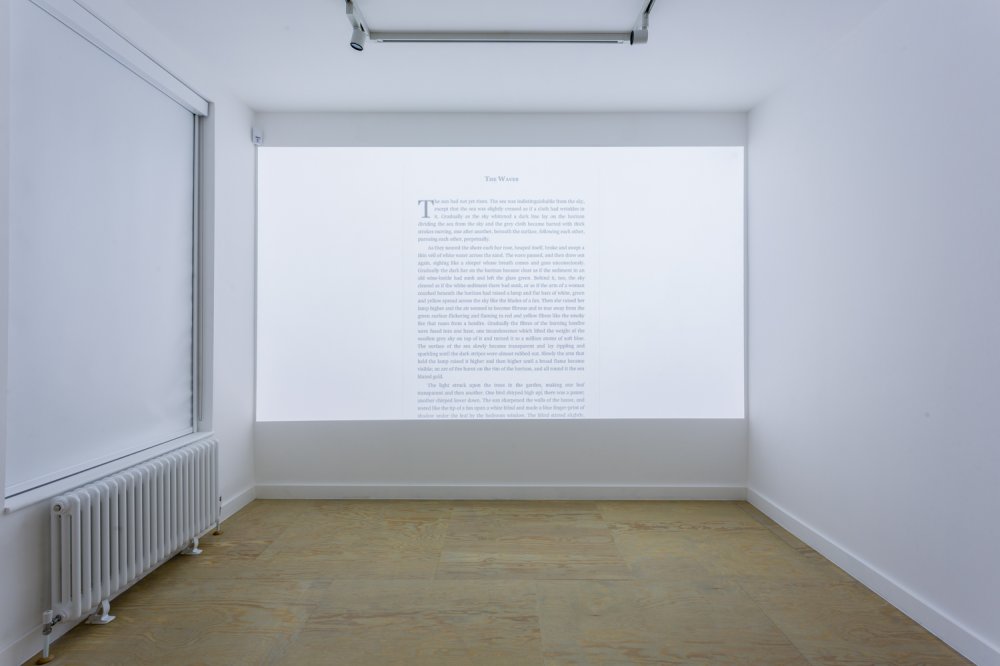 Himali Singh Soin
The Particle and the Wave, 2015

Video
13 minutes
Courtesy of the artist. Photo by Tim Bowditch 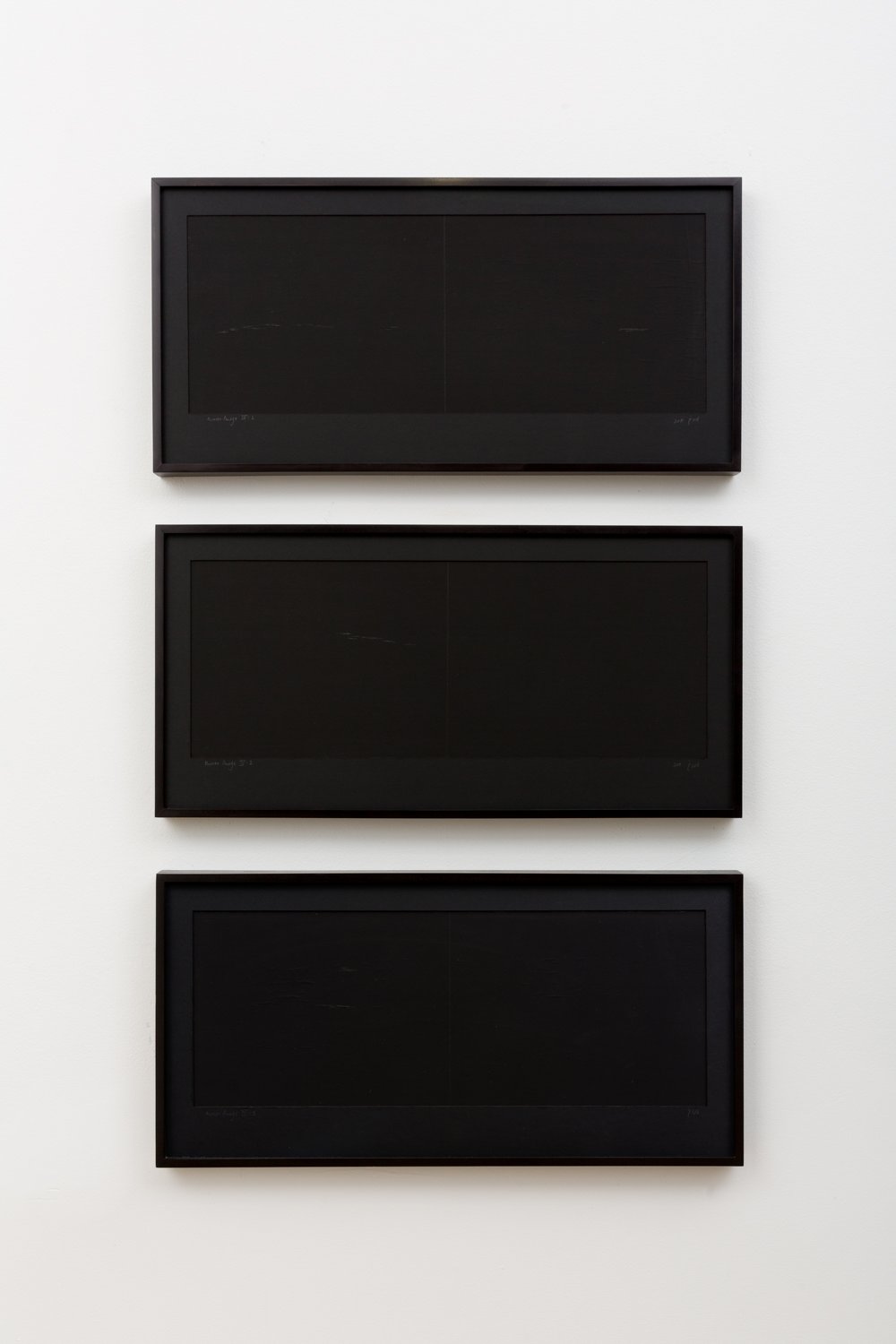 Graphite on carbon paper
Courtesy of the collection of Hetal Pawani and Grey Noise, Dubai. Photo by Tim Bowditch 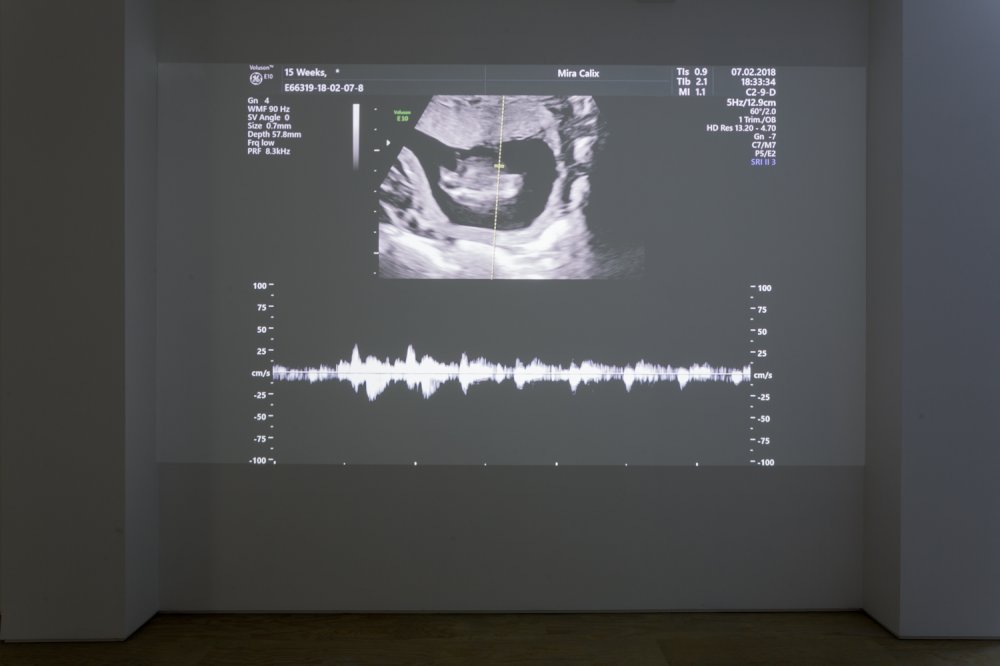 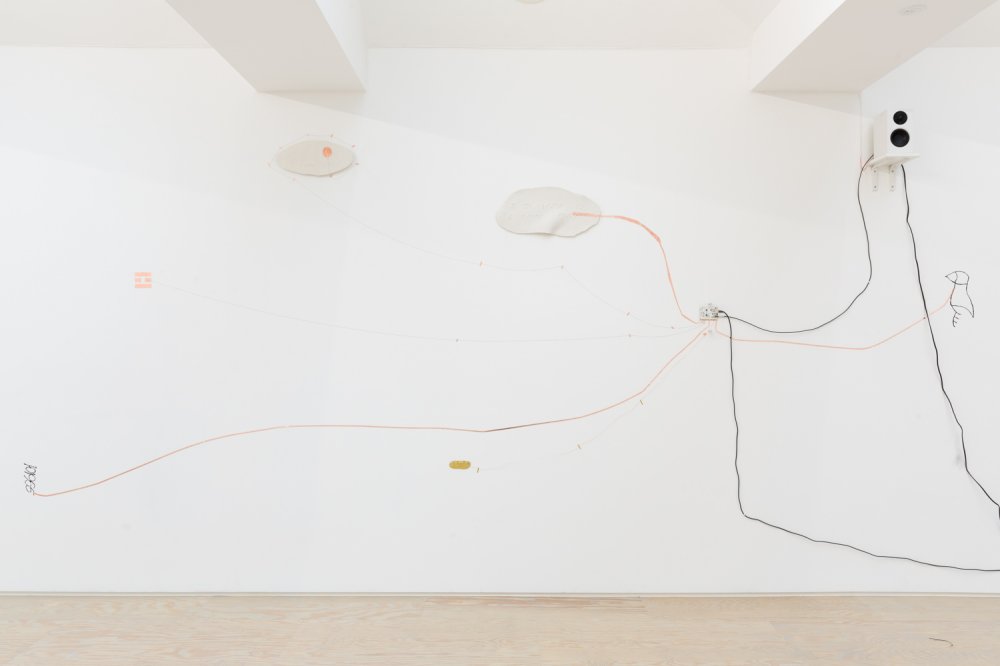 Qian Qian
People should listen to the birds’ flight, 2018 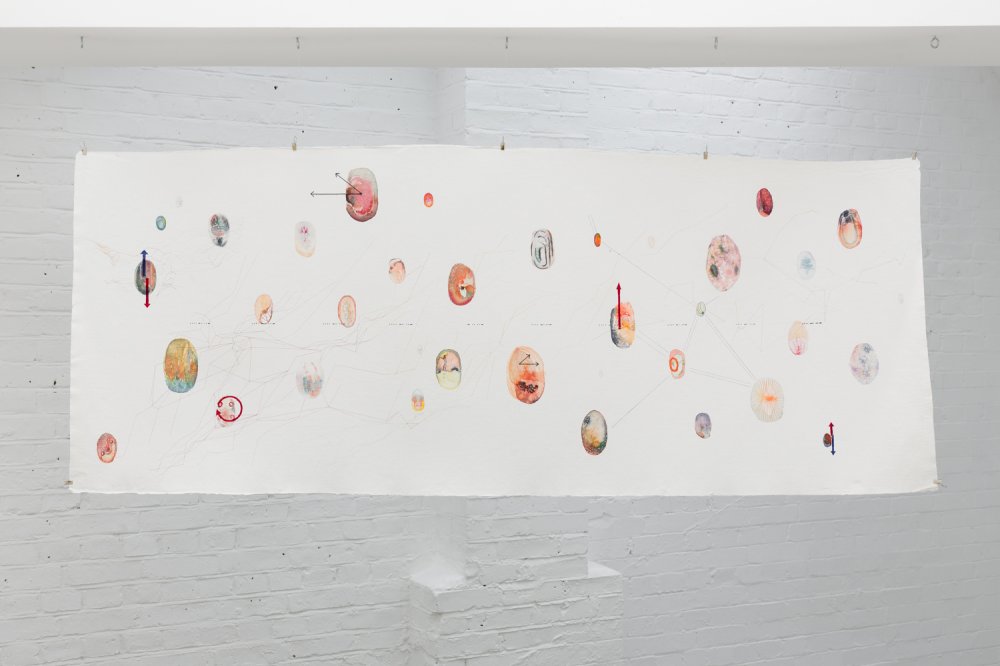 Watercolour on paper
200 x 60 cm
Courtesy of the artist. Photo by Tim Bowditch 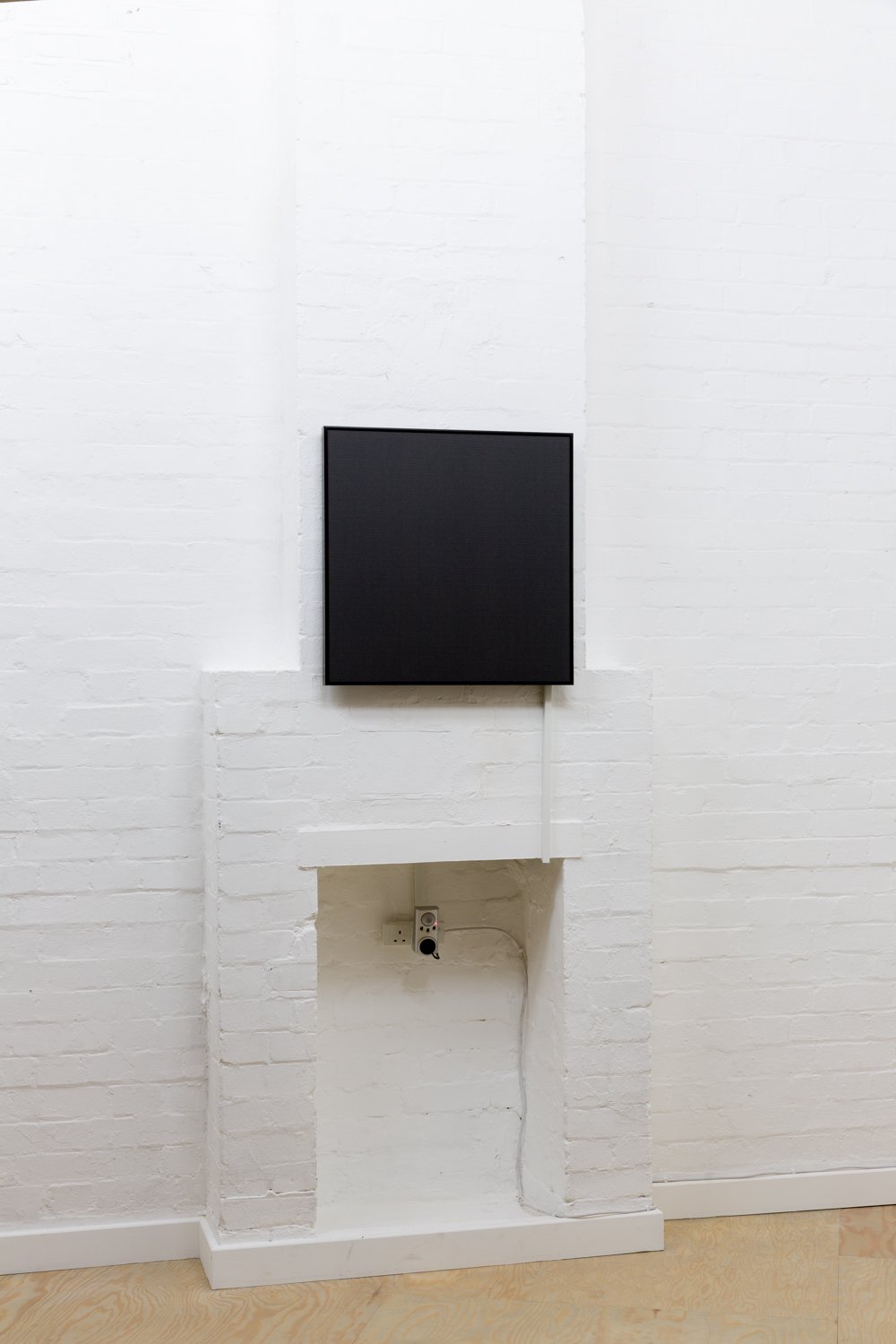 Ruth Beraha
A long long time ago in a galaxy far away, 2019 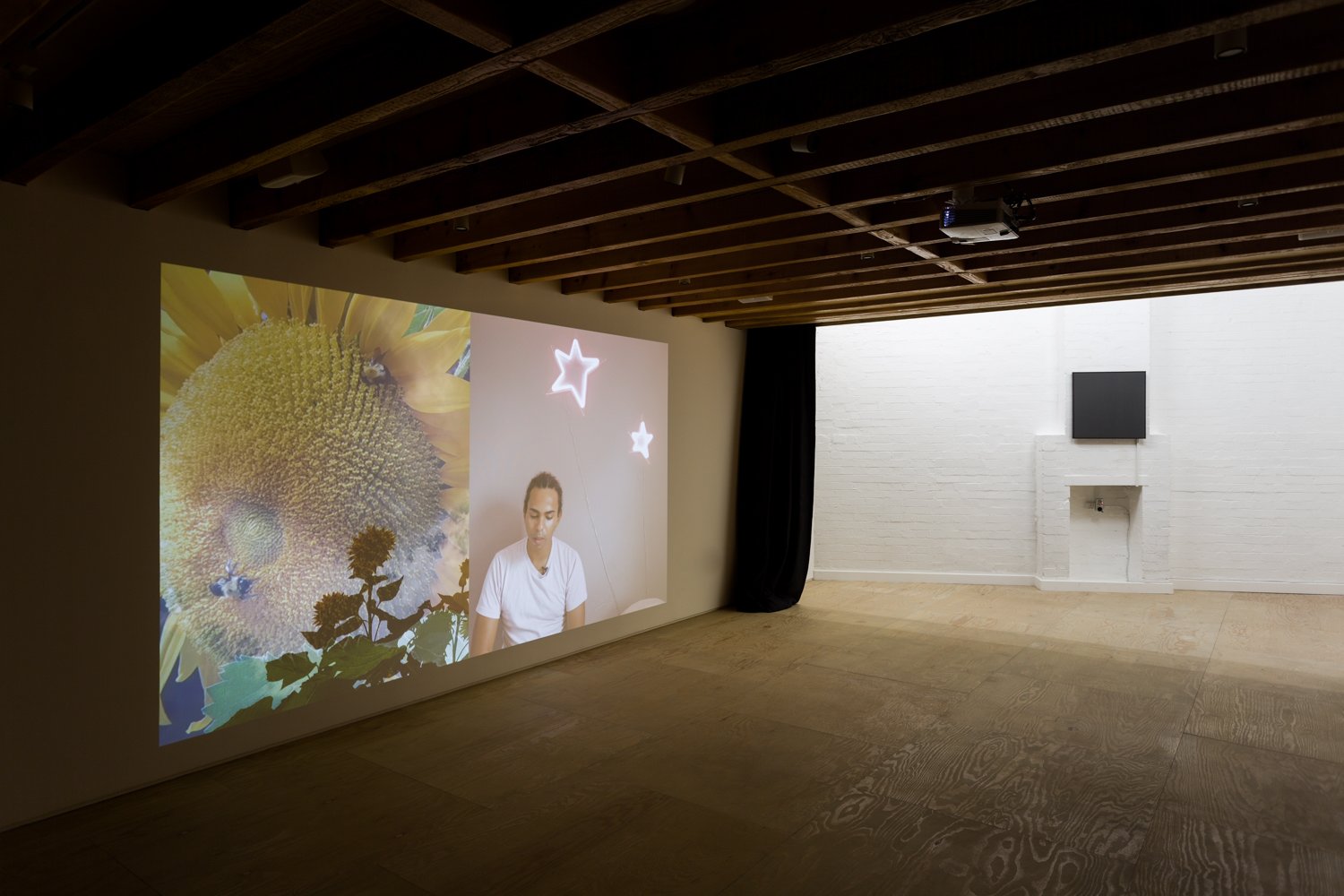 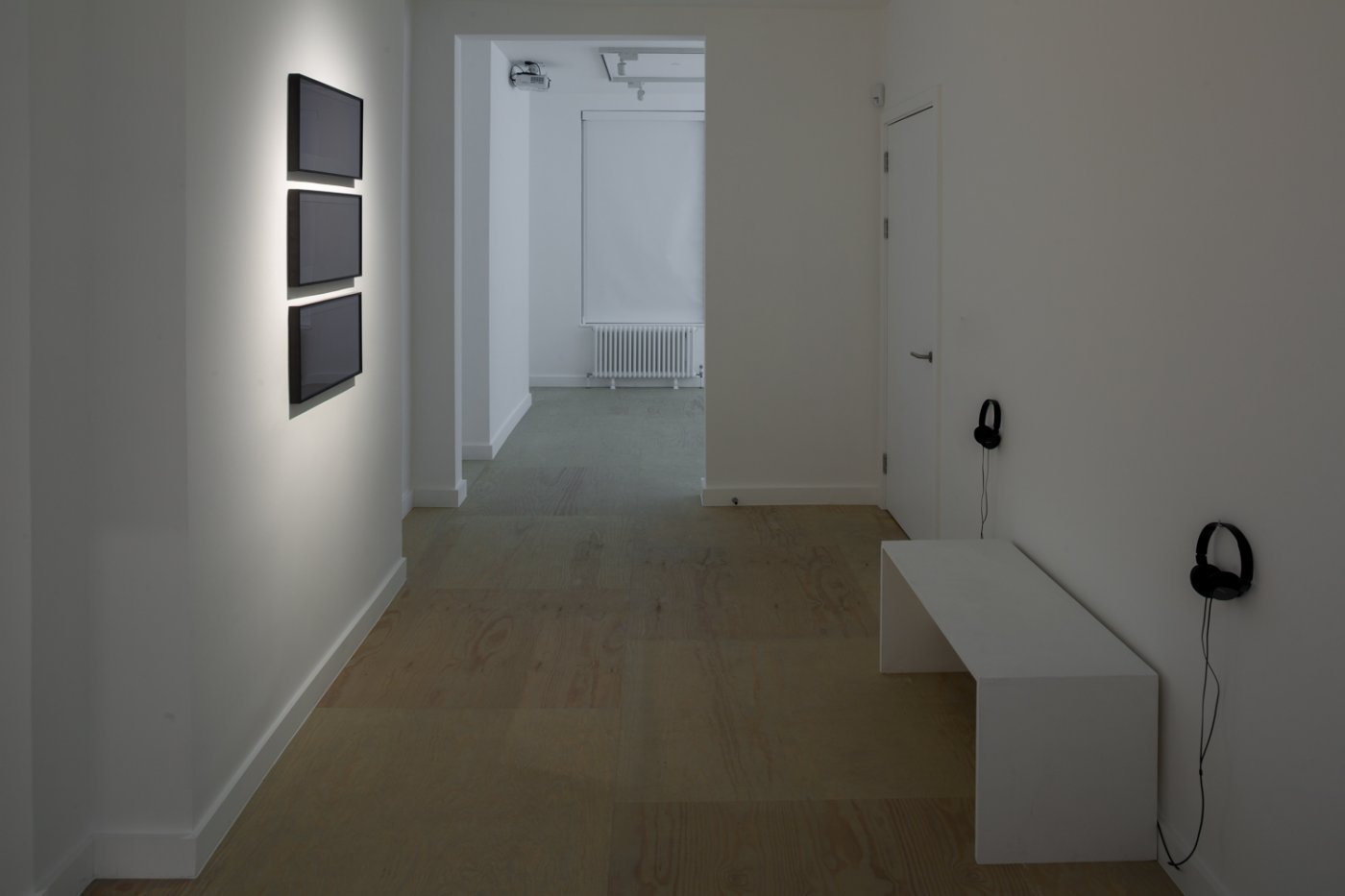 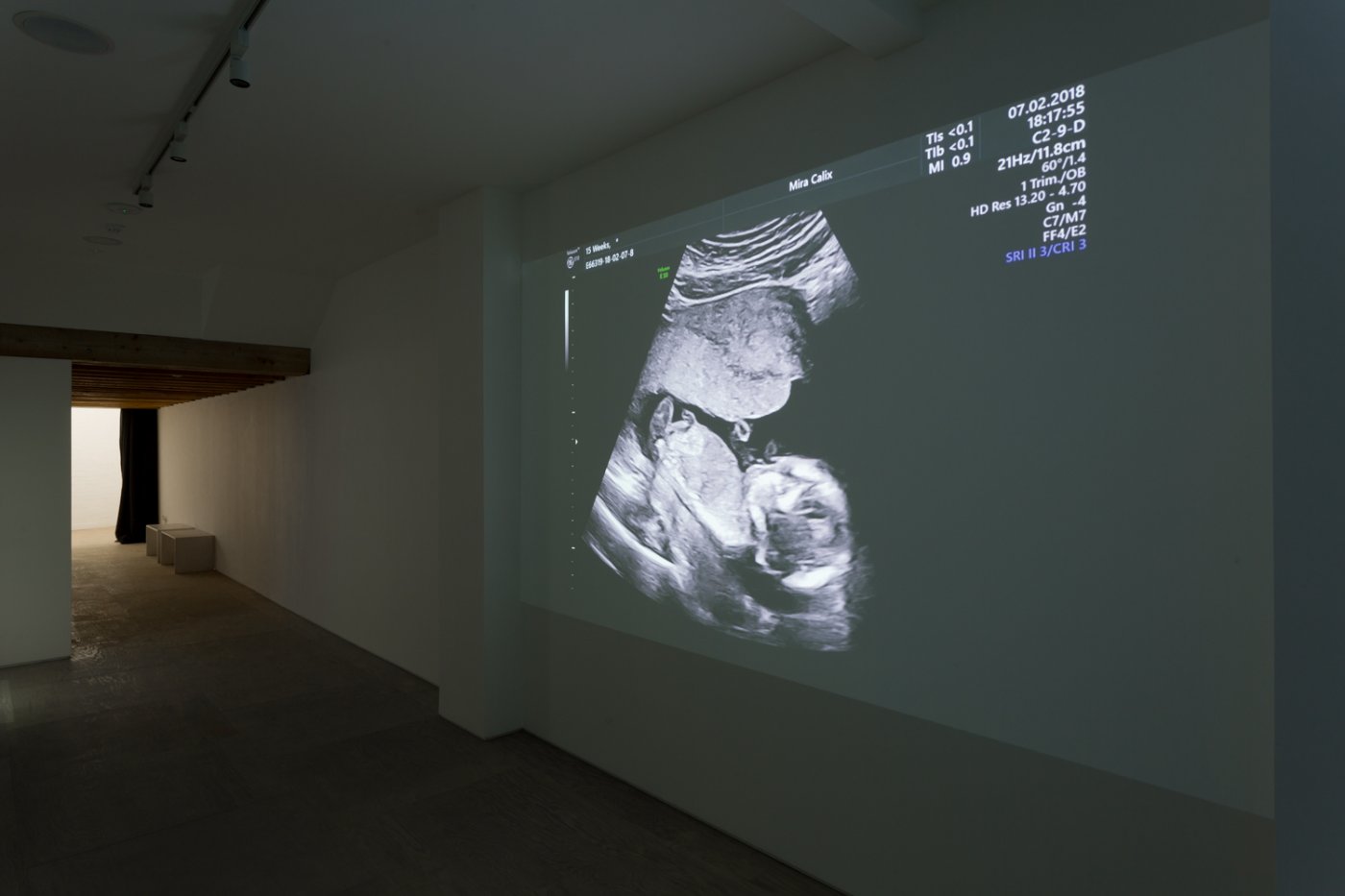 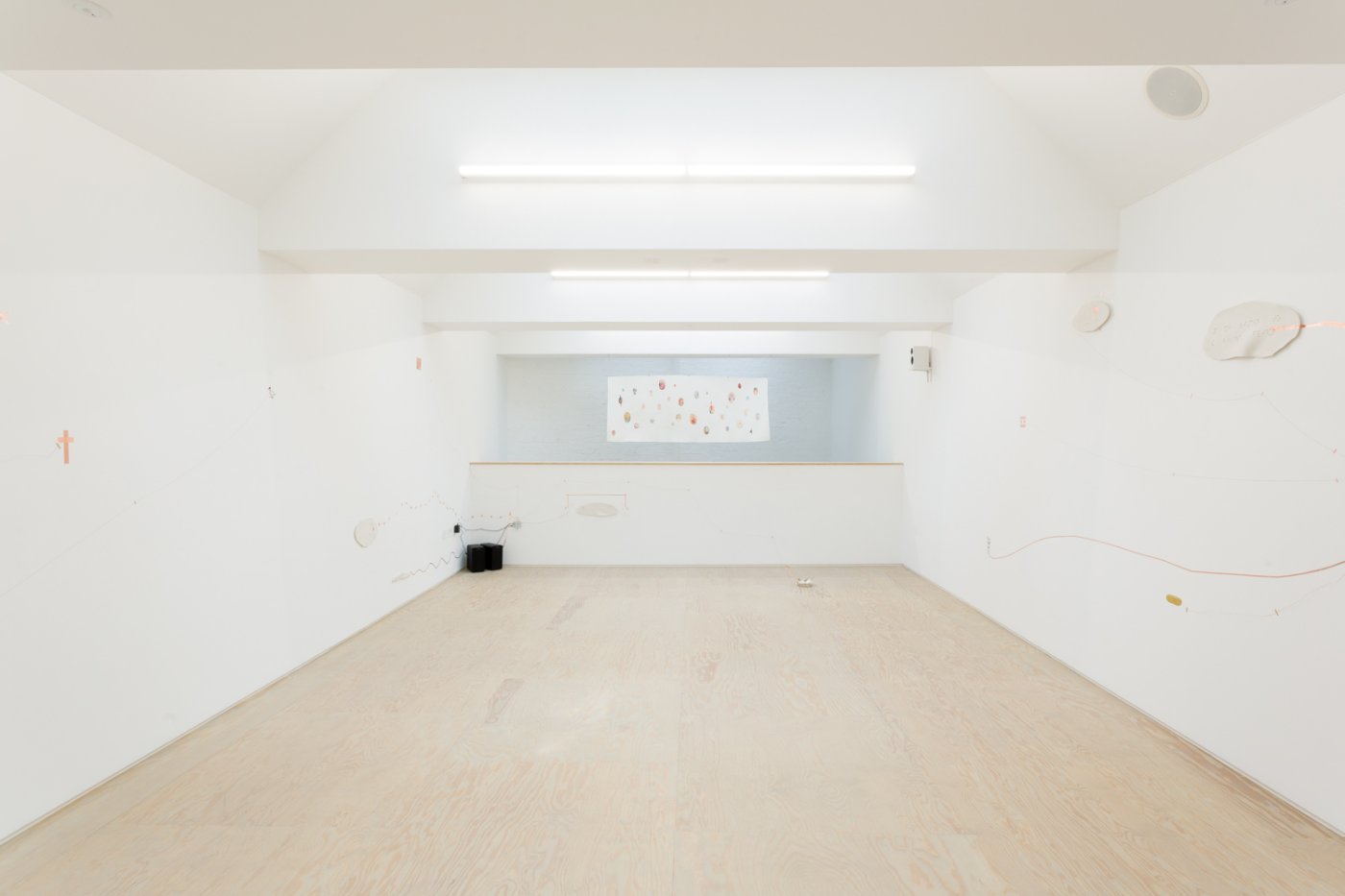 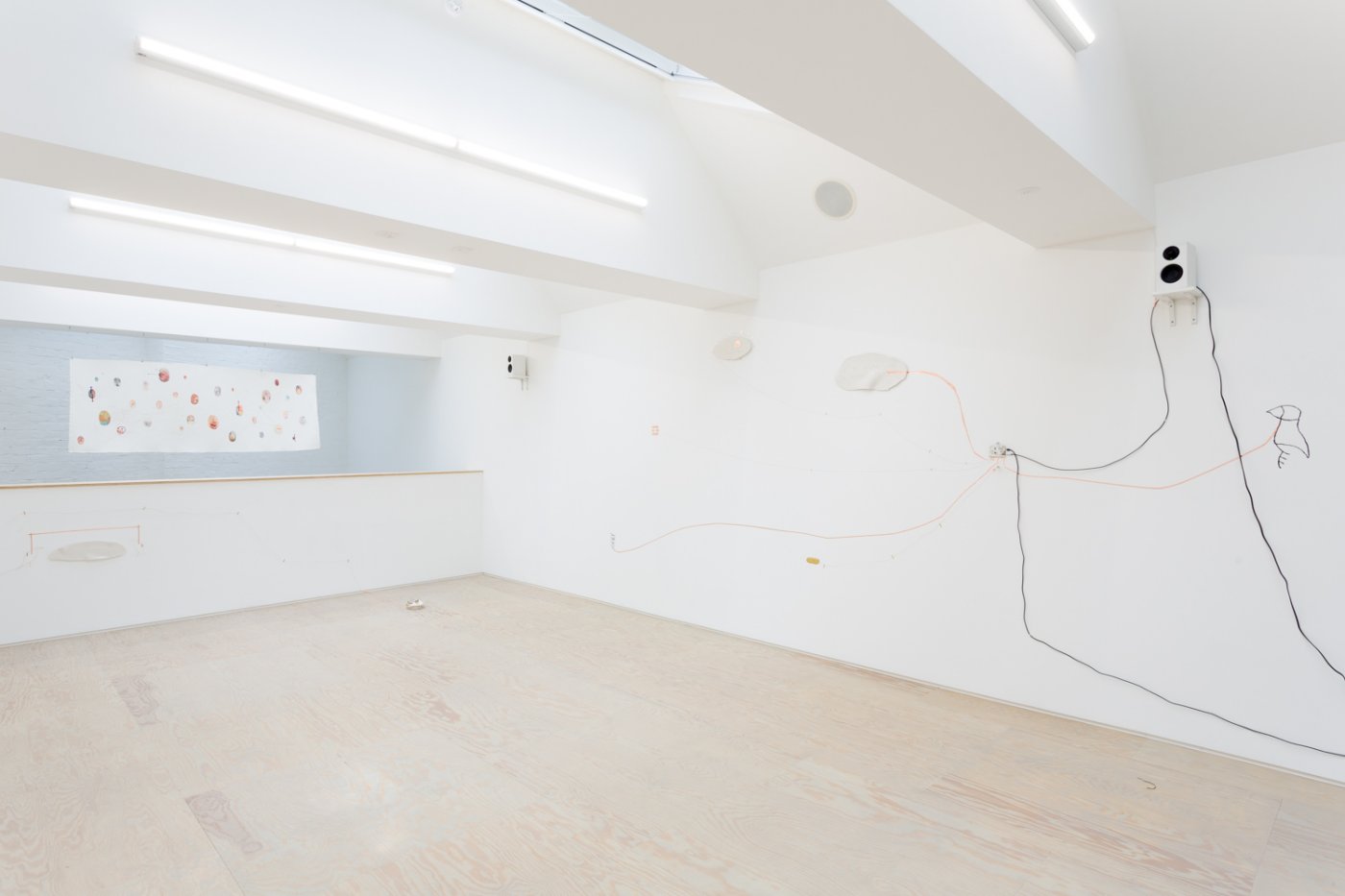 A syncope is a multi-format ‘tender interval’ which can be described in music as an unstressed ‘empty’ beat which interrupts the expected rhythm; in linguistics as the suspension of a syllable, or a letter; in medicine as a partial or complete loss of consciousness. In this exhibition, syncope acts as a metaphor for rapture, delay, lacunae, and displacement. In the current condition of suspension and global standby, the syncope morphs into a series of new meanings, while reinstating the necessity of a break from growing pressures and acceleration.

The artists in the show will experiment with transcribing and anatomising sound, language and image. By employing algorithms and working through musical scores, the artworks attempt to capture time, measure closeness, and practice resistance, silence and deep listening.

In the sound piece 16 Weeks (2018), award-winning artist and composer Mira Calix employs the technology of ‘sonification’ to trace the ultrasound-recorded movement of a foetus in utero. Sonification – the practice of mapping data to produce sound signals – is used here to translate the random, free movement of the foetus into a sound piece, performed by an orchestra.

Frieze Artist Award 2019 winner and current Writer in Residence at Whitechapel gallery, Himali Singh Soin’s The Particle and the Wave (2015) is a study of the rhythmical pattern of Virginia Woolf’s novel ‘The Waves’, working through the novel by erasing the text and leaving only the semicolons behind as hinges to measure time and proximity.

The recent Goldsmiths MFA Fine Art graduate Qian Qian’s interactive installation People should listen to the birds’ flight (2018), (inspired by ancient Chinese mythological narratives) presents braille codes alongside environmental sounds which are activated by touch. This is paired with a large scale watercolour visualising the movements and entanglements of quantum particles.

A newly commissioned film by DJ, voyager and artist Chooc Ly Tan, features interviews with interdisciplinary practitioners on the subject of ‘syncopation’ in sonic, spatio-temporal, and culinary experiences. The interviews’ narrative is interwoven with Voguing elements, culturally referenced as instrumental in diasporic resistance.

One of South Asia’s leading activists and artists, Lala Rukh’s (d. 2017) series Mirror Images (2011) depicts reverberations of water, condensing the artist’s participation in social uprisings and practice of close listening into the minimal marks on paper. Subh-e-Umeed, 2008, which translates as “Expectation”, is a sound piece featuring recordings from the artist’s everyday environments. The recordings closely trace the course of Rukh’s day: the birds were recorded during her early morning walks in the nearby park; in the afternoons after teaching at the National College of Arts in Lahore, Rukh attended protests, during which she recorded the slogans of activists.

A long long time ago in a galaxy far away (2019) by multimedia artist and recent resident of the Italian Academy at Columbia University (NY), Ruth Beraha warps the legendary Star Wars’ soundtrack into a vaguely familiar cacophony, suggesting a scenario for a grim end and declaring the need for change in the established order.

What lies behind the erasures, the empty beats, omitted words, sonic splits and dissonant melodic patterns? The syncope opens up a potential for transformation, dissent and upheaval, in an attempt to restore our connectedness.