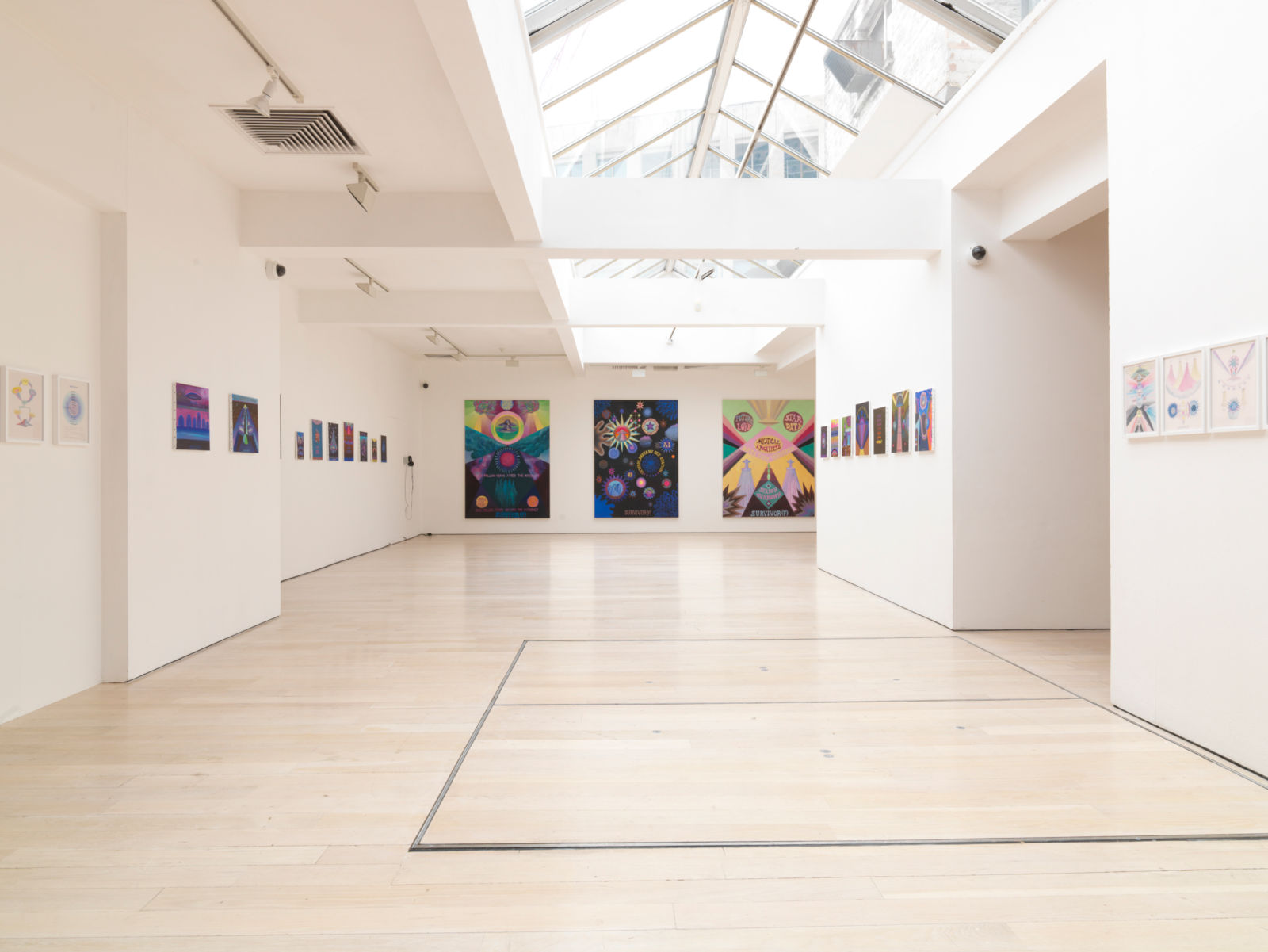 Treister has been a pioneer in the digital/new media/web-based field from the beginning of the 1990s, making work about emerging technologies, developing fictional worlds, and international collaborative organisations. Often spanning several years, her projects comprise fantastic reinterpretations of given taxonomies and histories. An ongoing focus of her work is the relationship between new technologies, society, alternative belief systems and the potential futures of humanity.

SURVIVOR (F) and The Escapist BHST (Black Hole Spacetime) began as two independent projects until one day a portal opened between them, located somewhere inside a painting of an imaginary museum in outer space. In the exhibition the two projects are divided by a physical portal between the two main galleries.

Consisting of watercolours, diagrams, digital works and videos, From SURVIVOR (F) to The Escapist BHST (Black Hole Spacetime) draws on recent research in artificial intelligence and astrophysics to create a hallucinogenic imagining of spaces of human and non-human understanding within and beyond those of contemporary science and technology.

SURVIVOR (F) is a hallucinogenic exploration of a future reality in undetermined time and space. Whether manifestations of a survivor of the human race, on earth, in space, on a new planet or parallel universe, or of an artificial superintelligence (ASI), SURVIVOR (F) presents visions of a post-futuristic sublime, charting an existential imaginary of potential human/non-human agency/non-agency, of the psychedelic consciousness of SURVIVOR (F).

The Escapist BHST (Black Hole Spacetime) is a non-specific interplanetary entity whose depicted experiences are a poetic imagining of spaces of understanding within and beyond those of contemporary science. The Escapist BHST project also includes a group of works which envision intelligent life forms on other planets, drawn and painted by scientists at CERN, Geneva.

The Escapist BHST (Black Hole Spacetime) is a digital commission by Serpentine Galleries, London, and will be simultaneously accessible online through a ring of sky based portals in Augmented Reality (AR) which can also be downloaded and set as desktop images on computer screens, tablets and phones. From SURVIVOR (F) to The Escapist BHST (Black Hole Spacetime) is also published as a fully illustrated book by Serpentine Galleries Koenig Books, London (copies available).

The exhibition will also include a group of paintings by the artist’s 92 year old mother, June Treister, of black holes in various locations around the planet.

From Survivor (F) to The Escapist BHST (Black Hole Spacetime) is a fully illustrated publication that draws on extensive research into artificial intelligence, cosmology and theoretical physics and brings together two bodies of work in a cosmic trip through a potential future of humanity and the universe. The mobile web app, The Escapist BHST (Black Hole Spacetime), will allow users to enter Treister’s work in the sky through a ring of AR portals. More details about the launch and forthcoming Serpentine events will be announced over the coming weeks, information can be found here.

Courtesy of the artist and Annely Juda Fine Art, London