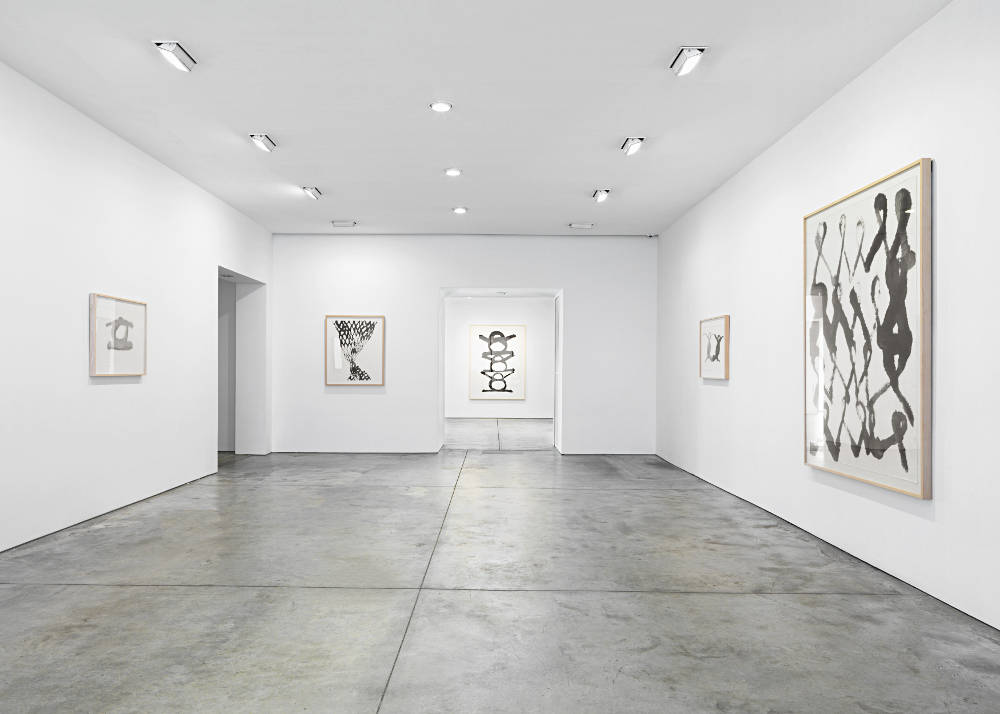 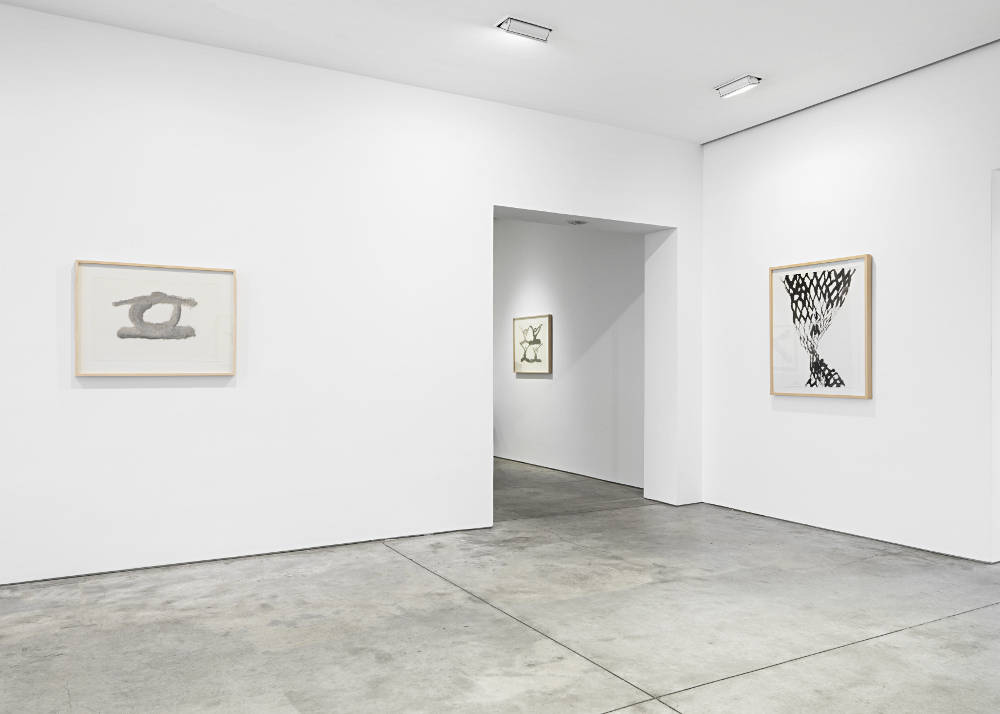 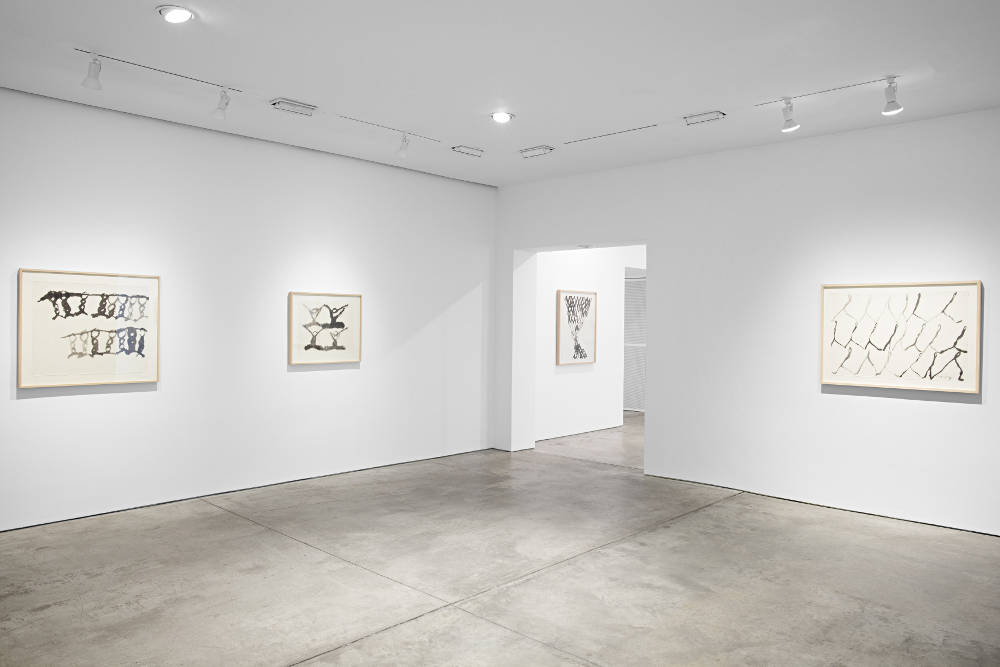 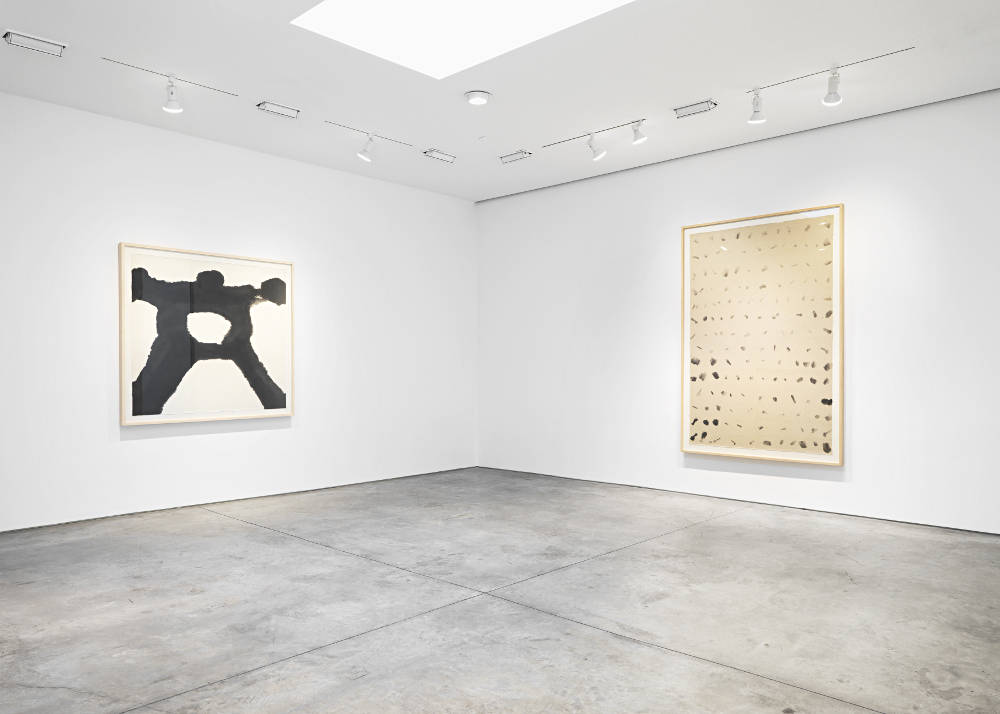 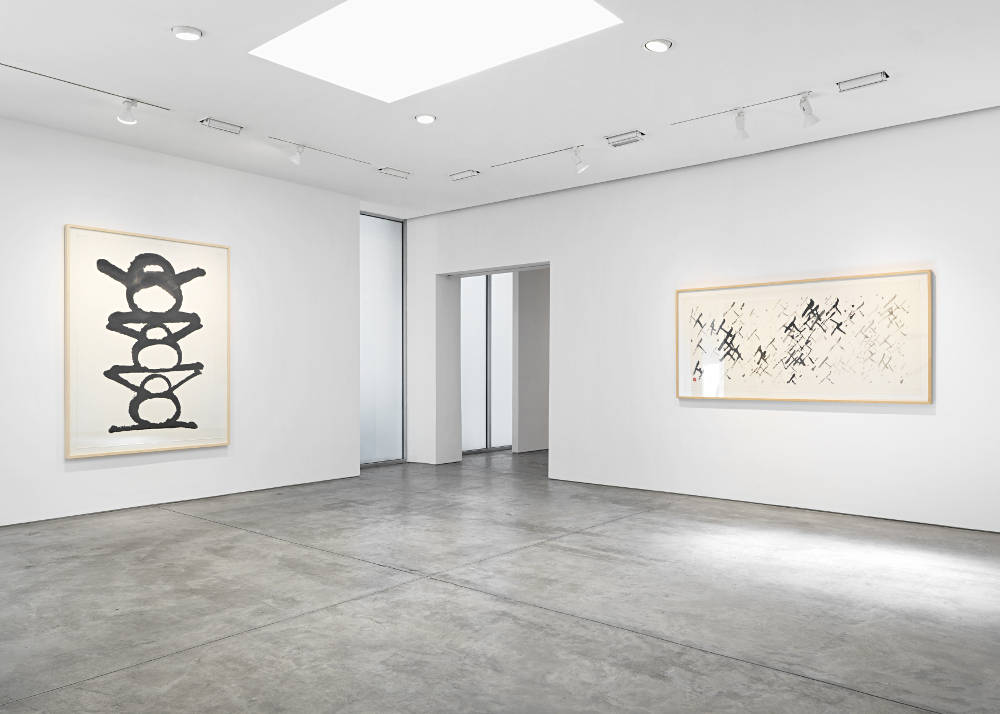 The 89-year-old South Korean artist exhibits a number of works from People, his ongoing series of ink paintings produced between the 1960s and the 2000s. Made with extended brushes on large sheets of rice and mulberry paper, the works depict highly stylized human figures constructed from dashes and linear strokes that vary in scale, thickness, and tone. Each painting is made quickly, but only after an extended period of contemplation, and the result has a quiet but focused visual poetry that rewards repeated looking.

As a classical technique, ink painting has long been distinguished by certain conventions. But beginning in the 1950s, Suh Se Ok began adapting the elements of what is known as “literati painting” called Muninhwa, derived from calligraphy and poetry and traditionally practiced by noble scholars. In this approach, Suh Se Ok developed a new, progressive and abstract visual language that refused the modernist spirit of heedless novelty in favor of one that also embraced and expanded on historical precedent. Suh Se Ok’s initial approach to the medium was then disruptive, but was also marked by great sensitivity and intelligence. Neither was he alone in his emphases; in 1959, he formed a group called the Mungnimhoe, or Ink Forest Society, which strived for unique styles of experimental ink painting that had its roots in literati painting.

Stripped of all color, detail, and perspectival space, the radically restricted painterly practice that Suh Se Ok and his contemporaries developed allows for a broad range of interpretation. His paintings occupy the border between figuration and abstraction, and while the People series in particular clearly references the human form, the artist has also characterized the works as alluding to “shadows on the stage of life” (in Korean, geu-rim-ja)—its ordinarily invisible pains and pleasures. Some of his images also exhibit a similarity to Korean ideographs; as an erudite literati painter raised in a family of classical scholars, Suh Se Ok is an accomplished philosopher, poet, calligrapher, and seal engraver. There is even a political element to his works’ stark appearance—Suh Se Ok and the other Mungnimhoe artists grew up under Japanese occupation, and initially regarded their confrontational vision as an explicit challenge to the traditional Japanese nihonga painting dominant at the time.

Visually, while Suh Se Ok’s technique and medium are outwardly simple, the artist manages to produce a surprising variety of marks, while also allowing ink’s inherent qualities to guide his hand. Though his works of the 1960s often make use of the liquid’s tendency to spill and spread across the paper, those of the following decade reveal the artist’s increasing focus on planning and control, as well as an absorption in the potential of negative space. “I paint the forms that I find in the infinite space beyond objects,” he has stated. “What is there and what is not there are in a constant cycle.” In this, they also share a sensibility with the Zen painting of artists such as Mu-ch’I and Bada Shanren.

The ’60s also marked the genesis of Suh Se Ok’s ongoing People series, in which the artist’s feeling for abstract mark-making is fused with a fascination with patterns and motifs of social interconnectedness. In the range of subjects and emotions they address, these paintings suggest a need to move beyond an either/or view of humanity and the world, and to acknowledge that our bodies are also part of the universe at large. The degree of stylization that Suh Se Ok employs makes it impossible to categorize his figures as any specific age, race, or gender; they transcend time and culture. Their positions and gestures are also open to interpretation, even within a single image. A group of dancers, for example (a favorite subject), could also be a crowd of protestors, or even—such is their degree of simplification—waves on the ocean or bricks in a wall. As the works in this exhibition demonstrate, Suh Se Ok has achieved—and continues to add to—a very rare artistic corpus, which is truly timeless.