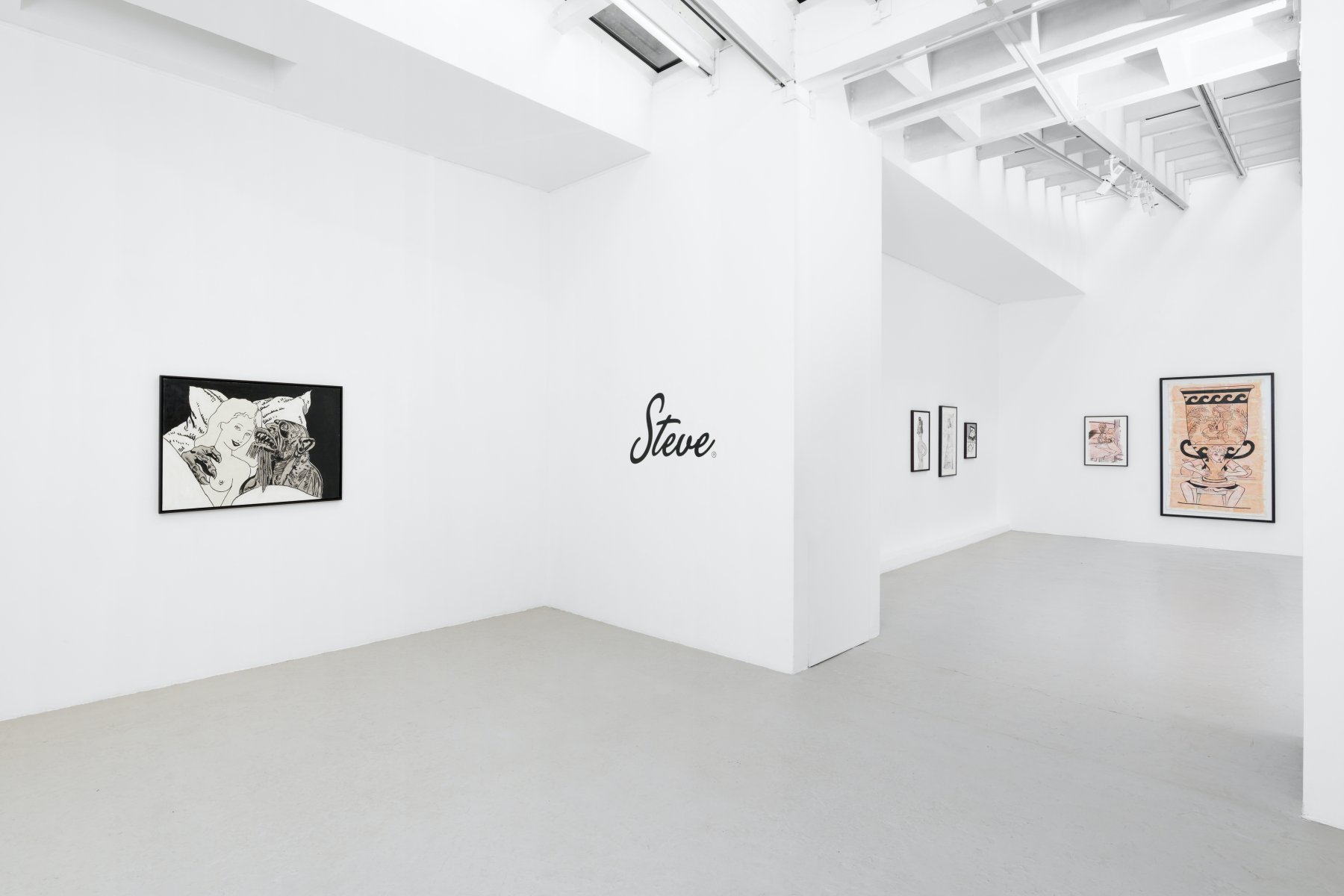 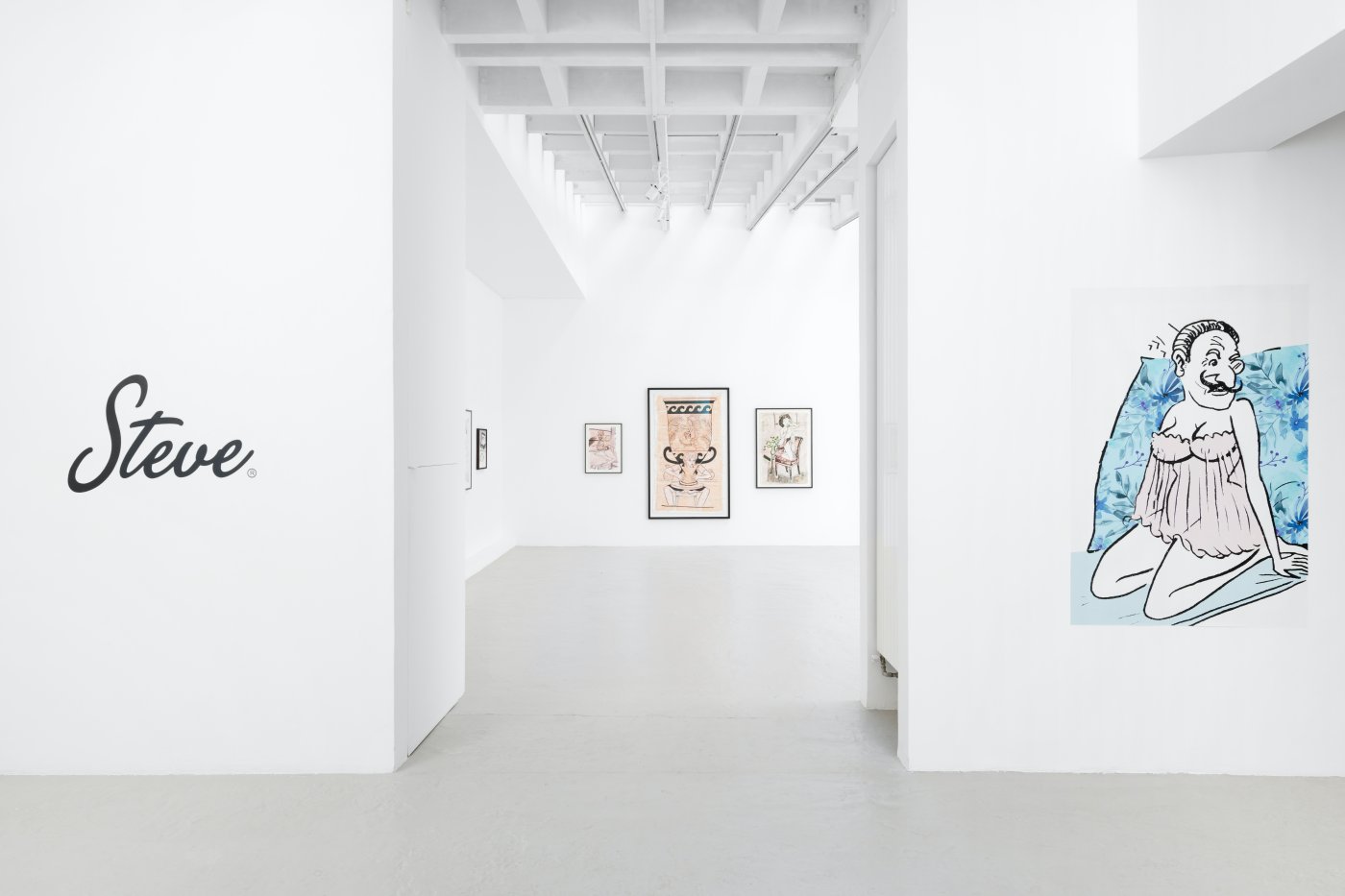 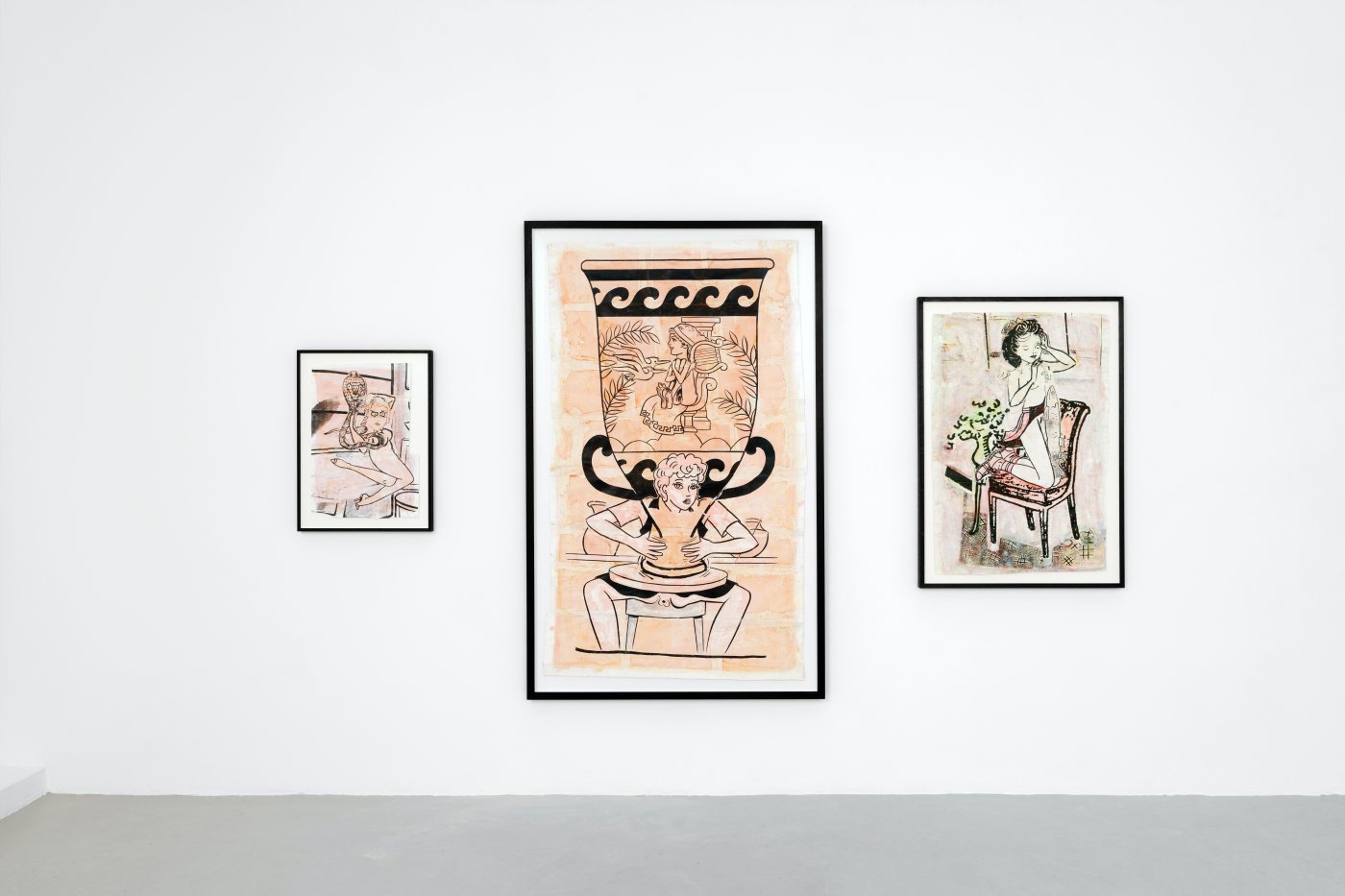 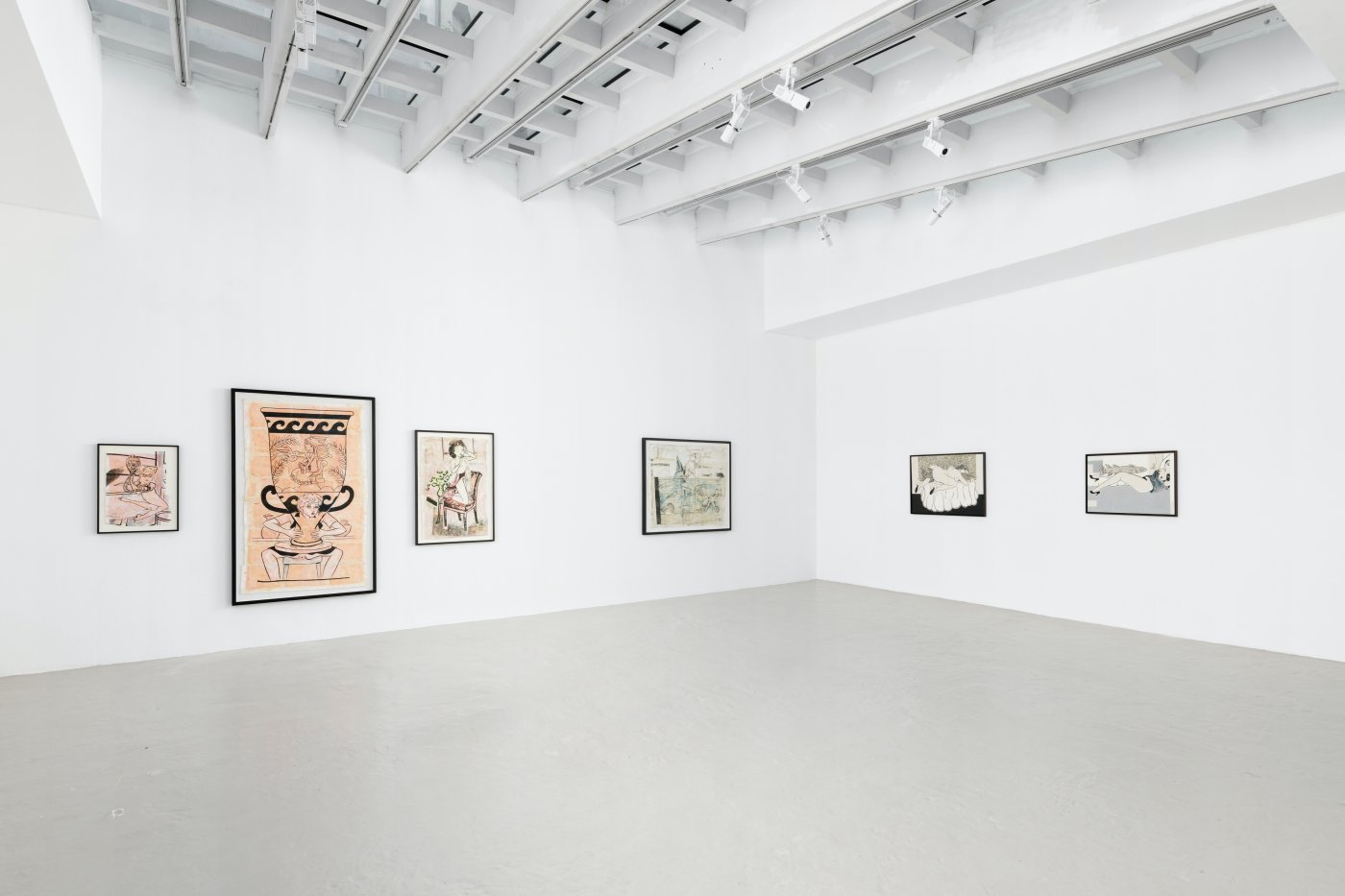 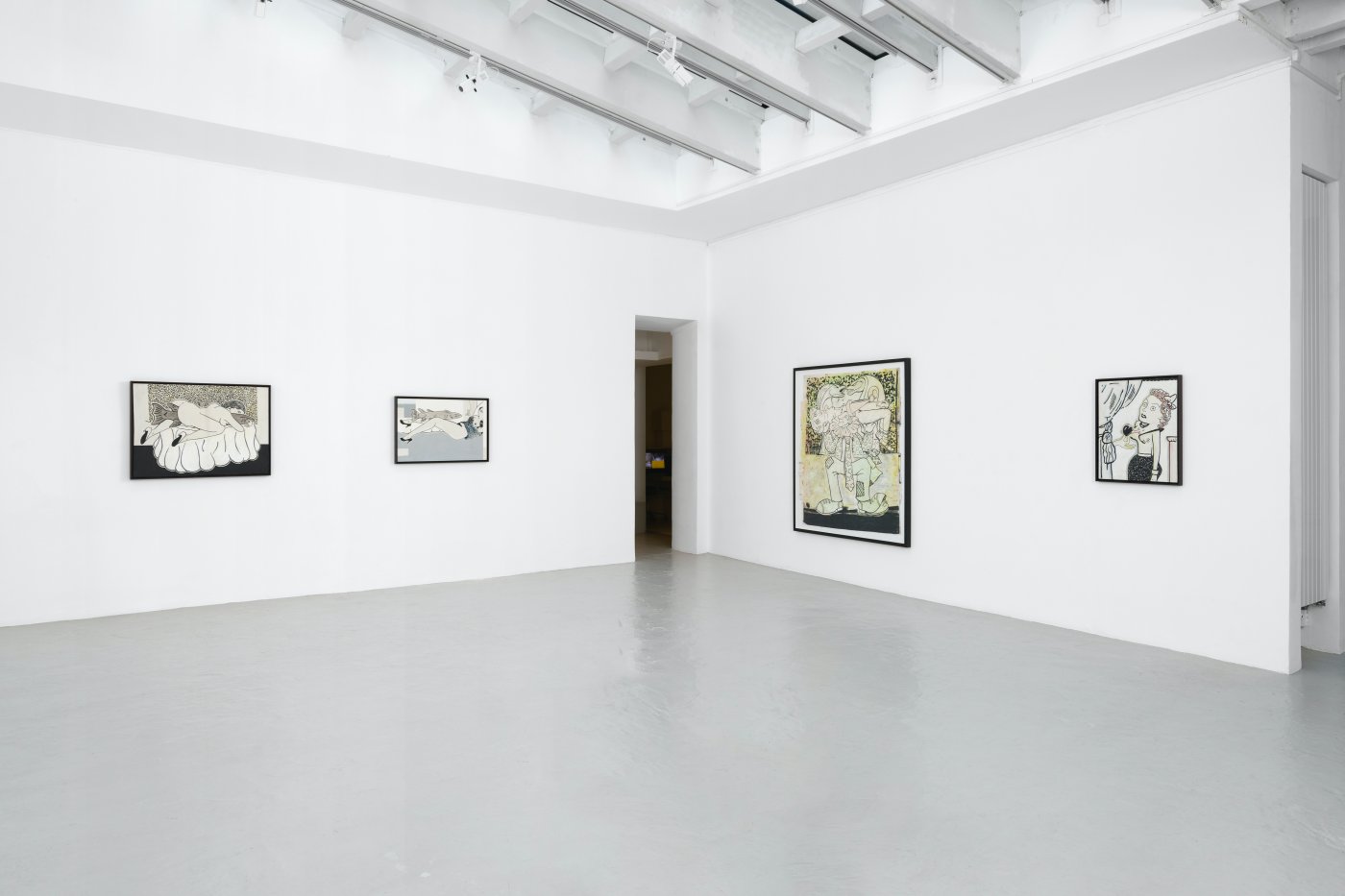 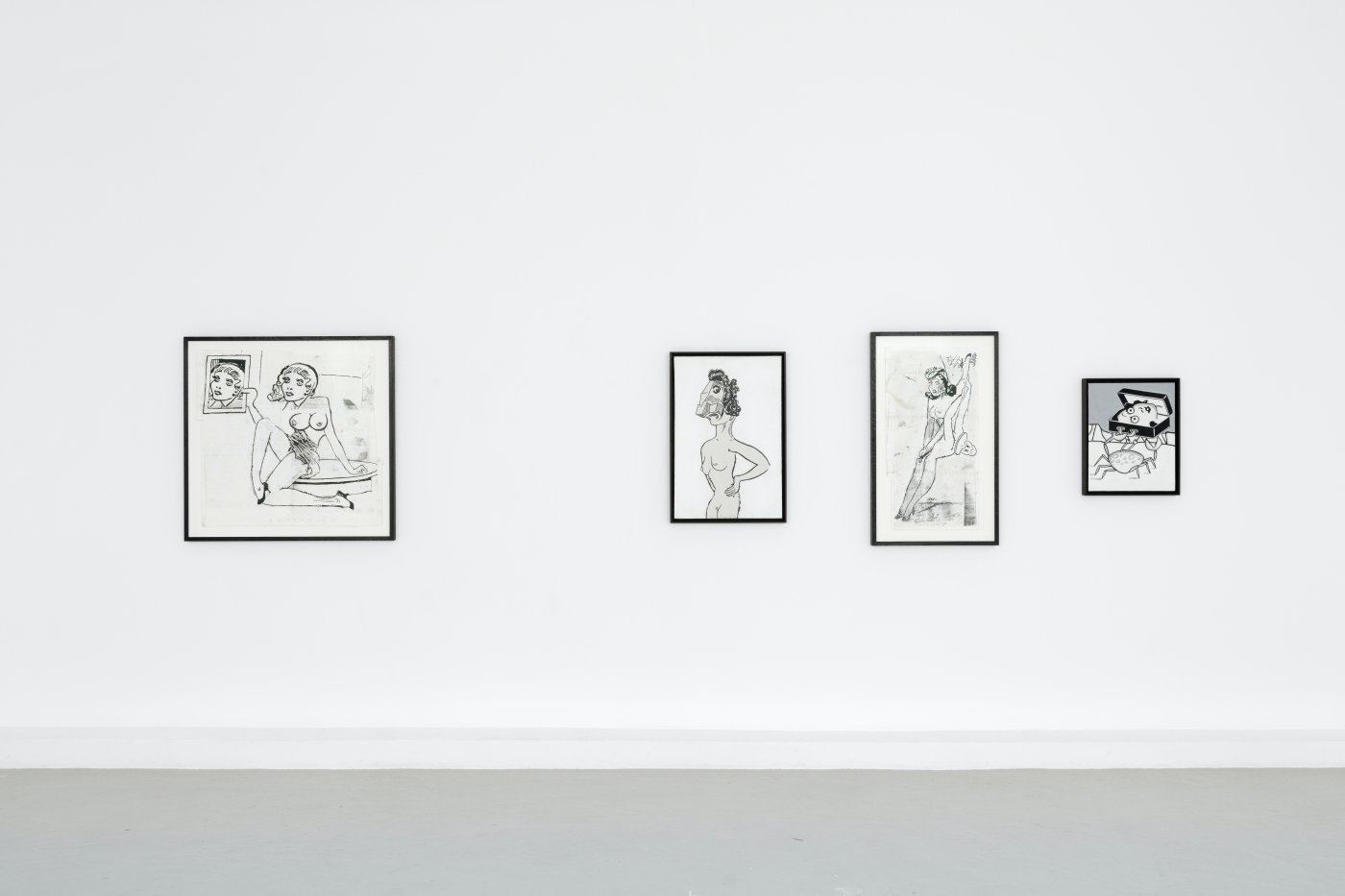 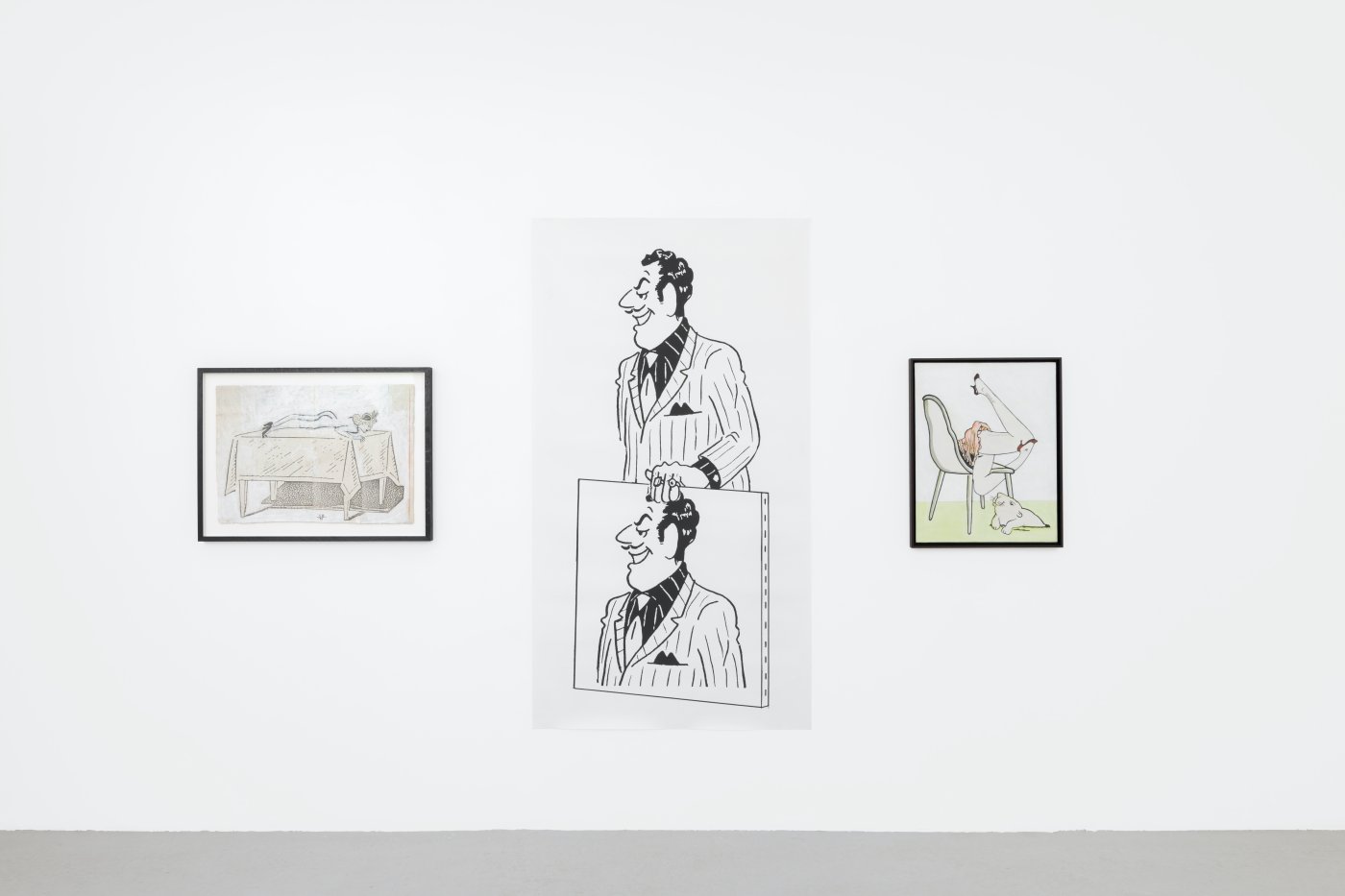 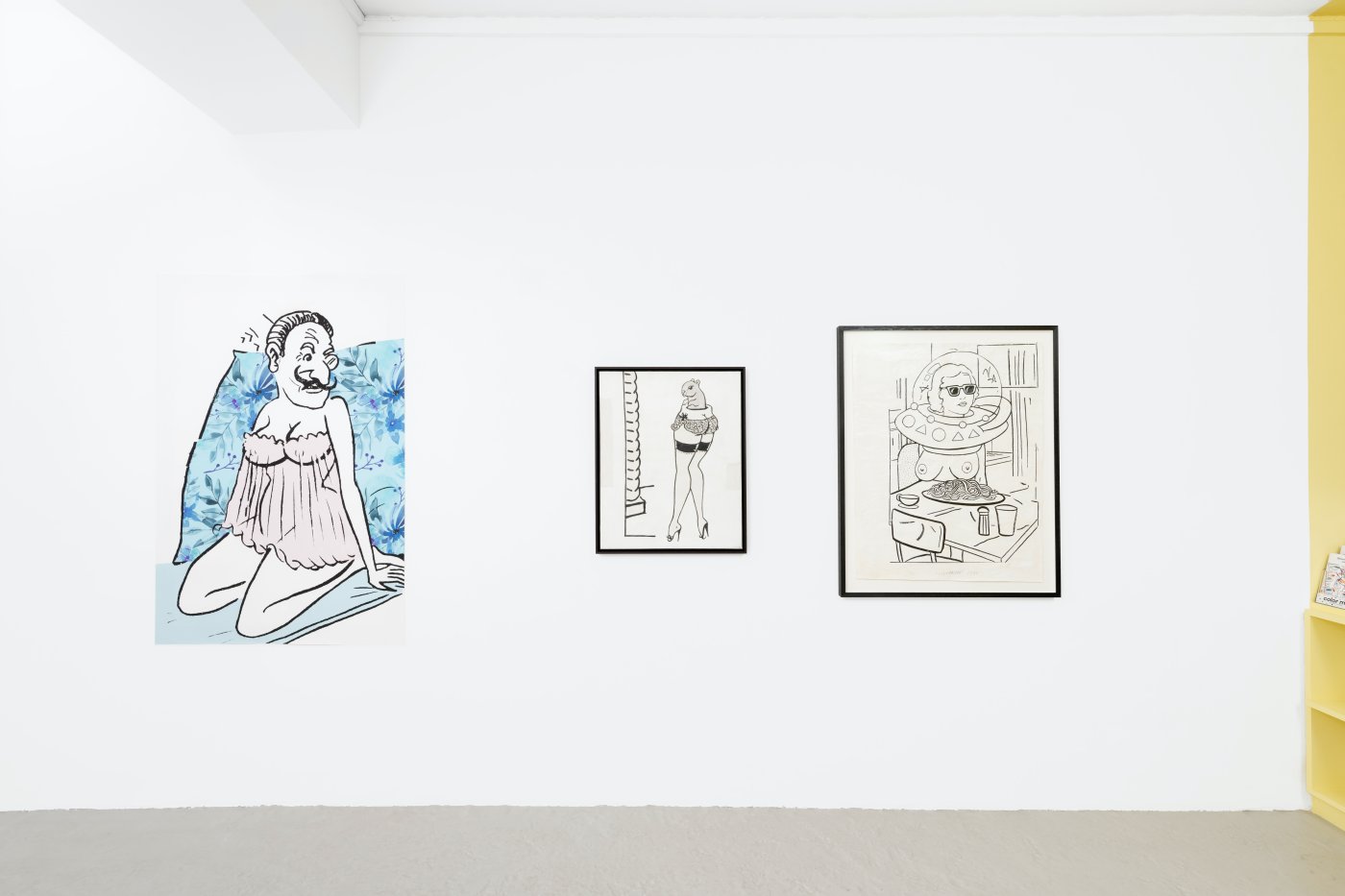 Since the 1970s, Steve Gianakos, a New York artist of Greek origin, has been producing paintings and drawings firmly rooted in a punk rock version of pop art. Scantily clad pin-up girls, bemused innocents, seashells and shellfish, vacuum cleaners and rodents, all straight out of the comic strips, cartoons, b-movies and pulp fiction from his US childhood, from an era when American hegemony imposed its soothing clichés and consumer norms on Western society.

Gianakos is the direct heir to Warhol’s early canvases with their comic-strip characters, but above all to Roy Lichtenstein’s work and imagery from the 1960s, also borrowed from the stereotypical, sappily sentimental or military comic strips of the era. Yet while the above-mentioned pop artists simply reproduced the original images with no visible modifications other than those related to scale and texture, Gianakos—closer to John Heartfield than Warhol in this respect—cuts out various elements of the images, which he then categorizes and classifies, before re-assembling fragments from these archives to produce works—both paintings and drawings—whose whole riotously exceeds the sum of its parts. If pop art “chilled out” the world, Gianakos’ creations set it alight with touches of Dadaist humor and perfectly assumed bad taste. Water nymphs and their piscicultural eroticism, bodies sawn in two or decapitated, young girls sniffing coke, nymphets of dubious sensuality, a crab pinching an ecstatic pin-up with bomb-shaped breasts while yet another is draped with a snake in the guise of a scarf… Grating images with a whiff of sulphur; as with Heartfield’s oeuvre, these reassembled depictions generate their own criticism, revealing desires concealed beneath the mask of innocence as well as by extension those hidden in the mind of the spectator, as one flirts with sado-masochism, paedophilia, zoophilia and gerontophilia.

Fans of Philip Guston, who renounced New York abstract impressionism in the 1960s, will adore the work of Steve Gianakos, whose early career coincides with Guston’s return towards figurative art. Instead of the hooded Ku Klux Klan members created by Guston, with their cars and cigars (and occasionally paintbrushes) in their hands, Gianakos’ uninhibited starlets are shown in high-heels and pill-box hats, with or without negligees, with boas fashioned from real living boas and occasionally fish clutched between their thighs, in recurring, obsessive images, extracted and enlarged from the artist’s archives. In the work of these two Americans, we find the same insolence and lack of respect, the same refusal of artistic categories and hierarchies and the same taste for provocation.

If these figures jump out from the canvases, it’s due to the ligne claire style of the drawings doing its work in the same way as in the earliest comic strips. On this fishing trip in murky waters, the figures all snap at the bait attached at the end of the artist’s clear lines: deviant eroticism, bodies occasionally dismembered, playful perversity, casually depicted without pathos or judgement. Yet this isn’t the universe of Tintin or Crumb’s counter-culture or even the absurd humor of Glen Baxter. In this world, clean-cut lines are scrambled, broken down and stripped back, revealing what we cannot bear to see, ripping clichés apart, outlining and appropriating the source images, liberating them from any prudishness, doubling up and mutating (adding extra arms and legs to the bodies of these young women, aghast at a variety of grafted animal parts and other gently monstrous metamorphoses).

With the same limpid precision of a deceptively childish comic strip, clear lines are used to disfigure the ravishing females and handsome men, replacing their faces with a range of various incongruous and surreal objects: an antique vase, a rooster or perhaps some potatoes for the women and a joint of beef for the man’s face or even a bunch of bananas, a huge safety-pin, a fairy tale carriage or a Halloween pumpkin… And that’s without mentioning a selection of cubist versions of female faces.

Three of Gianakos’ recent works involve a fantasized or acted change of sex, stage by solitary figures with a mirror as their sole partner. Two women seeing themselves as “men”; one wearing a devil’s mask with a comically crooked moustache and with the inscription L.G.B.Q.T stamped across her forehead, the other dressed in pink negligee. In the third image, a naked adolescent discovers his own reflection as he holds a child’s dress up to his chest. In these works, as elsewhere something is not quite right—the dress is too small, the grotesqueness of the mask, a dubious taste in lingerie—and the reflection disappoints, arousing perplexity and even discomfort, and once again the spectator finds himself in complete disarray!

In this anatomically deviant theatre, where objects and body parts, beavers and penguins, lecherous octopuses and melancholic cuttlefish joyfully swirl around, backgrounds are sometimes lent color with areas painted in the manner of abstract impressionism, something quite surprising for this heir to pop art, but then again why deny oneself in terms of style? In the name of whose rules? In other drawings or paintings, the backgrounds are darker, with long grayish smears due to defects in the photocopying process. “The more I looked at the photocopies,” says Gianakos, “the more I found my interest shifting from the image itself to the texture of the paper.” Somewhat reminiscent of Sigmar Polke’s work, we also find raster-dots, runs and mechanical smudging. In the case of both artists, we observe the same interest in pop imagery, the same integration of content and form and the same provocative juxtapositions, mischievously and assumedly used at the risk of being accused of bad taste.

Rejecting all forms of decorum, unwilling to comfortably slot into any category from the history of art, paradoxically a defender of a certain subtlety, of an unexpected elegance, Steve Gianakos obstinately traces his path far from the well-trodden highways. Some will certainly blench with rage on discovering these outrageous yet delicate scenes. But, you can’t please everyone all of the time, especially when your art is a much punk as it is pop.