Visiting the Roman Forum in late spring several years ago remains one of the most important cultural moments I’ve ever experienced. Red poppies in full bloom scattered the area, life pulling through ruins. We are in a state of constant destruction and becoming, cycling and ever reinventing the past as present.
—Sterling Ruby

Gagosian presents FUTURE PRESENT, an exhibition of new sculptures and collages by Sterling Ruby that reflect on the perils of environmental deterioration. While this is his first exhibition at the gallery in Rome, Ruby has exhibited in the city before at venues including Museo d’Arte Contemporanea Roma (MACRO) and Fondazione Memmo (both in 2013). 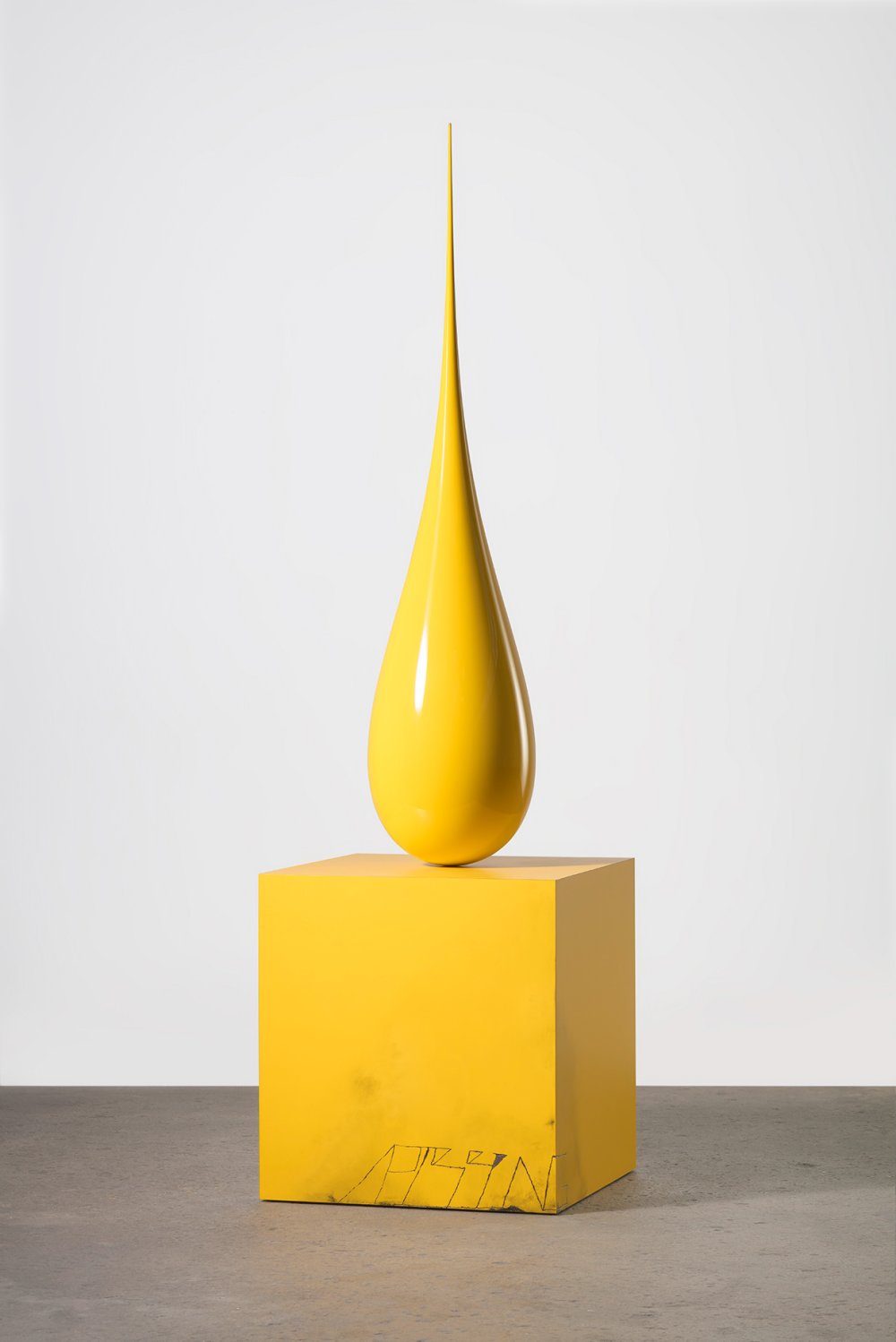 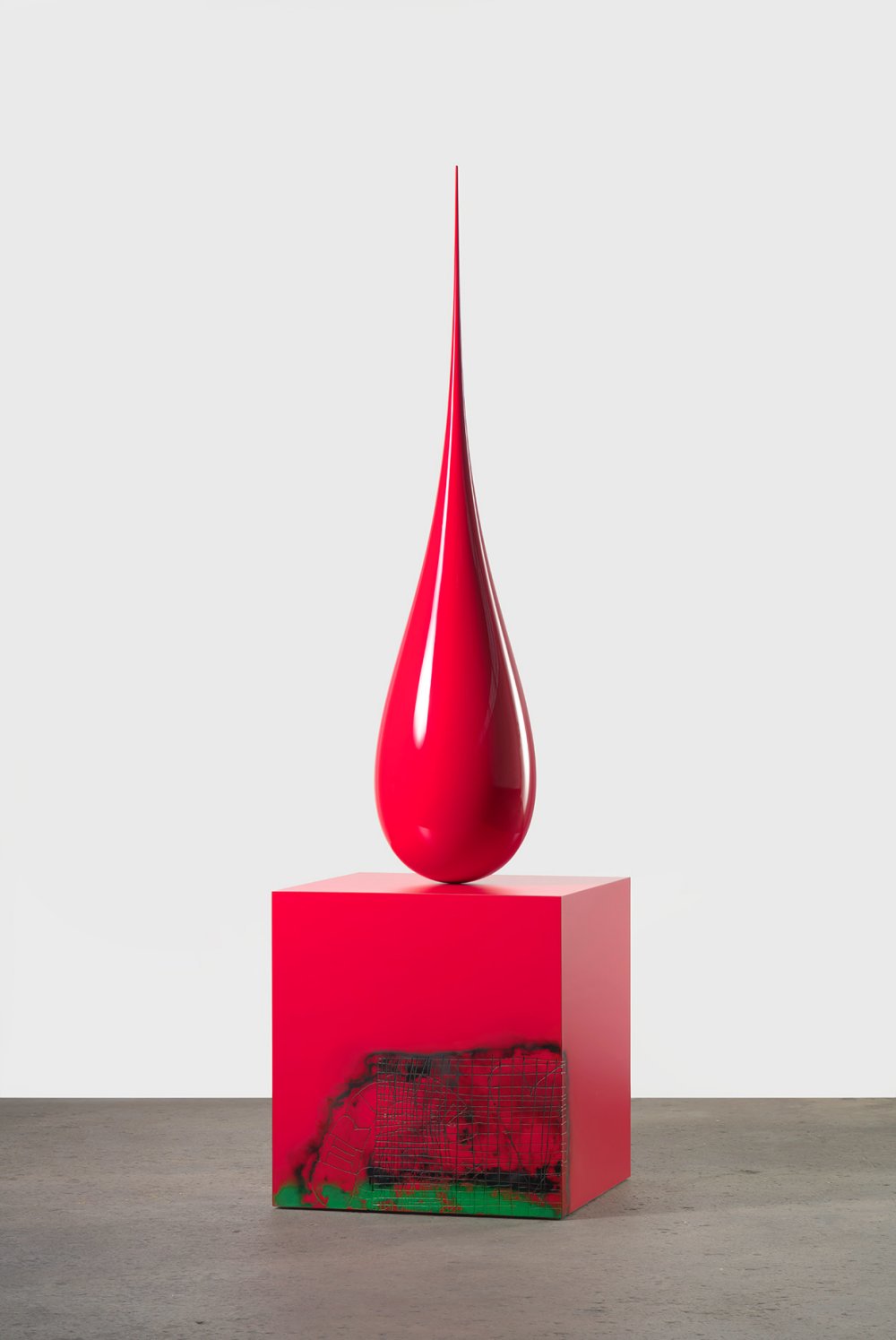 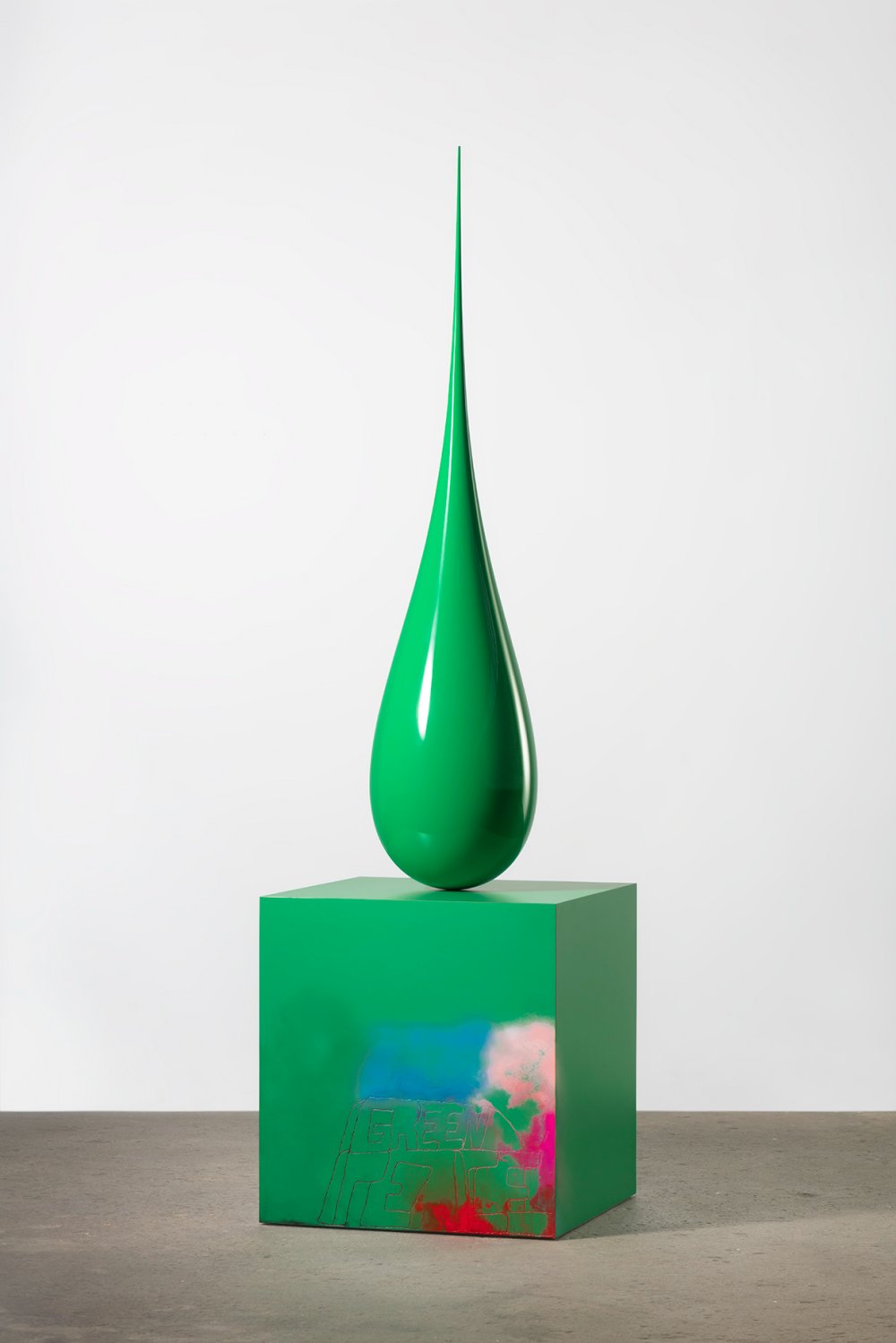 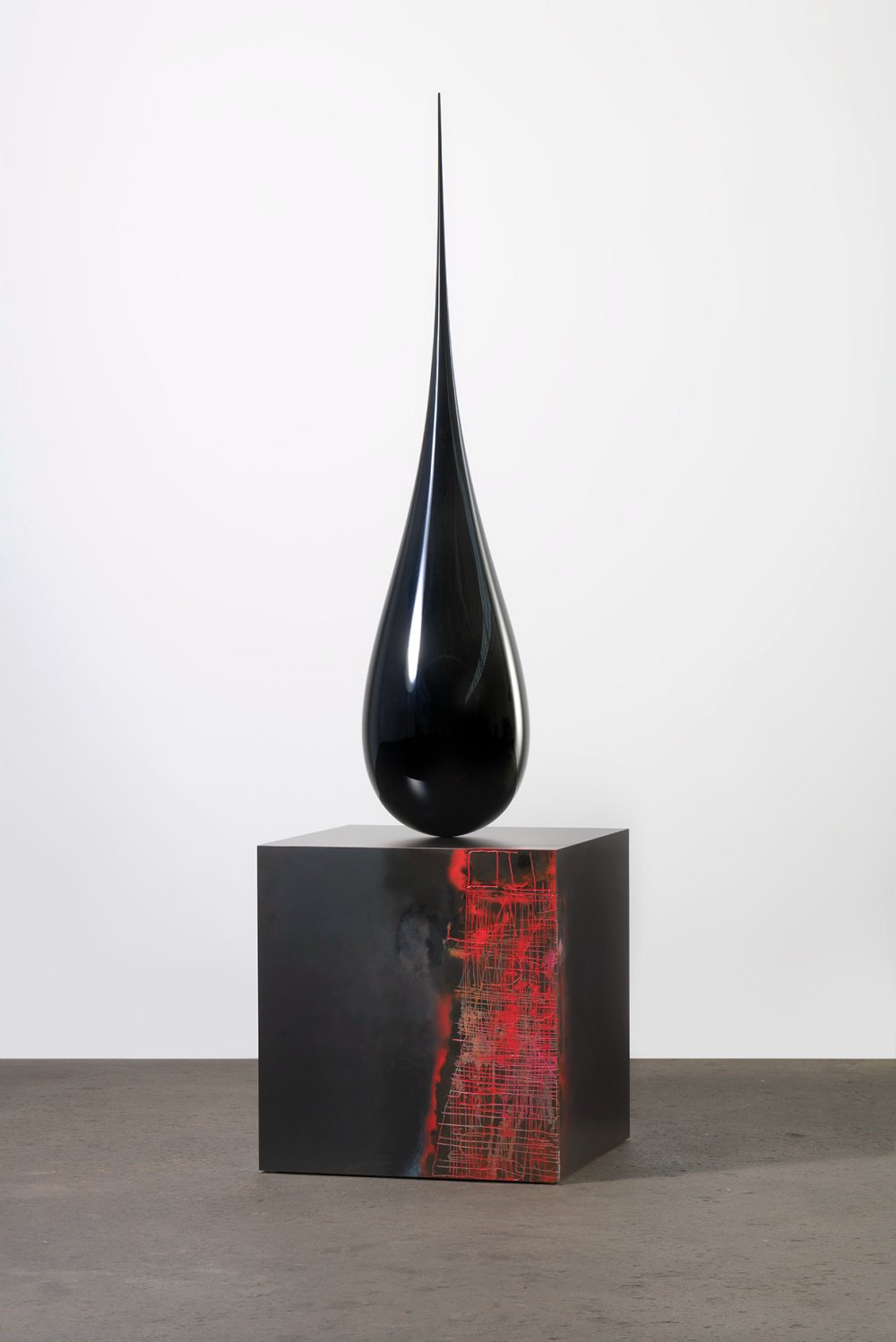 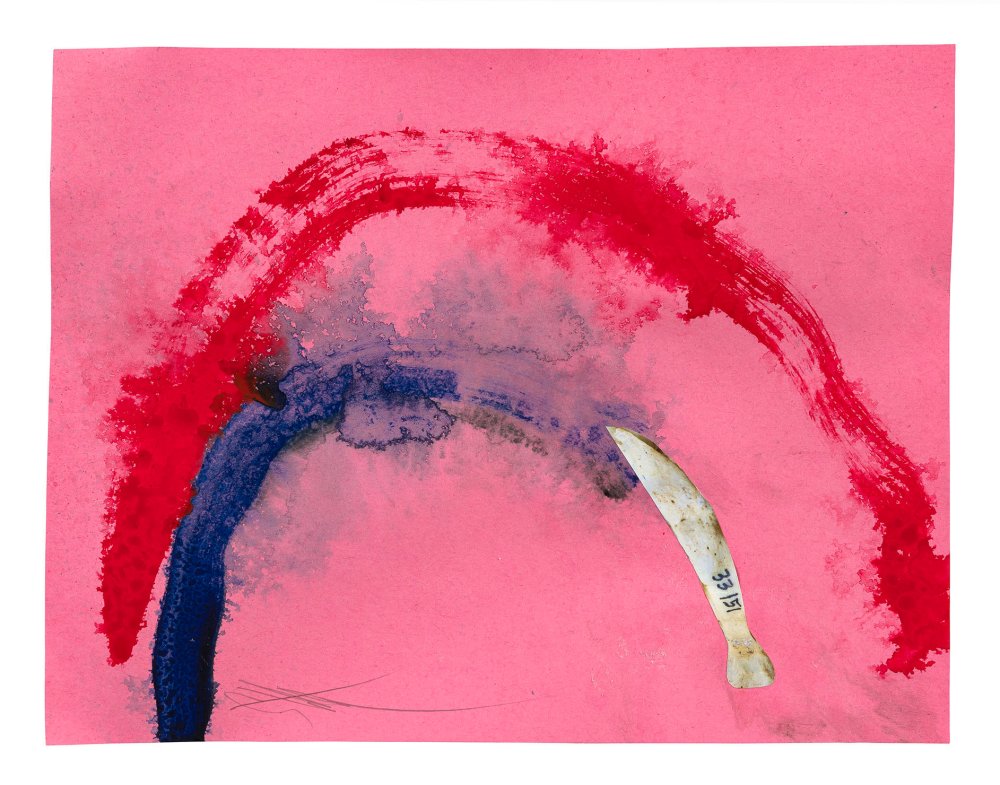 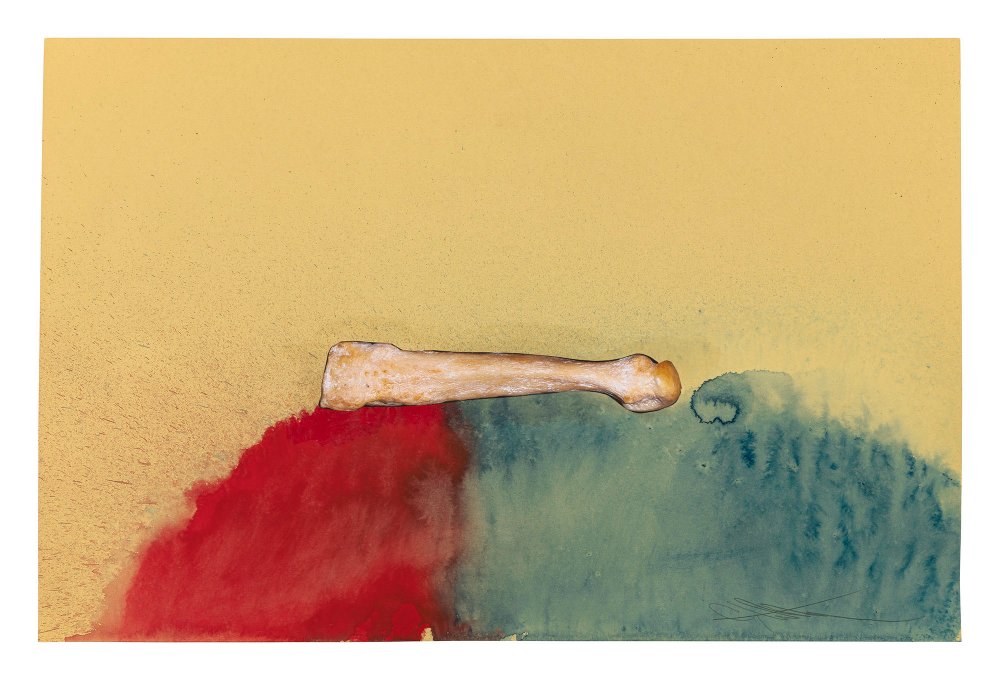 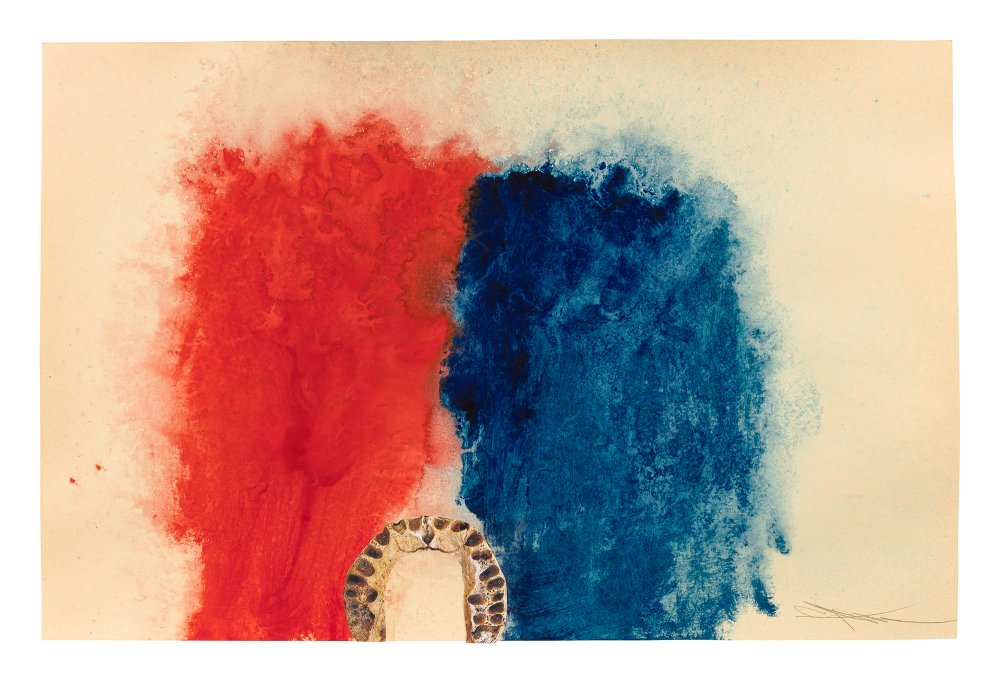 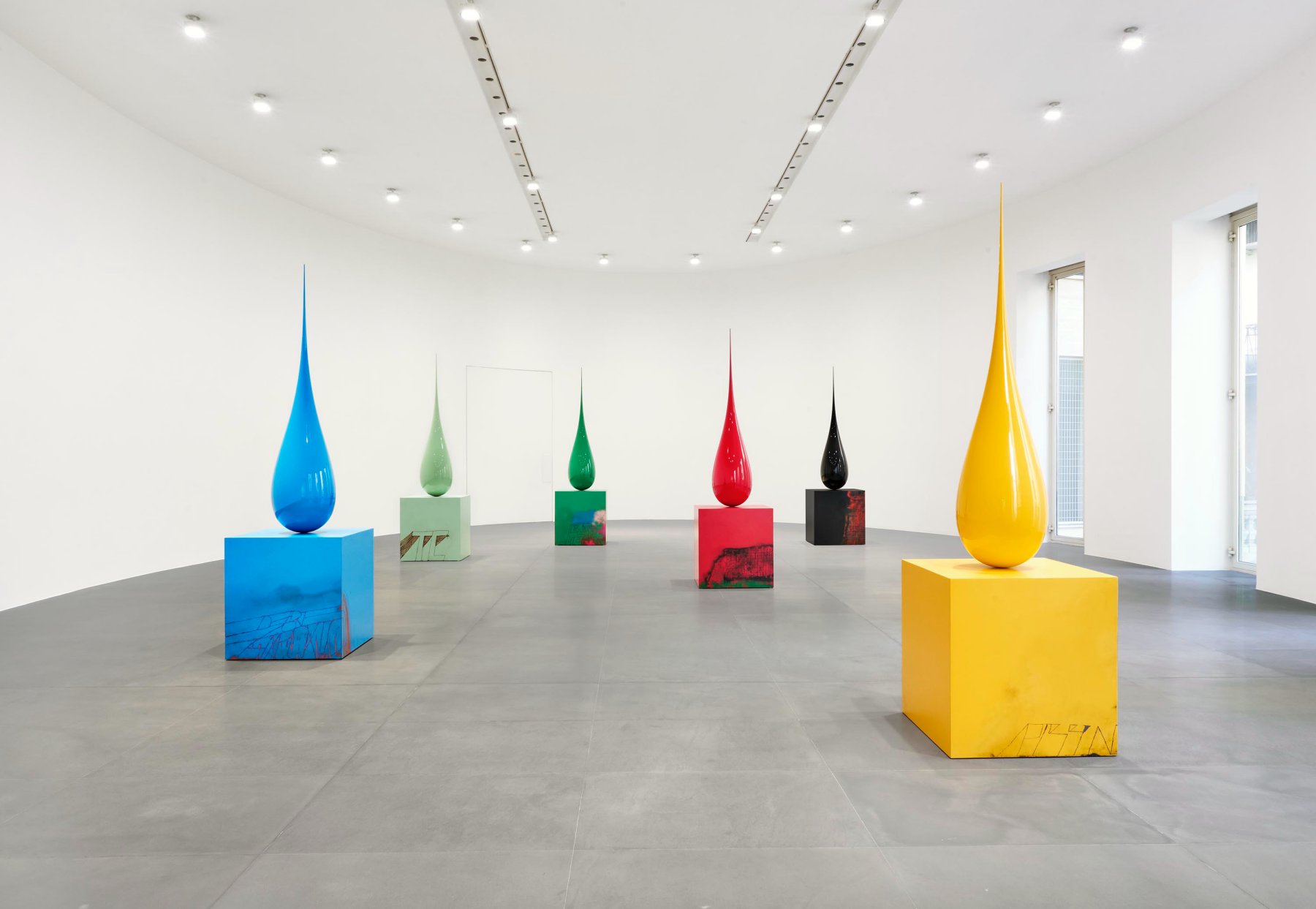 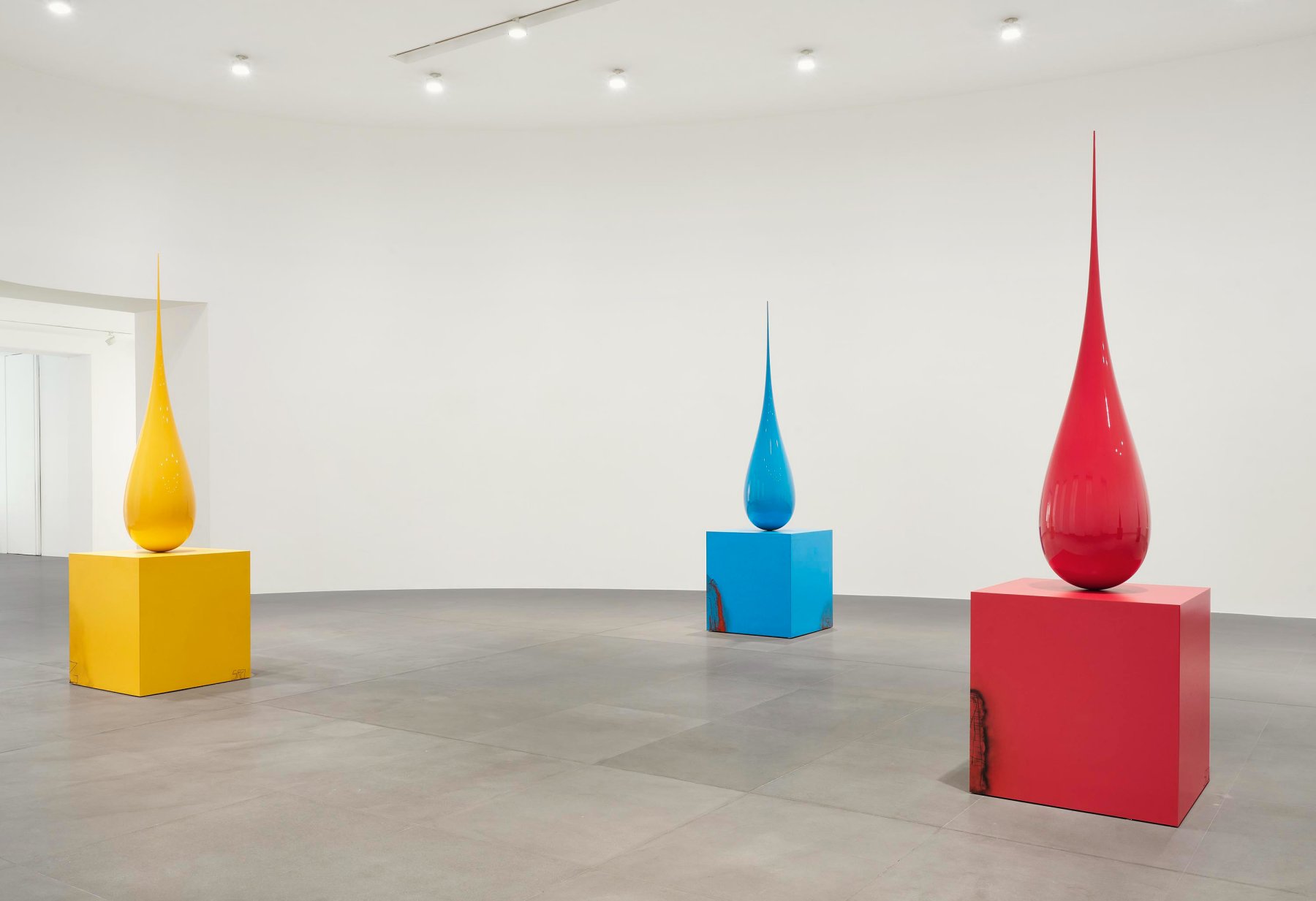 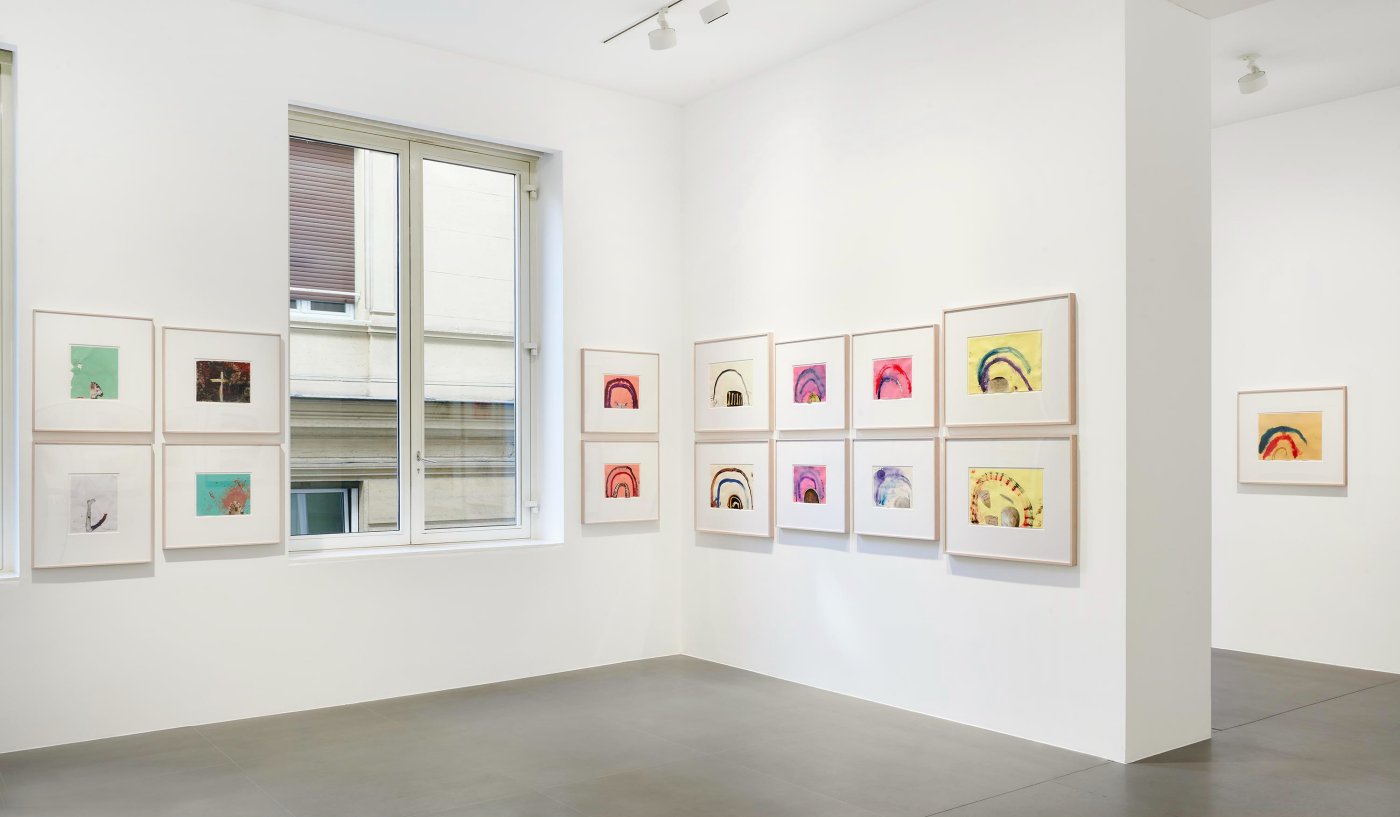 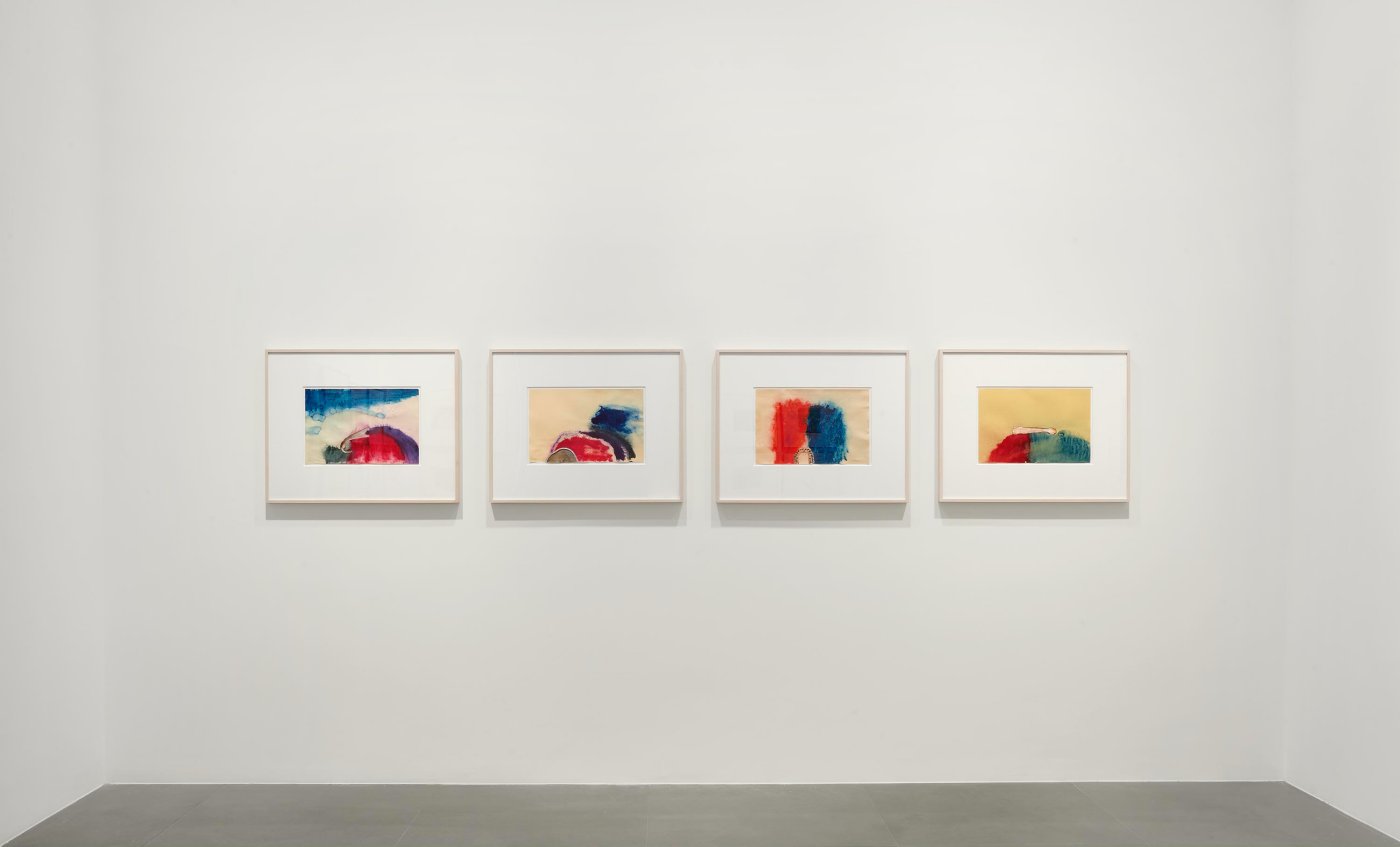 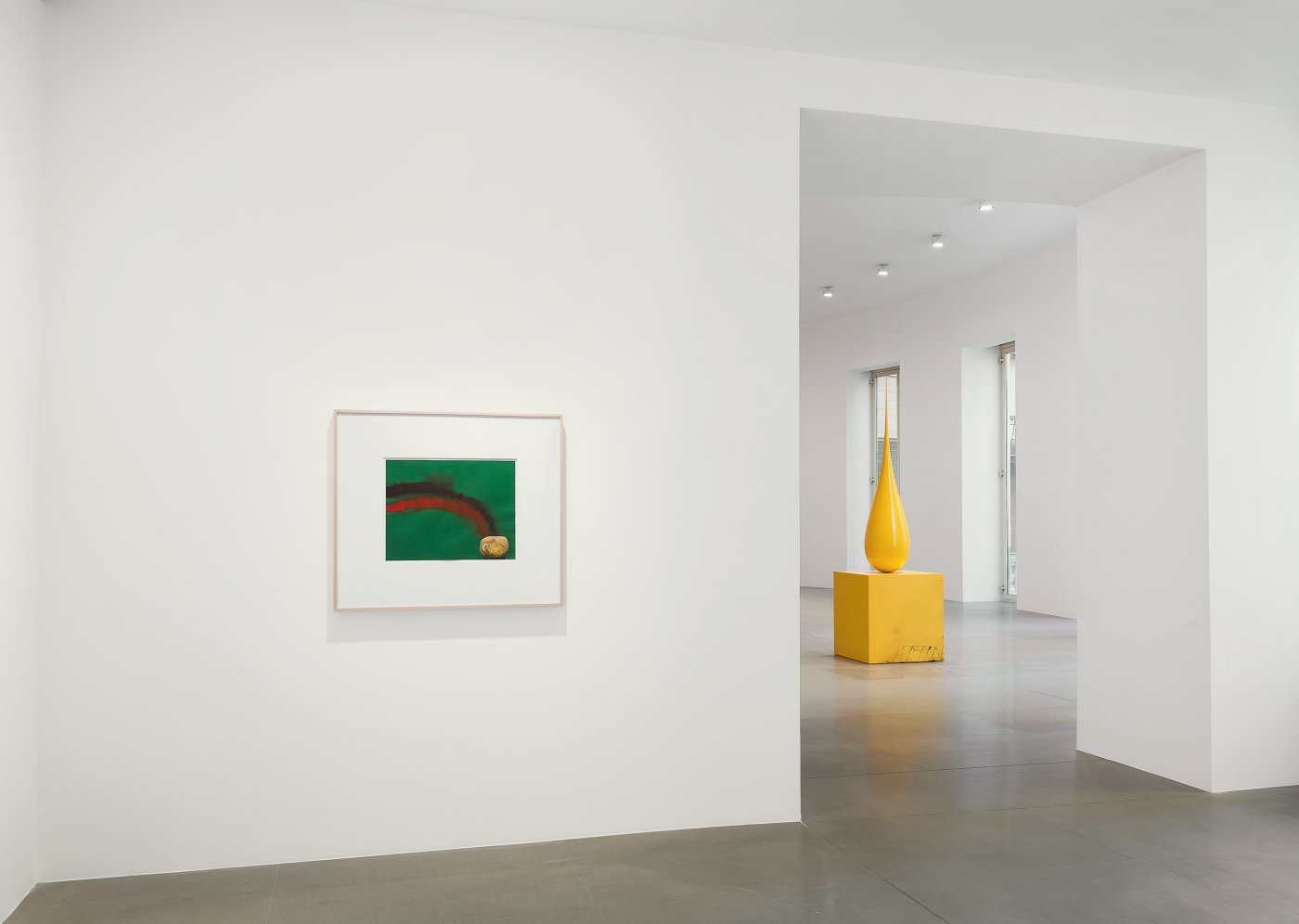 In an oeuvre encompassing sculpture, ceramics, painting, drawing, collage, video, and textiles, Ruby engages art history, institutional power, and his autobiography. By contrasting clean lines and recognizable objects with rough-hewn and uncanny forms, he disrupts aesthetic convention and deconstructs contemporary social structures. Ruby’s sculptural practice draws on the craft traditions of sewing and woodworking as well as the domestic interiors and hot rod culture that he was exposed to while growing up on a farm in southeastern Pennsylvania. Living and working in Los Angeles, he pulls from the physical and conceptual landscapes of the city, exploring the capacity for acts of defacement, such as graffiti, to generate a new painterly sublime.

In FUTURE PRESENT, Ruby contemplates our acceleration toward ecological collapse. Six large, bright, perfectly formed monochromatic droplets—monuments to blood, urine, oil, water, “total carbon,” and “greenpeace”—are positioned atop matching Formica pedestals, each of which is inscribed with initials denoting the tribute in question. The contrast between these pristine forms and the debased domestic material below articulates a schism between public and private, and the degraded definitions of each realm. Installed in the gallery’s ovoid space, these forms coalesce as a chorus representing the breadth of spheres—from the bodily to the chemical—affected by or further propelling environmental demise.

An accompanying suite of small collages from the ever-evolving series DRFTRS (2013–) (the title is a shortening of drifter) features watercolor paintings of rainbows punctuated by photographic images of bones clipped from archeological magazines, and begs a poignant question: What is a rainbow if nothing remains alive to see it? Ruby has described the medium of collage as an “illicit merger,” implying conceptual as well as technical transgression. The examples on view in Rome—like others in the series—are both analytical and emotive, again combining social comment with formal experiment. Inspired in part by the ruins of ancient Rome, the DRFTRS collages—and FUTURE PRESENT as a whole—manifest Ruby’s continued interest in archeological excavation, in the cyclical nature of humanity, and in all that we may still glean from that which is otherwise lost to time.

Also opening on November 20, work by Ruby will be installed in the Toletta di Venere of the Galleria Doria Pamphilj museum in Rome, a repository of old master paintings housed in the private palazzo of one of Italy’s longest-established collecting families. The Doria Pamphilj collection includes Diego Velázquez’s Portrait of Pope Innocent X (1650), which famously inspired several reinterpretations by Francis Bacon. Ruby will exhibit a new painting, WIDW. CRASH CULTURE. (2021), from the WIDW series (2016–), whose title is the artist’s shorthand for “window.” This is a rare opportunity to view a work of contemporary art in this extraordinary museum.