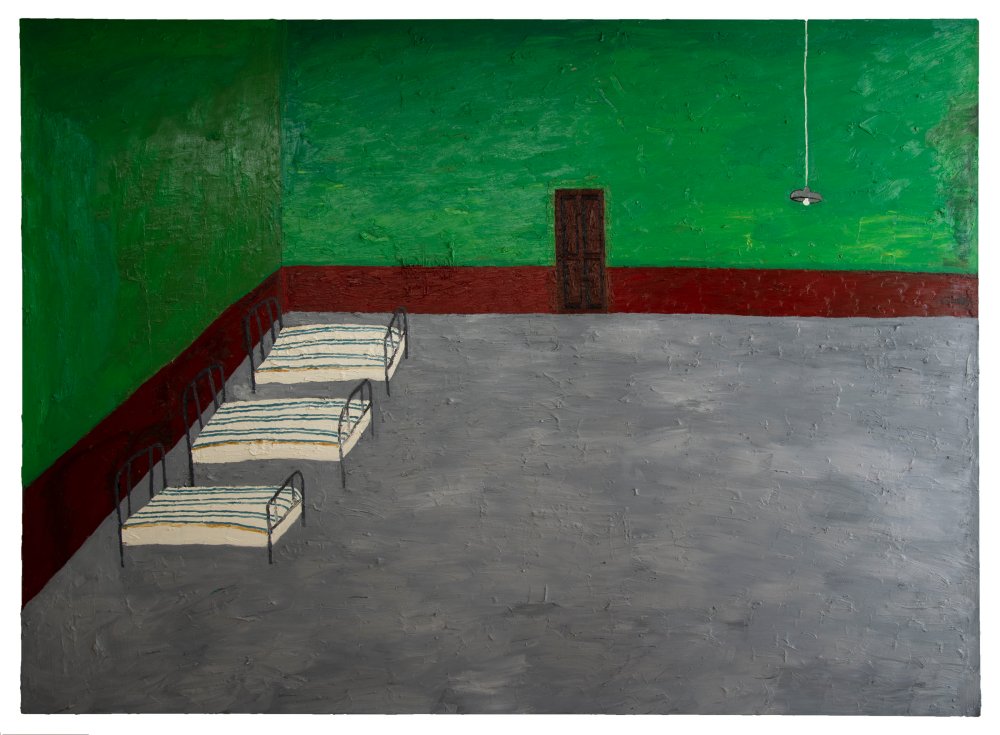 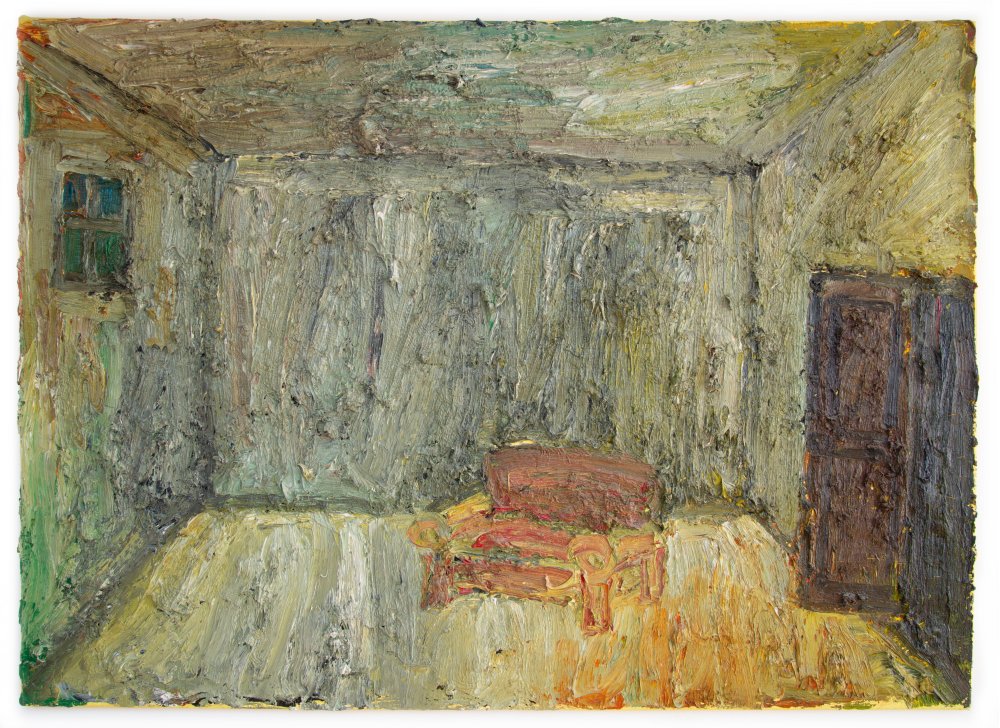 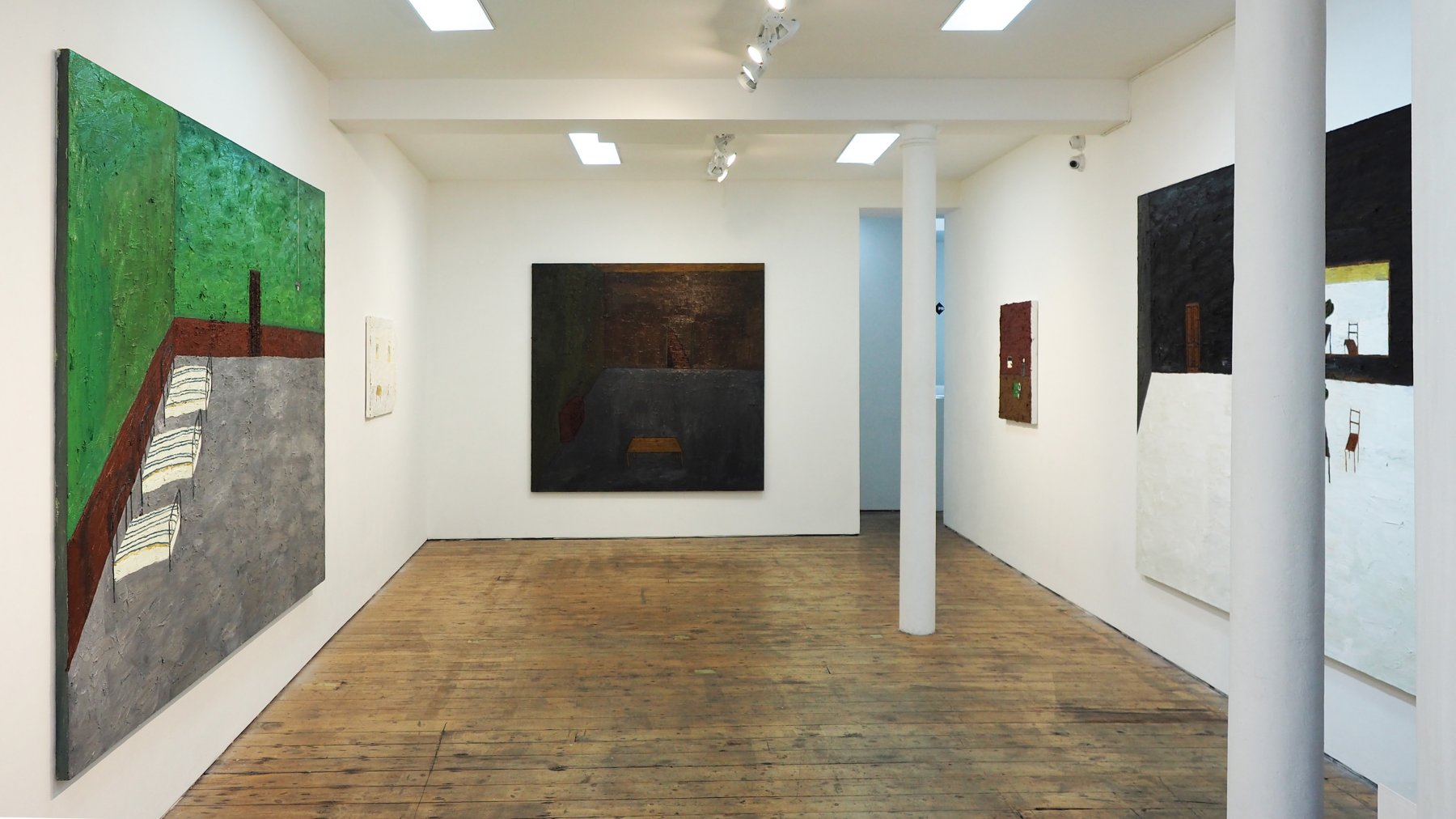 In language alone, genuine emotion and truth must be chiselled out of solid granite, whereas painting can offer an immediate access. It is therefore all the more tragic that painting has become a lost art.

The title of the exhibition Paintings of Remembrance (1) doesn’t have anything to do with real memories or past narratives, recalled dreams or any sort of memorial. In later life memories of past events are usually far too painful to recall: betrayal; cowardice; guilt and shame. I once wrote that if a finished painting didn’t elicit an immediate, involuntary ouch! from me then it had failed to touch that raw nerve always lurking beneath the surface of things. Ouch! – a momentary exhortation mirroring the exorcism at the core of a painting.

‘Remembrance’ here is rather a reconstituted, distilled emotion trapped in paint as in amber. There are infinite varied emotions within us. A painting can evolve and isolate extended un-experienced nuances of emotion, long forgotten and hidden. For this to be accomplished the painter must relinquish conscious control in the creative act – not an easy thing to do. I always feel that my best paintings painted themselves, like the broom of the sorcerer’s apprentice. Unfortunately today’s painting often amounts to just the illustration of a preconceived idea. These might be ideas about political propaganda, cultural propaganda, climactic argument, historical analysis – but dealing with a perceived reality. But it ends as rational, conscious realism, devoid of the one indispensible key element of the painterly creative process – the elimination of conscious control.

The great Oscar Wilde saw this clearly of course. In The Decay of Lying he cogently and convincingly argued that facts make art sterile in ‘noisy assertions of realism’, by which he means those aforementioned categories. Art has always been press- ganged into the service of those with an agenda to promote. But perhaps today this is more crassly espoused than ever. In Wilde’s opinion we should be more or less indifferent to art’s subject matter: ‘reality drives art out into the wilderness’ – true decadence. Wilde is very much a forerunner of that marvellous essay Abstraction and Empathy by William Worringer. Both argue that a great abstract art, such as the Oriental, really determined reality and formed the essential template through which we could shape and view it. Again Wilde stresses that ‘a great artist invents a type and Life tries to copy it’. For him life imitates art, not the other way round, but only if it breaks from the ‘prison-house of realism’. As another illustrious forerunner put it: ‘The purpose of art is to embody the secret essence of things, not copying their appearance’ – Aristotle, 384-322 BC.

The elements and objects in my painting are personalised icons that are used over and again. In the original icon painting, the elements represented in the iconography barely altered over the centuries. In their theatrical stage-sets, the stylised tokens representing leaves, flowers, trees, stairs, interiors and buildings – for example – evolved slowly over time and then remained constant. They function as counters to engender an emotional tension – a spiritual tension.

Why should this be so? As in my own painting, the elements are never drawn from an external reality. There is no concern with natural appearance or scientific accuracy. In such a setting emotion breaks free from the conscious grip of reality; from the imperative to analyse a rational and scientific perspective, colour tone, hue, shadow and naturalism – the stock in trade of the Renaissance. This overriding compulsion for a conscious logic of representation expunged the fundamental role of painting: to reconnect with unconscious emotion, an unconscious emotion which is ultimately the driver of all secondary narratives and imagery, as the dream process reveals. Free from the necessity to deal with any factors dependent upon conscious deliberation, emotion and the creative spirit of the painting can be released.

The New York critic, Donald Kuspit, in a recent profile article (State magazine no.27, pp 30-33) suggests that Newton is ‘not a realist, but a new kind of surrealist. The old kind of surrealism was informed by drive theory; the new kind of surrealism is informed by object relational theory. Psychoanalytic theory has moved away from drive theory towards relational theory, and so has the most subtle and sophisticated surreal art, Newton’s paintings being exemplary’ (p.32). It has been noted by Kuspit – and others – that the dislocated stage sets and tension existing between the objects set within them, evoke uncanniness.

It is this uncanniness which inadvertently exposes the correspondence between my painterly process and the abstract process of the dream. This is not a correspondence to any dream imagery, representation or narrative. Rather the correspondence rests in the inner structure and innate process of both; that is in the essential mechanisms of generating any imagery, iconography or narrative. It should be stressed that the representatives of objects in my painting are not ‘plucked from the air’, but are generated through an unconscious abstract creative process. The dream is able to provoke powerful feelings of uncanniness. This is fundamentally to be encountered when there is a momentary and fleeting recollection of a dream as if it were an actual memory of some- thing that really happened. This displacement can be transiently unnerving and engender a sensation of the uncanny.

Many have commented that they find my work disturbing, all the more so as there is no obvious reason for them to be so. After all there is only an emptiness. But perhaps emptiness can be far more disturbing than monsters and hobgoblins. But to feel disturbed without obvious cause is itself uncanny – as those unconscious factors resonate instinctively within the mind of the spectator. It is interesting to recognise within this correlation that the dream, like the icon painting, also tends to evolve motifs to be used and re-used. It may be recalled that often an object encountered in a dream – a mansion or a railway station for example – might well reappear in subsequent dreams generating a narrative requiring such props. In other words the railway station in a dream will rarely, if ever, be one that actually exists or could be located somewhere. Rather it is a construct that, as in icon painting, will not interfere with the constitutional objective of the dream process – an emotional exorcism. The transformation of emotion is not compromised by clouding the issue with aspects of reality which can only be a distraction. Thus my painting functions in exactly the same way.

Courtesy of the artist and Bermondsey Project Space, London