On view in the Paris space, contemporary artist Stephen Appleby-Barr’s latest painting for Robilant+Voena is a compelling, androgynous portrait. 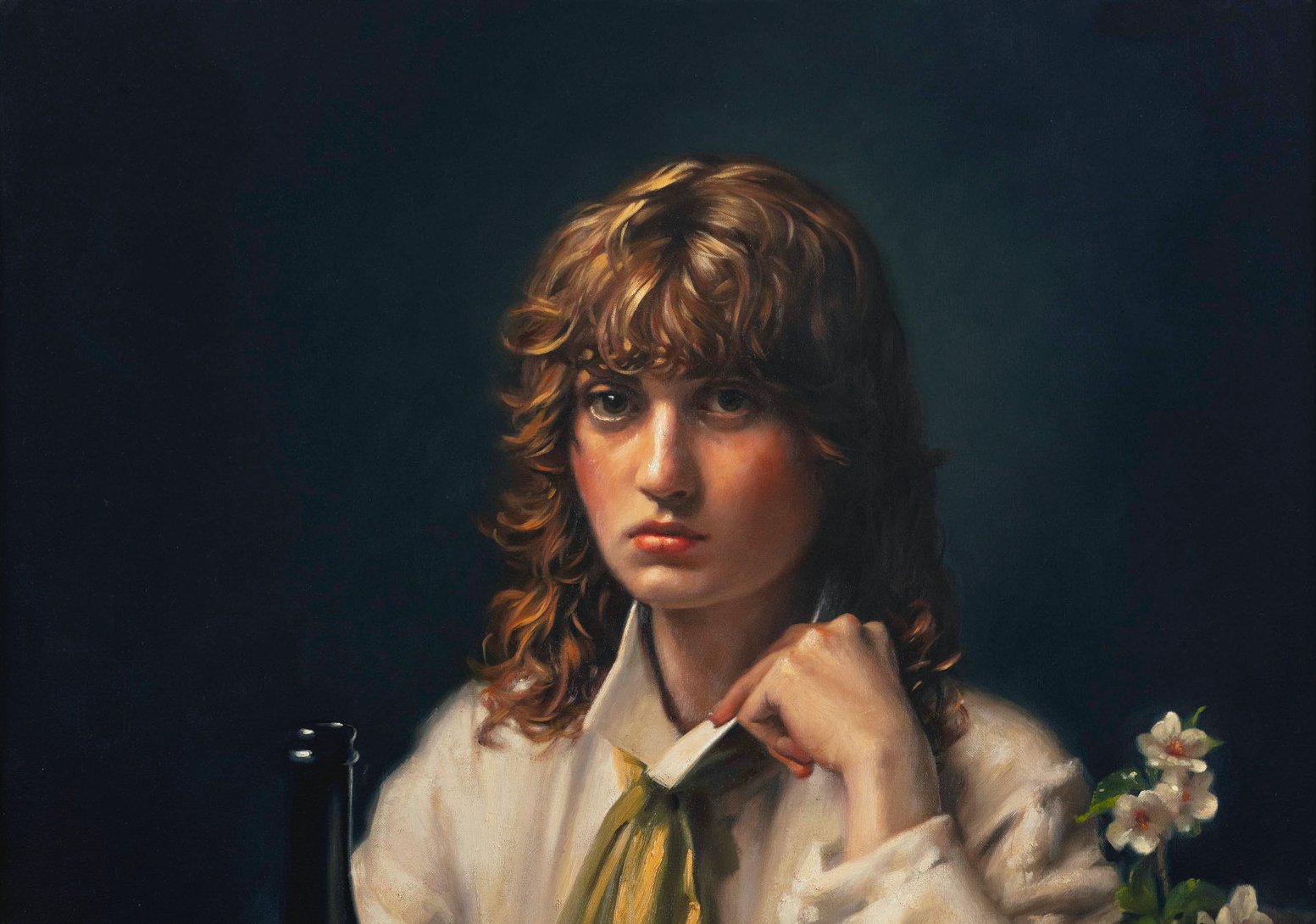 Posed at a table in a dark, intimate setting, the sitter is dramatically illuminated in a manner which recalls the distinctive chiaroscuro of Old Master painters such as Caravaggio. Many of the objects scattered before him would not look out of place in a traditional portrait, yet their deliberate, rhythmic positioning, and the inclusion of a scattering of pearls, turquoise jewels, and small white geometric objects are suggestive of a deeper meaning. The portrait is accompanied by a trio of atmospheric still lifes, giving an insight into the artist’s dreamlike and otherworldly universe.

Stephen Appleby-Barr’s paintings juxtapose fantastical and everyday objects, conjuring a dreamlike world which verges on the uncanny. His sensitive and masterly use of the traditional medium of oil paint contrasts with his modern sensibility. Appleby-Barr sees his art as storytelling, and tours museums and city streets in the search for characters and sets to introduce into his otherworldly universe. He often constructs intricate miniature sculptures and maquettes in preparation for his paintings, perfecting the scale of his set pieces before recreating them on canvas. Born in 1981 in Toronto, Stephen Appleby-Barr is currently based in London, England. His work has been exhibited and collected in Canada, the United States and Europe.

Appleby-Barr’s portraits depict his friends and acquaintances. The sitter in the present work is posed at a table in a dark, intimate setting, dramatically illuminated in a manner which recalls the distinctive chiaroscuro of Old Master painters such as Caravaggio. The costume too recalls Baroque conventions, with its billowing white shirt and swish of green silk knotted around the neck. At first glance, the gender of the sitter is not readily evident—is this beautiful androgynous figure, glowing beatifically as if from within, a slightly masculine woman, or a slightly feminine man? A clue is found in the title, which identifies the sitter as Max Kallio, pointing to the latter. Indeed, Appleby-Barr’s depiction of Max can be said to be deliberately ambiguous when it comes to his gender, a recurring theme in his work.

Max’s calm self-assurance and direct gaze command the viewer’s attention. It is as if we are seated across the table from him and he awaits our comment, one hand informally adjusting his high white collar, the other poised on a wine bottle. Before him on the table is a shattered blue and white porcelain teacup, blood-red wine pooling in the saucer. Perhaps we have just shared a drink with him—though perhaps an accident, even an altercation, has transpired. Just as we cannot ask, we cannot know.

Appleby-Barr’s masterly evocation of texture and surface is much in evidence here. The viewer’s eye moves from the glinting reflections on the bottle to the detailed embellishments on the cup and nearby pitcher to the softness of the white flowers overflowing a humble brown vase. Many of the objects on the table would not look out of place in a traditional portrait, yet their deliberate, rhythmic positioning, and the inclusion of a scattering of pearls, turquoise jewels, and small white geometric objects are suggestive of a deeper meaning. Appleby-Barr’s work evokes the complex network of symbolic significance that can be gleaned from the flora, fauna, and luxury objects found throughout old master paintings. Yet while his sitters are surrounded by seemingly meaningful objects, they nevertheless remain enigmatic, simultaneously inviting and defying interpretation.