Galerie Thaddaeus Ropac presents the first exhibition devoted to the work of Stephan Balkenhol in Paris since 2009. 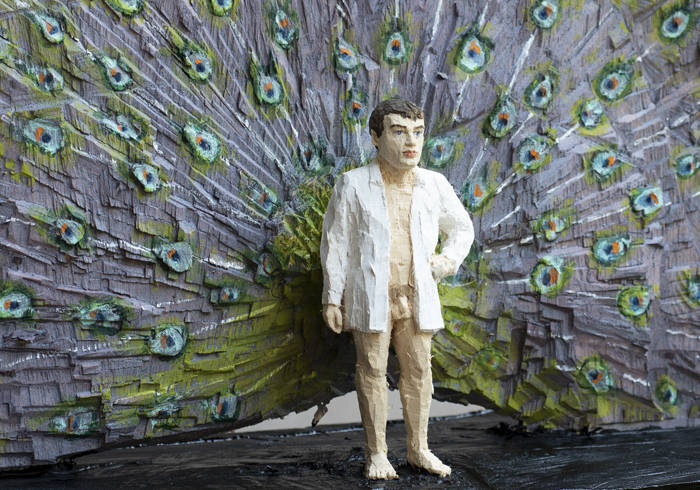 Stephan Balkenhol has been pursuing his work on woodcarving, focused on the human and animal figure, for more than thirty years. For this exhibition, he has drawn his inspiration from the approach of French author Jean de La Fontaine in his famous Fables. The 17th century writer’s critical look on the society of his time and on the permanence of human traits becomes a means for the sculptor to question the state of our current society.

If the new works do not necessarily relate to a particular fable, they present the same ambiguous relationship between the animals and humans of La Fontaine’s Fables. Like the fabulist, who exercises the art of elusiveness to give the reader a freedom of interpretation, Balkenhol does not seek to be moralistic. He aspires to engage in a more direct relationship with man through the image. Despite his attachment to figuration, he always places himself at a distance from reality. His sometimes ironic take and apparent playful treatment brings him closer to the fabulist. For him, “to observe is not to judge”. Because they do not represent anyone in particular and often seem to expect something, his sculptures touch upon fiction; they are somehow characters in an undefined story.

Balkenhol carves his characters with a mallet and chisel directly into tree trunks, often made of wawa wood. Never trying to erase tool marks, he leaves bare the raw aspect of the wood. The unique sculptures of the artist are combined with high pedestals that place them at man’s height. The colours applied later to structure the silhouettes are totally devoid of expressive value and contribute to lose sight of the original material. His men, women and animals seem both distant and attentive to the viewer. “I try to give them an open expression to others, says the artist. From there, all situations are possible”. The carved reliefs, in front of which the three-dimensional figures are placed, are also a means of creating situations that complexify the interpretation and open to a poetic narrative.

To go along with this new set of works, Balkenhol has created a monumental sculpture depicting the Greek hero Perseus holding the head of Medusa. The depiction of a well-known mythological subject constitutes somewhat of an exception in the artist’s career. It places the sculptor in the long line of famous artists who, from Benvenuto Cellini to Camille Claudel, represented this myth. Like fables, ancient myths form a collection of stories that belong to the collective memory and whose interpretation has gradually been enriched throughout history. To the heroic feeling usually attached to the representation of such subject, Balkenhol responds with a form of existential gravity. He renews with a tradition of sculpture more focused on the pure presence of the figure and its humanistic characterization.

Born in 1957 in Fritzlar, Stephan Balkenhol lives and works between Karlsruhe (Germany), Kassel (Germany) and Meisenthal (France). He began carving wooden figures in 1983 in reaction to the conceptual teaching dispensed at the Hamburg School of Fine Arts, where he was a student of the minimal sculptor Ulrich Rückriem from 1976 to 1982. His first sculptures in wood placed the image of the human body at the center of his art and reintroduced figuration into contemporary sculpture. In the 1990s, his repertoire expanded to animals and hybrid creatures, followed by architectural motifs and reliefs.

Balkenhol also has an important repertoire of public commissions to his credit. A sculpture in tribute to Auguste Macke was inaugurated in Bonn (Germany) in September 2018 and a seven-meter high sculpture will be inaugurated in Toronto (Canada) in November 2018.