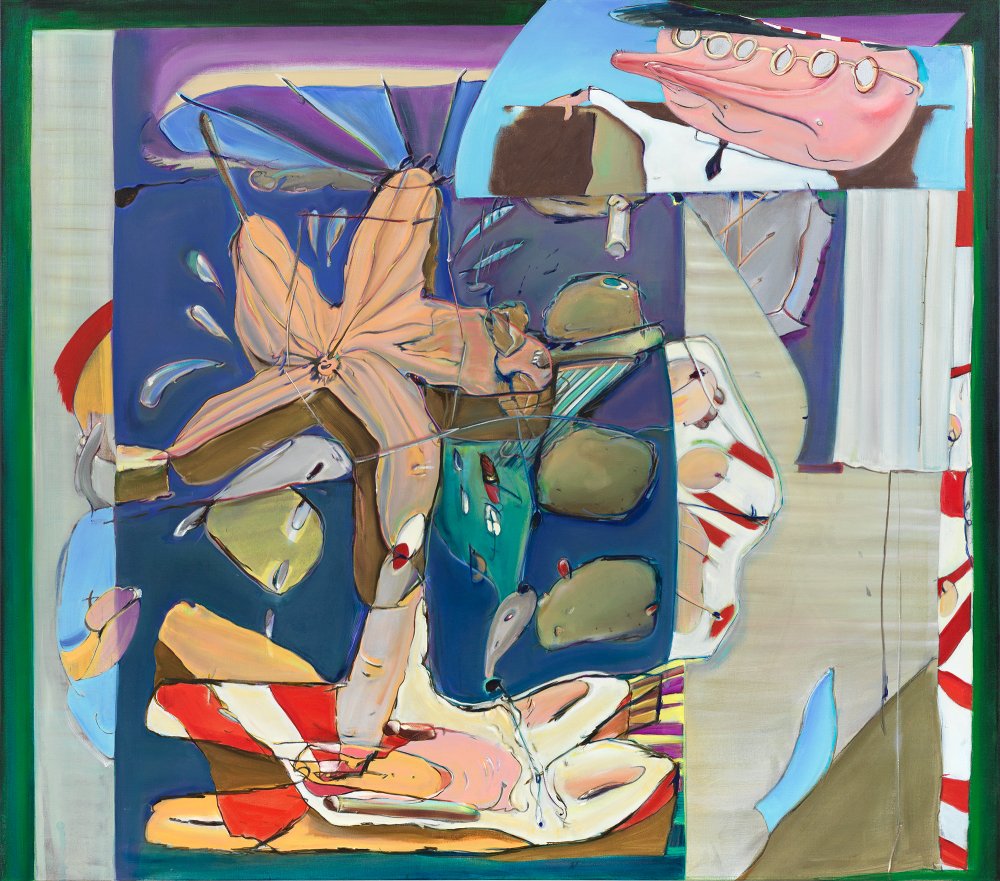 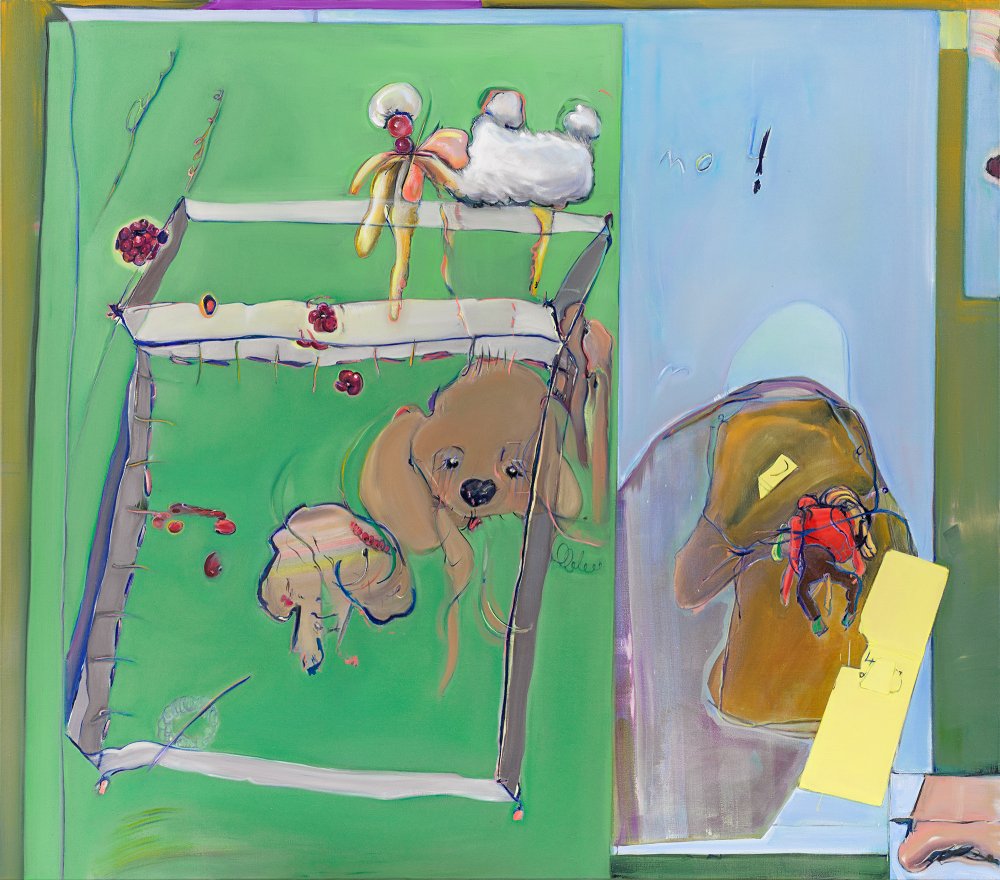 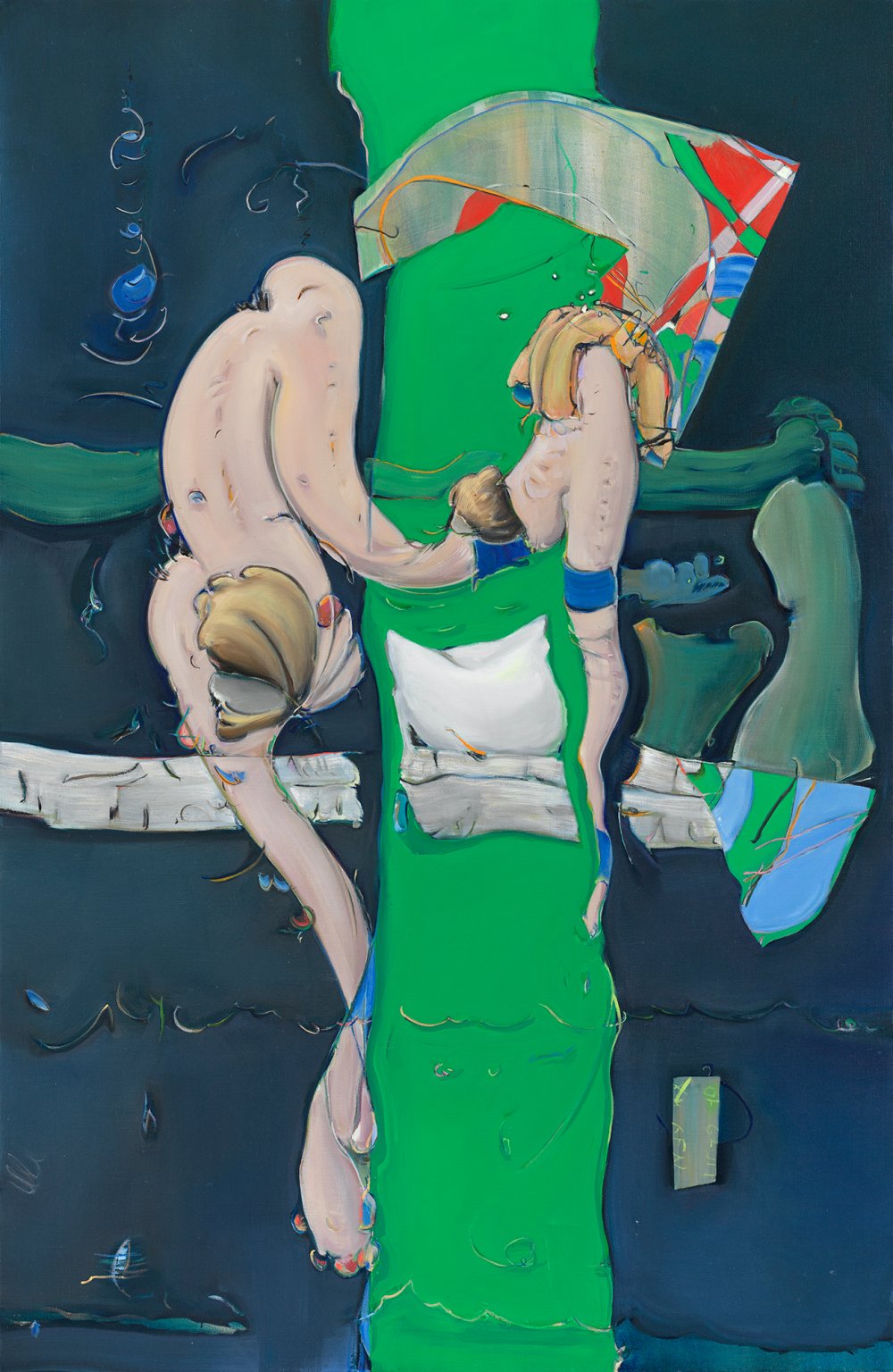 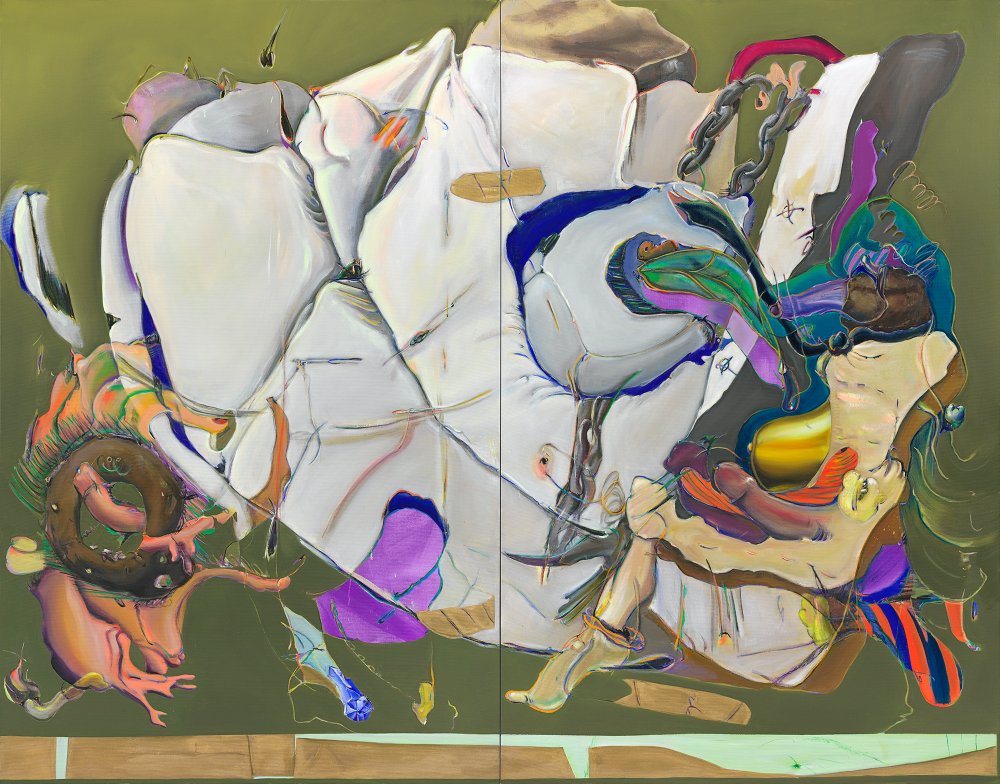 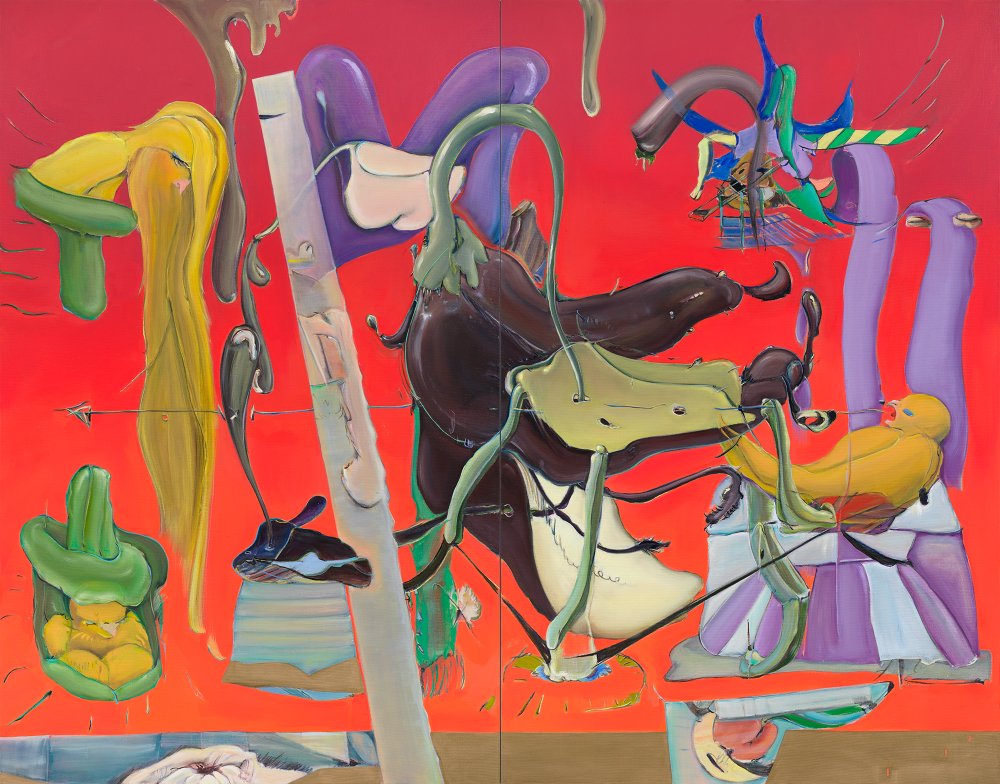 Stefanie Heinze
A Hollow Place in a Solid Body, 2020 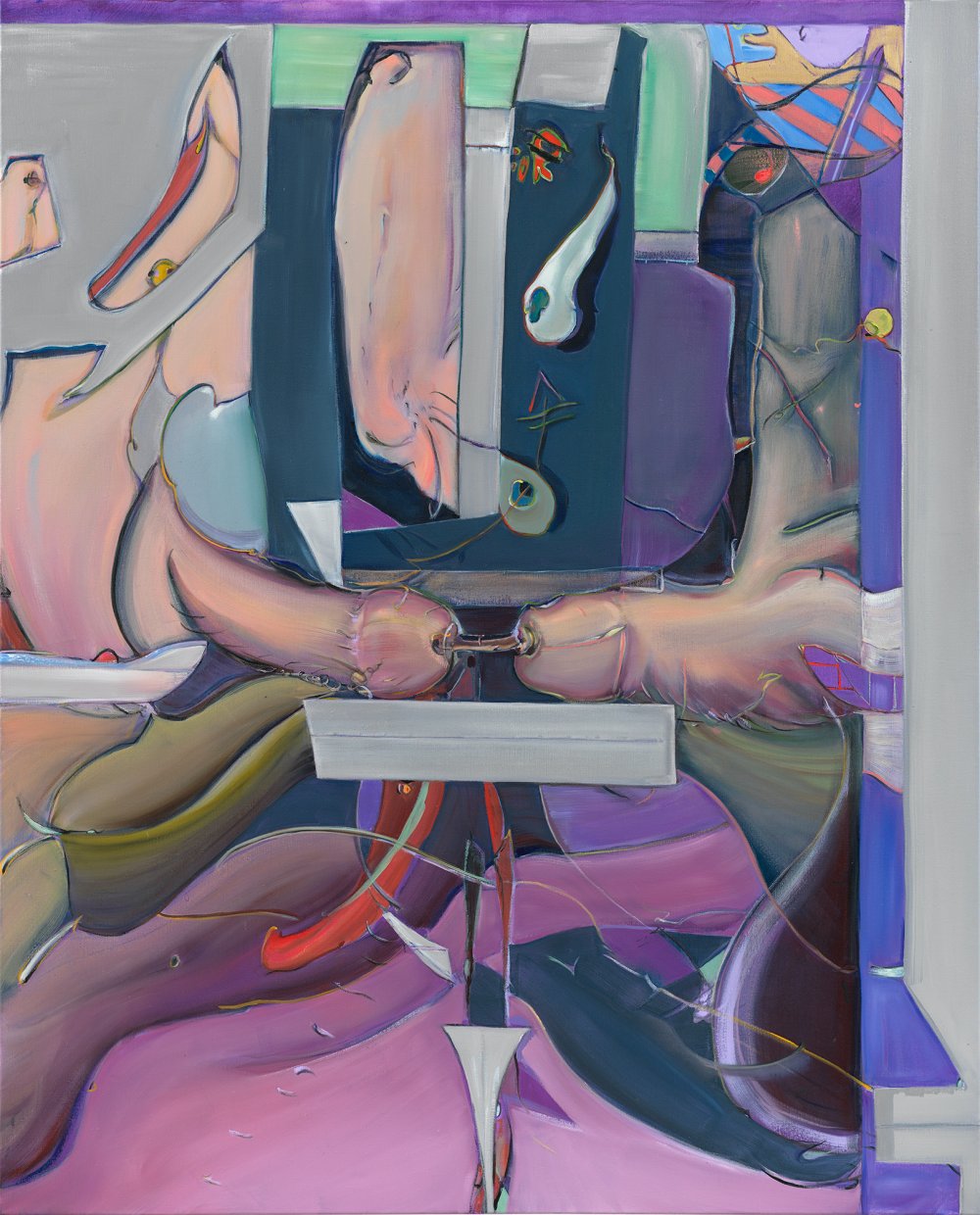 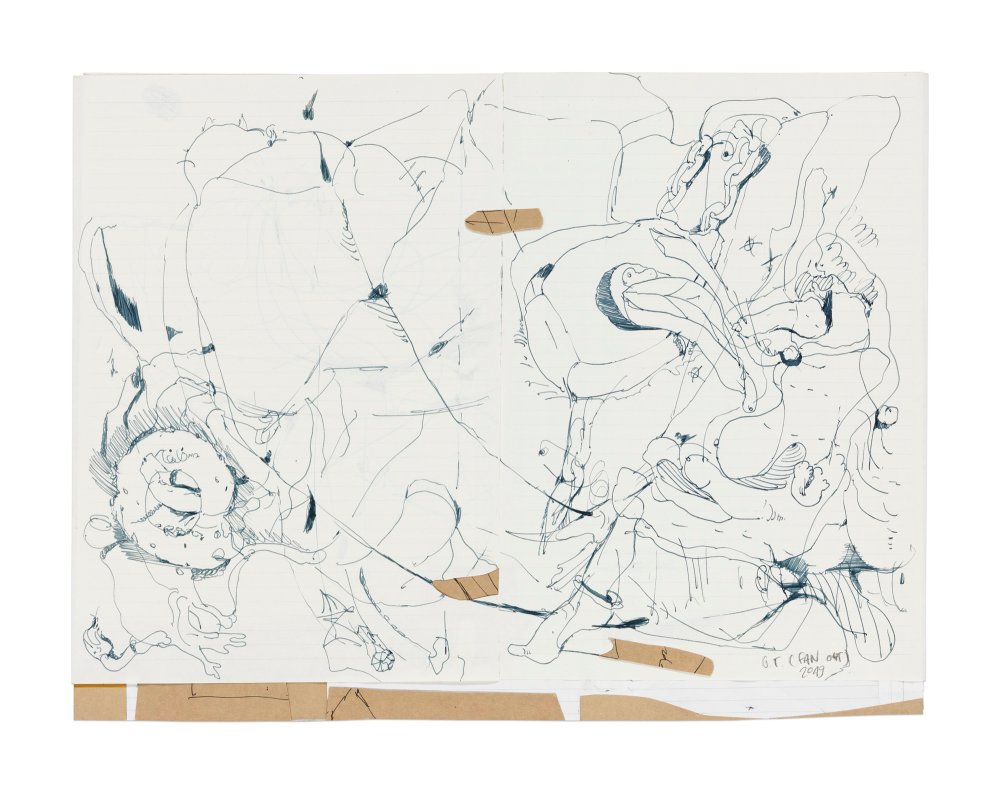 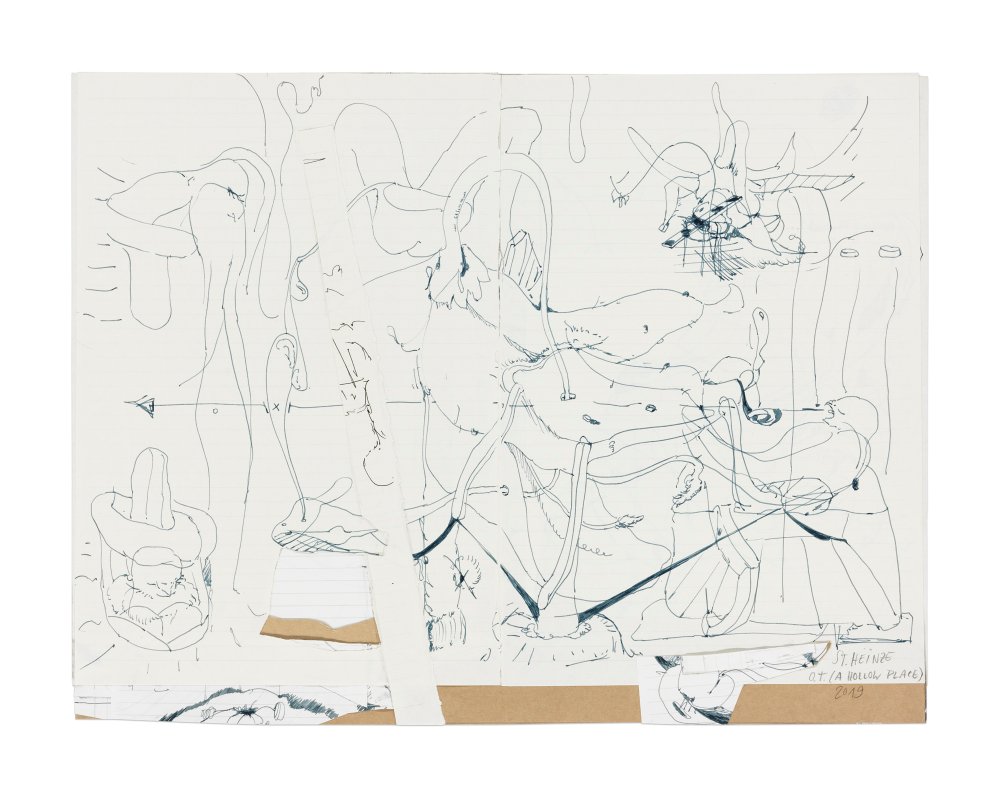 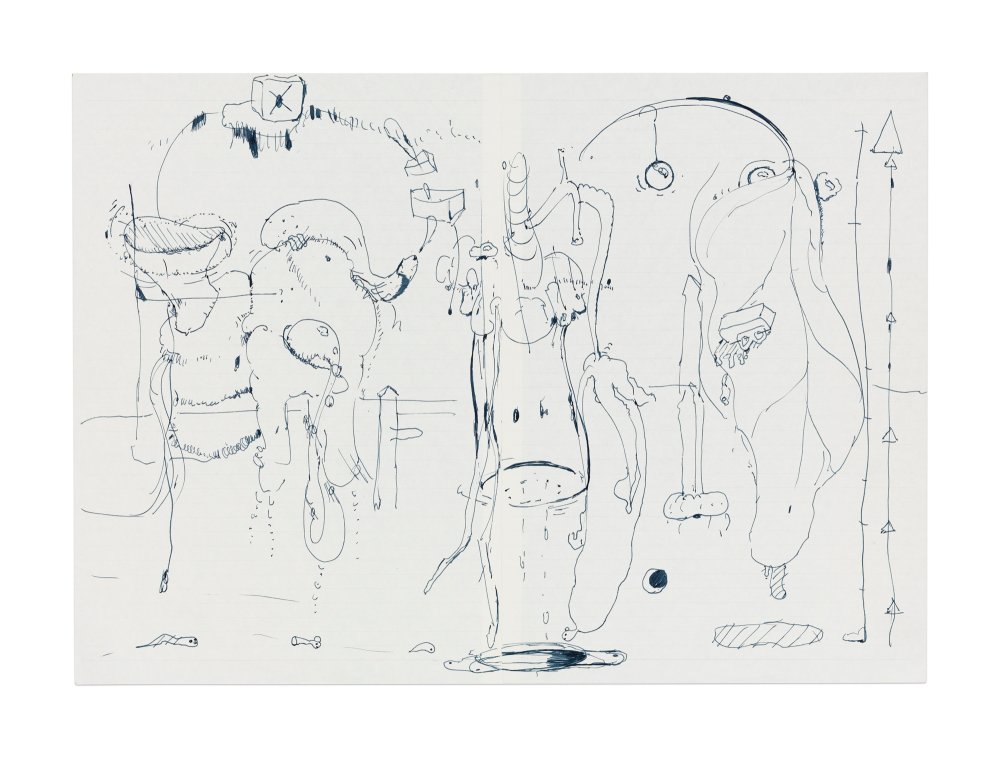 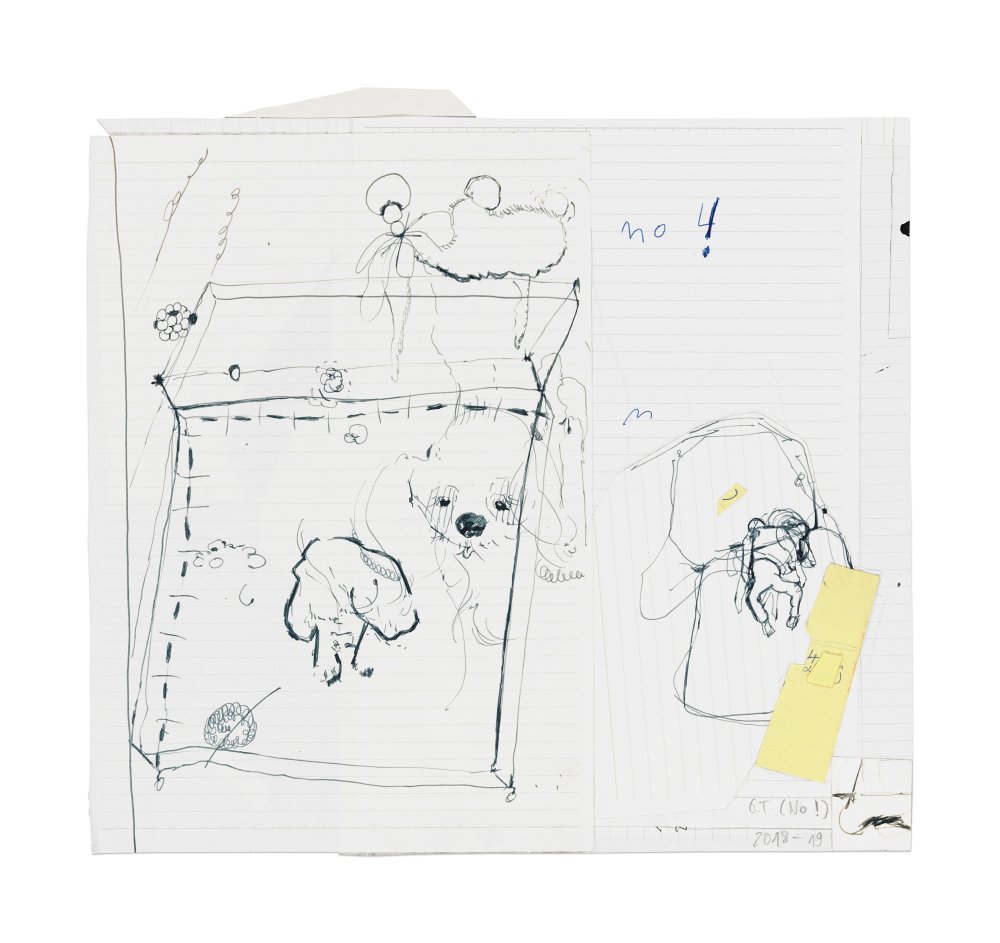 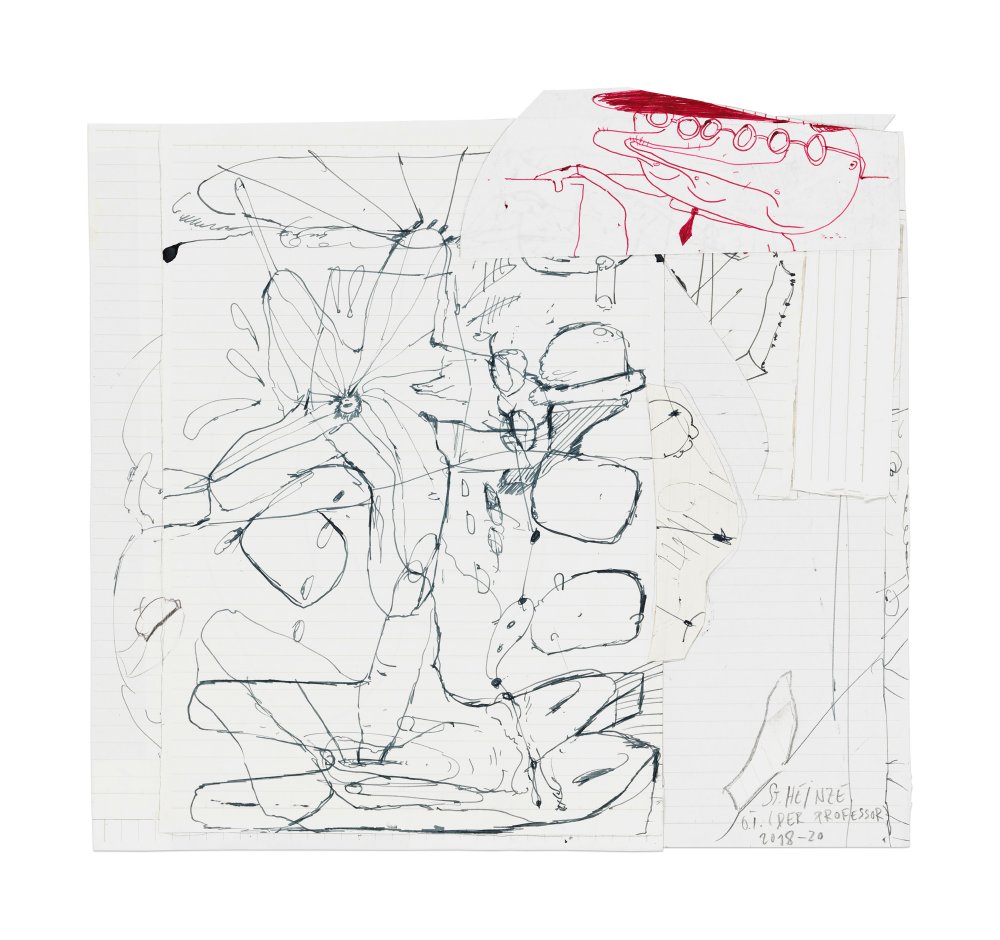 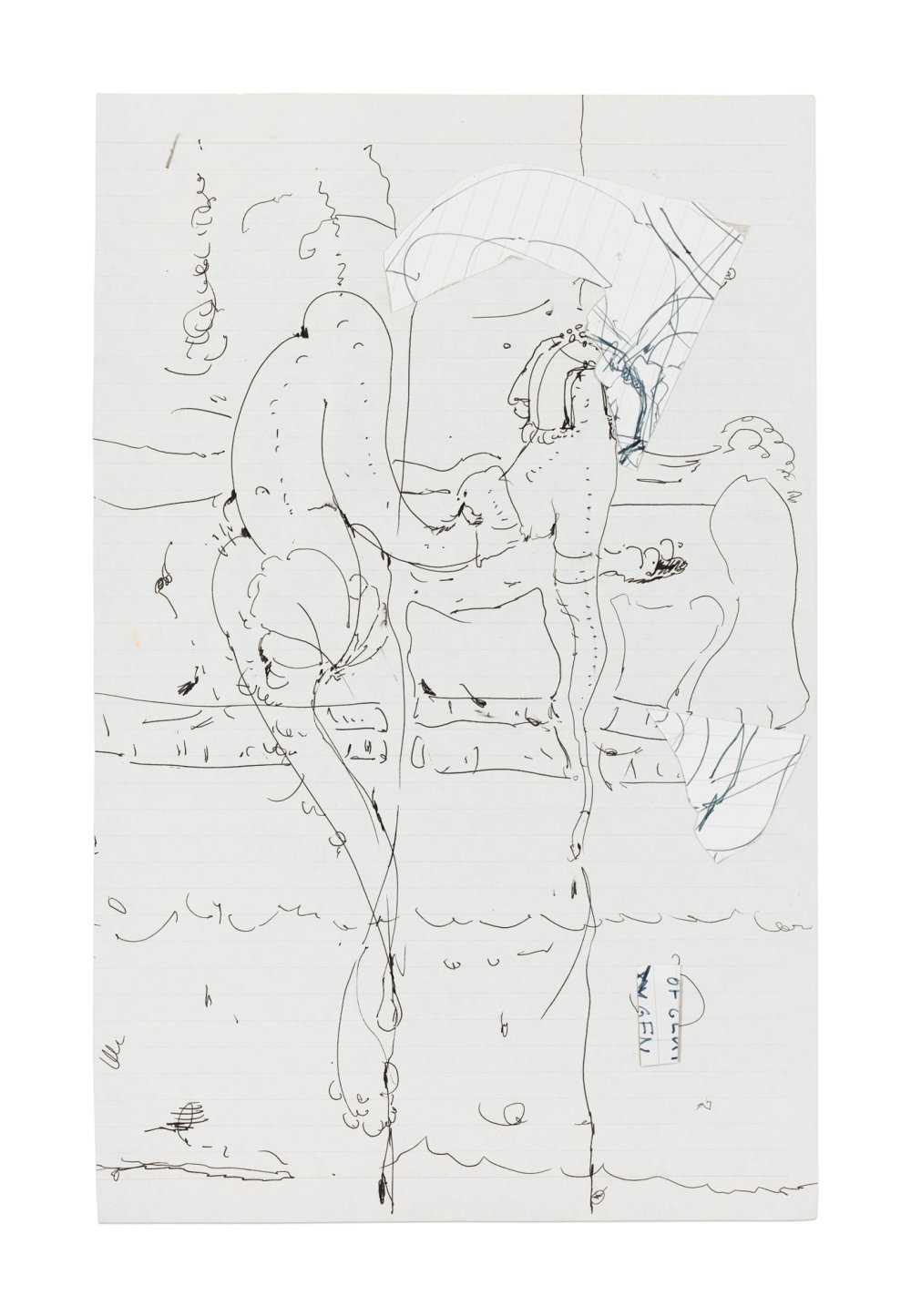 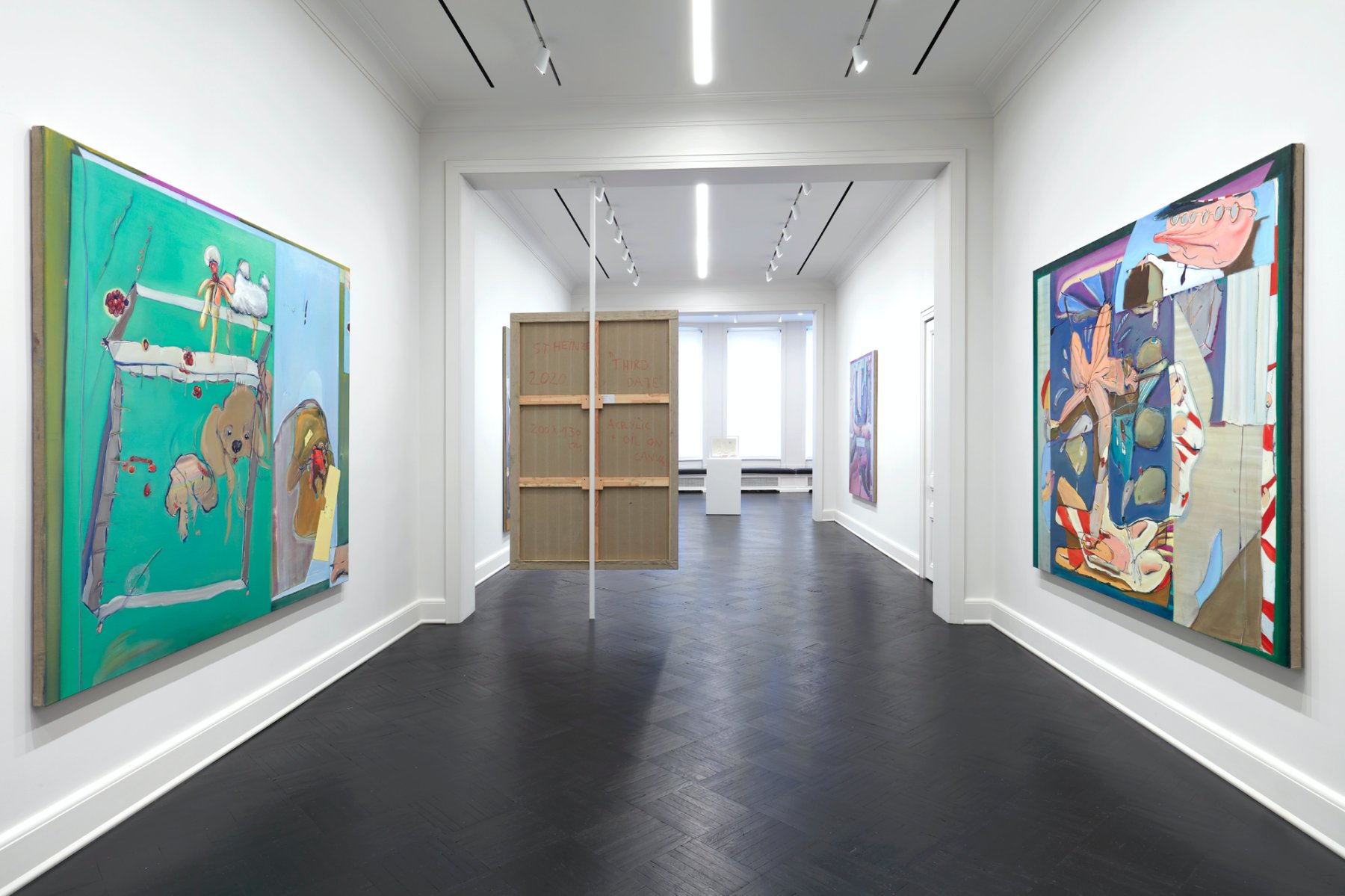 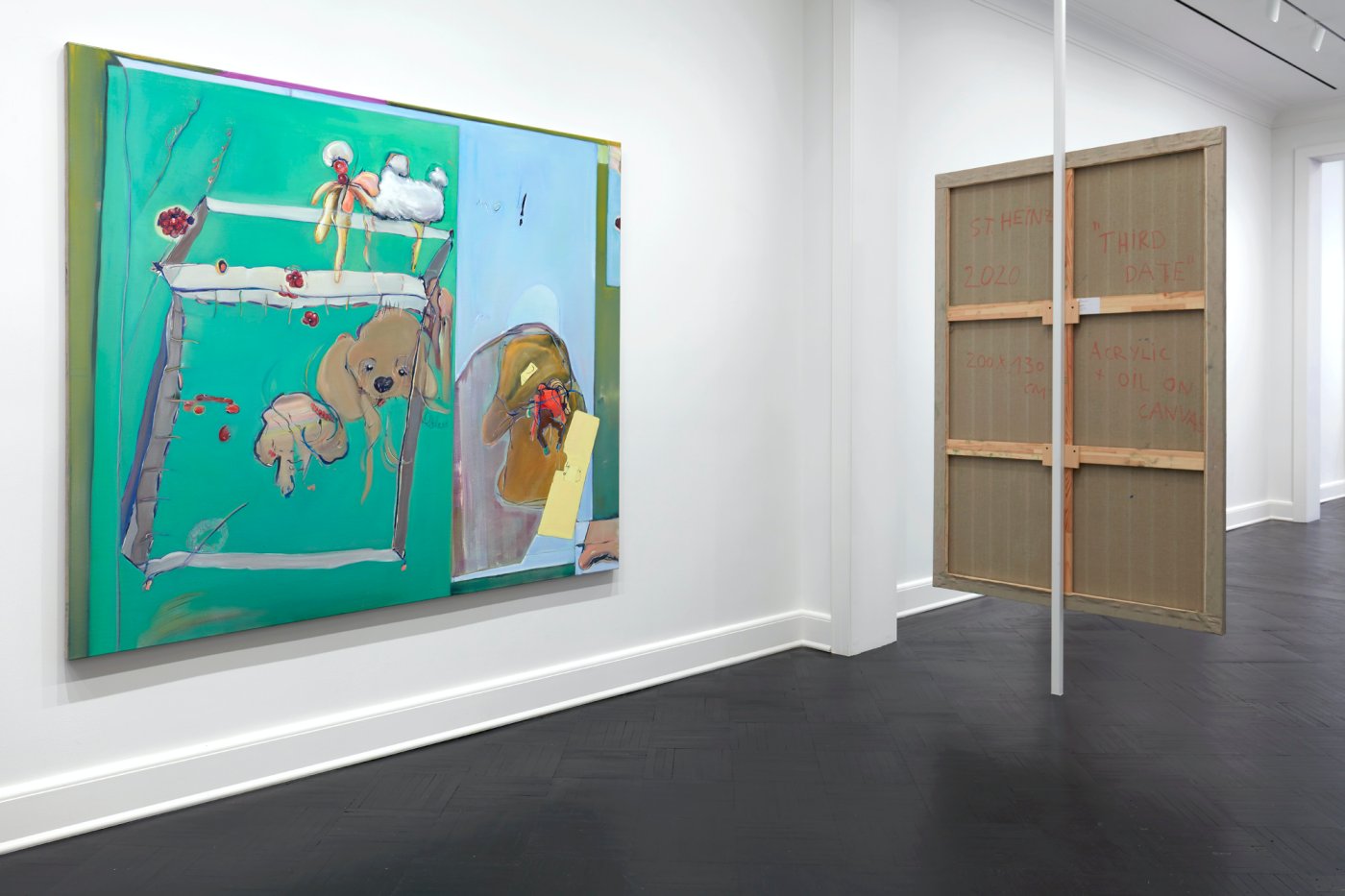 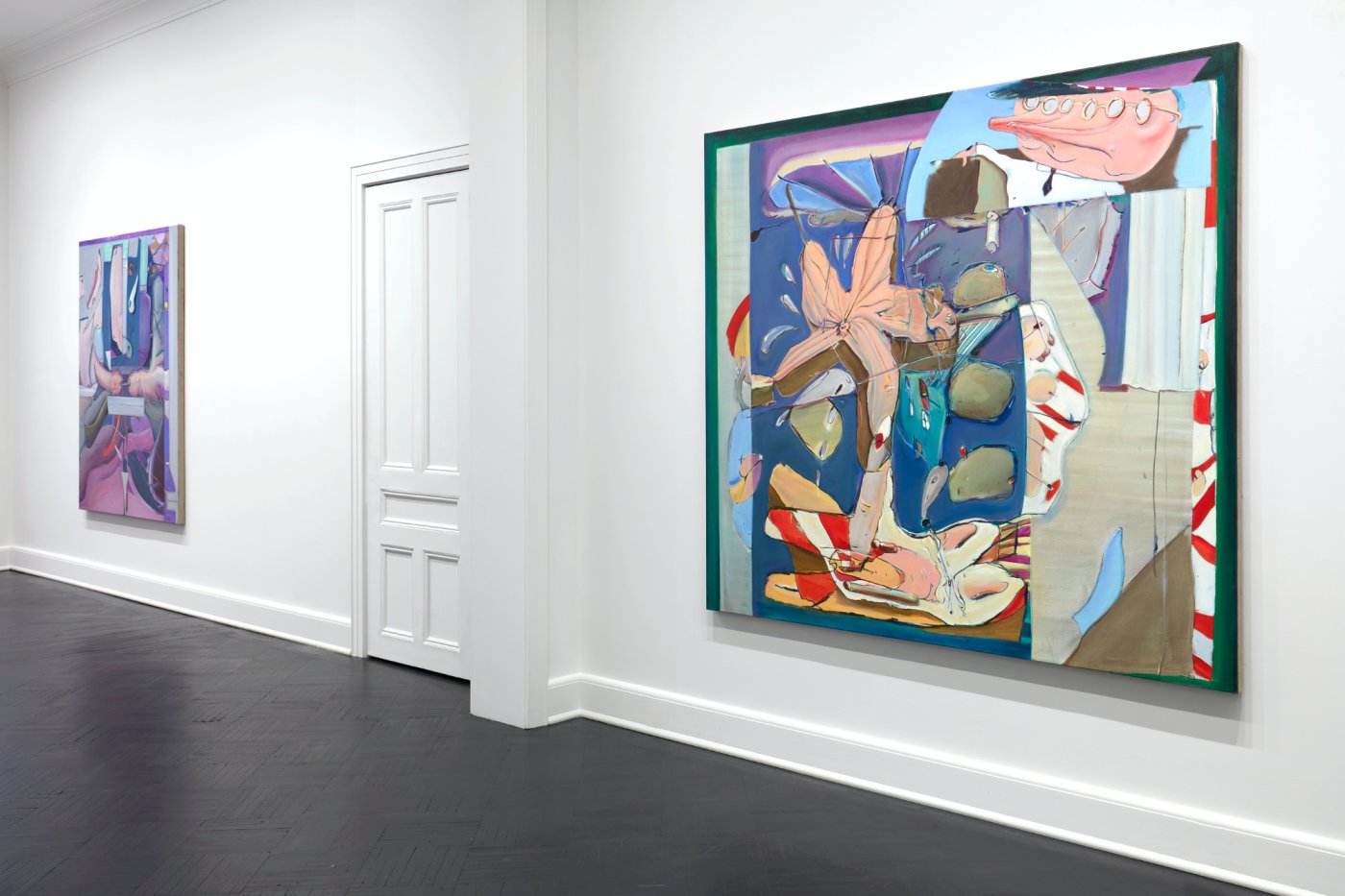 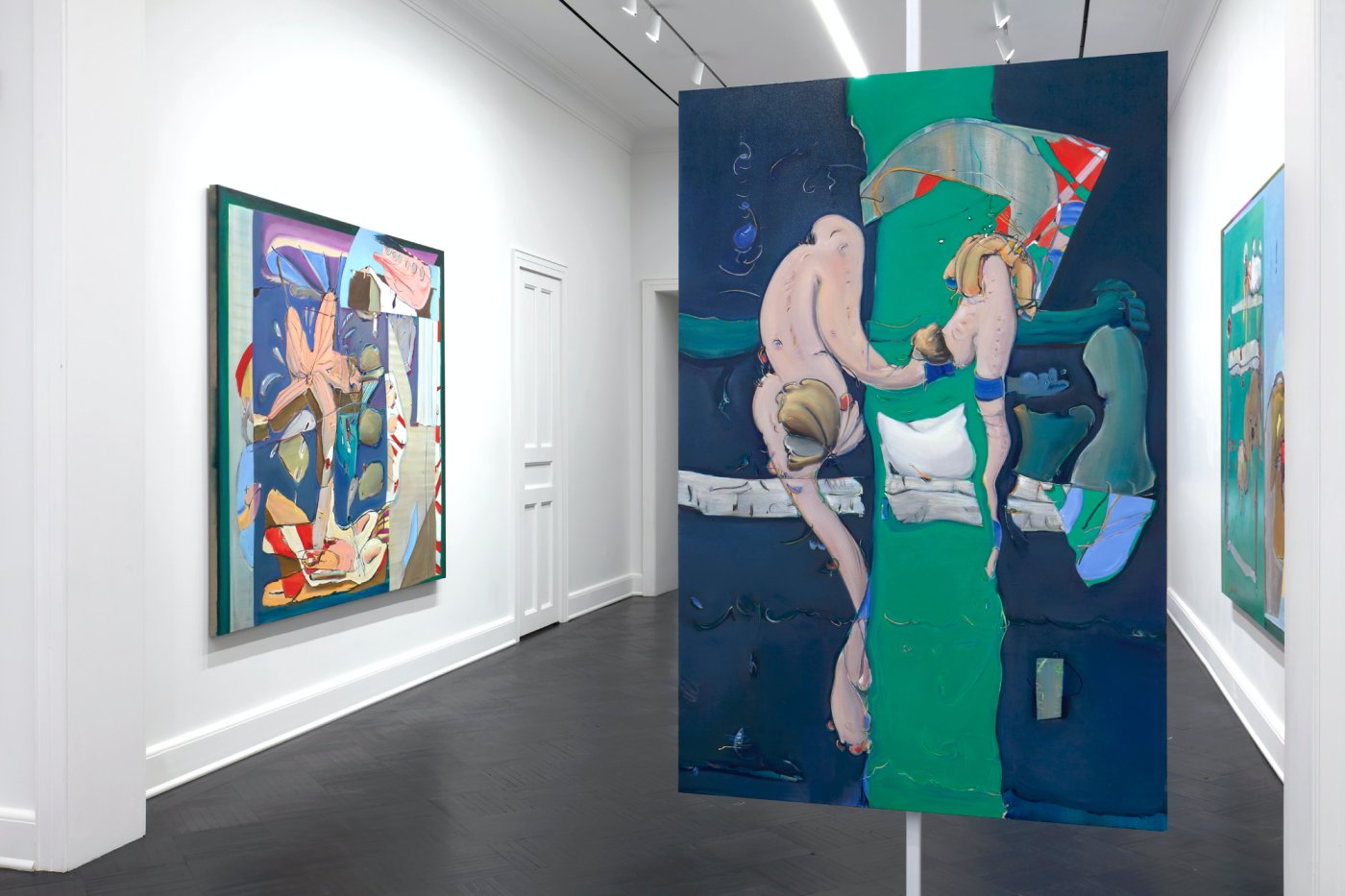 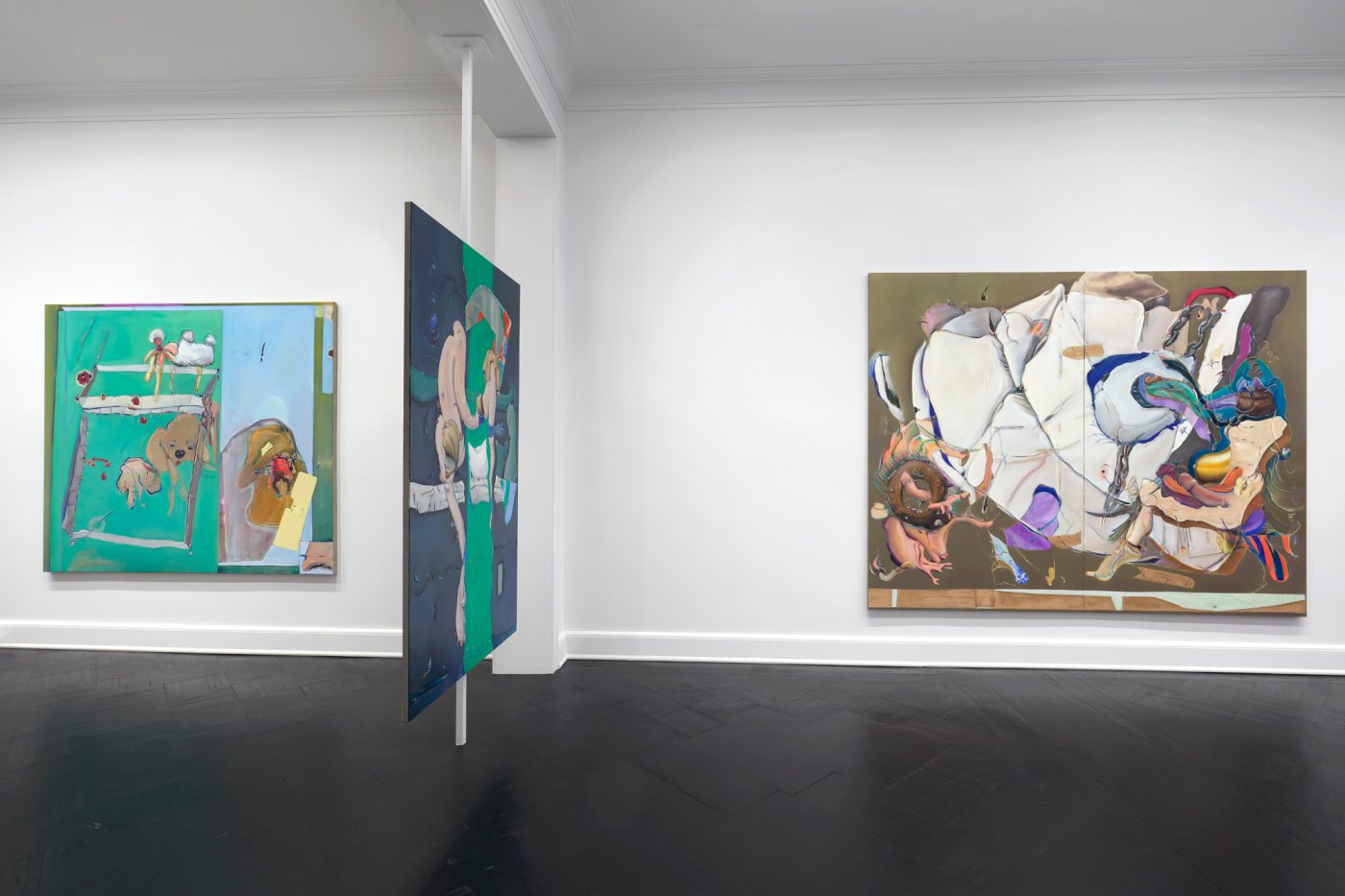 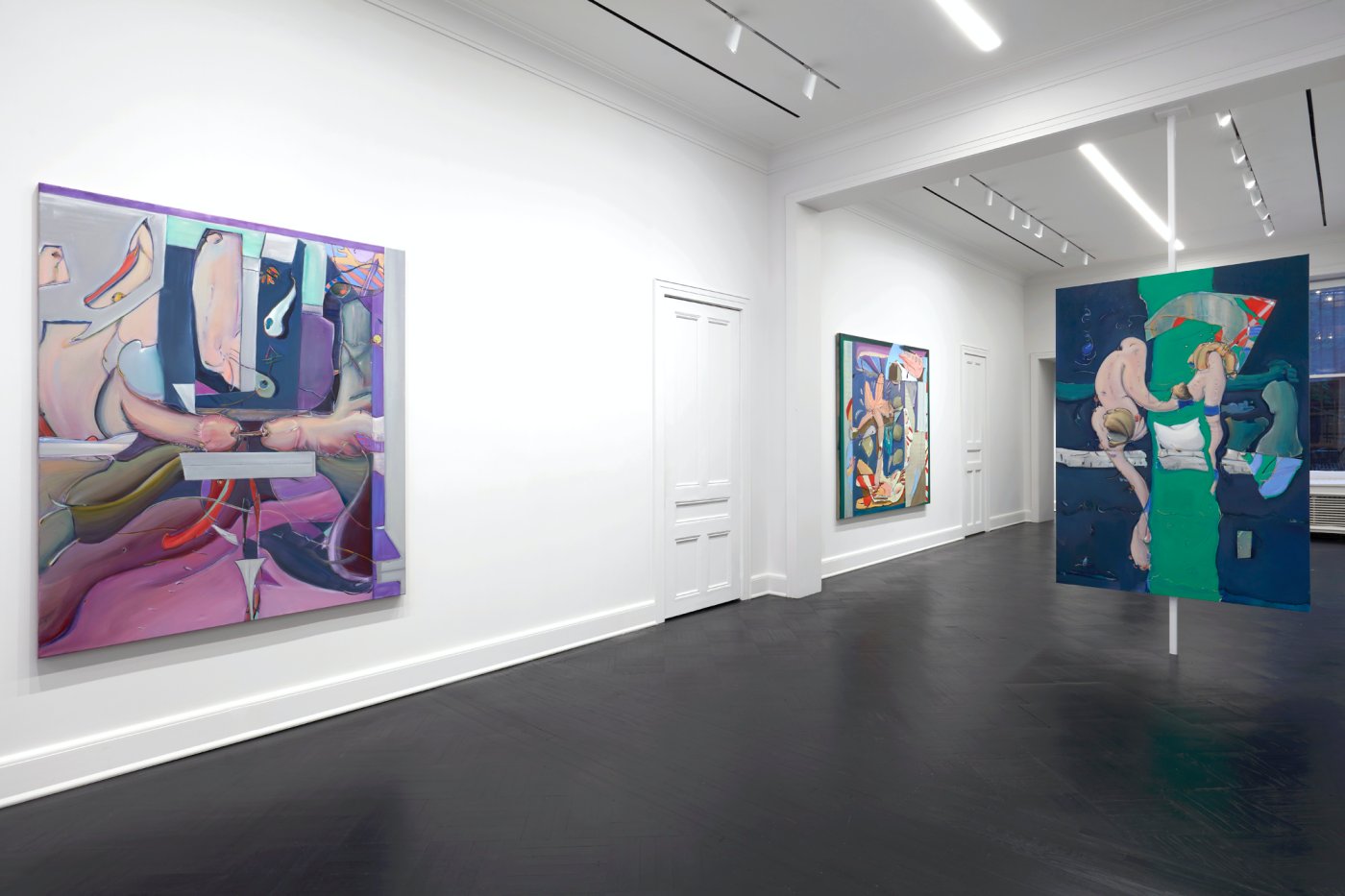 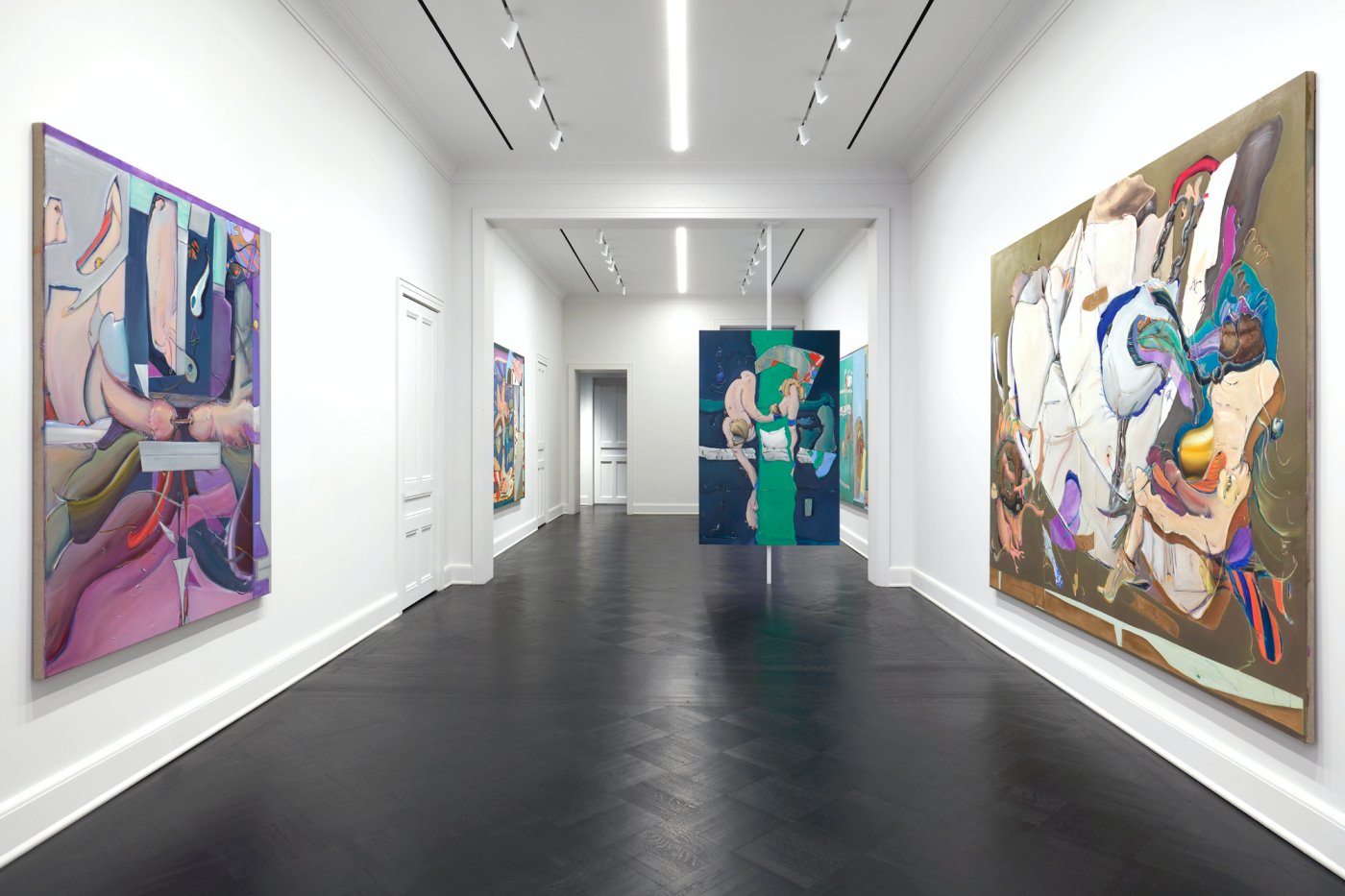 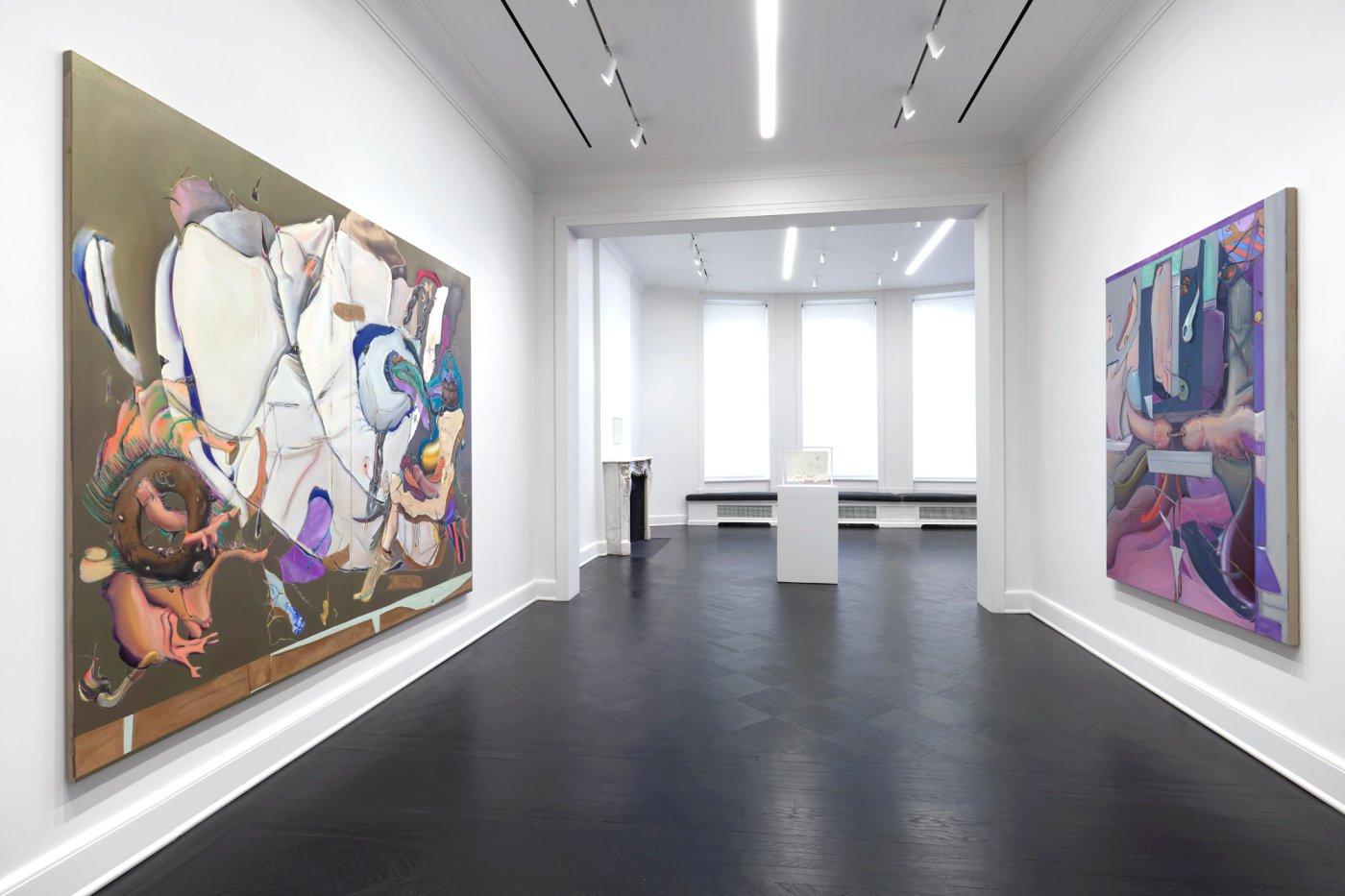 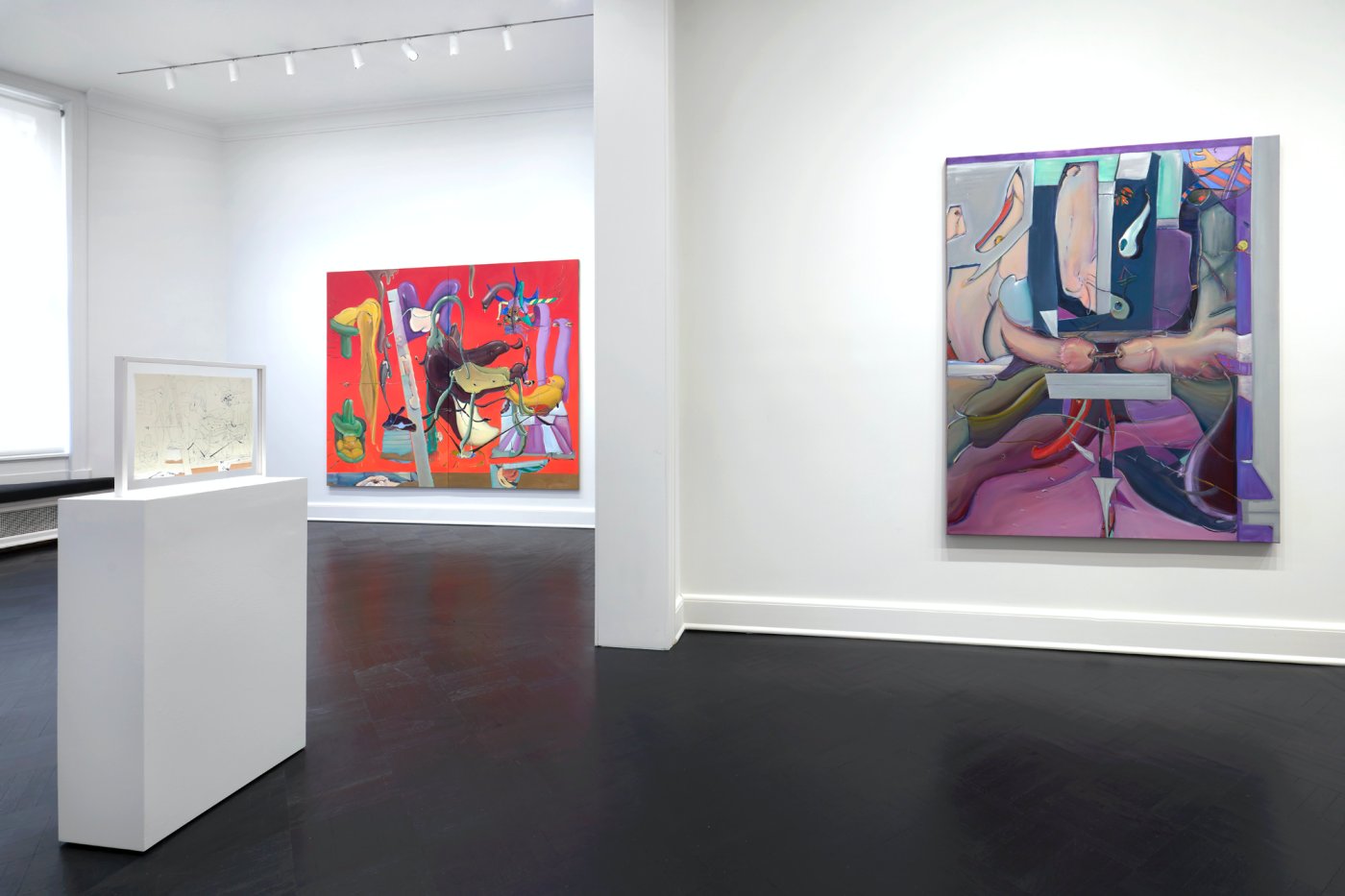 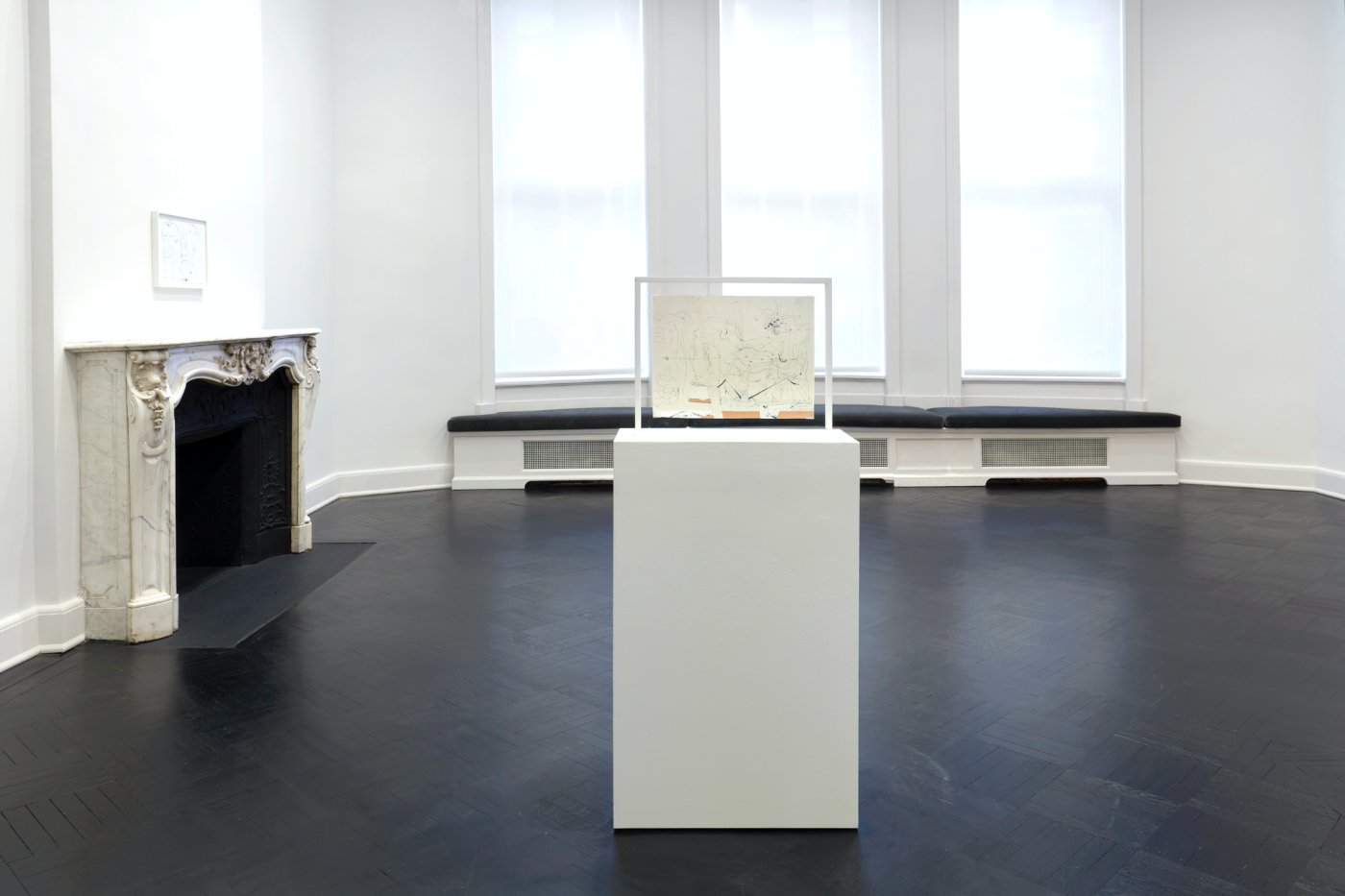 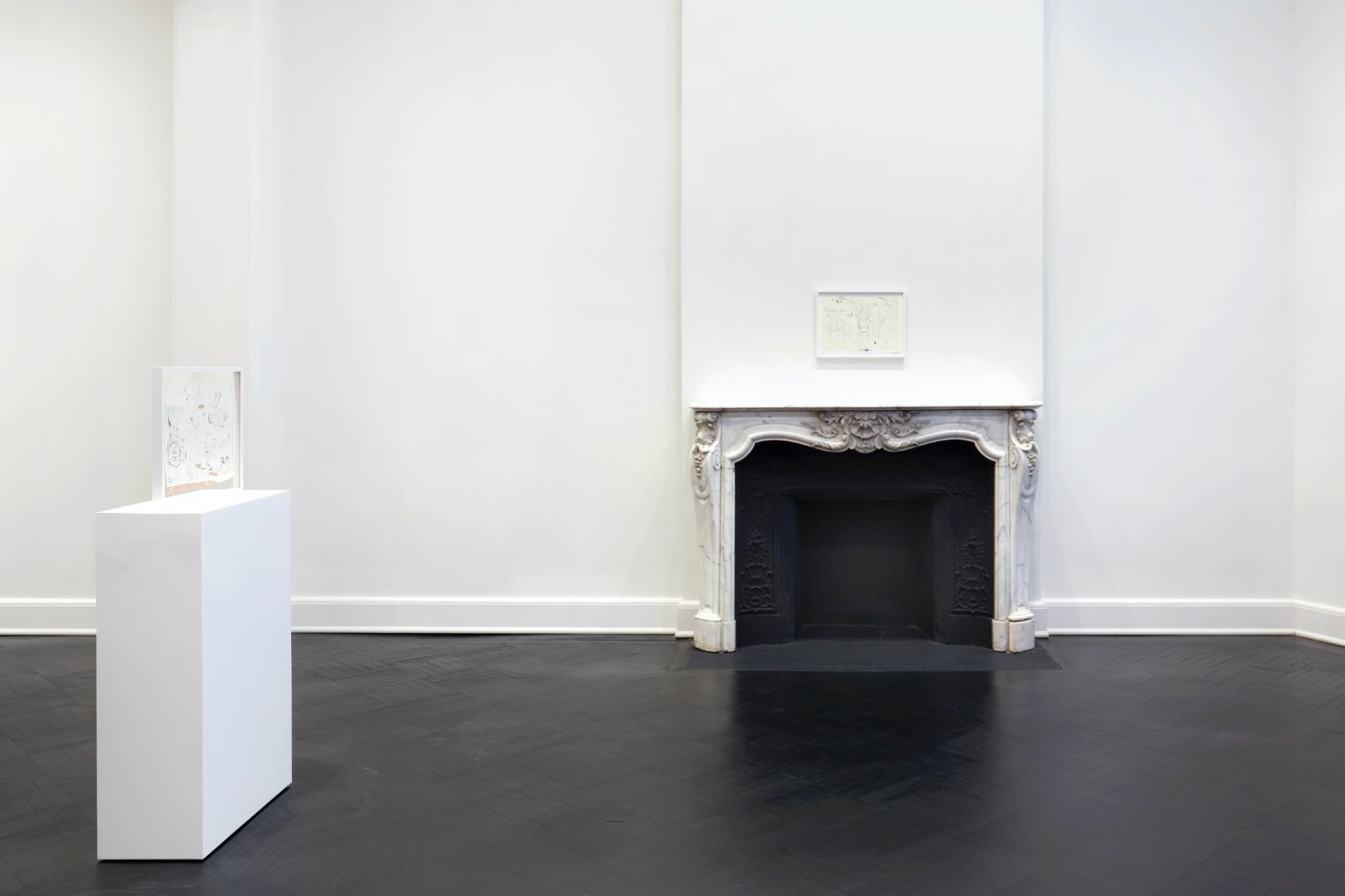 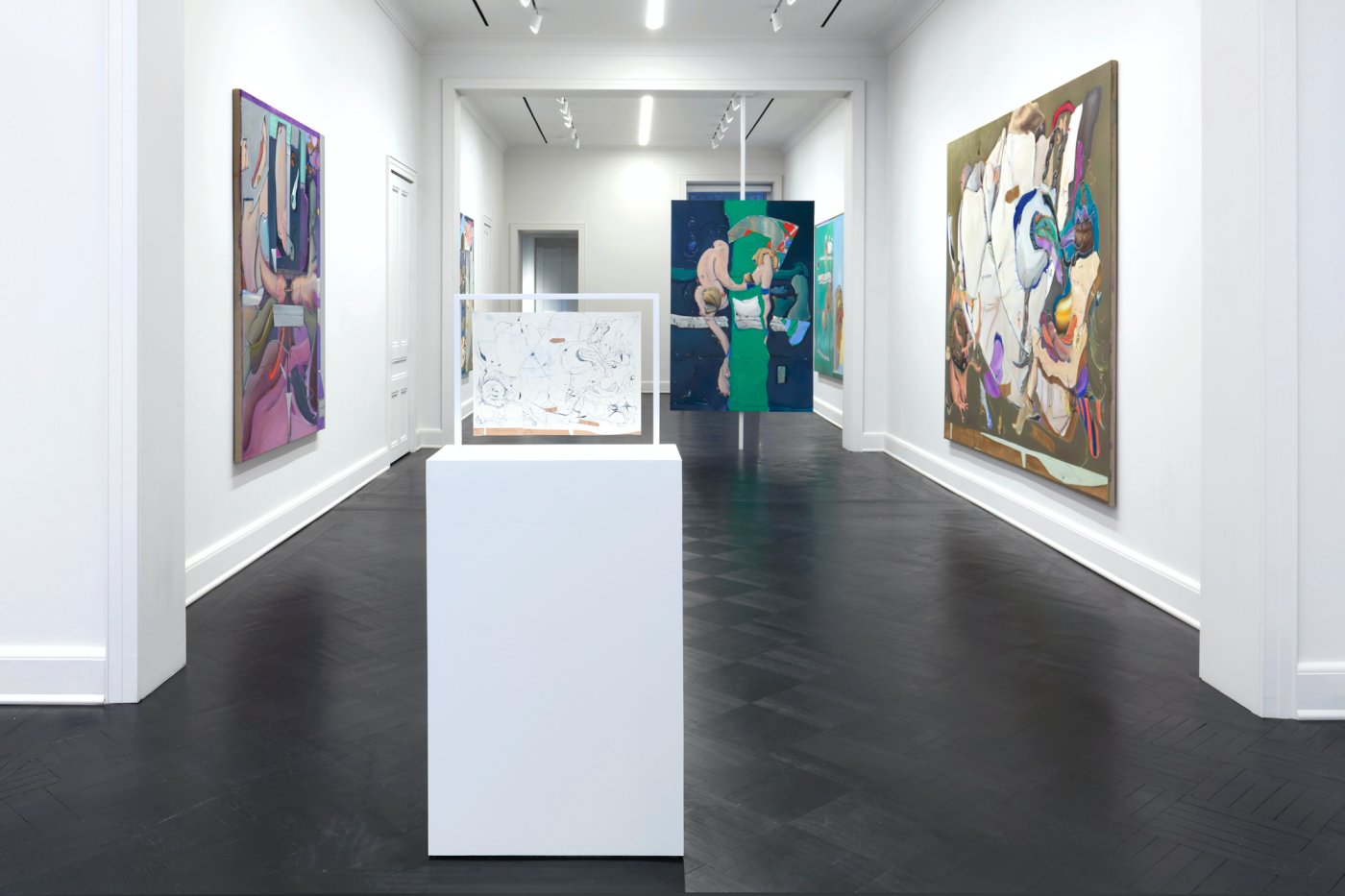 The show marks Heinze’s debut exhibition at Petzel and second solo show in New York. Encompassing six paintings (all 2020), and four works on paper — two shown as double-sided drawings on pedestals — the works in the show explore the dissolution of historical norms and the paradoxes that arise when investigating power structures.

Heinze works from a process of coupling collaged drawings to paintings, starting on paper not strictly as studies but as companions. For Heinze, the act of drawing and collaging is a form of intuitive notetaking that then becomes a retracing of thoughts, almost like attempting to remember a dream, when applied to canvas. She aims to portray the familiar in ways she feels she has not yet seen; relatable objects take on new identities, complicated within the painting process and the translation from lines and ink into a repetition of shapes that fall somewhere between the figurative and the abstract. Her colors work in unexpected ways in vividly subversive worlds, what might first appear as a surrealist landscape will, in fact, turn out to be something else entirely.

For this show, Heinze’s signature fantastic and impossible encounters, composed of playful, transformative, and (a)sexual motifs, are on full display. In these works, Heinze gives emphasis to the “small beings” — the subordinate, the banal — as memory mixes with utopian visions in surprising moments across canvas. She extracts the more indigestible themes of everyday life into fluid landscapes of absurd creations where giant eggplants and raspberry globules whiz around the composition, circling a puppy donning makeup, or a professor wearing many sets of glasses resting on multiple noses.

The exhibition is made up, in part, by two large diptychs of oil and acrylic on canvas — A Hollow Place in a Solid Body and Innerspring. In the former, a yellow canary, morphs into various states of being, ghostlike, while attempting to find a safe surrounding in a strident neon orange-pink background. Illustrated in plastic states of becoming something new, dynamic, and sensual, the birds are vulnerable yet resilient. Canaries appear in many of Heinze’s past works — she began drawing the figure in childhood when her family had one as a pet. She sees them as both loners and survivors, watching scenes play out with no autonomy over their life, while standing in as a friend, an ally, or perhaps even, a witness.

The second diptych, Innerspring matches the first in both dimension, orientation, and its centrally focused composition, with a mirroring horizon-like strip at the bottom of the tableau. Despite these visual similarities, the forms and objects described in Innerspring are directly opposite the vulnerability depicted in A Hollow Place. Steel chains, tousled mattresses, processed foods, and phallic forms protrude in a chaotic scene that seems to represent something much more repulsive: exuding dominance, influence, and entitlement, yet all characterized with a rather ridiculous flair.

This tension appears and reappears in various approaches across the exhibition, where traditional, rigid, and patriarchal structures become as banal as everything and everyone else. On one hand “frail” implies deficiency, and on the other, “juice” signals abundance — it drips, oozes, seeps, and flows, malleable and nourishing. Heinze asks us to explore the strength that lies within fragility, and what propositions of alternative forms of power and relation could look like.

In the short time since graduating from the Academy of Fine Arts in Leipzig, Heinze has exhibited widely. She has shown at Capitain Petzel, Berlin (2019); LC Queisser, Tbilisi (2019); Sammlung Philara, Düsseldorf (2019); Mary Boone Gallery, New York (2018); Pippy Houldsworth Gallery, London (2017) among others. She has participated in numerous group shows including at the Deichtorhallen, Hamburg (2020); Saatchi Gallery, London (2018); Tanya Leighton, Berlin (2017); Good Press, Glasgow (2016); basis, Frankfurt (2015). Heinze’s works are in the collections of the Institute of Contemporary Art, Miami, Staatliche Kunstsammlungen, Dresden and the Marguerite Hoffman Collection, Dallas.