Lisson Gallery reopens its New York galleries with an exhibition of 17 of its artists, exploring chromatic themes in their work as well as the aesthetics and emotions related to color – towards an attempt at perceptual recalibration. 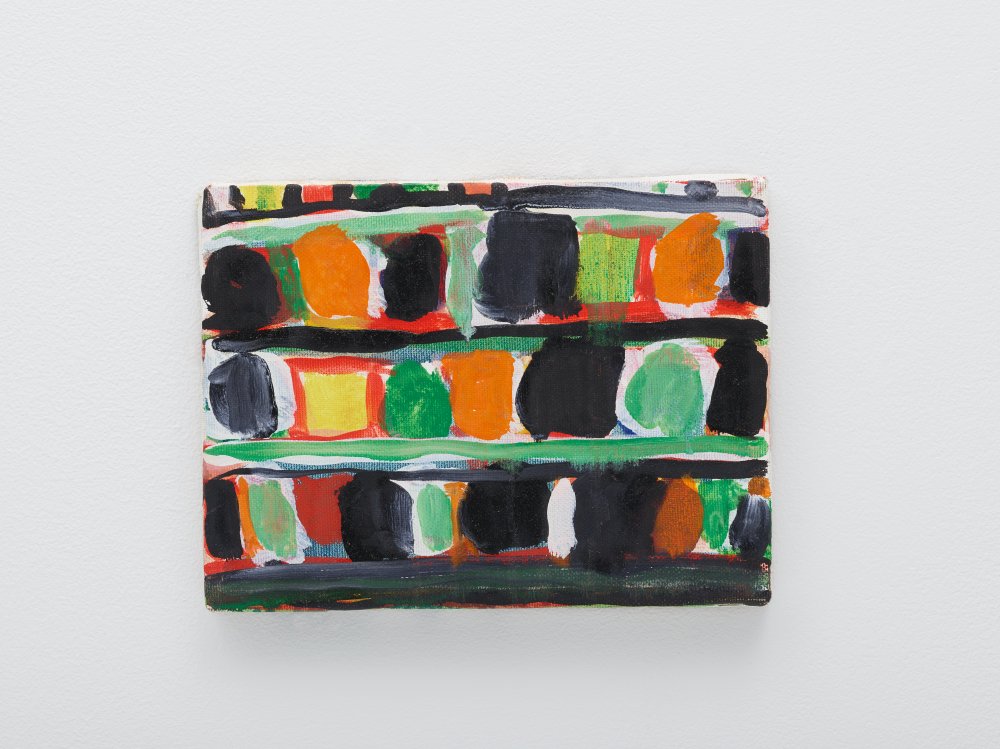 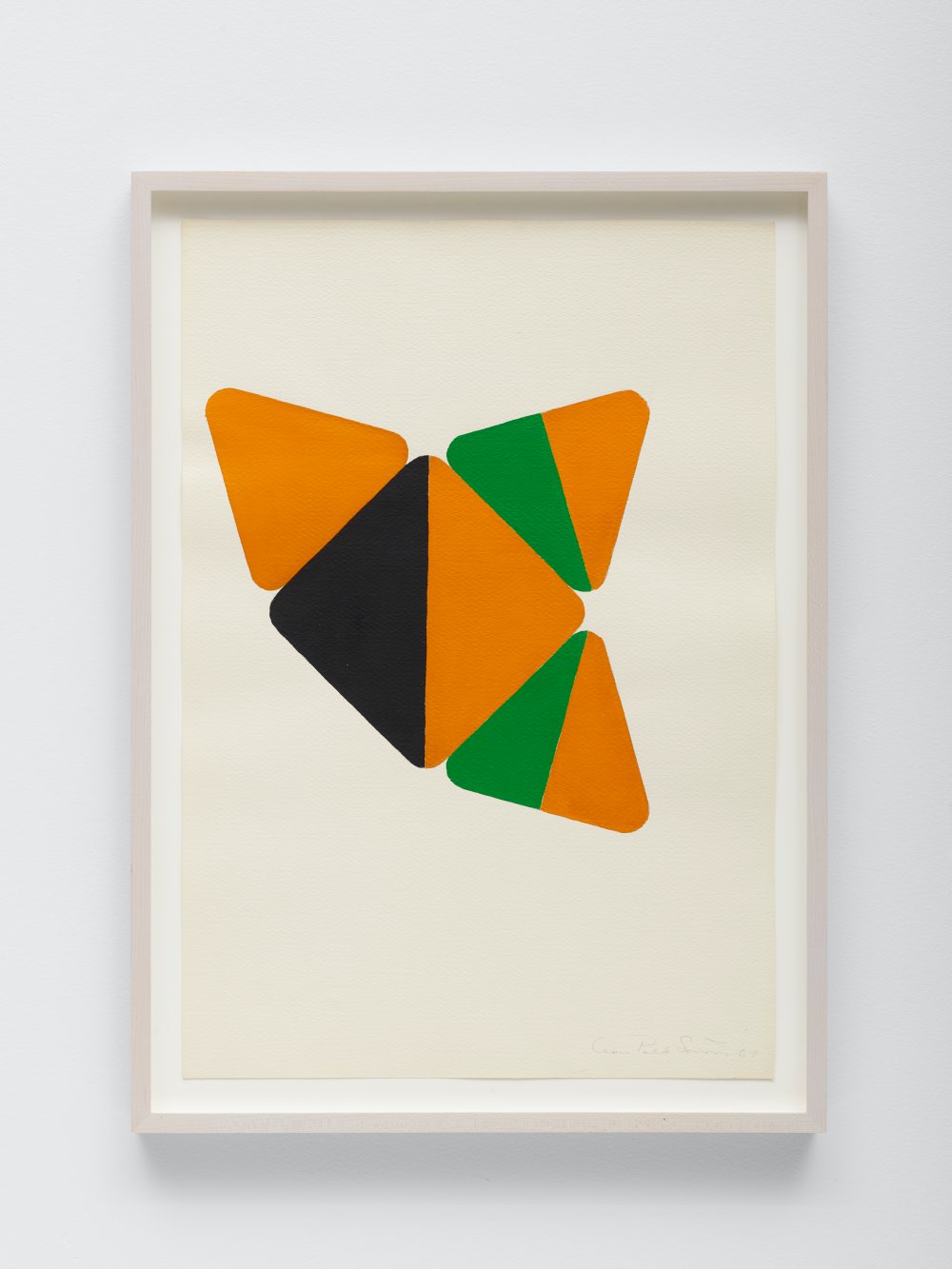 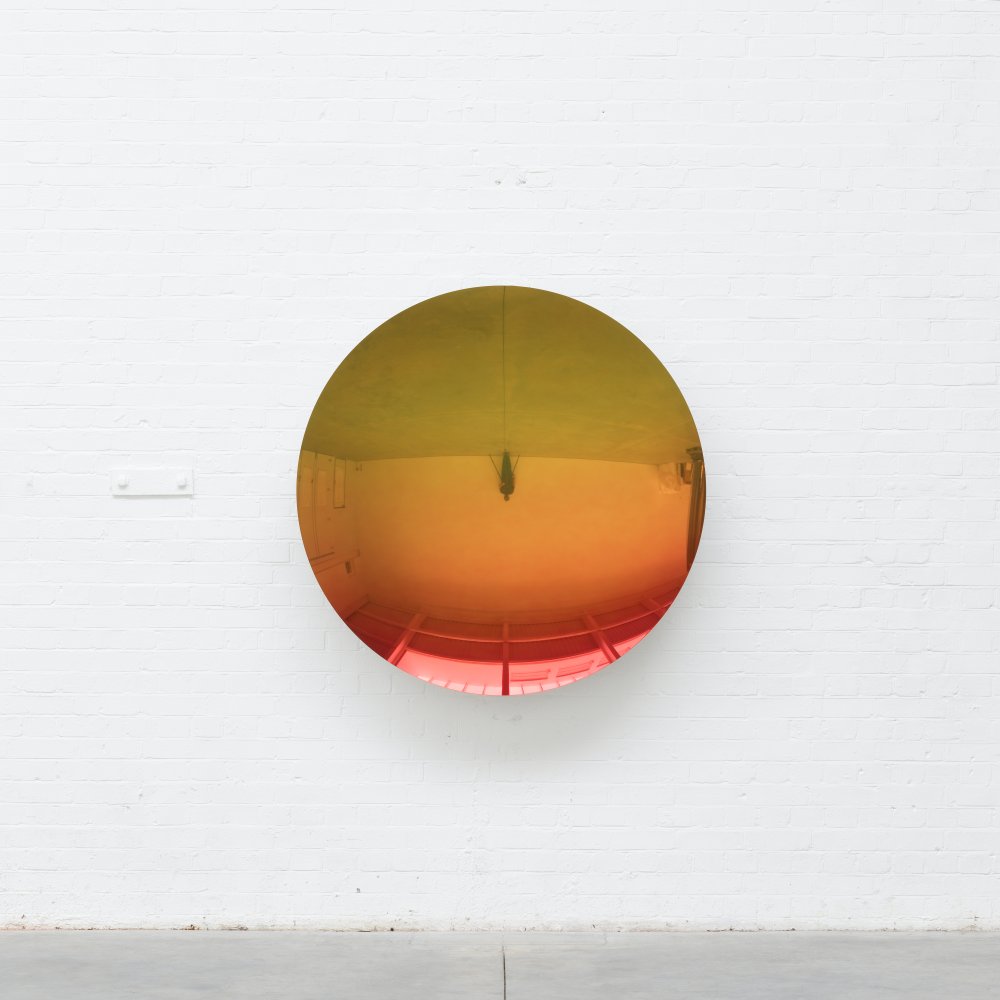 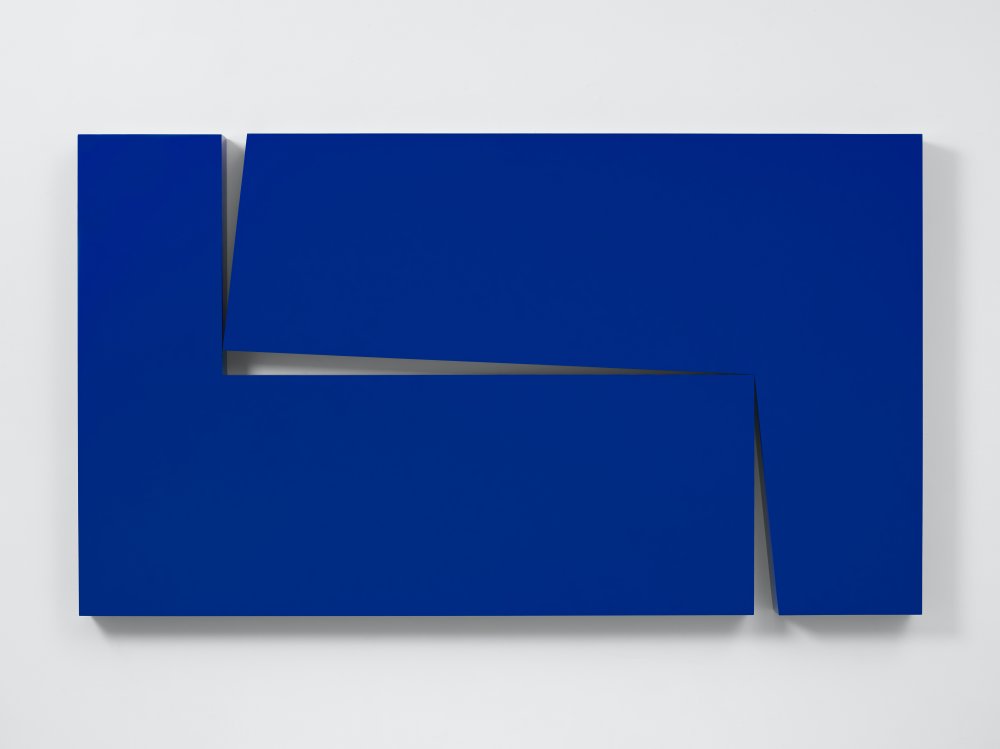 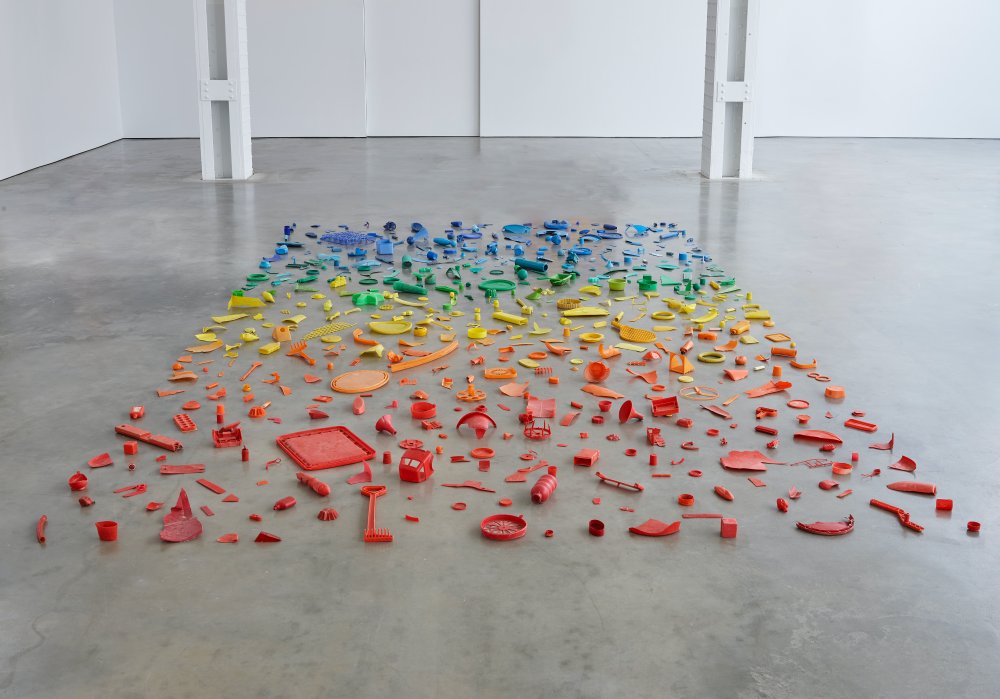 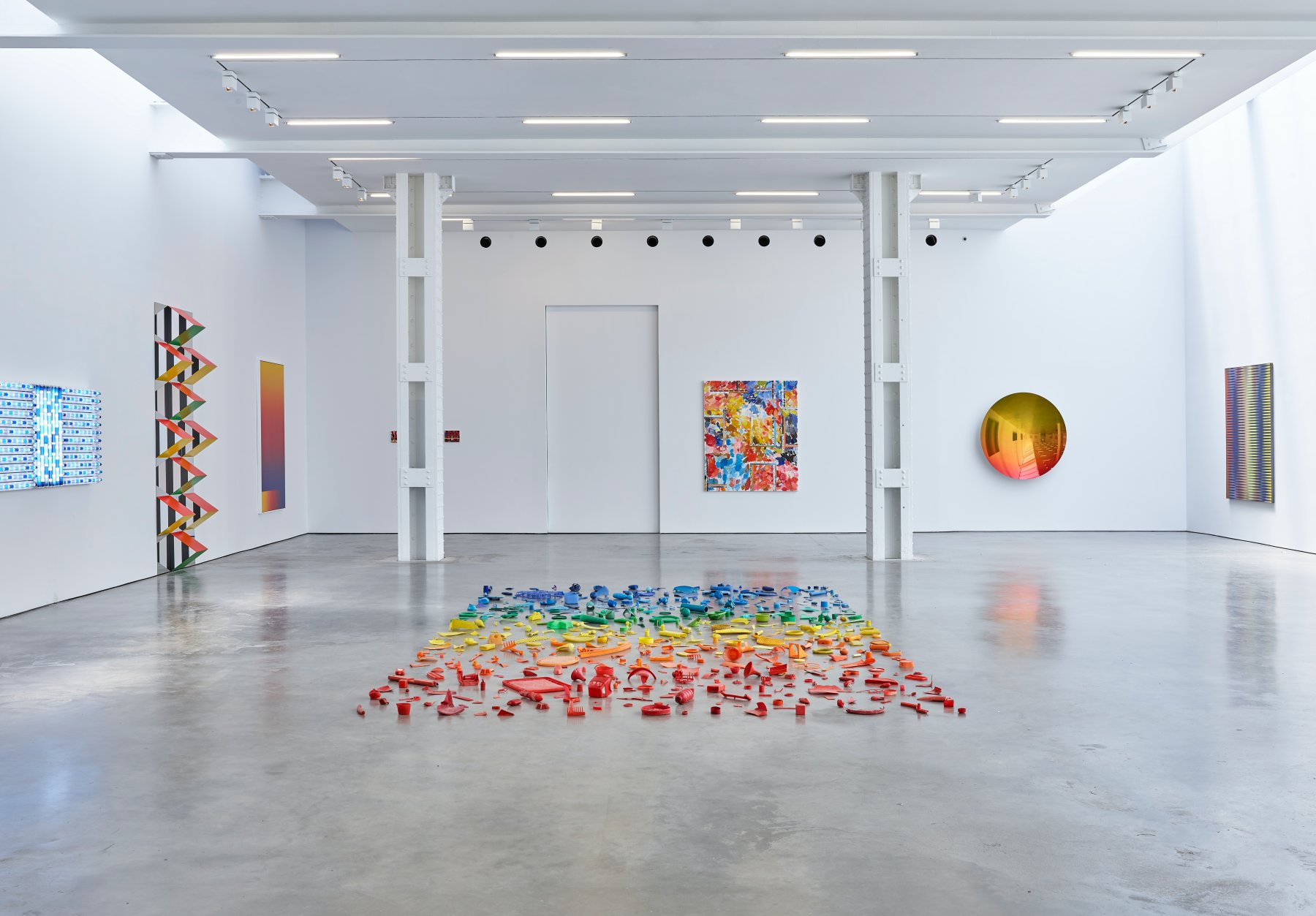 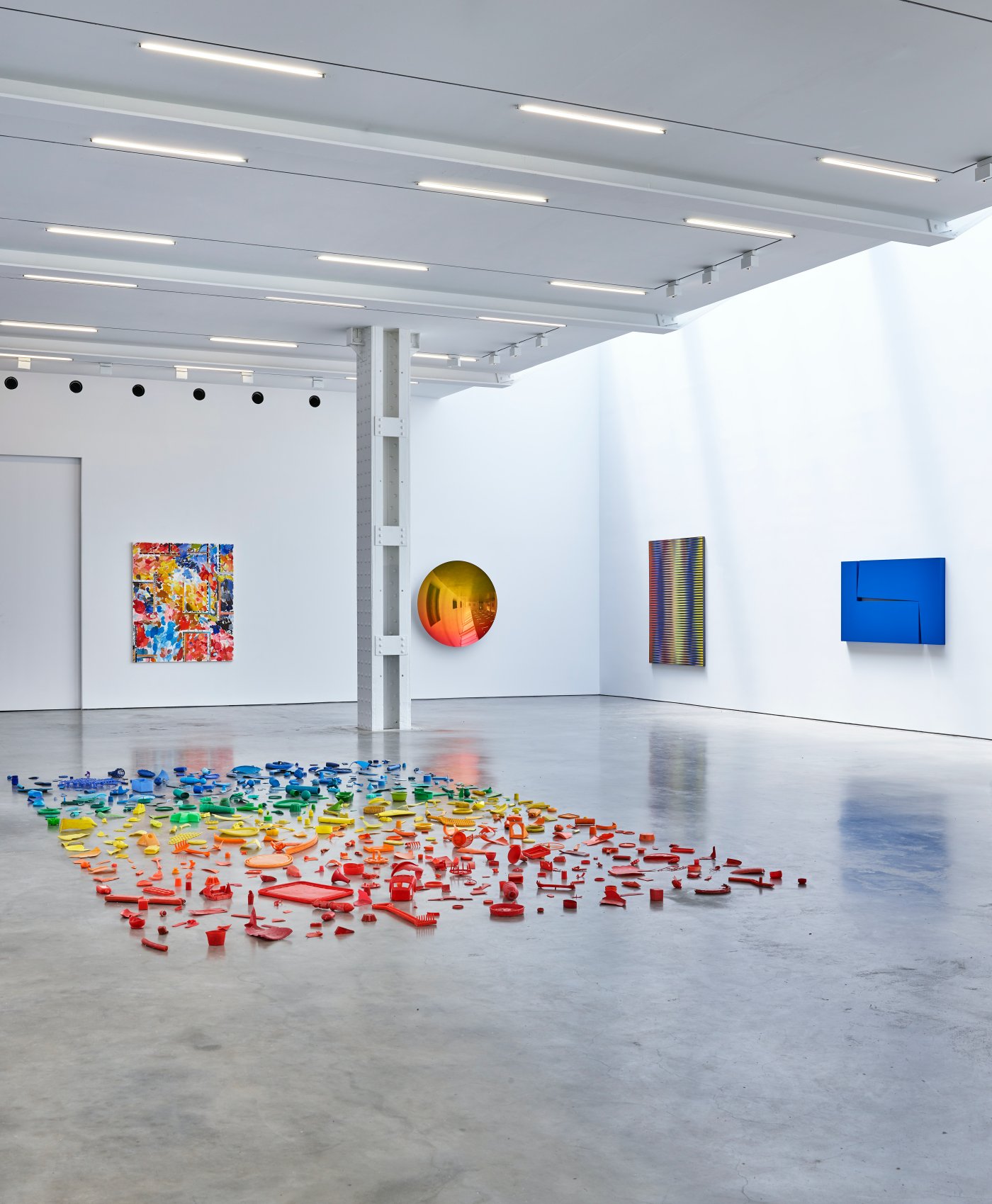 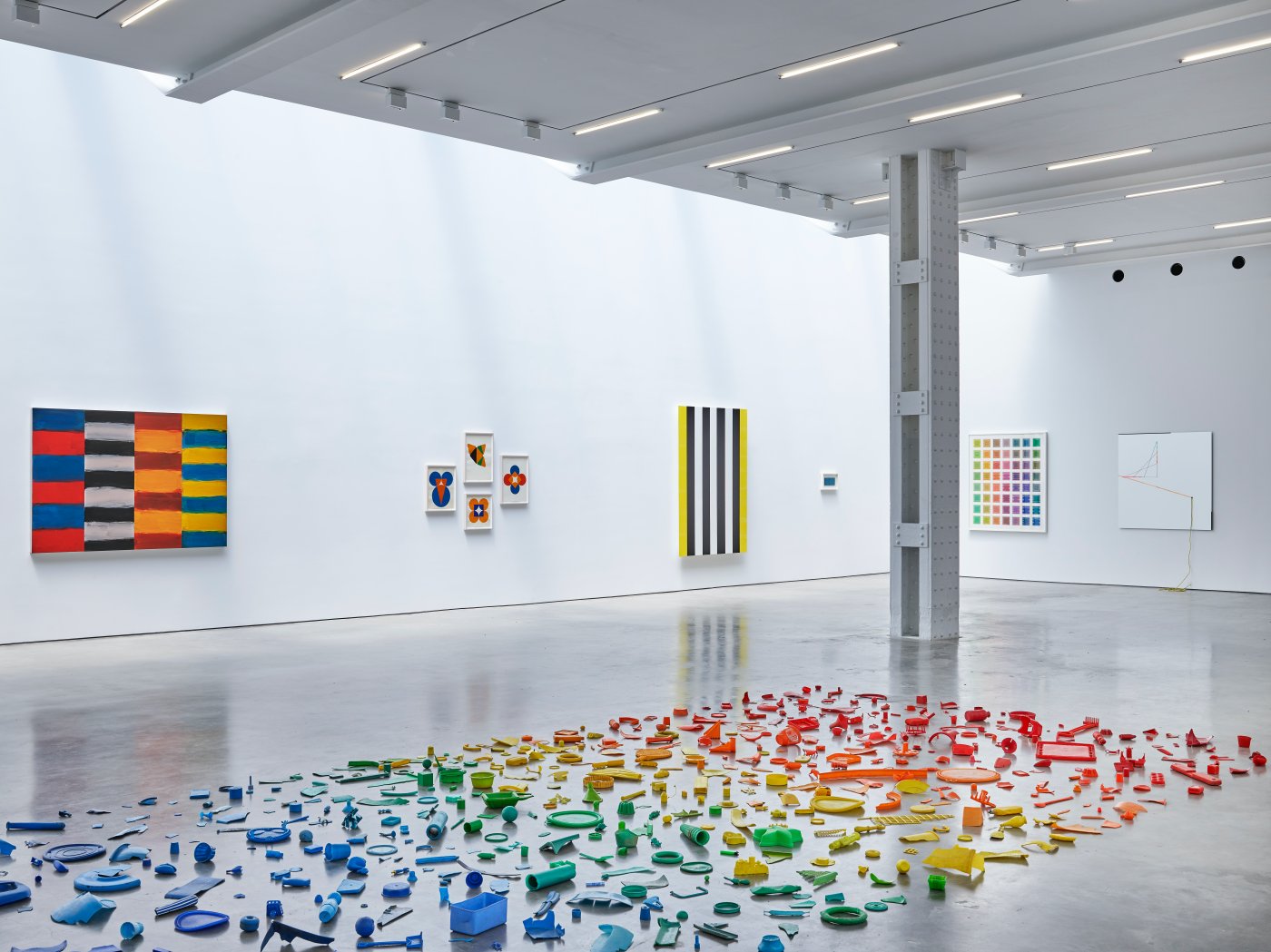 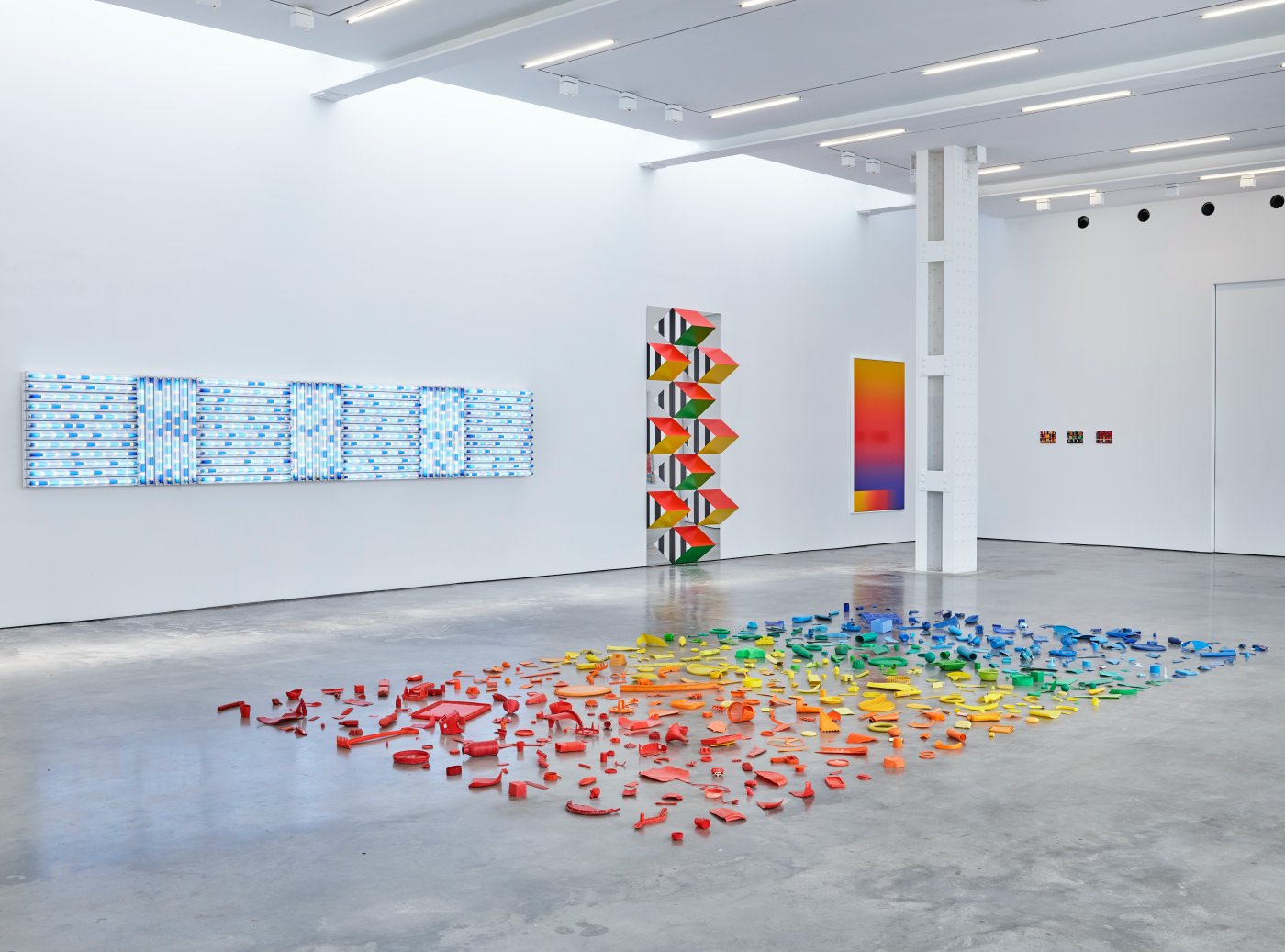 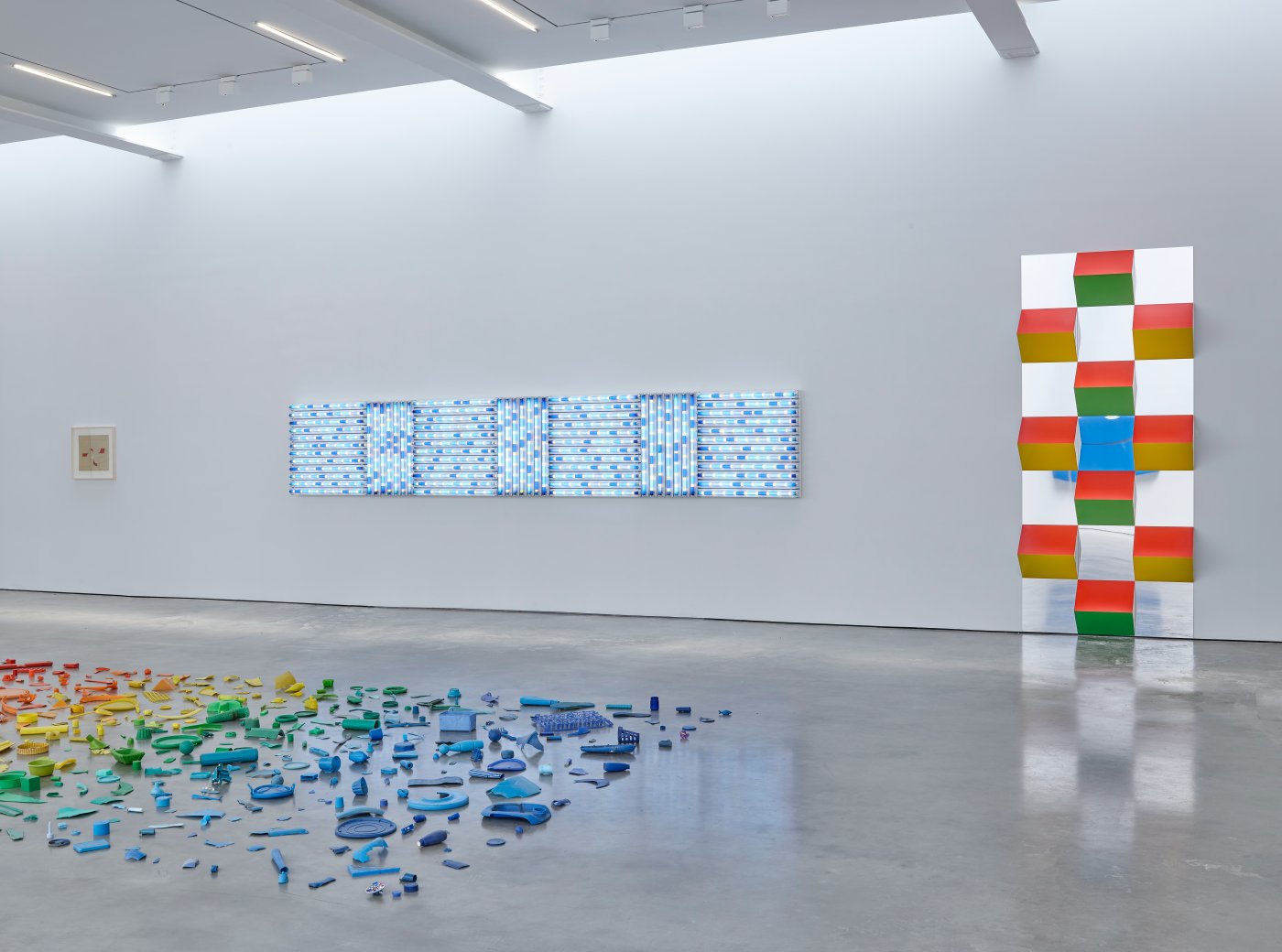 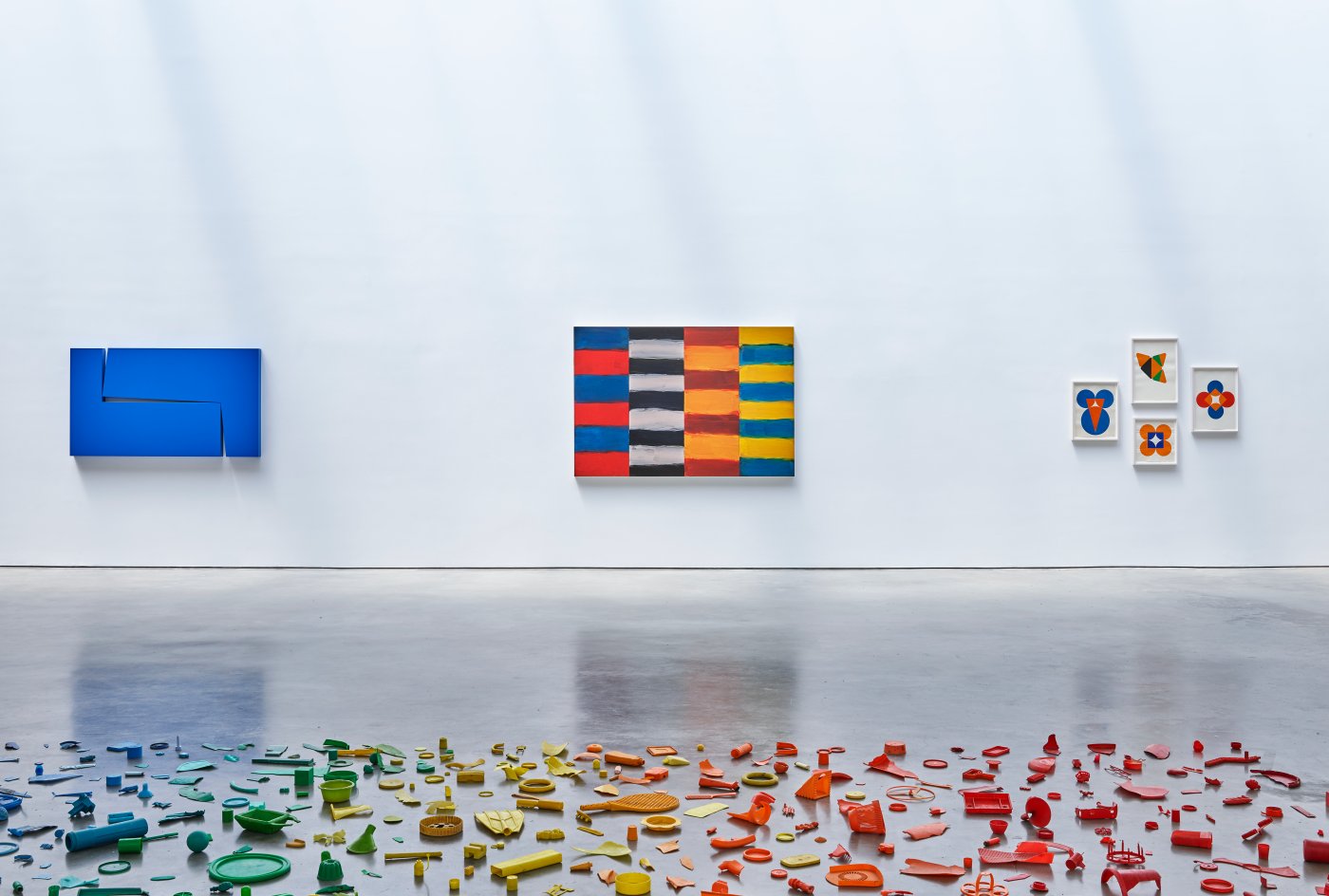 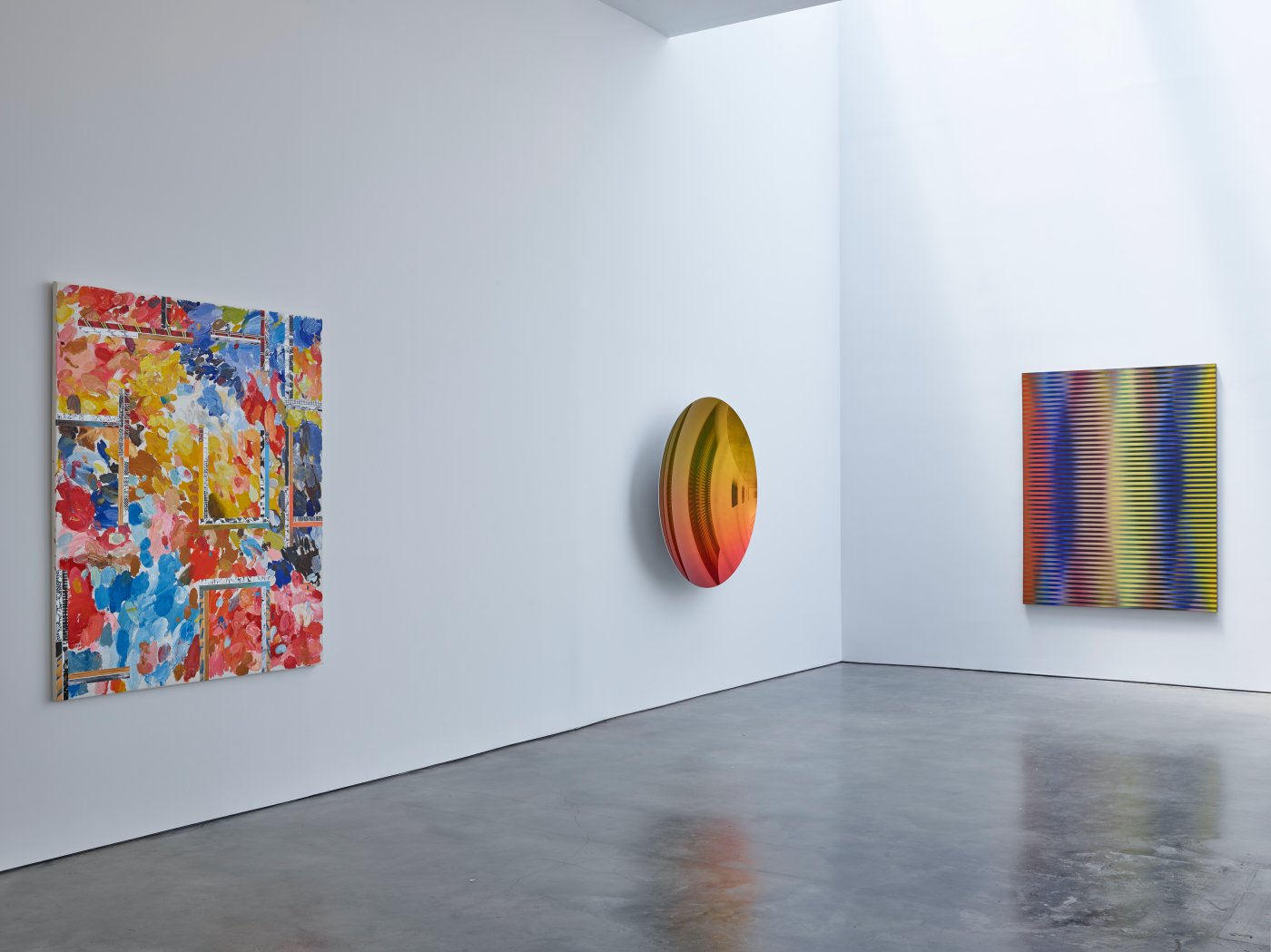 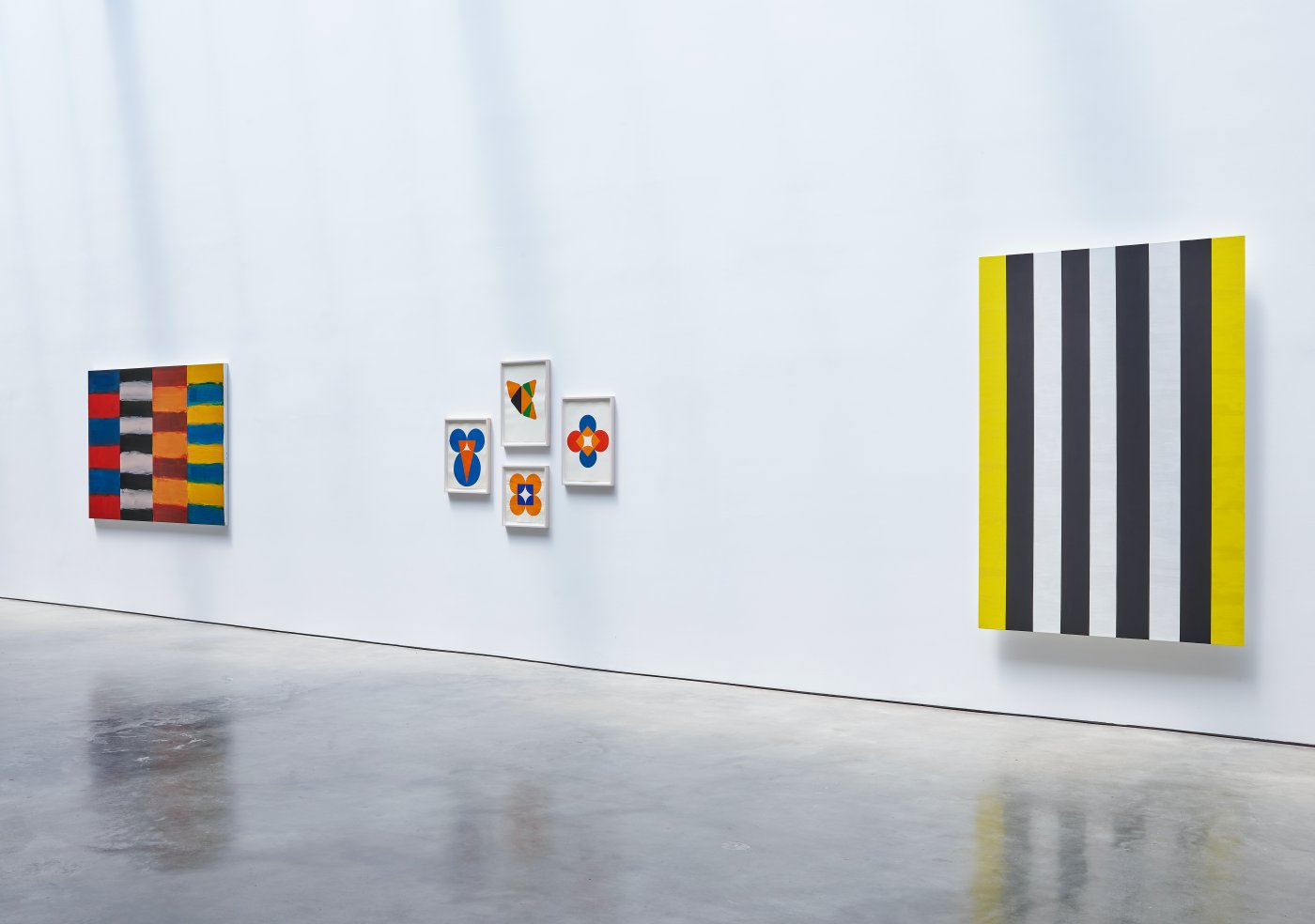 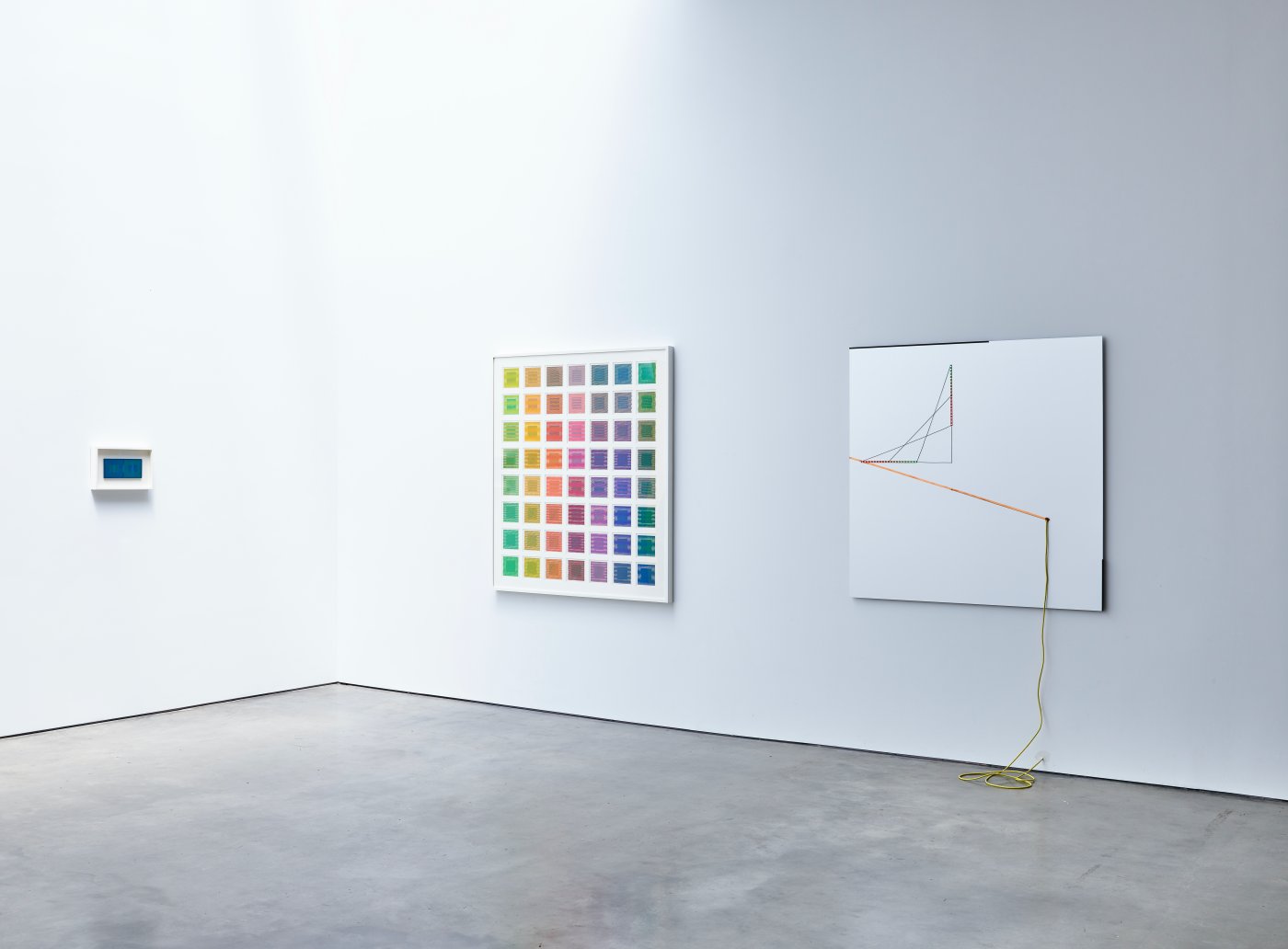 This group exhibition looks at re-setting and re-establishing our habits of looking at art, focusing on the way in which artists make sense of the world by breaking it down into its constituent parts – in this case color – in order to re-build anew.

The title of this show comes from a seminal, early floor-based work by British sculptor Tony Cragg, entitled Spectrum (1983). The creation of one cohesive form comprised of miscellaneous, accumulated parts, often found or recycled – in this case, discarded plastic found on the shores of the sea – has been a constant in Cragg’s practice for many decades. Spectrum, a carefully-arranged abstract composition, is a reflection on our disposable society: drawing together industrially-produced materials that are adversely easy to discard and yet almost impossible to destroy. The work simultaneously highlights the natural beauty of these objects, and our collective legacy as a species.

Alongside this, Sean Scully presents a new painting, Gatherer 3, a departure from the horizontality of his recent Landline series. The vertically-oriented bands of color create both movement and confrontation as the ends of the bands defy one another. Drawing on the historical lineage of modernist painters, Scully plays with our perception of color, light and depth, transforming our experience of the material world into a lyrical, pictorial allusion.

The ancient Greeks were the first to attempt a unified theory of color – Plato and Aristotle proposing seven un-mixed, base colors, “those which painters cannot manufacture,” among them crimson, violet, leek-green and deep blue. In Eos (Dawn, Troy, 10/27/02) (2007), Spencer Finch endeavored to recreate the morning light experienced almost three millennia ago at the time of Homer’s The Iliad, for a fluorescent light piece named after the Greek goddess of dawn. Through blue, violet, pink and green filters, this delicate, poetic snapshot of time reveals the enduring nature of light.

The notion of a universal, color-coded spectrum also stems from the Newtonian idea that all color derives from a set of primaries (as espoused in the 1704 book Opticks, Or a Treatise of the Reflections, Refractions, Inflexions and Colors of Light), the subdivisions of which created his now famous color wheel of secondary and tertiary hues. However, Isaac Newton’s scientific categorization of color was aided by the use of a prism (and ironically by his extended period of quarantine escaping the English plague) and so bears similarities with other mechanical means of subdividing light, whether that be a utopian fiction centered on a structure of pure gold – or in the automated functions of a computer program – as in Cory Arcangel’s devolved instructions to create his Photoshop gradients, or even in Roy Colmer’s blurred and striated color-field paintings, influenced by his early work with film and video cameras.

Even painters must translate their experiences and emotions using the component parts of a spectrum via their palettes. Stanley Whitney professes to allow the color its own space and life within his works, while the precision and cleanliness of Carmen Herrera’s intensely saturated color compositions belie her insistence on their equivalence: “To me, the values of colors are very similar – black and white are colors; the orange and green could be black and white.” Herrera’s Estructuras, including Untitled Estructura (Blue) (1966/2016) as presented here, also convey how the experience of color can extend beyond an artwork’s physical boundary; the artist has described how the composition of her wall-based sculptures is subtly formed through a mutual coalescence of the color of the work, and that of the wall it is based on.

Although Channa Horwitz developed her own proprietary system of color relationships, based on numerical and mathematical principles – which can also be interpreted as conceptual, choreographical or musical notations – the building blocks of color are always keys to understanding other sensations or spheres of influence. That conversion may also occur in the colored LED strips of Haroon Mirza’s Self Transforming Machine (2016-18), which itself is formed and powered by light itself, the vehicle of all color.