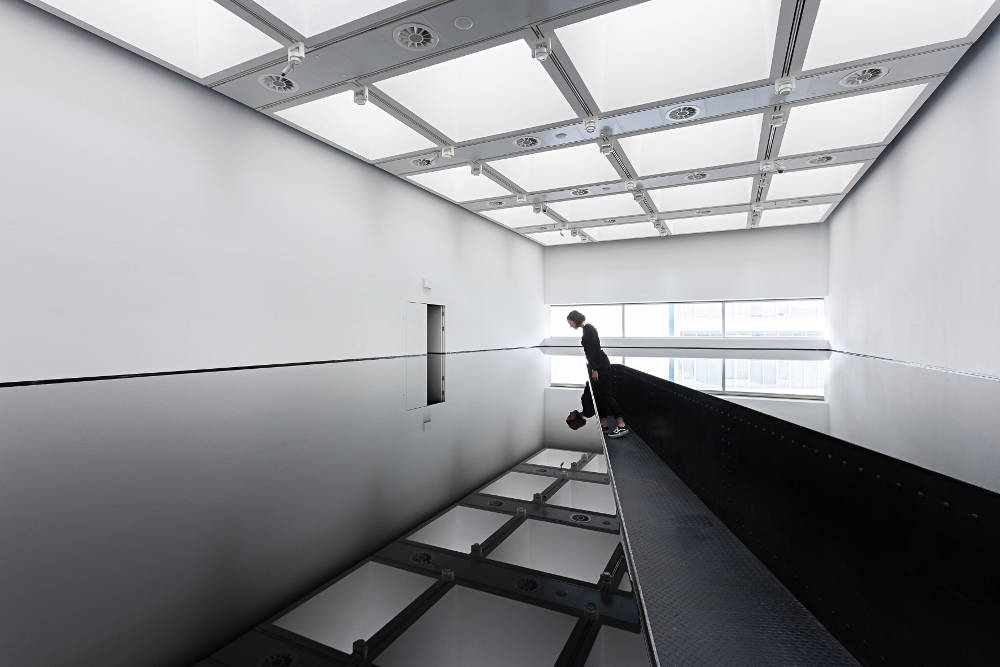 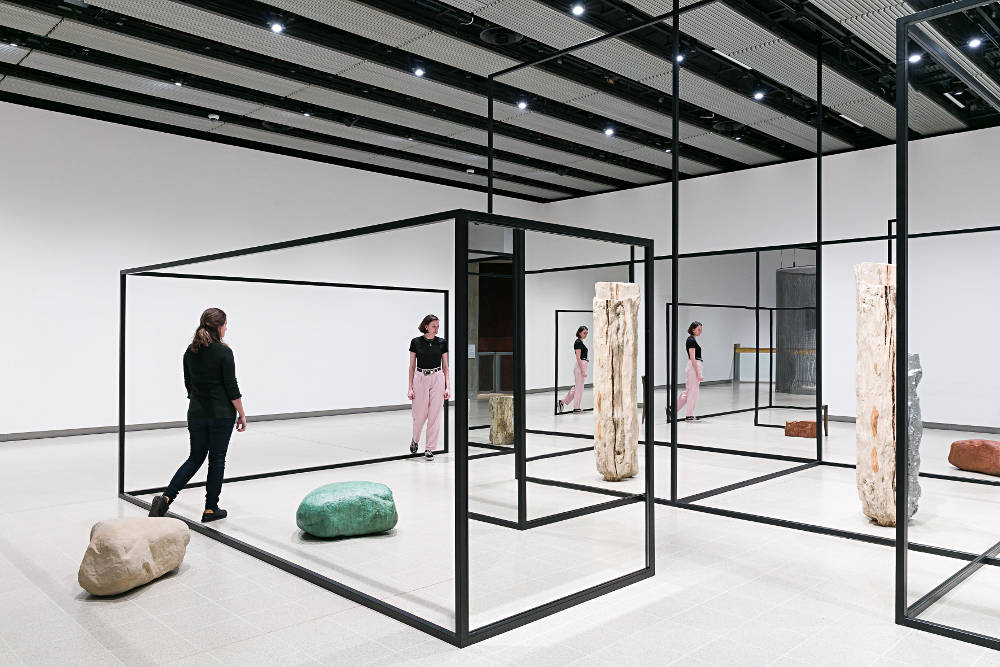 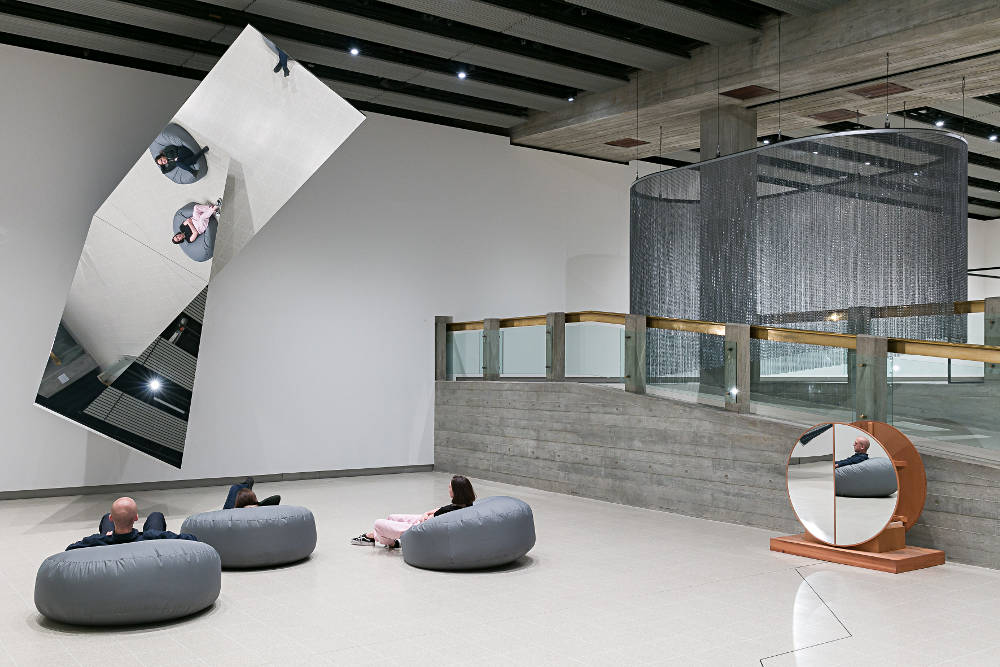 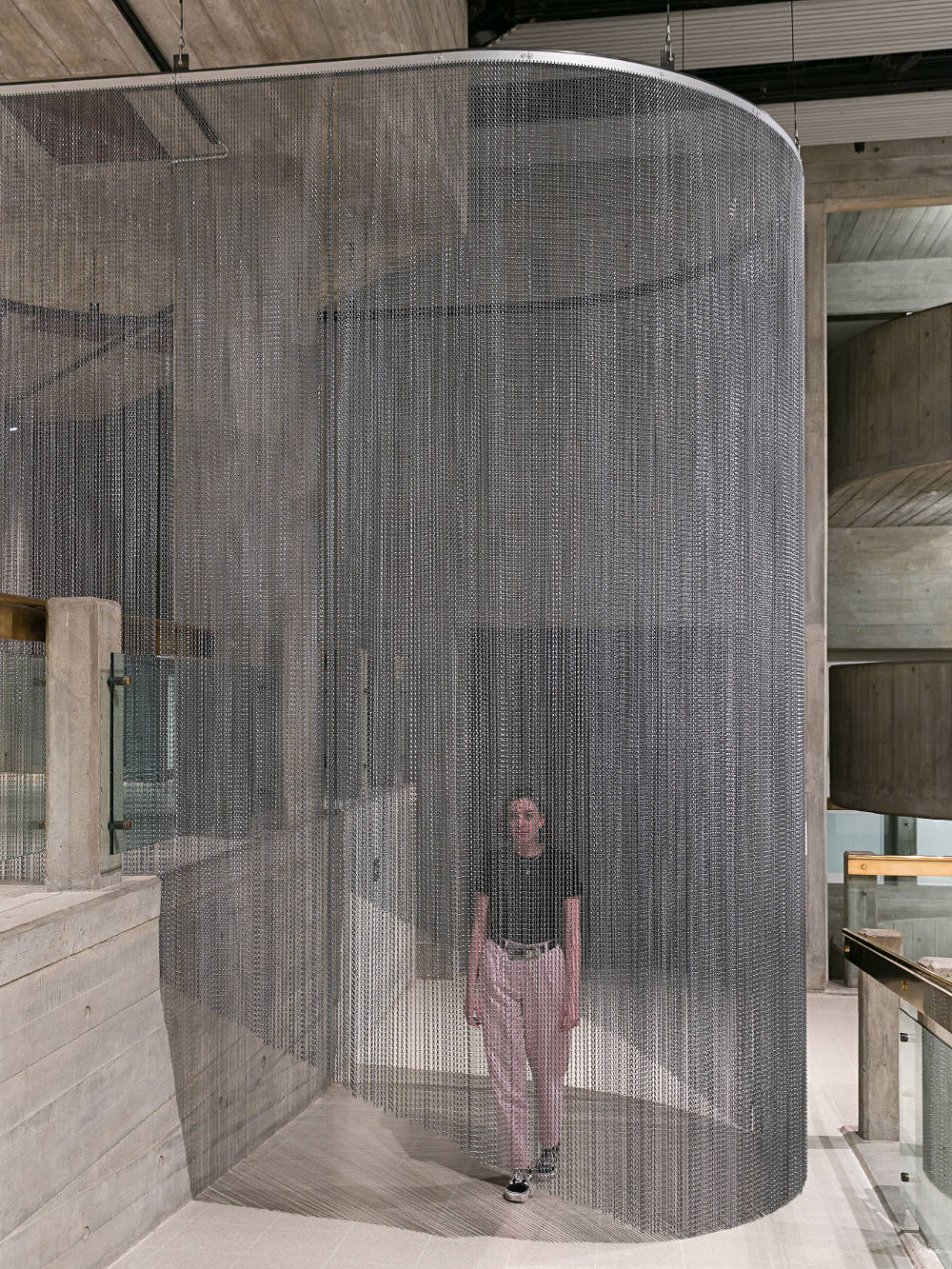 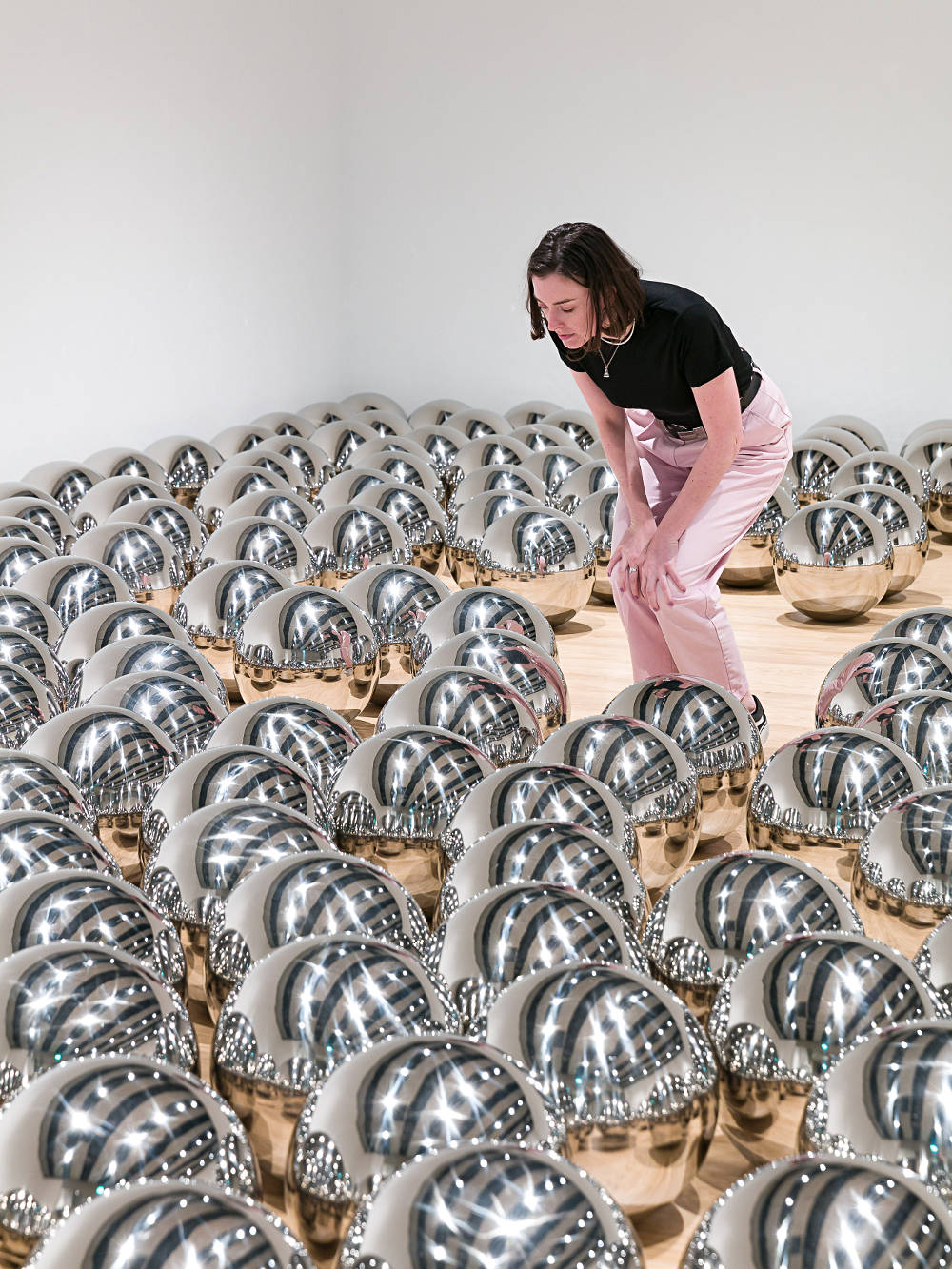 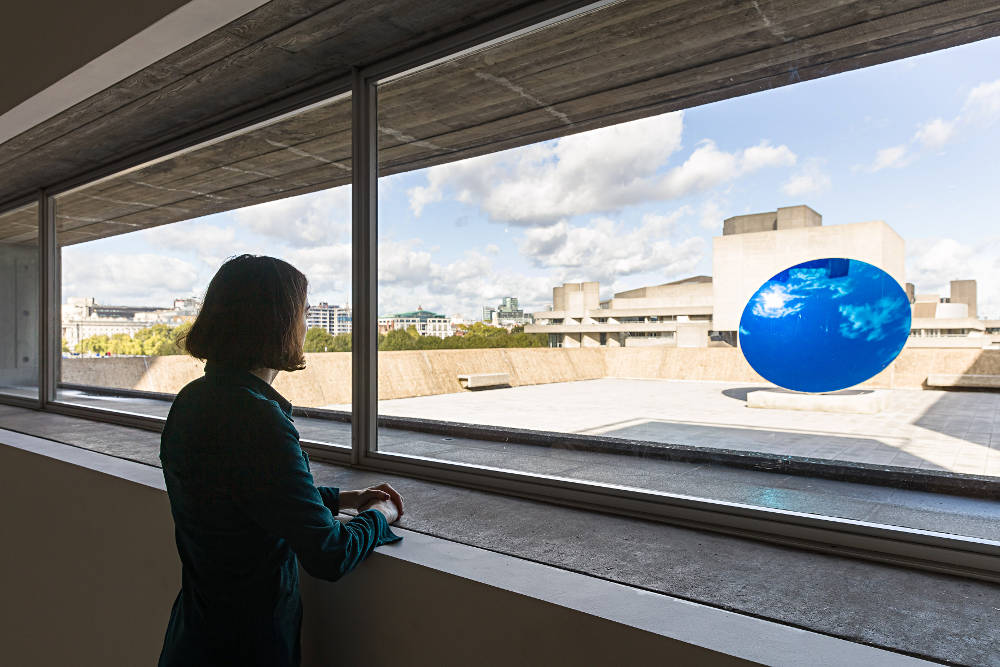 Hayward Gallery’s new major exhibition Space Shifters features artworks spanning a period of roughly 50 years by 20 leading international artists that alter or disrupt the visitor’s sense of space. The works in the exhibition focus the attention of the viewer on the act of perception whilst transforming their experience of the Gallery’s distinctive architecture. Often constructed from reflective or translucent materials like glass, resin and mirror, the artworks in the show aim to elicit responses that are both physiological and psychological. They also comprise an alternative history of minimalism: not a geometric, austere, serial minimalism, but one with a more alluring, elegant and playful sensibility.

In Space Shifters, several artists ponder the notion of reflection and that its definition holds a double meaning: the physical mirroring of an object and the contemplative act. The most dramatic example of this is Jeppe Hein’s 360° Illusion V, 2018, a huge rotating mirror sculpture that presides over the first gallery as viewers enter the exhibition. This work reflects the surrounding architecture as well as groups of viewers, drawing them in with simultaneous inversions. Directly across from this work is a space-bending piece by Anish Kapoor, Non-Object (Door) (2008) which warps and distorts the space around the viewer. While wandering through the galleries, visitors will encounter Josiah McElheny’s Interactions of the Abstract Body (2012) dispersed stationary sculptures which are activated by trained dancers who wear the mirrored wooden costumes interacting with visitors and artworks in a continuous performance.

As visitors walk up the concrete ramp to the second gallery, they are invited to interact with a new commission that plays off of the unique brutalist architecture of the Hayward Gallery building. Daniel Steegmann Mangrané is inspired by the shape of the poured concrete stairwells and he has created, especially for this exhibition, curtains that echo their curves. The title of this new work – an unpronounceable pairing of a subset and superset sign – is intended to suggest the three-way relationship between the artwork, the space that it encloses and the exhibition that contains it. Alicja Kwade’s WeltenLinie (2017) is shown for the first time since its premiere at the last Venice Biennale. This playfully disorienting installation encourages the viewers to walk around and through its structure of frames discovering objects that seem to change appearance – a greyish rock turns to rusted metal, while a wooden tree trunk becomes a gleaming silver, smaller impression of itself.

Some of the earliest works in this group show are often associated with the ‘Light and Space’ movement which originated in the mid-1960s in the Los Angeles area. At this time, a number of the American artists in the exhibition were experimenting with unconventional materials and innovative fabrication processes. One of the few female artists associated with Light and Space, Helen Pashgian contributes a significant installation and UK premiere of a series of large acrylic columns which use varying degrees of transparency and light to offer a range of shifting optical effects. Using a unique spinning casting process, Fred Eversley creates sensuous coloured lenses through which viewers can witness the world anew. Larry Bell is represented in the exhibition by his first large-scale installation Standing Walls (1969/2016) which viewers can enter to experience its many reflections and effects whilst seeing themselves within the sculpture.

In the adjacent room is Yayoi Kusama’s renowned Narcissus Garden (1966–2018), a landscape of hundreds of stainless steel mirrored spheres that take over the gallery below as visitors ascend the stairs to the upper galleries. Another artwork installed in the rear stairwell is Monika Sosnowska’s curious red steel and PVC handrail that intertwines and follows the Hayward’s own handrail before twisting and looping across the walls of one of the upper galleries.

Many of the works in the exhibition allow viewers to both see into as well as through the material of a solid sculpture. De Wain Valentine pioneered the use of resin to create large-scale translucent sculptures including his 1.5-tonne Gray Column (1975–76), which is being shown for the first time in the UK. Robert Irwin’s work Untitled (Acrylic Column), (1969–2011) is a monumental and majestic clear acrylic column that rises over 4.5 metres in the Hayward’s upper gallery, yet is almost imperceptible, save for its refractive properties.

Contemporary artists Ann Veronica Janssens and Roni Horn demonstrate the diversity of perceptual effects using glass to explore colour in radically different ways. Janssens bonds reflective film between sheets of smashed glass that give her Magic Mirrors a dynamic, iridescent shine, while Horn’s large cast-glass lozenge Untitled (“Everything was sleeping as if the universe were a mistake.”) (2012–13) seems to contain an uncanny depth and liquidity. Another new commission is Leonor Antunes’ delicate piece that cascades downward from one of the new Hayward Gallery ceiling coffers, conjuring a light-filled volume of brass shapes.

Engaging the external environment, Sky Mirror, Blue (2016) by Anish Kapoor dramatically shifts a portion of the sky and the building’s roof onto one of the Hayward Gallery’s distinctive sculpture courts. Occupying an entire gallery upstairs, Richard Wilson recreates his monumental installation 20:50 (1987). Thousands of litres of recycled oil form a waist-high horizon that surrounds the viewer as they proceed down a gangway spliced through the inky liquid. The artwork’s glossy surface mesmerisingly reflects the Hayward Gallery’s new pyramid roof lights and the open sky beyond.

Ralph Rugoff, Director, Hayward Gallery said: “Space Shifters provides an exciting conclusion to the Gallery’s 50th anniversary year. Spanning the past five decades – a period that parallels the Hayward’s own history – many of the installations and new commissions in the exhibition respond directly to Hayward Gallery’s distinctive volumetric galleries, drawing out aspects of the building’s sculptural character and showing it to us in ways we would never have imagined.”

Dr Cliff Lauson, Senior Curator, Hayward Gallery said: “Space Shifters brings together a leading group of international artists who explore how we perceive objects, their surrounding spaces, and each other. These sculptures and installations together form a series of interlinked optical experiences across the Hayward Gallery that are as technically and aesthetically impressive as they are playful and pleasurable.”

With spatial perception at its centre, Space Shifters is a fitting conclusion to the Hayward Gallery’s 50th anniversary, highlighting and making the most of some of the renovated building’s salient architectural features.

The exhibition is accompanied by a fully-illustrated catalogue with texts by Dawna Schuld, Lynn Zelevansky, and Cliff Lauson.

Thursday 18 October, Dr Jo Applin, Reader in the History of Art, The Courtauld Institute of Art