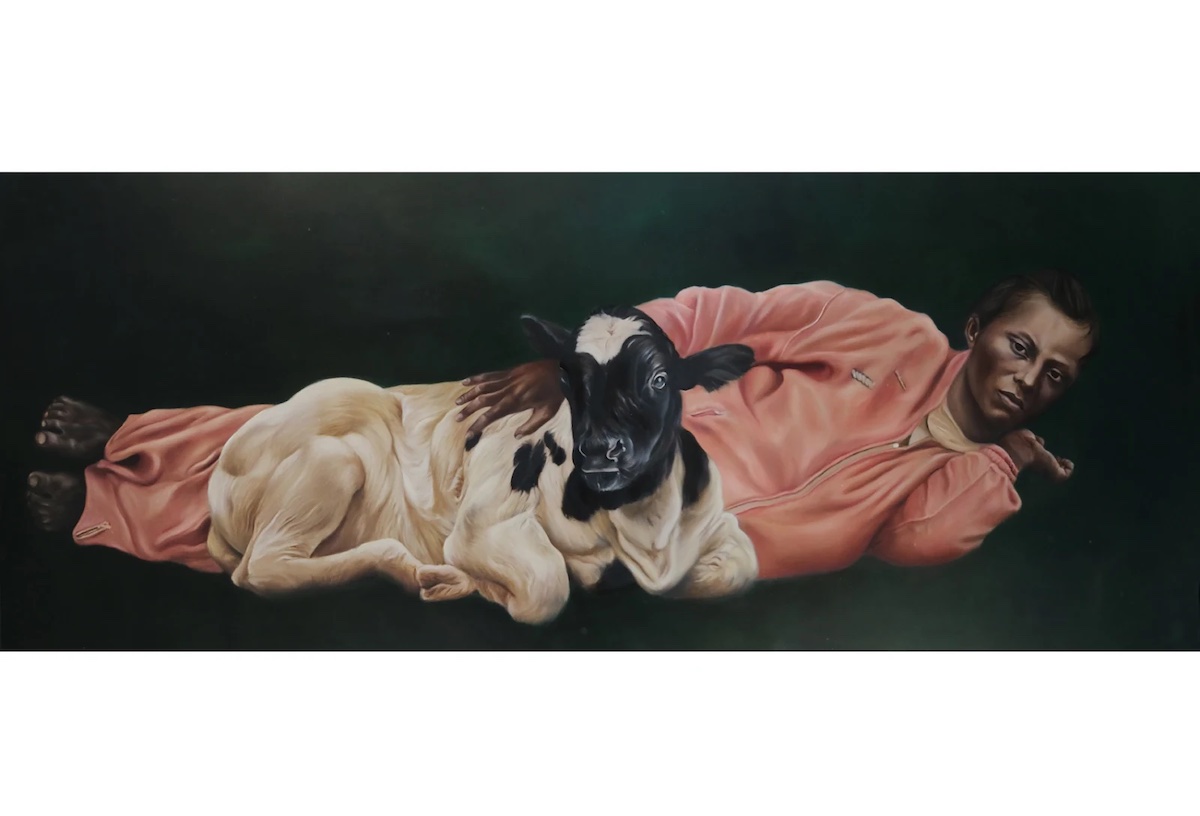 Sophie Kuijken’s work, which remained undiscovered for almost 20 years, was brought out of the shadows for the first time in 2011 at the Museum Dhondt-Dhaenens in Deurle (Ghent- BE). As a whole, it constitutes a highly singular contribution to the art of portraiture. If the artist had not met Joost Declercq (the former director of the Museum Dhondt-Dhaenens), we would probably never have seen her works with their captivatingly strange figures that appear surprisingly familiar. This retreat to the inner world of her studio, painting out of sight, has enabled her to create a powerful body of work that not only confuses but also touches the viewer, right down to the core.

The exhibition presents the artist’s latest paintings, which manifest her irrevocable taste for the art of portraiture. At first glance, the viewer recognises classical figures painted in the manner of the great Flemish Primitives. Sophie Kuijken builds up her bodies and backgrounds through successive thin layers of acrylic paint, oil and glaze, which she superimposes until she achieves a smooth and deep surface. The history of art seems to permeate the paintings in the exhibition through some of the details and attributes in them. The many brushstrokes, both precise and light, are delicately applied to the wooden panel and create deliberate morphological deformations. In some paintings, the silhouettes are stretched out and the raw flesh tones evoke the mannerisms of the Renaissance. The neutral background of her portraits, their tight framing and the powerful chiaroscuro that shapes her figures also recall the art of Caravaggio.

Although Sophie Kuijken’s works are technically flawless and finely crafted, her paintings are permeated by an elusive quality. The artist’s classical influences collide with her highly contemporary artistic approach. Indeed, the artist composes her portraits from a combination of several photographs that she collects from the internet. Each character finds its singularity in the accumulation of plural identities carefully selected by the painter. Sophie Kuijken’s new subjects, lost until now in the relentless flow of digital data, assume their rightful place within the painting, set in a time that seems close to eternity. Their gazes, fixed and impenetrable, come to life under the artist’s stroke: a hidden vulnerability, a lively emotion, emerge under their formal attire. In this way, these artificially reconstructed figures constitute an original counterpoint to the history of portraiture, which is intrinsically linked to the live model. This multiplication of sources, this unique dispersion of the subject, creates a diffuse mystery: that of a half-familiar, half-chimeric figure, flirting with the bizarre, the unknown. The portraits take on the form of veritable allegories of the mystery of existence and stand before their fellow human beings who look at them – or at themselves, as in a mirror.

The complexity of these characters also emanates from the weight of their presence on the painted surface: the skin of each subject – that boundary between the self and the world – is carefully crafted, contrasting with the darkness of the backgrounds and the opacity of the subtly shaded tones. Although the artist strives to work in some form of continuity, certain paintings in the exhibition bear witness to her latest artistic experiments. The chromatic palette used for the background of certain works has undergone significant changes: the opaque monochrome usually used for the background is replaced by visible, subtle and light brushstrokes, creating luminous open areas. The work S.L.B. reflects this shift with its light toned background, approaching the evanescence of a quiet sky. The background of the work K.A.G., in turn, features piercing streaks of light that embrace its subjects in a gentle manner. These new features could reflect the impressionist influences of the artist who, using a delightful sense of displacement in her compositions, brings together different temporalities in her paintings.

Incongruous associations arise from the liberty she takes to divert the historical conventions of portraiture. A number of details attributed to her subjects, revealing their social status, exacerbate their ambiguity: the plainness of the suit and tie of the subject in B.Z.J. is juxtaposed with the extravagance of his fur coat; the appearance of an animal such as the cow in L.K.F. enters into a dialogue with the reclining position of a character of indeterminate gender. Echoes and plays of similarities occur between the subjects of the exhibition. The posture of the man in K.I.O., crouching with his knees on the ground, can be compared to the position of the cow in B.Z.J. In this way, in the intertwining of genres and sometimes contrary things, the certainties of representation become blurred in Sophie Kuijken’s paintings.

Through her great technical mastery, the artist plays with ambiguity by superimposing several layers of different temporalities, ranging from the great and unchanging history of art to the shared and random resources of digital technology. As such, it is at the very threshold of two worlds, in the form of an art whose strength lies in contradicting itself while at the same time retaining mysterious affinities, that Sophie Kuijken’s portraits manage to be as disconcerting as they are comforting. The subjects, suspended in the detailless universe of the painting, are deprived of any temporal or spatial anchorage, as if to better emphasize their uncanny character. And yet, these anonymous, fabricated beings appear to be very present. As well as being actors in their own lives through their firm placement at the centre of the painting, Sophie Kuijken’s subjects also seem to capture our humanity in their deep, piercing gazes.

In 2024, a solo exhibition of Sophie Kuijken’s work will be held at the Ixelles Museum in Brussels. One of the artist’s paintings was previously exhibited alongside a selection of portraits from the museum’s collection as part of the Portrait Bourgeois exhibition held in 2016.