Pace Gallery presents Silence, an exhibition that brings together five artists who use abstraction as a means of engaging with meditative, spiritual and philosophical understandings of nature. The exhibition features work by Andreas Eriksson, Brice Guilbert, Lee Ufan, Marina Perez Simão, and Jean-Paul Riopelle. 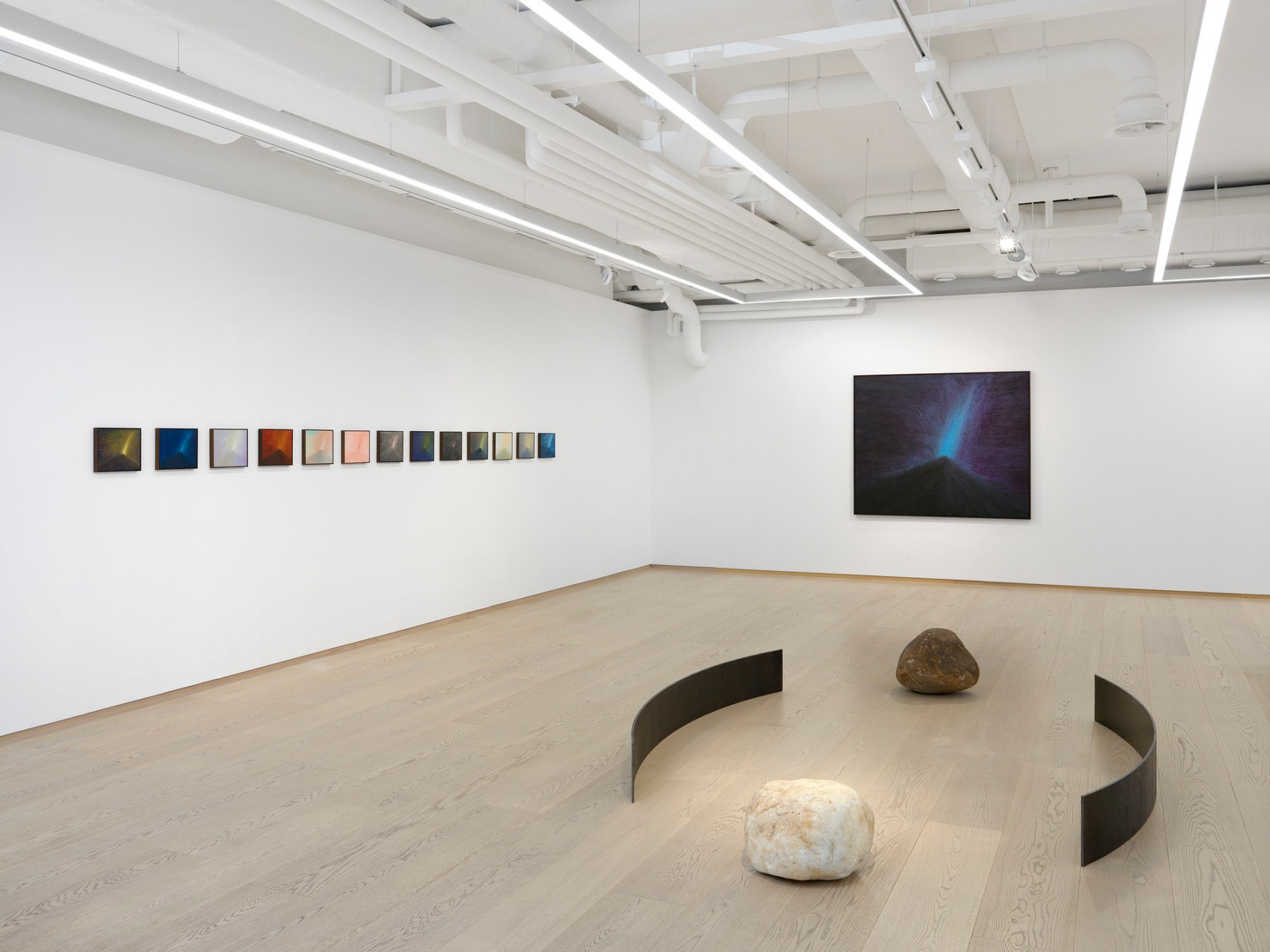 Despite their distinctive practices, these artists are united by a shared fascination with an artwork’s capacity to give form to their highly individual experience of the world. At its core, Silence is an exploration of the ways in which these artists use varying degrees of abstraction to negotiate the relationship between body, landscape and temporality. The fact that there is no figure present within their work and yet a vivid sense of presence abounds, is testament to the artists’ masterful handling of their chosen material.

Central to Lee Ufan’s practice is the relationship between space and time. This complex idea, which is firmly rooted in Eastern philosophy, is explored through juxtapositions of positive and negative space and natural material with manmade construction. In From Line (1983) Lee suspends blue pigment in glue, painting long strokes vertically to allow the opacity to fade, giving form to the passing of time. In Relatum – expansion piece (2008) Lee brings these ideas into three dimensions as the rough-hewn stones are placed in a dialogue with one another, encased by smooth steel plates, drawing attention both to the materiality of the sculpture as well as the negative space surrounding it.

Andreas Eriksson’s combination of thickly layered oil paint and washes of egg tempura speak to the many textures and colors found in his home on the edge of Lake Vänern in Sweden. Eschewing representation, Eriksson’s topographical paintings such as Körna (2020) dissect the world around him into jewel tones, arriving at an alternative—and perhaps ‘truer’—representation of his experience of the landscape.

Similarly, Marina Perez Simão’s paintings, inspired by the lush, powerful environments of her upbringing, are abstracted by mystical, swirling forms and dreamlike colours. Simão’s Untitled (2021) paintings combine earthy ochre hues with piercing rich purples and vibrant reds, producing a pulsating quality that belies their medium. For both artists, nature is presented as an all-powerful, domineering force. Indeed, Simão notes the dense fog that shrouds the hills in Minas Gerais and the crackling storms of Rio di Janeiro as important influences in her work.

Jean-Paul Riopelle’s gestural paintings use impasto, layering several applications of paint either with a palette knife or thrown in sinuous webs to create complex all-over compositions. In Nouvelles impressions n°15 (1978), dark blue and vivid red oil paint is applied so intensely it becomes quasi-sculptural; the white paint streaked through darker pigment like a crashing wave.

Likewise, Brice Guilbert’s canvases are heavily built up applications of paint which he makes himself. Guilbert’s paintings—all titled Fournez, the local pronunciation of the Piton de la Fournaise volcano on La Réunion—use impasto to create the illusion of an erupting volcano. Teetering on the edge of abstraction, Guilbert’s paintings are all created from memory as he attempts to capture his unique experience of the volcanic landscape of his home.

In bringing these works together, Silence provokes unexpected resonances between these seemingly disparate artists. For each artist the gesture itself is paramount; their brushstrokes, markings and viscous use of material leave a record of their actions, capturing not just their visual memory but also their individual process of making.