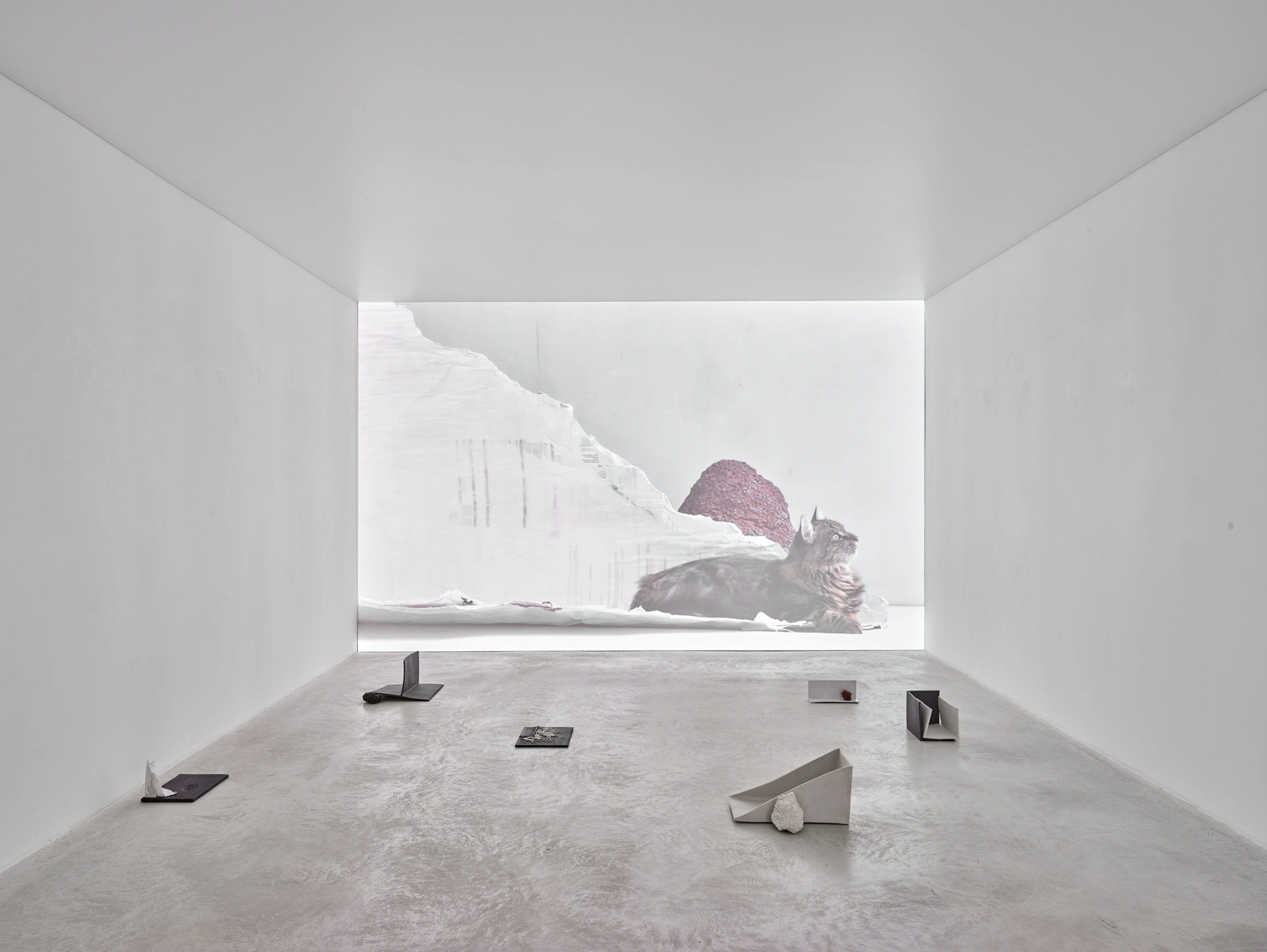 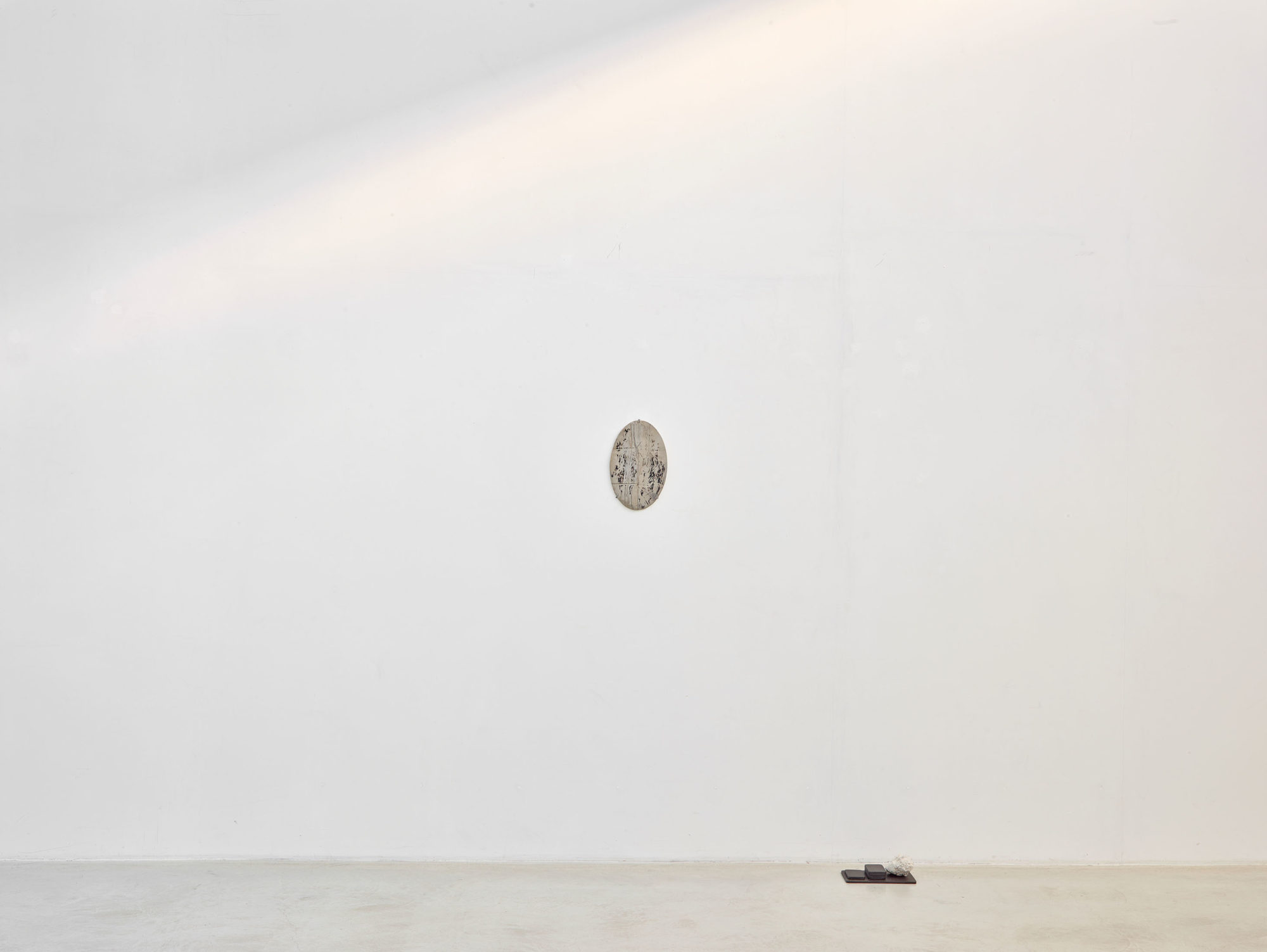 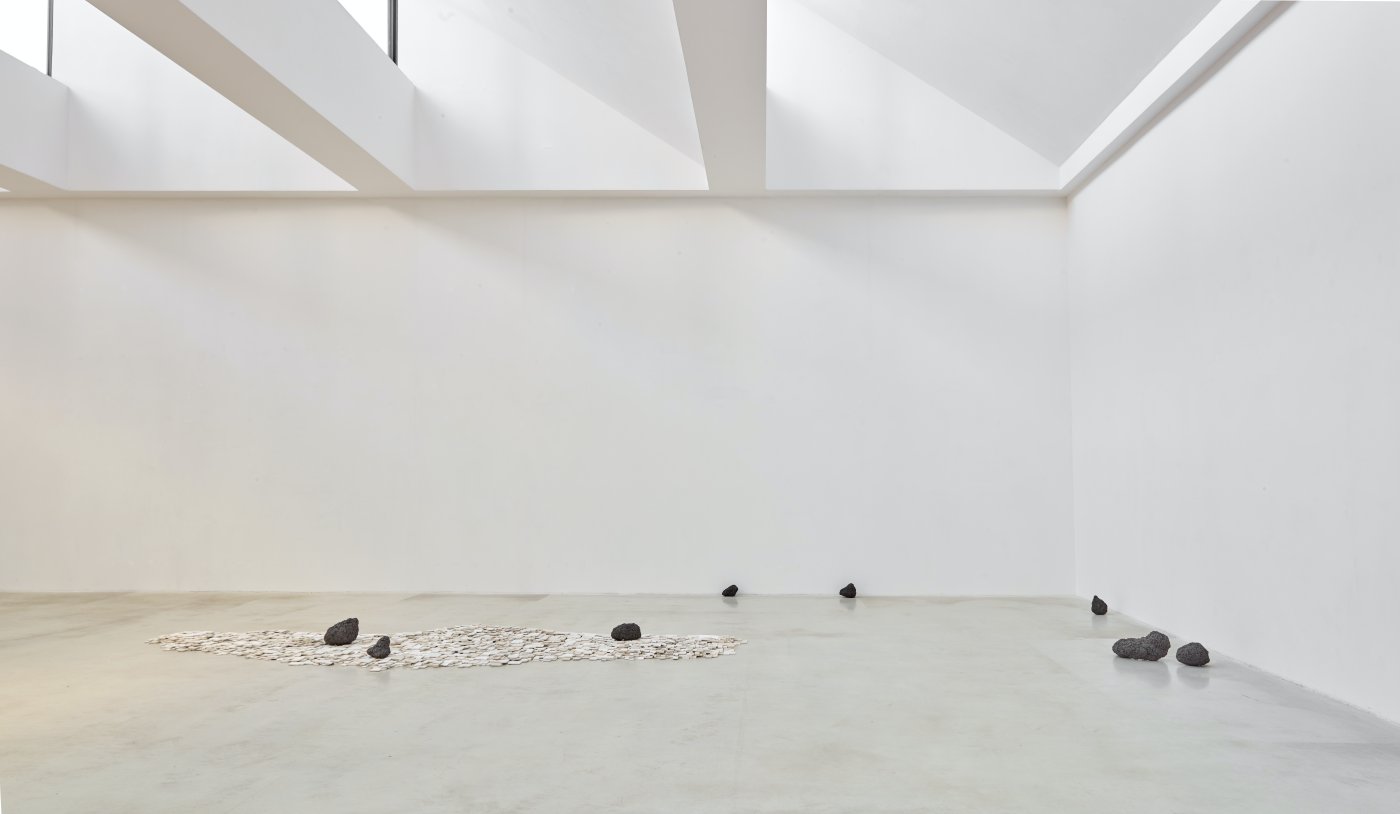 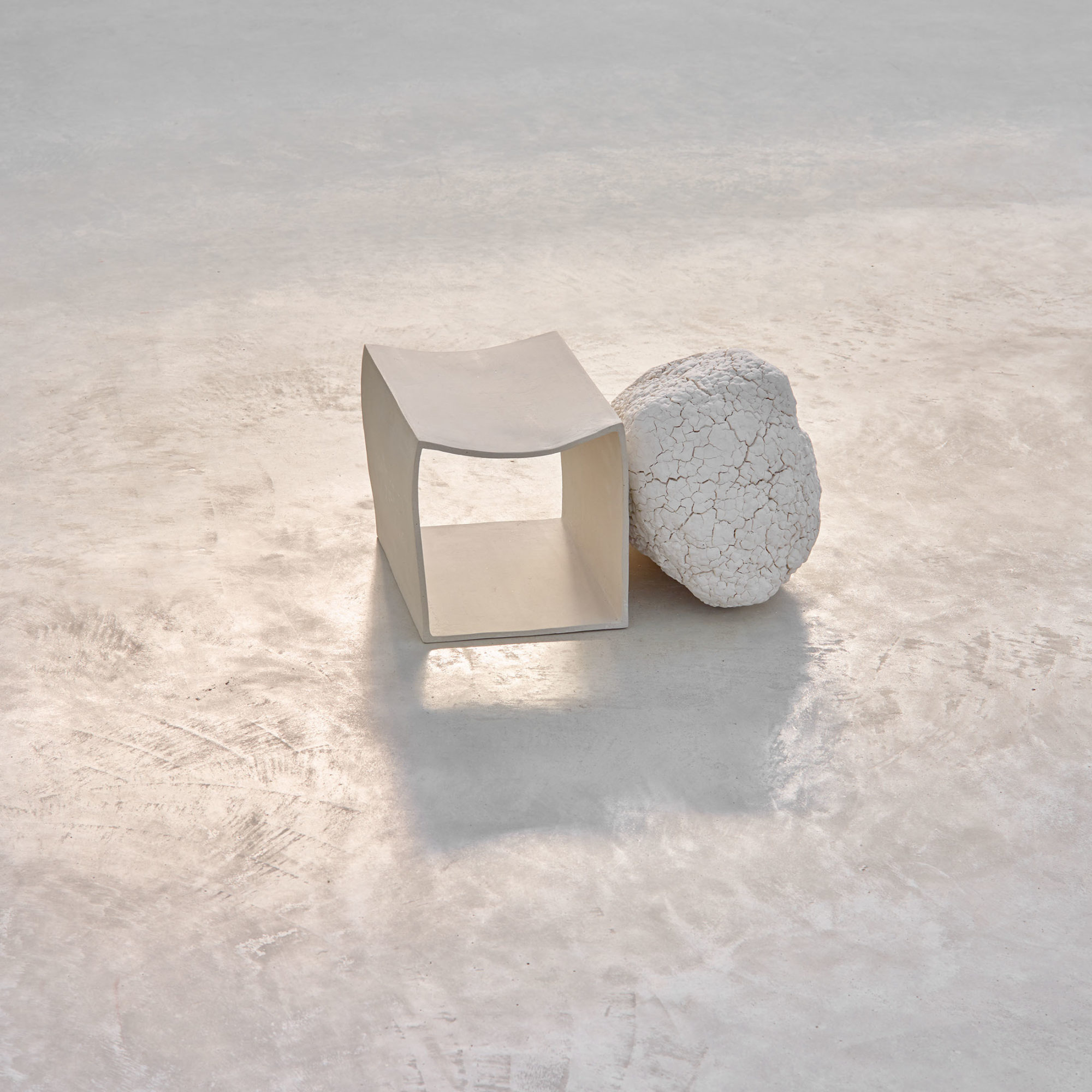 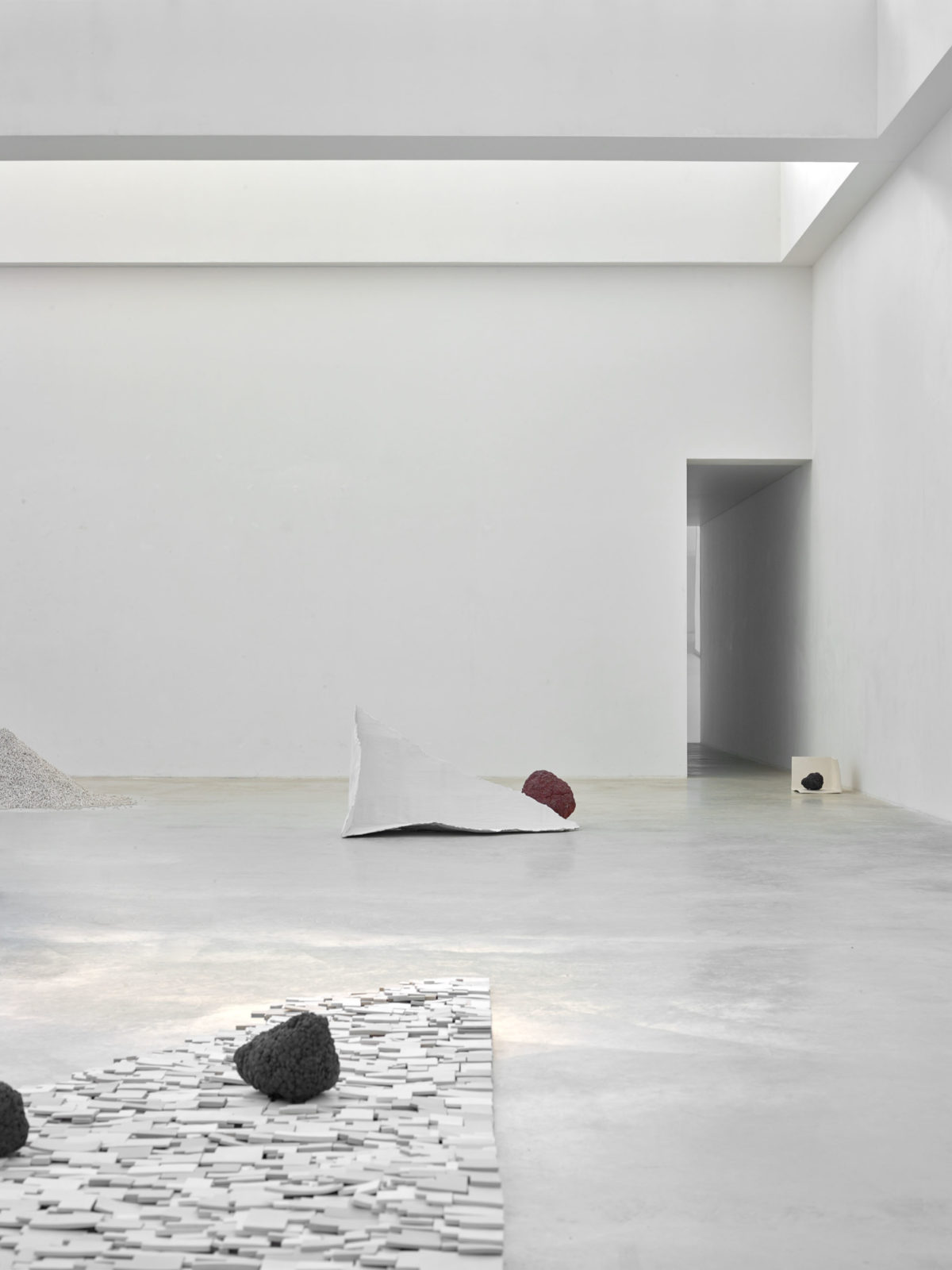 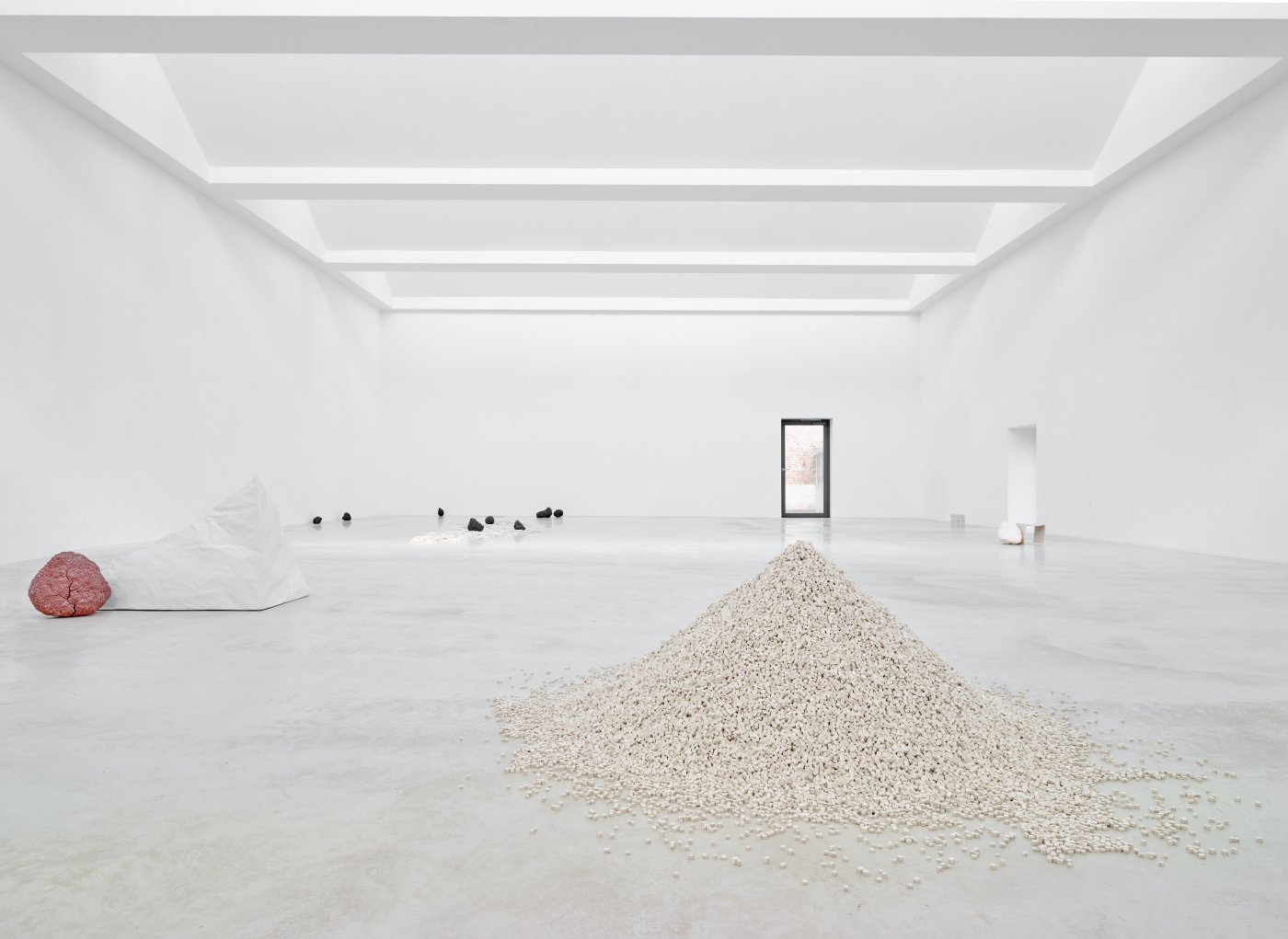 The notion of cohabitation has always been a central preoccupation in Lucia Bru’s work. She maintains this dynamic, as she experiments with ever-changing associations of form, to decide on their presentation. Individuals, pairs, trios, groups, heaps, and masses are the many ways in which a universe can be composed, presences noted, and existences affirmed.

There’s no paradox in the use of so-called ‘inert’ materials and the movement that the artist inspires in them; she knows her sculptures are animated by a sense that awakens in us an anterior intuition—a ‘life of stones’—a living sensation that distinguishes itself from anthropomorphism.

For Bru, the act of occupying space establishes interferences, which her sculptures maintain with the place, as well as the visible—or invisible—presence of exteriority. She does it in such a way that they are re-situated, compliant with a logic of belonging that renders visible an oscillation between the work’s affirmed autonomy and the relationship with the context of its appearance. Each new exhibition opens up new levels of co-existence, as ensembles unfurl and invite us into new trajectories.

Here, a mound of porcelain—heaps of little, asymmetrical cubes—echoes a surrounding landscape and captures its light. Further on, a video projection illuminates the sculptures, which are placed directly on the floor. The forms appear enlarged on the screen that fills the expanse of a wall. This sudden shift in scale introduces a new space, another dimension, a fiction of proportions that a living being elected to inhabit. It evokes the eruption of an animal presence, which acts like the metaphor of a spectacle, of a world in which boundaries of hierarchy, gender, and species have ceased to exist. Has that multitude of flat parts, with black masses dotted here and there upon them, come to expand the work’s territory, landscapes or architecture? We need to arrive at a certain height to perceive possible images and divine possible similarities…

However, beyond all speculation, Bru’s sculptures are sufficient in and of themselves. Whether they’re seen as real or enigmatic forms, imposing or minuscule, they have their intensity. At once fragile and wild, obvious or incongruous at times, above all, they hold their own, occupy their place, and activate a necessary flux between the works’ dynamics and the breathing of bodies.

Just as a piece of porcelain, a mirror or a cat can draw us into worlds of sensitivity, where singular individuals co-exist, so too this exhibition draws us into that particular moment when, as we take in what surrounds us, we discover ourselves to be participants in a common world, shared amongst us all.

Written by Joël Benzakin, translated from French by Kate Mayne