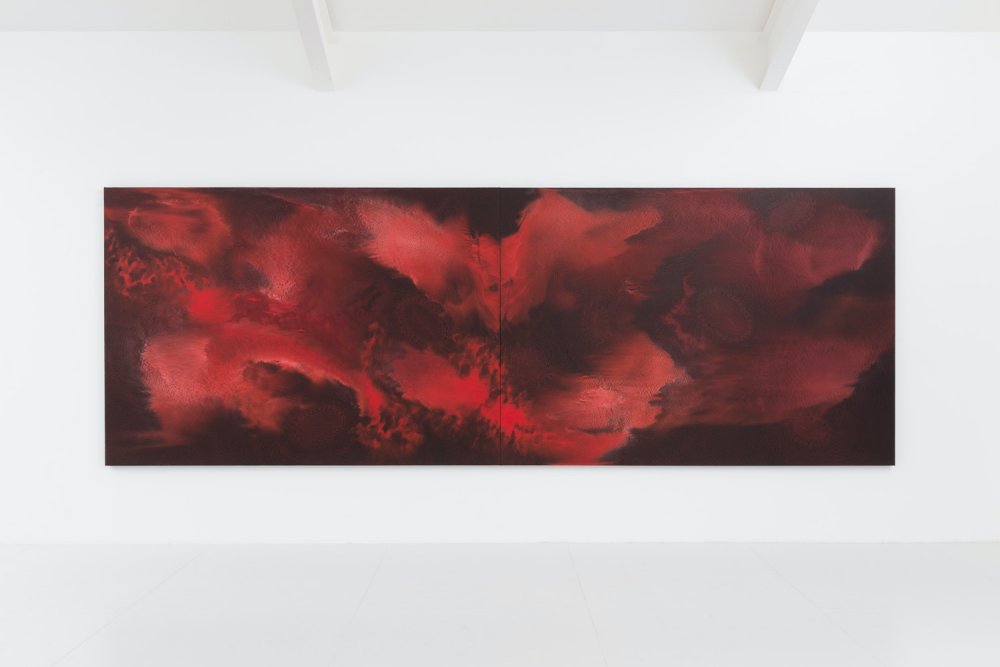 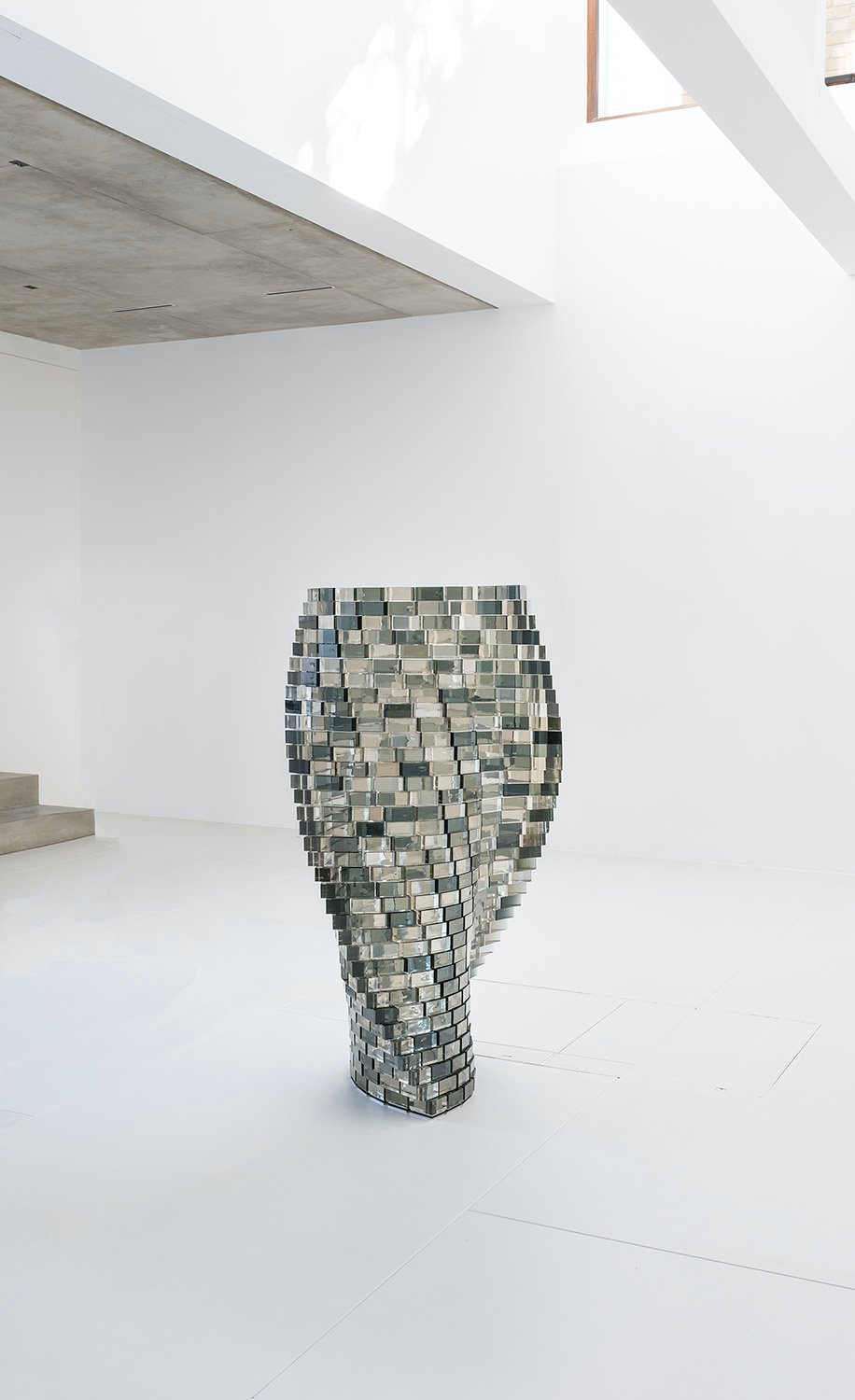 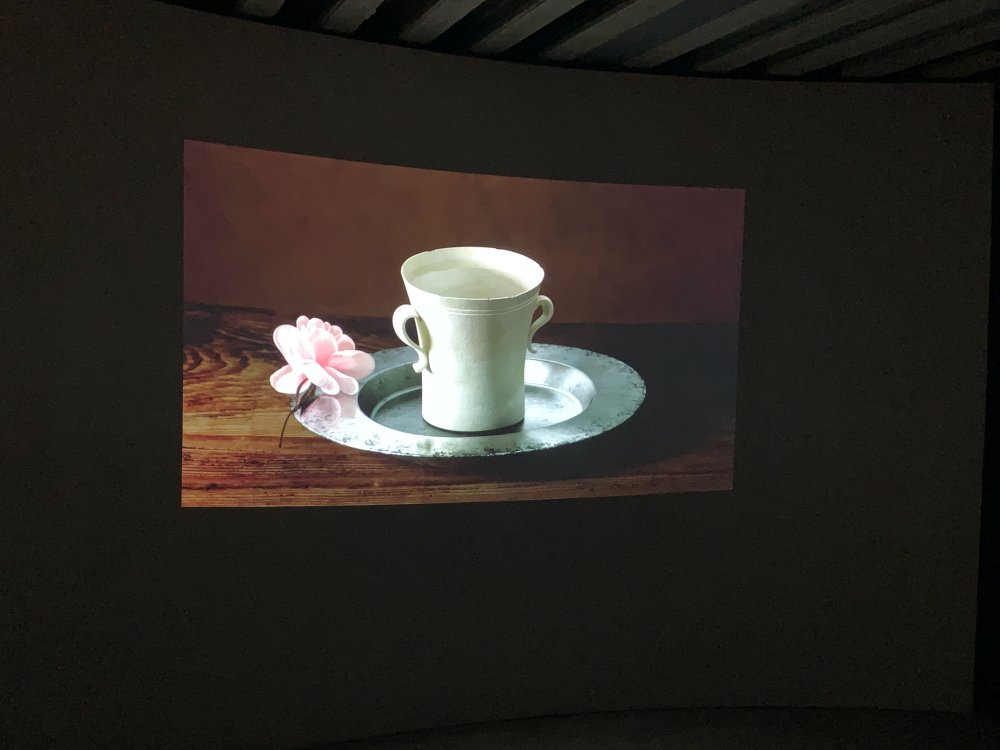 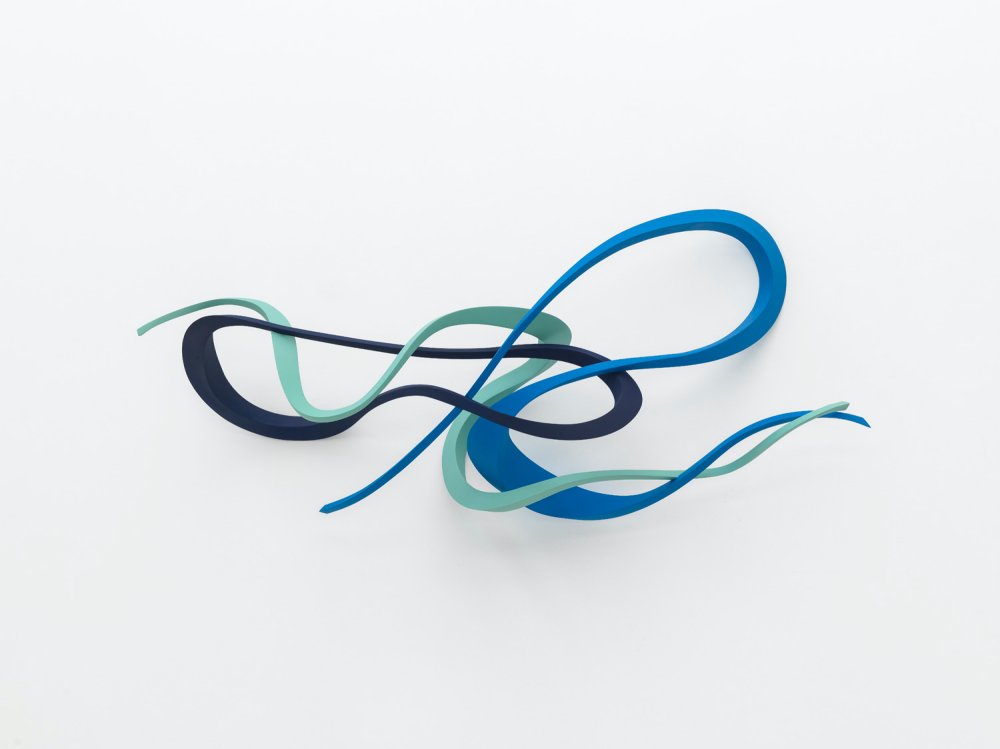 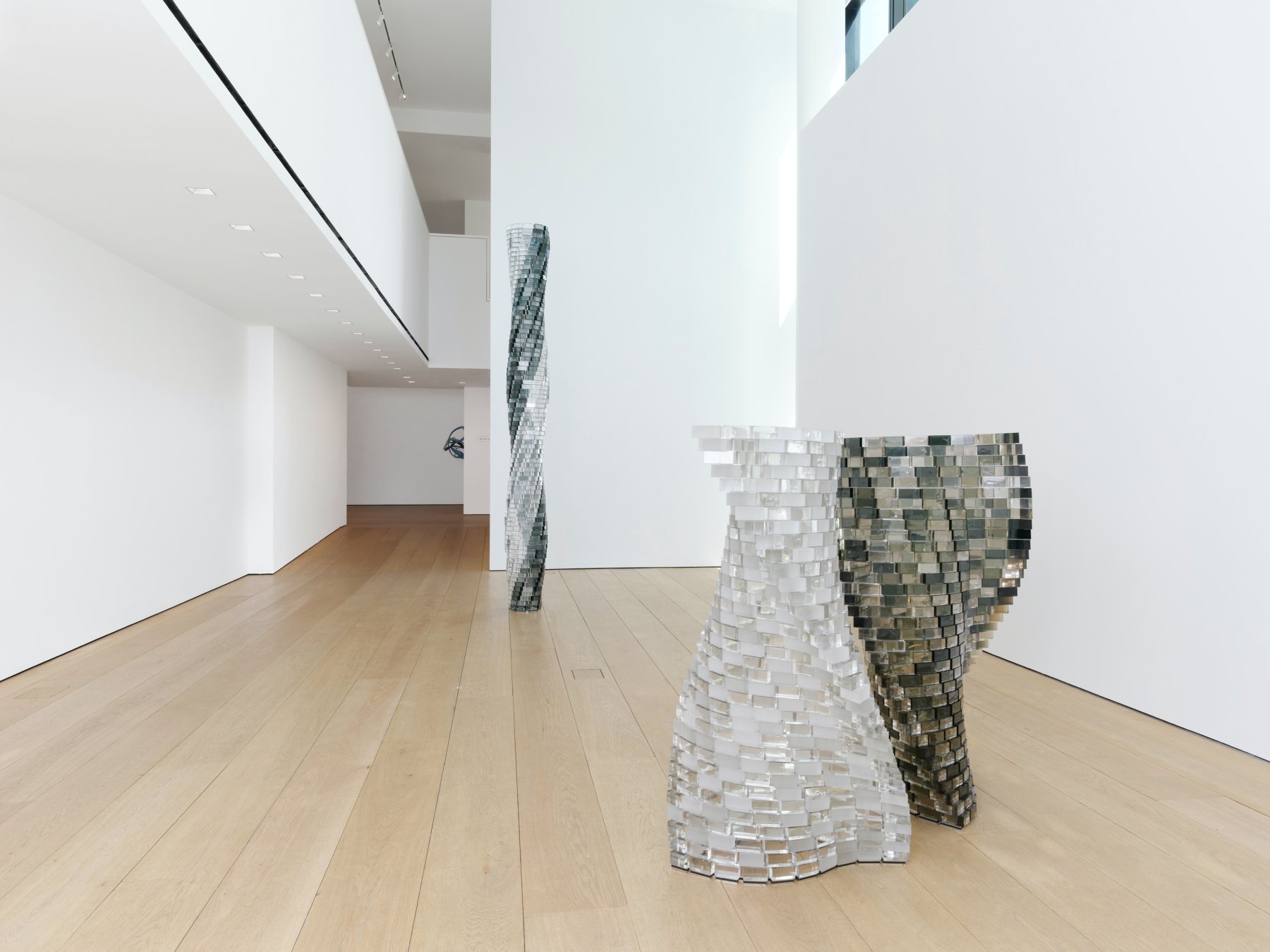 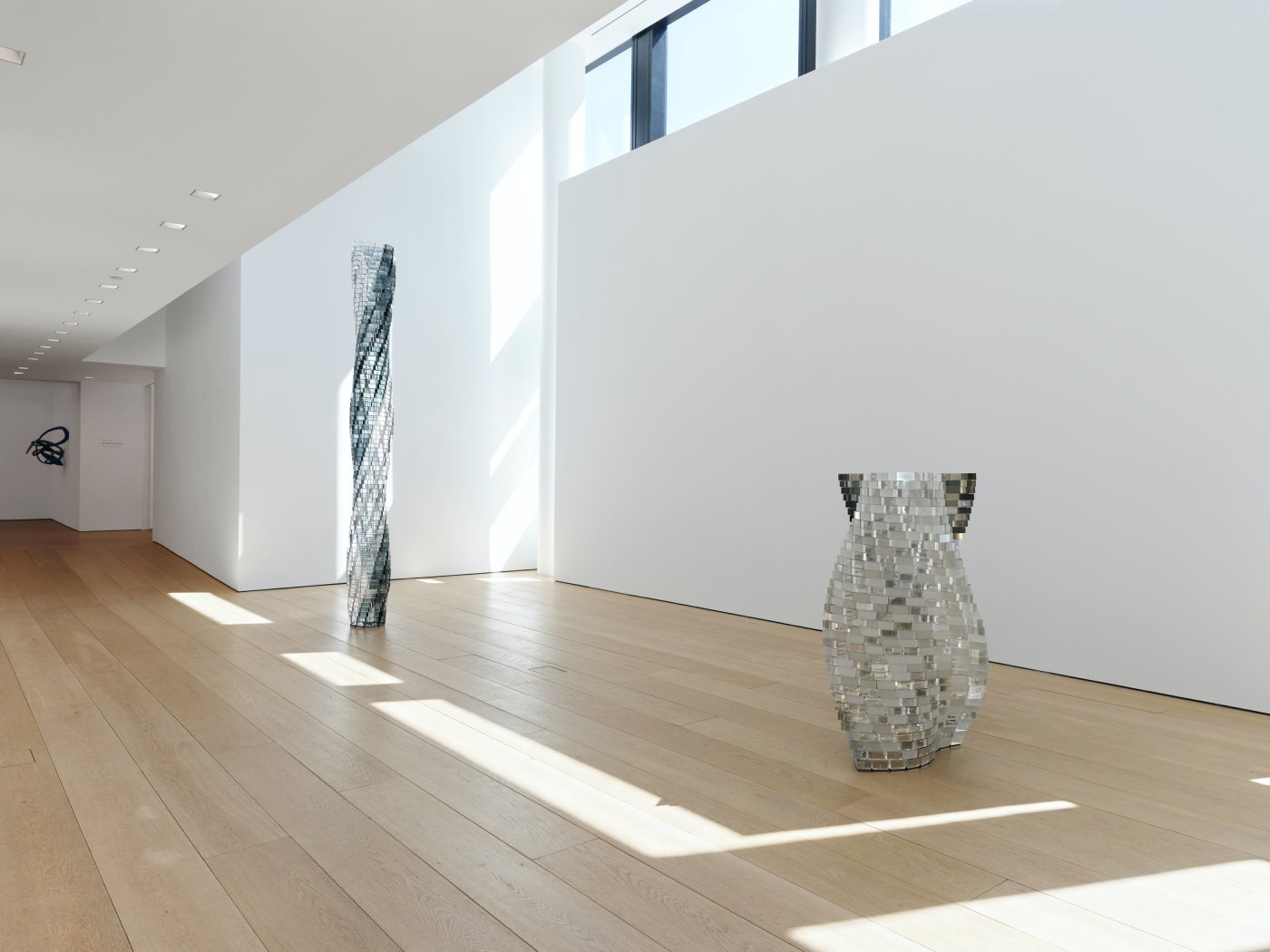 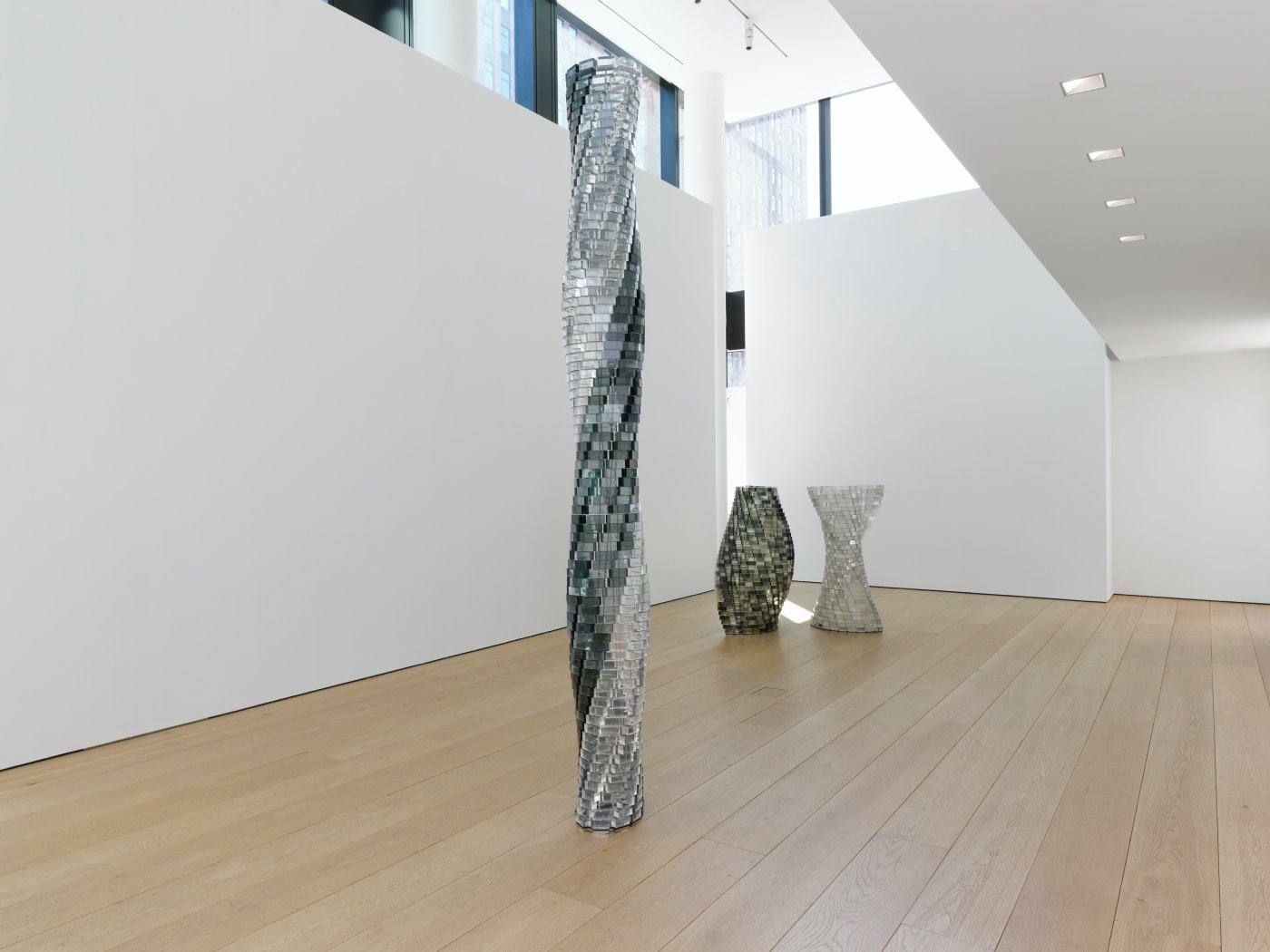 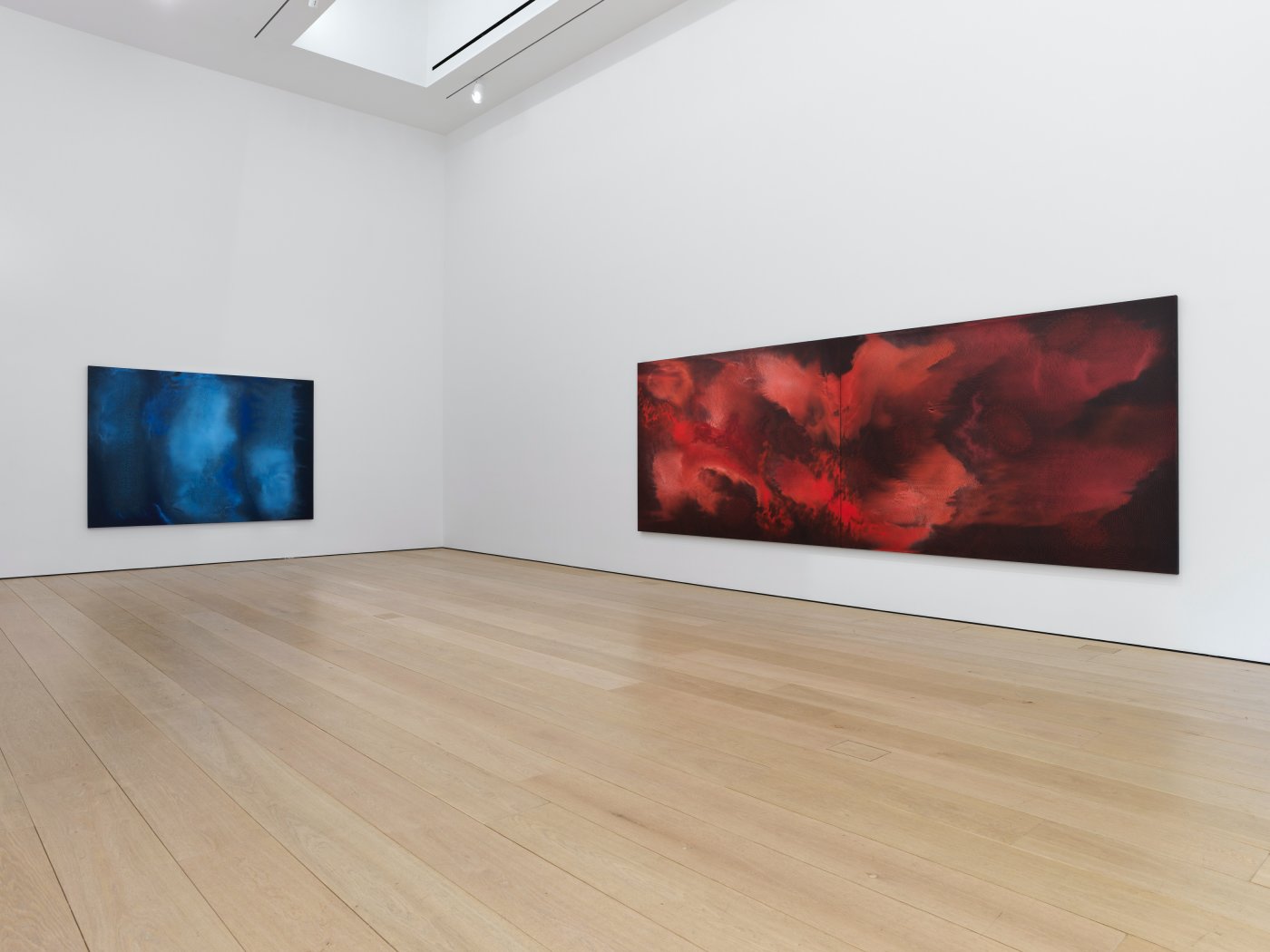 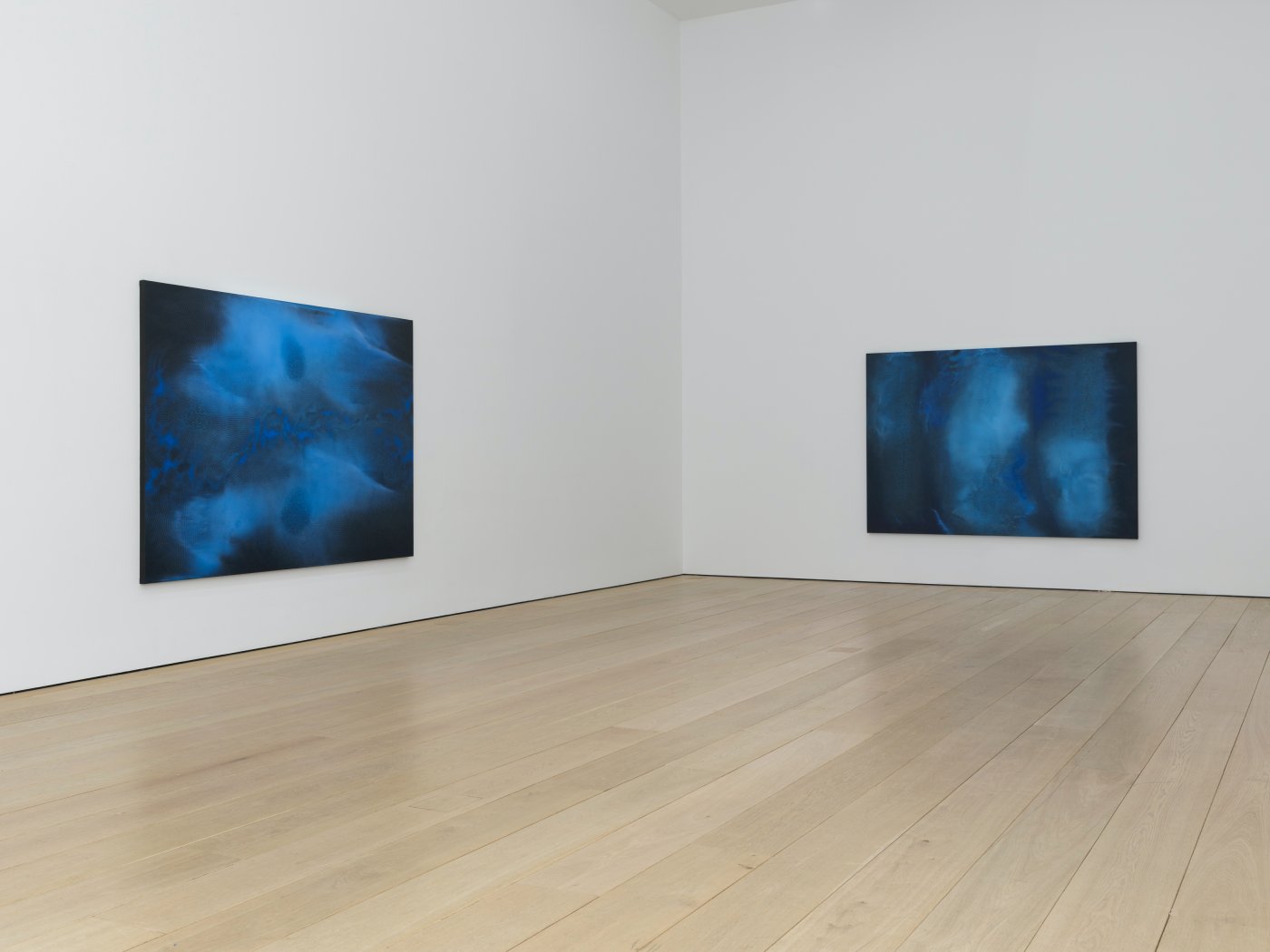 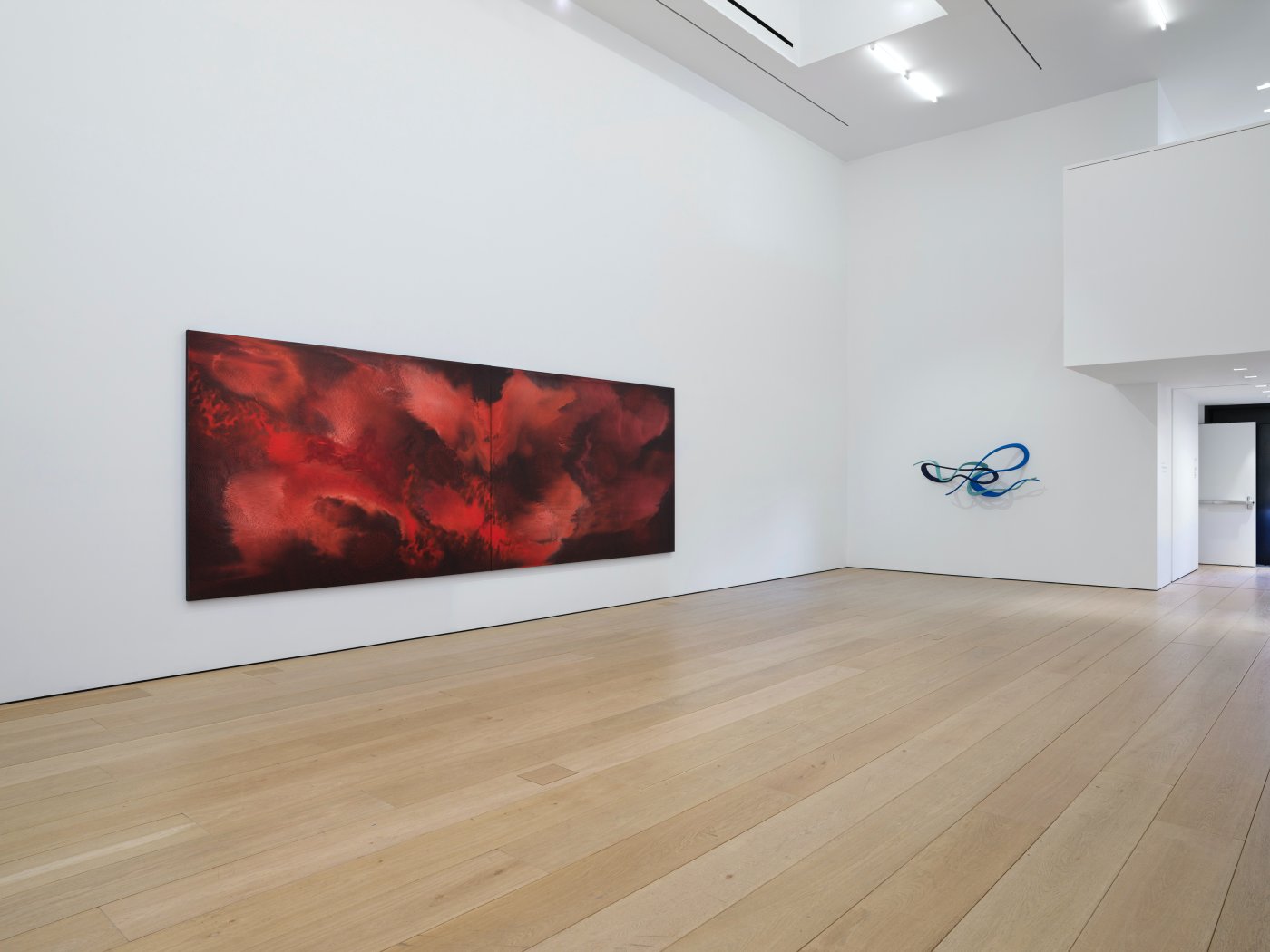 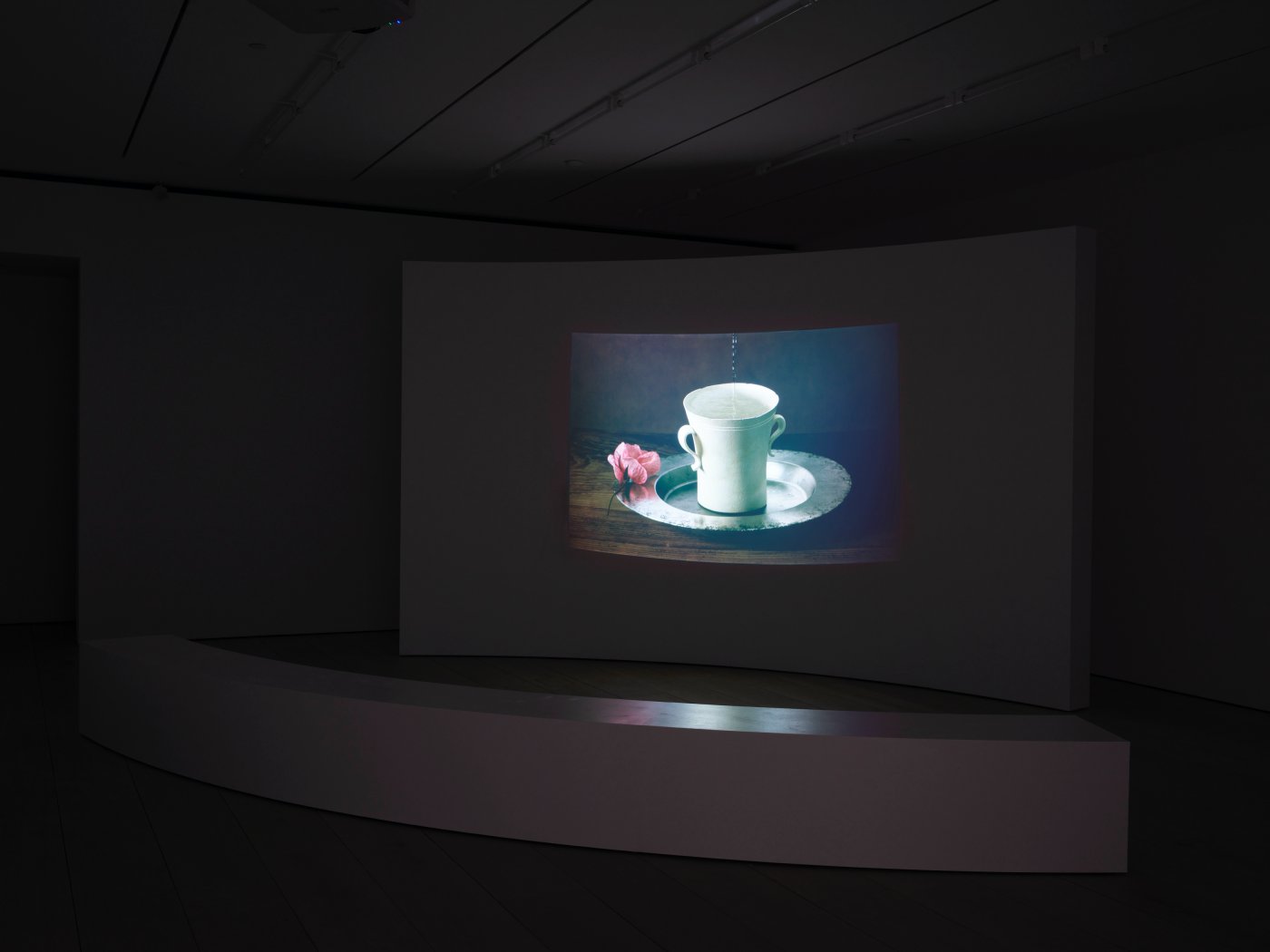 Known for her painting, sculpture, and animation that seek to challenge viewers’ perceptions of time, space, and materiality, Houshiary’s works often engage opposing ideas and states of being, including transparency and opacity, sound and silence, surface and depth, presence and absence. The title of this exhibition is inspired from the word thousandfold to suggest an experience that is a conduit for understanding the world around us. Each work unveils fissures or folds as spaces that inhabit our dreams, imaginations, and perceptions. Houshiary approaches the intangible and evanescent, articulating a metaphysical reality that lies beyond mere form and surface.

Like Mark Rothko, who once said that his color field paintings should be viewed from a distance of 18 inches in order to dominate the viewer’s field of vision, Houshiary’s work rewards a similar mode of looking. From a distance, her paintings are reminiscent of a cosmos or the universe, but as the viewer draws closer the meticulousness, detail, and hidden Arabic letters that make up her amorphous forms begin to unfold. Contradiction and paradox are at the core of her work, and the wide universe within her field of inquiry is often met with complexity. The Arabic words embedded in her compositions are a juxtaposition of the opposing phrases “I am” and “I am not,” oscillating freely between focused and unfocused states, where the meaning of our existence becomes literally superfluous and lost in her imagined cosmos.

With each work, Houshiary attempts to visualize subjects that are inherently intangible—an echo, human breath, or memory. Our breath, not only a condensation of water, is also the anecdote of how the artist began this series. Taking its cue from philosopher Lacan’s theory of the mirror stage (that we understand the self by seeing the self) the artist attempted to look into the mirror to grasp the image of herself. As she failed to see the image, she drew closer to the mirror where her breath left a residue. When she stepped back, it evaporated—a metaphor for the ephemerality of life.

Water is not only an important medium in the making of Houshiary’s paintings, it also speaks to one of the elements that is characteristic of our planet in the universe. Houshiary’s painting technique, which is unique to the artist, involves the successive layering of water, pigment, and line drawing, an intense method that often takes several months to complete. Through this process, the artist creates a platform for water to express itself, movement is organic and free without being controlled by the artist’s hand. Nature takes precedence to make way for what Houshiary refers to as a collaboration with water.

Houshiary takes a similarly methodical approach to her dynamic sculptures such as Aura and Twilight (2019), in which she constructs a tower out of Murano glass in an open form that moves in space and that, layer by layer, seems to emerge from the floor. Each vertical plane of bricks echoes the original shape at its footprint, in this case a seedpod, incrementally rotated to the maximum degree the form will allow before the resulting helix shape becomes unstable. Also featured in the show are wall hung sculptures that challenge both pictorial and sculptural spaces to utilize the wall as a stage: lines curve, loop, and weave, expanding the field of vision to the surrounding gallery space. These seemingly simple twisted hung or floor-based constructions challenge our perception of time and space, to manifest the rhythm that swings between limit and infinity.

Formal elements of Renaissance painting can be found in Houshiary’s work in her composition, rhythm, structure, and depiction of light. This is particularly evident in her new digital animation A Cup and a Rose (2019) inspired by the 17th century Spanish painter Francisco de Zurbarán’s still-life painting A Cup of Water and a Rose (1630) and set to a musical score by Estonian composer Arvo Pärt titled “Cantus in Memoriam.” The modest scale of Zurbarán’s still-life painting (21.2 x 30.1cm) speaks to the beauty of life and the transience of all things. It juxtaposes man-made objects with nature to create an equilibrium where nature and culture are in harmony, an element that has touched viewers through the centuries. Houshiary says:

“My film recognizes that this harmony is at odds at this moment in time, where culture and mankind are in conflict with the natural world. I have animated the still-life first with nature as the context, change is manifested through the transformation of the artefacts, and humanity is metaphorically embedded in the whole. The cup breaks as the pressure of the water within it intensifies and the rose ages only to eventually pulverize as the cup shatters. This video installation echoes the theme of fragmentation and fission to reveal that space where infinity appears fleeting and vanishing only to revert to a plenitude of water and to appear as though all comes and goes again and again with no end to it. There is no perfection and no imperfection, just fluvial movement.”

Houshiary’s A Thousand Folds exemplifies the breadth of her practice to date. The works in the exhibition visualize her ability to engulf the depth of the universe in a ritualistic process using water and layering to create multiple dimensions to the surfaces of her paintings or sculptures. As the title of the show suggests, these works display the many folds of the artist’s practice and the thousand dimensions embedded within her work.

Houshiary’s work is also on view in the exhibition Artists and the Rothko Chapel, curated by Frauke Josenhans, at The Moody Center for the Arts, Rice University, Houston; and at The Sydney and Walda Besthoff Sculpture Garden at the New Orleans Museum of Art, Louisiana.