In her new paintings, Shara Hughes further develops what she refers to as invented or psychological landscapes. These landscapes do not depict real places but rather are created from inside, this inside is strongly informed by a deep knowledge of art history as well as the work of her contemporary peers. 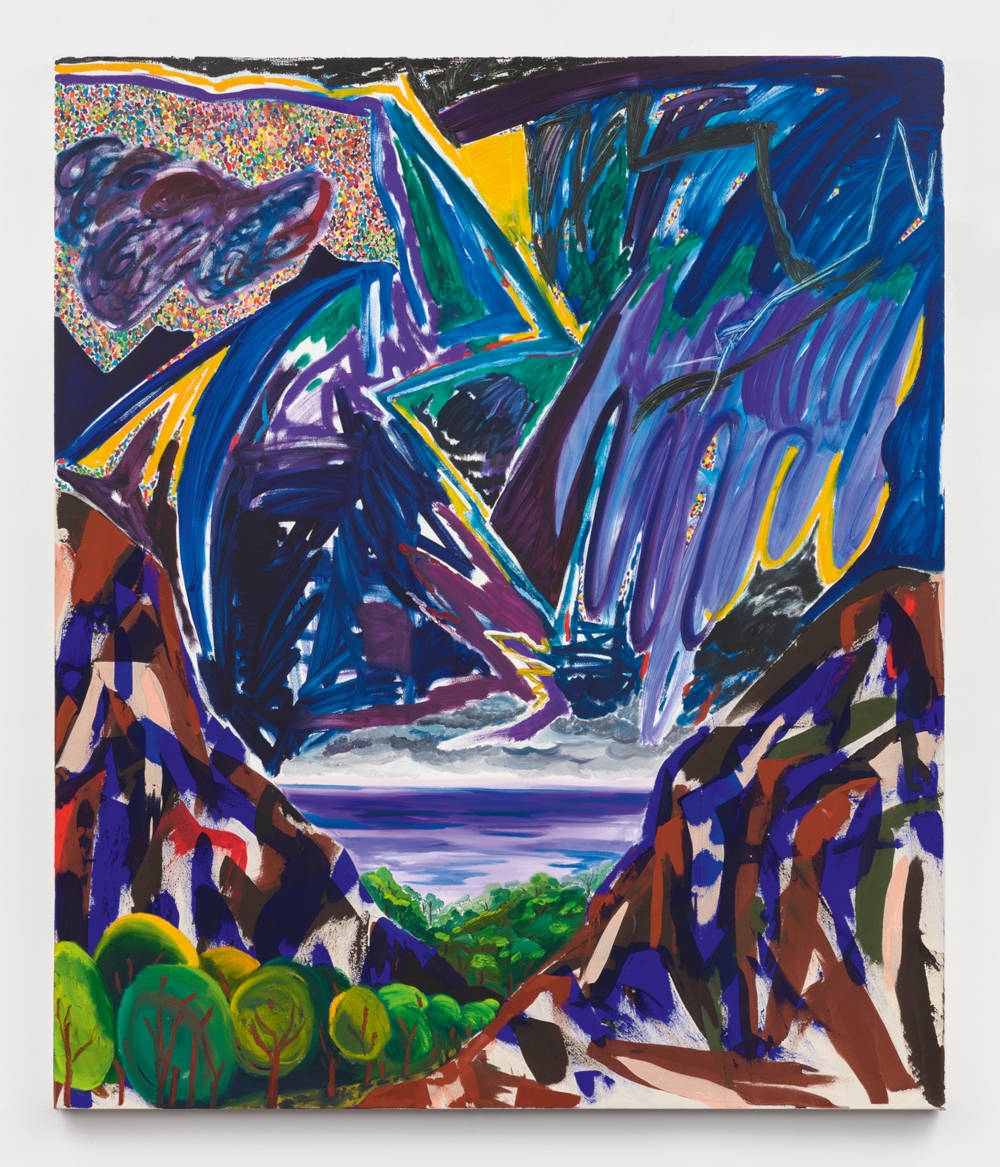 The landscapes Hughes has created for At Arm’s Length differ greatly from one another with regard to format, style, and color, but begin to feel familiar after a while. They all include a valley, mountains, and a lake that is closer or farther away. They all seem to depict the same location from different angles as if one reached it from divergent paths. Most of the paintings are composed of two or more layers: the foreground serves as the point of view and as a barrier, which creates a distance to the far away lake. The tension created by this depth effect focuses the eye and evokes a longing to reach the center of the painting. This distance would be difficult to travel, and yet the landscapes do not provoke despair, but instead meditatively lead to their cores.

The relations between the paintings do not merely reflect a concept Hughes followed during her working process but is the result of an approach that is driven by formal questions as well as by painterly intuition. As a result, Hughes’ visual decisions give room to allegorical thinking that could also be translated into language: as an allegory of longing a lake that is far sums up her new works. The exhibition title At Arm’s Length alludes to this distance. No wonder that the paintings’ titles use everyday language to state the obvious in an almost naive way when directly naming what the paintings depict. This allows one to perceive highly charged and well-known motifs of art history in a fresh way.

In At Full Tilt, a storm raging above a landscape covers most of the canvas. The title could be a comment on the storm and also on the style, which draws upon the energetic brushstroke of expressionism. The sky is simultaneously highly abstract and covered by dark blue alongside yellow strokes and patches evoking lightning. As if the painter wanted to highlight the connection to expressionism’s lively brushstrokes, the sky is divided by a bolt that schematically resembles the pictogram for electricity. The mountains, the tree, and the lake under this sky at full tilt appear like collages, their different styles including a patch of dots resembling an abstract form of Pointillism. Meanwhile, the trees make the space seem much larger than at first glance. The clear horizon allows the eye to rest and grounds the painting, leaving the spectator behind with a quiet feeling of longing.

Cozy Crescent evokes an entirely dissimilar atmosphere. The brushstrokes are much calmer and the landscape is not topped by a bolt but by a crescent. As in At Full Tilt the title suggests what is shown in a naive way and thus removes the moon’s heavy romanticism. Beyond their stylistic differences, At Full Tilt and Cozy Crescent share the composition of the landscape: both feature a center that lets the eye rest and yet is not easy to reach.

The show’s title At Arm’s Length reflects on the feeling of an intimate space that is neither out of reach nor close. At the same time, it reflects the working process in a literal, bodily way: painting is done at arm’s length – a distance that feels close but excludes intimacy. Hughes’ paintings create a mesmerizing effect of pulling the viewer into and pushing them away from the landscapes, thus opening up a utopian space of meditation.

Shara Hughes was born in 1981 in Atlanta, GA, and lives and works in Brooklyn, New York. She graduated from the Rhode Island School of Design and later attended the Skowhegan School of Painting and Sculpture. Recent solo exhibitions include the Newport Art Museum, Newport, RI, 2018; Gallery Met at the Metropolitan Opera, New York, NY, 2018, and the Museum of Contemporary Art of Georgia, Atlanta, GA, 2018, among others. In May 2018, Hughes completed Carving Out Fresh Options, a large-scale mural in Boston, MA, commissioned by the Rose Kennedy Greenway Conservancy in partnership with the deCordova Sculpture Park and Museum. She has participated in numerous group exhibitions at venues such as MASS MoCA, North Adams, MA, and the High Museum of Art, Atlanta, GA. She was also included in the 2017 Whitney Biennial at the Whitney Museum of American Art, New York, NY. Hughes’ work belongs to many prominent museum collections including the Dallas Museum of Art, Dallas, TX; the Denver Museum of Art, Denver, CO; the High Museum of Art, Atlanta, GA; the Jorge M. Perez Collection, Miami, FL; the Metropolitan Museum of Art, New York, NY; the Museum of Contemporary Art of Georgia, Atlanta, GA; the M Woods Museum, Beijing, China; the Phoenix Art Museum, Phoenix, AZ; the Rachofsky Collection, Dallas, TX; the Si Shang Art Museum, Beijing, China; the Smithsonian American Art Museum, Washington, D.C.; and the Whitney Museum of Art, New York, NY; among others.