“I am filled with questions.
Sometimes my questions are answered.
In my heart I know the answer is correct.”
Cynthia in Personal Steam Interface (2019) channelling the wisdom of the Log Lady from Series One of Twin Peaks. 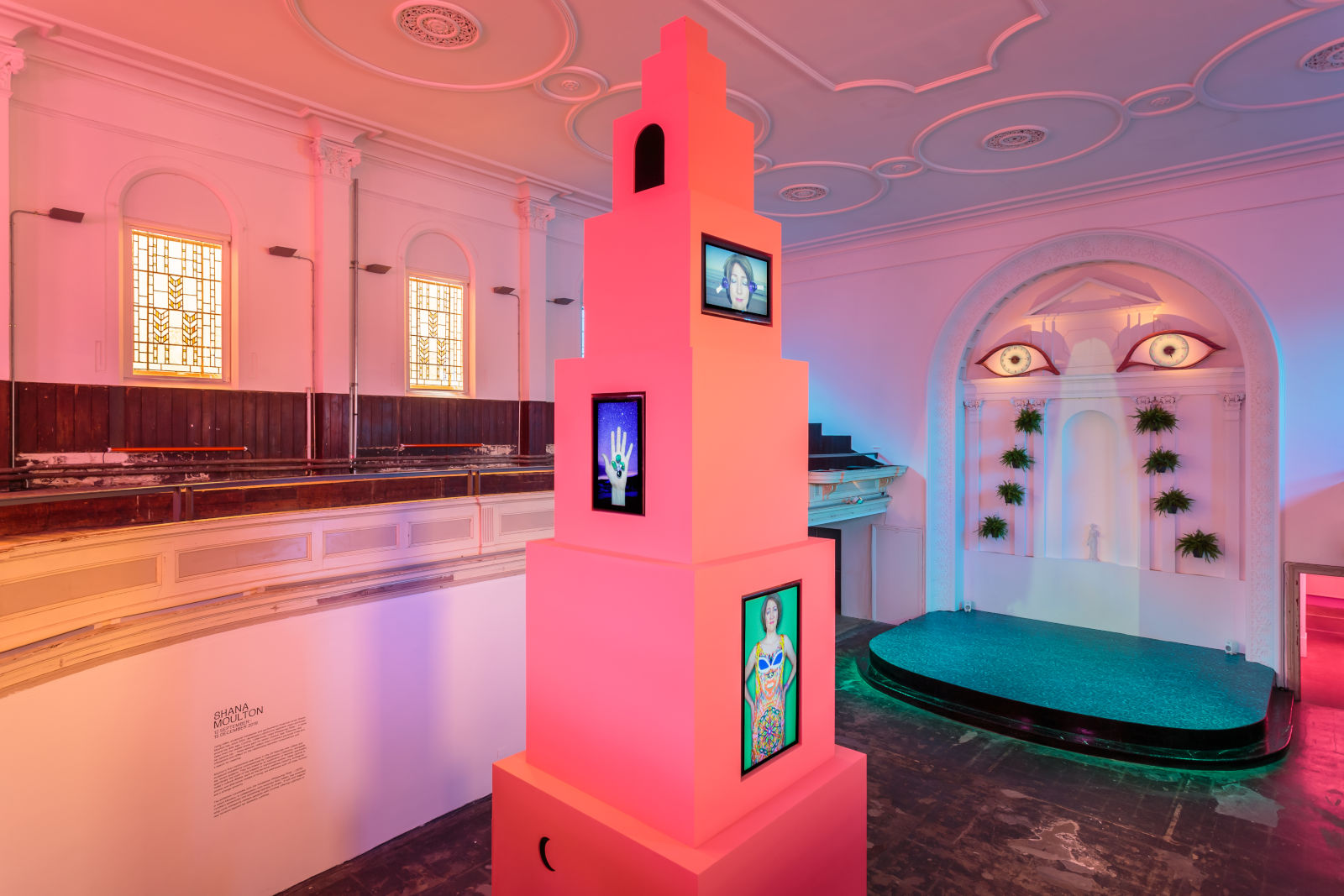 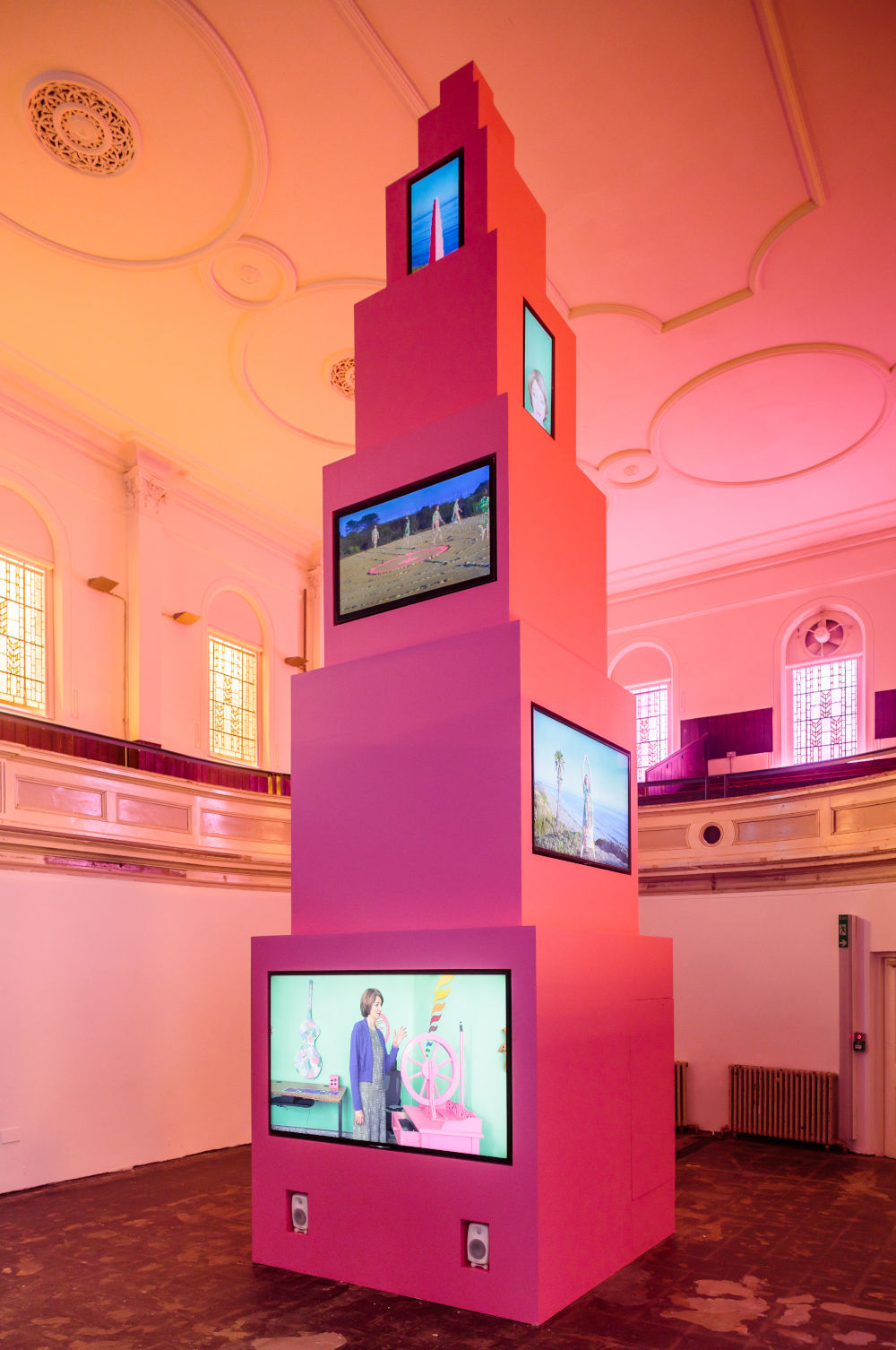 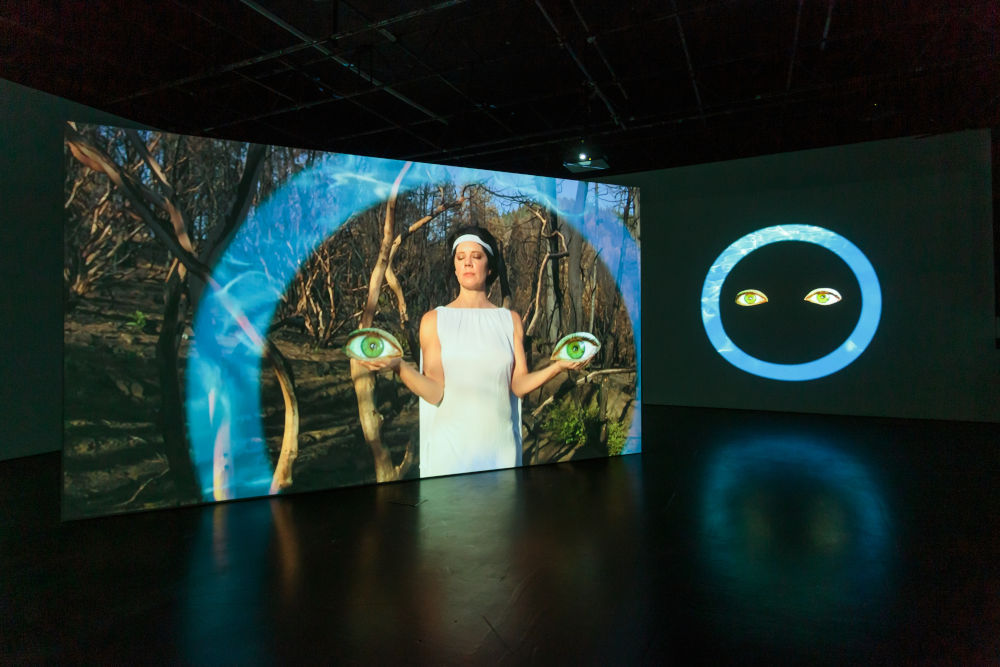 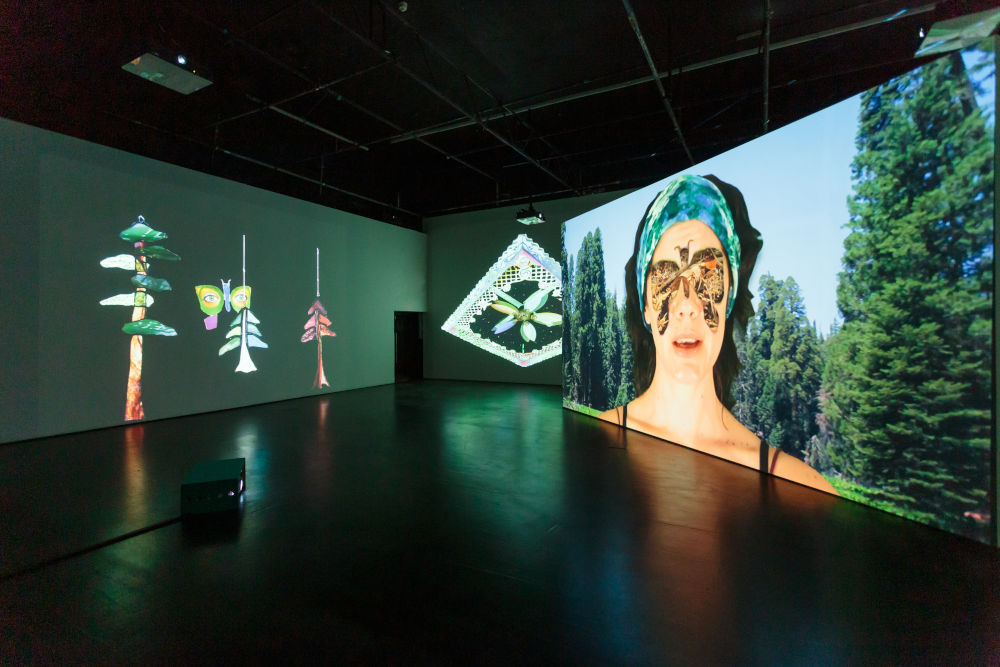 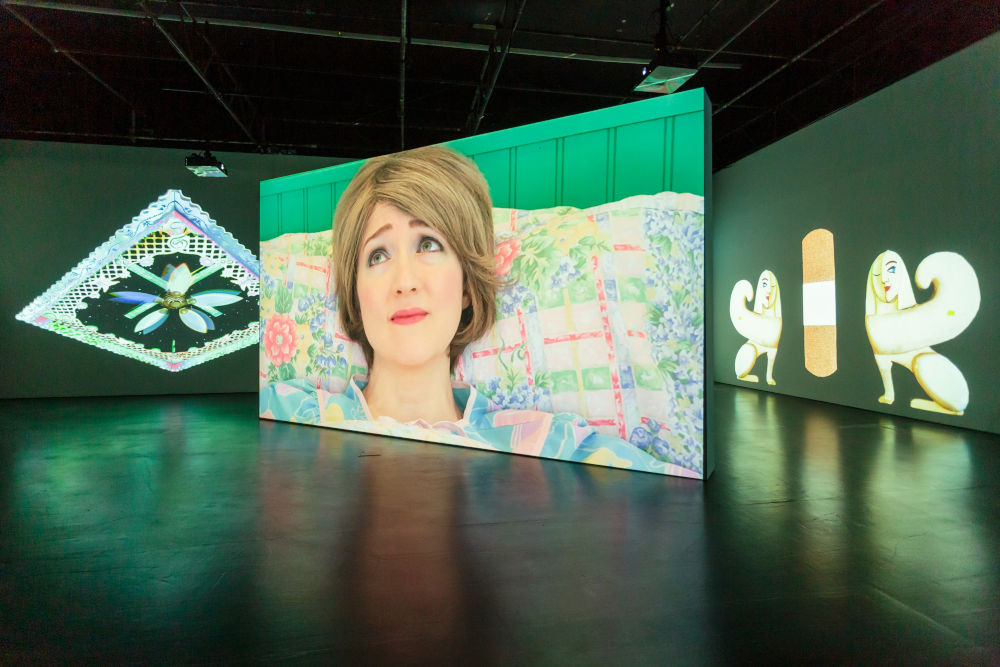 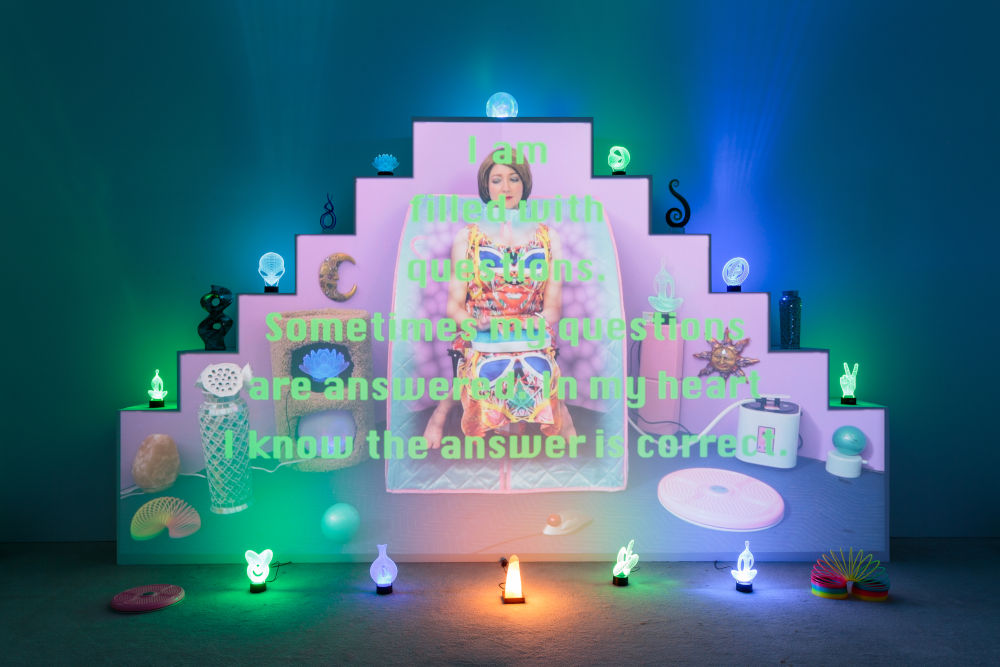 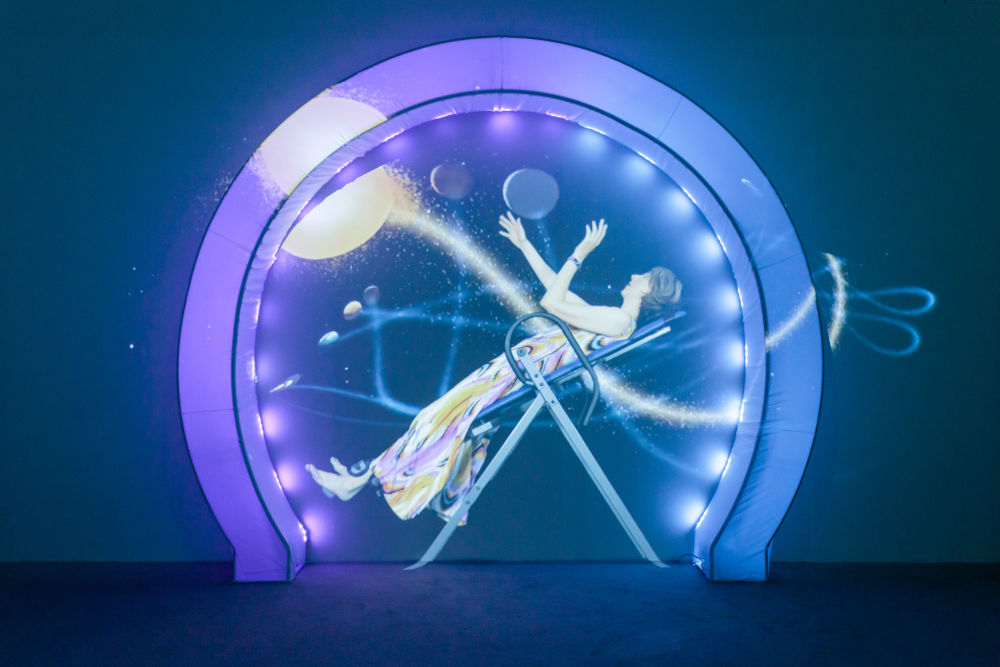 In Moulton’s first institutional solo show in the UK, new video work and sculptural installations commissioned by Zabludowicz Collection are presented alongside key recent projects, all linked together by an exploration of feminist spirituality. Ideas central to today’s cultural debate, such as ecological fragility, the personal wellness industry and alternative models of living are addressed with off-kilter humour and a strange sincerity.

In 2002 Moulton began a body of work she collectively titles Whispering Pines, the name taken from the senior citizen mobile-home park near Yosemite, California that her parents ran. Using video, sculptural installation, costume and performance, Moulton has created a distinctive psychic and aesthetic realm anchored around her alter-ego, Cynthia.

Beset by hypochondria, agoraphobia, and general helplessness in the face everyday life, we join Cynthia on flights of imagination as she seeks to escape the mundane. The domestic environment, both physical and psychological, plays a central role; Cynthia’s home is populated by objects and ornaments that range from ancient and new age totems, to gift- shop modern art and dollar-store kitsch. The narratives in Whispering Pines chart Cynthia’s personal tribulations and the interwoven relationship between spirituality and consumerism in contemporary society.

At the centre of the show is a new commission single-channel video work which explores the religious and folkloric motif of a woman trapped in a tower. It references the legend of Saint Barbara, a virgin martyr of the early church who imprisoned and ultimately beheaded by her wealthy pagan father for converting to Christianity and refusing an arranged marriage. In a twist to the tale, on his return home the father was struck by lightning and reduced to ashes.

This new video is presented in the Main Hall at the base of a pink tower structure which rises over six meters and is based on Montessori School children’s stacking blocks. Seven other channels of video on monitors of decreasing size spiral upwards round its face in a cascade of images and sound, outlining steps to self-actualization and self-healing. Facing this, on the gallery’s church altar architecture, is a site-specific waterfall and pool installation, which will double as a stage for a new performance Moulton will present with her musical collaborator Nick Hallett on 14 December 2019.

Moulton’s references to a woman in a tower or a damsel in distress suggest notions of visible yet isolated entrapment. It offers a metaphor for how contemporary patriarchal capitalism, predominantly via the structures of the internet, channels aspirations of freedom back into a feedback loop of anxiety-inducing ideals, goals and failures. It is also reminiscent of the madwoman-in-the-attic trope of Victorian gothic literature, in particular Charlotte Brontë’s Jane Eyre (1847). Moulton uses these stereotypes to reclaim ownership over them, transforming constraints into modes of resistance: what appears to be imprisonment or agoraphobia might actually be a choice to explore one’s inner life.

The interrelation between feminist spirituality and ecological protection comes to the fore in the Rear Gallery, which houses the multi-channel video operetta Whispering Pines ∞ (2018), made in collaboration with musician Nick Hallett. Here Cynthia acts out her desire to become an environmental activist, despite her uncertainty about leaving the house. Julia ‘Butterfly’ Hill is her main guide on this voyage, a character based on the real person who from 1997–1999 spent 738 consecutive days inside a giant redwood tree named Luna, successfully blocking its felling by a logging company. Ascending through a chimney up into the canopy of sequoia, and into a cosmic sky to meet singing spirits, Cynthia discovers how to stage a sacrifice to the earth, in a ritual that connects political action to performance art. Ultimately, however, the quest for enlightenment leads only to Cynthia being overwhelmed and frustrated both by technology and nature.

In the Middle Gallery Cynthia’s thwarted attempts to reach out to the world at large continue in the installation Personal Steam Interface (2019). Typing on a keyboard from inside a personal sauna tent, she asks the oracle of our mass consciousness – the Google search bar – a series of questions such as ‘who do I look like?’, ‘what is the weather?’, ‘how old is Jennifer Lopez?’, ‘when is black friday?’ and ‘where is the love?’. Surrounded by glowing lamps, figurines and a giant Slinky Cynthia bursts free of her confines and dances wildly, to the point of exhaustion, in an attempt at cyberspace connection. 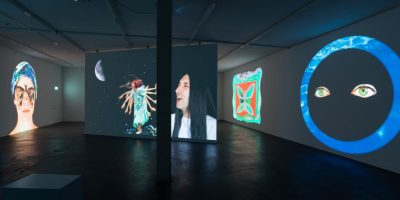