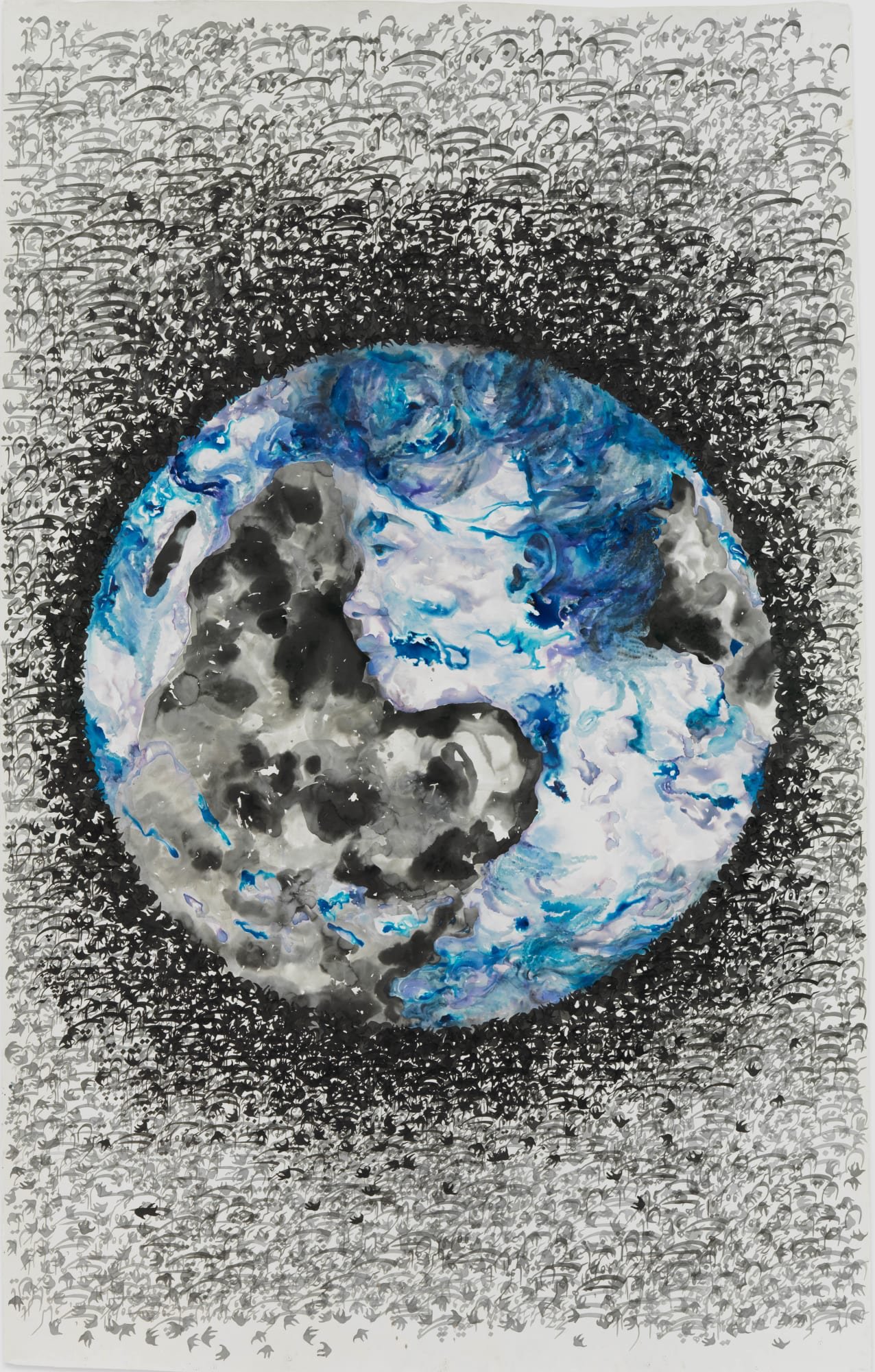 The exhibition coincides with another important solo show at Jesus College, University of Cambridge, 15 October 2021 – 18 February 2022, as well as a major touring retrospective organised by the RISD Museum, at the Morgan Library & Museum until September 2021, followed by the RISD Museum from 12 November 2021 and the Museum of Fine Arts, Houston in spring 2022.

The exhibition at Pilar Corrias includes an animated film, Reckoning (2020), which is created from multiple drawings by the artist. Evoking movement, displacement and migration, the film is concerned with the moments of reckoning occasioned by cyclical struggles such as those between migrants and citizens, women and power, human beings and the natural world, even life and death. The film opens with a fluid female face, made up of thousands of dust-like particles, which compresses and expands before transforming into two warrior figures. A soundtrack by Du Yun is performed by Pakistani vocalist Zeb Bangash.

New for this exhibition is a glass tesserae painting which takes its cue from the dynamism of the pixel, a parallel to the unit of the mosaic. An uprooted female figure holds at her chest a chalawa (the Punjabi term for a small, disappearing mythic farm animal, functioning as a poltergeist), a creature that typically cannot be confined, alluding to the transient and uncapturable characters of both.

There is also a number of large-scale paintings on display depicting oil wells, often described colloquially as ‘Christmas trees’ because of the tree-like appearance of their assemblage of pipes and spools. Trees are a recurring motif in Sikander’s work – a tree also appears in Reckoning, referencing the Adam and Eve story. These works explore the irony of assigning a moniker associated with abundance and gift-giving to a weapon of extraction – the depletion of the natural world is a literal and figurative representation of the pillaging of colonialism and the devastation of the climate crisis.

In Sikander’s practice images of the feminine provide a counterpoint to the abuses of extraction, depletion and waste, with women acting as symbols of abundance, renewal and rebirth. The disembodied coiffures of milkmaidens (gopis) in Indian paintings feature frequently, as do floating female figures indicating agency and resistance to control. A new large drawing depicts a globe which contains a female profile in the shape of an ‘upside-down’ Africa, referencing the Eurocentric nature of modern cartography and the continent’s history of European colonial intervention. The globe also appears as a satellite image, outer space around it denoted by densely packed Urdu script that is so closely layered and cross-hatched as to become illegible, meaning the written word also bears an uncanny resemblance to space debris.

Text is an important facet of Sikander’s work and the artist is particularly inspired by female poets including Adrienne Rich, Audre Lorde, Wisława Szymborska, Fahmida Riaz, Parveen Shakir and Solmaz Sharif. This drawing is shown adjacent to a small painting depicting three, stacked floating figures, their bodies tessellating together in weightless, elastic contortions. Similar pairings are shown throughout the exhibition, inviting an examination of the importance of wonder and wit in Sikander’s work.

At the National College of Arts in Lahore, Sikander received training in “miniature” painting, a term and practice Sikander seeks to decolonise. This exhibition’s companion show at Cambridge further unpacks the issue with “miniature’ versus maunscript painting. The techniques and ethos of manuscript painting, as well as the ways in which European colonialism have shaped its fate – many South Asian manuscripts were dismembered and sold for profit – are consistent threads through, and a lens for, all her work: the pixels that make up her animations, much like the tiles of her mosaics and the letters in her text works, are all minuscule fragments conjuring the precise building blocks of a truncated genre.

Shahzia Sikander lives and works in New York City. Her innovative artistic practice led to her meteoric rise internationally in the mid-nineties with survey exhibitions at the Renaissance Society at the University of Chicago, 1998, the Kemper Museum of Contemporary Art 1998, the Hirshhorn Museum and Sculpture Garden 1999, and the Whitney Museum of American Art 2000. Sikander has had major solo exhibitions throughout the world, including most recently at the Morgan Library and Museum, New York, 2021; the Asian Art Museum, San Francisco, 2017; the Aga Khan Museum, Toronto, 2017; MAXXI | Museo nazionale delle arti del XXI secolo, Rome 2016; the Asia Society Hong Kong Center, Hong Kong, 2016; the Guggenheim Museum, Bilbao 2015; the Smithsonian American Art Museum, Washington D.C. 2012; the Museum of Contemporary Art, Tokyo, 2010; the Irish Museum of Modern Art, Dublin, 2007; the Museum of Contemporary Art, Sydney, 2007; the Pérez Art Museum Miami, 2005; and at the San Diego Museum of Art, California, 2004 amongst others. Sikander has been invited to participate in significant international biennials such as the Lahore Biennale 01, Pakistan; the Karachi Biennale 17, Pakistan; the 6th Moscow Biennale of Contemporary Art, Manege, Russia; the 8th and 13th Istanbul Biennial, Turkey; the 5th Auckland Triennial, New Zealand; the Sharjah Biennale 11, Sharjah Art Foundation, UAE; the 54th and 51st International Art Exhibition of La Biennale di Venezia, Italy; and The Whitney Biennial, New York amongst others. In addition, she has been included in notable group exhibitions at institutions such as the National Museum of Modern and Contemporary Art, Seoul; Martin-Gropius-Bau, Berlin; the Museum of Modern Art, New York. Amongst the numerous awards, grants, and fellowships Sikander has received are the KB17 Karachi Biennale Shahneela and Farhan Faruqui Popular Choice Art Prize, 2017; the Religion and the Arts Award, 2016; the Asia Society Award for Significant Contribution to Contemporary Art, 2015; the National Medal of Arts Award presented by U.S. Secretary of State, Hillary Rodham Clinton, 2012; the John D. and Catherine T MacArthur Foundation Achievement ‘Genius’ award, 2006; and Tamgha-e-Imtiaz, the National Pride of Honor Award presented by the Pakistani Government.