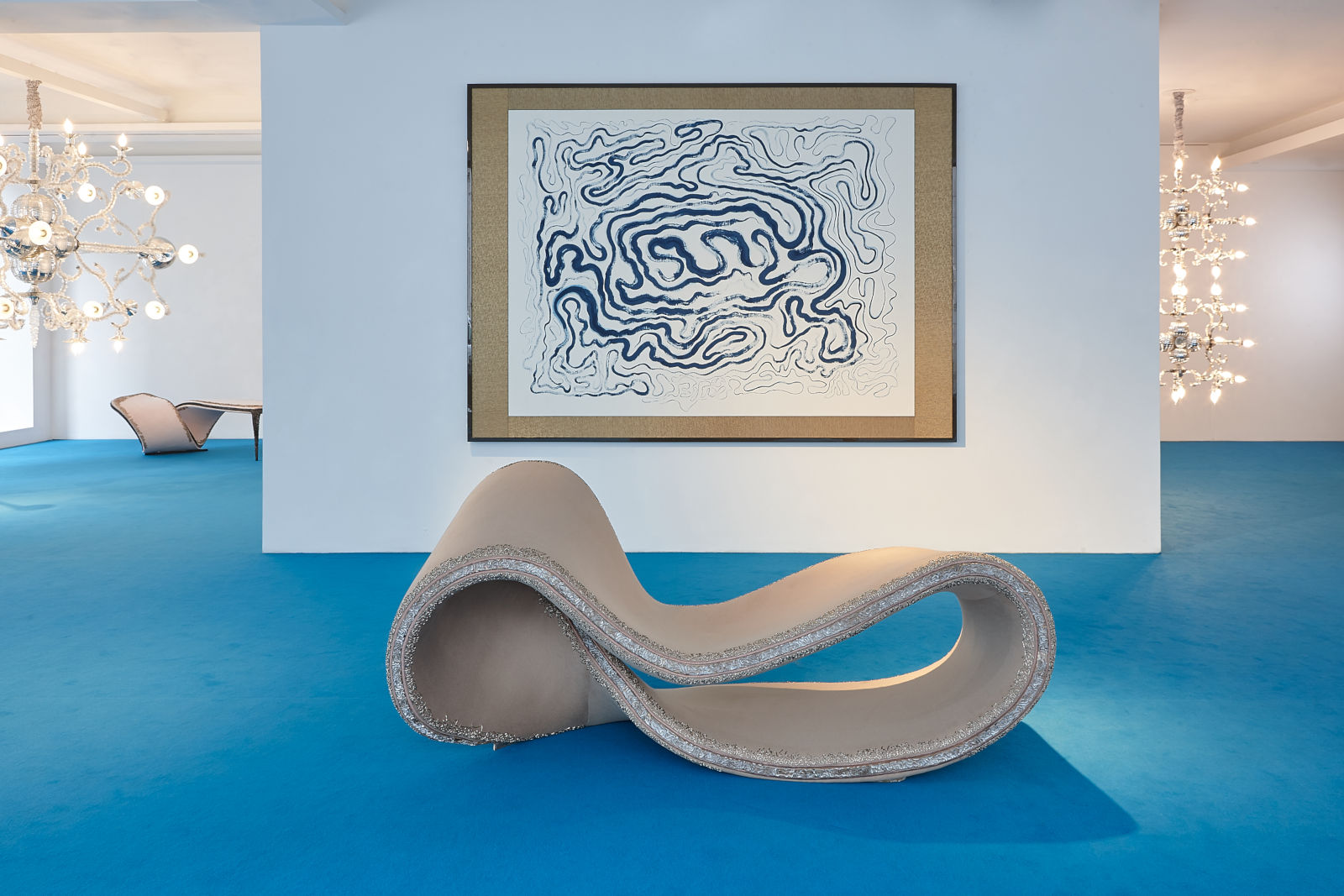 Sebastian Brajkovic makes sculptural furniture that subverts design conventions, creating elegantly distorted containers through which to relay complex ideas. Since graduating from the Design Academy Eindhoven, in 2006, Brajkovic has developed a distinct and radical vernacular, establishing him as the maker of contemporary design classics. His works are collected by major institutions including the Victoria and Albert Museum, the Museum of Art & Design, New York, and the Museum of Fine Arts, Houston.

The Occidental Artisan is anchored by a group of benches and chairs whose iconoclastic, anthropomorphic forms are juxtaposed with a restrained, 18th century aesthetic. Brajkovic conceives of the seat and the sitter as two bodies interacting, each a reflection of the other. ‘I see the chair as a human shape that holds us,’ he says; ‘I look at a bench and ask, how does it move, where does it turn or twist at the waist?’

Calligraphic painting, and the sheer physicality of making it, evokes Brajkovic’s bodily experience of his art; having trained with a Chinese master, he uses calligraphy to ‘look for shapes.’ The sweeps and curls of Banquette, Gallivant, Lemniscate and Tao Tie Man are 3-D expressions of those inky brush strokes.

Brajkovic also explores time, history, fine art and mathematics in his practice, but always with beauty as the endgame. ‘I like taking mathematical thoughts and doing something elegant with them,’ he says, and nowhere is this clearer than in the Lemniscate chair. A delicately embroidered Mobius Strip, this piece is the embodiment of that process of disorientation that so beguiles in Brajkovic’s work. ‘I want to make things that are simple but I find it necessary to place considerable obstacles in my way,’ he says.

His determinedly artisanal, even archaic, techniques speak to a love of materials, but also to his preoccupation with what he calls ‘agelessness.’ While they appear to have been plucked from an Enlightenment drawing room and manipulated by the hand of some mischievous deity, these works are also redolent of ancient worlds and other eras, while anticipating an uncertain future. ‘I like the idea they might have come out of the ground, that the marks of time are visible on their surfaces. Perhaps they were discovered on an archaeological dig,’ suggests Brajkovic.

In a departure from his earlier work, especially the acclaimed Lathe series [2006-2016], Brajkovic has eschewed the use of digital technology, honouring instead the presence of the hand. ‘We don’t want to unlearn our instinctive ways of making and relinquish our souls to the robots,’ he says. Brajkovic’s hand is evident in the faintly oxidized patina on the bronze structures of his seats, in the upholstery he fits himself and then sends to couture embroiderers with drawings as guidance, and in the horsehair stuffing he prefers for its sculptural malleability.

Three chandeliers, created in Murano, the largest measuring 4 metres in length, see Brajkovic working with glass for the first time. Each one is made from a cluster of smaller pendent lights, forming matrices that are perfectly balanced yet extravagant and ghostly; relics of another, unidentifiable time. He will also show works on paper that provide an insight into his practice and reflect the layering of eastern and western cultures inherent in his identity.

Born in Amsterdam in 1975 to a Dutch-Indonesian mother and a Croatian-Italian father, Brajkovic studied cabinet-making at the Meubelvakschool before enrolling at the Eindhoven Design Academy. He made his first Lathe chair for his final student show, in 2006, which was then exhibited to much acclaim at Salon Milan in the same year. Brajkovic first showed with Carpenters Workshop in 2008 and has since made five Lathe series. He created his first piece for David Gill, Banquette, in 2018, and is now represented by the gallery. Brajkovic lives and works between Amsterdam and Switzerland with his Hong Kong Chinese partner.

Courtesy of the artist and David Gill, London