The exhibition Sculptures By at Eva Presenhuber, New York, brings together works by artists who started to develop their positions in the early 1990s, who have established themselves over the last 30 years and who continue to shape the current language of the medium of sculpture along this trajectory. In this exhibition, recent and historical works are combined with specific works by artists of following generations, which take on the spirit of that time in their individual approaches. 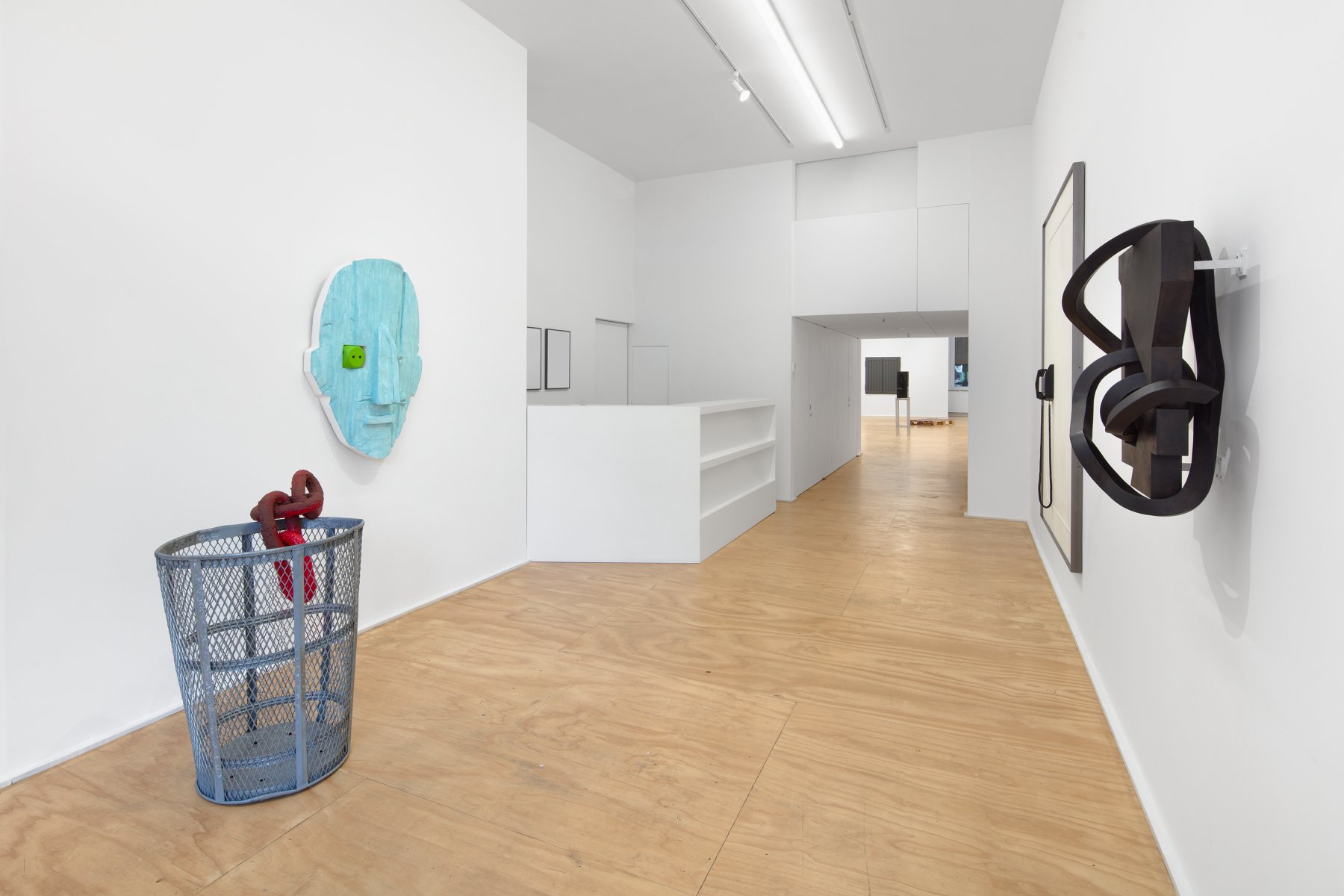 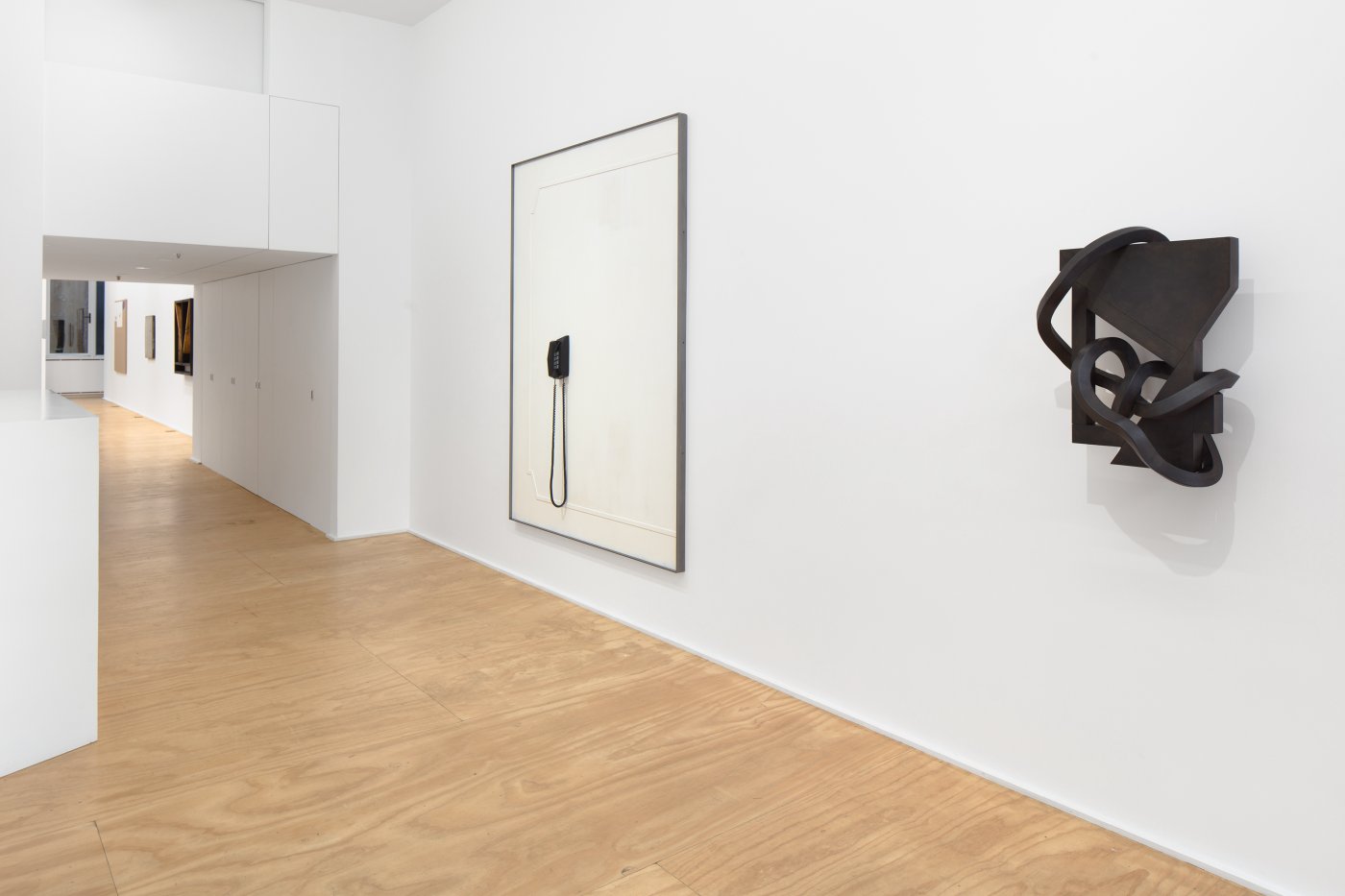 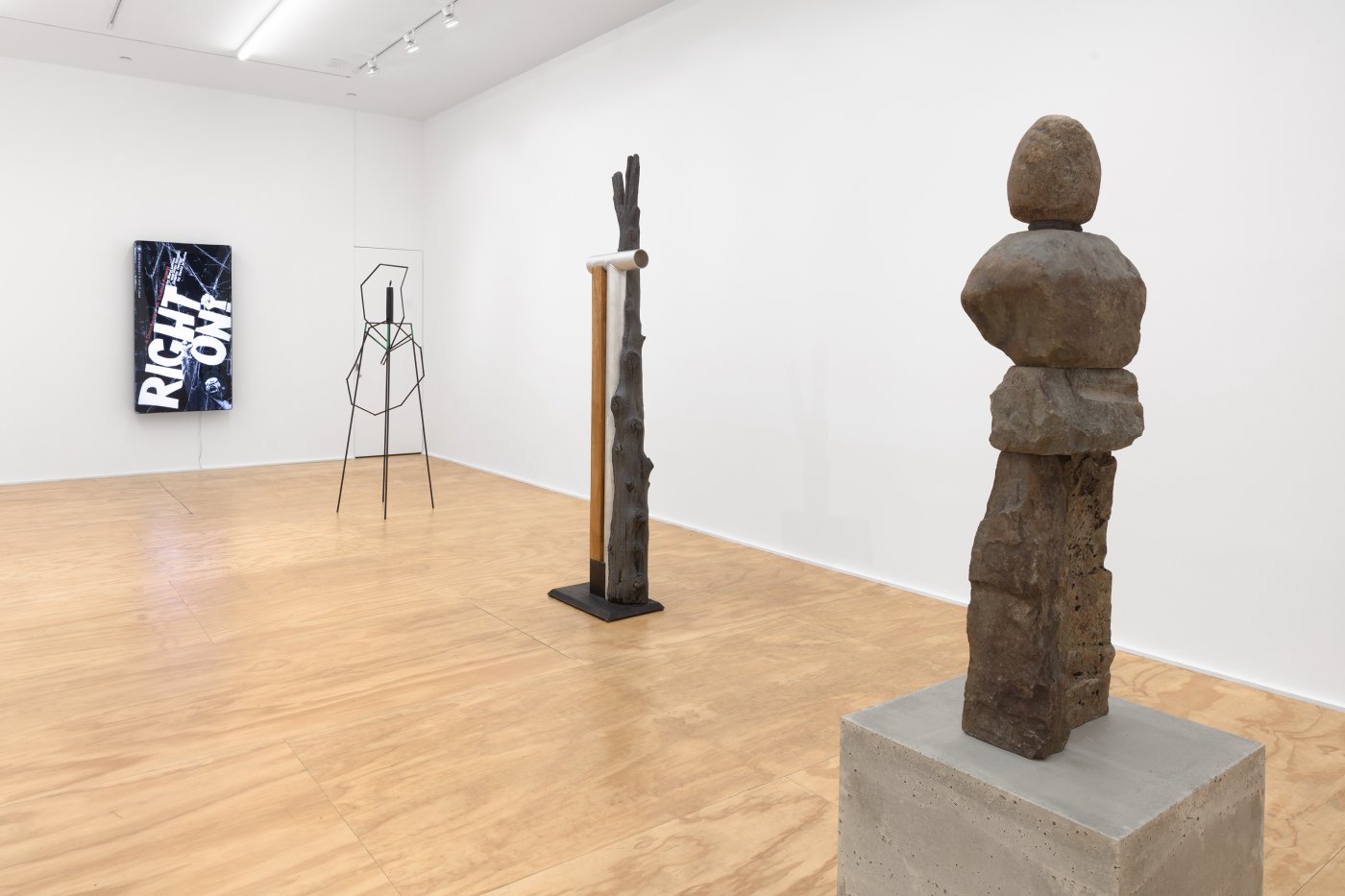 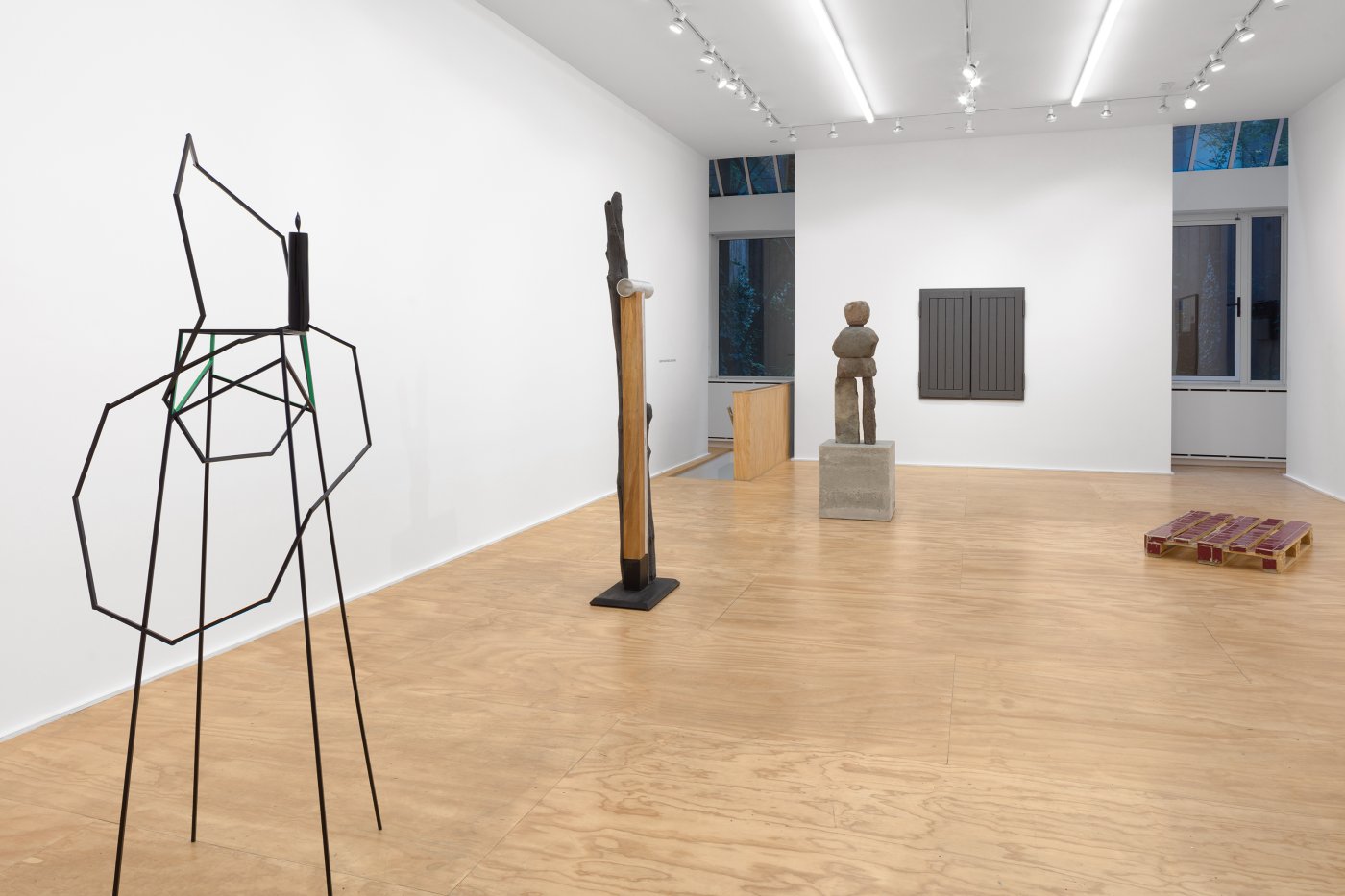 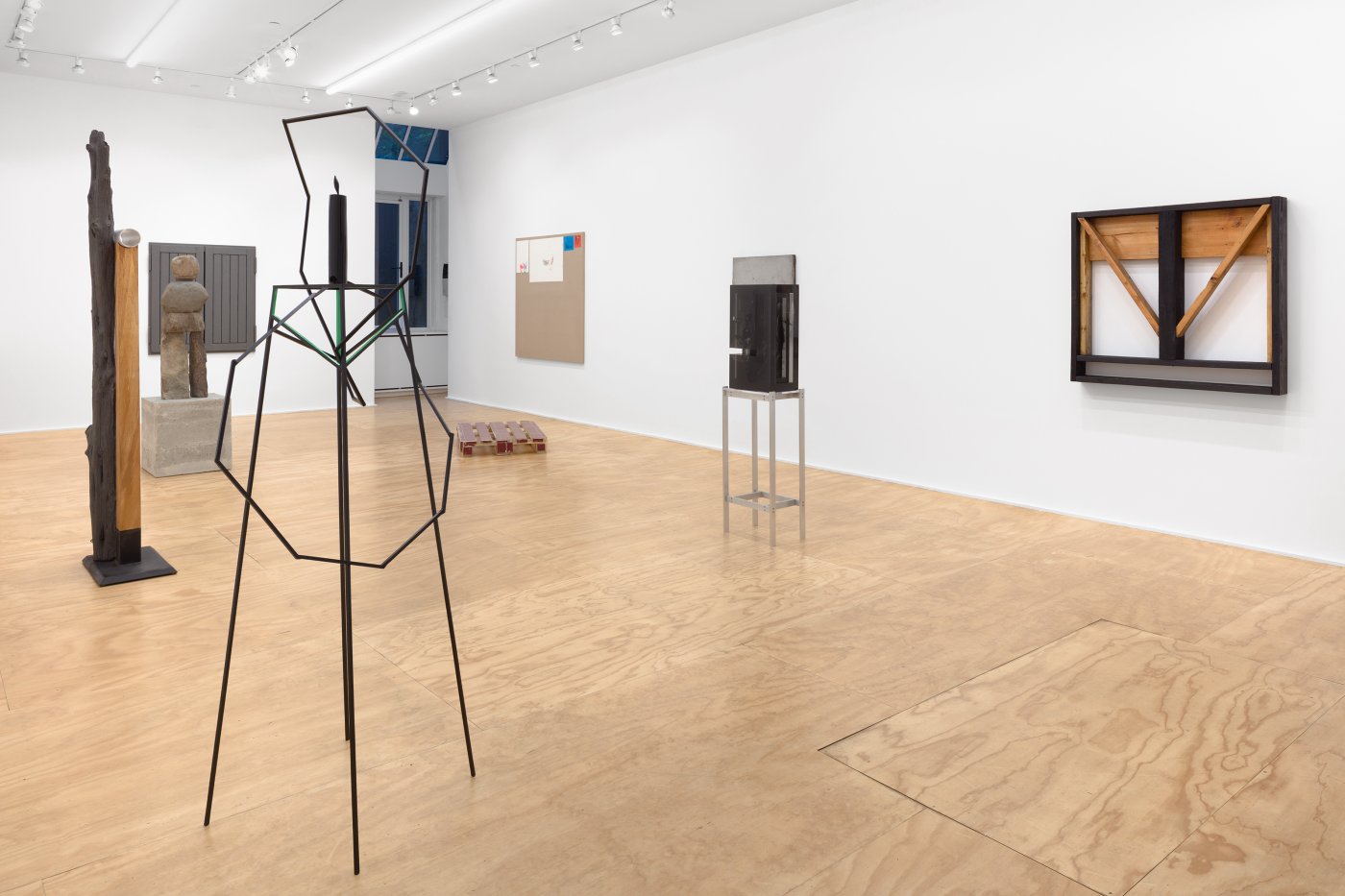 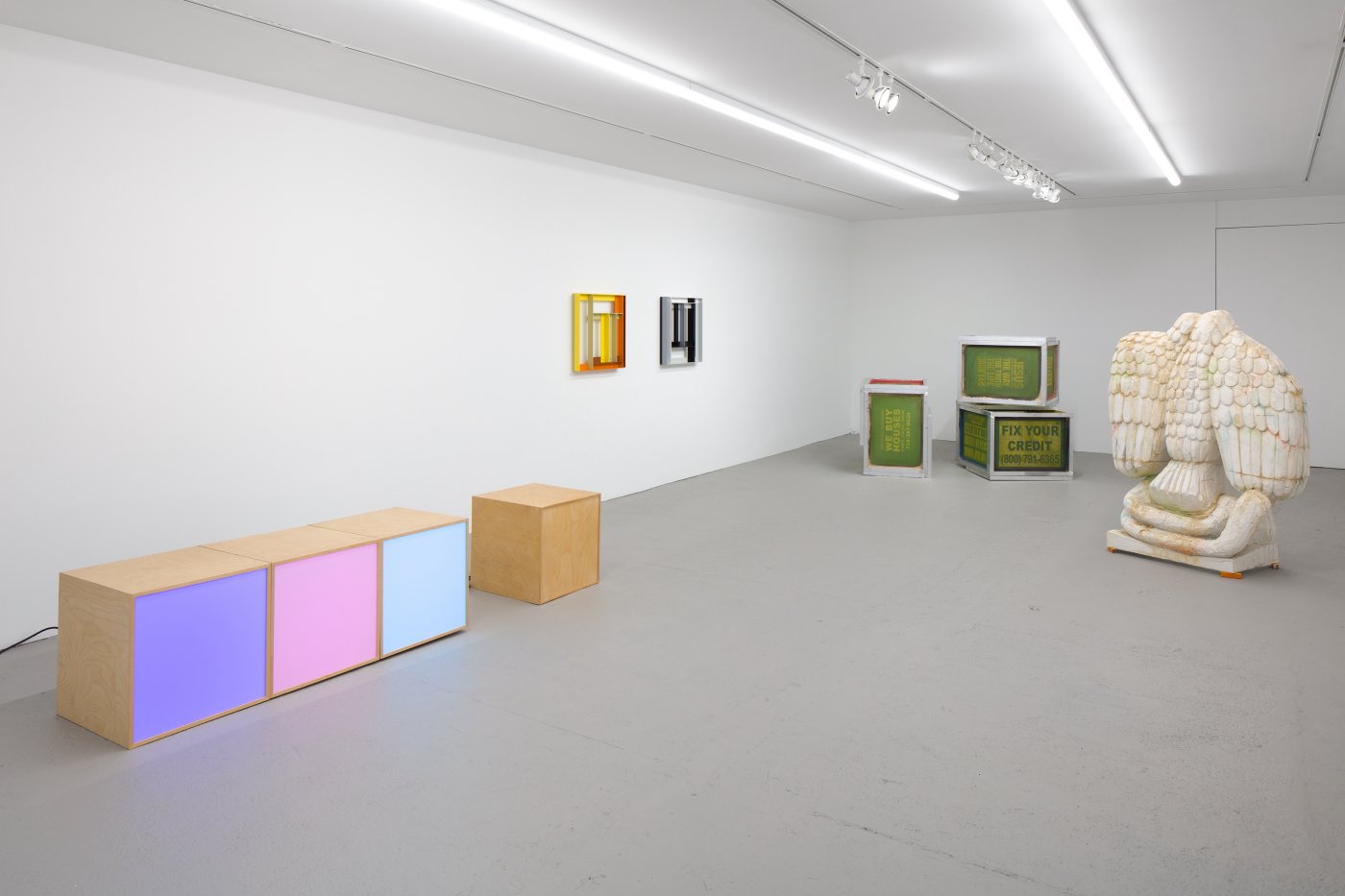 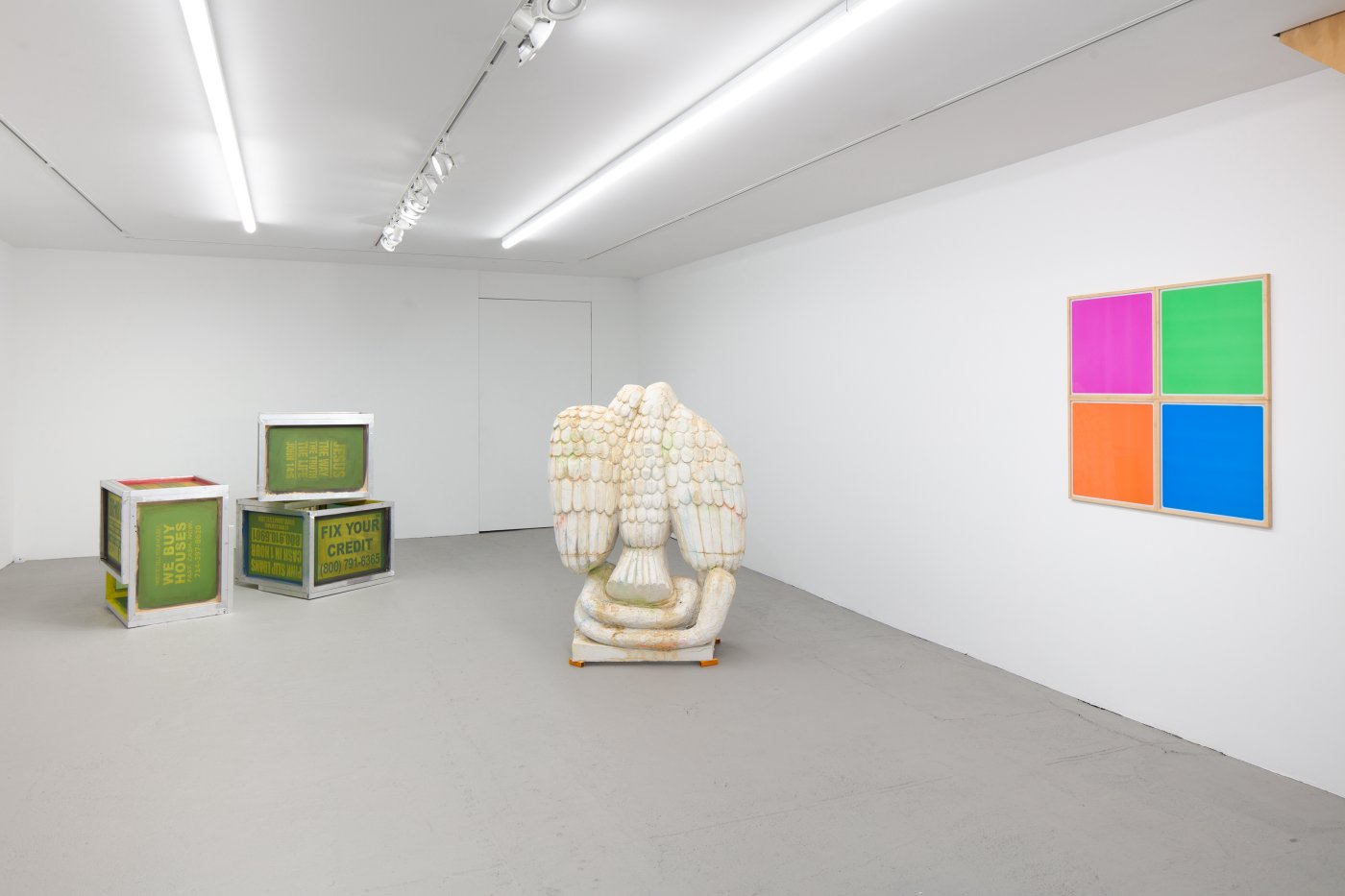 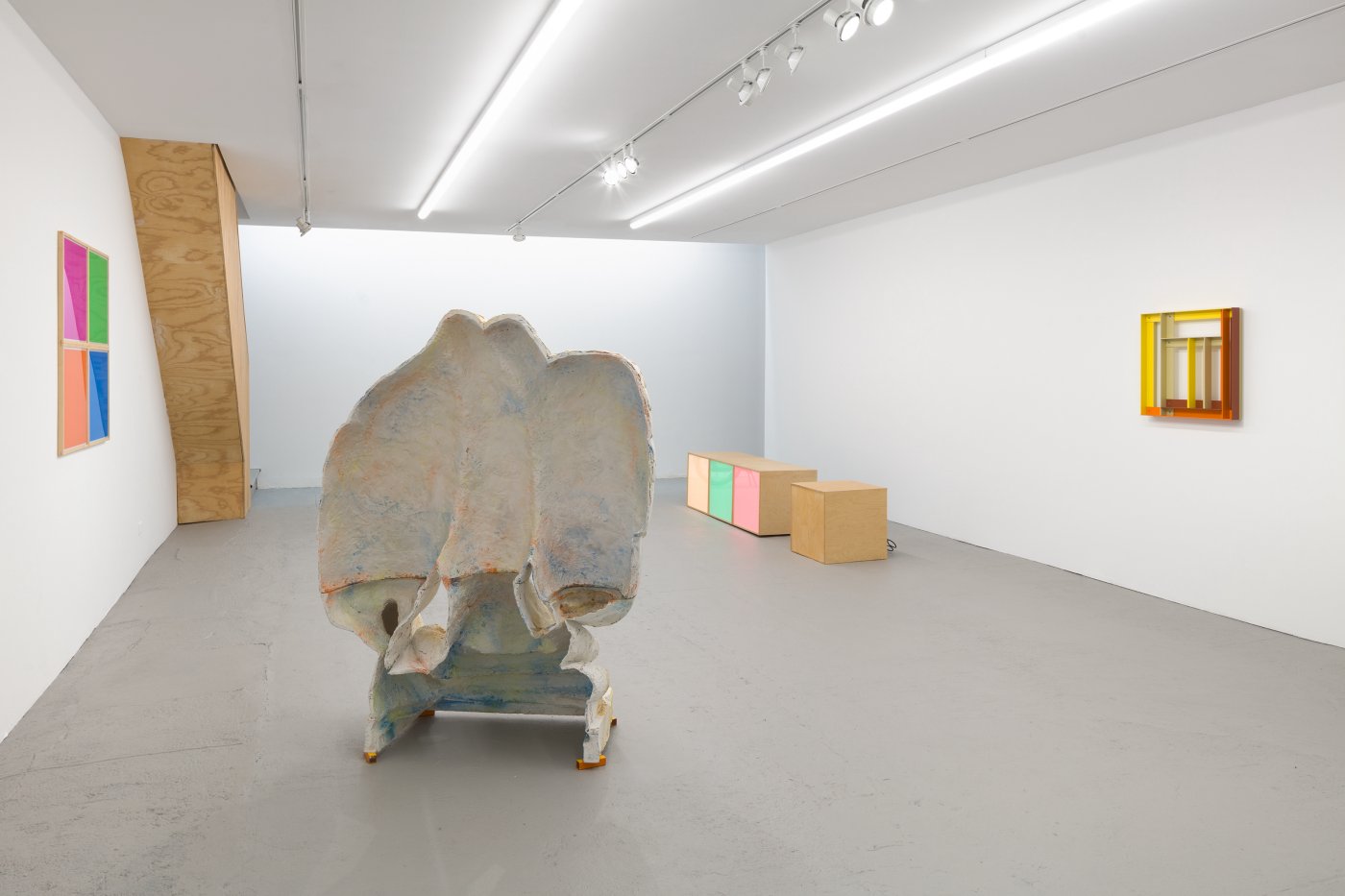 Looking back in time, sculpture in the late eighties and nineties meant everything but sculpture. Figures were rare and so were clear narratives. The nineties were the era between the Cold War and the Internet: Irony set the tone, codes and coolness of pop culture produced a sound that was brittle, conceptual and not easily accessible. The art of this time often looked like fashion, design, mass production or a service, and laid the foundation for a new kind of art that focused on installation and interaction. Instead of producing sculpturally shaped bodies, industrial, minimalist, and commercial- looking appearances dominated, relating to the space and the networks in which they were produced and exhibited. These works were undoubtedly characterized by the burgeoning interconnectedness and social libertarianism that was flourishing through music and art, across German techno, American house, and British rave culture, through ever- quickening modes of communication.

The light boxes by Angela Bulloch (born in 1966) that react to passers-by or the shelf-like architectures by Liam Gillick (born in 1964) that refer to frameworks of communication and exchange, for example, transport Minimal Art into the next millennium. Whereas Walead Beshty (born in 1976) is concerned with the materials and conditions of art production: studio, budget, materials, production, transport, exhibition sites and mediation form the framework for the perception and effect of the work.

At first glance, the works of Ugo Rondinone (born in 1964) also present themselves as evasively cool objects – yet his blind windows and colorful circles, his clowns and archaic stone figures create symbols of contemplation that, for all their slickness, breathe longing. Over the past 30 years, Ugo Rondinone has developed a distinct body of work: vibrant paintings, immersive installations, sculptures, and text-based works, all bound together by our collective experience of time, the cosmos, and other contemplative universal themes. In this poetic rumination, Rondinone reconciles the formal vocabulary of advertising and psychedelia with meditative, intimate reflections on nature and the human condition.

Doug Aitken’s (born 1968) work right on! explores the counterpoint between the analog and grassroots communication of the past in contrast to the digital era where images and information are flattened, accelerated, and move at light speed. The work glows from within, illuminating the timeless cover of a 1970 student protest pulp paperback, transforming it into a beacon of light and timeless information.

The mobiles of Martin Boyce (born 1967) are made of fragmented design classics, ornate ventilation grilles, doors with old wall-mounted phones and neon tube-trees. They revive the utopias of modernism and retrieve them within an elaborate system of value circulation: a romantic and at the same time conceptual quality that is also inherent in the filigree works of Eva Rothschild (born in 1971).

This preoccupation with abstraction that arises is in turn the driving force behind the wall reliefs of Wyatt Kahn (born in 1983). Using DIY materials, he builds objects somewhere between painting and sculpture that are based on a minimalist matrix. The dance-like movements in the compositions give rise to a geometric design with which Kahn comes surprisingly close to the spirit of the nineties – a quality that Oscar Tuazon’s (born in 1975) reduced-architectural wall works made of wood and synthetic resin also bear.

The use of modernist aesthetics in industrial production is a recurring topic in Valentin Carron’s work (born in 1977), who links traditional crafts with mass production, as it is for Matias Faldbakken (born in 1973), who robs metal cabinets, gas cans and car parts of their function or demolishes them so that they look like injured bodies. Mark Handforth (born in 1969) refers to urban space, reconstructing wastepaper baskets, streetlamps, and neon tubes in such a way that they contradict their real-life image in size or transposition.

The discrepancy between mass production and manual labor is the theme of Matthew Angelo Harrison (born in 1989). He appropriates found artefacts and encapsulates them in industrial resin used in the automobile industry. As such, Harrison’s works point to the brutality with which any industry passes over individual manufacture and cultural meaning.

The work of Justin Matherly (born in 1972) stands out for its figurativeness, reminiscent of ancient sculpture. His synthetic materials, however, are clearly of the present day – although they do not display the technical perfection that one usually assumes with such processing.