Lyndsey Ingram reopens her gallery with a show of new work by the British artist Sarah Graham. 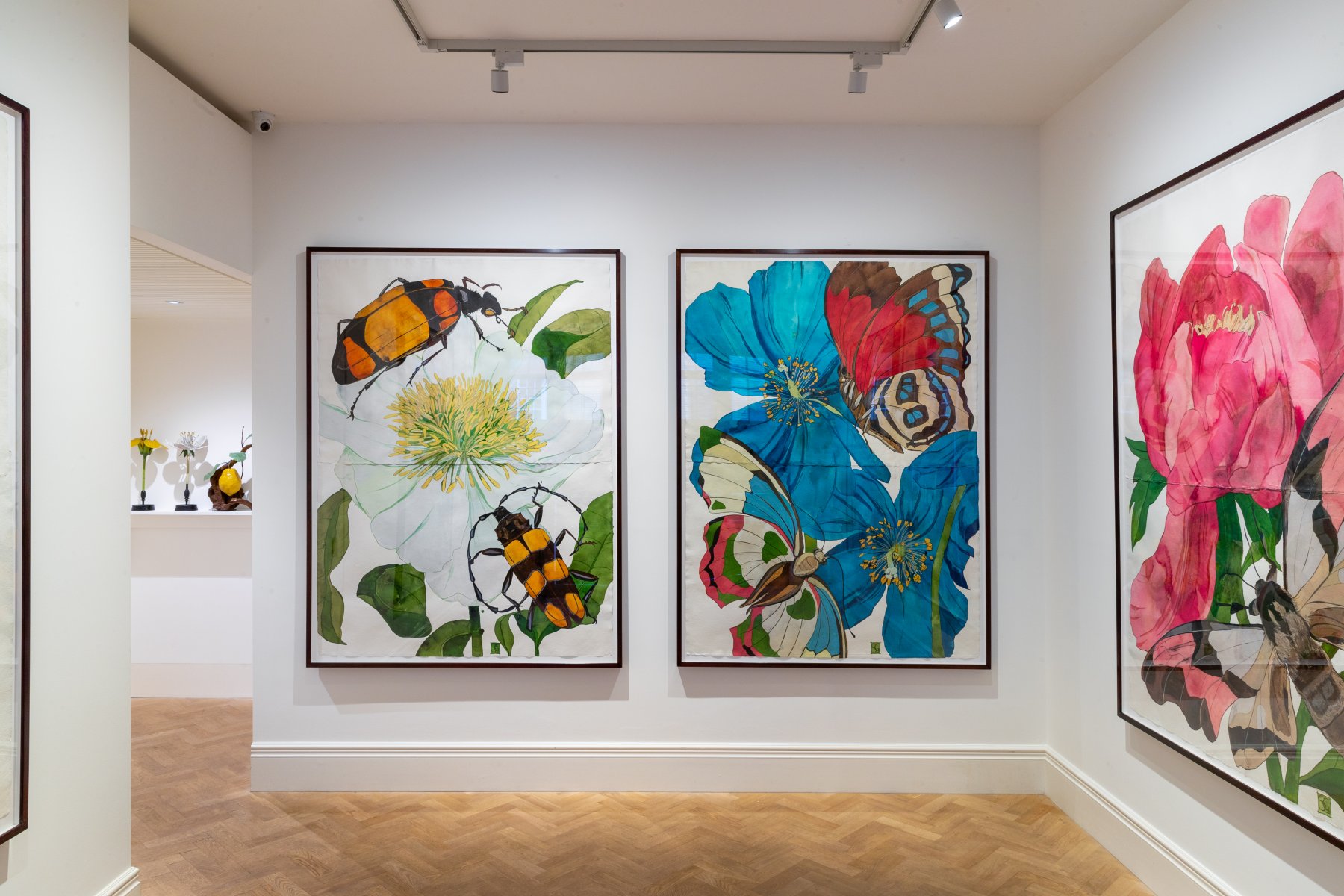 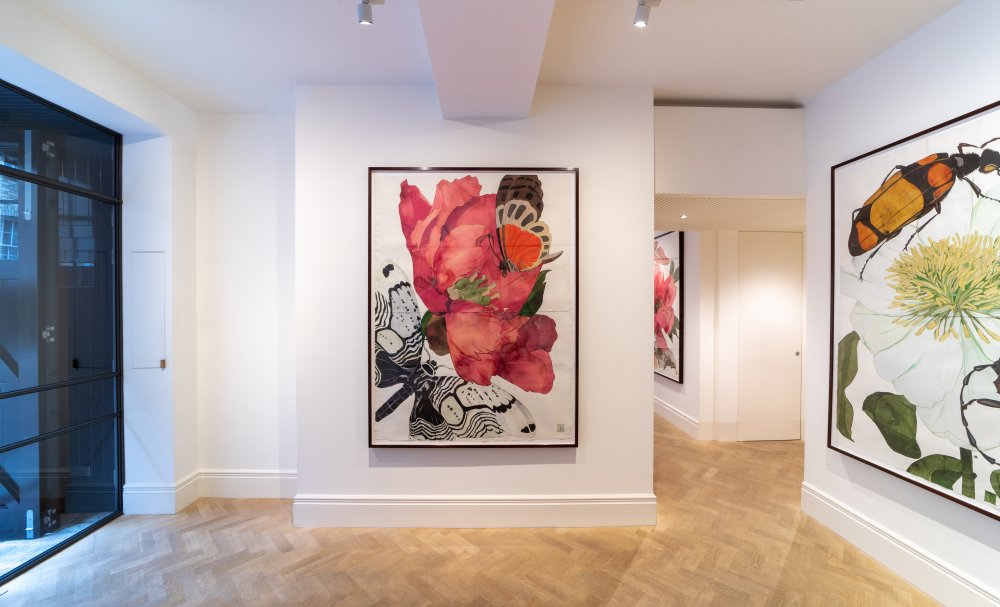 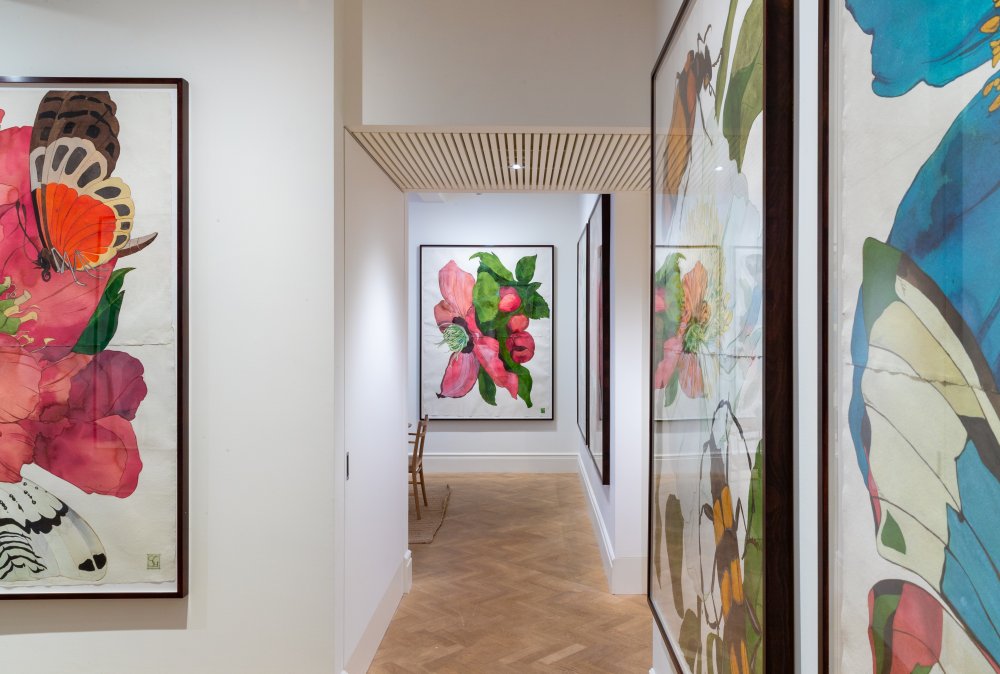 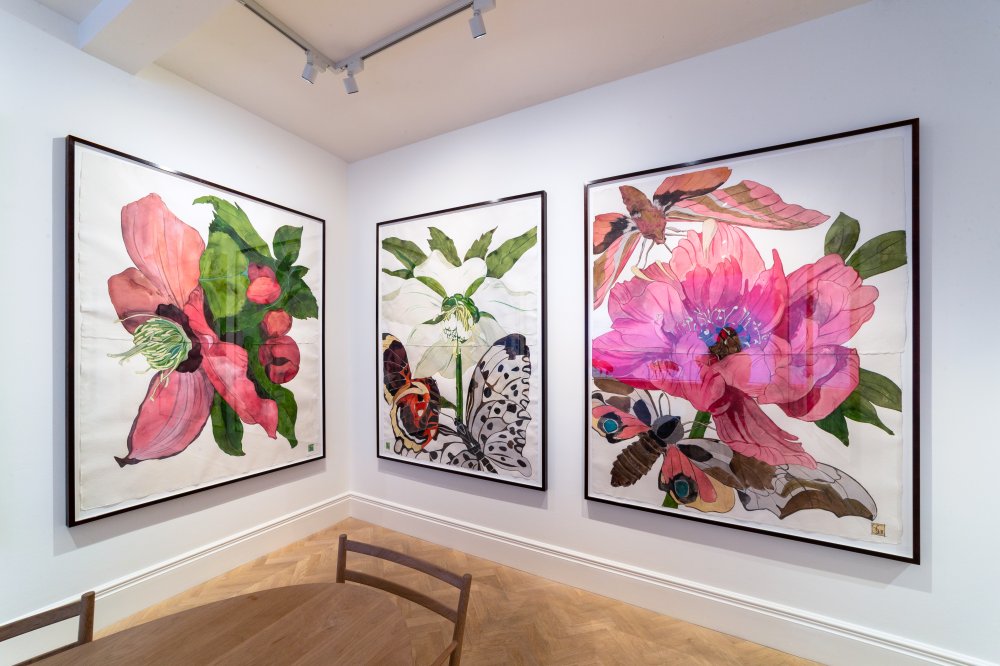 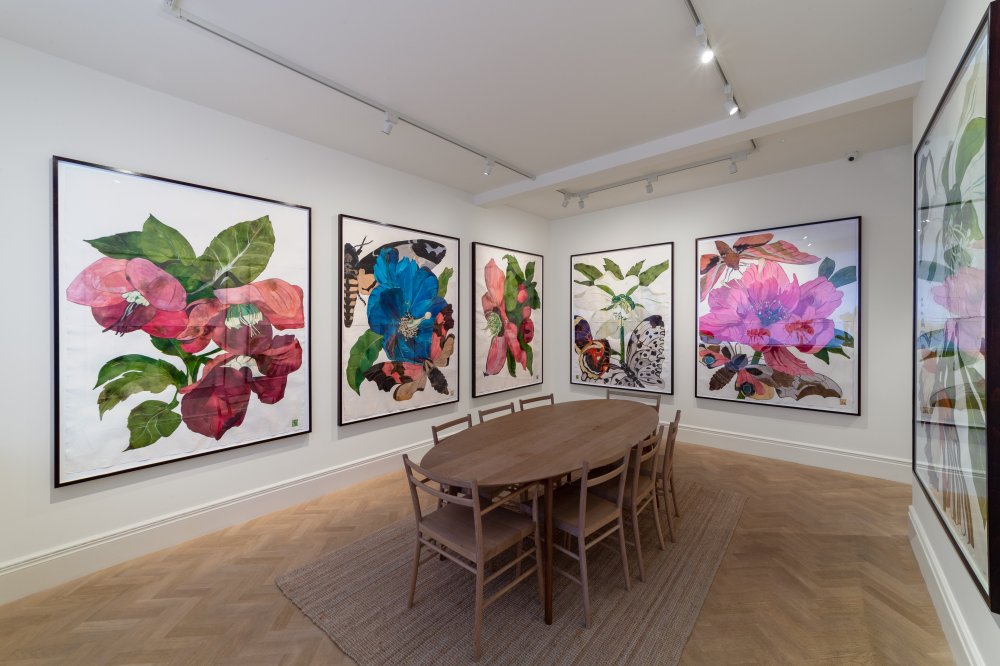 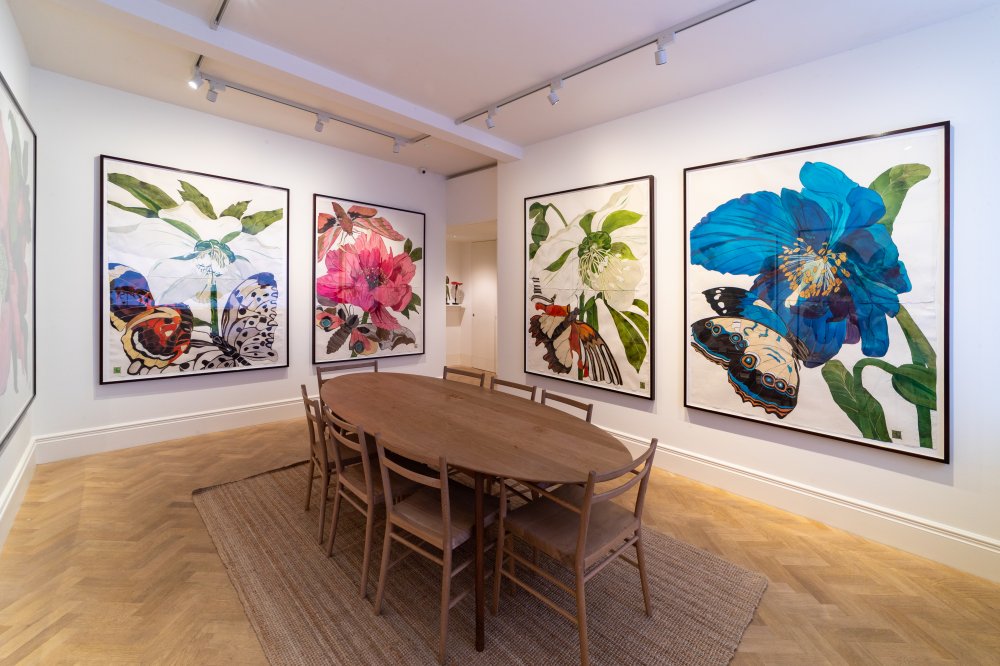 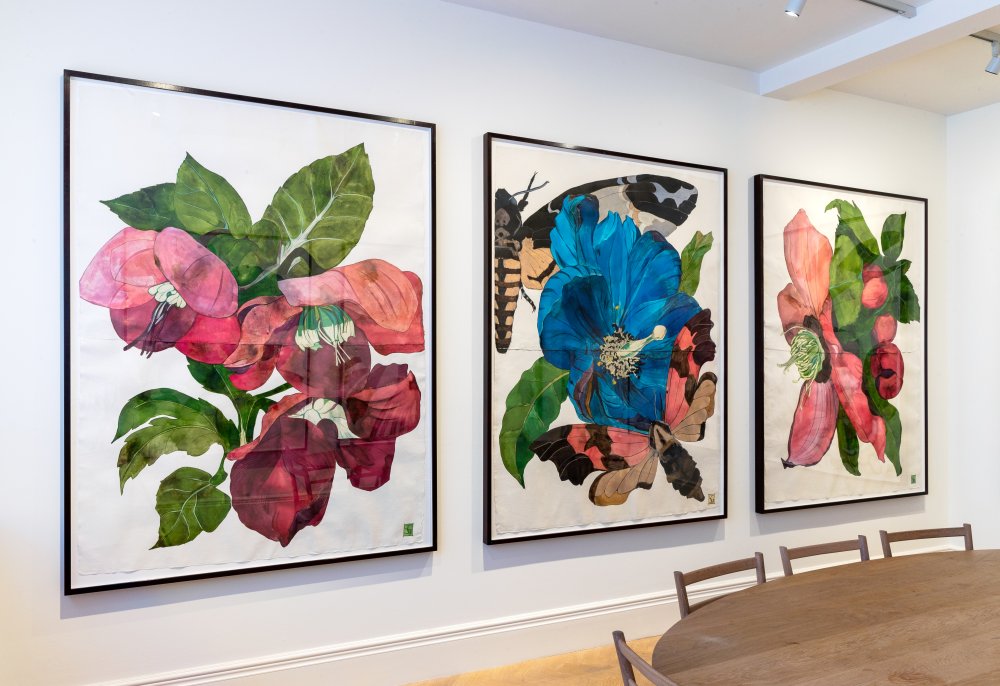 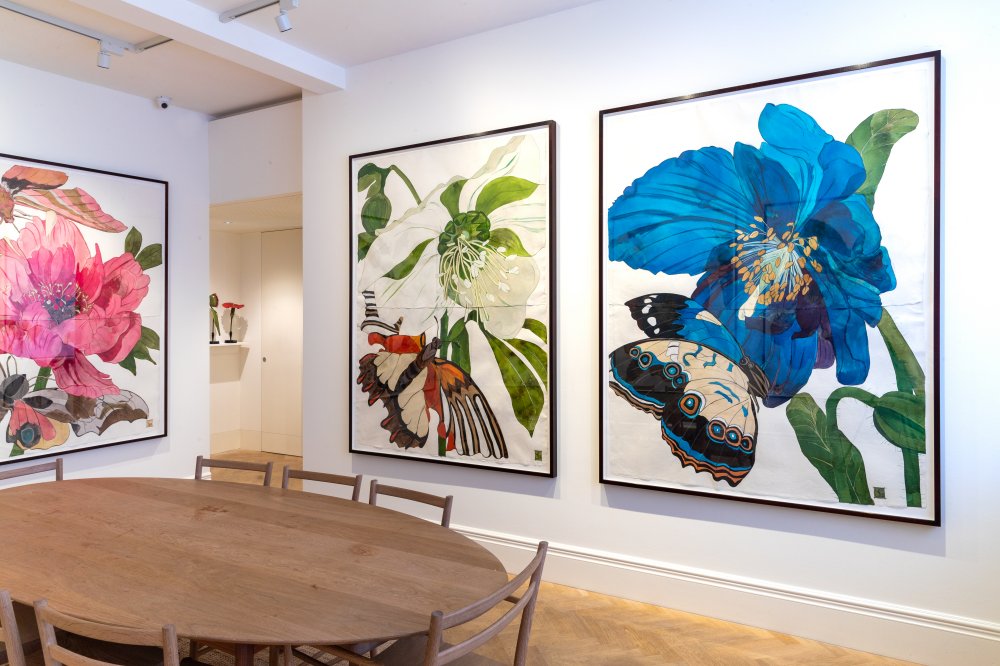 Known for her expressive, large-scale drawings of the natural world, the artist is presenting a new subject matter focused on the surreal juxtaposition of flowers and insects. She has drawn the flowers from life as much as possible and the insects from the National History Museum’s collection. All 17 works are ink on paper. Through the adverse circumstances of the last few months, observing spring at close quarters, Graham’s vision of the beauty and strangeness of nature may be particularly relevant to modern sensibilities. The show coincides with the publication of the first monograph on her work, written by Ruth Guilding, with photography by Miguel Flores-Vianna (Ridinghouse Publishers).

In Graham’s recent body of work, hellebores and peonies intertwine in an intimate dance with bees and butterflies, all painted in Graham’s characteristic large scale. Their magnification, combined with exquisite detail, transforms these drawings of flora and fauna into evocative images of a world often overlooked. Viewers are enveloped as they stand dwarfed by the beetles and blossoms so often trodden underfoot.

Despite her horticultural subjects, Graham insists she is not a botanical artist. For her, absolute accuracy holds little appeal: ‘Too much dedication to the original source deadens it for me,’ she says. Graham is not documenting nature but instead translating it into an expressive artistic language punctuated by calligraphic brush strokes of plant-based pigments. ‘I just want to draw and look; I‘m looking for an expression. I see a curve or a twist or a pronunciation of some form that I’ve somehow got to get into the studio and magnify.’

Everything about Graham’s work is based in nature, from the subject to the inks themselves: compounds of plant-based dyes and iron-based mineral pigments sourced from a family of artisan colour alchemists in Basel, Switzerland. She uses these because they produce livelier and more subtle tones than chemically derived colours. ‘I can’t paint in oils. My way of working is much more exact,’ says Graham, who applies the ink with animal hair Chinese calligraphy brushes onto paper she places on the floor to control the flow of the ink. ‘Ink is a merciless medium. It cannot be removed. It dries in pools, and so mistakes and variations become part of the work.’

Graham (b.1973) has been drawn to nature since childhood, when she roamed the French countryside in the summer holidays, and the Salisbury Plain at weekends, with her father, an ardent amateur naturalist. At 11, her mother showed her a magnolia and, enraptured by its sculptural petals, the young Graham drew her first flower for her mother as a gift. After degrees in art history and in fine art, she followed a circuitous route. Inspired by her heroine the explorer Freya Stark, she took a job as a photographer on a trek across the Silk Road on horseback, making a film that was purchased by the Discovery Channel. Then, closer to home, she worked in antiques and for landscape designers, before she rented a studio and began making black and white charcoal drawings of the flowers and plant life that had always called to her. She organized her first show of these at the Olympia art fair in 2007, decorating her stand with borrowed Regency furniture and floorboards to set it apart, and it sold out. Since then, she has devoted herself full-time to art and shown with Lyndsey Ingram in London and Galerie Maximillian in Aspen. Her work is represented in many collections in the US and the UK, including in the Dame Shirley Sherwood Gallery at Kew Gardens.

Among Graham’s many influences – from Renaissance drawings, to Baroque architecture, to early Freud drawings, to the Chelsea Flower Show – are the almost skeletal plant forms of Graham Sutherland. Graham owns one of the artist’s sketchbooks and first trained, like him, as a printmaker. ‘There is a strong printmaking ethos in my work because it’s all about laying down the mark.’

Graham’s work has always appealed to gallerist Lyndsey Ingram, who has represented Sarah Graham since 2008. ‘I continue to find something so powerful and compelling about her work,’ says Ingram, ‘because she has the ability to take small natural forms and turn them into something so colossal and human, creating beautifully balanced but also such personal compositions, with so much of the artist subtly but constantly present. It is a great privilege to be showing her work for the second time in our Bourdon Street Gallery. We will launch her first monograph here later in the year when circumstances permit.’

In view of the fact that some viewers may not be able to visit the gallery in person due to the Covid-19 pandemic, the show will also include an online viewing room and video content.

Courtesy of the artist and Lyndsey Ingram, London