Capitain Petzel presents Center, an exhibition of paintings by Sanya Kantarovsky, made in 2021 and the first third of 2022. 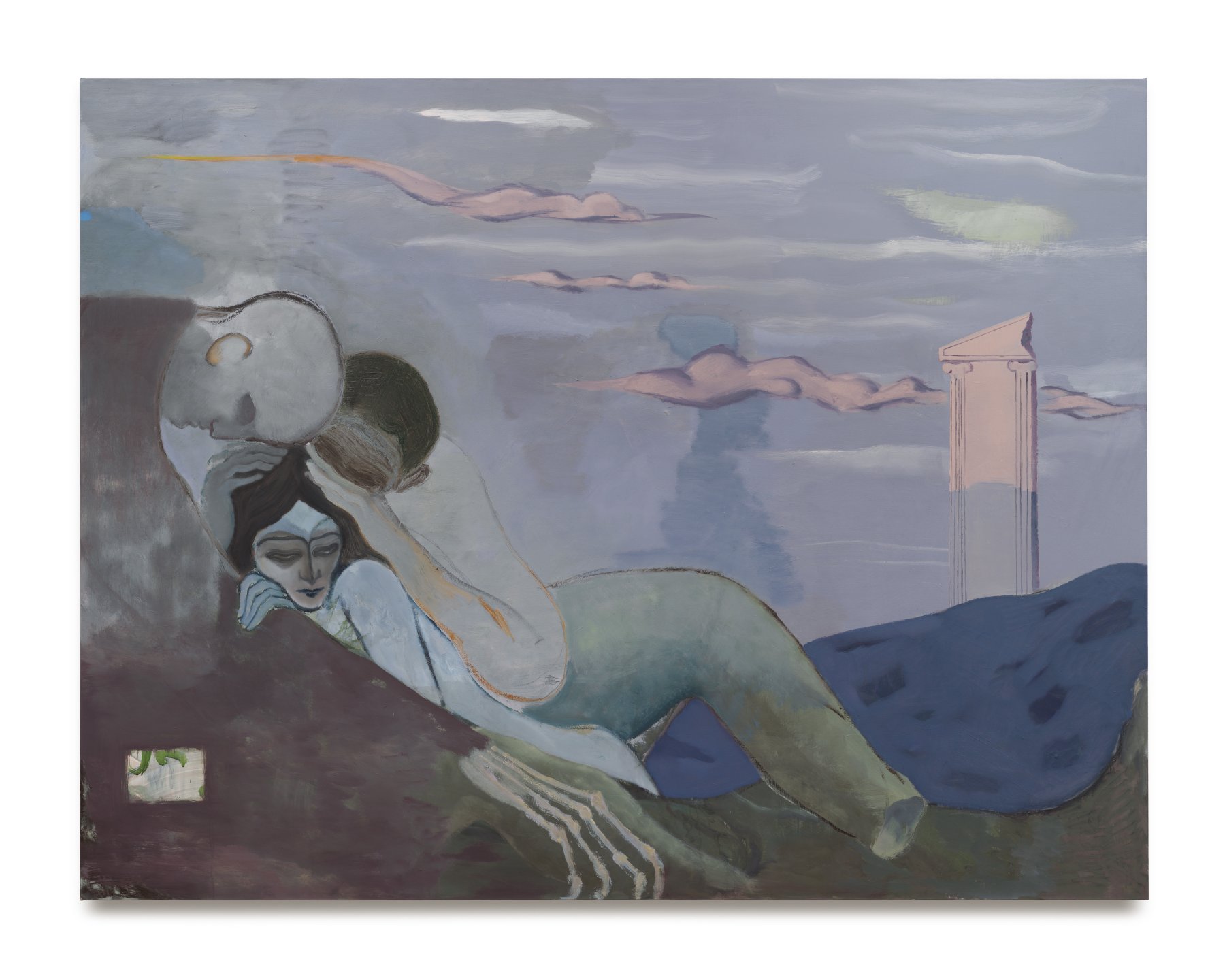 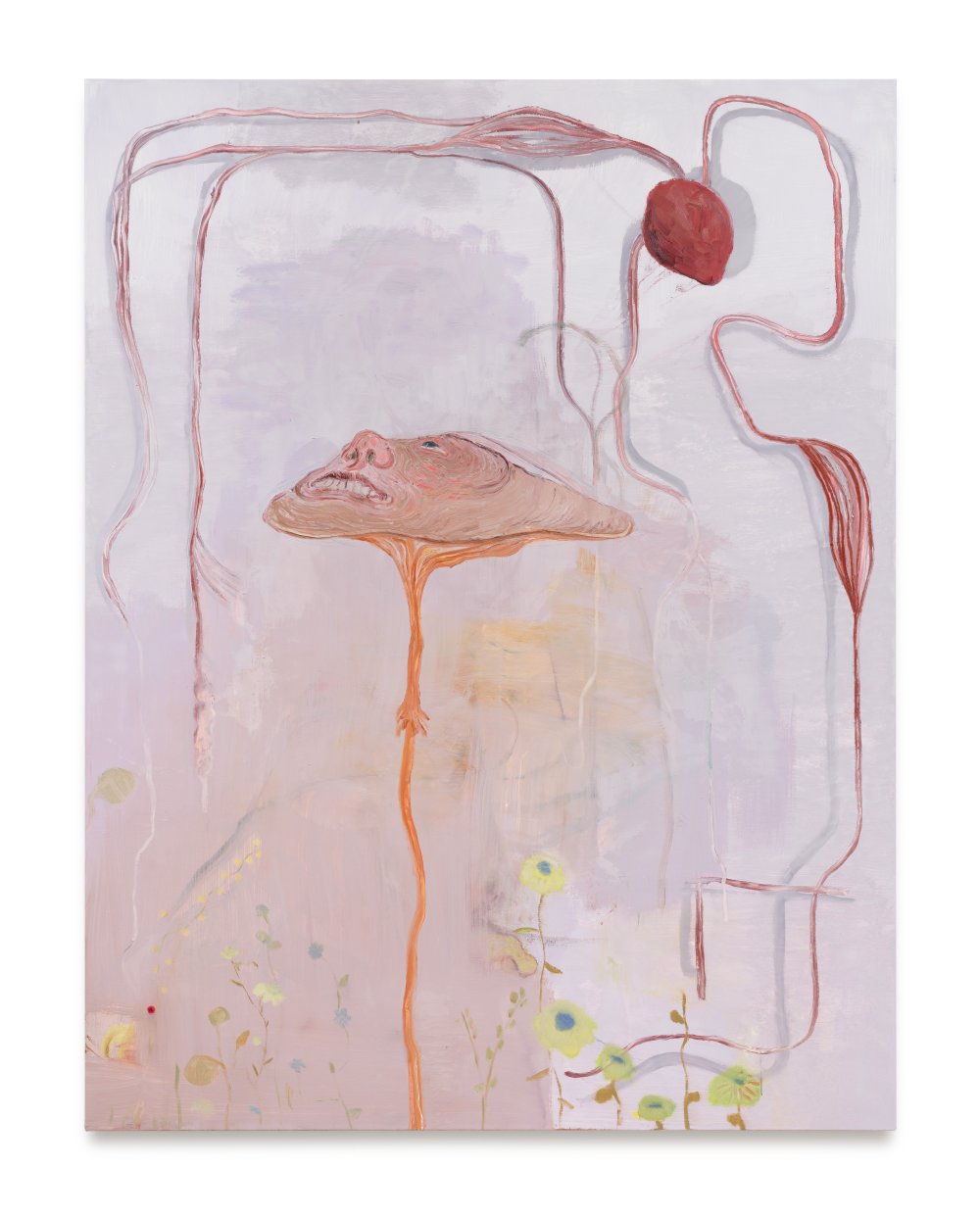 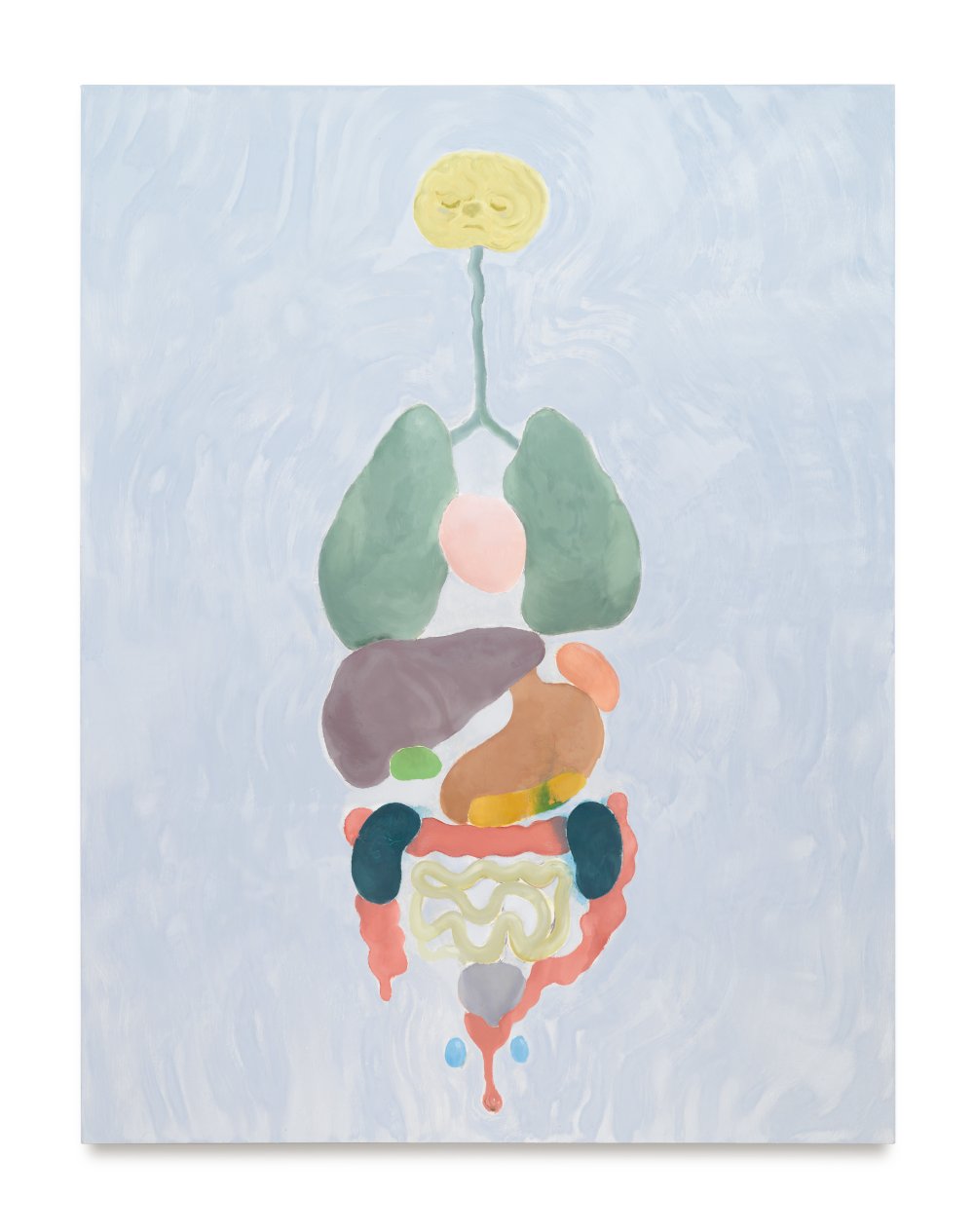 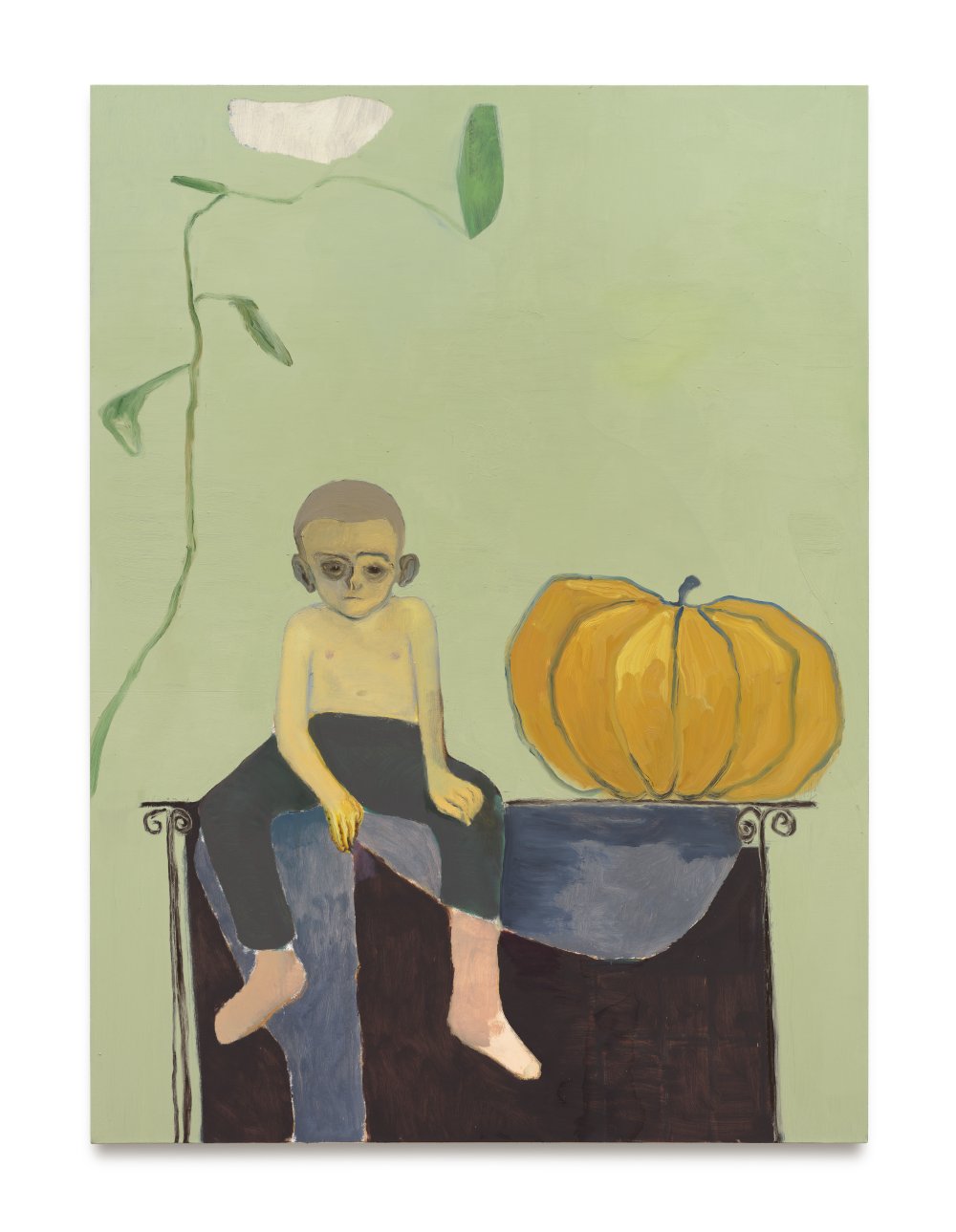 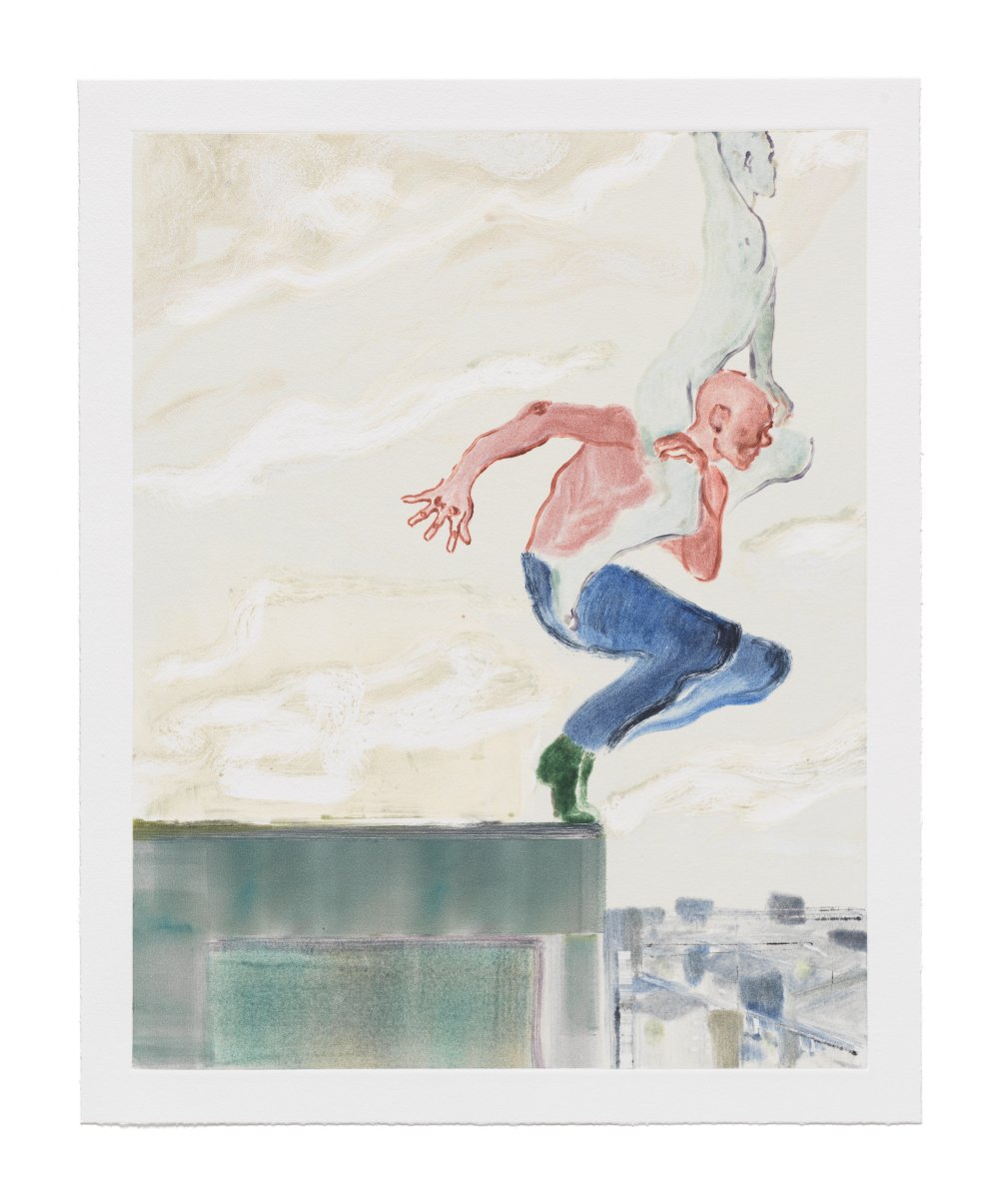 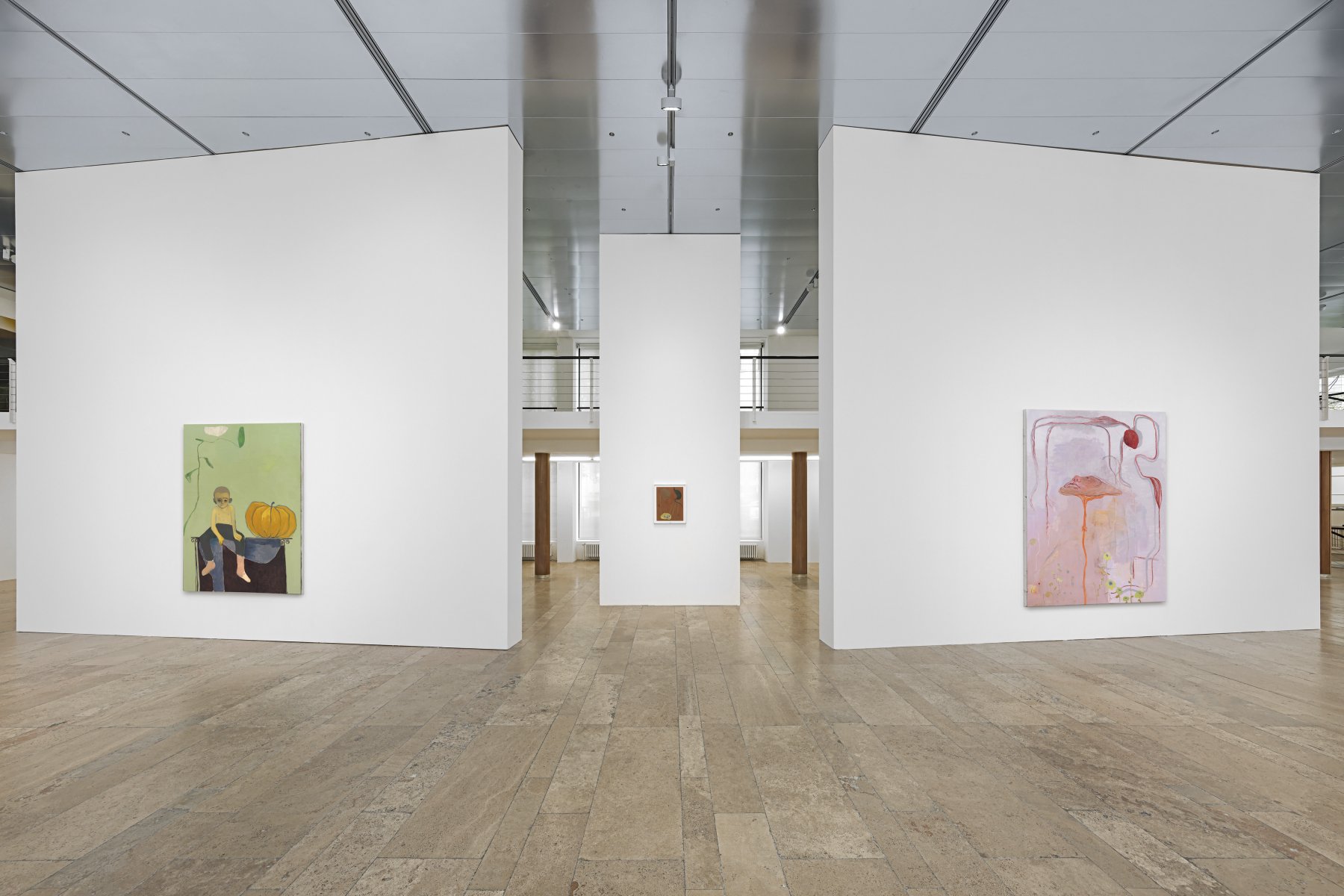 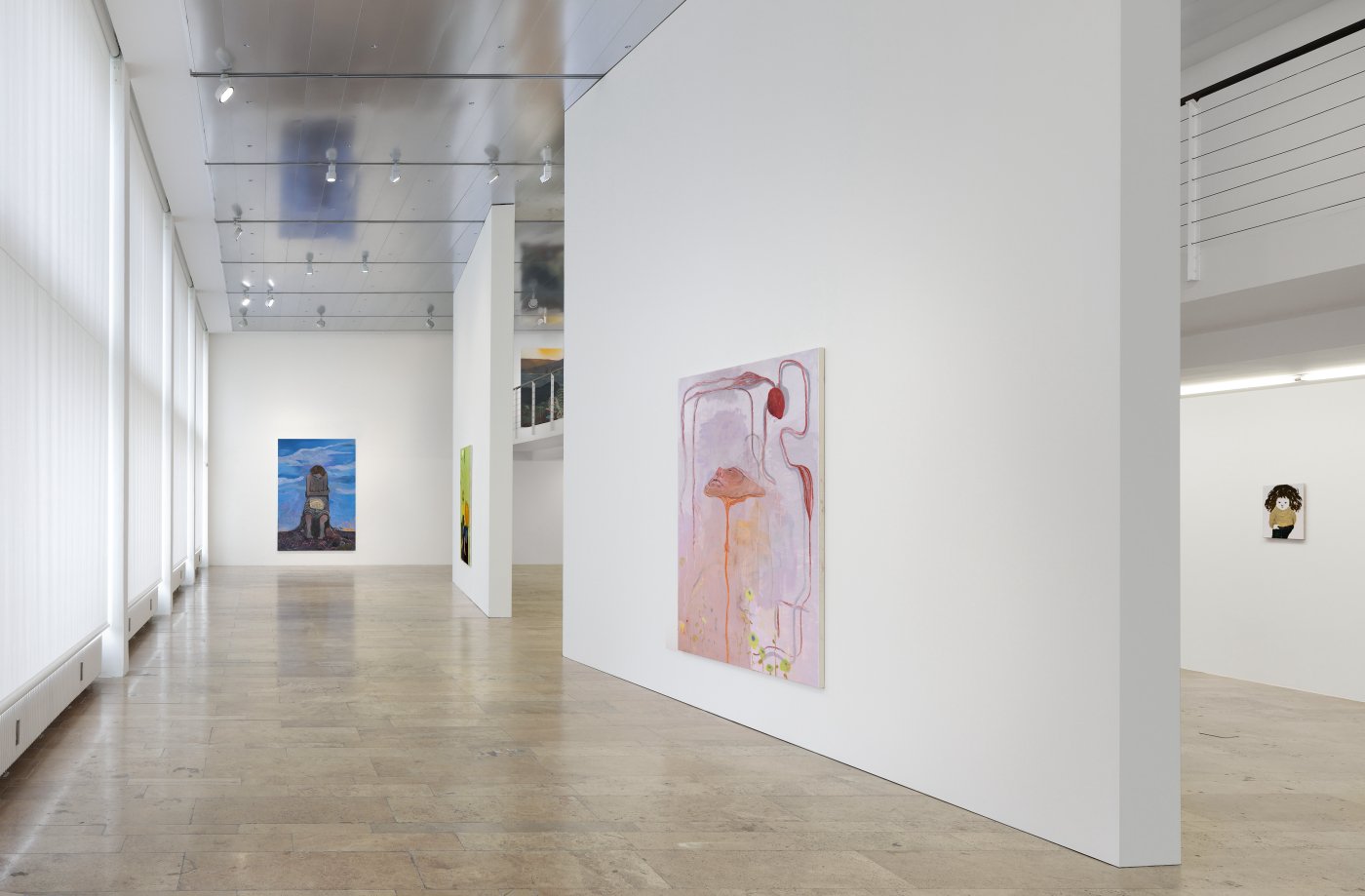 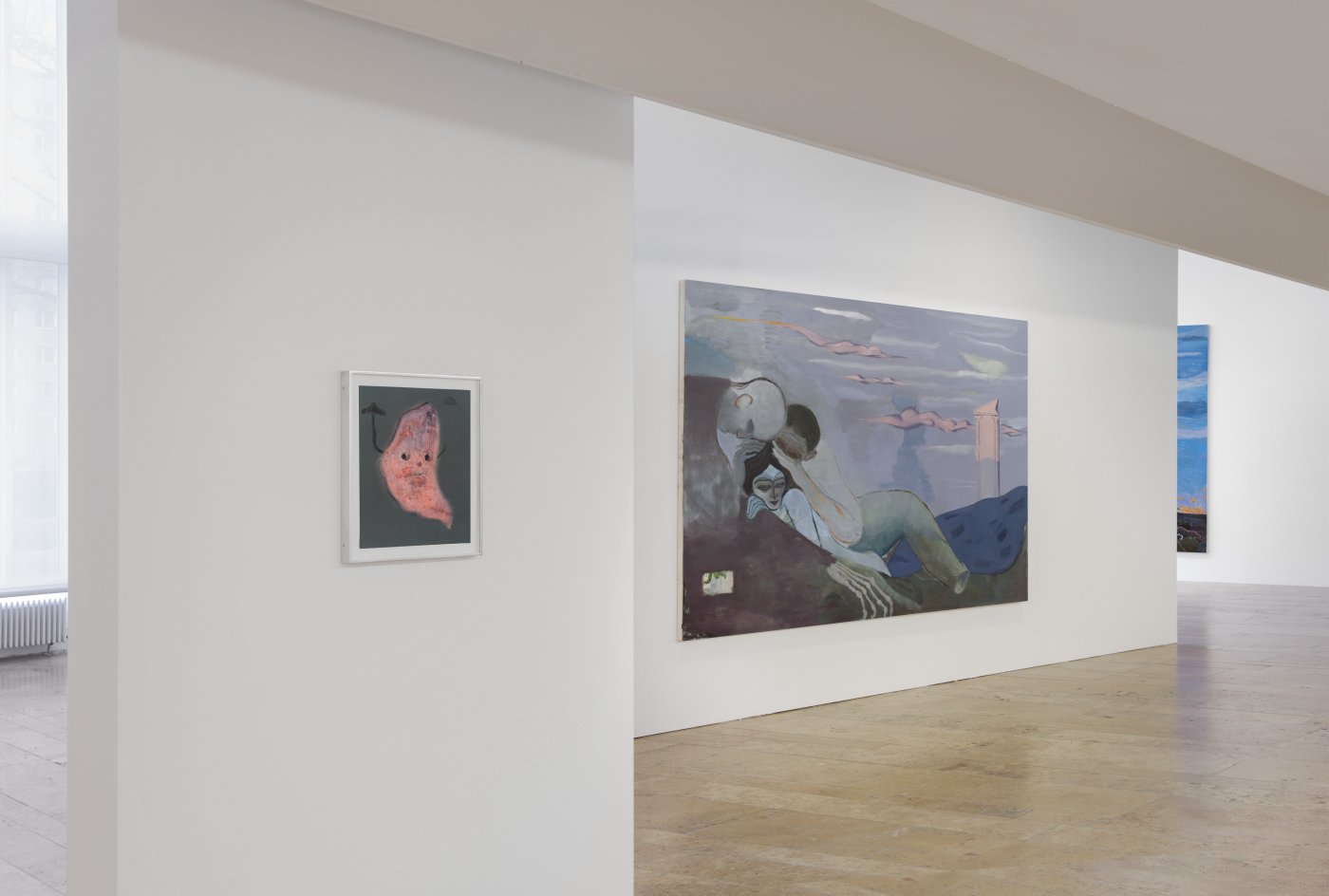 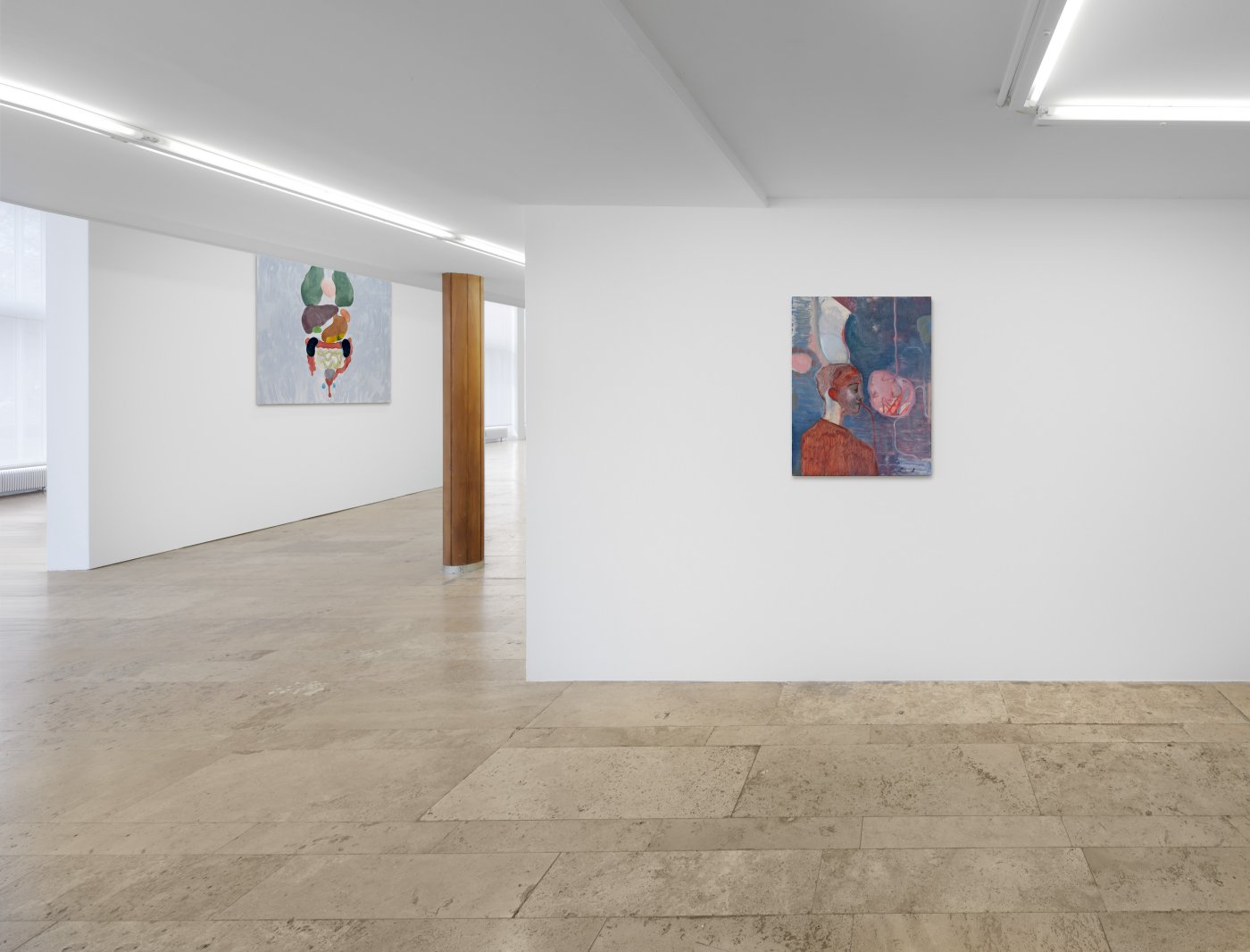 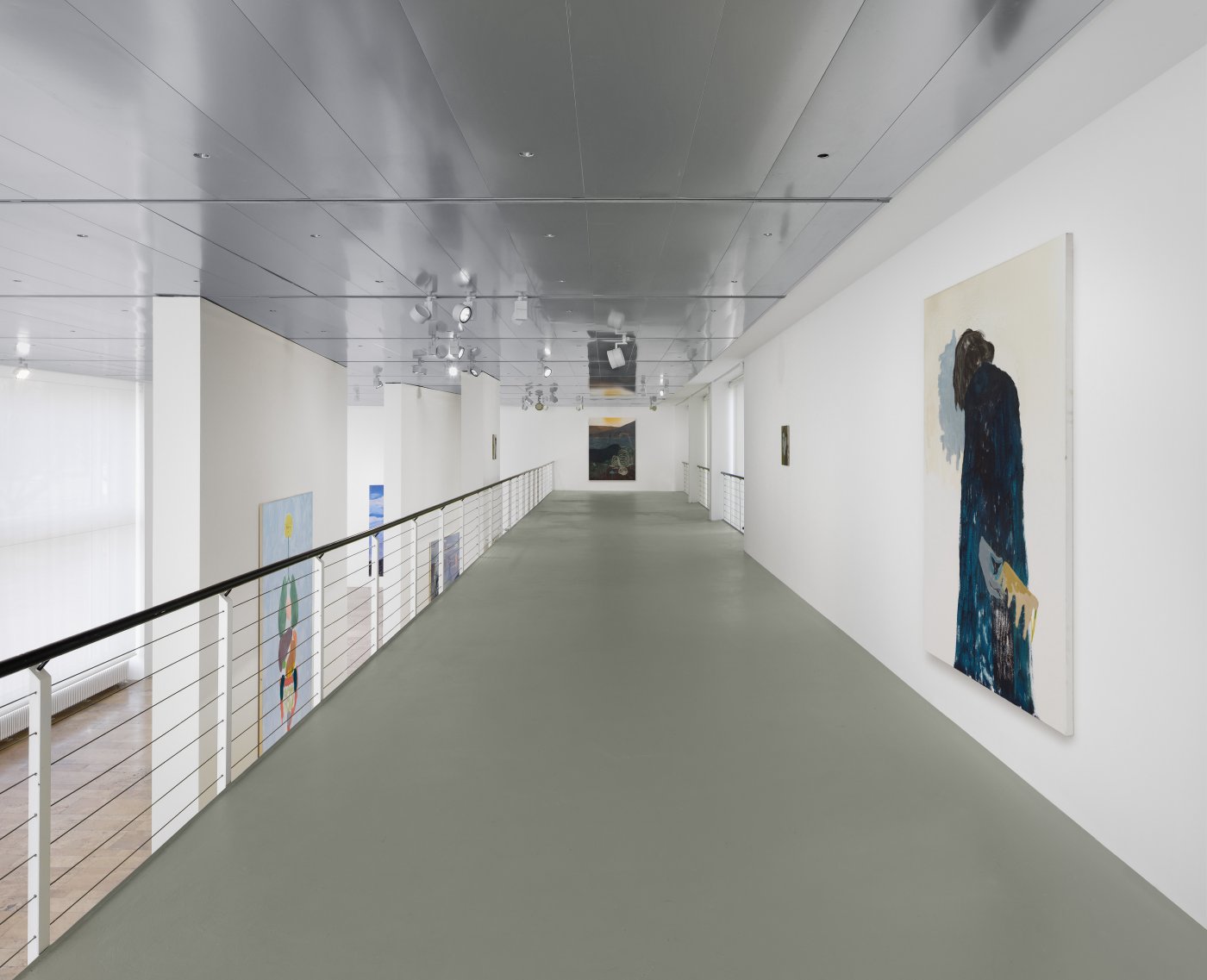 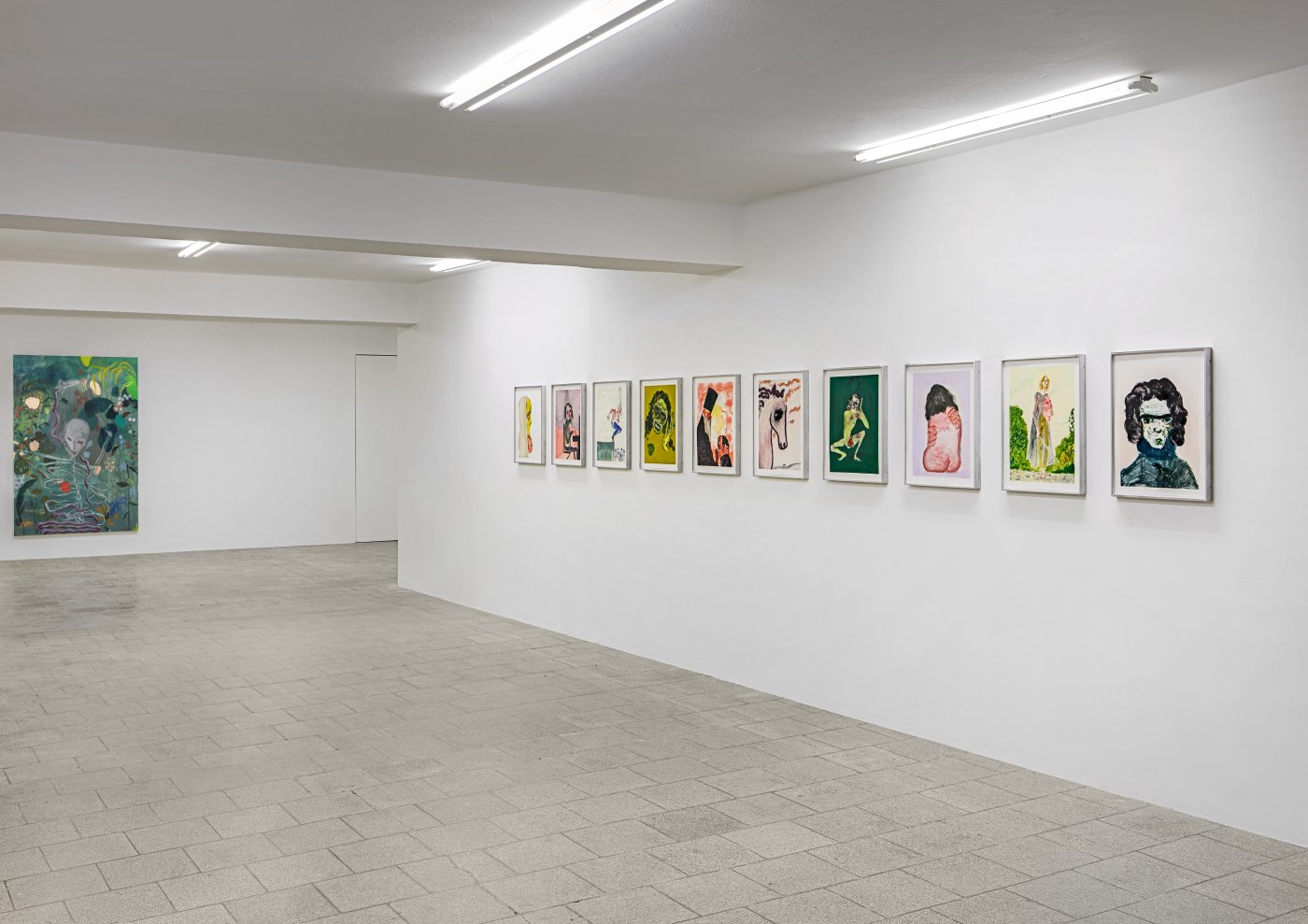 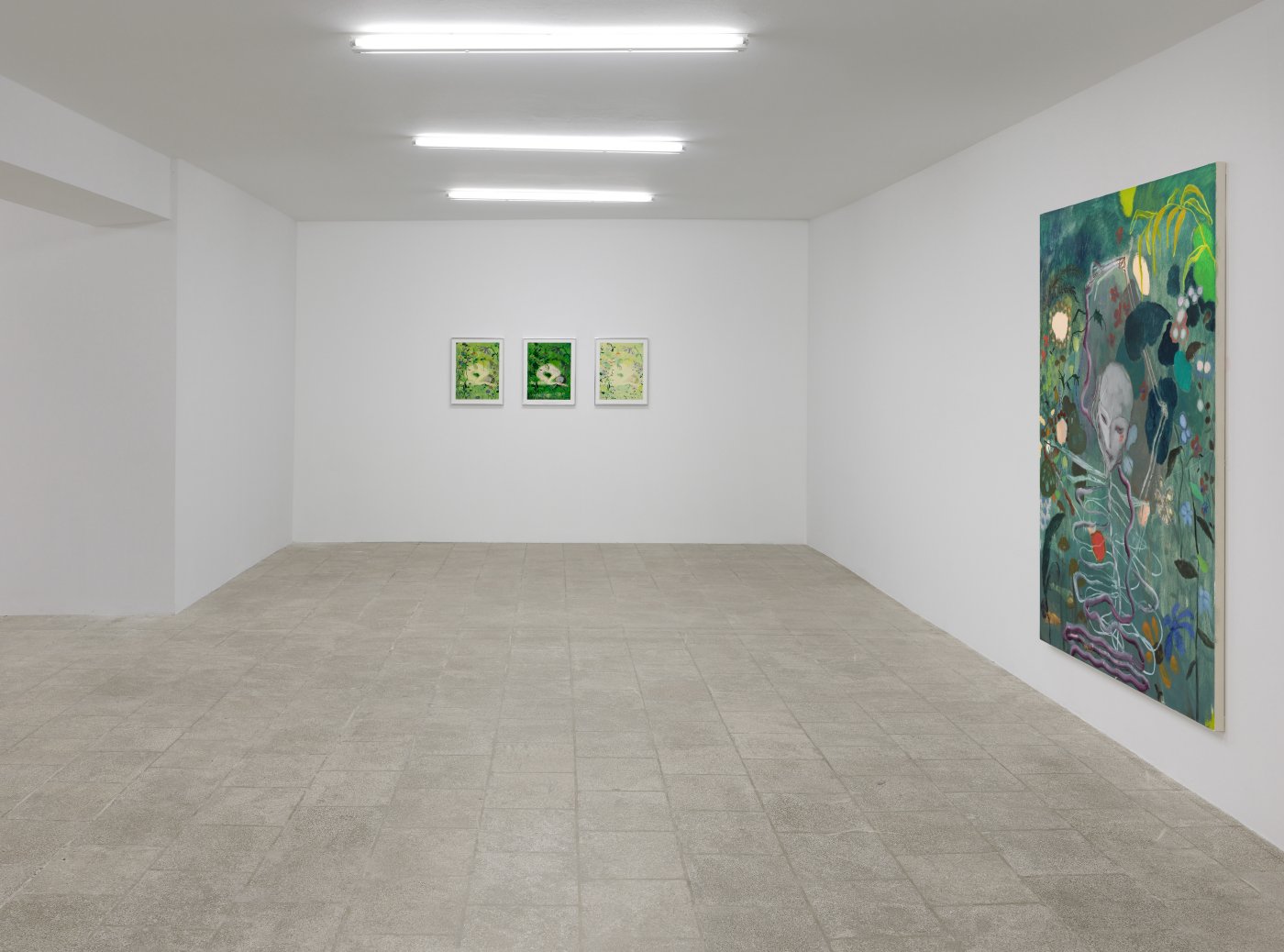 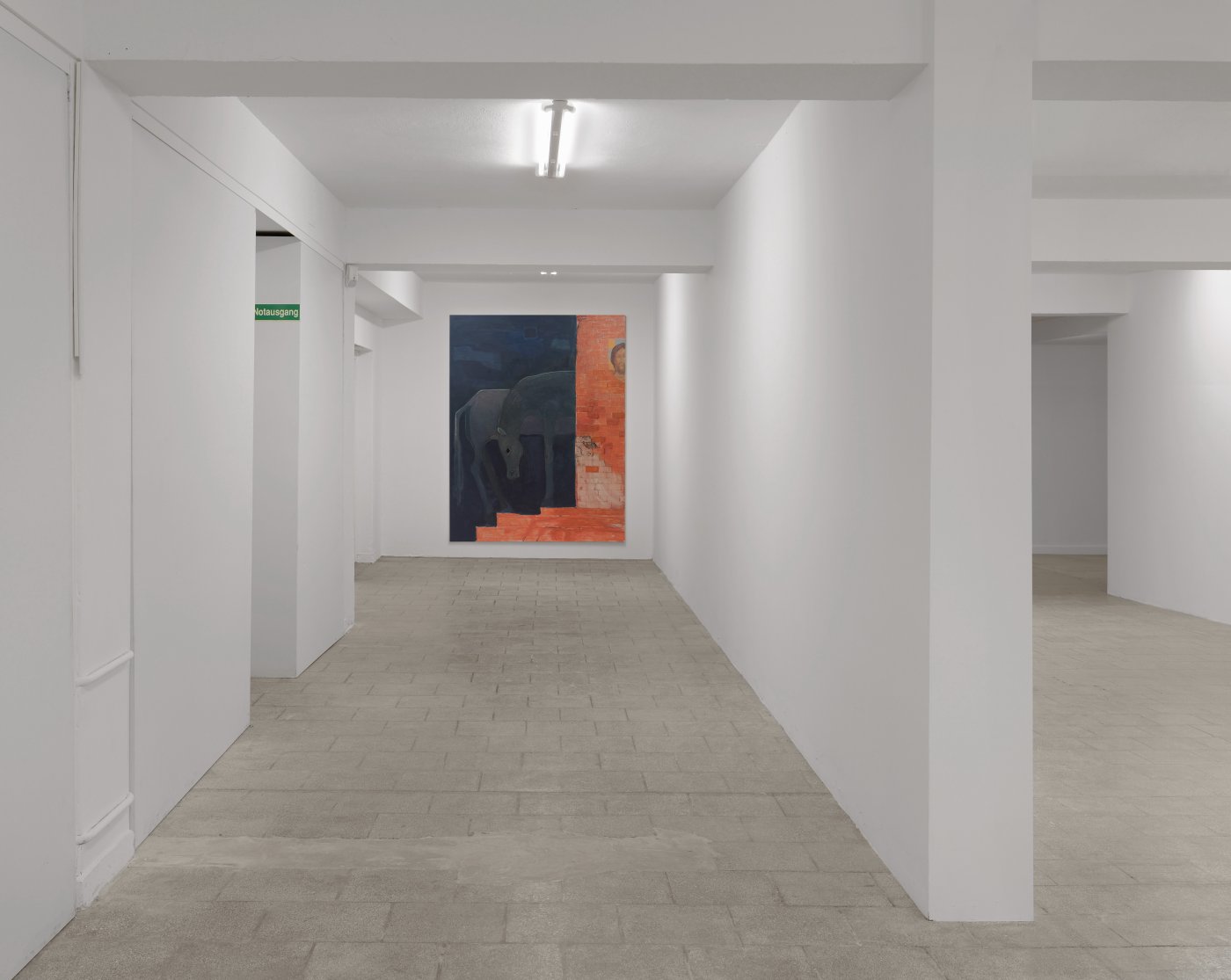 Responding directly to the Soviet era modernist architecture of Kunst im Heim, Karl-Marx-Allee 45, Kantarovsky alters the space with a symmetrical arrangement of walls that evoke both religious architecture and anatomical symmetry.

This intervention sets the stage for motifs of anatomy, biology and spirituality that recur throughout the paintings. The title work, Center, presents a human organ system floating in space. The brain, perched on top of the esophagus, has a face with a look of concentration. Invoking the Qigong practice of visualizing one’s organs smiling, this brain seems able only to manifest his own belabored expression.

In Wordly Concerns (Milarepa), the Tibetan saint and murderer who attained redemption through Buddhist practice is pictured in his typical repose, with his right hand pressed against his ear, listening to the universe. In contrast, Lear presents the Shakespearean antihero, a victim of the ego, in a state of disconnection, with his crown slipping from his hidden hand. Growth presents a humanoid mushroom stretching enthusiastically upwards, set against a backdrop of meandering capillaries, veins and bowels – the hidden apparatus of life.

In Return a female figure gazes at an organ system that appears to have slithered into her lap, evoking images of the prodigal son’s return to the father. Throughout the paintings, figures in various states of decomposition and / or regeneration appear to dissolve into space and material, their corporeality bearing a spectral, impermanent quality. Art historical precedents reverberate throughout the surfaces, such as De Chirico’s late classicism in Spirits, or Van Gogh’s saturated impasto in Pumpkin.

Housed in the souterrain is a presentation of monotype prints created with the artist‘s long-time print-making collaborator Marina Ancona at 10 Grand Press. These prints lay bare the process of conjuring images through the re-working of “ghosts” – building on the residue of previously painted images on the plate. Functioning as both preliminary ideas and reflections on the paintings in the exhibition, the prints offer a different register of seeing, hinging on the indexical slippage between paper and acrylic glass.

The viewer is invited into a synesthesia in which the realms of experience, thought, form and materiality are violated, overlapped and disordered. The notion of self is fragmented in both object and image. Locating one’s center, the commonly proclaimed goal of Western contemporary wellness and self-help literature, is demonstratively absent. There is no center.

Artist’s Note:
This group of paintings emerged out of my recent preoccupation with impermanence and the shared human drive to avoid it. The paintings in this exhibition reflect on death and our persistent reminder of it – the body. The invasion of Ukraine by Russia, my country of birth, on February 24th, pushed the work into an uneasy, coincidental alignment with a real-time catastrophic tragedy. I bear witness to this criminal fratricide, perpetrated by a source of power defined by its contempt for human life, with the thinking, feeling human body forever in its crosshairs. The yoke of this power has always been the curse of my country of birth. Filled with a deep ancestral grief and a sense of civic responsibility, I stand in solidarity with Ukraine.

In a recent conversation, a friend reminded me of a quote by Philip Guston: “When the 1960s came along, I was feeling split, schizophrenic. The war, what was happening in America, the brutality of the world. What kind of man am I, sitting at home, reading magazines, going into a frustrated fury about everything – and then going into my studio to adjust a red to a blue.”

I found myself in a similar state. While acknowledging the inevitable dimension of painting as simply “adjusting” materials, I was still left with it as my primary way of processing. As I worked on finishing the paintings in the studio, I made three more – Return, Completely Blind Red Wall (After Akhmatova) and Growth.