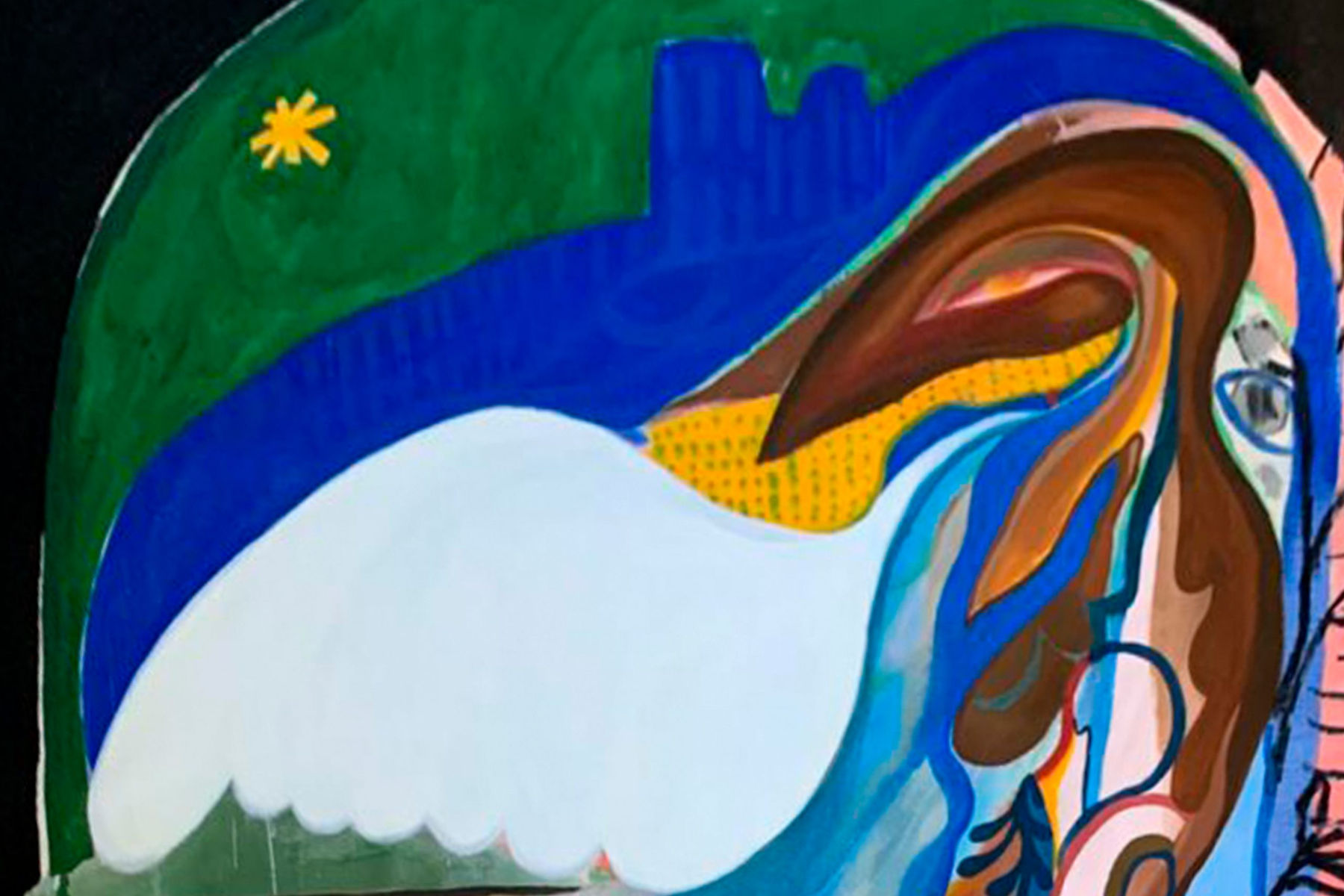 Twenty-two year old Samuel de Saboia confronts the spectator with his reflections on social aesthetics, self-acceptance, sexuality, life and death, angels and demons. However two contrasting sentiments recur like a leitmotiv across his output: the notion of pleasure versus pain both aesthetic and personal. In his paintings on canvas or leather, sculptures and air-dry clay ceramics in his exhibition brought to Zürich by Kogan Amaro Gallery, pleasure and pain pulsate. They are present in his different bodies of work that also includes performance, photography, fashion and anything else that excites the free-flowing imagination of this angel-like, sensuous cinnamon-colored skin queer young man born to a modest family in the violent neighborhood of Totó (where five close friends of his were murdered) in northeastern Recife, bathed by turquoise Atlantic waters.

De Saboia’s vigorous, layered brushstrokes campaigns for social change: “I feel that as a black queer body, I am already the political message. My pieces are instruments of an orchestra. They ask, they talk, they are my way of paving the way for others”. The paintings overlap themes, blur lines and investigate divergent elements while exposing his innate nonconformity in issues of black beauty and androgyny to the abuse he suffered as a child. His art also discloses his personal feelings towards displacement, belonging and immigration both as a striving artist and as an Afro-Brazilian crossing borders, along with his uneasiness with those empowered by the state, to put it simply: cops.

This Instagram star with over 42,000 followers (@samueldesaboia) has been featured in several magazines such as the Brazilian editions of Vogue and Harper’s Bazaar, as well as in young trendy American websites such as Flaunt, V Magazine, Fucking Young!, AfroPunk and in the August 28, 2019 issue of the New York Times in the feature “A New Brazilian Magazine Is a Fantasy for Dark Days” on the Brazilian queer community.

The artist cooks an intimate socio-political cauldron with the ingredients of his broad interests that goes from opera to pop music, high to low fashion, Georgia O’Keefe to Ana Mendieta, Raul Seixas to Tupac Shakur, Tropicália to Leonilson, Baroque to Brasilia, Maracatú to Forró… His cross-cultural art aims at building loving bridges in borderless landscapes rich in diversity and intersections to stimulate flexible dialogues among people no matter what skin color gender, age or social class. “I want to reach the masses and convert them to poets. I want to meet my heroines and heroes and transform them into friends; I want to shape my reality more than being shaped by it, but I want to stay true to who I am,” reveals the multi-talented artist with a solar personality.

Recife-born, São Paulo-based artist, Samuel de Saboia, comes from the poor and violent Totó neighborhood of the capital of Pernambuco state. A child prodigy, he painted his first work when he was only two. By the time he was twelve years old he was sure his calling was in the art world and discovered that by working in online projects he was able to hide his young age and sell his works. It was written he would cross borders in the near future when his first online sell was to a client in New York. Three years later his career took off in a collective exhibition at the Casarão venue in downtown Recife. With the money from the online business, he moved to São Paulo. Since then he has held several exhibitions around the world, among them Centro Cultural São Paulo (CCSP), 2017; Space 776, New York City, 2018; and Kogan Amaro Gallery, São Paulo, 2019. His first U.S. solo exhibition was held in 2019 at the Ghost Gallery in New York, following to Los Angeles as the opening show at the gallery’s L.A. branch. In September 2019 the artist had his first individual museum show at Fundação Marcos Amaro / FAMA, in Itú, São Paulo state, Brazil.