Autobiografia del rosso (Autobiography of Red) is the title of the new exhibition by Sabrina Mezzaqui that Galleria Continua presents in its San Gimignano exhibition spaces. 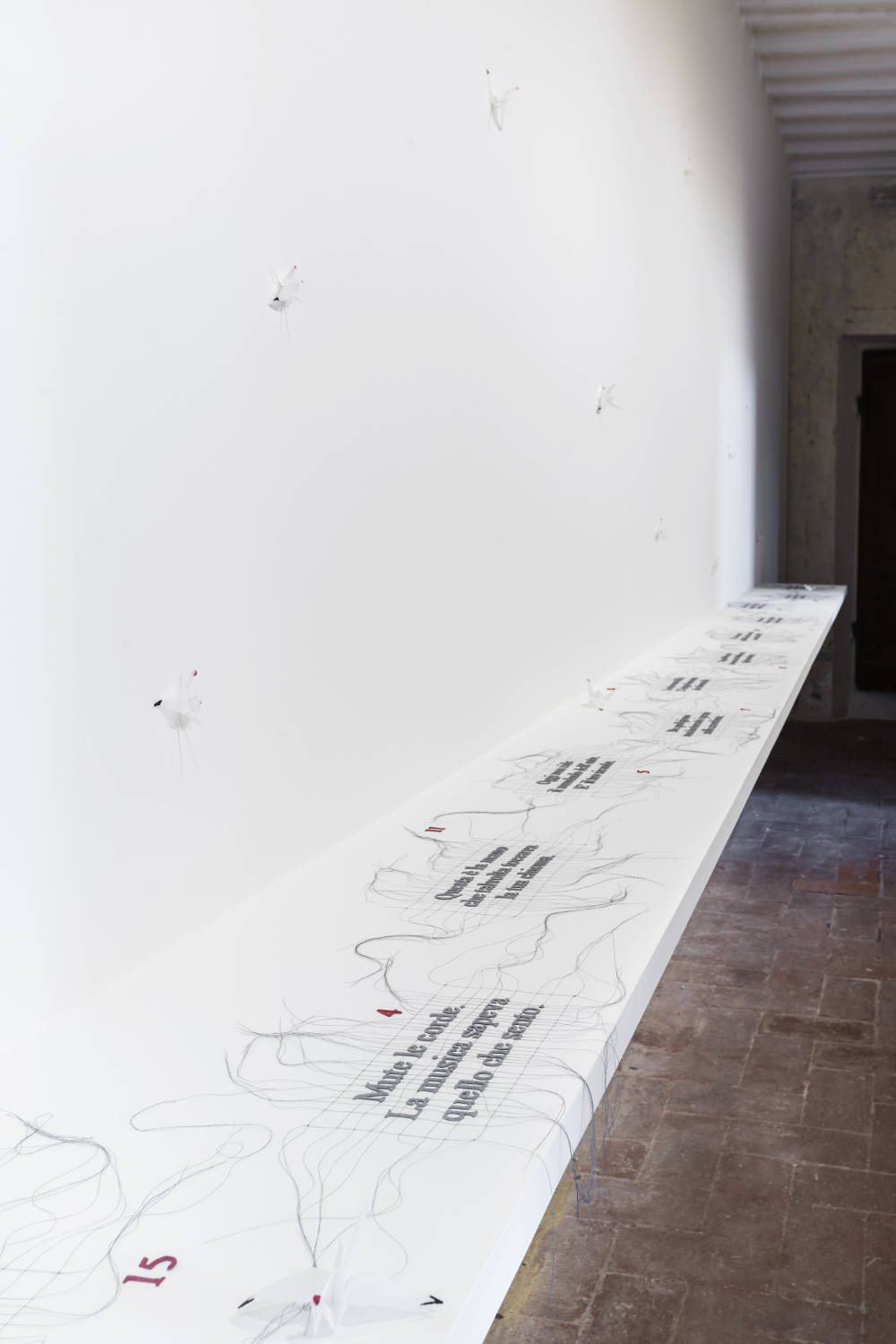 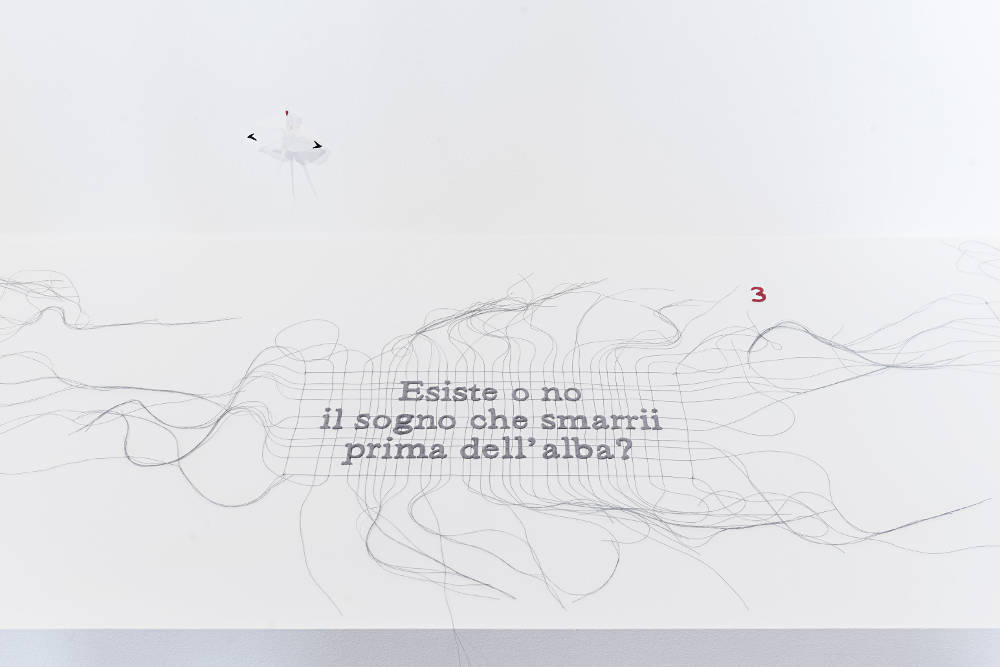 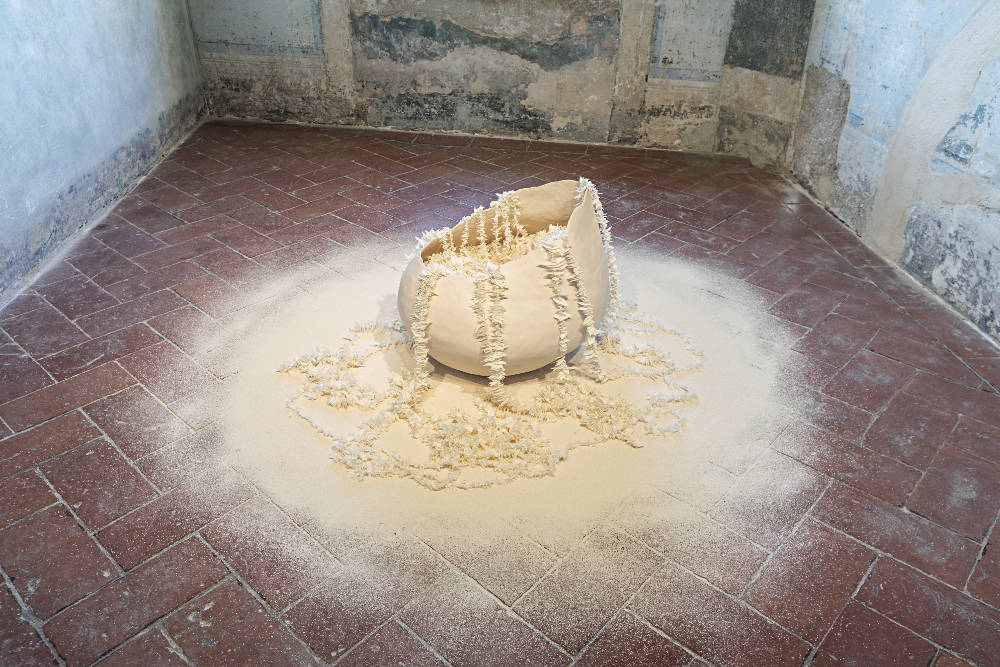 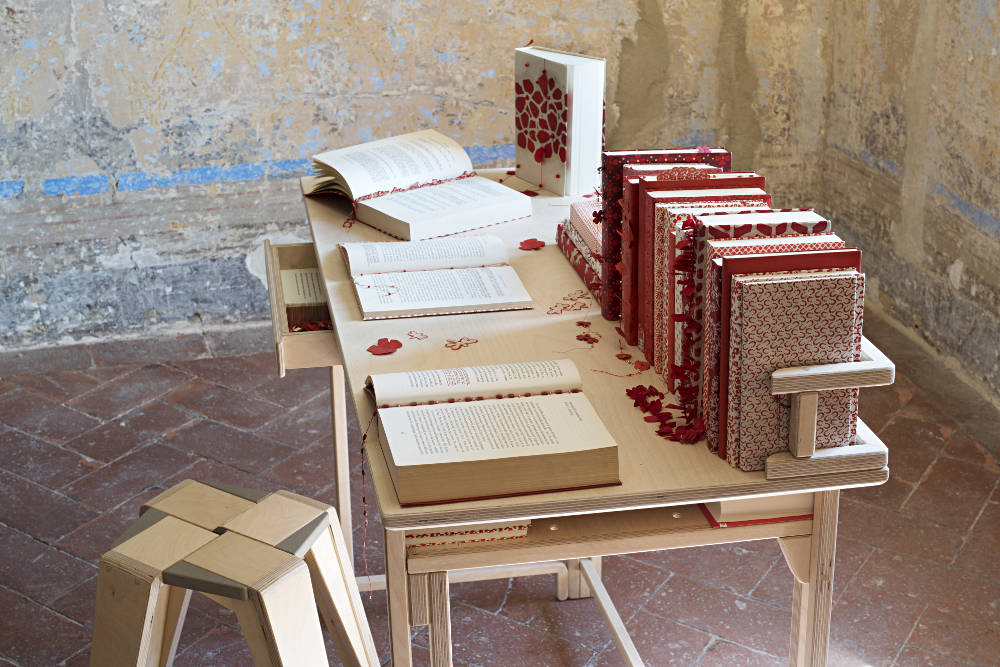 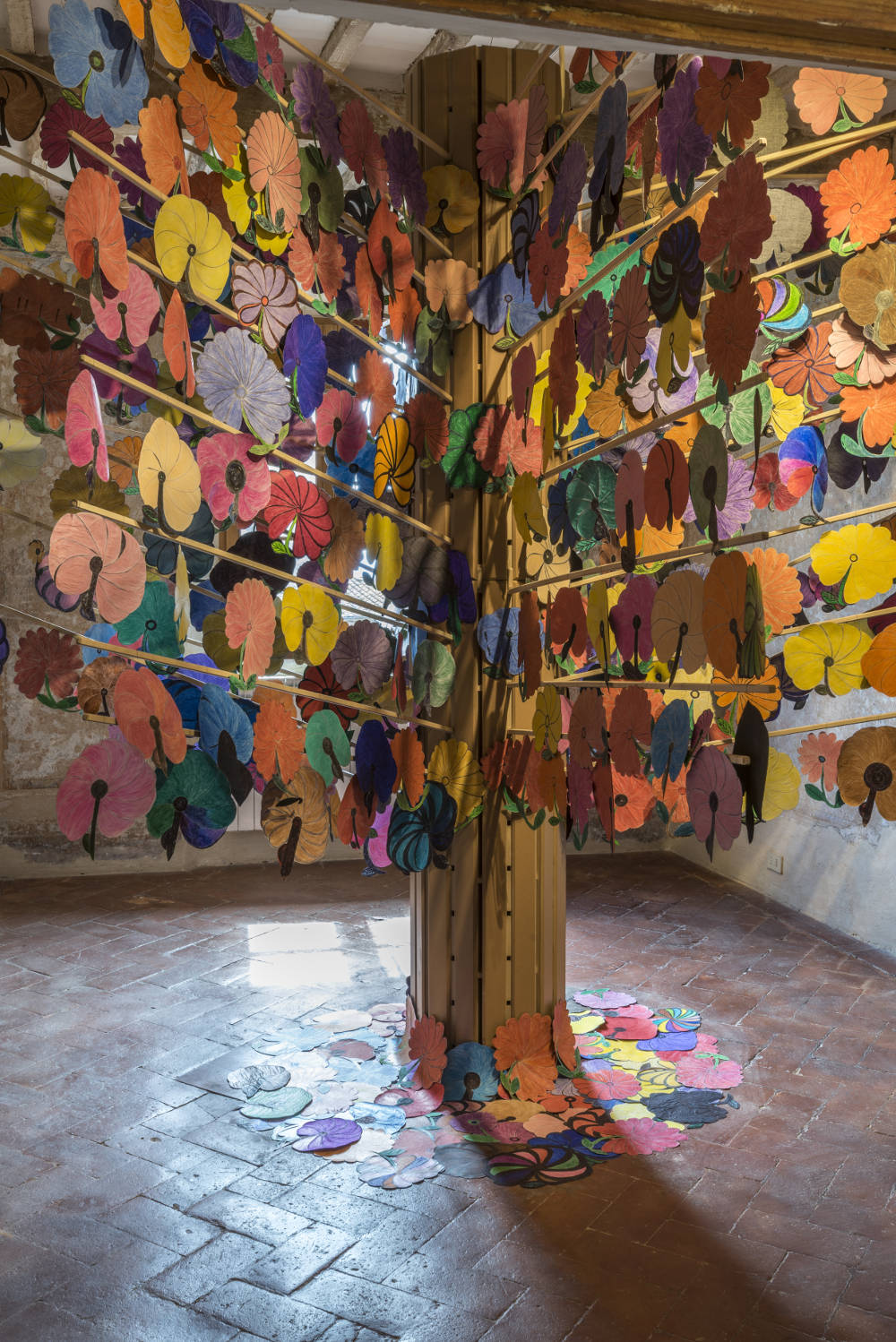 A series of new works, specially conceived by the artist for the rooms of the gallery, conjure up a universe of light forms, in which beauty dialogues with the density of the poetic, philosophical and existential content, and slow gestures become the metaphor of an attentive and closely considered reading of the texts. The modus operandi is the one long favoured by the artist, who for many years has worked to render texts into images.

It is not hard to guess that the work notes drawn on by Mezzaqui in devising this exhibition project include Jung’s Red Book, The Red Studio by Matisse, a dictionary open at the entry for rosso, which reads “lo stesso colore del sangue vivo” (“the same colour as living blood”) and a range of literary texts, stories and poems by the authors she loves most, the ones she starts from and goes back to. Among these, to mention just one, is David Grossman, who in Be My Knife writes: “Words fade, they lack the red of life”.

Mezzaqui is one of the best-known and acclaimed Italian artists on the international scene. She uses simple materials such as paper, fabric, thread and beads to create objects that are an expression of the time enclosed within them. The return to artisanal practices and the use of slow, repeated manual gestures – such as sewing, cutting, embroidering, weaving and recopying – give rhythm, in the artist’s work, to the passing minutes, and become the expression of a constant inner search, projected towards reaching a state of grace.

“Many of my works consist essentially of time, lots of time, including that of other patient people who give me a hand,” the artist says. “It’s as if every second is transformed into a bead or into a small piece of paper that is inserted into a long thread… You rely on an underlying rhythm and also an idea of circularity. The question of time relates to the mystery of life.” This reflection gave rise to Bianco naturale (“Natural White”), one of the new works in the show. Emerging in a seemingly unbroken thread from a white clay container is a necklace consisting of small pieces of paper alternating with beads. A series of black and white photos run across the walls, documenting the beauty and con dent dexterity of many busy hands around a table. Begun during the Meditation of Hands workshop held in Cesena in October 2016, the necklace was completed over the following months with the assistance of the Marzabotto working group, who help the artist to make some of her creations, sharing a working method based on slowness, patience and the repetition of tiny gestures. As the artist explains: “In the last few years this way of working has become consolidated, because both for me and for the other participants in the group it represents an added value of the work. Producing the work becomes a collective experience… it is enriched with humanity.”

Autobiografia del rosso, the work after which the show is named, consists of a selection of autobiographies and diaries from the artist’s library. She chose the texts she loves most, and went to work on each of them with coloured paper and beads, rendering them into the form she considers most in keeping with their content. Autobiografia del rosso recounts a world open to the boundless possibilities of existence, to the possibility of living other lives, in other places and in other ages, thus broadening our capacity for perception and developing the ability to recognize ourselves in the stories of others.

There are works in which the artist has decided to foreground writing by selecting and reproducing specific portions of text. In these pieces the written word is not altered in any way, and is offered to the viewer simply as a fragment. This is the case, for instance, of the poems of Emily Dickinson that we encounter in one of the rooms of the gallery, or the extracts from the Grimm brothers’ Thorn Rose, which the artist has suspended in mid air, transforming the space between the words into a void rich in meaning. In this type of work, in which the word becomes the protagonist of the exhibition space and displays all its power as a language medium and its beauty as an aesthetic entity, the artisanal methods employed by the artist originate from the practice of reading.

There is something magical and at once sacred and redemptive in all forms of manual endeavour, which returns as a distant echo in these windows of woven words. The “Seventeen Haiku” of Jorge Luis Borges that Mezzaqui positions along a corridor are patiently and carefully recomposed through the use of small celluloid letters suspended from a very fine grid of threads. Each of the 17 haiku is accompanied by a delicate origami, an embroidered silk crane which recalls the thousand cranes of the first work in which books were transformed in the hands of the artist (MoMA PSI, 1998).

like MATRIX (2014), is impossible to bring into focus. This gives rise to feelings of dislocation and vertigo in the viewer. Using the full variety of spaces offered by the gallery, the exhibition continues with different linear works that attempt an objective mapping of subjective space. An early example of body mapping, INTO THE LIGHT (1986-7), is a hollow lead body case whose surface is divided by the same intersecting vertical and horizontals found