This September, The Mayor Gallery presents ’Rock Stars & Strawberries’ (title inspired by the artist’s slang terms for the characters he depicted) which is the first London solo exhibition of the self-taught New Orleans artist Roy Ferdinand (1959 – 2004). A selection of 18 works from 1990 – 2004 is exhibited. 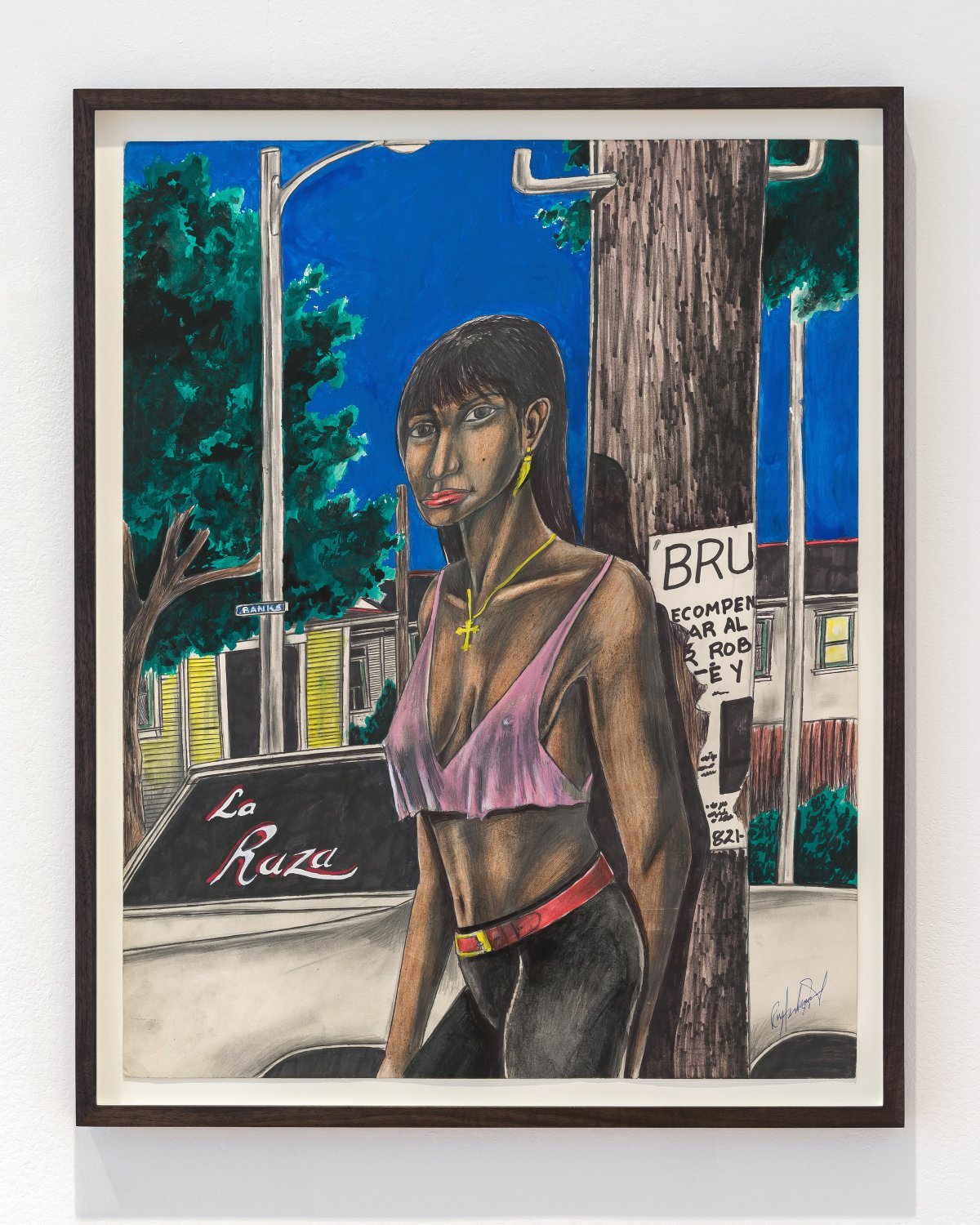 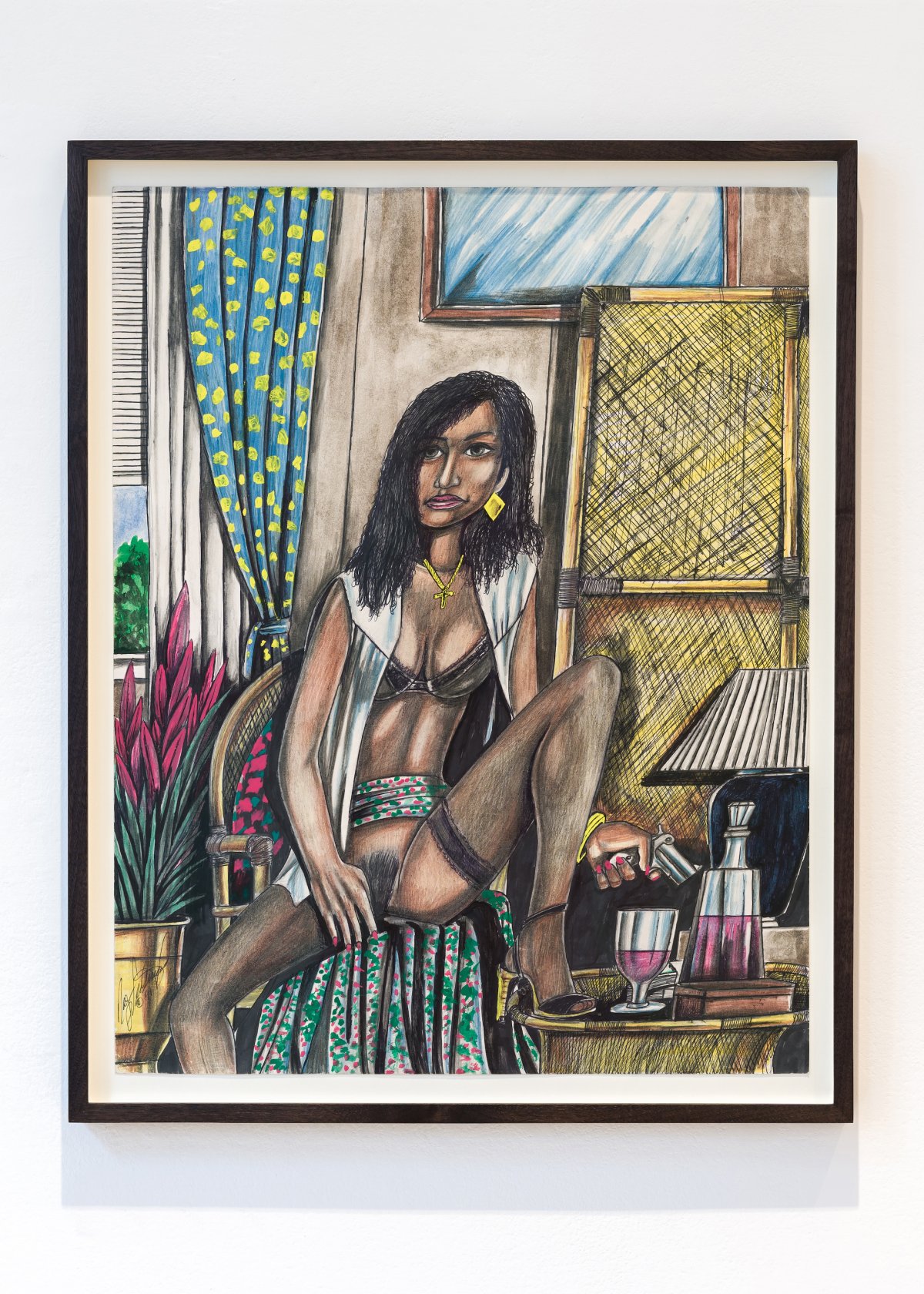 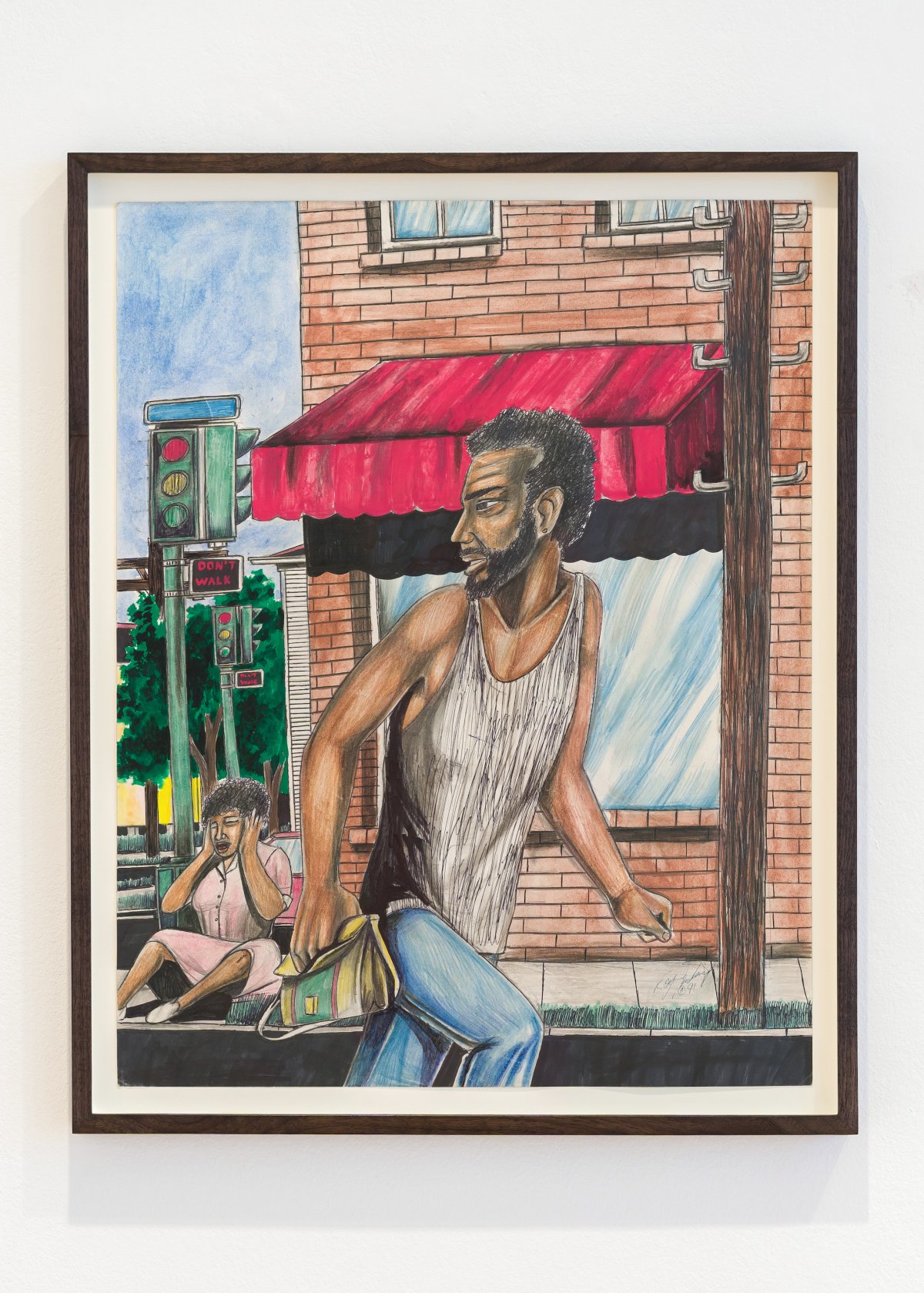 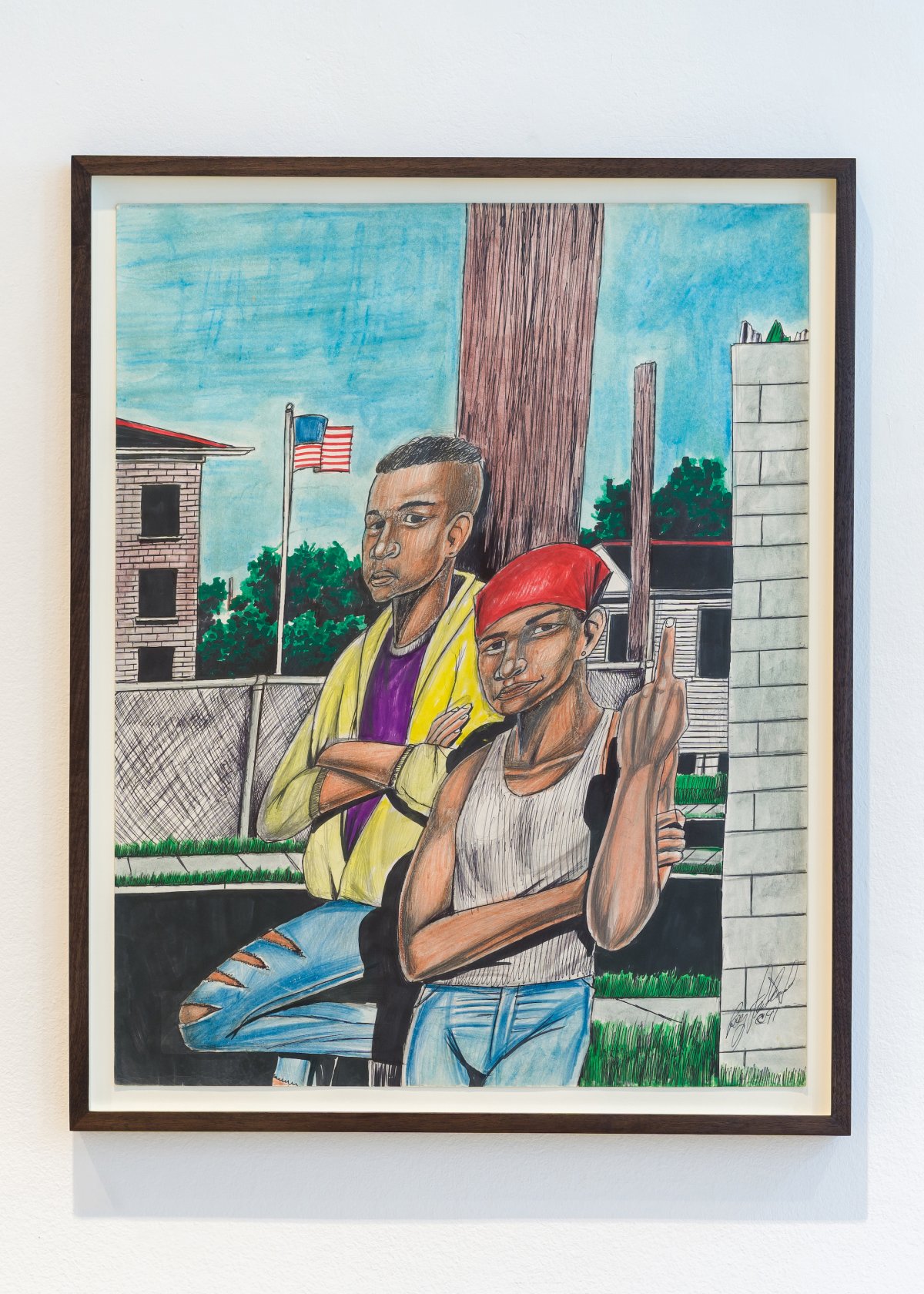 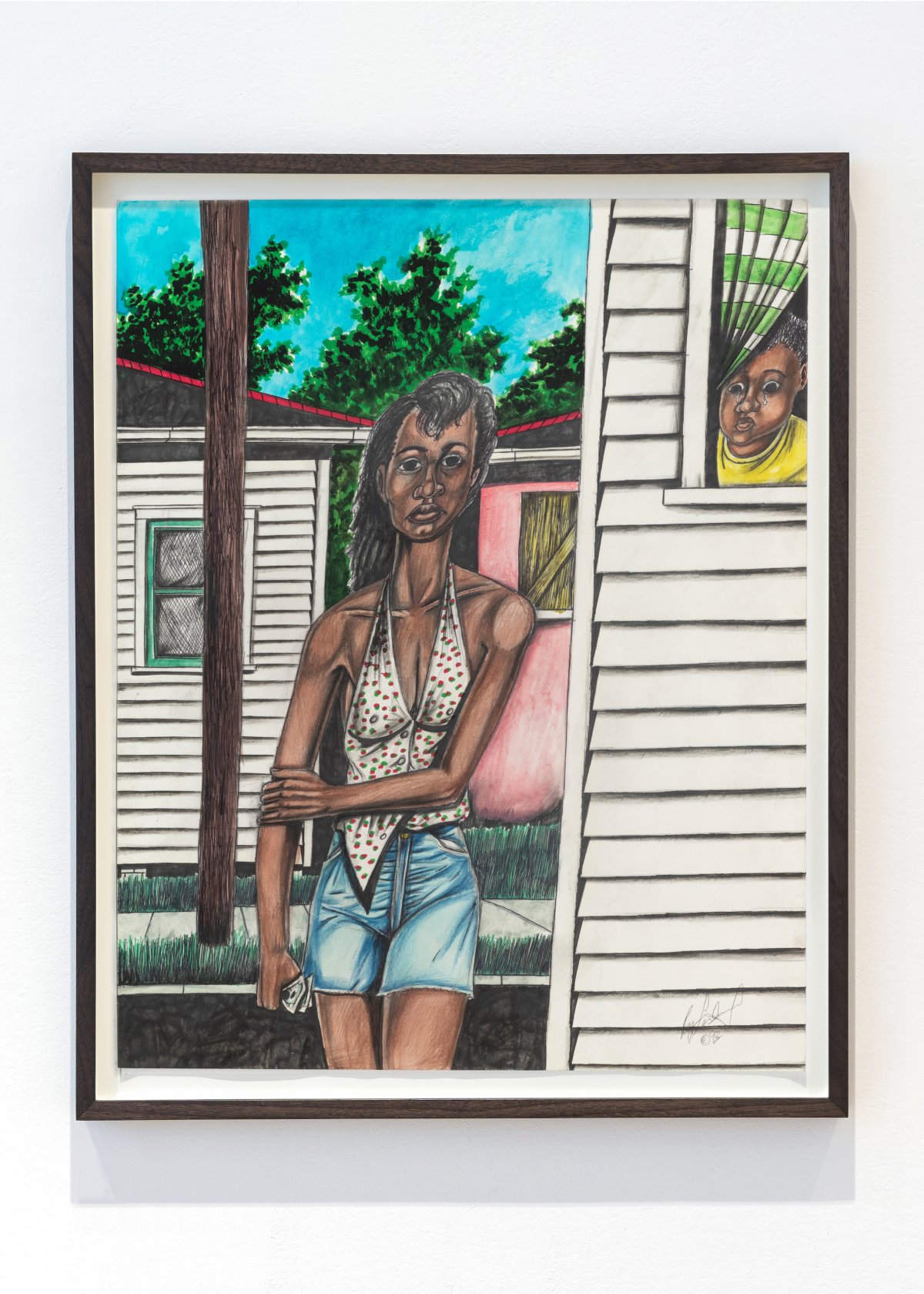 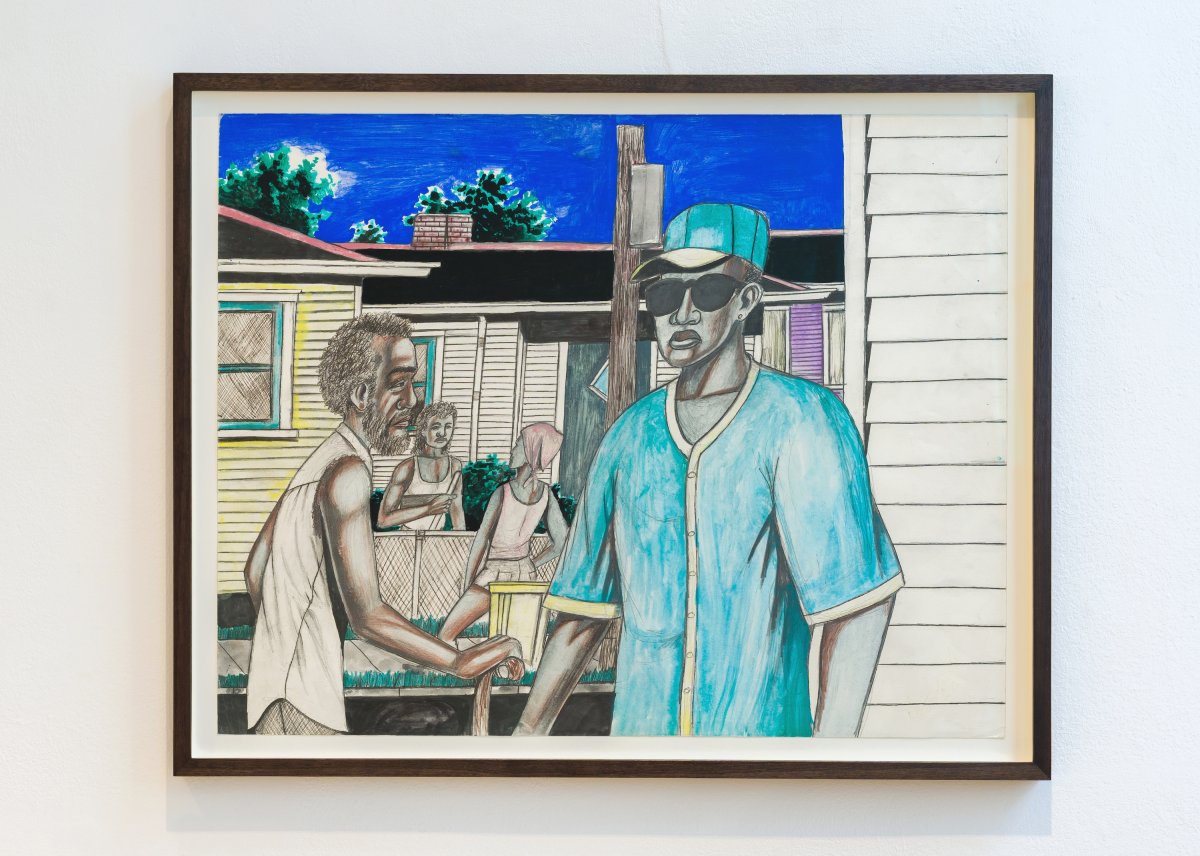 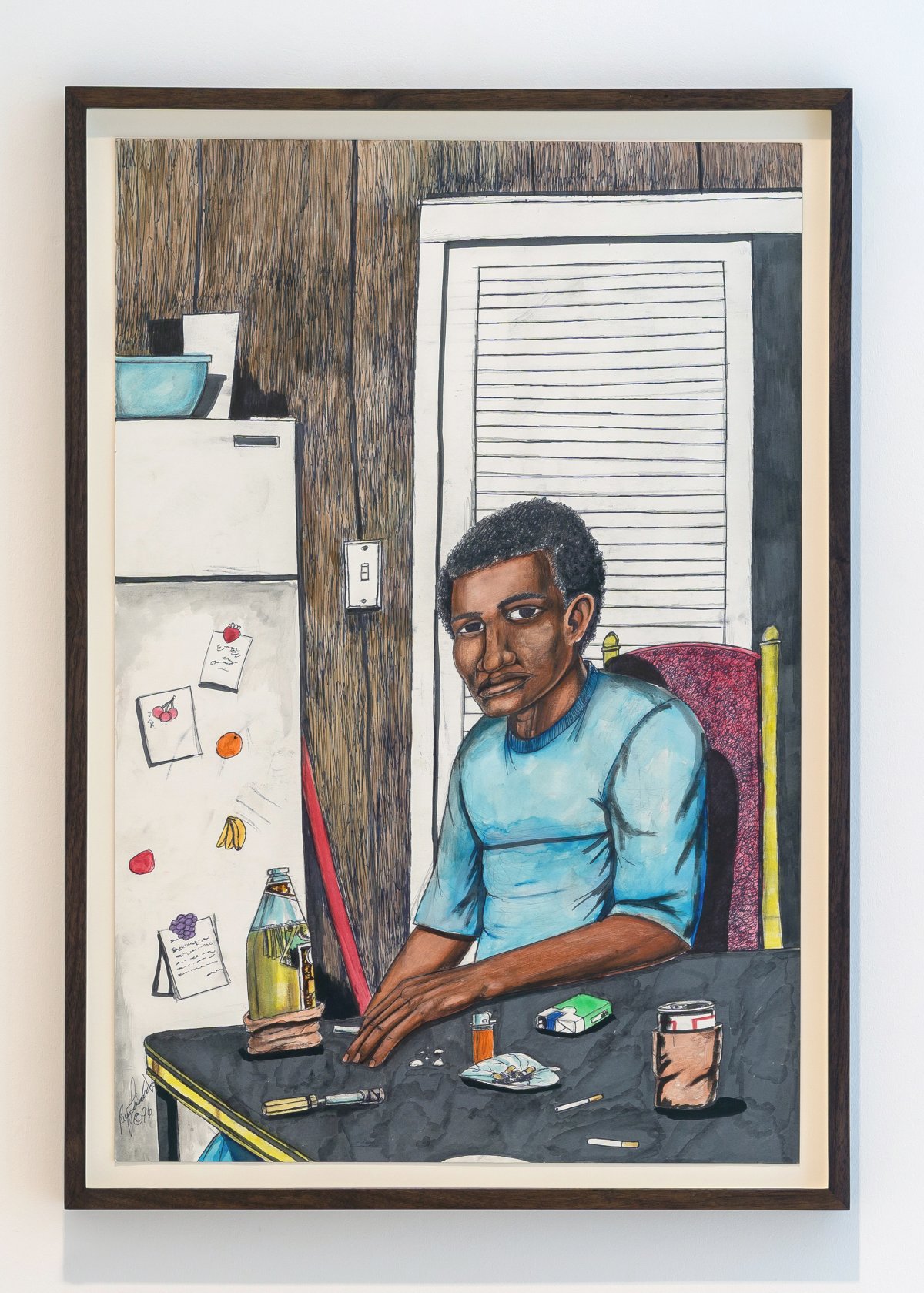 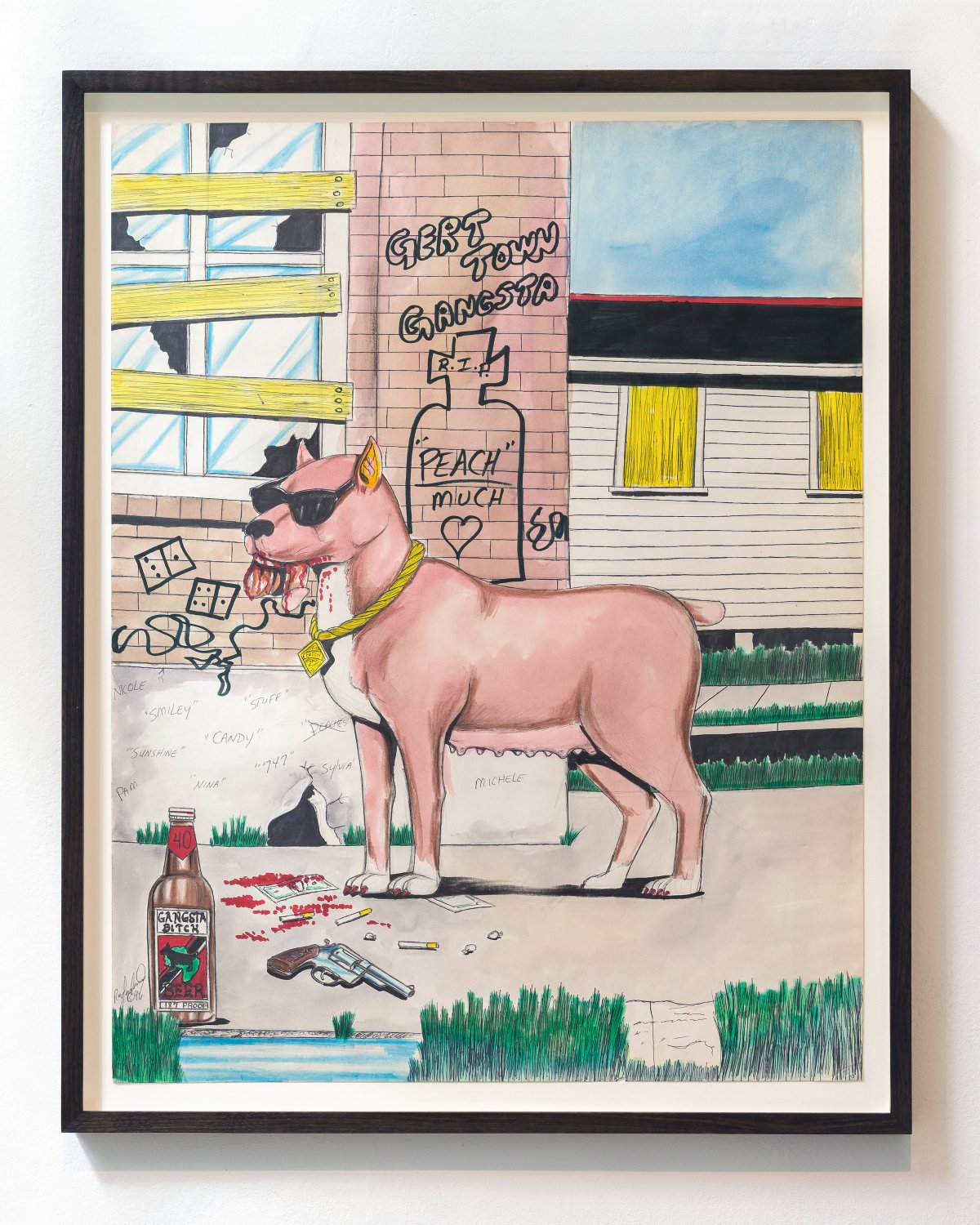 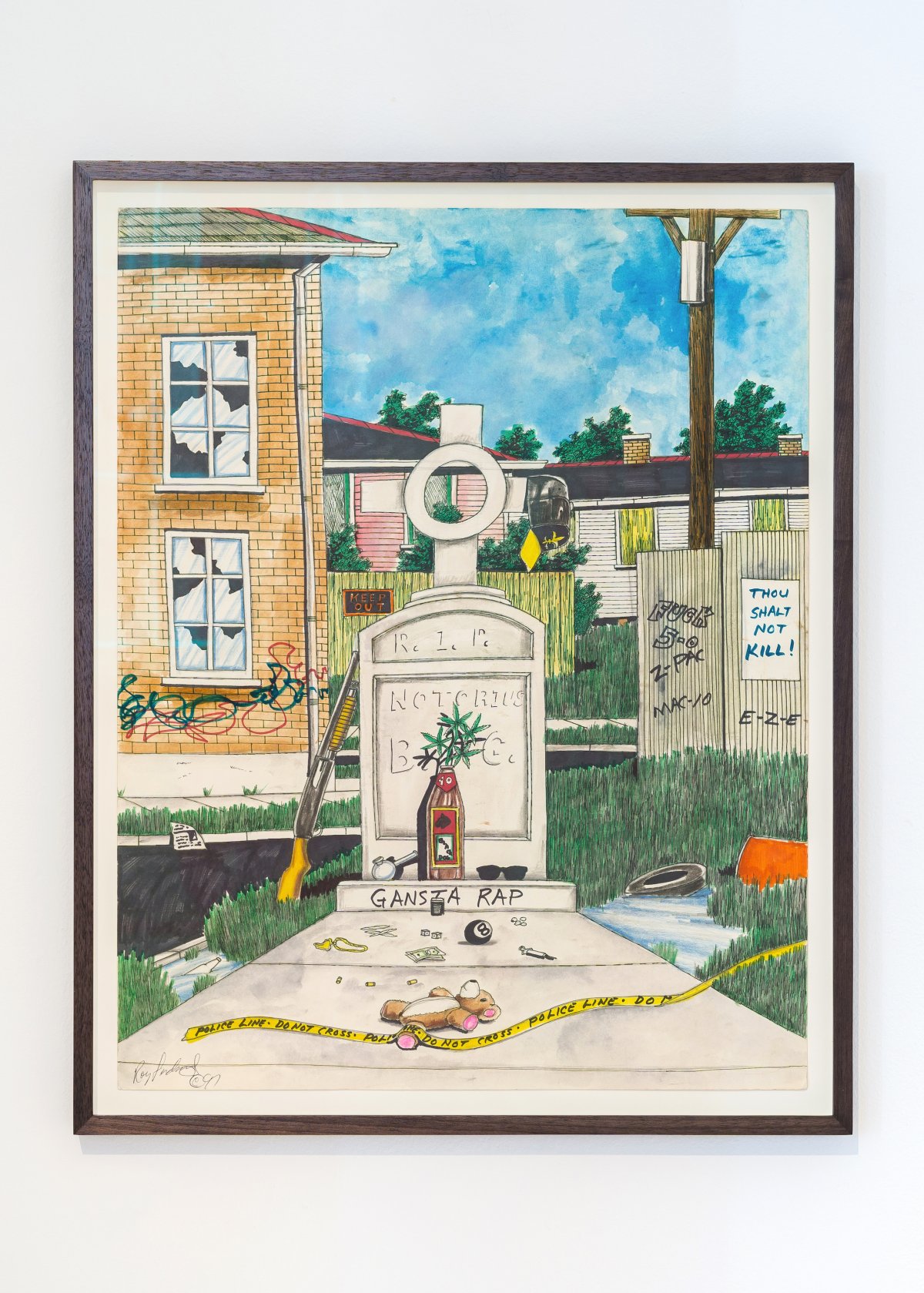 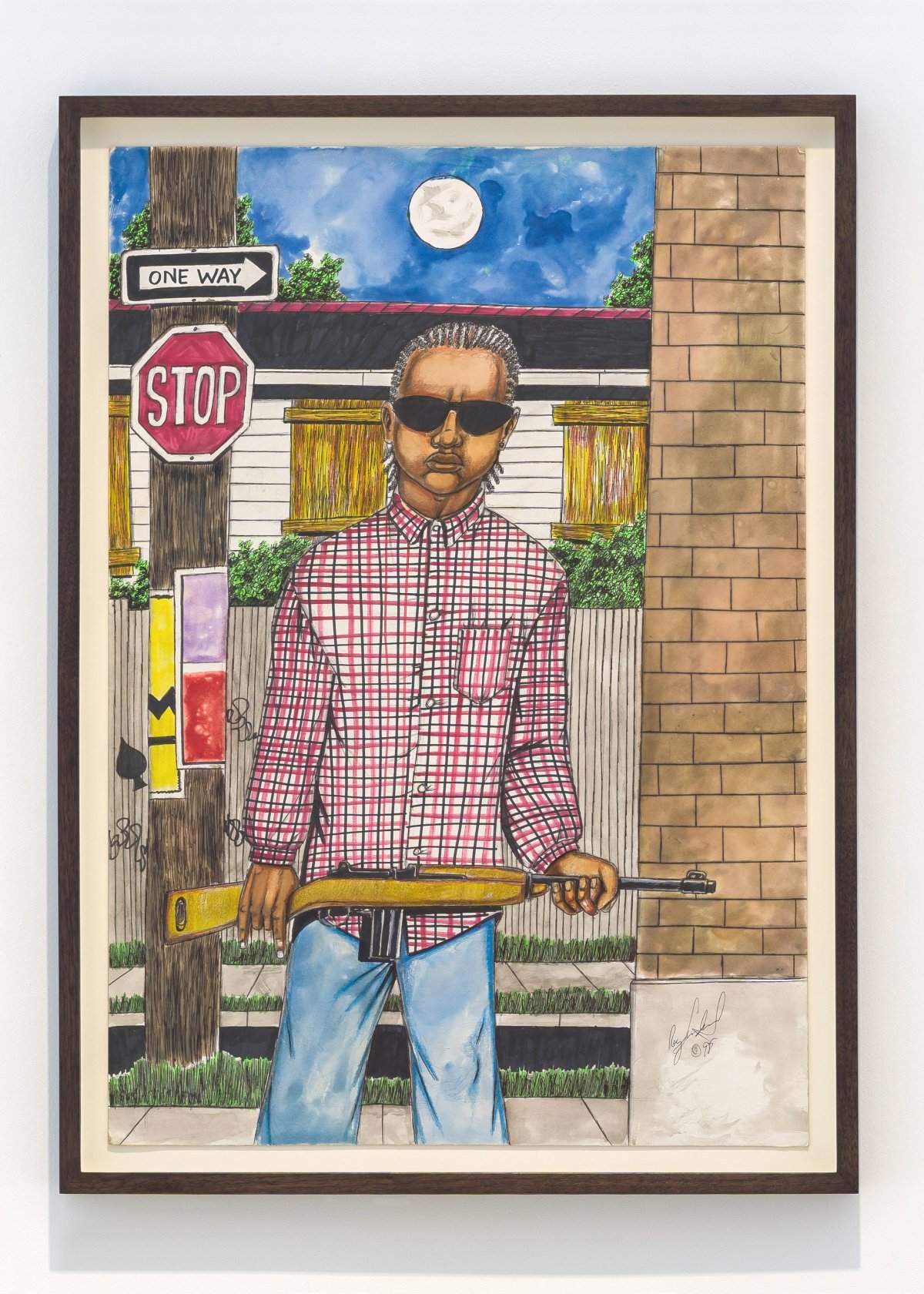 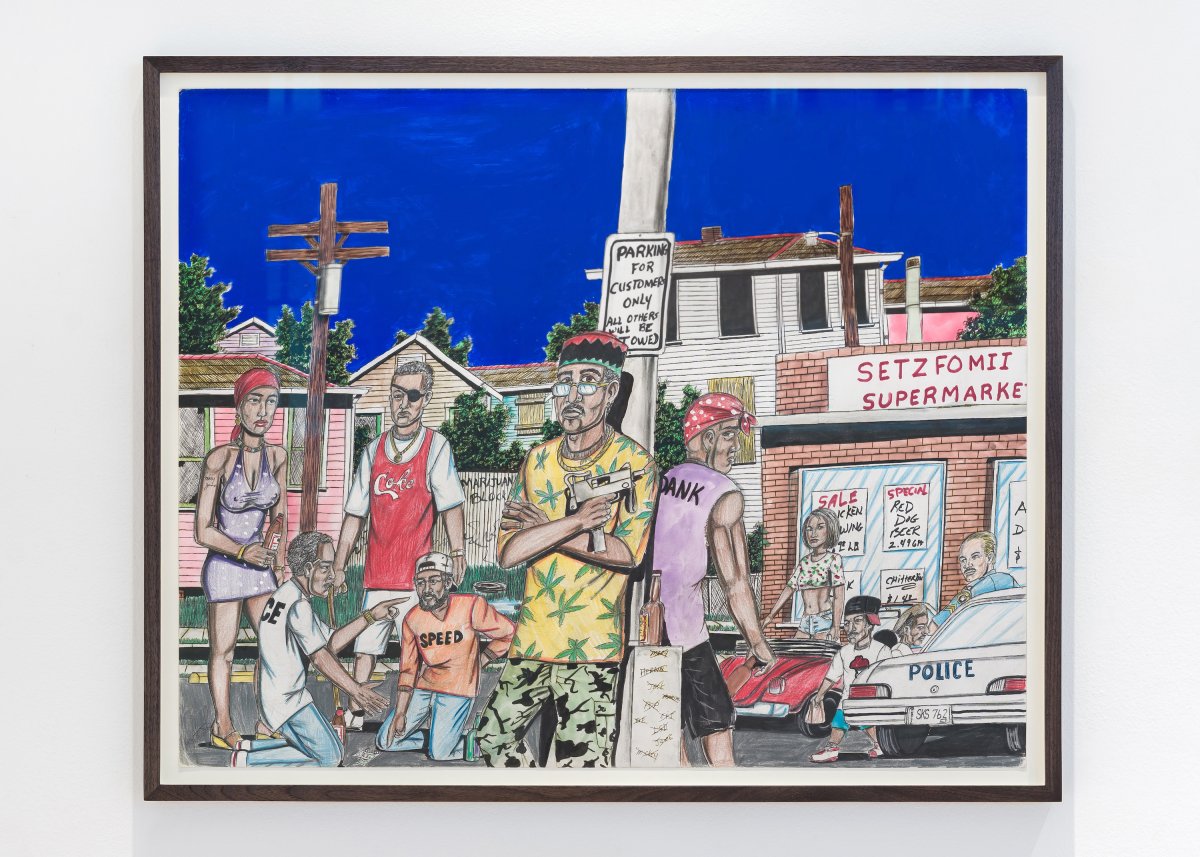 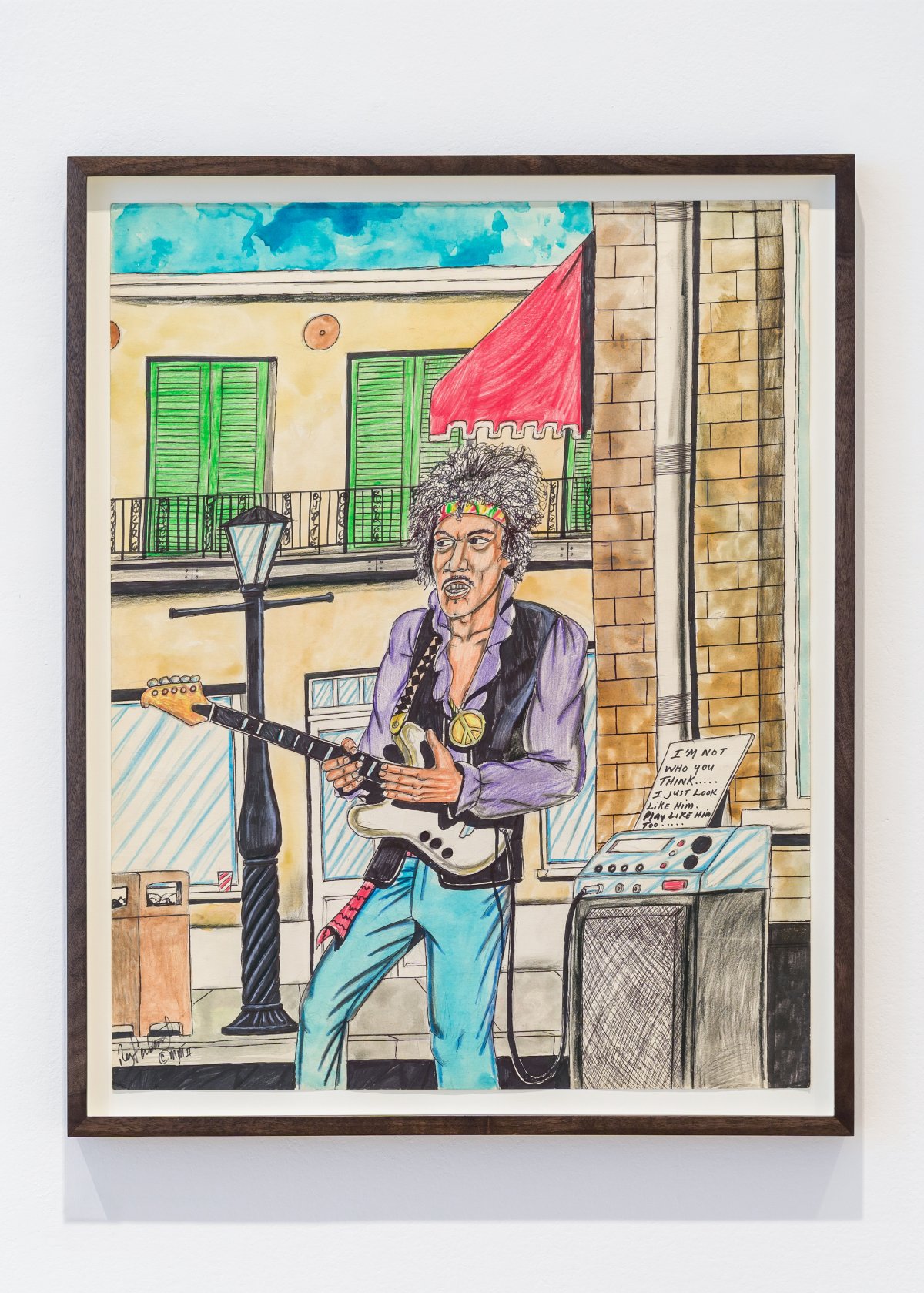 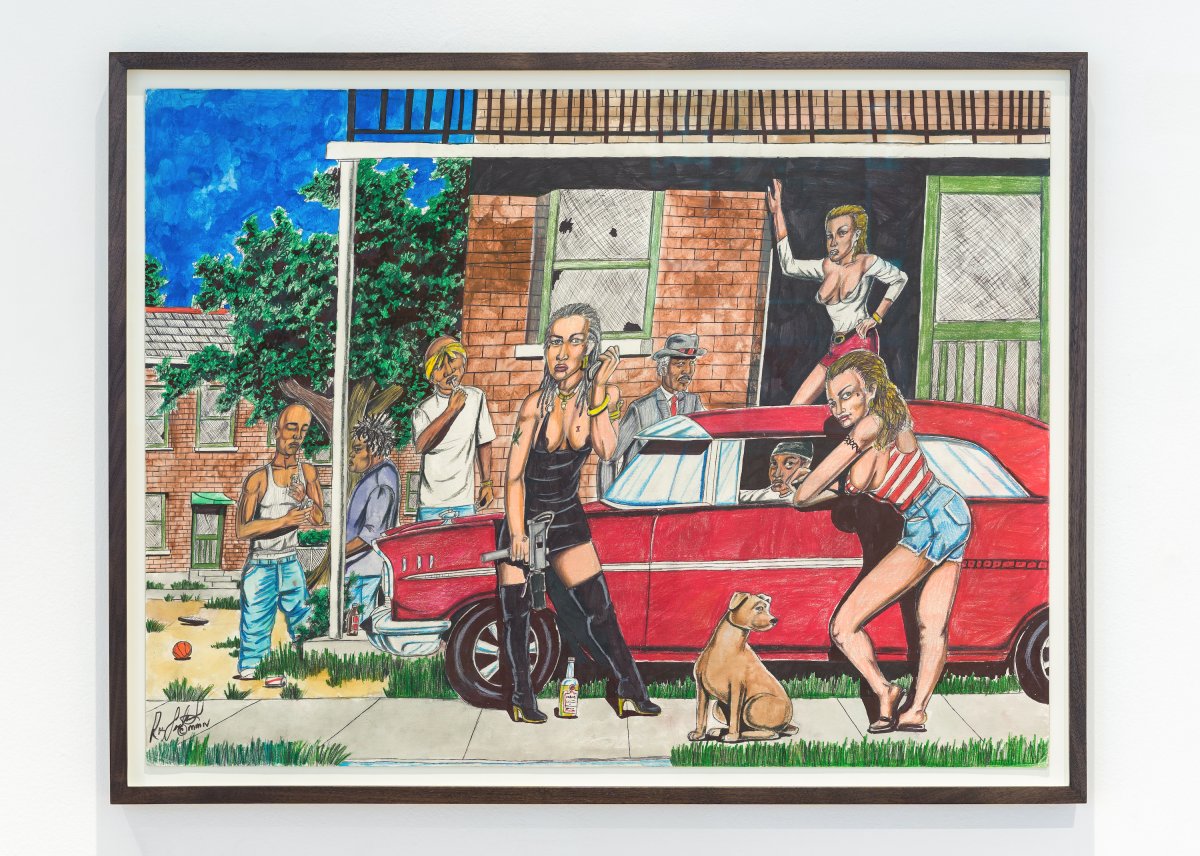 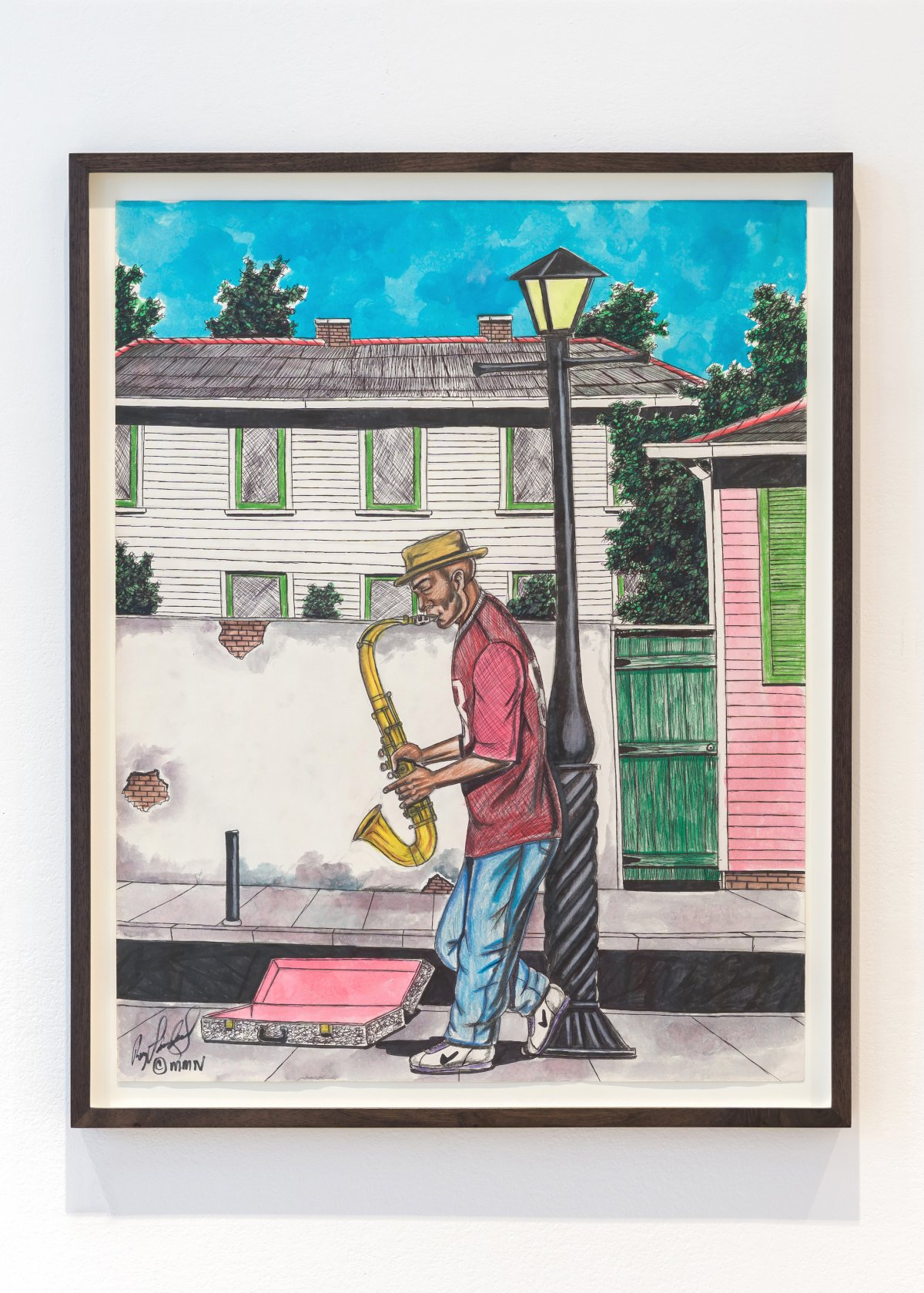 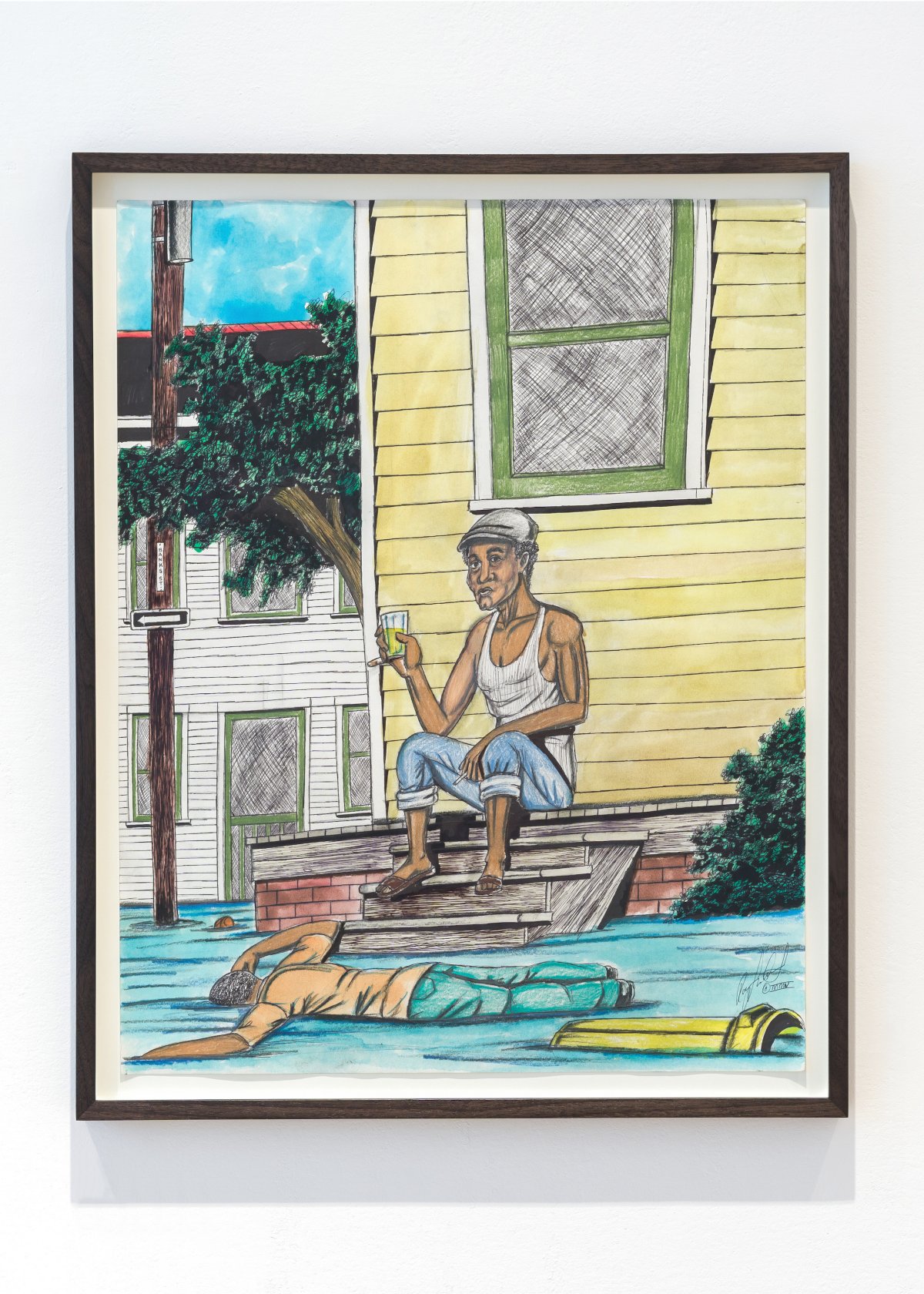 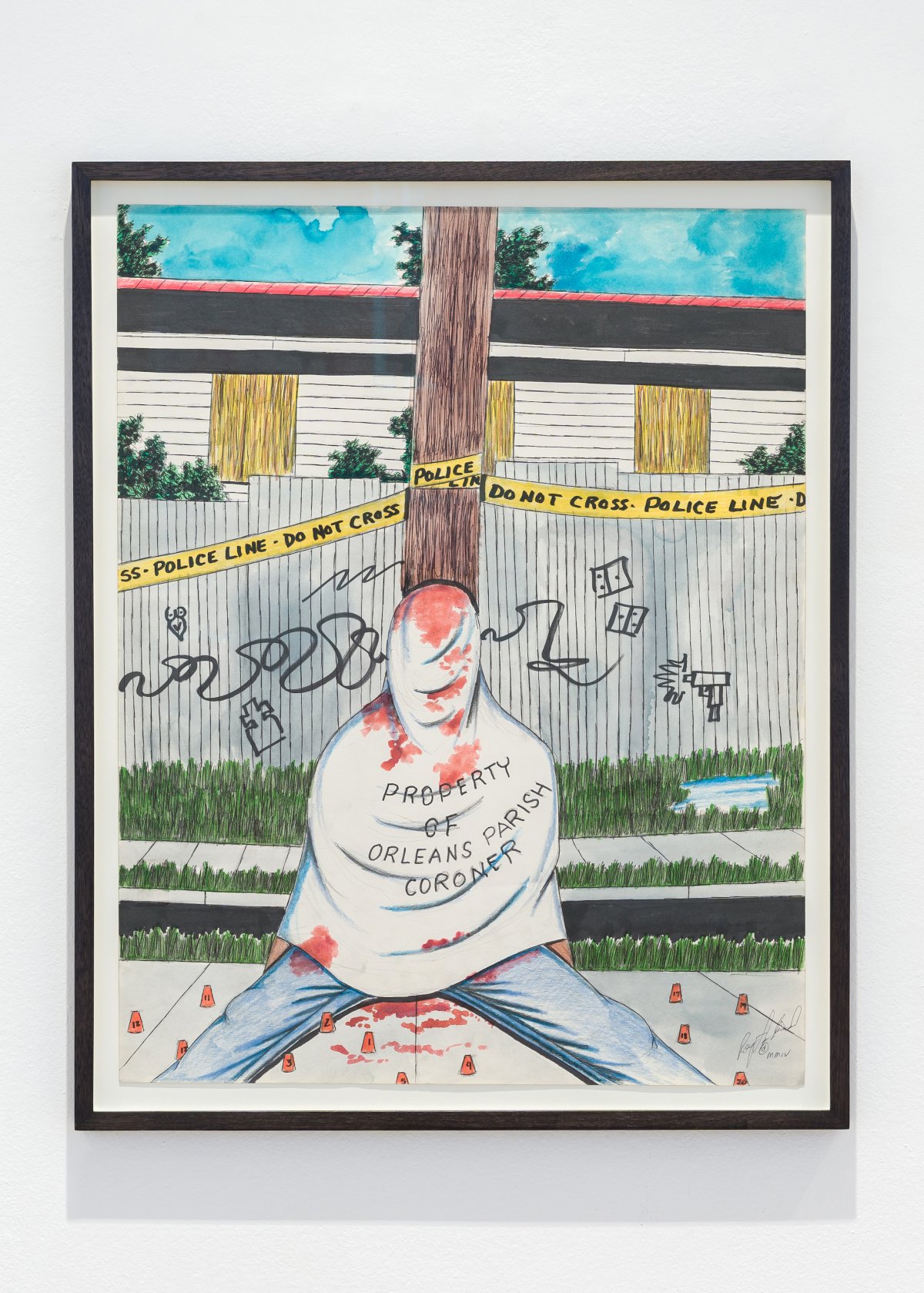 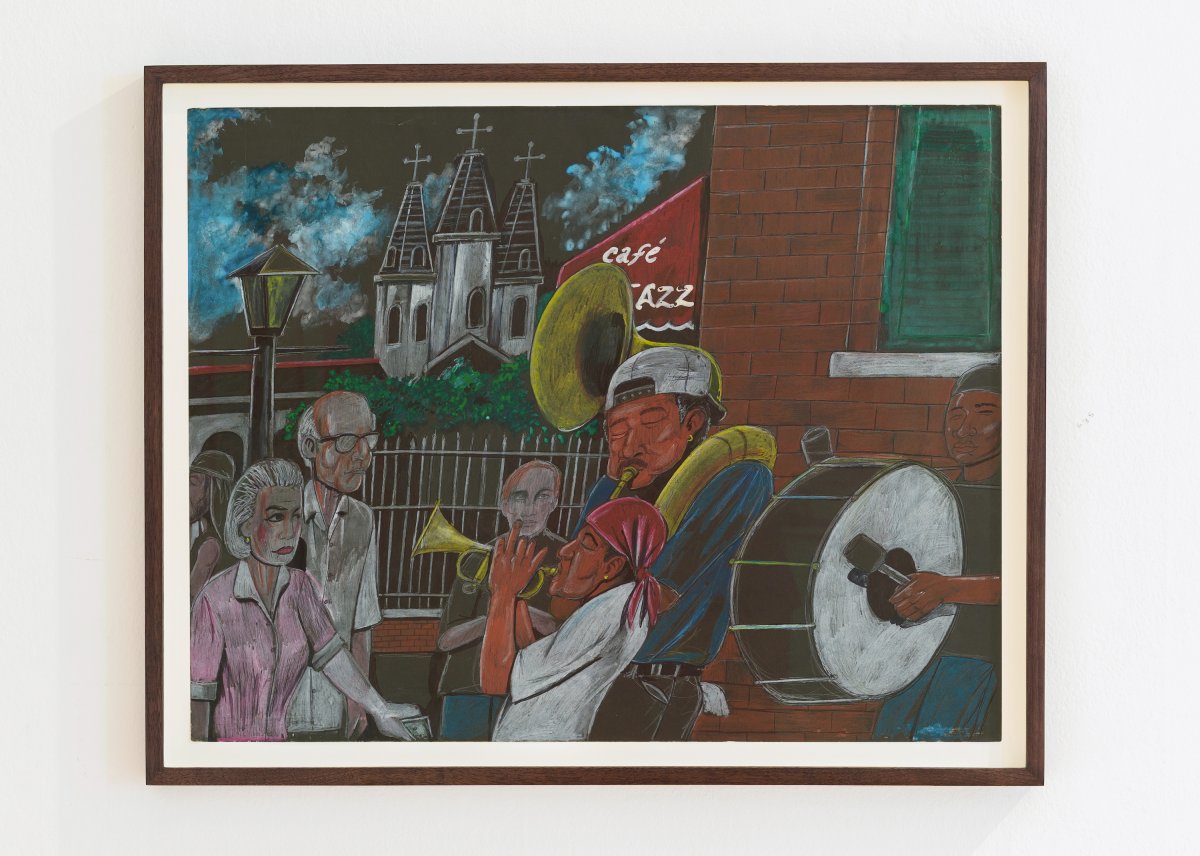 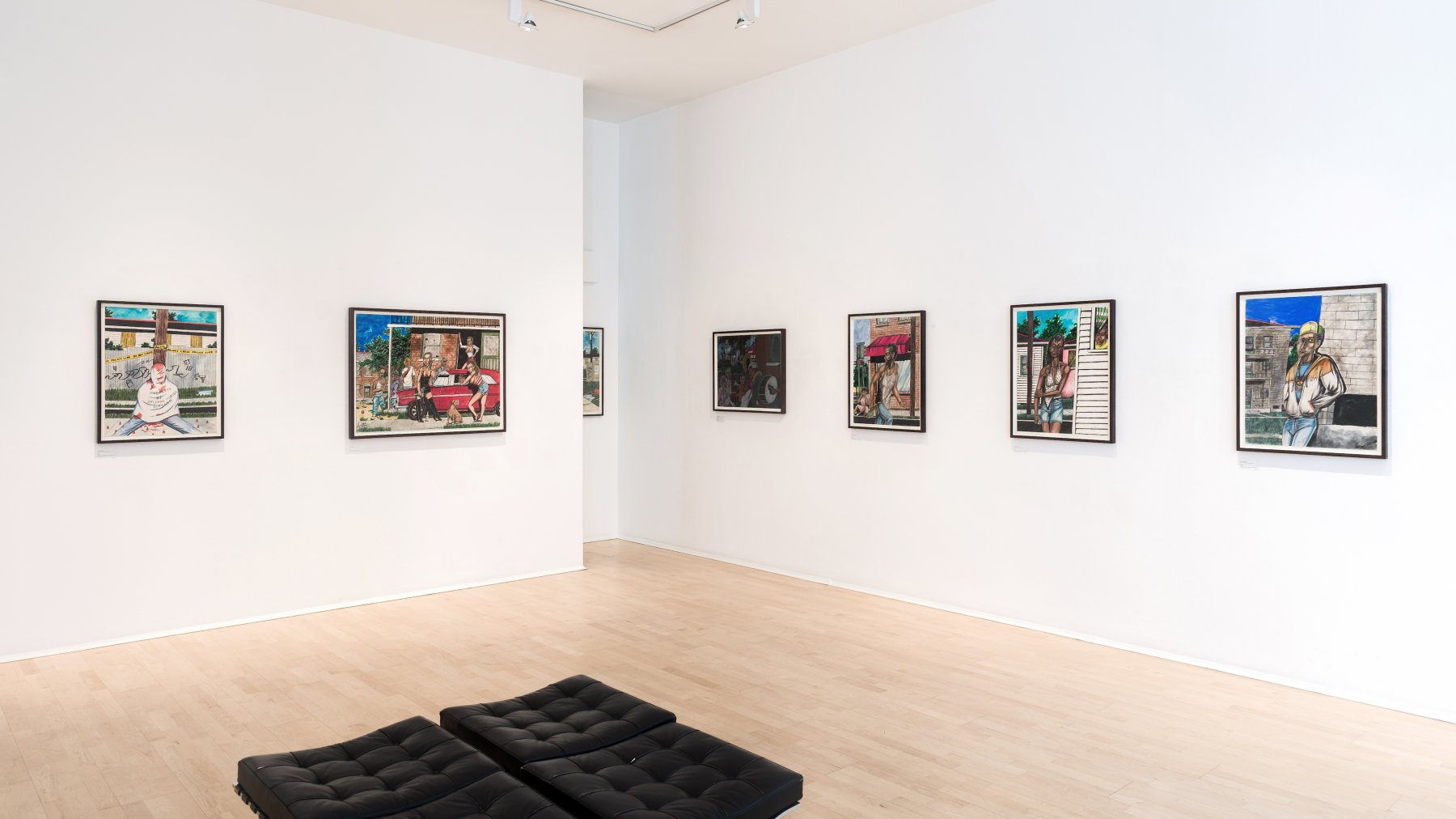 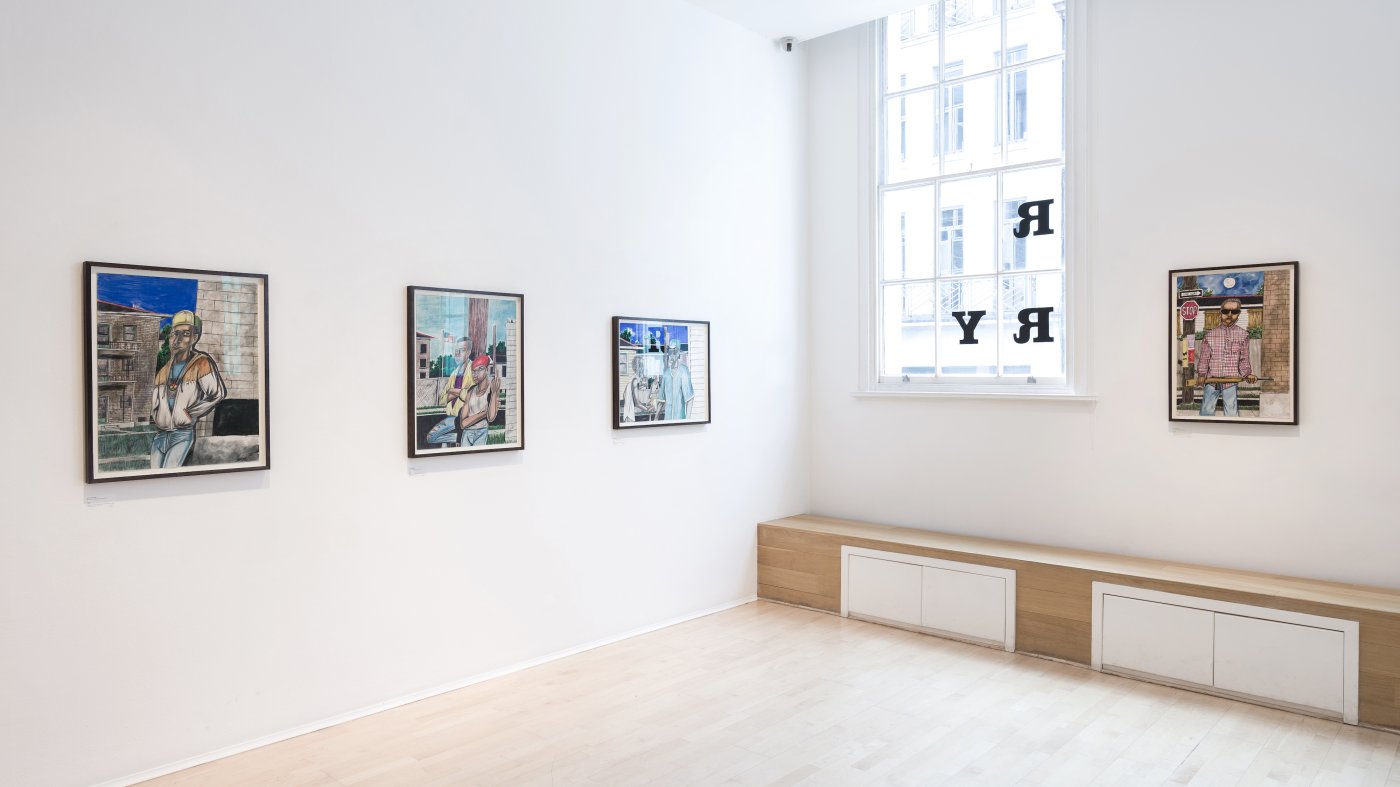 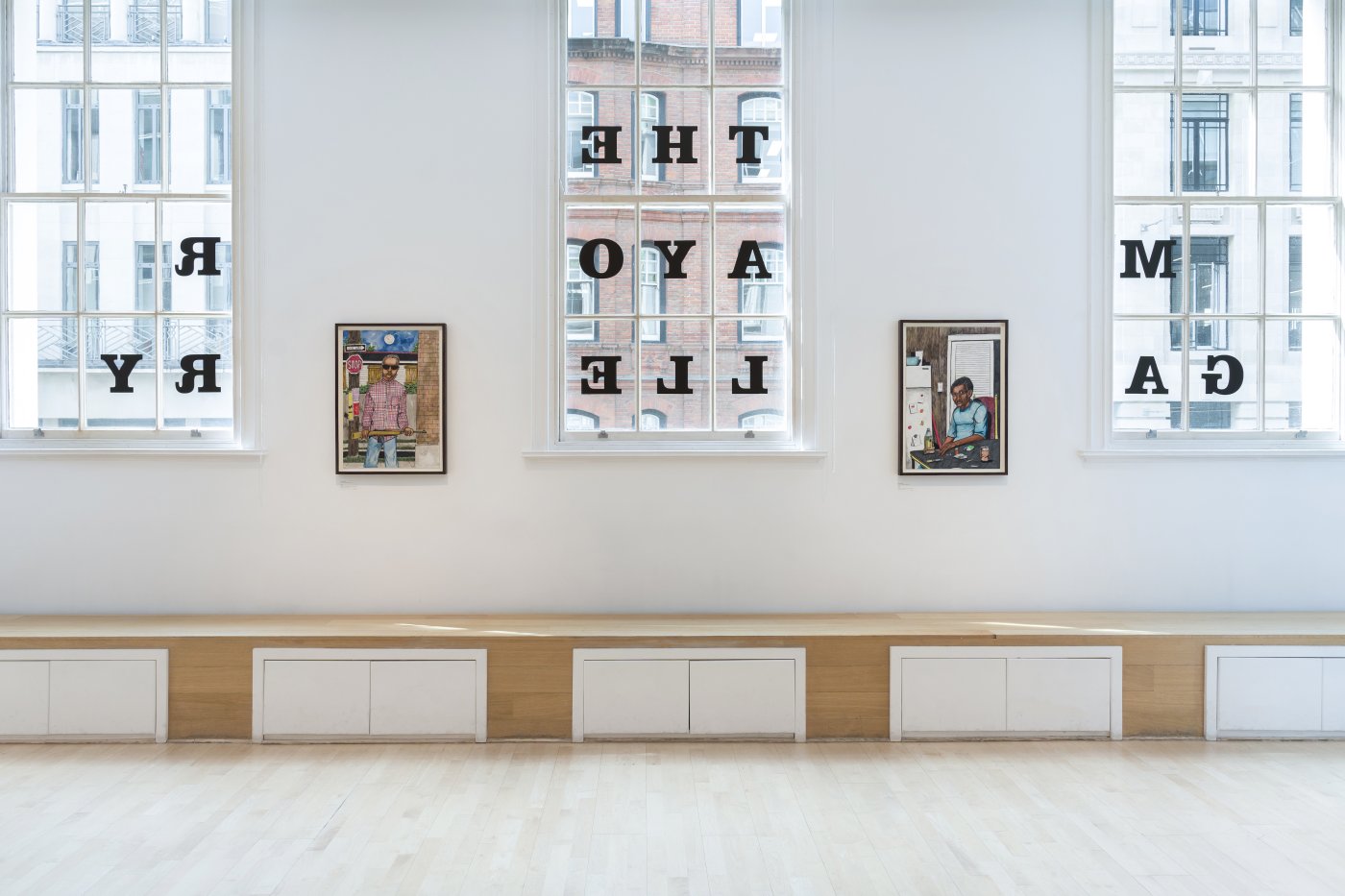 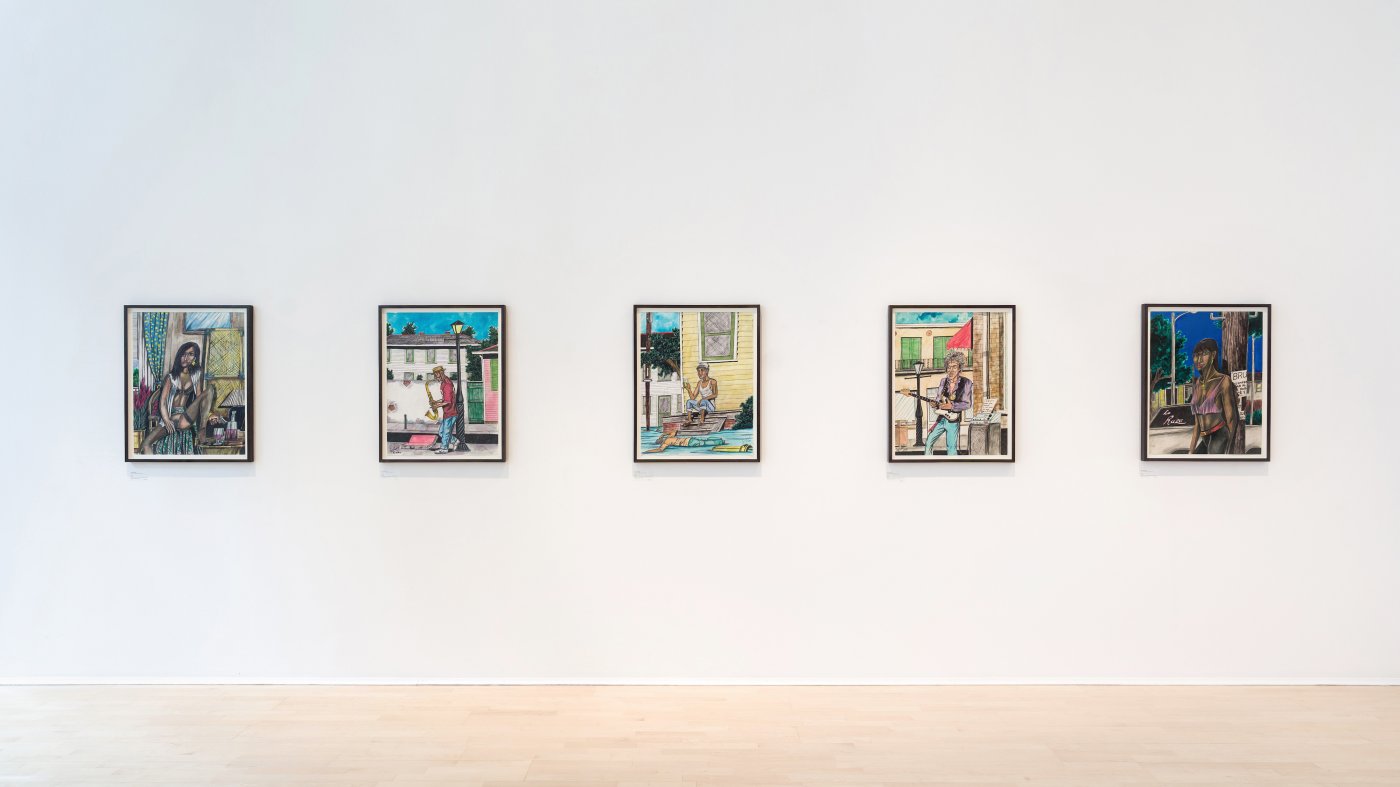 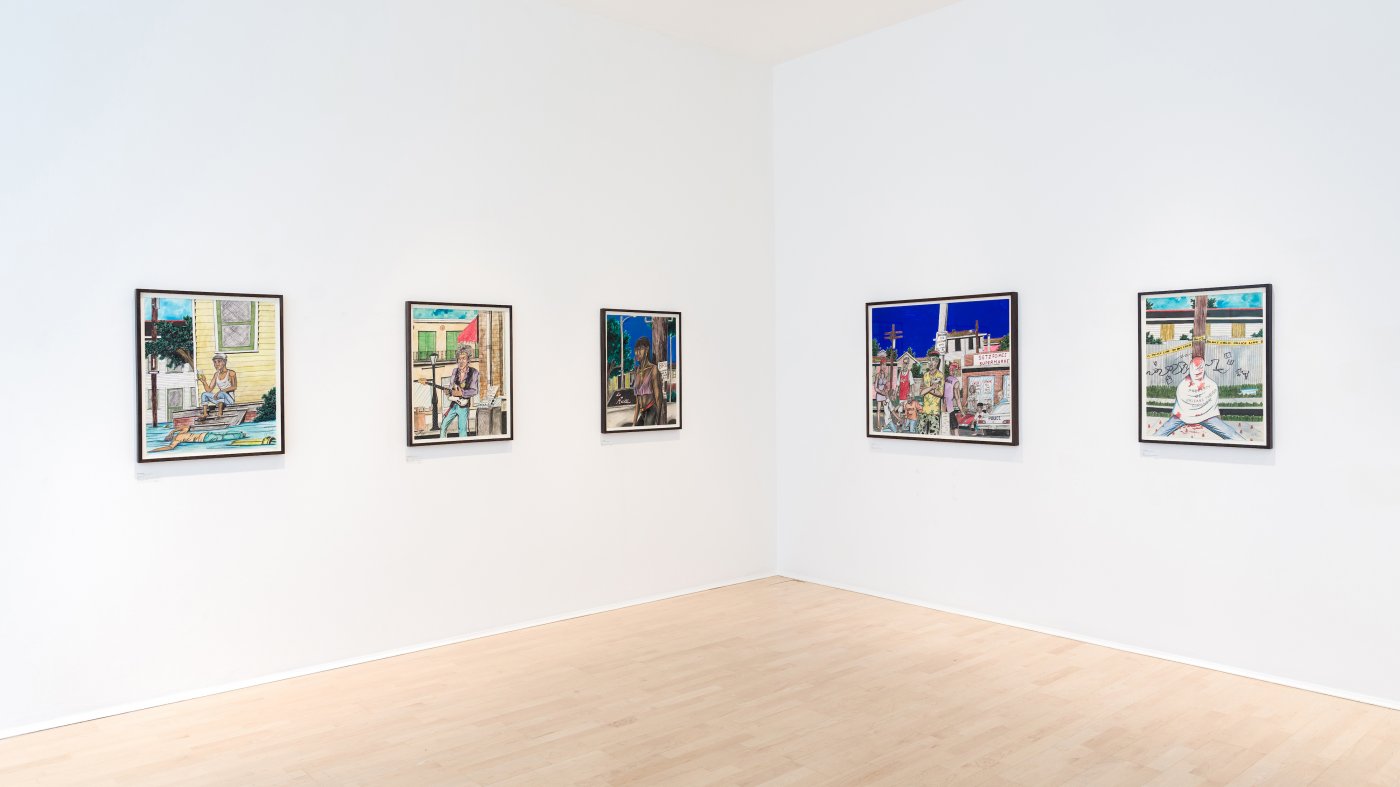 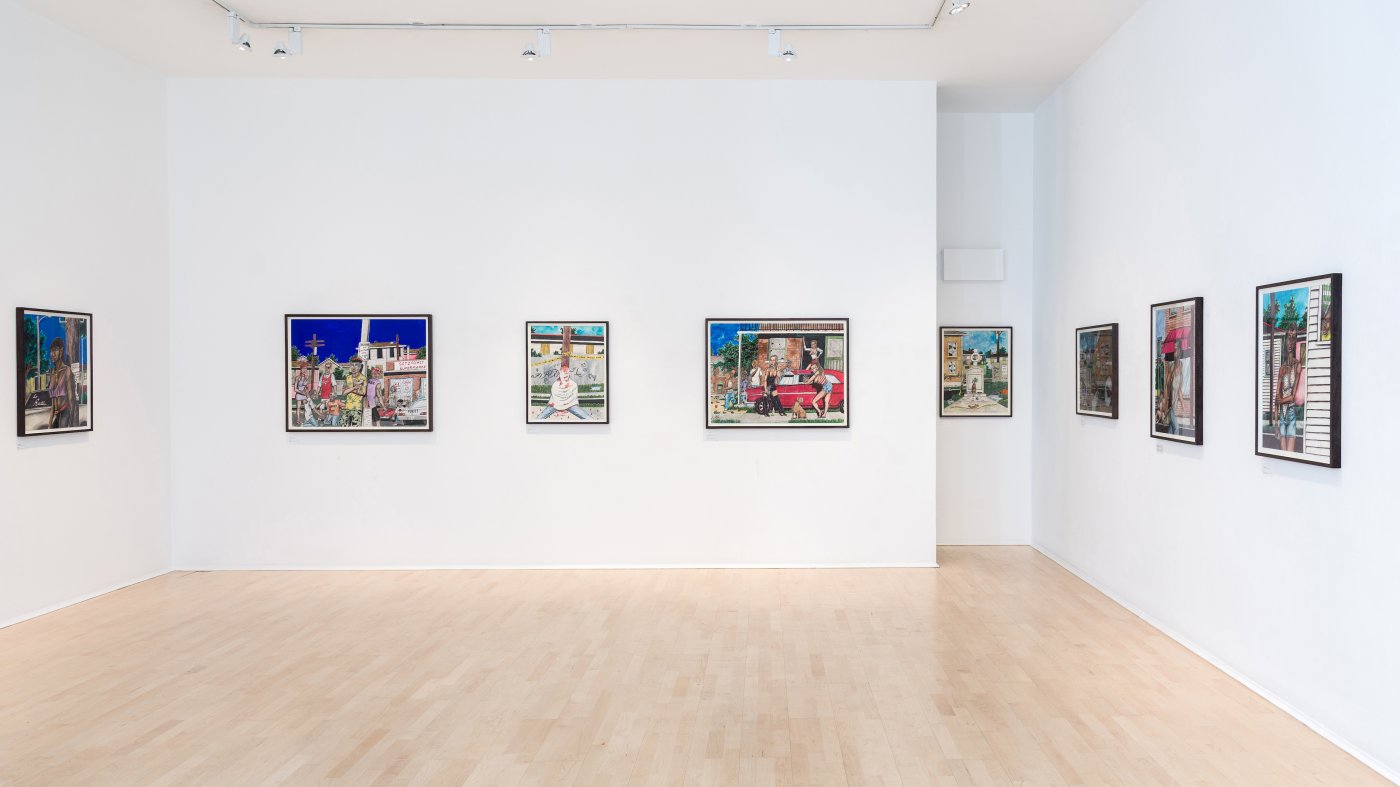 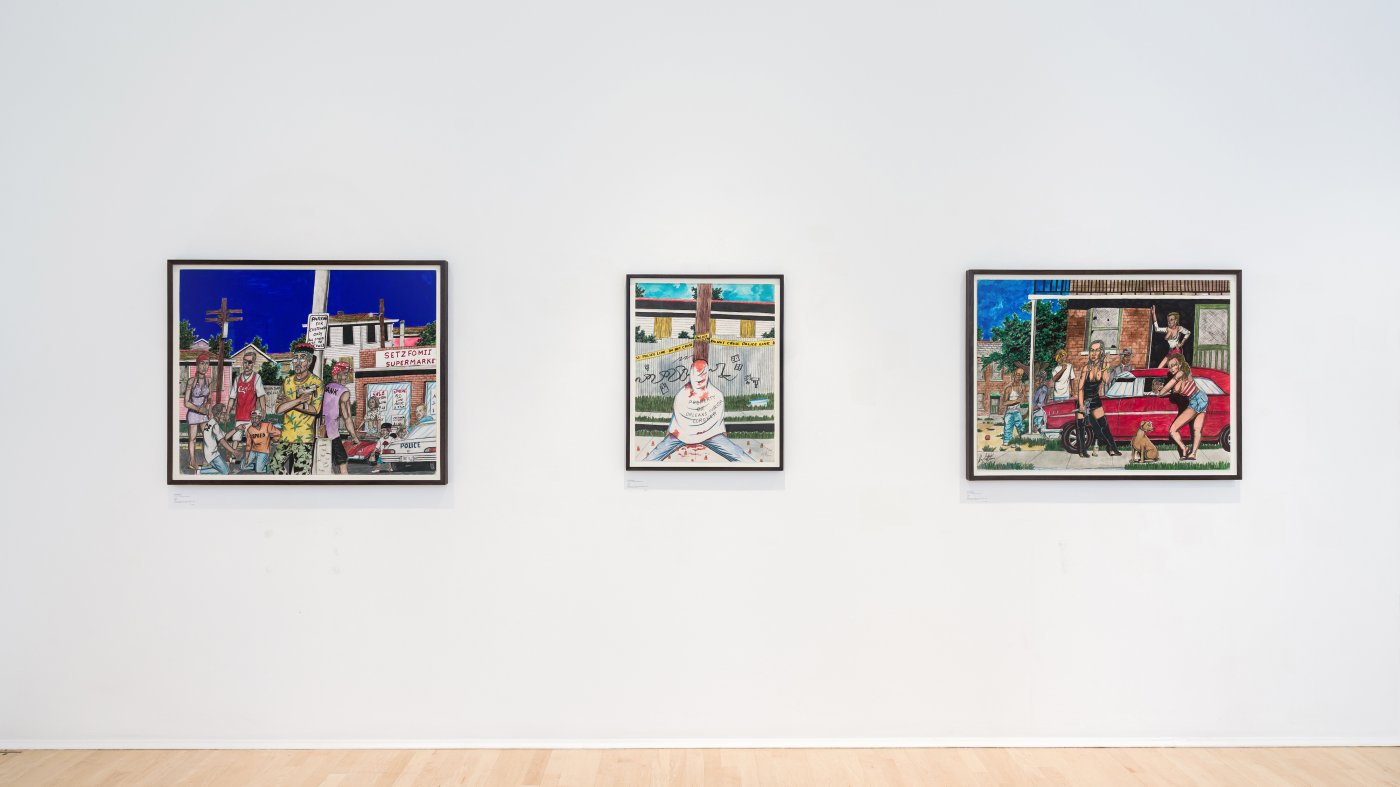 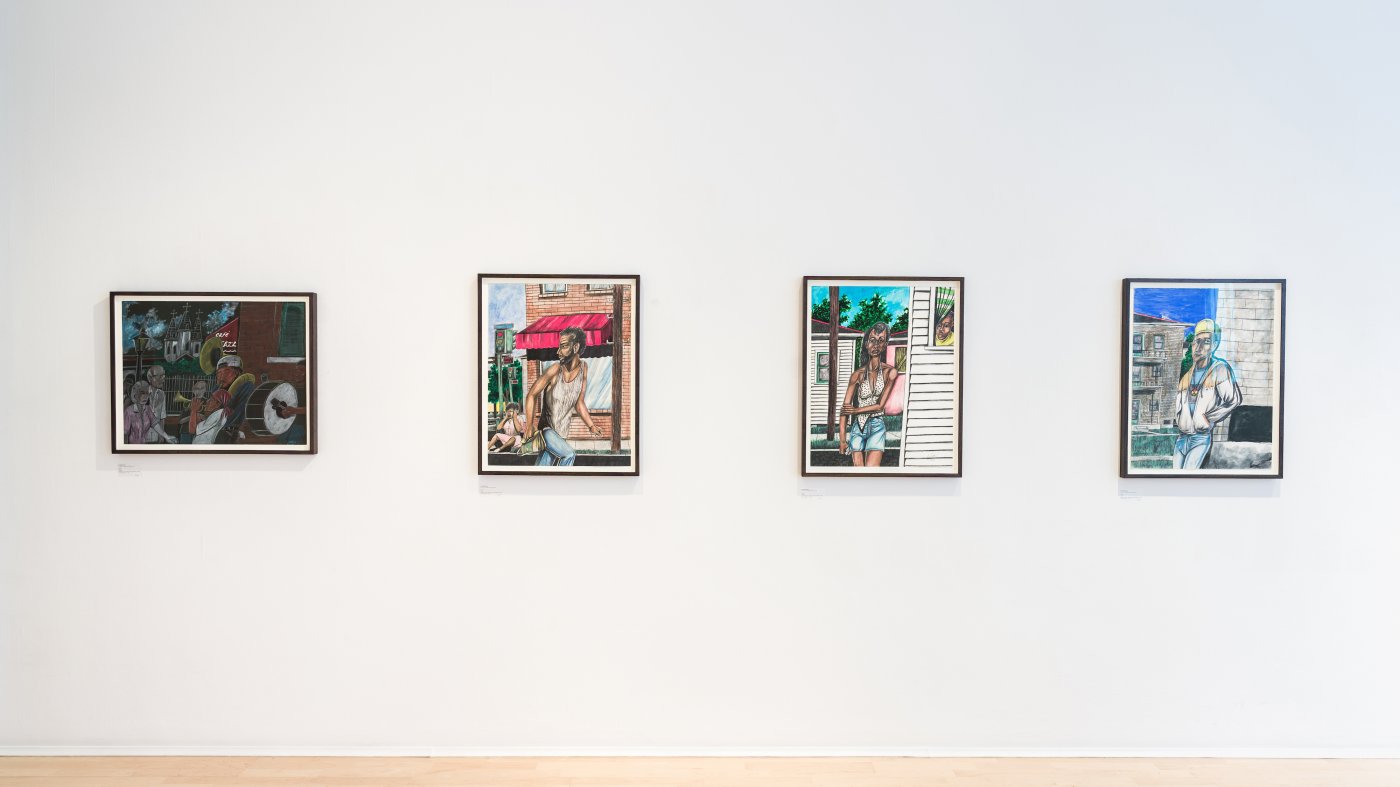 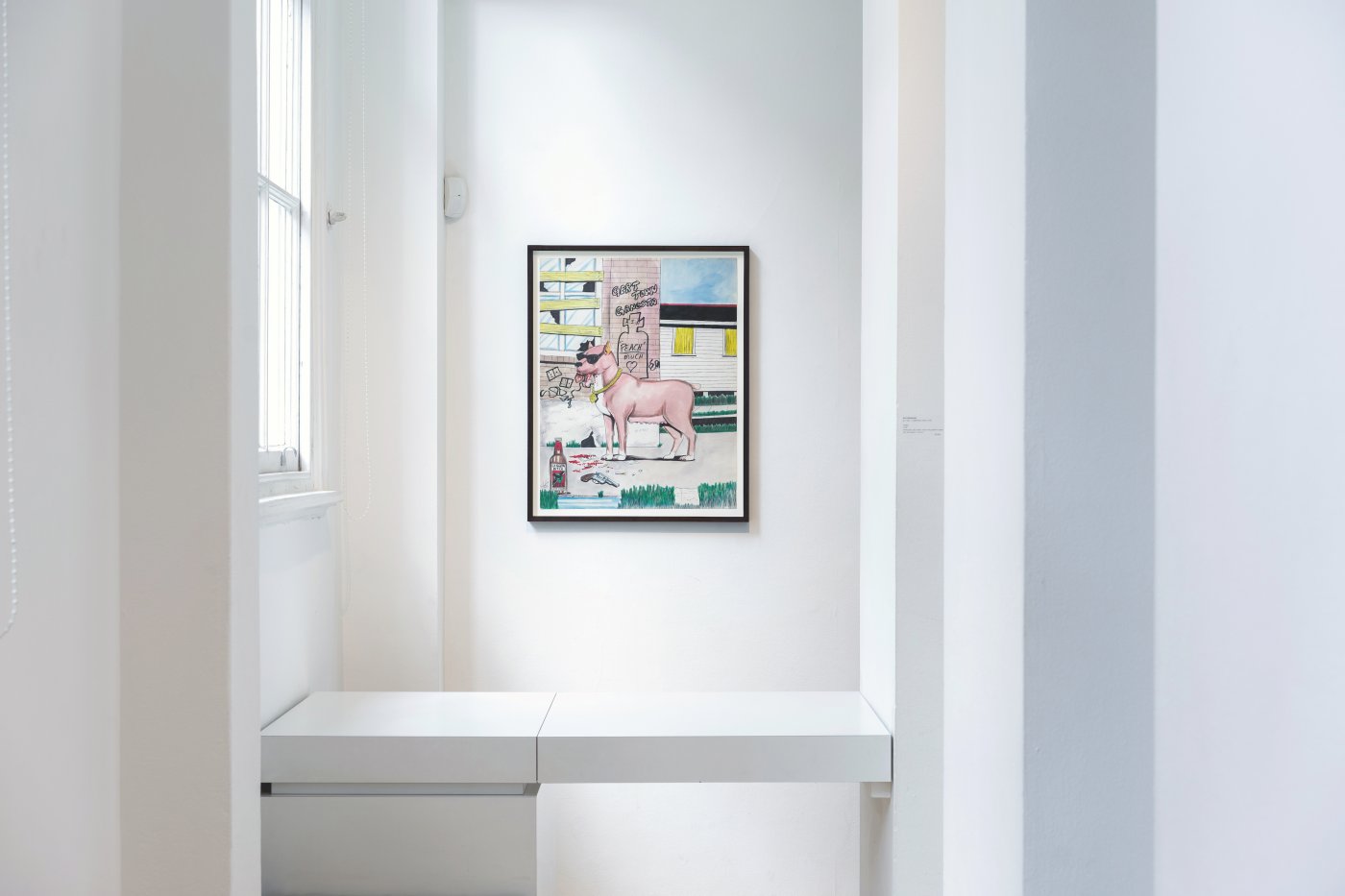 Born Roy Anthony Ferdinand, Jr., Roy Ferdinand (1959-2004) grew up in New Orleans’ Gert Town neighbourhood and attended Warren Easton Senior High School, but dropped out before graduating, and lived most of his life at or below the poverty line. He began drawing as a boy, but it wasn’t until his mid-twenties, after he’d spent a few years running with a local street gang and then working as a mall security guard, that Ferdinand decided to dedicate his life to art. Without any formal training and using poster board and inexpensive art supplies purchased at his local K&B drug store, he drew fantasy and sci-fi figures. But his conversations in the late 1980s with New Orleans dealer Andy Antippas, whose Barristers Gallery was showing the work of several Southern self-taught artists, inspired the young man to make pictures of the daily life that surrounded him, including the brutal flare-ups of violence that defined New Orleans’ poorest neighbourhoods. As he later reflected in an interview, “I realized then that there were hundreds of subjects all around me, the ‘black experience’…basically, our world.”

Before his death from cancer at forty-five, the world that Roy Ferdinand created through a body of more than two thousand works was made up of equal parts documentary and mythification. His largest group of pictures serve as an ongoing report on what he periodically referred to as the “black urban warrior myth,” wherein political and economic pressures on Black men in impoverished urban spaces brought forth violence and hyper-masculinity. The toll of these dual forces can be read on the faces of his enraged and/or anguished protagonists, who march indifferently into the crux of the sordid and deadly narrative of drugs, gangs, prostitutes, car-jackings, drive-by shootings, firearms, cops, and prison. Appearing less often than their gun- slinging and bullet-ridden male counterparts, his objectified and degraded women also brandish deadly weapons, but they just as aggressively use their sexuality to entice, barter, or to defy the viewer — all of Ferdinand’s subjects stare you down — to pass judgement on them. In an interview, Ferdinand described the conditions around him as “so common that to a degree I’ve been desensitised to it,” and he often visited fresh crime scenes around his neighbourhood, accumulating a collection of Do Not Cross police tape in the course of his research.

Not all of Ferdinand’s works are grounded in violence, nor was it always the central event of his compositions, but the grinding poverty is all-pervasive. Keenly aware of the political aspect of the conditions around him, Ferdinand dutifully recorded the activities of folks who were leading uneventful lives: someone reading a newspaper or napping on the porch, a minister performing a baptism, or two restaurant workers having a cigarette break. He also made numerous self-portraits, often wearing an oversized Soviet Red Star medallion and always facing the viewer directly, as the dispirited but unfaltering recorder of modern life. Even when wearing his politics or his obsession with violence on his sleeve, Ferdinand’s most notable gifts as an artist were a remarkable ability to reveal his subjects’ mind-frame through a single detail or gesture, and his uncanny gift for documenting, with unerring simplicity, the unique architecture of New Orleans’ shotgun houses, street corners, and tree-lined horizons.

Ferdinand’s impact on New Orleans’ contemporary art scene was fast and profound, beginning with regular Barristers shows and a 1991 exhibition in the lobby of the Contemporary Arts Center, which writer D. Eric Bookhardt described at the time as “outsider art of a sort most people are not quite prepared to handle,” while noting that Ferdinand’s harshest pictures weren’t even in the show. The renowned artist Willie Birch, remarked that “Roy’s work frightens a lot of people, but he was one of the artists I feel closest to in terms of trying to say something about our existence.”

Since his death, Ferdinand’s work has been increasingly collected and exhibited around the U.S., including in the 2008 Prospect.1 New Orleans Triennial, where a selection of his drawings was organized by New York dealer Martina Batan (1958-2021), whose later involvement with Ferdinand’s art was the subject of the documentary, Missing People (2015) by David Shapiro. Ferdinand’s work is in the permanent collections of, among others, the New Orleans Museum of Art, Crystal Bridges Museum of American Art (Bentonville, AR), the Speed Museum (Louisville, KY), the Pérez Art Museum (Miami) and the Ogden Museum of Southern Art (New Orleans), which will present a survey exhibition of the artist’s work in 2023.