“my paintings convey a felt perception of life, an awareness of the history of art, and a clear expression of my passion and sense of spirituality. I sense a visual music that externalizes what I feel within me and in the air”
– Ronnie Landfield 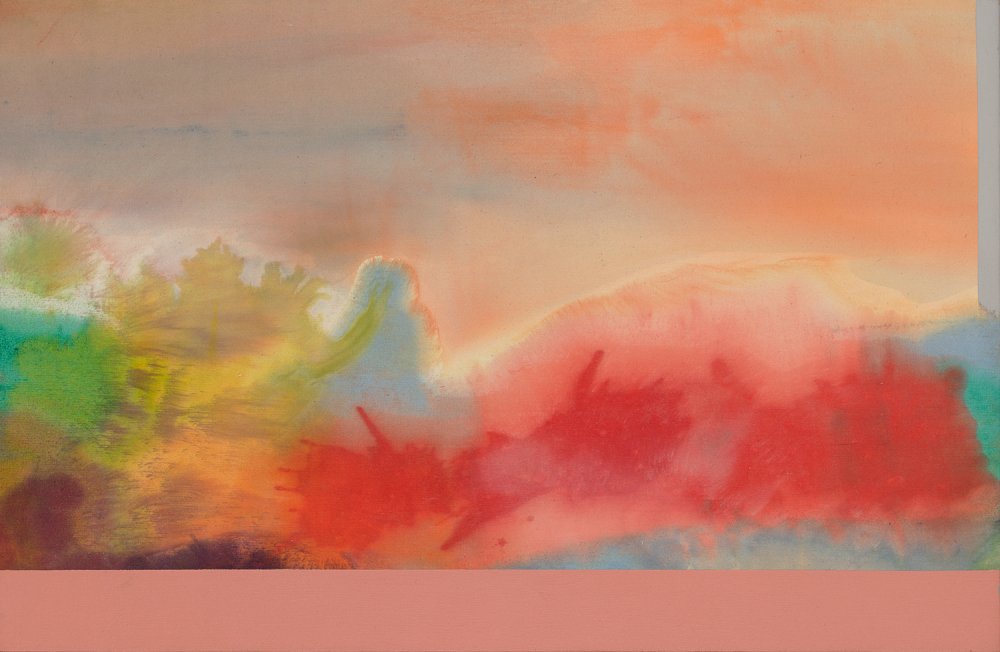 Ronnie Landfield
In the Mist, 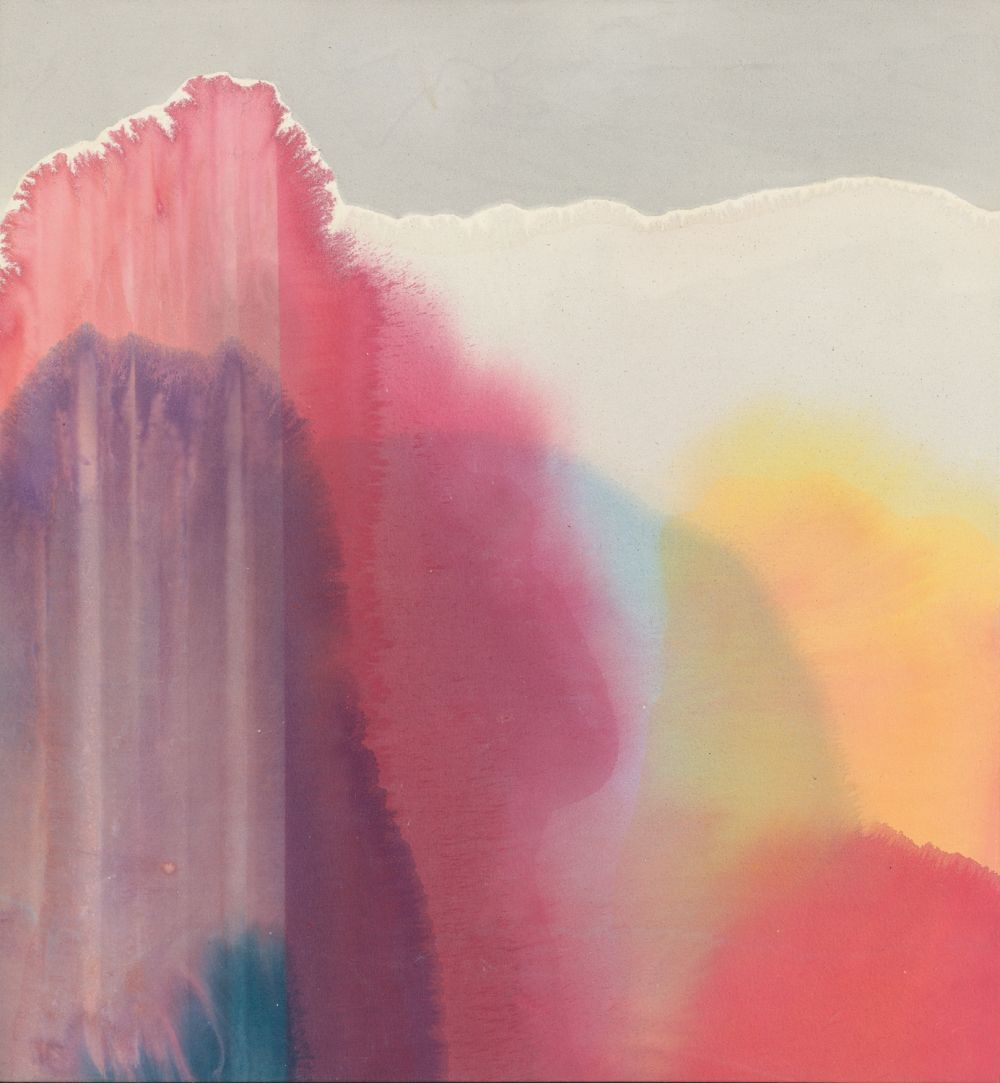 Ronnie Landfield
In the Smoke, 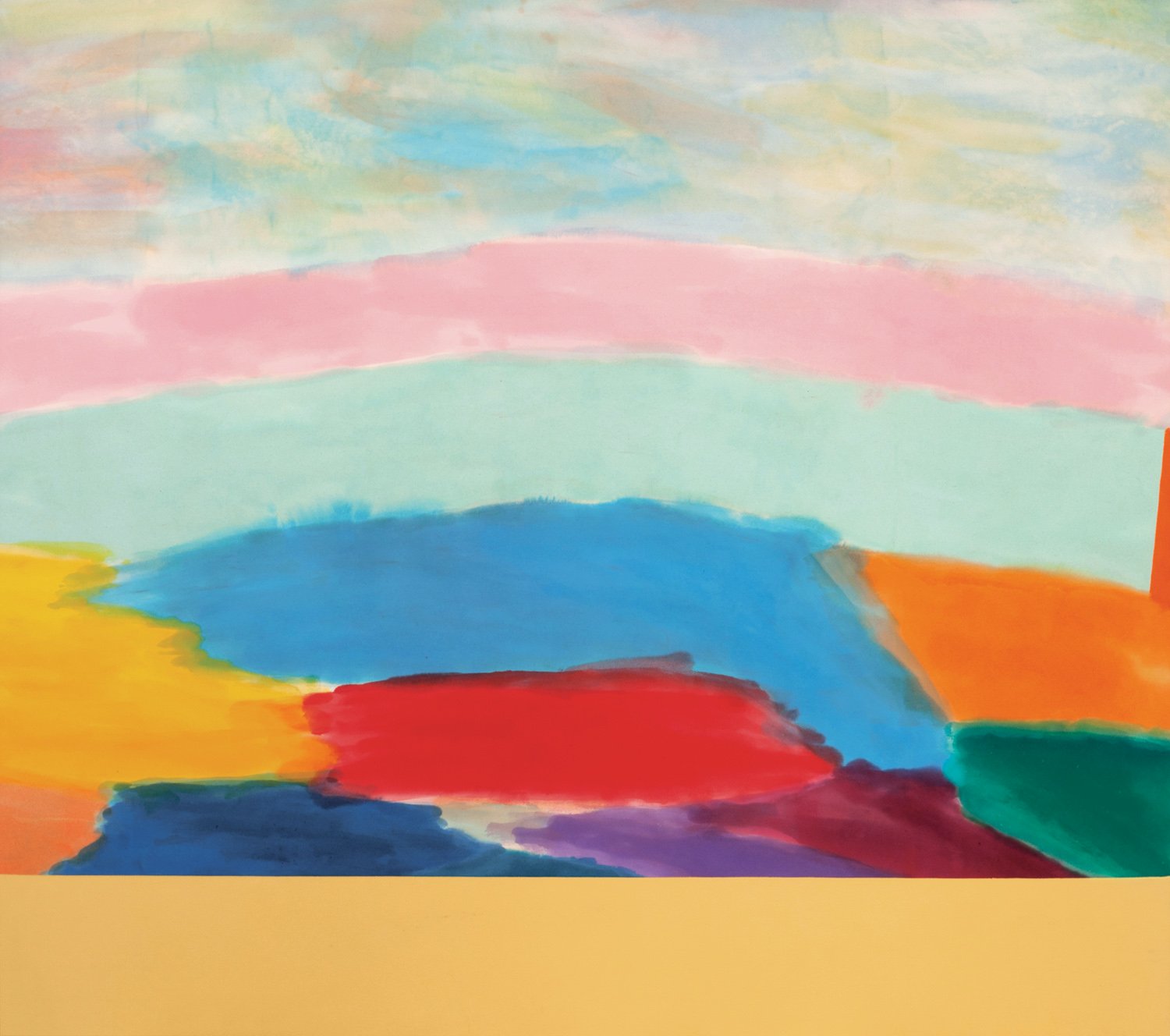 Ronnie Landfield
View From The Heart, 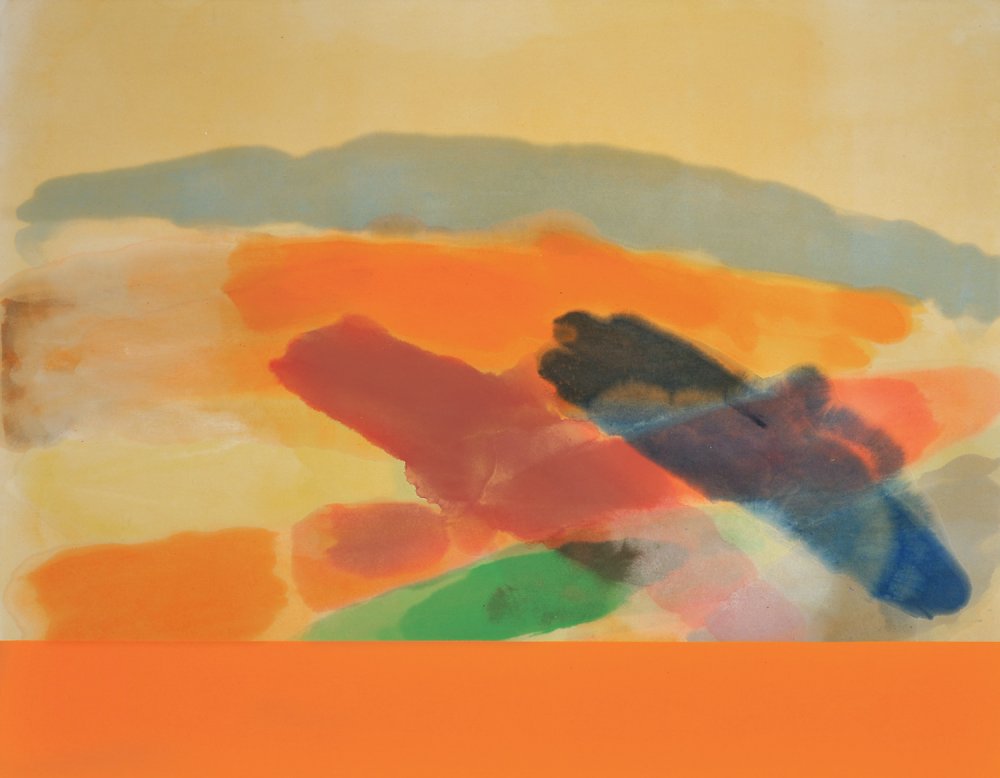 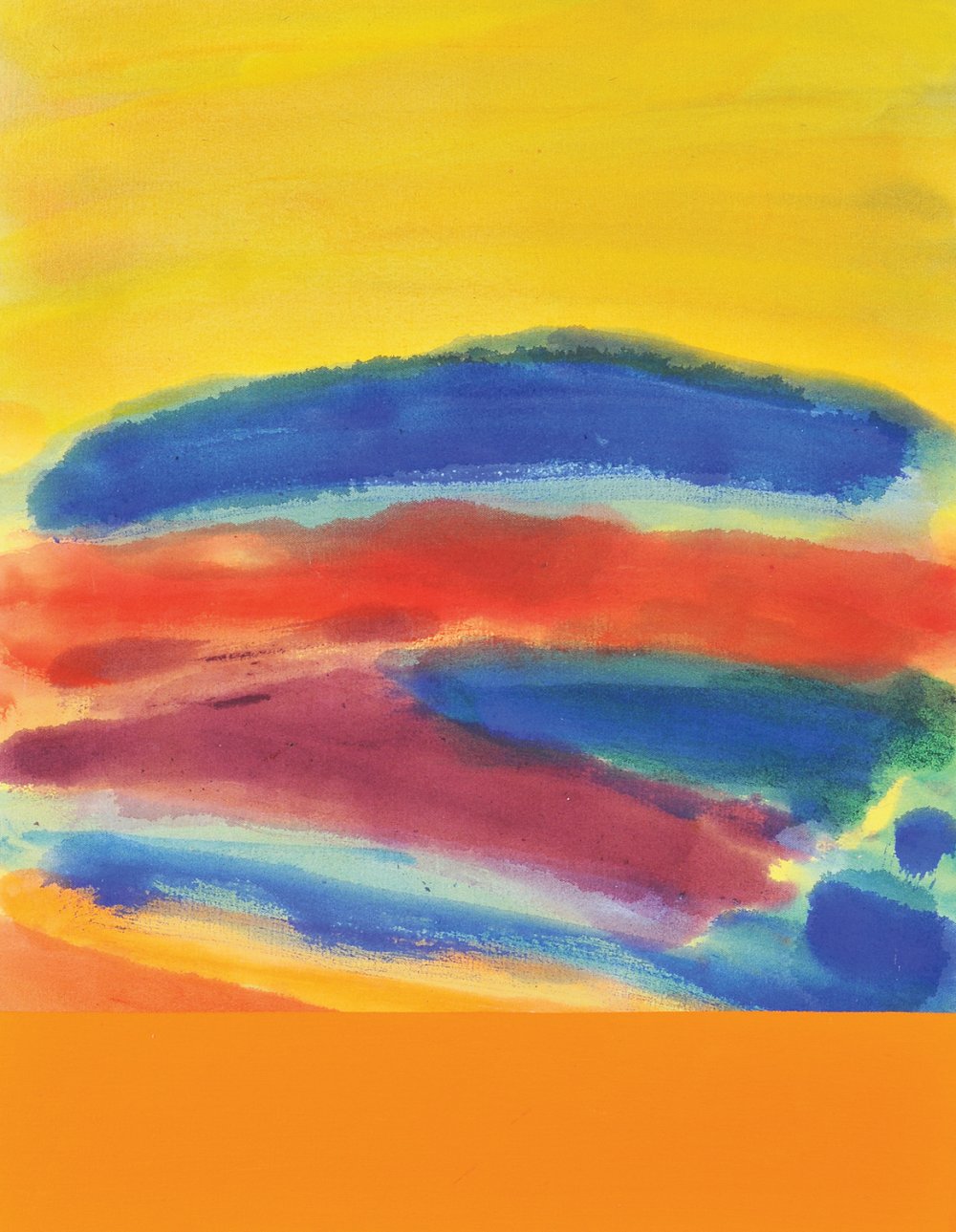 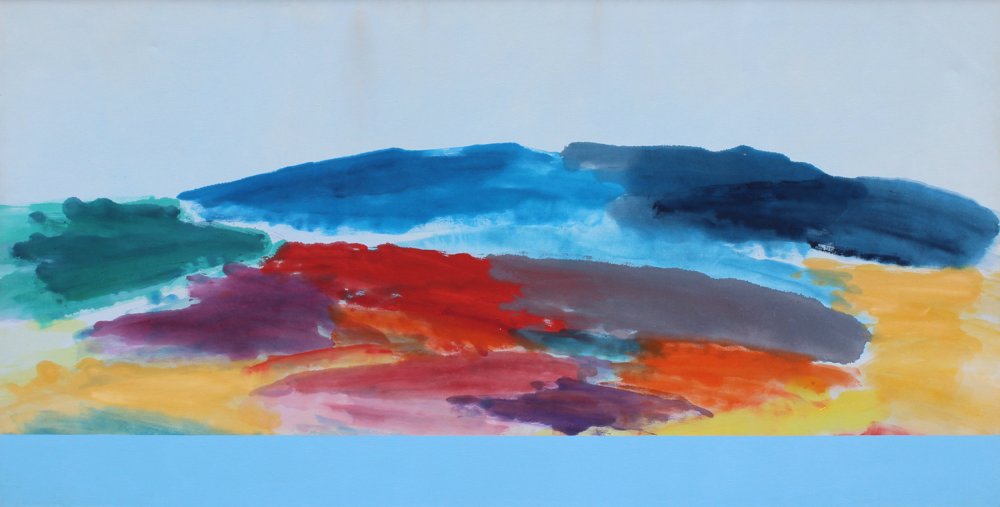 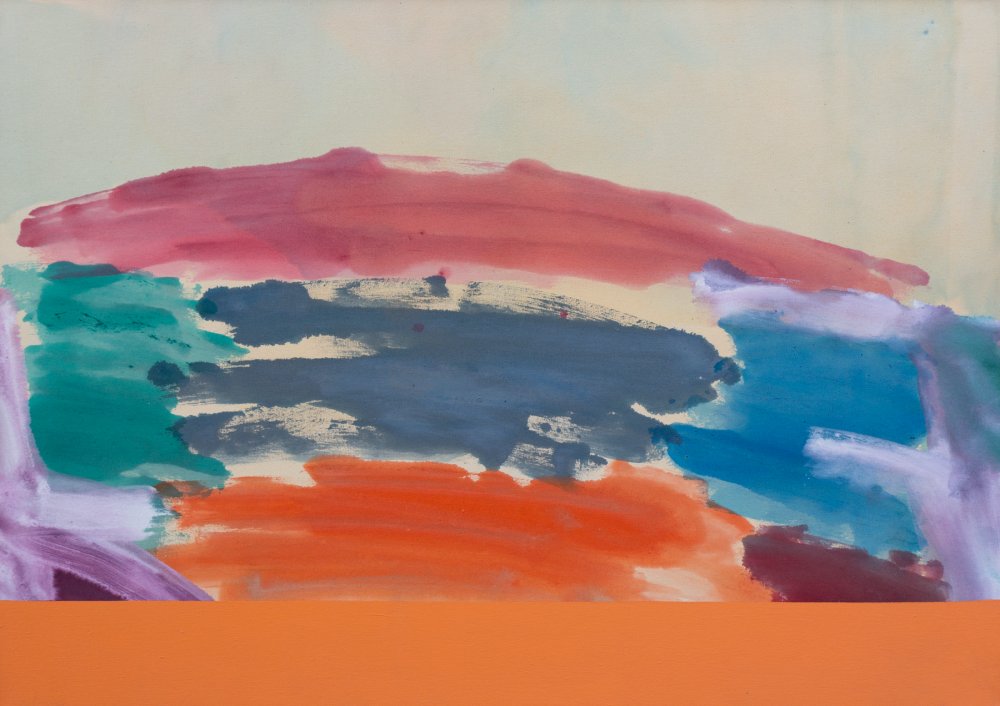 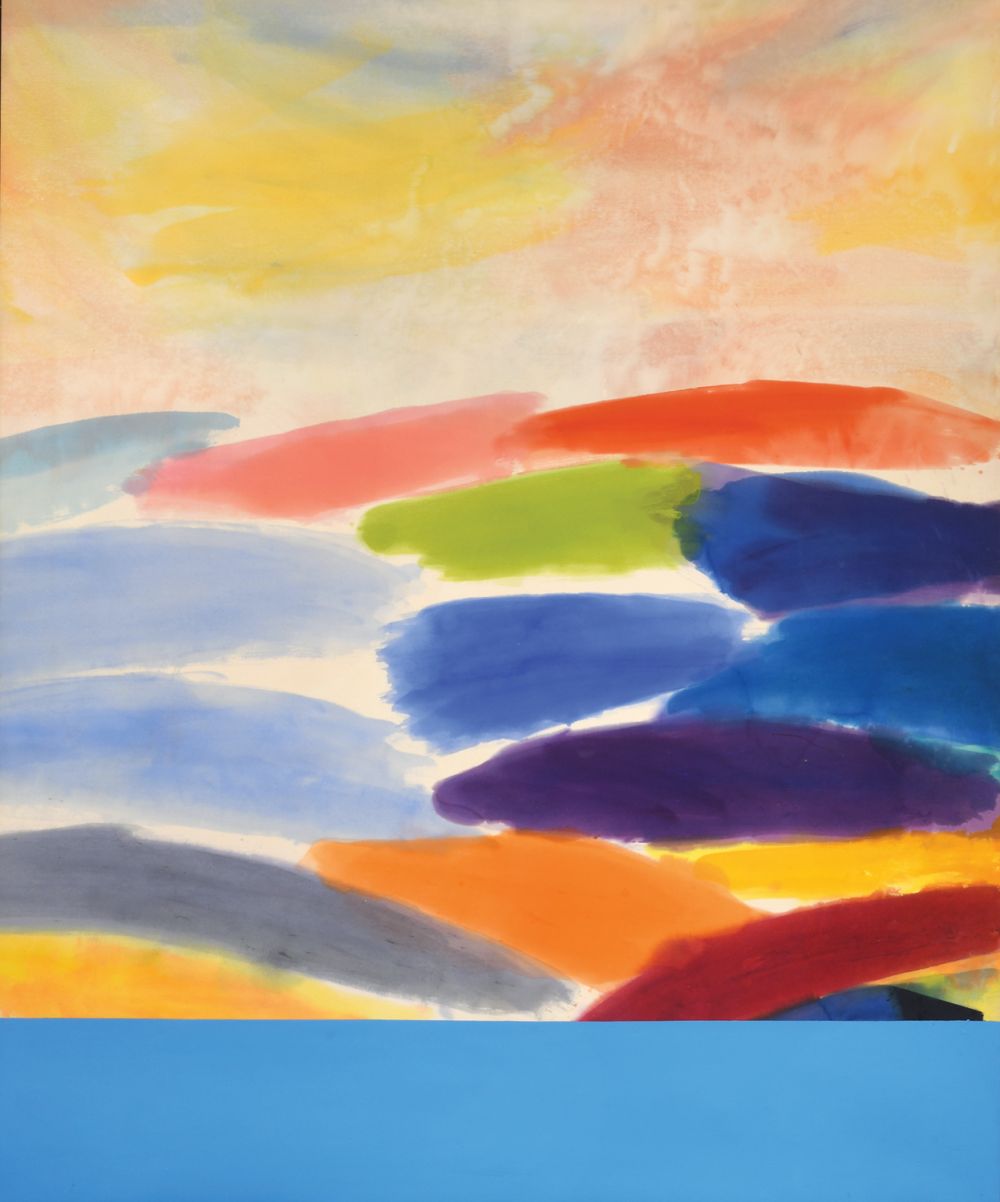 Ronnie Landfield
We walked all the way, 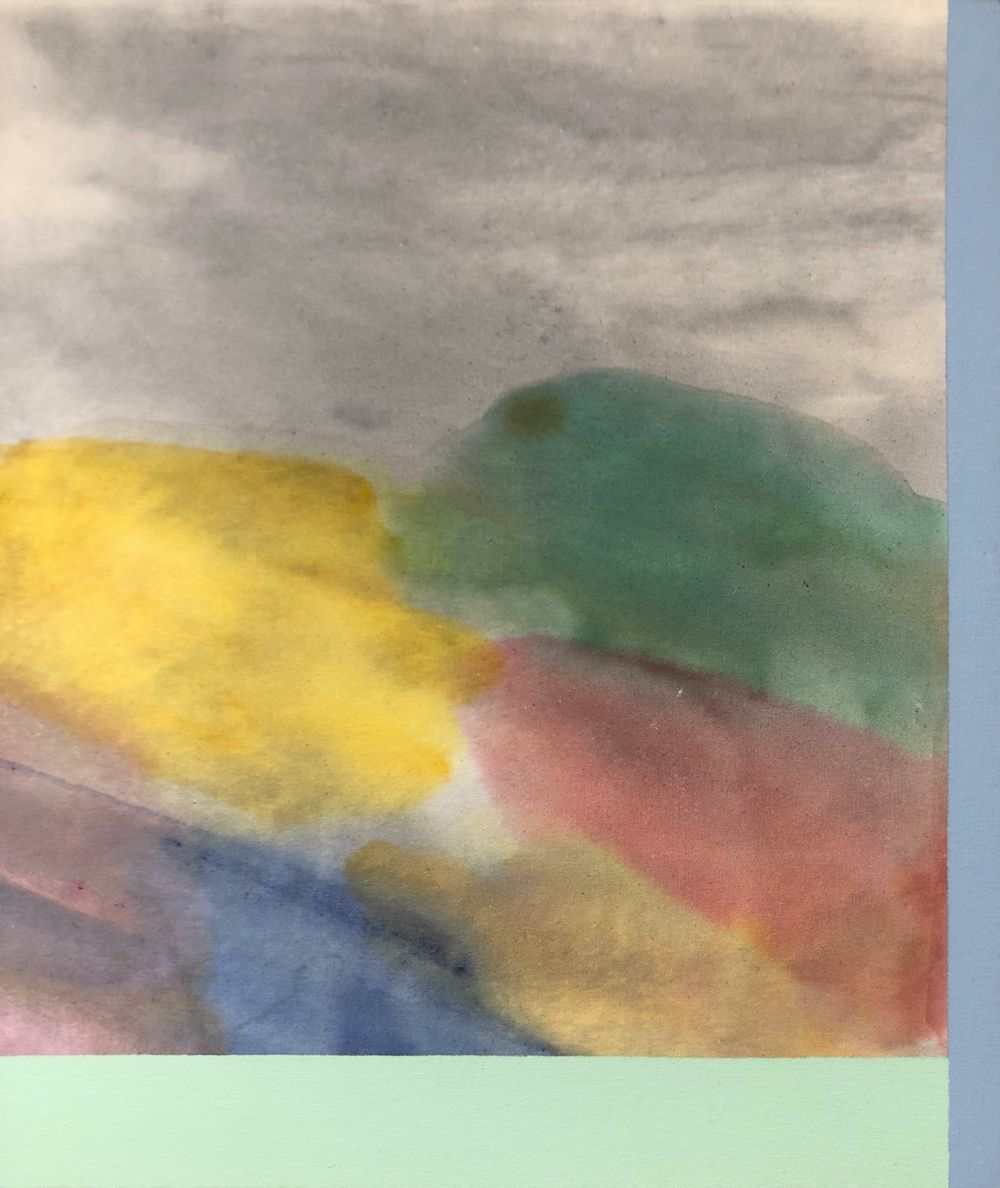 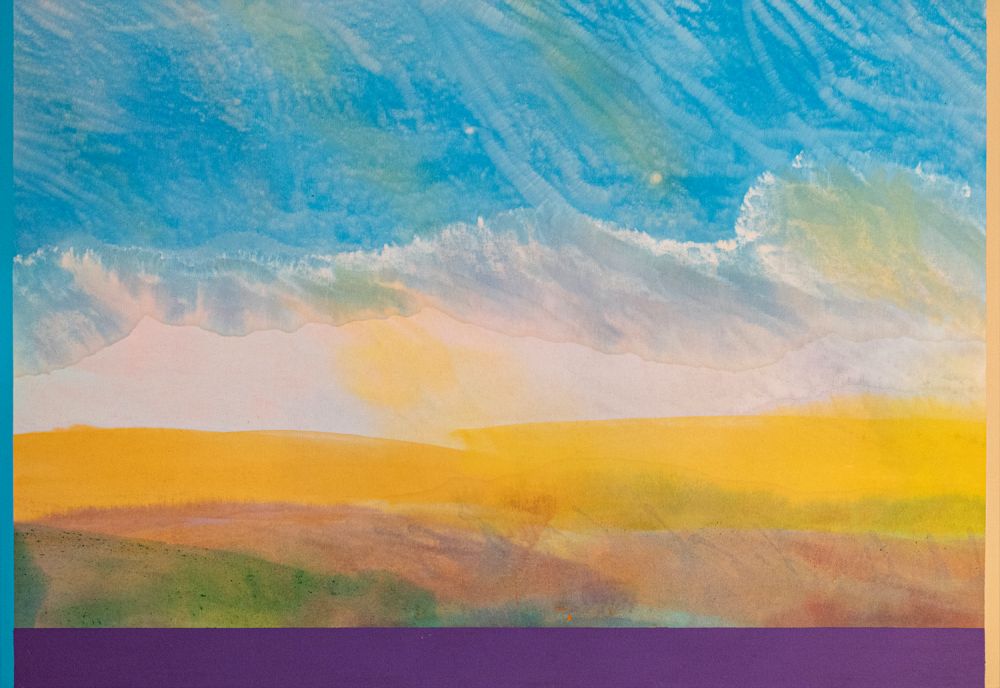 Ronnie Landfield
After The Rain, 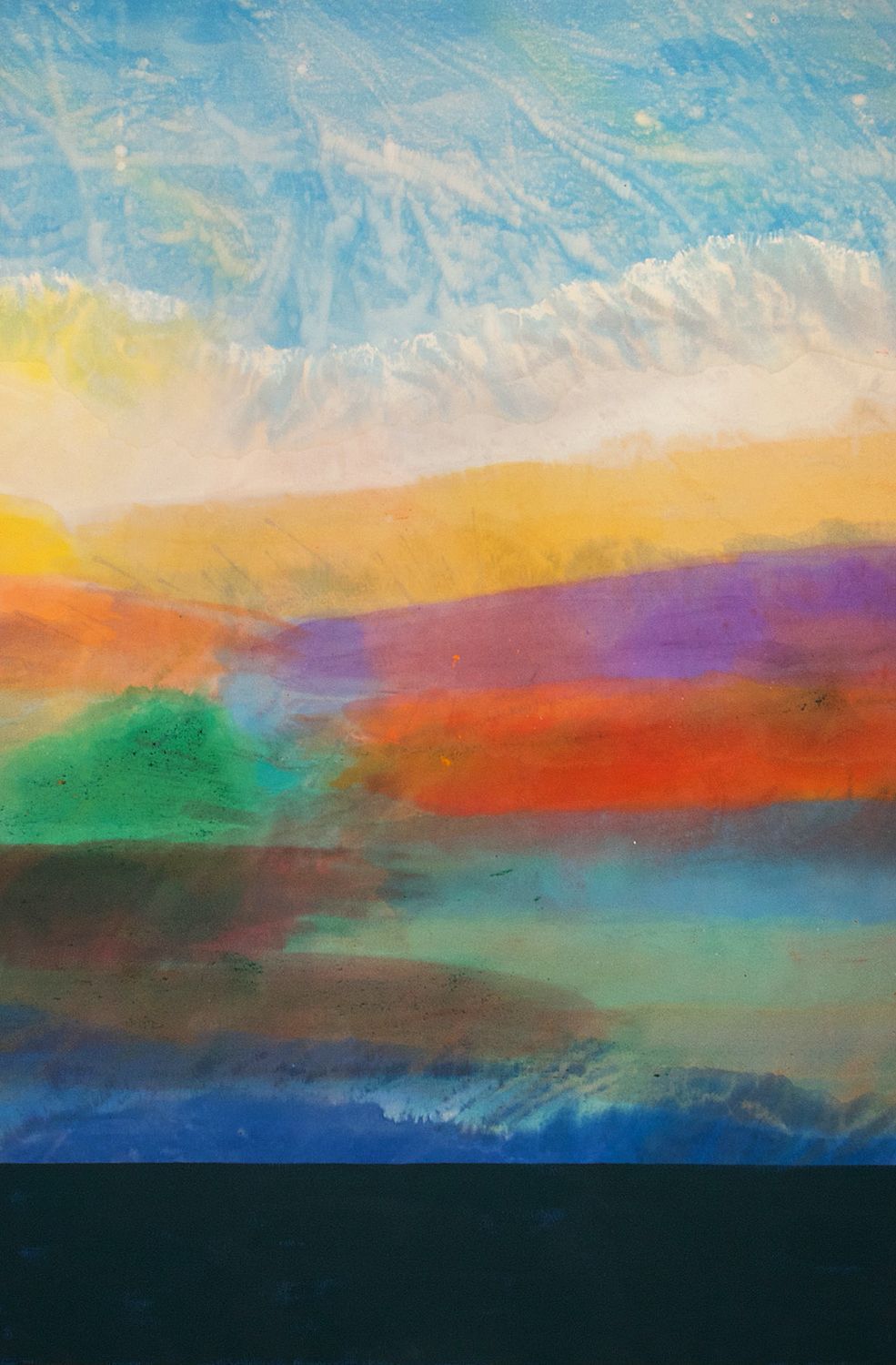 Ronnie Landfield
Late In The Day, 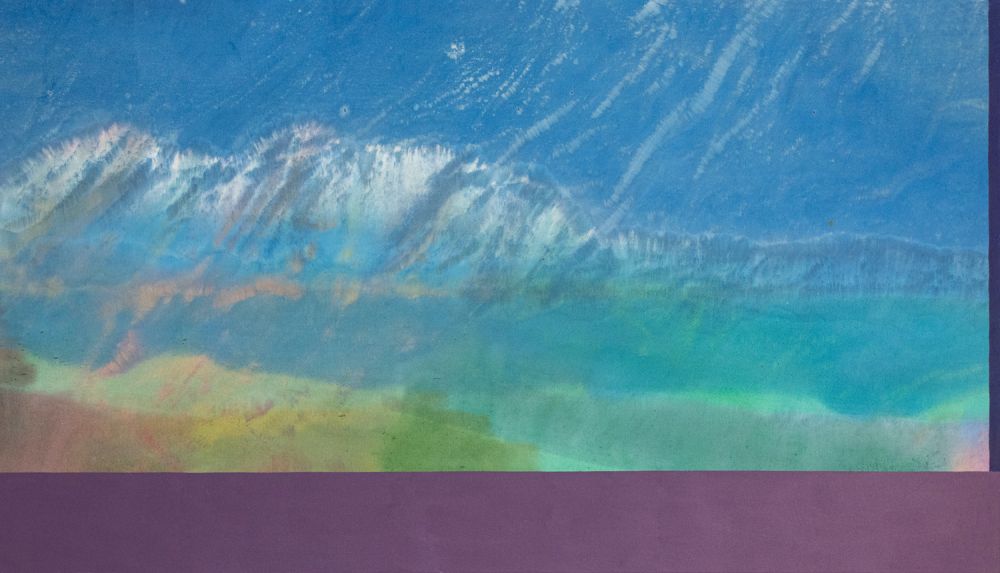 RONNIE LANDFIELD
b. 1947
As a young boy, growing up in New York City, Landfield would visit the Avant Garde galleries of the time, taking in the abstract expressionists’ work such as Jackson Pollock, Ad Reinhardt and Willem de Kooning. In a reaction to the all-over, process-oriented abstraction of the midcentury, Landfield painted his abstractions from nature, incorporating the horizon as he used random effects of pouring and staining.
In the beginning, Landfield would study painting by visiting important museum and gallery exhibitions in New York City during the early 1960s and by taking painting and drawing classes at the Art Students League of New York and also in Woodstock, New York. As a student at the High School of Art and Design on 57th Street in Manhattan, Landfield would visit the galleries and museums almost on a daily basis. He studied composition, illustration and design at Art and Design and graduated from the High School of Art and Design in June 1963. He was then later accepted to the Cooper Union, Pratt Institute, and the Kansas City Art Institute where he given a full scholarship.
Landfield studied at the Kansas City Art Institute, the San Francisco Art Institute and The Art Students League in New York. He began exhibiting his work in New York City in 1962 at the Rodale Theater on E. 4th Street in the East Village of Manhattan. Many of his closest friends were art students and together, they enjoyed taking life-drawing classes at the Art Students League or the Village Art Center while also visiting the galleries and museums along 57th Street and Madison Avenue, or on Tenth Street in the East Village. They would also paint together on weekends in Central Park and the Bronx Botanical Gardens.
In 1963, disenchanted with school yet, determined to just paint, Landfield returned to New York City where his abstract expressionist oil paintings took on hard-edge’s and large painterly shapes. He showed his work to Stephen Greene, an instructor at the Art Students League, who harshly criticized the work informing Landfield that he ‘needed to find his own voice’. Landfield states, “I was determined to take his advice and do something new, and original in painting.”
In 1964, Landfield traveled to Berkeley, California where he then settled and began painting hard-edge abstractions primarily with acrylic paint. He briefly returned to school that summer and attended the University of California, Berkeley summer session while afterwards continuing as a fulltime student at the San Francisco Art Institute. That following year in 1965, Landfield returned back to New York City permanently where he experimented with minimal art, sculpture, hard-edge geometric painting, found objects, and initially began a series of large-scale mystical, minimalist border paintings.

In 1966, due to a fire, Landfield residence was burned down leaving him devastated, yet driven to where draw dozens of new plans for paintings and sculptures. He decided to reach out to Philip Johnson, a famous architect, and initially coordinated a meeting with him in which Landfield found the architect both encouraging and inspiring toward his paintings in which he then began showing Johnson on a regular basis. After receiving a job as a commercial artist for an advertising agency, he returned to painting and, later that year, completed The Border Painting Series. Soon after, Philip Johnson then acquired from Landfield the painting Tan Painting for the permanent collection of The Sheldon Memorial Art Gallery in Lincoln, Nebraska making Johnson, according to Landfield, his “first important patron”.
It was during 1966 and 1968 that Landfield began to exhibit his paintings and works on paper in important galleries and museums; one being at the Whitney Museum of American Art where, at 20 years old, he was included in the Whitney’s biennials of 1969 and 1973. During this time, he found himself experimenting with rollers, staining, hard-edge borders, and painting unstretched on the floor for the first time in which he initially moved away from Minimalism and Hard-edge painting to Lyrical Abstraction. In 1966 and 1967, Landfield’s minimal works that were related to The Border Painting Series, were included in numerous group exhibitions. Additionally, the painting The Howl of Terror was included in the 1967 Whitney Museum of American Art’s Annual Exhibition which, in turn, represented Landfield’s “public break” with Minimal Art, and his move toward Lyrical Abstraction.
From 1967 to 1968, two of Landfield’s drawings were reproduced by the Letter Edged in Black Press for a series of portfolios assembled in protest of the Vietnam War known as, S.M.S. III. Landfield was later included in a portfolio of prints published by Tanglewood Press titled New York 10 1969, in addition, to being mentioned in an important article in Newsweek magazine about the new generation of artists, which featured a color reproduction of his painting Cheat River. During 1968 and 1969, after having created his first abstract landscape painting Heaven and Earth, Landfield exhibited in the inaugural exhibition of the Studio Museum in Harlem, as well as, several group exhibitions at the Baltimore Museum of Art, the Stanford University Museum of Art, and the Whitney Museum of American Art’s 1969 Annual Exhibition amongst other places.
In 1969, Landfield was awarded a Copley Foundation (Cassandra) Grant for Painting whilst, in the same year, holding his first one-man exhibition in which the works included in the exhibition, as well as, the works from that period in time, were all partially inspired by the Sung Dynasty Chinese Landscape painting. However, it was the abstract landscapes of 1968 and 1969, and what followed, that constitute Landfield’s most original and most important contributions to the history of contemporary painting. During the late 1960s through the early 1970s, he was included in important exhibitions all over the country including at the Museum of Modern Art and the first Whitney Biennial in 1973.
Today, Landfield’s work is in the Metropolitan Museum of Art, the Museum of Modern Art, the Whitney Museum of American Art, the Art Institute of Chicago, and other important public institutions. Findlay Galleries proudly represents Ronnie Landfield and his lyrical abstractions of which have become icons of the modernist Color field movement.

Ronnie Landfield, one of the greatest living painters, comes out of the color field milieu of New York in the 1960s and maintains its fervent artistic purity. In his work no academic or political theory interferes with the soul’s straightforward and age-old expression through art. Free from preconceived ideas of what and how to paint, he finds beauty in color and form, with love and generosity. Upholding the autonomous and emotive powers of painting, Landfield offers experience both deep and uplifting.
There is something else here. These abstract compositions look like landscapes and skies as seen by the artist. With this, his saturated colorism brings to mind the avant-gardes of the 19th century. But his works don’t suffer the modern accommodations of landscape paintings heightened by abstract form, or of abstractions eased up by landscape references. Landfields are both abstractions and landscapes of the highest intensity, separately and at the same time, in the same space. This is unique.
– Dana Gordon, 2020 ( Delicious Line )

Set aflame by the preternatural glow of his palette, Landfield’s levitating forms are often anchored by an opaque band of color that runs horizontally across the bottom edge of the canvas and by thin, vertical zips that frame its sides. These hard edges declare the artist’s ongoing engagement with the Minimalist paintings of his youth. For however they may inspire spiritual reflection, Landfield’s mystical mindscapes are first and foremost about painting. Besides lending gravity to the artist’s diaphanous acrylic veils, the bars underscore the environmental consciousness that has been ever present in Landfield’s work.
– Ara Osterweil, 2020 (Art Forum)