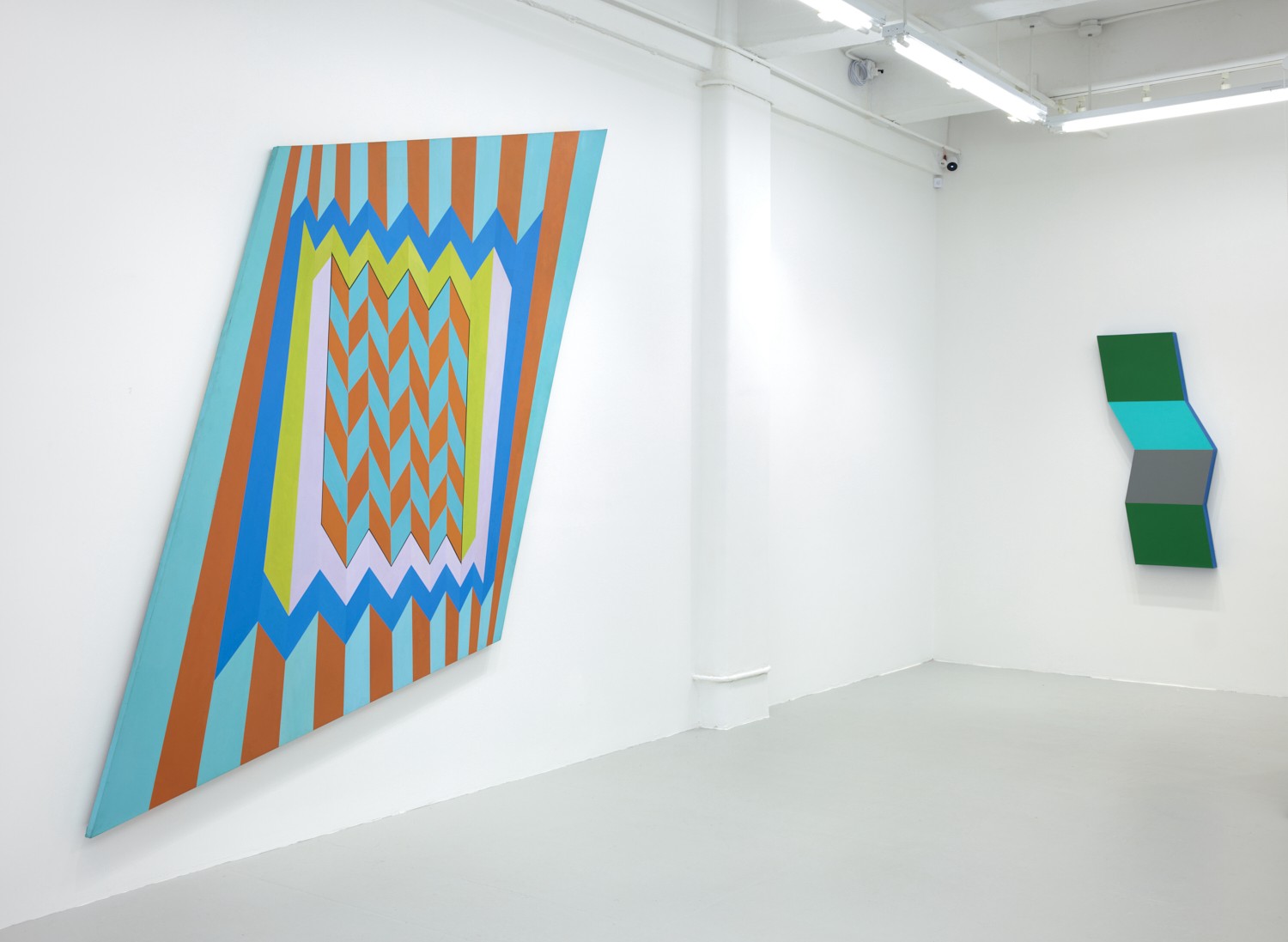 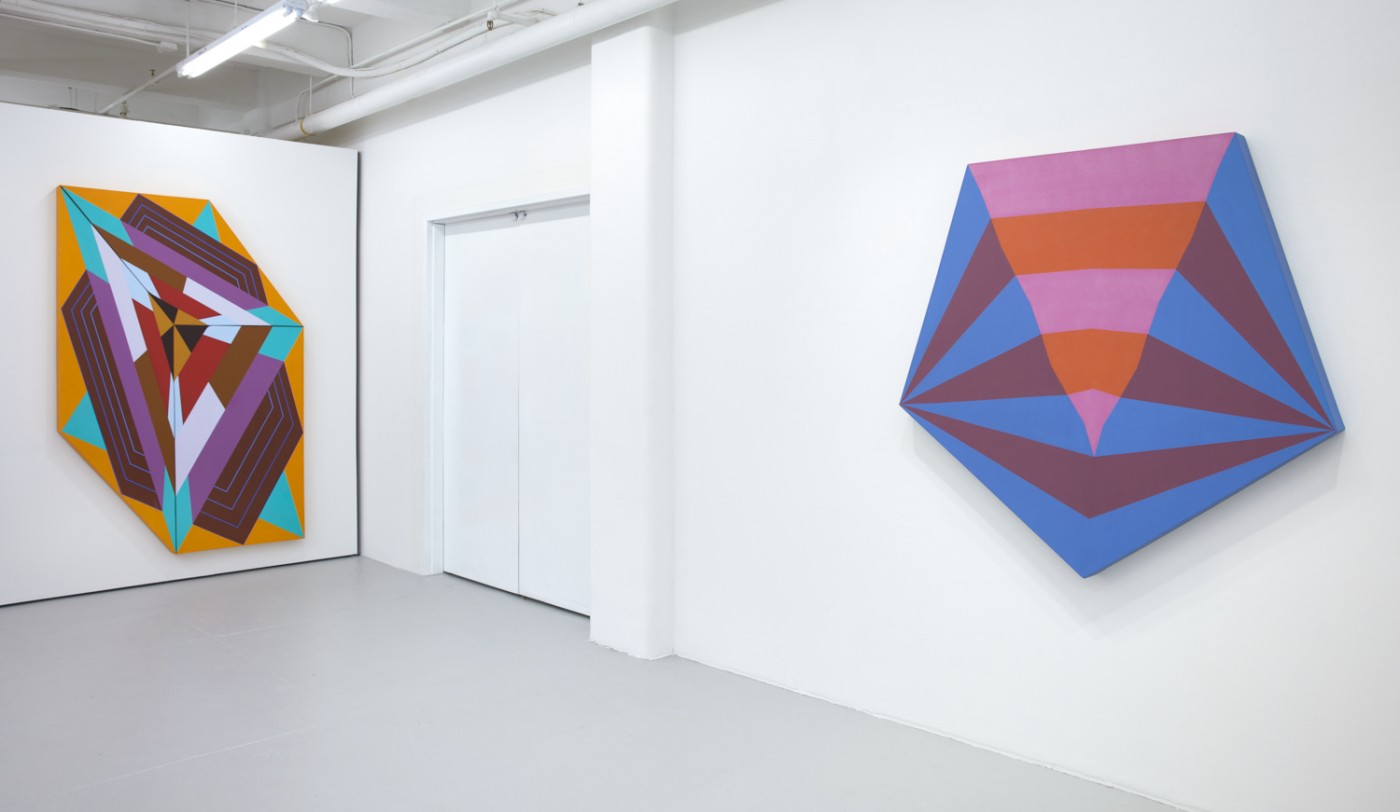 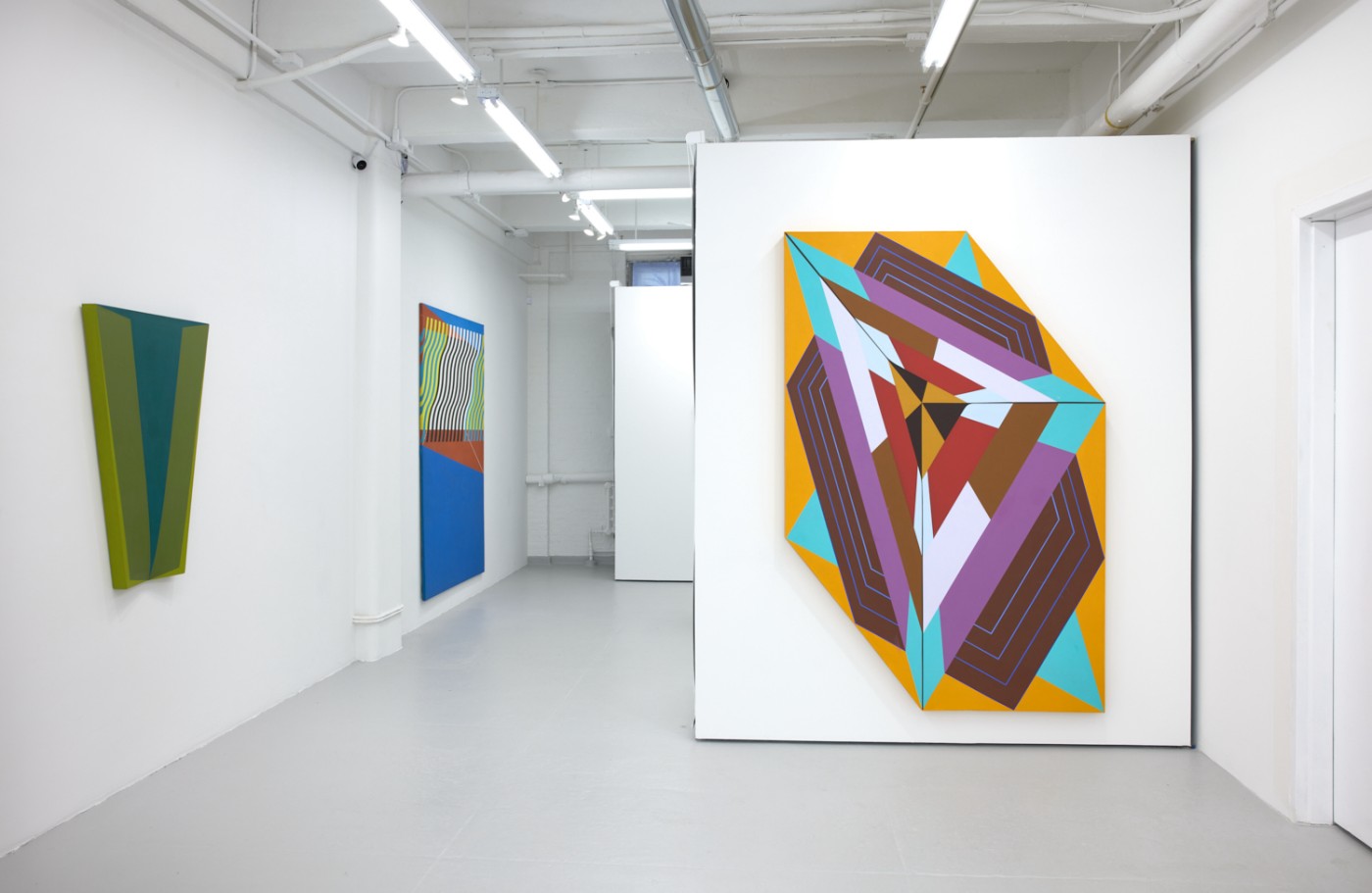 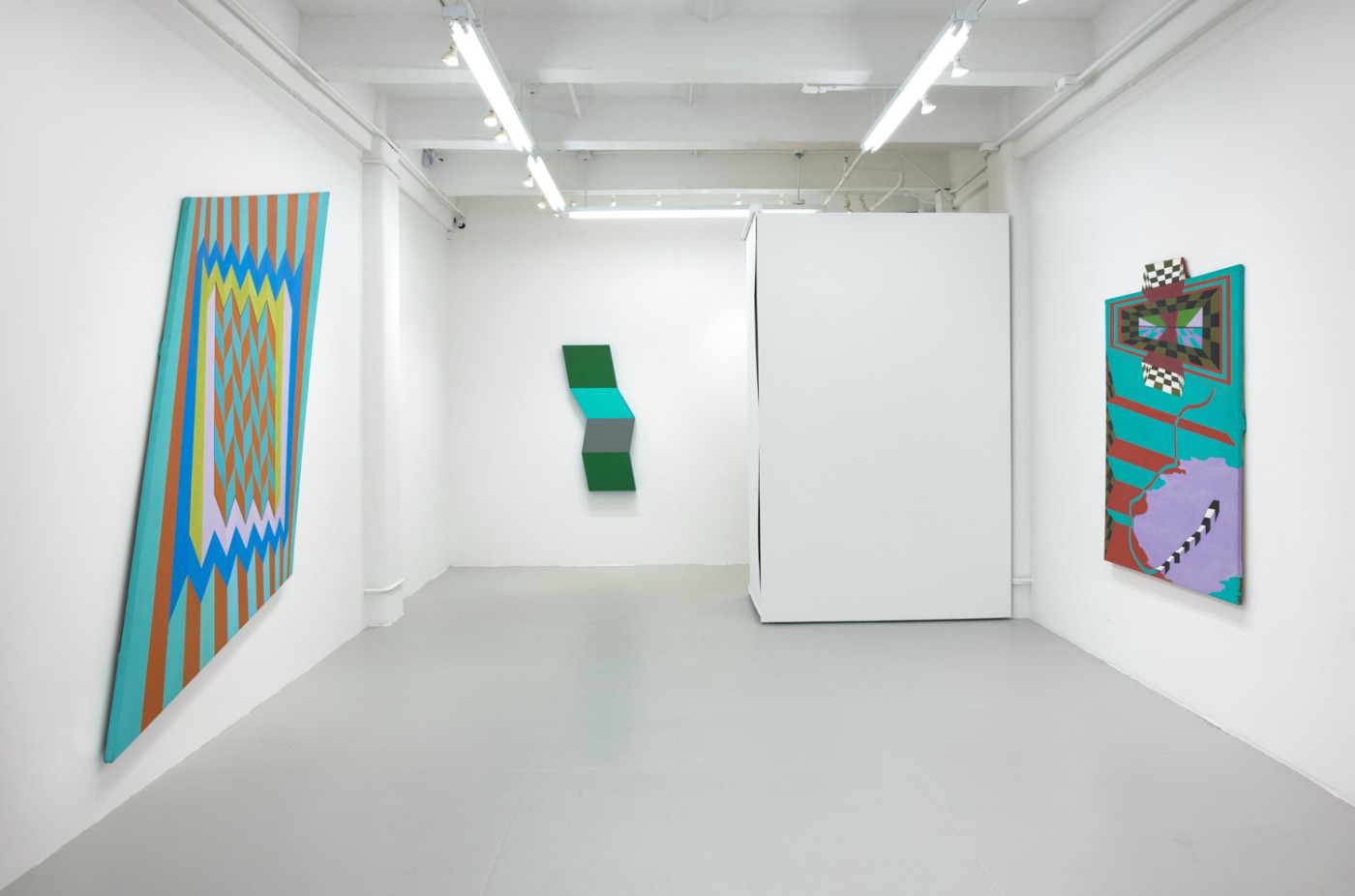 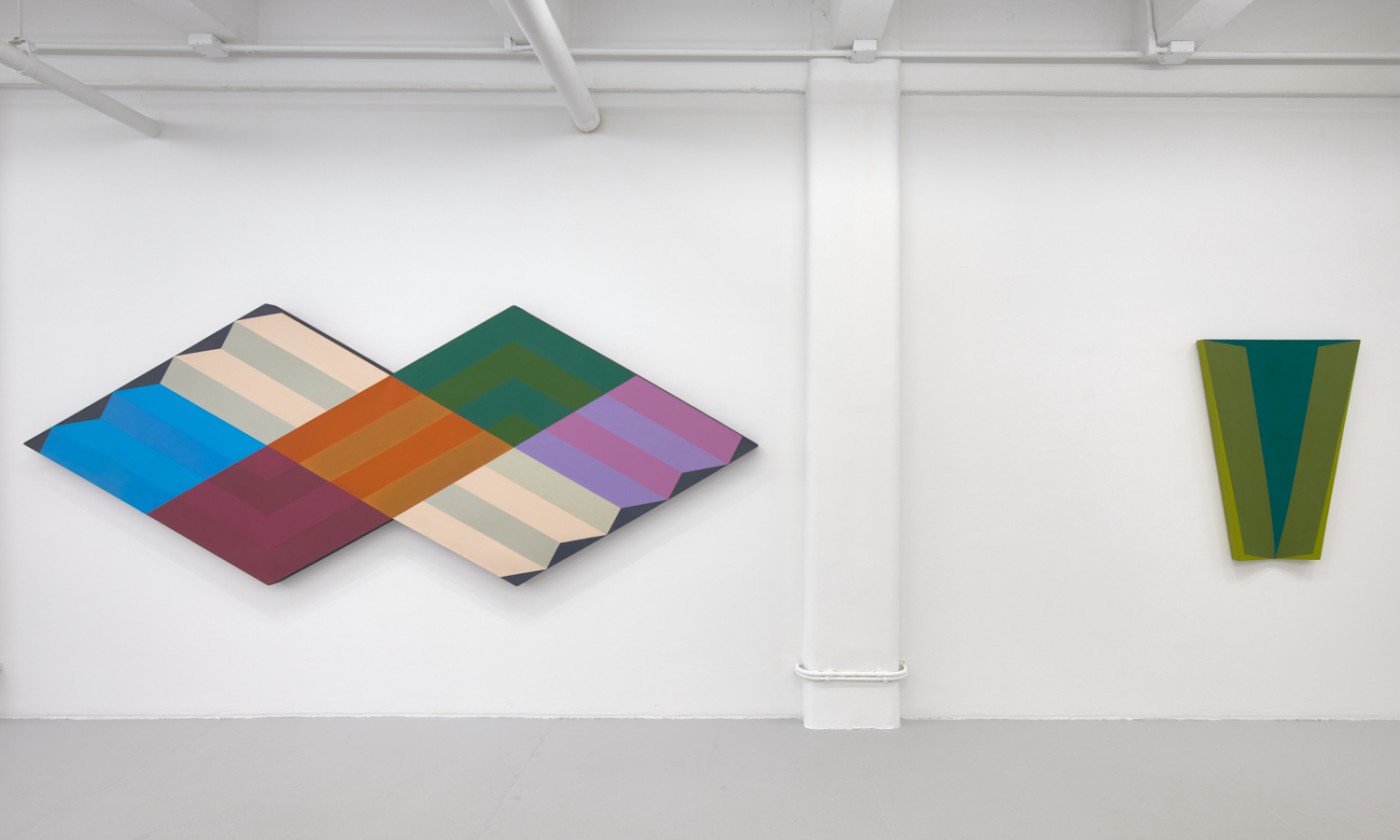 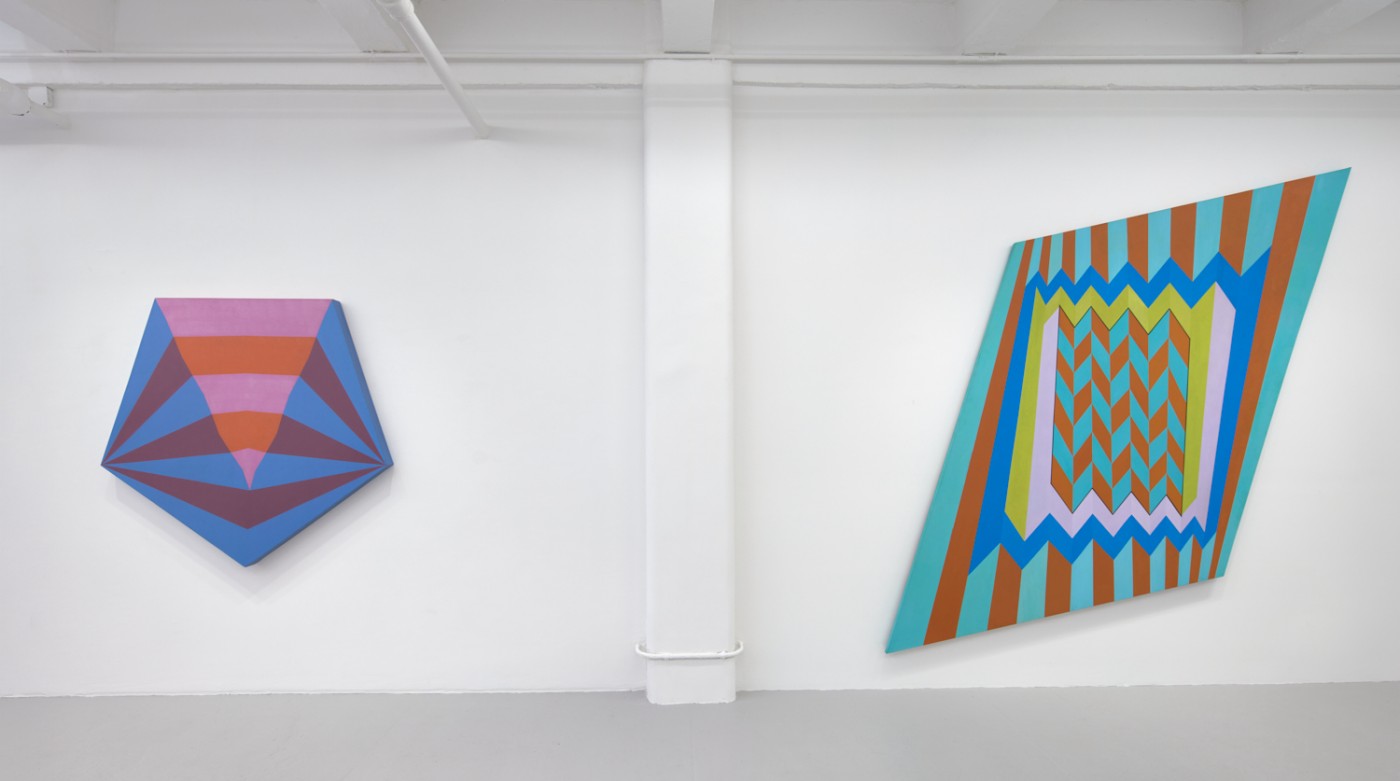 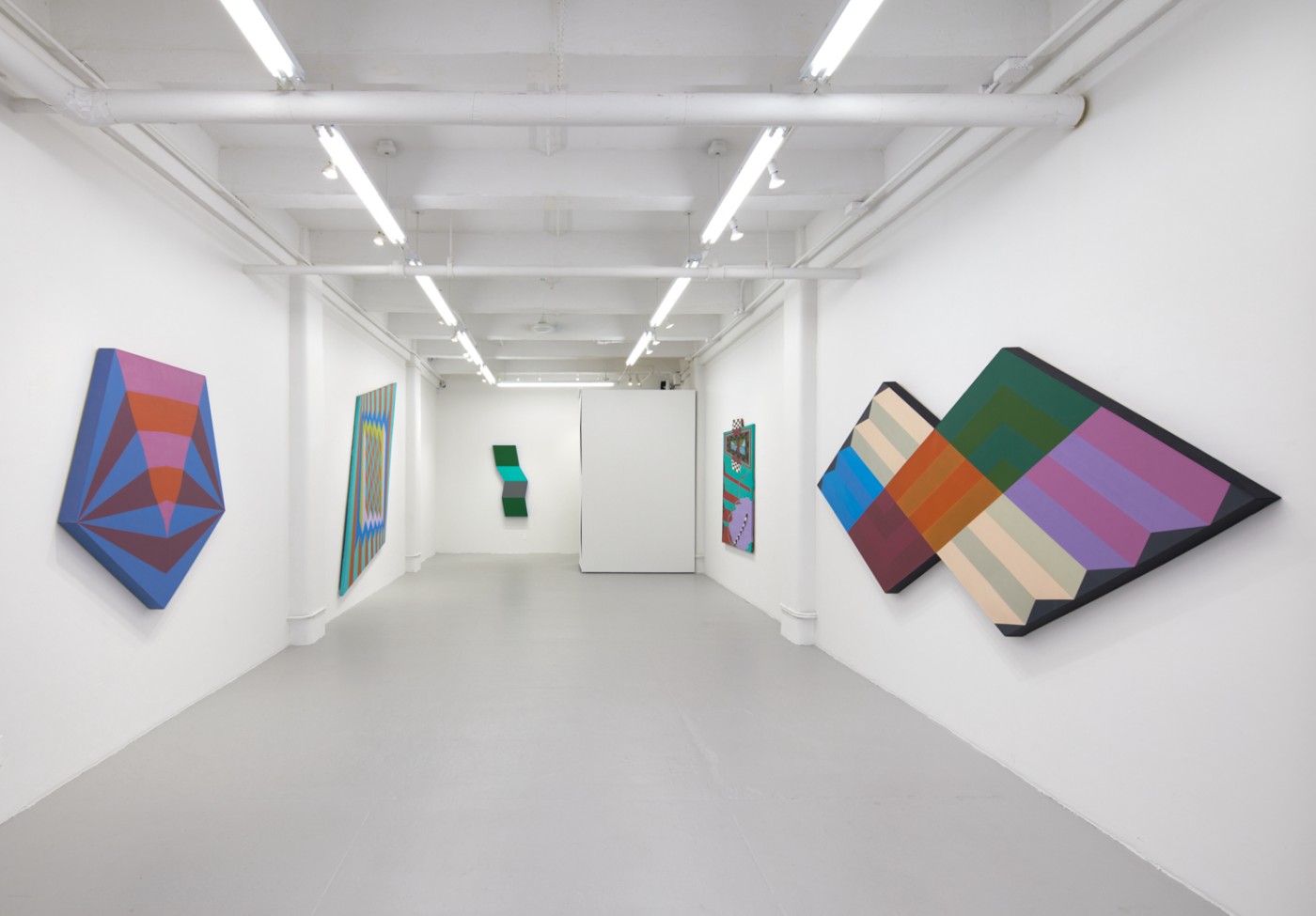 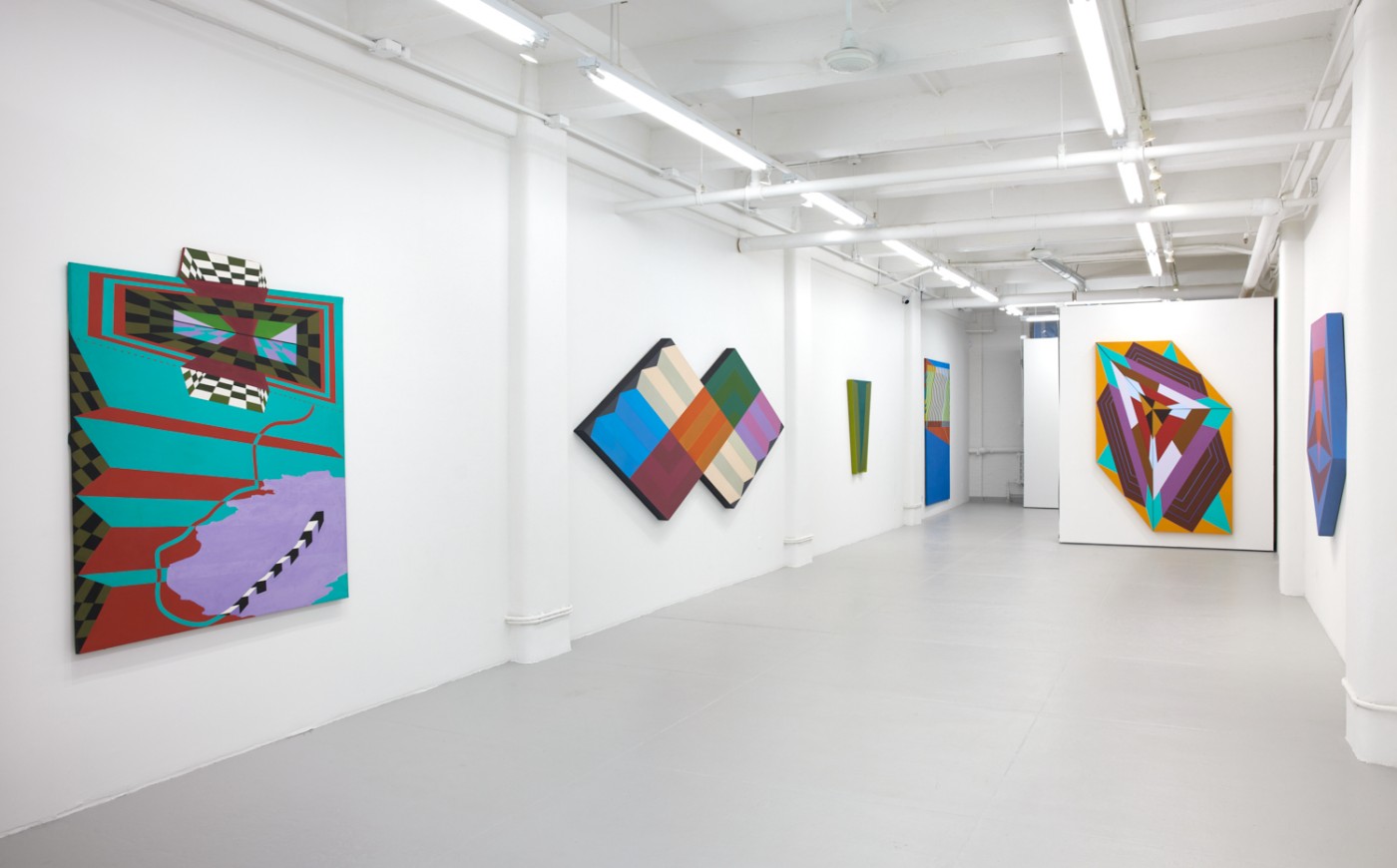 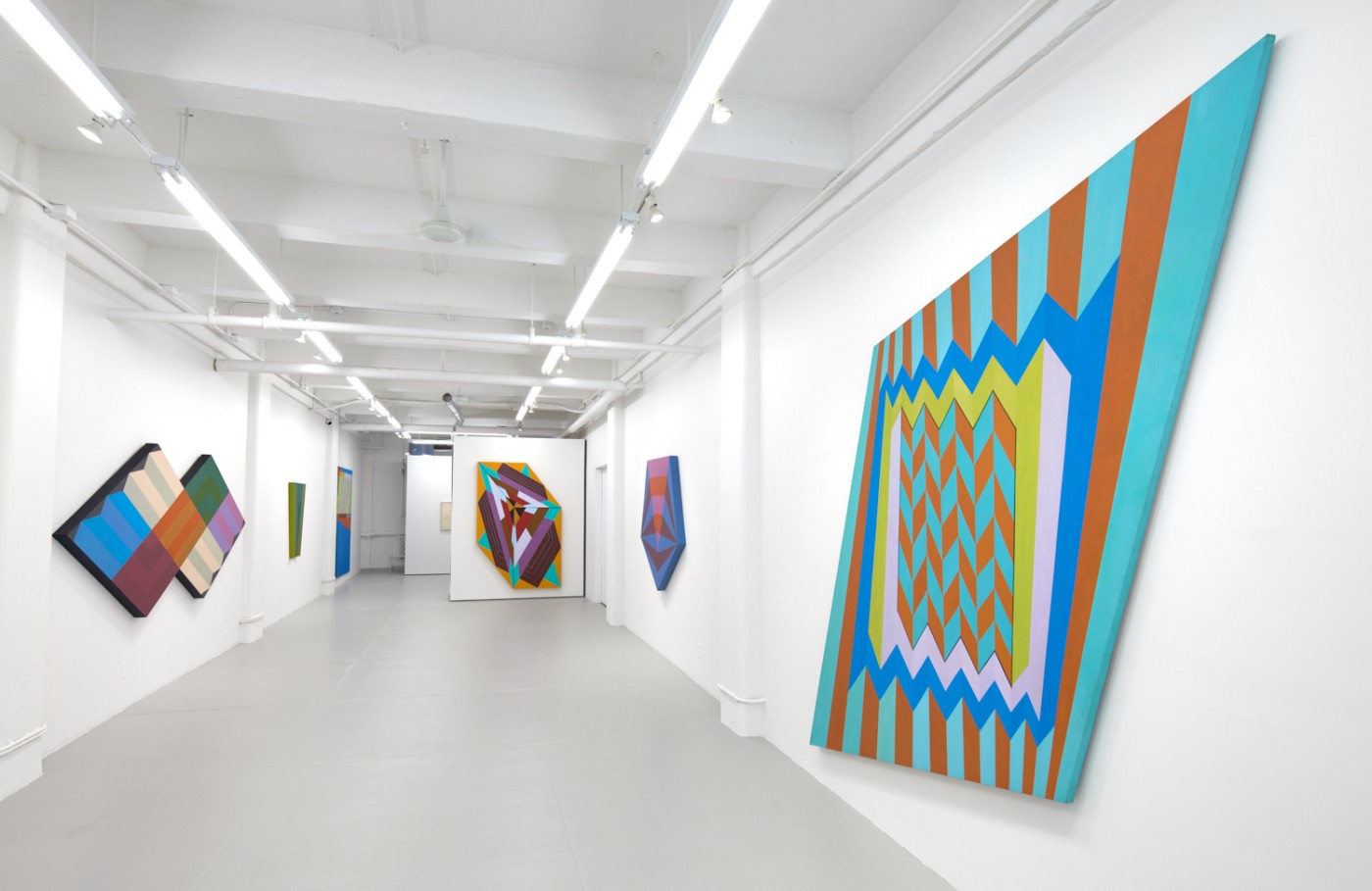 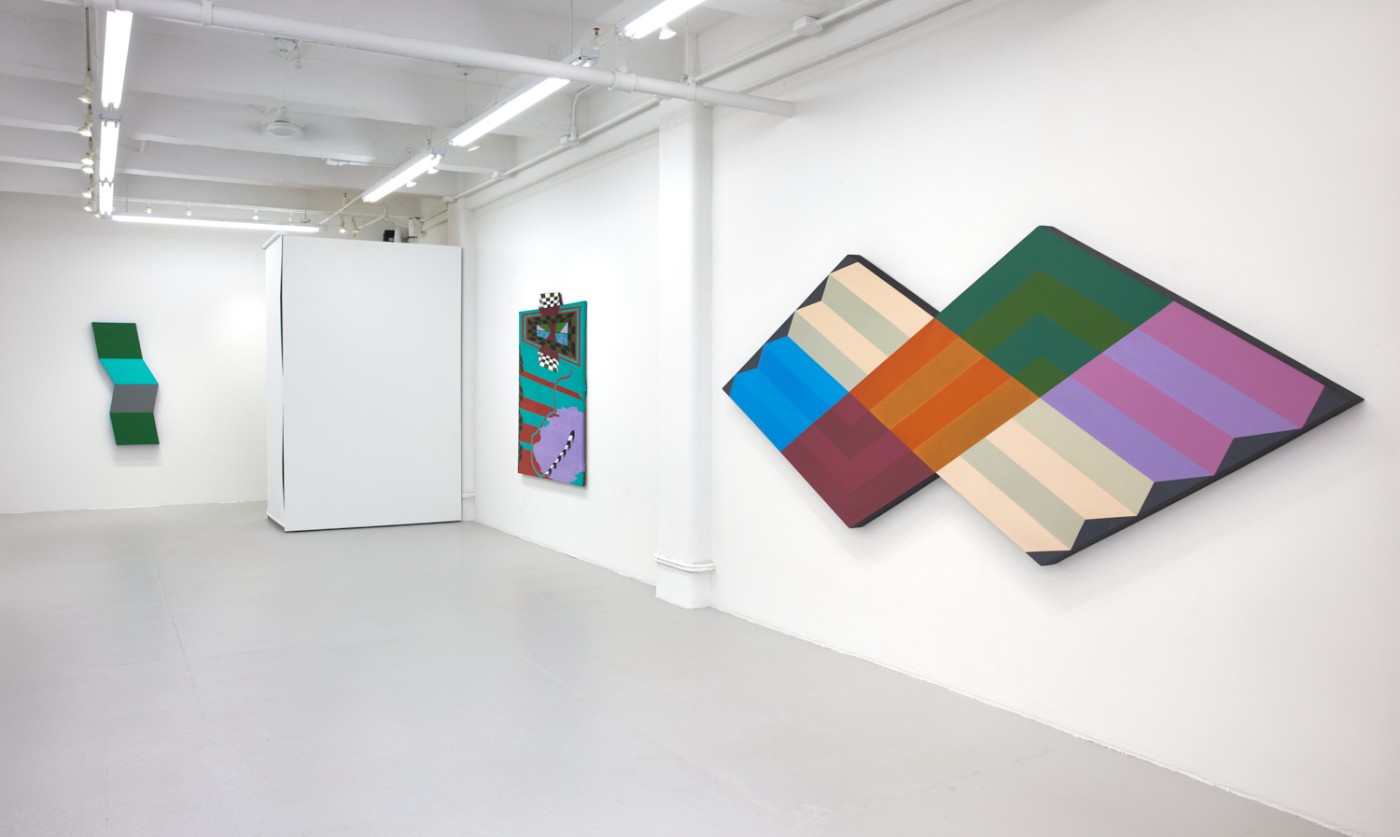 This presentation includes 7 geometric, hard-edge, and color-based abstract paintings from 1963 to 1965, all acrylic on canvas and created in California, and 4 drawings from 1966, 1975 and 1977. Together, these paintings and drawings map Davis’s early explorations of illusory space and optical effects in the two-dimensional picture plane: starting from the early 1960s paintings in this exhibition and minimalist monochrome paintings from 1965; to his very well-known large scale shaped dodecagons, cubes and slab cast resin paintings (1966-1972); then to the perspectival Snapline (1975 – 1978) and geometric Floater (1978 – 1979) series, both acrylic paint on canvas.

In the early 1960s, Davis was fresh out of his studies at the Art Institute of San Francisco, heavily influenced by Jackson Pollock, Clyfford Still and expressionism, he wanted to find his own voice and visual language. Stating that he “strove to expand the boundaries of painting, not the boundaries of what was then becoming art” (1), he did so by focusing on extreme vector geometry, potent color interactions, and optical effects. More specifically, Davis stated, “I set up tensions in my paintings; between the flatness of the canvas and the illusion of the depicted abstract objects; between the painterly and the hard edge; between color and color; between light and shadow. These paintings attempt to probe the dimensions of time and space, while not existing in time at all, the whole artwork being viewable in an instant.” (2) The combination of dualities and internal tensions within each painting resulted in imagery expanding (literally) and popping (figuratively) out of a traditional square or rectangular picture plane and into shaped perimeters that gave the illusion of rectangular boxes, pentagons, parallelograms, diamonds, and bent planks, each protruding off the wall. Such illusions became an easy leap to painting much larger, intensely optical imagery leveraging three-point perspective in cast polyester resin, protruding canvases, encaustic on shaped wood supports, expanded PVC, and canvases in various shapes and sizes.

Other than Dr. Zig Wig, 1964, which was exhibited at Stanford University in 1964, none of the other paintings have ever been presented publicly until now. The painting Hexagon Block, 1965, has a back label from the Nicholas Wilder Gallery in Los Angeles, where Davis was first represented and the year of his first solo show with Wilder. Hexagon Block, 1965 was discussed and image included in an essay written by Barbara Rose for the exhibition “A New Aesthetic” that she organized for the Washington Gallery of Modern Art in Washington D.C. in 1967.

Ronald Davis, a multidisciplinary artist always inspired by visual arts and music, has explored abstraction during his 7-decade career through: painting on canvas, with pigment imbedded in polyester resin, on expanded PVC, wood, and paper as well as drawing, sculpture, three-dimensional computer modeling, digital painting, and music. His visual compositions have consistently utilized geometry and hard edge painting combined with intense color interactions, chromatic relationships and extreme vanishing point perspective to create internal tensions on supports that are bound within the two-dimensional picture plane, while the imagery painted on the surface suggests three-dimensional space that creates compelling optical effects and the illusion of literal objects rather than a picture of an object.

Influenced early on by: Abstract Expressionist painters Jackson Pollock, Clyfford Still, and Barnett Newman; gestural color painters Morris Louis and Sam Francis; as well as Frank Lobdell and Elmer Bischoff while studying painting at the San Francisco Art Institute from 1960 to 1964, Davis was finding his unique approach and aesthetic. He did not want to follow in the footsteps of the AbEx masters who influenced him, and not certain he could expand upon their prevailing expressionistic style of the time, nor paint “man’s physical limitations.”1 However, Davis stated that he “discovered [he] could paint a stripe. And later, checker-boards. Abstract geometric objects.” He further stated that his “strategy became to do a Mondrian in the style of Jackson Pollock, and a Pollock in the style of Mondrian,” and that his instructor, “Frank Lobdell, emphasized the importance of what you leave out of a painting, not what you put in.” (1) All together, the perfect storm was brewing within Davis, pushing him toward hard edge, geometric painting that helped him see how to push the edge of the pictorial space out of the conventional and into new materials and dimensions, literally with shaped perimeters and cast resin infused with pigment.

In 1964 Davis moved to Los Angeles and had his first solo exhibition with the Nick Wilder Gallery in 1965. He had his first solo show in New York at Tibor de Nagy Gallery in 1966 followed by a solo show at Leo Castelli in 1968. During this seminal period, his painting practice migrated to the large, cast resin and fiberglass paintings produced from from 1966 through 1972, with their extreme perspectival geometry that had flat surfaces while the interior confines of the geometric shapes were painted in a very gestural and expressionistic style, yet the paintings read as a three-dimensional object. In 1967 Michael Fried wrote in ARTFORUM that Davis’s paintings were “at the forefront of his generation. In at least two respects Davis’ work is characteristically Californian: it makes impressive use of new materials — specifically, plastic backed with fiberglass — and it exploits an untrammeled illusionism.” (2) And further, “Davis’ new work achieves an unequivocal identity as painting.” (2) Davis was included in the exhibition “A New Aesthetic” at the Washington Gallery of Modern Art in 1967, organized by Barbara Rose who wrote in the catalog that, “Ron Davis is the single artist in this exhibition who has appropriated the new materials toward the end of painting.” (3) Rose further stated that Davis’s “use of a complex pictorial illusionism relates them to the tradition of easel painting, rather than to the new literalist objects.” (3) Several of Davis’s contemporaries, Larry Bell, DeWain Valentine, Peter Alexander and John McCracken, were also exploring the new acrylic plastics that were developed and used industrially for auto bodies, surf boards and in the aerospace industry, but in very different ways than Davis, each producing literal shapes of a uniform translucent color as part of the Light and Space movement and other aesthetic purposes.

The 1960s and 70s were a productive, creative time for Davis and his new shaped, cast polyester resin paintings were in high demand. His paintings were acquired by the Museum of Modern Art, New York, the Tate Gallery, London, the Los Angeles County Museum of Art, San Francisco Museum of Modern Art, and the Chicago Art Institute in 1968. Davis was a National Endowment for the Arts grantee in 1968 and his paintings included in international exhibitions: ” (4) Documenta International”, Ausstellung, Kasel, Germany,1968 and “U. S. A., XXXVI International Biennial Exhibition of Art”, Venice, Italy, 1972.

Davis moved to Malibu, California in 1972 where he designed a new studio and home with architect Frank Gehry. He spent a year learning silkscreening, lithography, etching, and papermaking from Ken Tyler at Gemini, G.E.L. and Tyler Graphics, Bedford, New York. Returning to painting on canvas in 1973, Davis continued pushing the edges of illusionism in the pictorial space by expanding his use of new supports and media while further leveraging geometry, perspective, color relationships and optical effects. The well-known series included: “the large scale Snapline Series in 1975-78; Floater Series, 1978-79; Flatland Series, 1980-81; Object Paintings, 1982; Music Series, a segue from geometry and back to expressionist paintings, in 1983-85, which becomes an important point and aspect in Davis’s career; Freeway and Freeline Series, 1987; and Spiral Series, 1988.”4 Davis also began using the Macintosh computer and many new programs and software for rendering, modeling, and researching three-dimensional space.

In 1993 Davis moved his home and studio to a compound of buildings based on the Navajo Hogan designed in collaboration with architect Dennis Holloway and anthropologist Charley Cambridge. Returning to painting in 1995 and continuing with his interest in shaped supports, he produced a series of paintings with encaustic (wax) that straddled the pictorial space and objecthood. No surprise that he also became more fascinated with three-dimensional computer modeling, painting, and printing.

A significant breakthrough occurred in 2002 with Davis producing a large new series of paintings of acrylic medium on expanded PVC for the supports. This led to multiple exhibitions of the new paintings, additional museum acquisitions, and a retrospective exhibition, “Ronald Davis: Forty Years of Abstraction, 1962 – 2002,” at the Butler Institute of American Art, Youngstown, Ohio in 2002 that included forty paintings, sculptures, and prints spanning four-decade. Davis continued his work with computers, 3-D modeling, and printing, collaborating with fabricators and producing highly illusionistic imagery on metal supports.

Davis was included in the exhibition “Pacific Standard Time: Crossroads in LA Painting and Sculpture,” at the J. Paul Getty Museum in association with the Getty Research Foundation in Los Angeles in 2011. He had numerous survey presentations and exhibitions of his many significant bodies of historic and newly created artworks throughout the 2000s. He continues to explore computers for his love of three-dimensional space and adapting new technologies and has returned to painting again in 2021, producing a new series for an upcoming solo exhibition.

The newest series of paintings from 2021 and 2022 are mentioned specifically, as well as the other times in 1973 and 1995 when Davis retuned to painting on more conventional supports and/or media, because painting has been at the center of his career and accounts for most of his artistic production. His forays into new materials and processes come out of his intense interest in new possibilities and ways to present optical effects and illusory imagery in paintings. Sometimes the new materials and near-literalness of those explorations go beyond the usual perceptual blurring of two-dimensional and three-dimensional space. In 1967, Barbara Rose noted this difference between illusion and literalism in Davis’s early works. In 2002, Davis said, “This struggle between object and the pictorial remains central to my work after forty years.”1 The struggle has continued through 2022.

The Music Series from 1983-85 is worth noting again. It is a stunning series of paintings that may seem like an aesthetic departure for Davis. However, Davis has used painterly, gestural mark making and splatters to create the interiors of his geometric shapes as well as the grounds in many series, including: cast polyester resin paintings, 1966-1972; “Snapline Series”, “Object Series” and “Splatter Paintings”. Addressing this binary perceived by some viewers, Davis stated emphatically in 2002, “Constitutionally, I remain a geometrician and an expressionist”5