Robin Rhode: The Backyard is My World

Robin Rhode: The Backyard is My World

Lehmann Maupin London presents The Backyard is My World, an exhibition of work by South Africa-born, Berlin-based artist Robin Rhode. 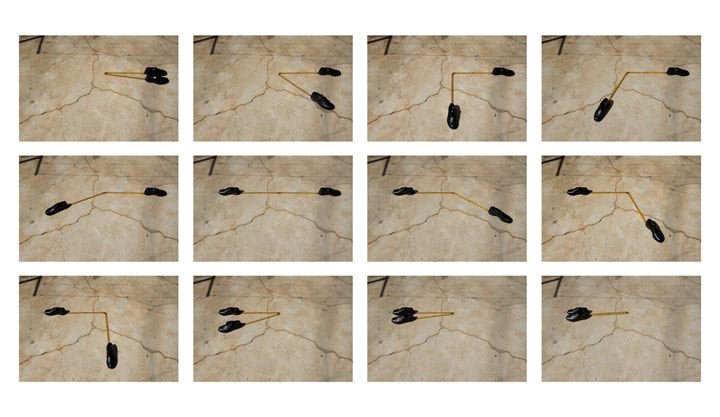 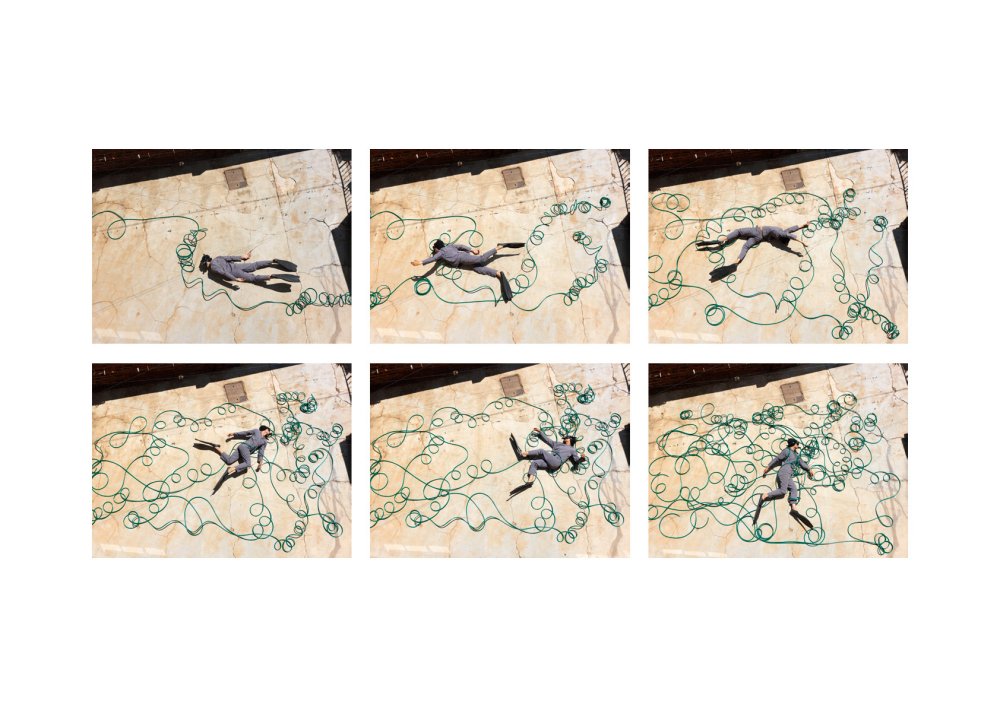 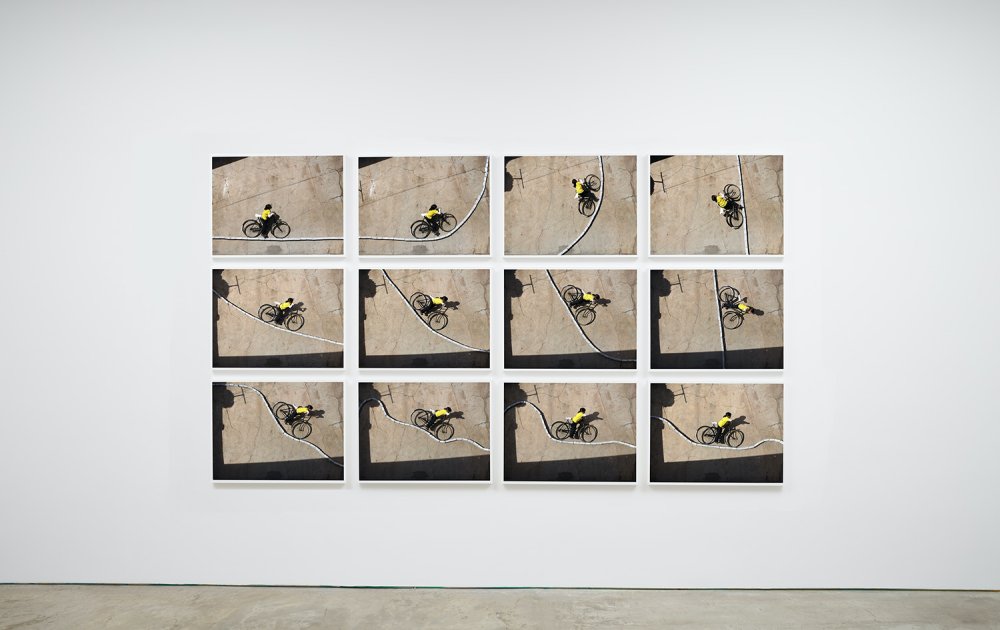 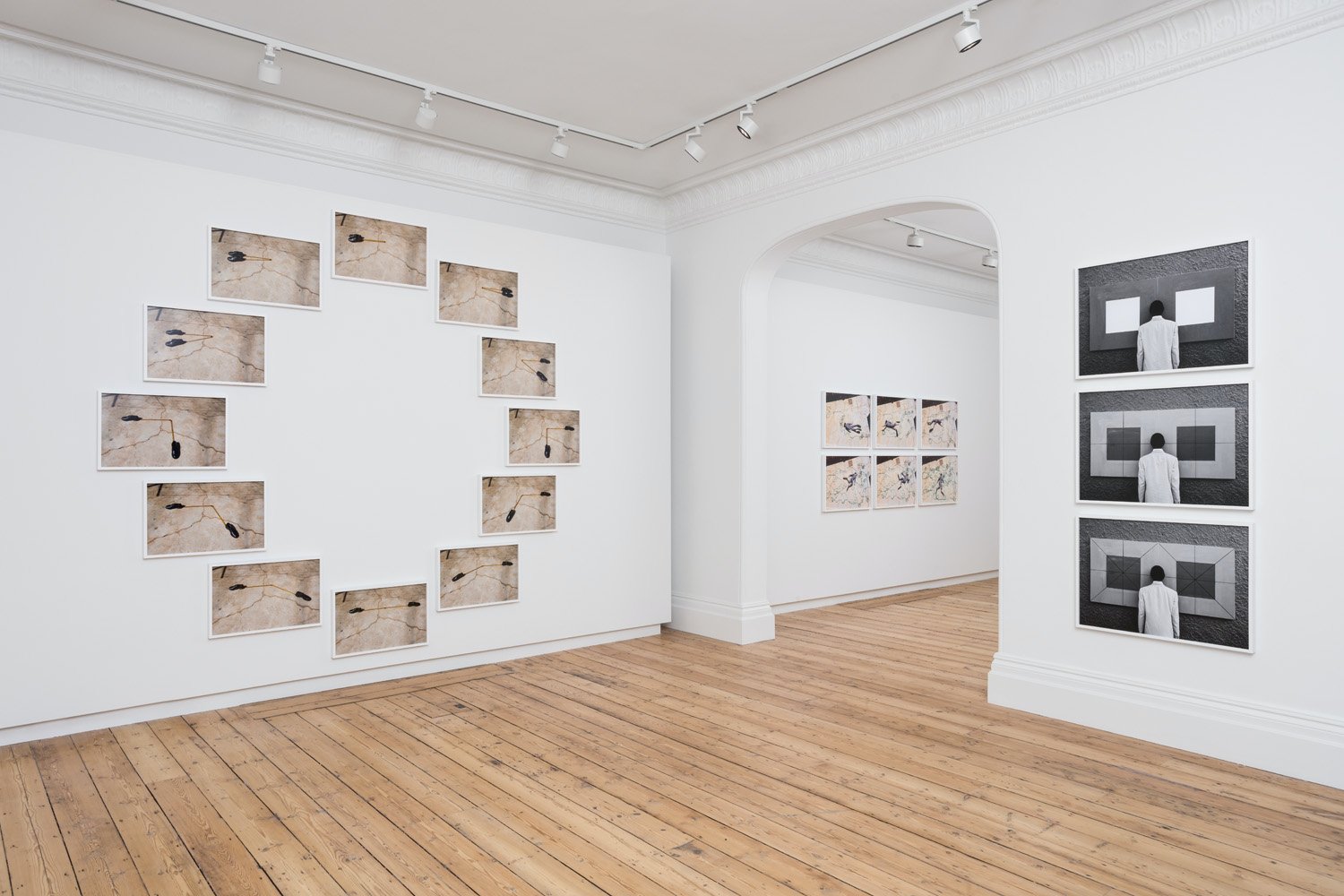 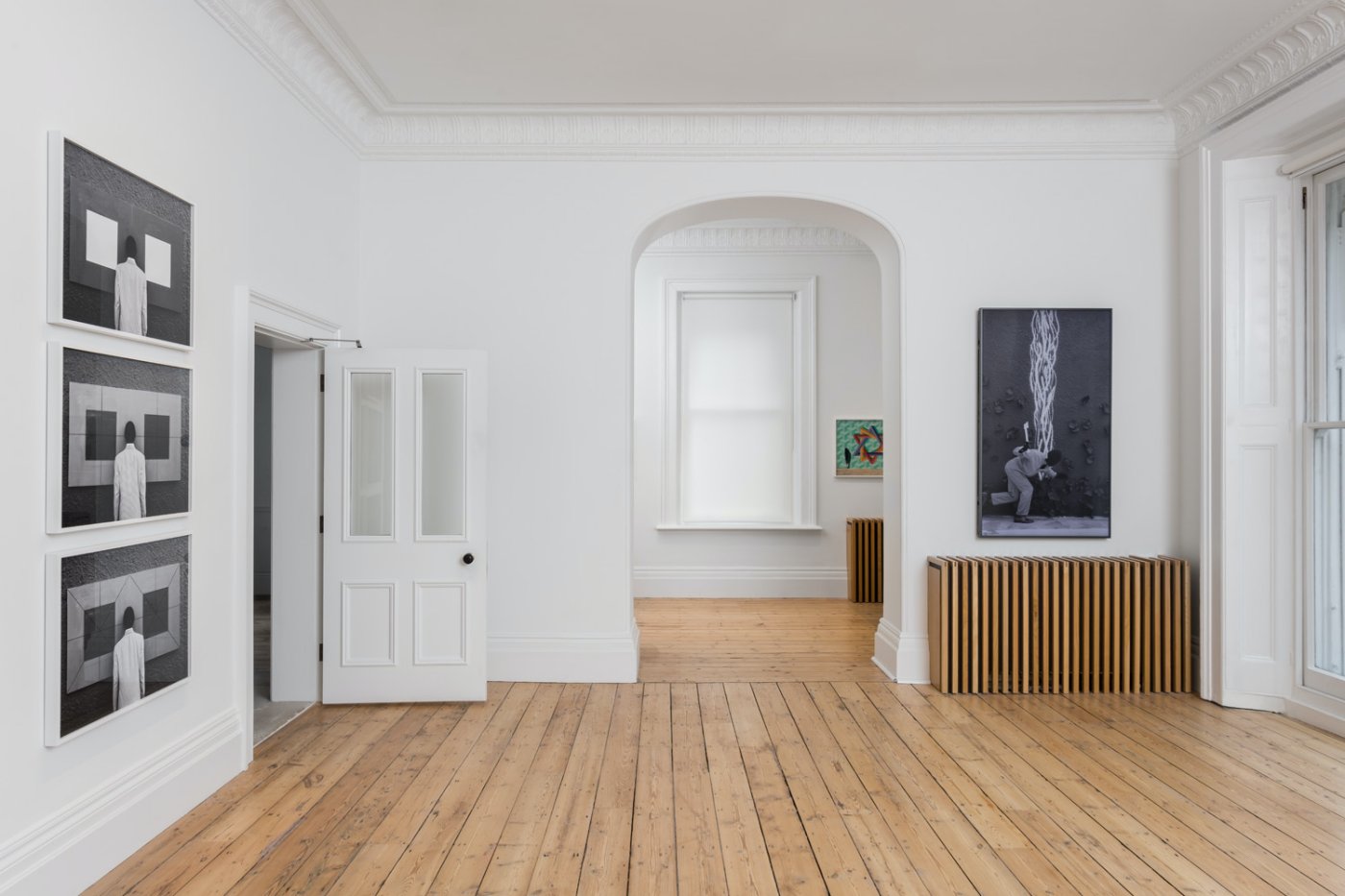 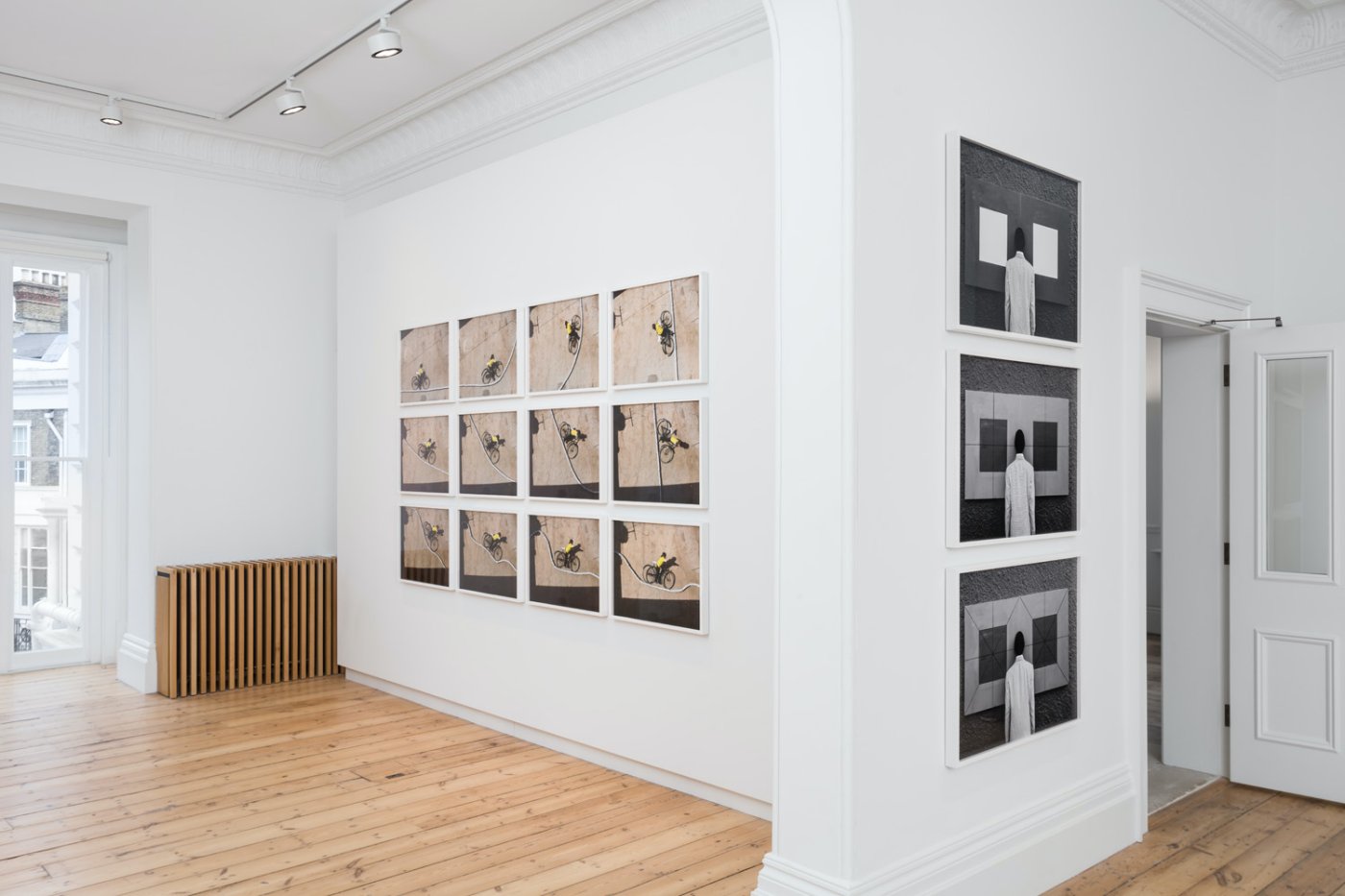 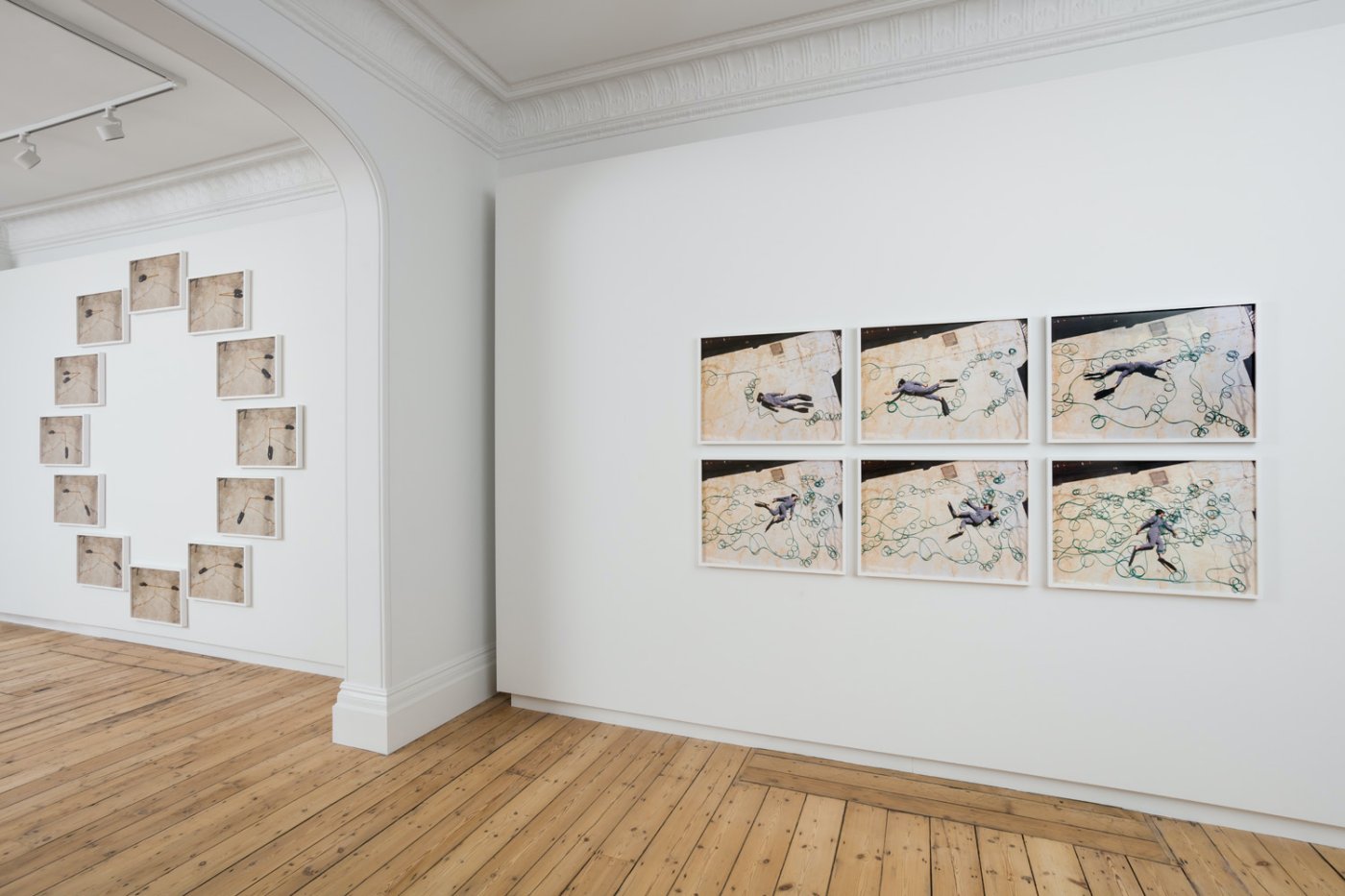 Working across (and often merging) media, including drawing, performance, street art, photography, and animation, Rhode is best-known for his serial photographs of his large-scale public wall drawings, in which figures interact with objects, vehicles, architecture, or abstract geometric shapes and patterns. Over the last two decades, Rhode has developed a distinct multidisciplinary body of work that engages numerous art historical influences, including graffiti, the minimal wall drawings of Sol Lewitt, 1970s performance art, and the stop-motion photography of Eadweard Muybridge. Rhode often draws from science, mathematics, history, artmaking, mythology, and politics to gain a deeper understanding of human beings and how they engage with the world that surrounds them. The Backyard is My World, the artist’s first solo exhibition in London since 2011, features photographs and animations produced over the last 10 years in a single location―the backyard of the artist’s family home in Johannesburg, South Africa.

In this exhibition, Rhode transforms the concrete surface of his backyard, turning it into a body of water, a mathematically inspired imaginary landscape, or a schoolyard playground. The yard functions as an outdoor studio of sorts, the concrete walls and ground offering a monochrome backdrop that transforms the flat visual plane into a three-dimensional space the artist activates using performers, found objects, and site-specific drawings. For Rhode, the backyard signifies comfort, joy, play, and security, allowing him to engage the innocence and freedom of his childhood unencumbered. Although this space has served as a canvas for the artist for over a decade, with the onset of the global pandemic Rhode’s return to the safe-haven of his family home sparked memories of his youth and offered a source of creative inspiration. This moment of reflection led to the reexamination of earlier work and the production of a new series that reveals a “return to basics,” where Rhode distills his compositions to concrete, line, and simple action.

In Yard (2013), 12 sequential photographs depicting two yardsticks and a pair of black polished school shoes are positioned at different angles around the pavement, like arms of a clock. The yardstick, a tool for measurement, functions both as a young boy’s imaginary legs and as a reference to the passing of time that, like one’s youth, signifies evolution, change, and growth. A yard is defined in the Collins English Dictionary as a piece of enclosed ground, adjoining or surrounded by a building, and is also a unit of length equal to three feet. For Rhode, this title references both the measuring unit and a more complex understanding of space, which he describes as “a schoolyard, a boy being called, whistled at, who moves his feet, away, and then towards, the direction of the call, his movement swings, with time.” Yard thus evokes the echo or remnant of a figure; the invisible and enigmatic performer made obsolete. As one reads the work, image by image, the shoes become animated and the invisible performer begins, as if reenacting a schoolyard activity from long ago.

The most recent work in the exhibition, Small Axe (2021), brings the viewer fully into adulthood, addressing injustice and political persecution. The digital animation, rendered completely in black and white, depicts a man holding a white axe and slowly chopping and swinging at a tree composed of thin white painted lines. Inspired by the 1973 Bob Marley song “Small Axe,” released the same year anti-apartheid activist Steven Biko was placed under a banning order in South Africa, Rhode’s Small Axe presents a poetic allegory for the fight against oppression. As the animation progresses, the tree (the oppressor) is slowly dismantled by the woodsman (the people), as black leaves fall rhythmically to the ground in sync with an original guitar score. In the final scene, both tree and figure are gone, and all that remains is the wall, the vestiges of the struggle, and the familiar cracked pavement of Rhode’s childhood backyard. In Small Axe, Rhode investigates parallel histories, whether political or, in this case, musical, with relation to narratives that connect his own identity to the world from which he takes inspiration, ultimately allowing once-dominant discourses to be played with and reinvented.

As the title implies, The Backyard is My World offers a unique perspective of “home” at a moment when, for many, it has become a renewed point of focus and contemplation. By featuring work produced over the last 10 years at Rhode’s childhood home, this exhibition invites the viewer to consider how our homes have transformed into the stage on which nearly every aspect of our life now plays out. In conjunction with his presentation at Lehmann Maupin London, Rhode will open a major retrospective on April 24 at the Museum Voorlinden in Wassenaar, the Netherlands, which will examine the full breadth of the artist’s practice from 2000 to the present. The exhibition, Robin Rhode, will highlight the significant role that drawing has played throughout the artist’s practice―in photography, video, sculpture, and performance―and will examine the artist’s relationship to site- specificity and use of the wall as a canvas on which he merges the real with the imaginary.