Pace Gallery presents Thunderbolt Disco, Robert Nava’s first exhibition in the UK. Taking over the entirety of Pace’s Hanover Square gallery, this exhibition showcases new paintings by the American artist in his distinctive visual lexicon of fantastical characters and forms. 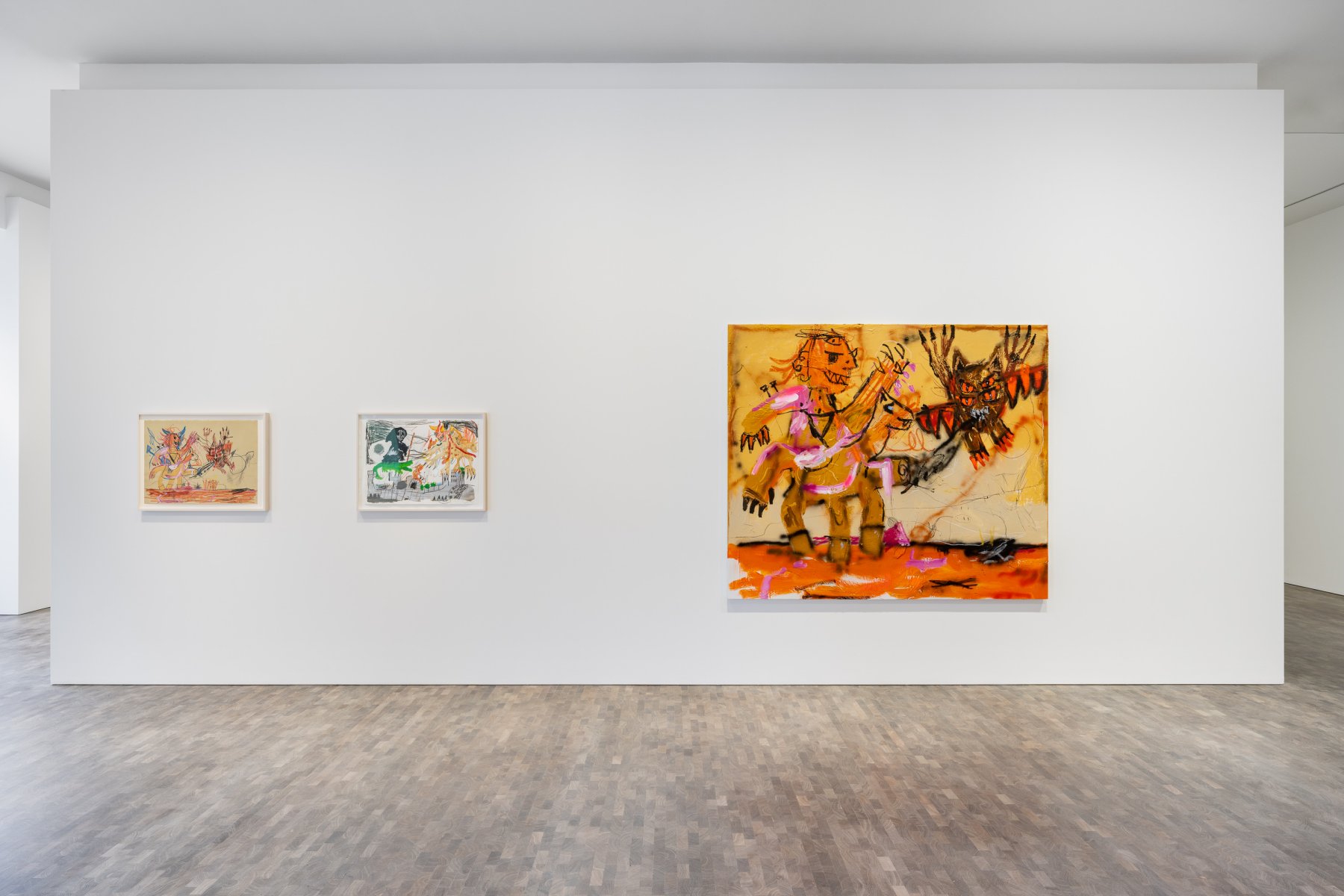 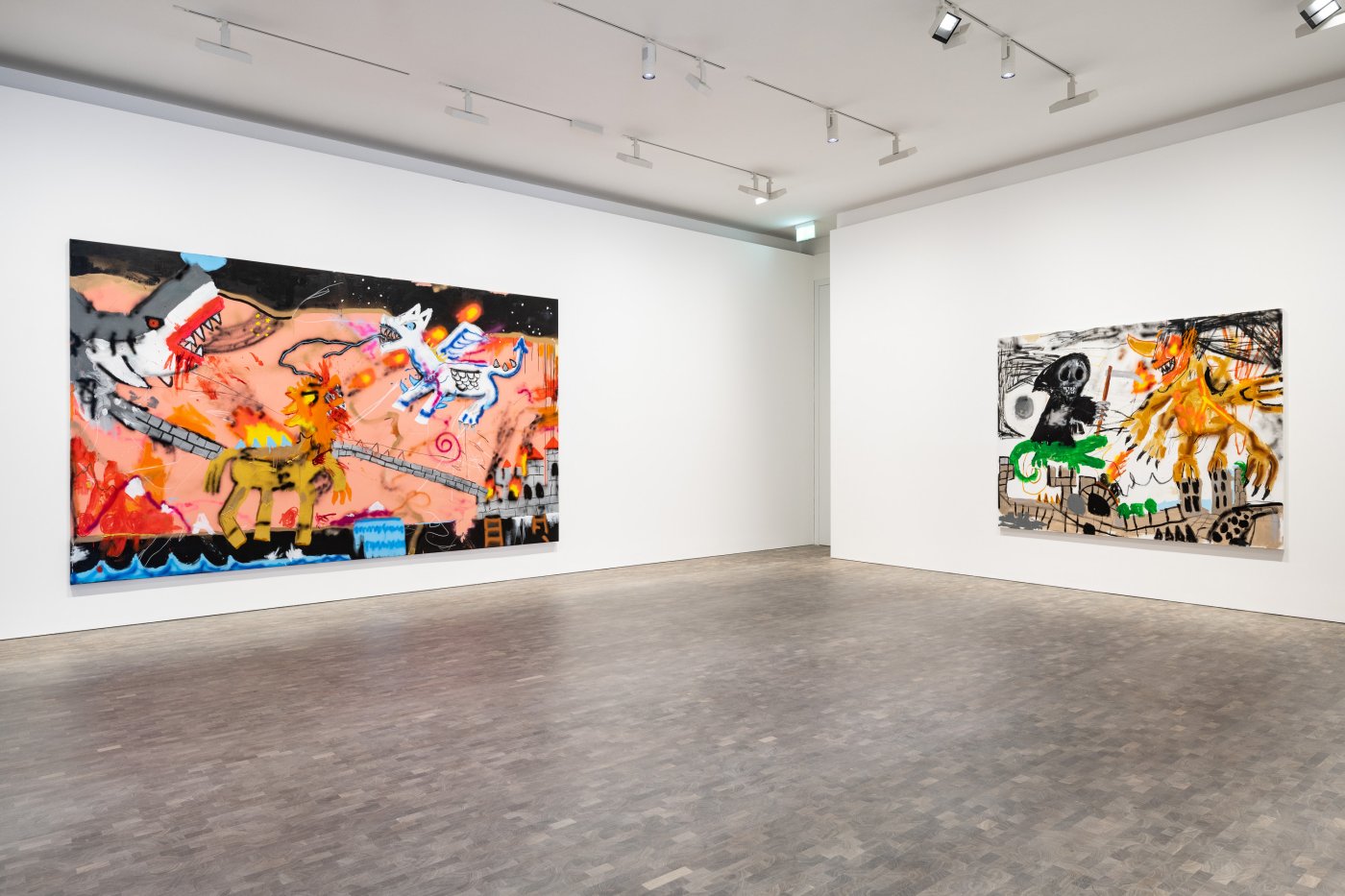 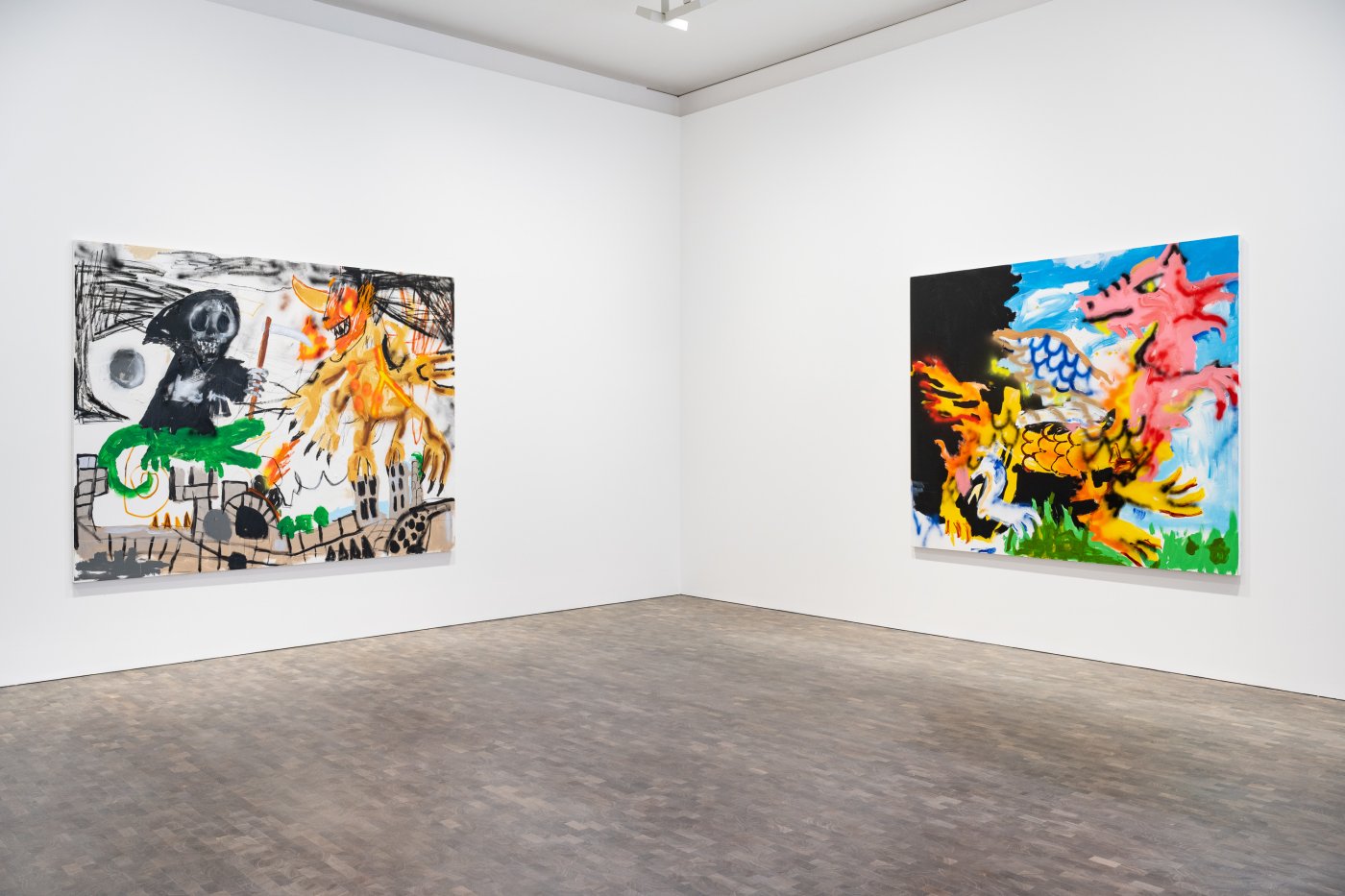 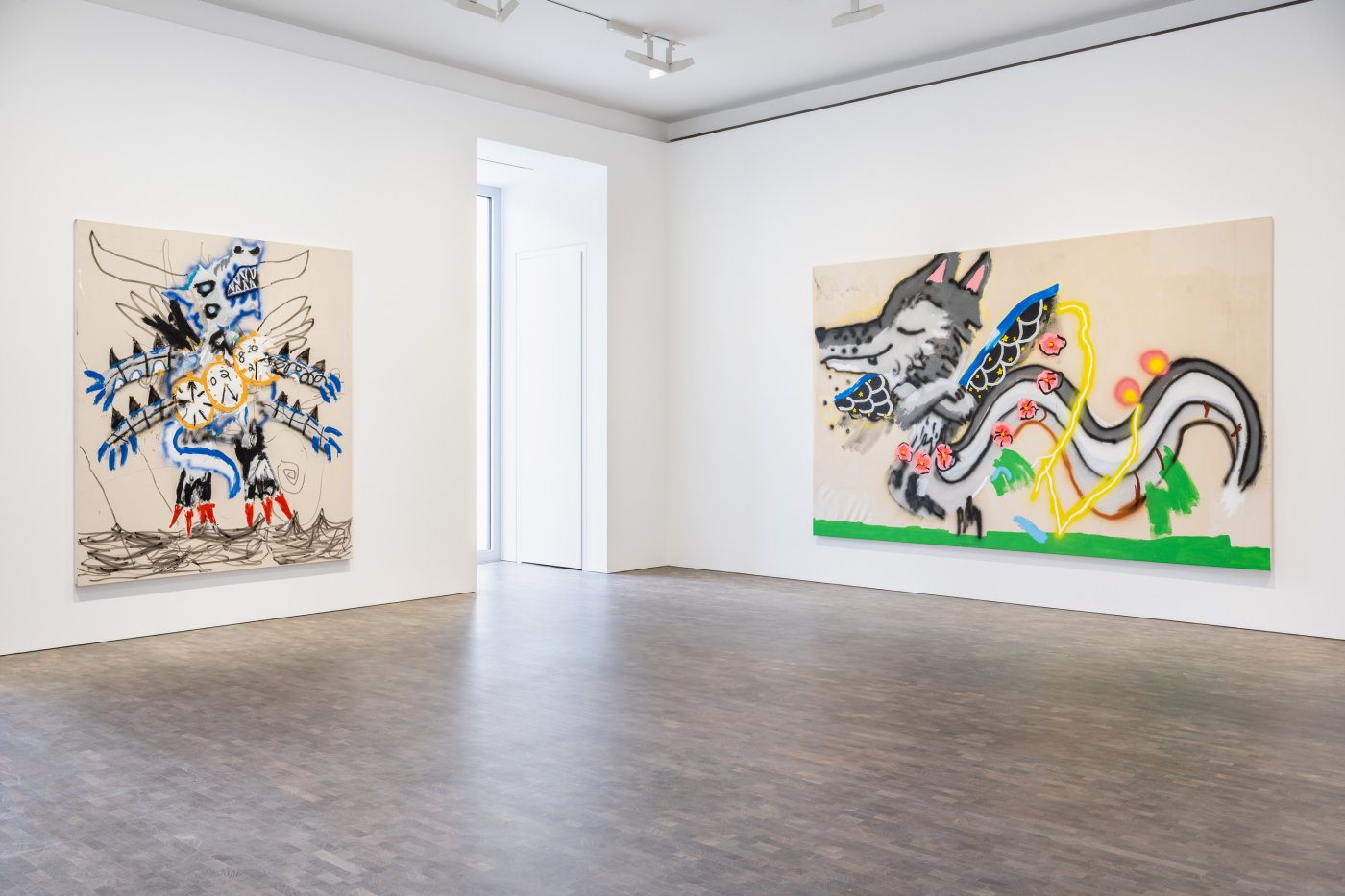 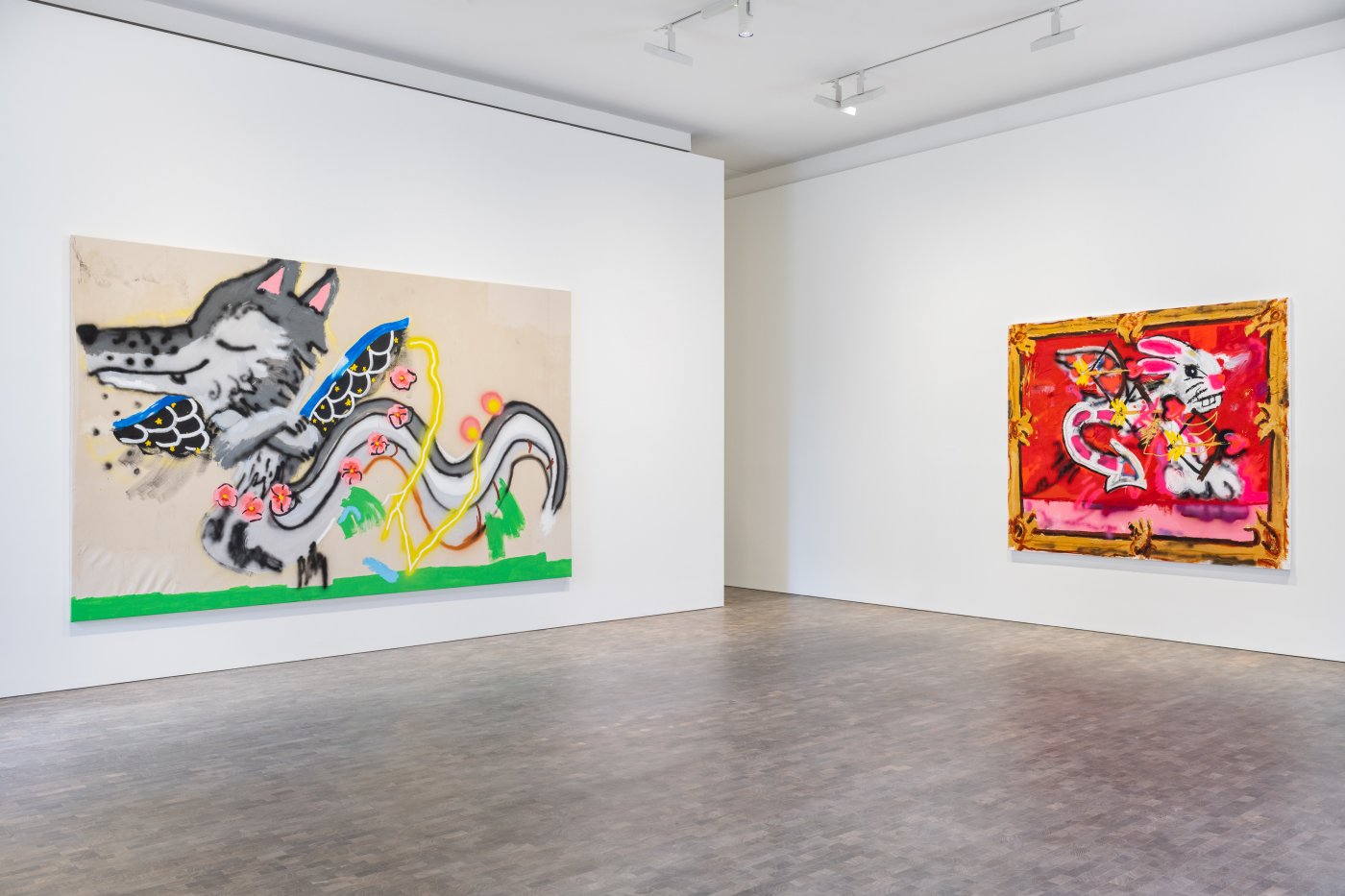 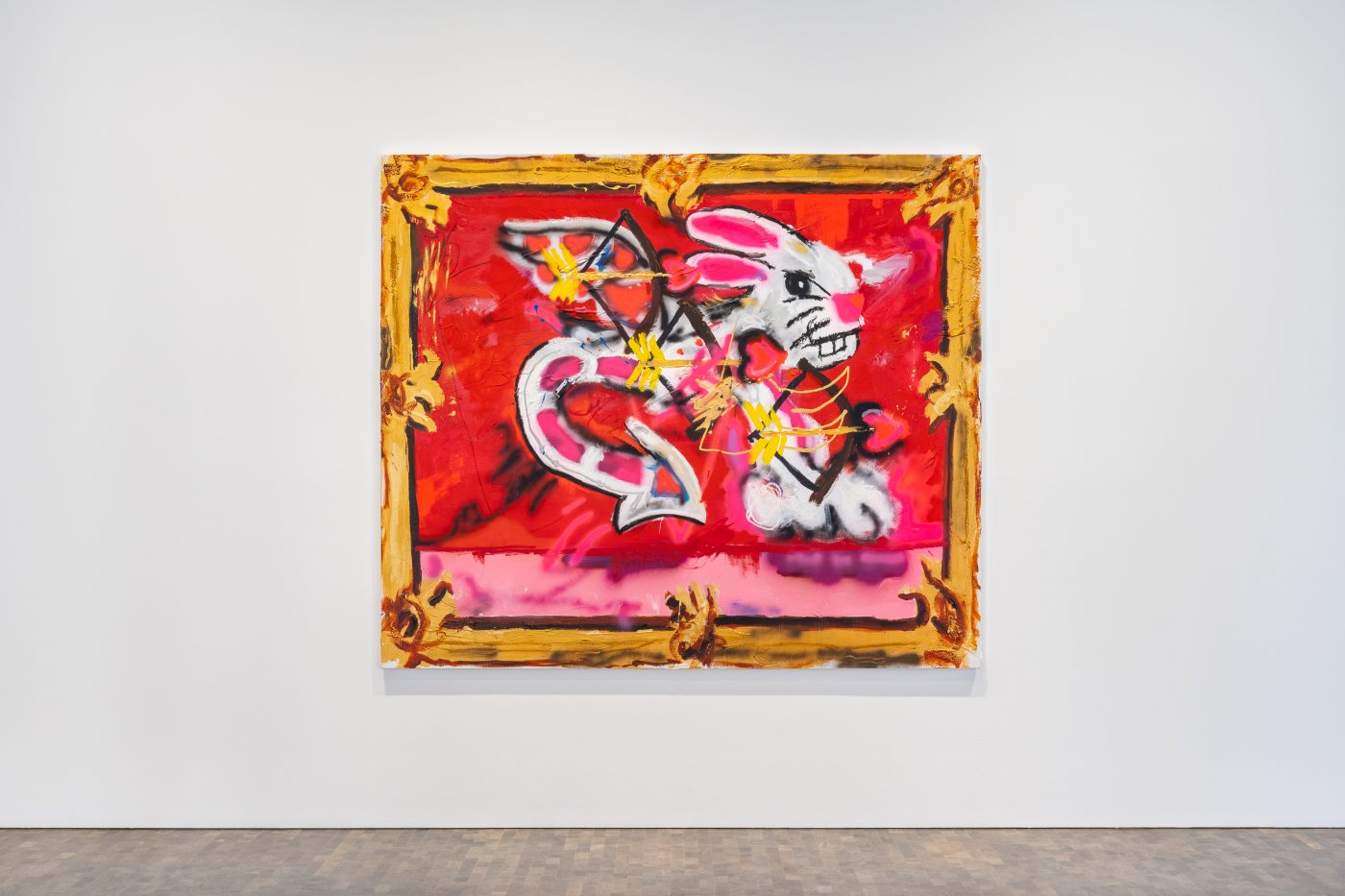 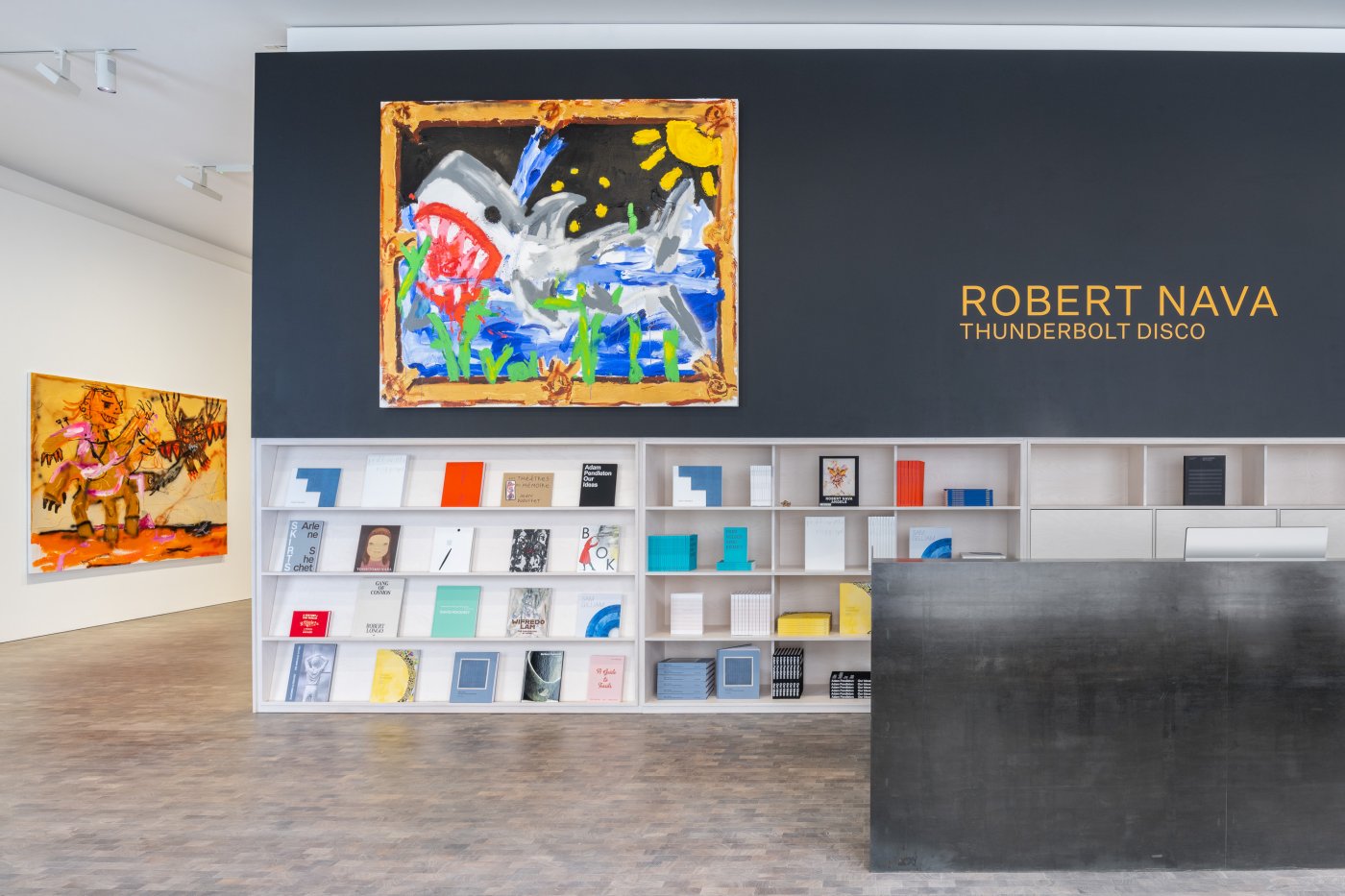 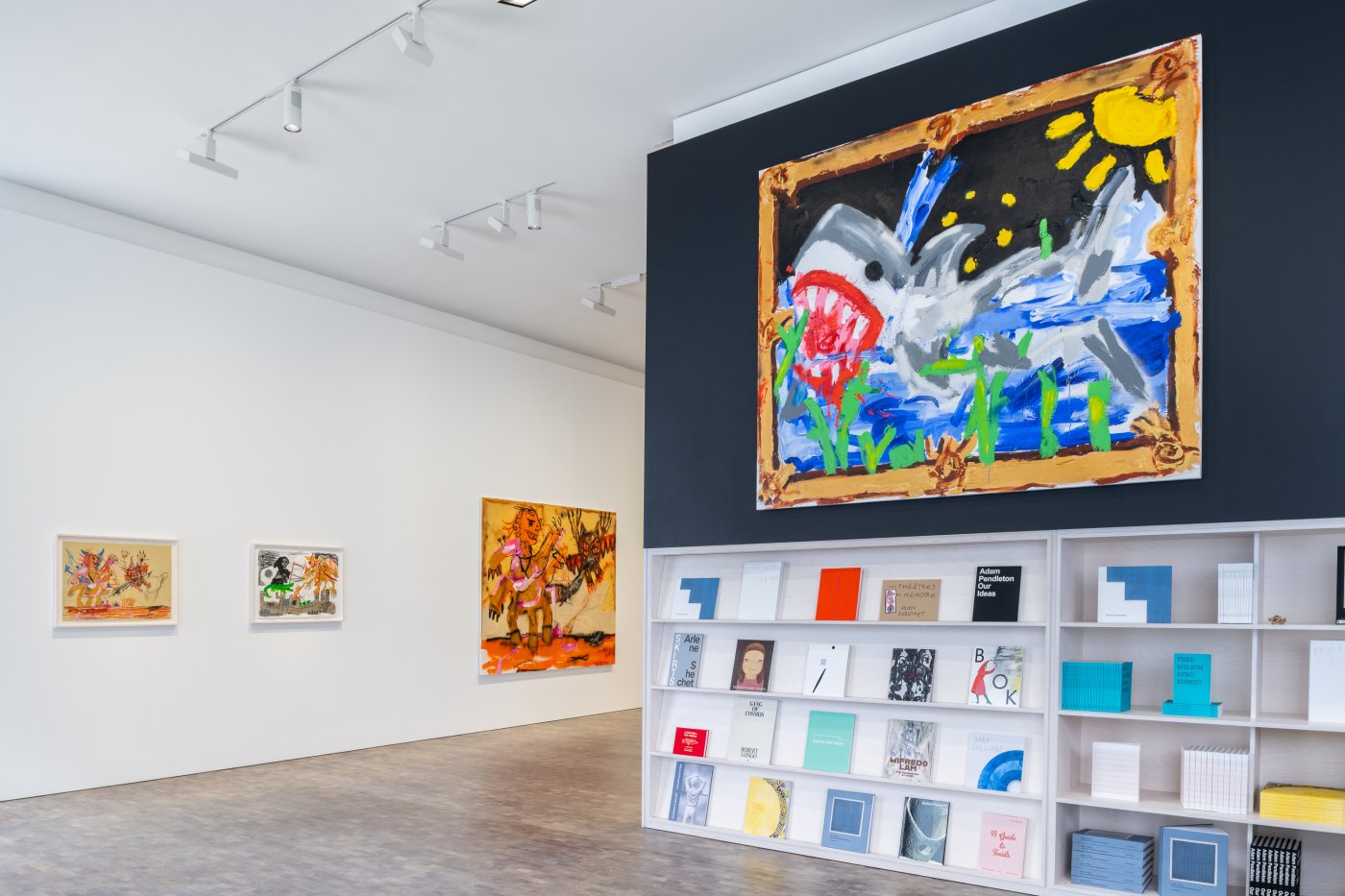 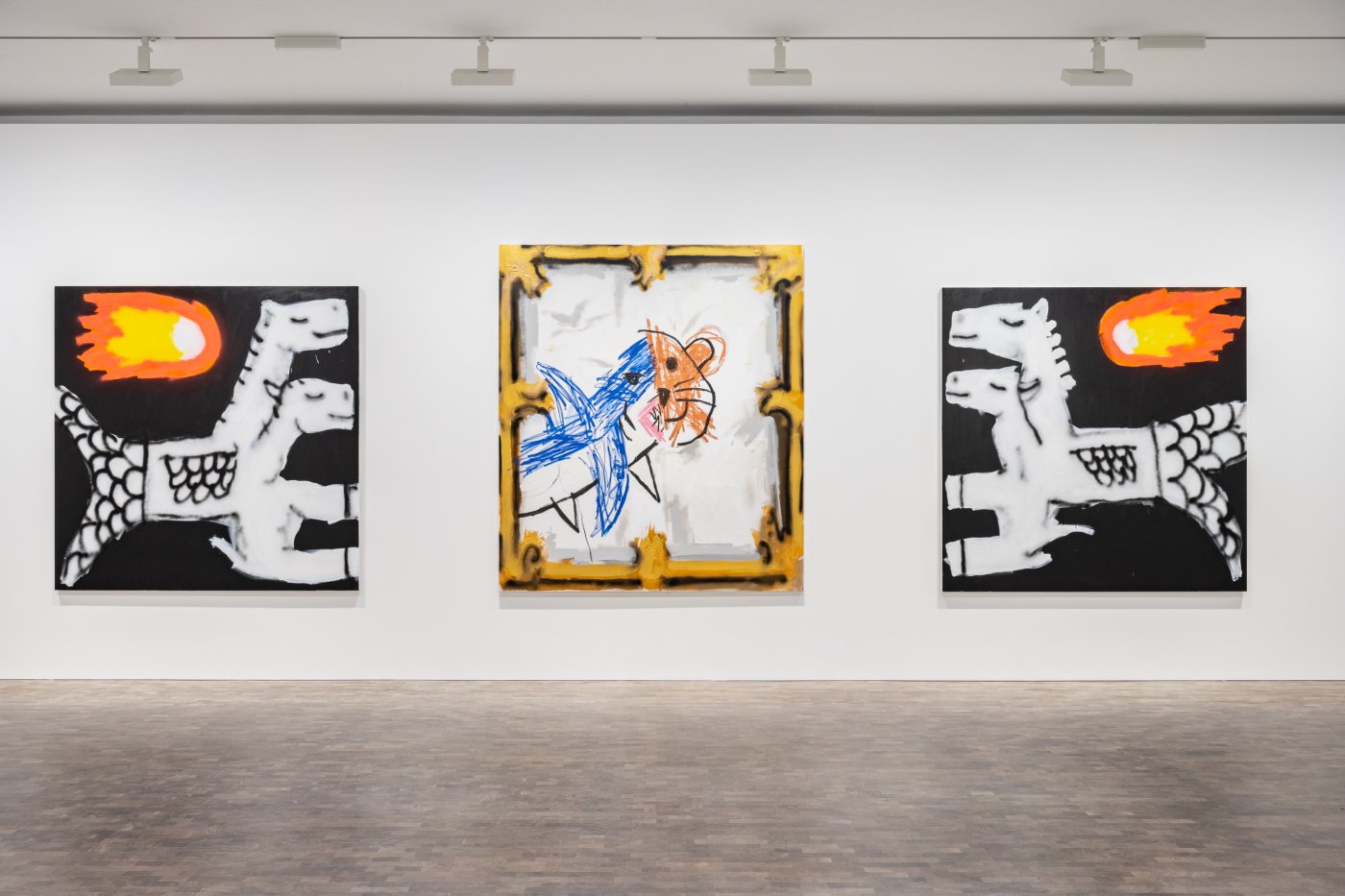 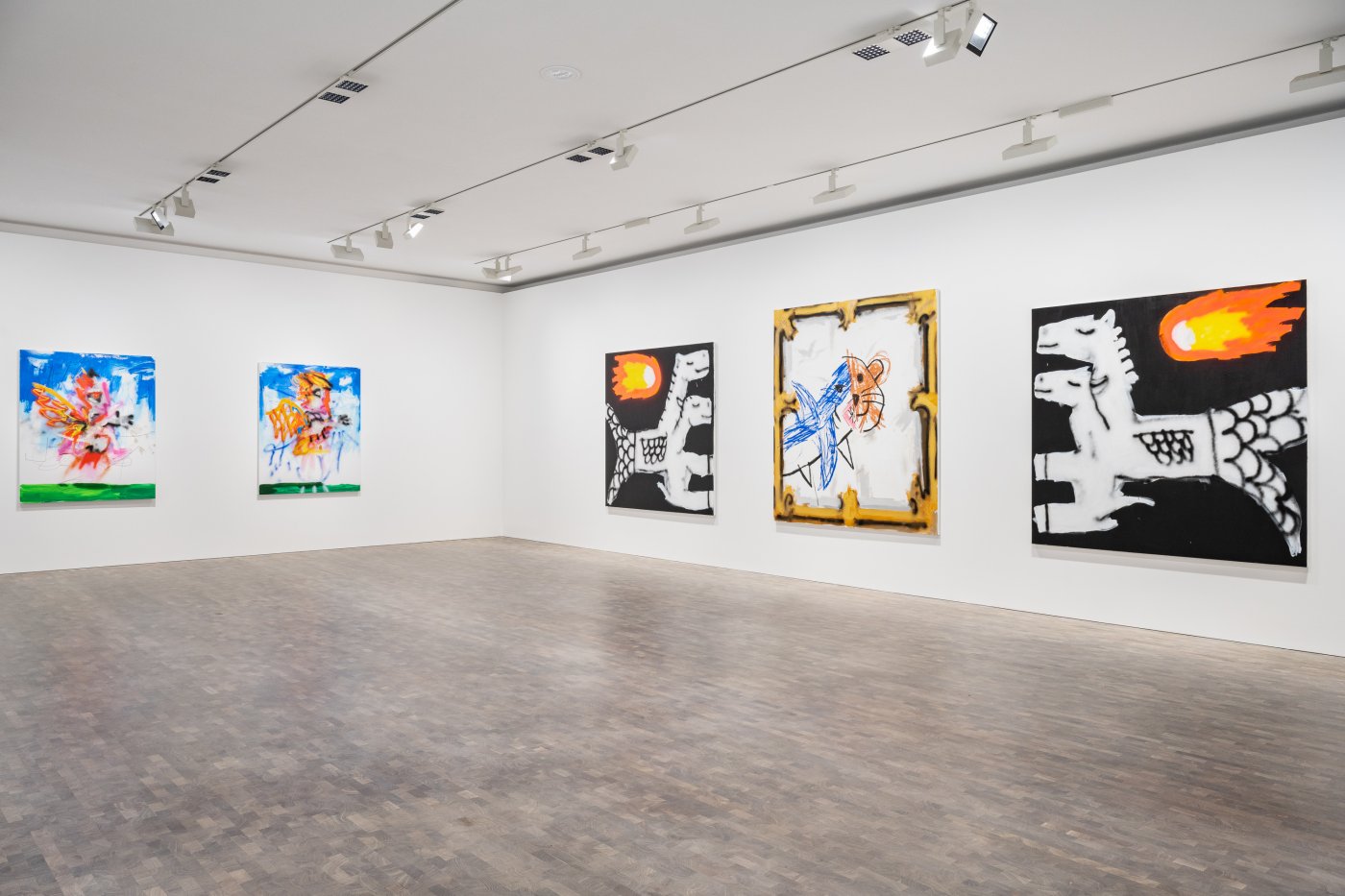 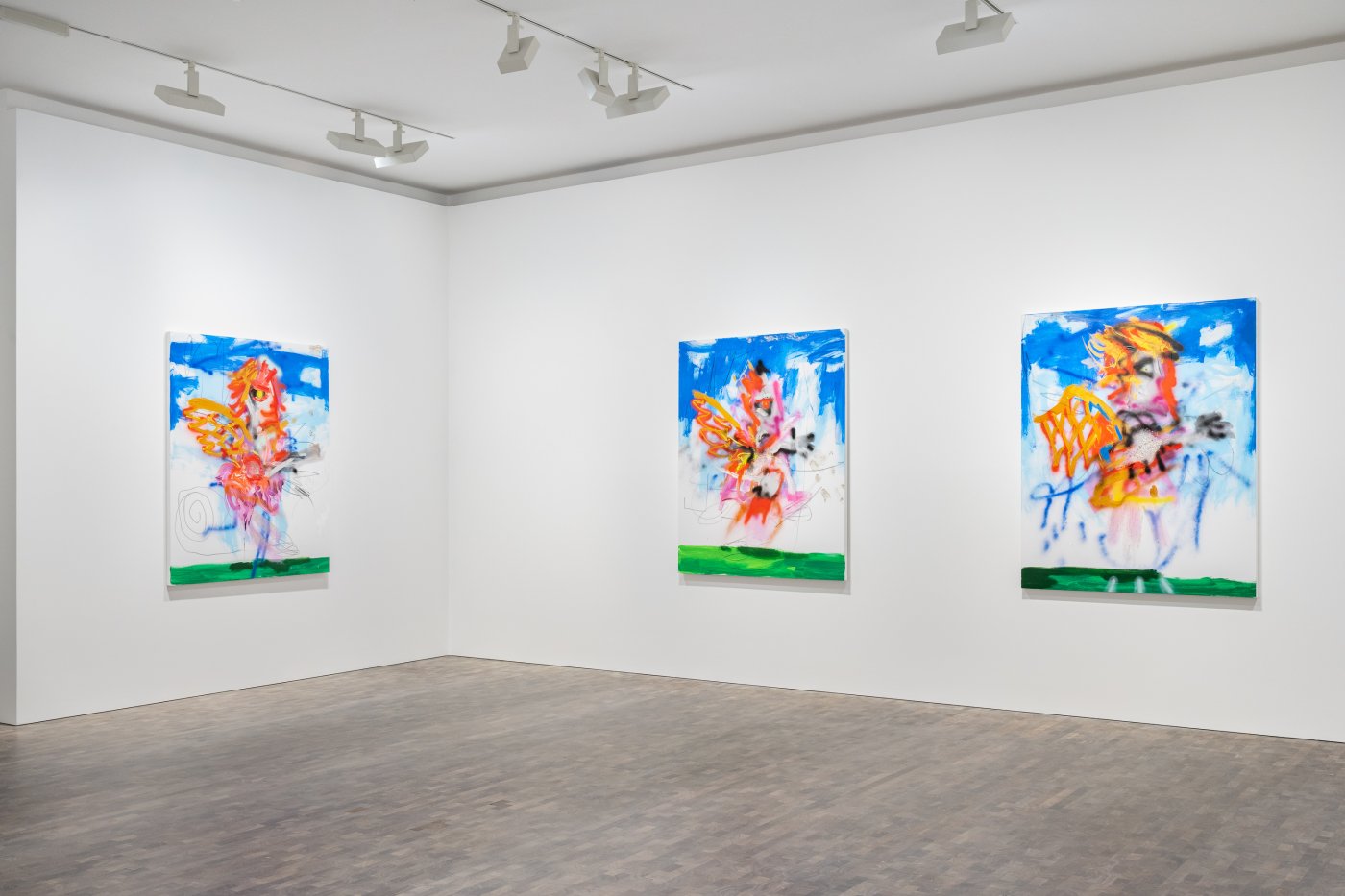 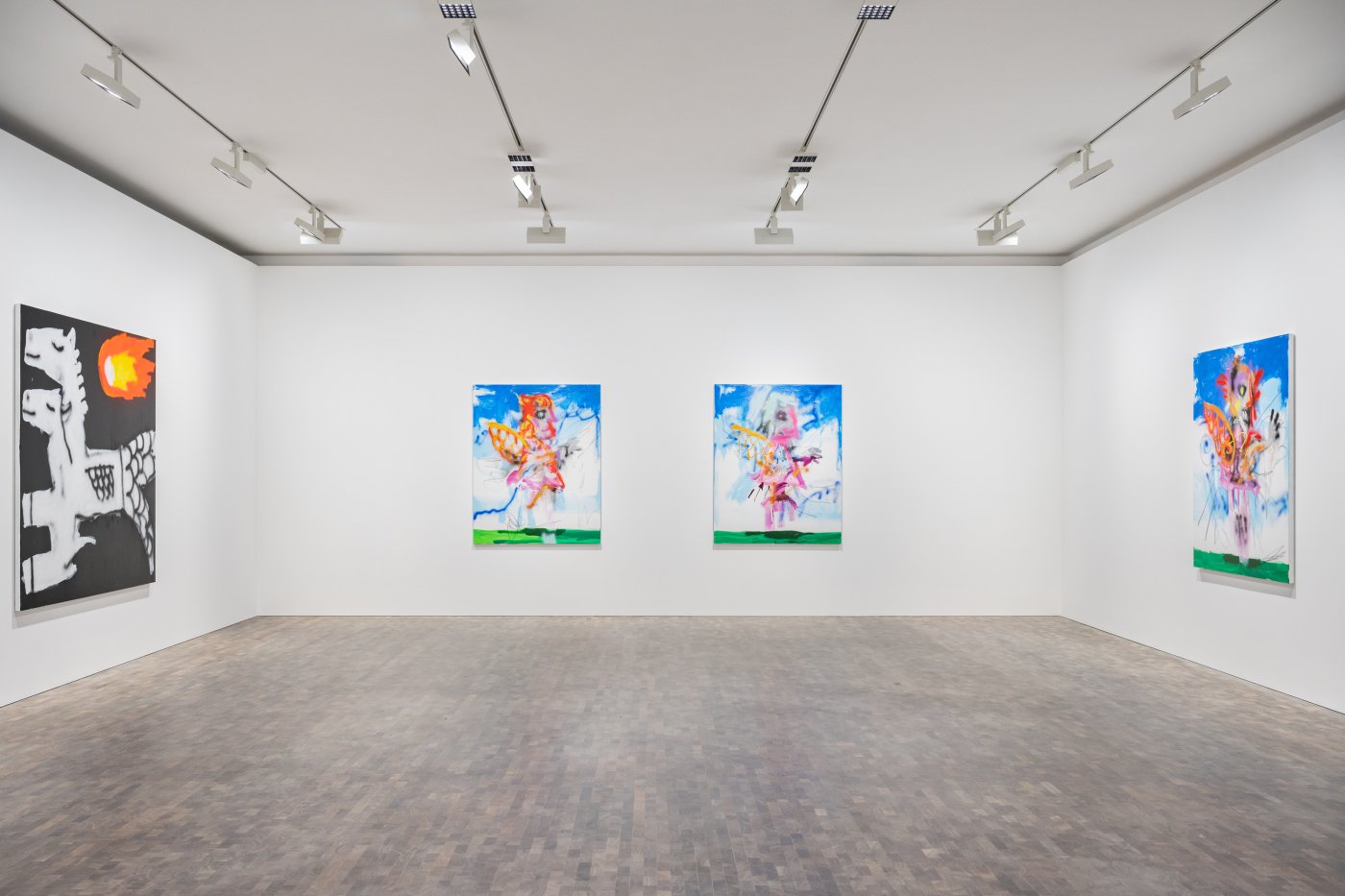 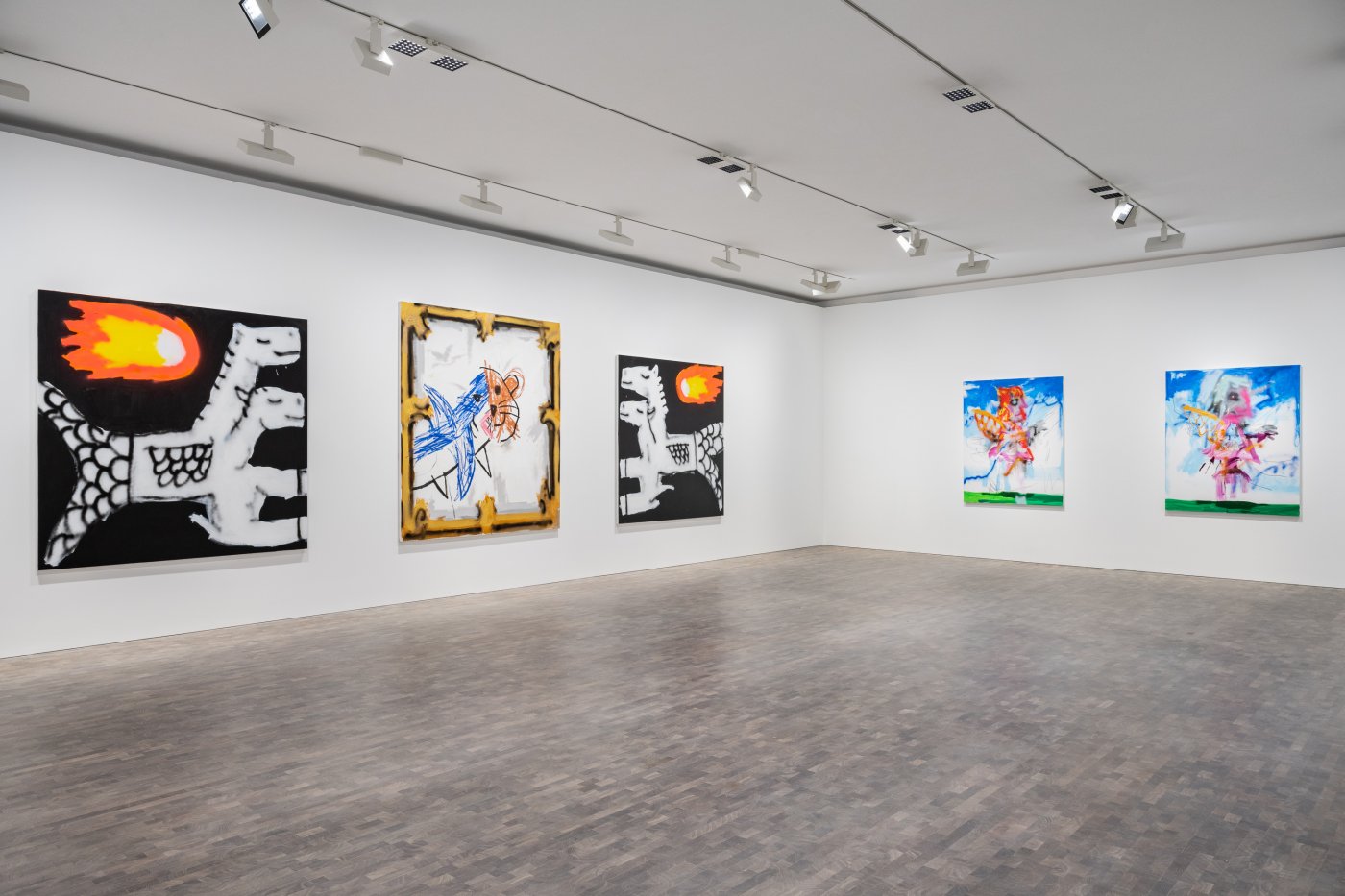 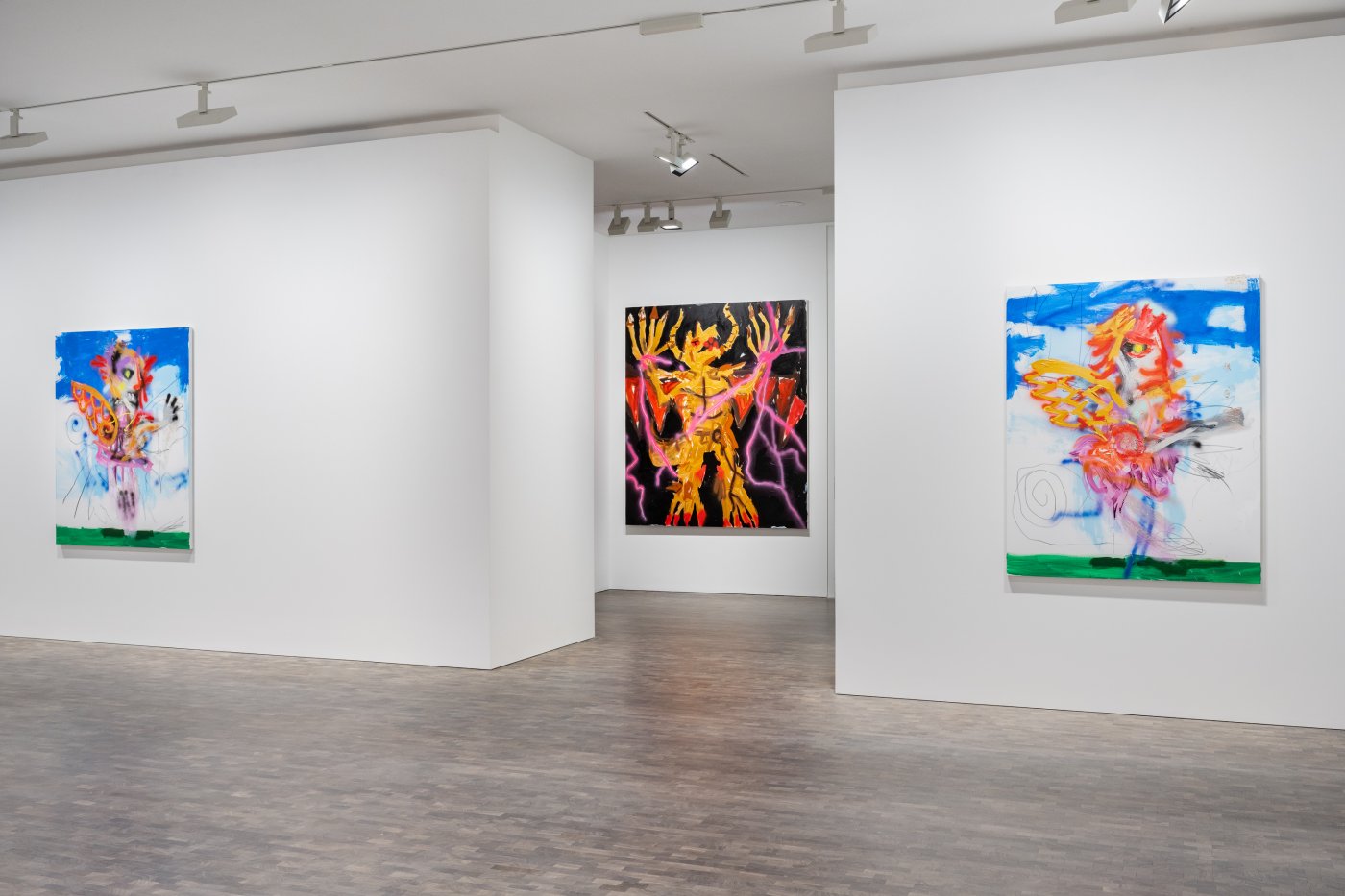 After receiving his MFA in Painting at Yale University in 2011, Nava dedicated his practice to developing a unique cast of characters that occupy his paintings. Nava draws from a diverse array of visual and conceptual sources that include mythology, philosophy, religion, and ancient history as well as video games, monsters, and the animal kingdom. Of his work he has stated, ‘I wanted to return to my childhood interests. I wanted to see these fabled creatures in my studio. I’m interested in a new kind of mythmaking, even though there are no real stories behind them yet. It opened up a world of imagination while preserving a childlike drive.’ Nava’s rejection of the constructed boundaries that separate ‘high’ and ‘low’ art forms the core of his approach to painting. His work refers to the legacies of artists such as Jean-Michel Basquiat, Jean Dubuffet, and Cy Twombly, who also favored a more gestural, imaginative, and energetically raw style of working.

Nava’s metamorphic creatures are bold and imposing as they fill the canvas and blend into one another, opening a window to the artist’s inner world of imagination. The bedrock of Nava’s practice is drawing, a daily ritual for the artist. From these sketches, he translates his creatures onto canvas in his signature combination of acrylic and grease pencil. As the exhibition’s playfully irreverent title suggests, these paintings resist easy classification, in the artist’s words, ‘if you remove meaning, feeling gets a chance to raise its hand higher.’

Thunderbolt Disco features new paintings made over the past two years, including Nava’s largest paintings to date. At the core of these works are ideas of conflict and transformation. In Lightning Bolt, Second Chance Lion (2022) a hybrid lion-dragon with blood red wings and demonic eyes flies through the sky, casting a bolt of lightning at an unseen target. This fantastical scene is at once reminiscent of folkloric tales and the imagery of role play games. In Psychology of Ares, Nava’s immense painting that measures more than four meters in length, he demonstrates his ability to work on an ambitious scale. The black bands that compress the coral ground are reminiscent of the landscapes of video games, while the scale echoes that of Old Master history paintings. In a similar vein, Love Bunny Dragon (2022), Meg with Algae (2022), and Megalodon Grizzly Bear (2021) incorporate gilded frames into their compositions, appropriating the aesthetics of historical painting. By adopting and subverting the imagery of grandeur, Nava further complicates the categorizations and conventions of painting.

In his Half Angel Half Alien series, the otherworldly figure mutates and swirls across the canvas, at once menacing and enticing, unsettling and captivating. While the angel is not a new motif for Nava, in these works he has introduced a new material into his practice – the mineral mica. Used for an extraordinary range of products from cosmetics to roofing material, the shimmering crystals provide an alchemical layer to Nava’s painting that reminds the artist of stardust.

Robert Nava: Thunderbolt Disco will be accompanied by a fully illustrated catalogue featuring an essay by the writer, art historian, and professor Jason Rosenfeld Ph.D and a conversation between Nava and fellow artist Huma Bhabha. It will be published in Summer 2022.

Robert Nava received a BFA in Fine Art from Indiana University as well as an MFA in Painting from Yale University. His practice centers on large-scale paintings and works on paper that portray whimsical creatures, rendered through gestural markings. Finding inspiration in the art of the distant past, from Medieval Christian imagery to Mayan and Sumerian art, as well as popular contemporary sources such as animation, Nava creates compositions that are carefully considered yet marked by a sense of naivete and spontaneity.

His art has been exhibited in various solo exhibitions both domestically and abroad, including Bloodsport (2022) at Night Gallery, Los Angeles, CA, Angels (2021) at Vito Schnabel Gallery, New York, NY, and Robert Nava (2020) at Sorry We’re Closed in Brussels, Belgium. This is Robert’s third exhibition with Pace.