David Richard Gallery presents Robert Murray, 3D and 2D Works, an exhibition surveying the sculptor’s abstract artworks from 1968 through 2019 that coincides with the publication of Murray’s first-ever monograph that covers his six-decade career including discussions of his artworks and processes, influences that informed his work and friendships. 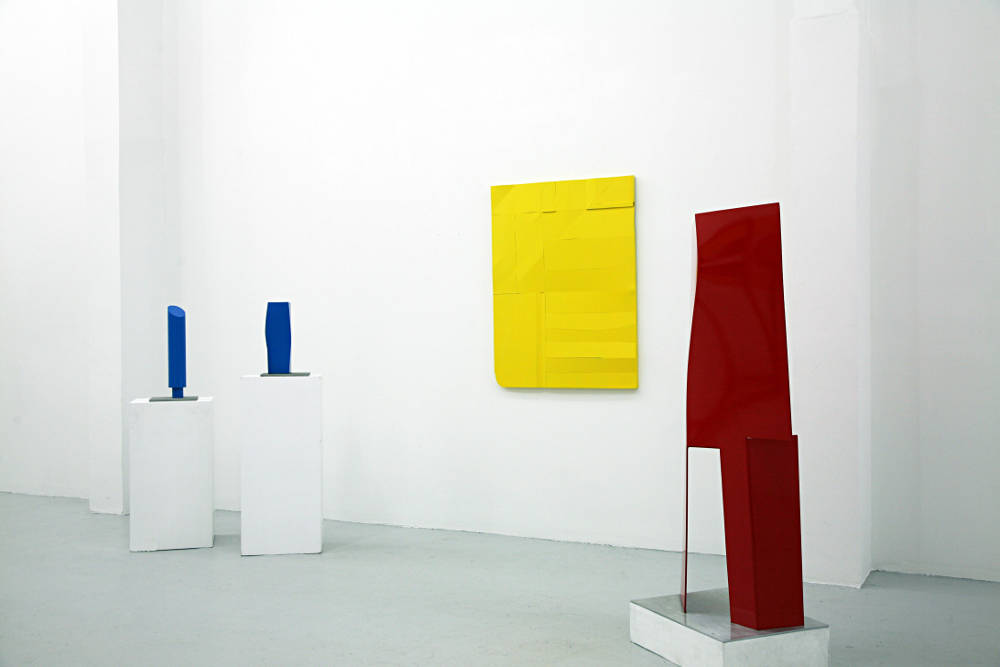 Murray creates reductive, abstract geometric sculptures in steel and aluminum using industrial fabrication materials painted with minimal color palettes. His influences are the landscape, topographical views from his small airplane (flying is one of his passions) and the culture, motifs and imagery of Indigenous peoples in Canada and the US. Murray was born and raised in Western Canada and arrived in New York in 1960 where he developed his visual language and quickly gained recognition for his distinct contemporary sculptures with clean lines, geometric shapes and bright enamel colors that compliment both the wilderness as well as urban public spaces. His use of a single color leverages the light, shadows and surface to create dynamic structures and internal tension that suggest volume and movement with the greatest economy of means.

This exhibition also presents a wide range of Murray’s two-dimensional works in metal, paint and hand-made prints that are each distinct series of artworks in dialog with the three-dimensional sculptures. The two-dimensional works have been an integral part of Murray’s practice and allow him to explore color palettes and color relationships in a systematic way on a flat painted surface by adapting and utilizing compositional elements and processes from his sculptures. The landscape relief series and paintings on paper are examples of his sensitivity to and observation of the land, changes in elevation, water drainage and agricultural fields. Reduced to basic forms, each has a unique shape and purpose fitting into the large landscape and view.

About Robert Murray:
Following studies at the University of Saskatchewan’s Regina College School of Art, Murray participated in the Emma Lake Artist’s workshops in the late 1950s under the leadership of Jack Shadbolt, Barnett Newman, John Ferren, Clement Greenberg and others. There, he forged a long-lasting friendship with Newman who shared similar interests in Indigenous art. In 1960, Murray moved to New York and exhibited regularly through the mid-1970s with Betty Parsons Gallery and Paula Cooper Gallery, both in New York and David Mirvish Gallery in Toronto. He has had 70 solo exhibitions in museums and galleries through his six-decade career and his artworks included in numerous group exhibitions. Murray represented Canada at the Sao Paulo Biennial in 1969 and was included in multiple Annual and Biennial exhibitions at the Whitney Museum of American Art, New York. Retrospectives of his work have been held at the Dayton Art Institute, the Art Gallery of Greater Victoria, the Centro Culturale Canadese in Rome, and Grounds for Sculpture in New Jersey. The National Gallery of Canada hosted a major retrospective in 1999, documenting Murray’s contributions to modern art in Canada and the United States. He was awarded the Order of Canada in 2000 and received the Barnett and Annalee Newman Foundation Grant Award for Lifetime Achievement in 2018. Murray’s artworks are in the permanent collections of the Metropolitan Museum of Art, New York, Neuberger Museum, Purchase, New York, Storm King Art Center, Mountainville, New York, Whitney Museum of American Art, New York, Hirshhorn Museum and Sculpture Garden, Washington, D.C., Walker Art Center, Minneapolis, MN, Art Gallery of Greater Victoria, Victoria, Canada, Art Gallery of Ontario, Toronto, Canada, National Gallery of Canada, Ottawa, and Montreal Museum of Fine Art, Montreal, among others.