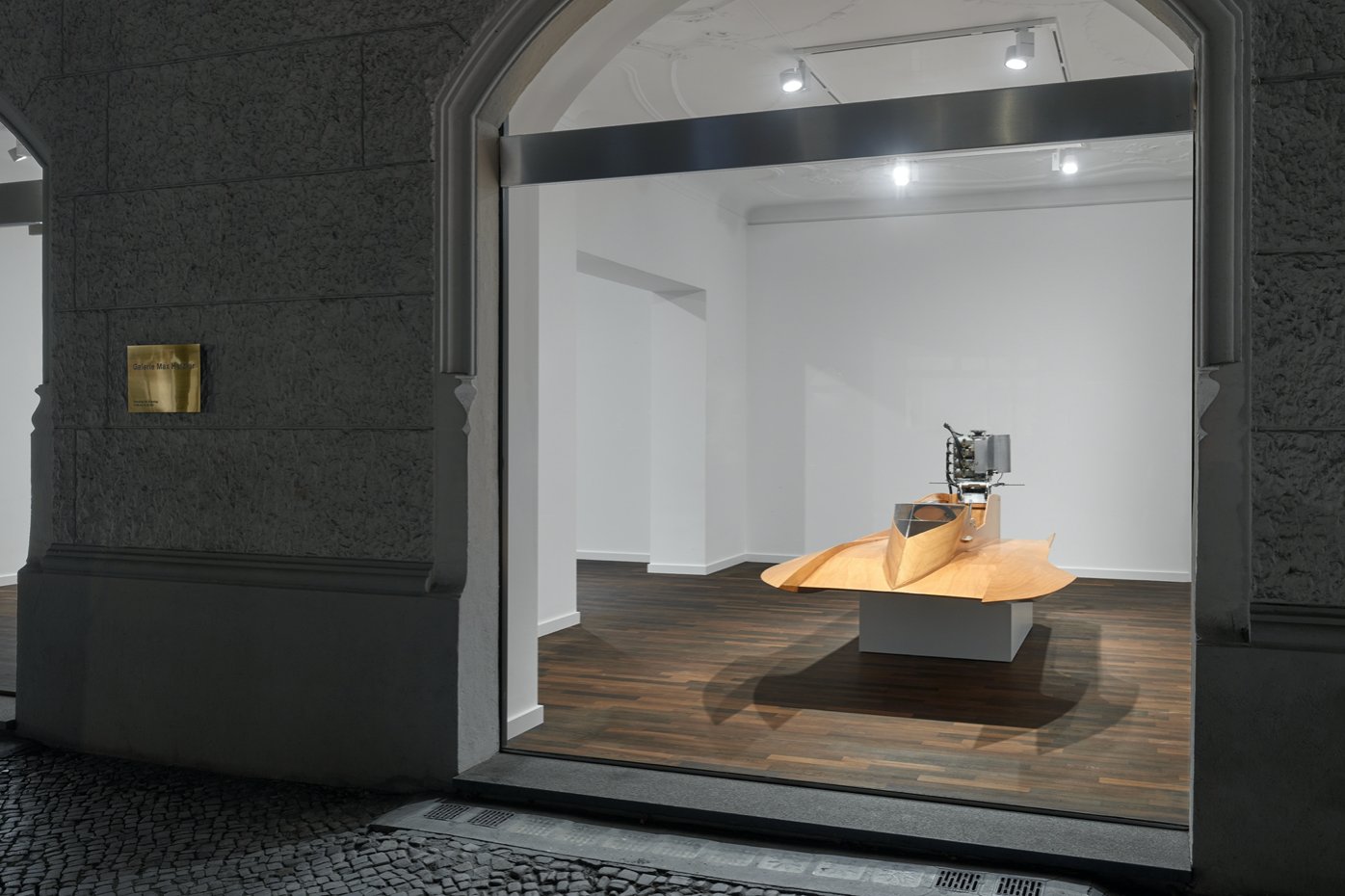 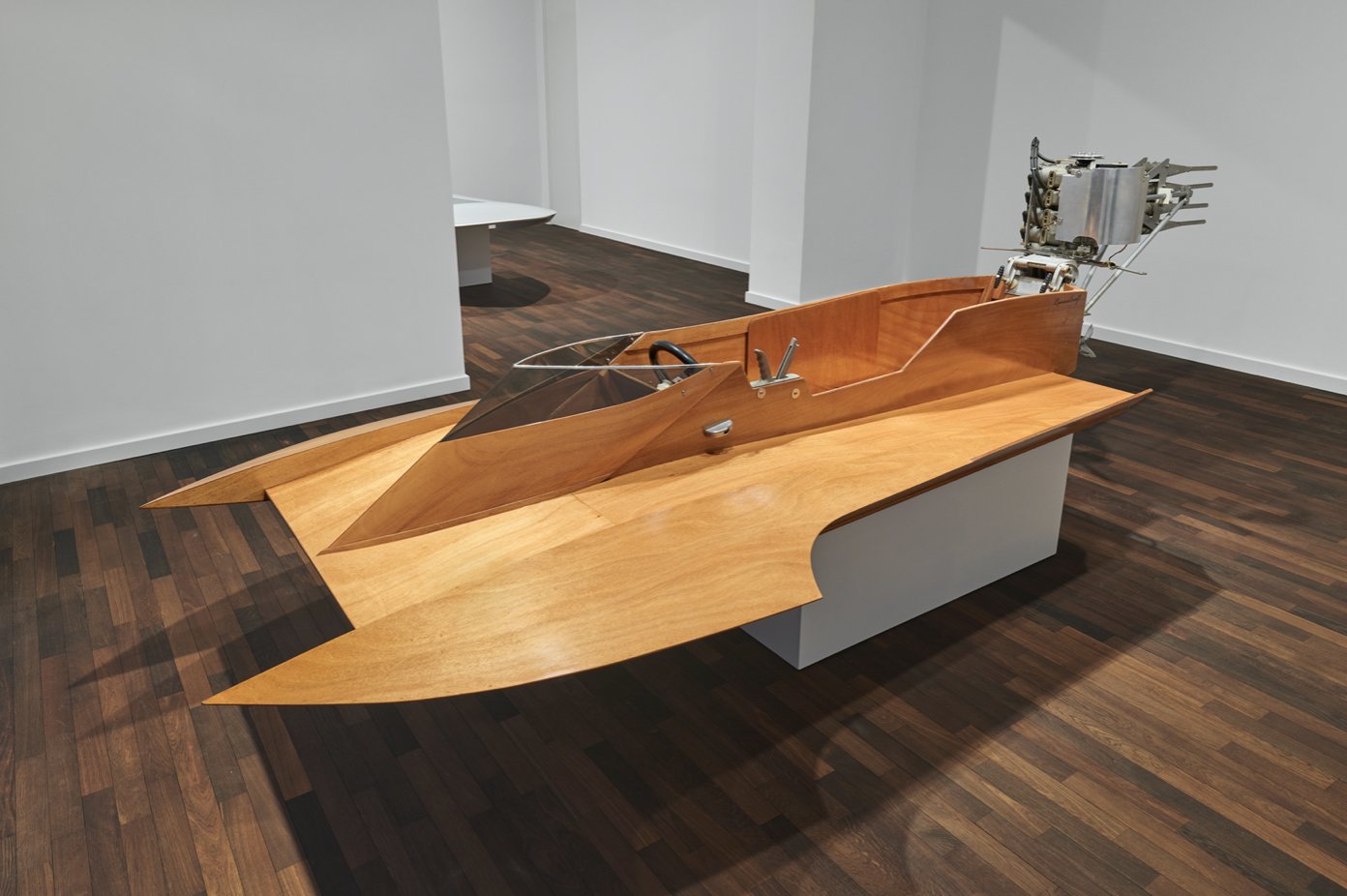 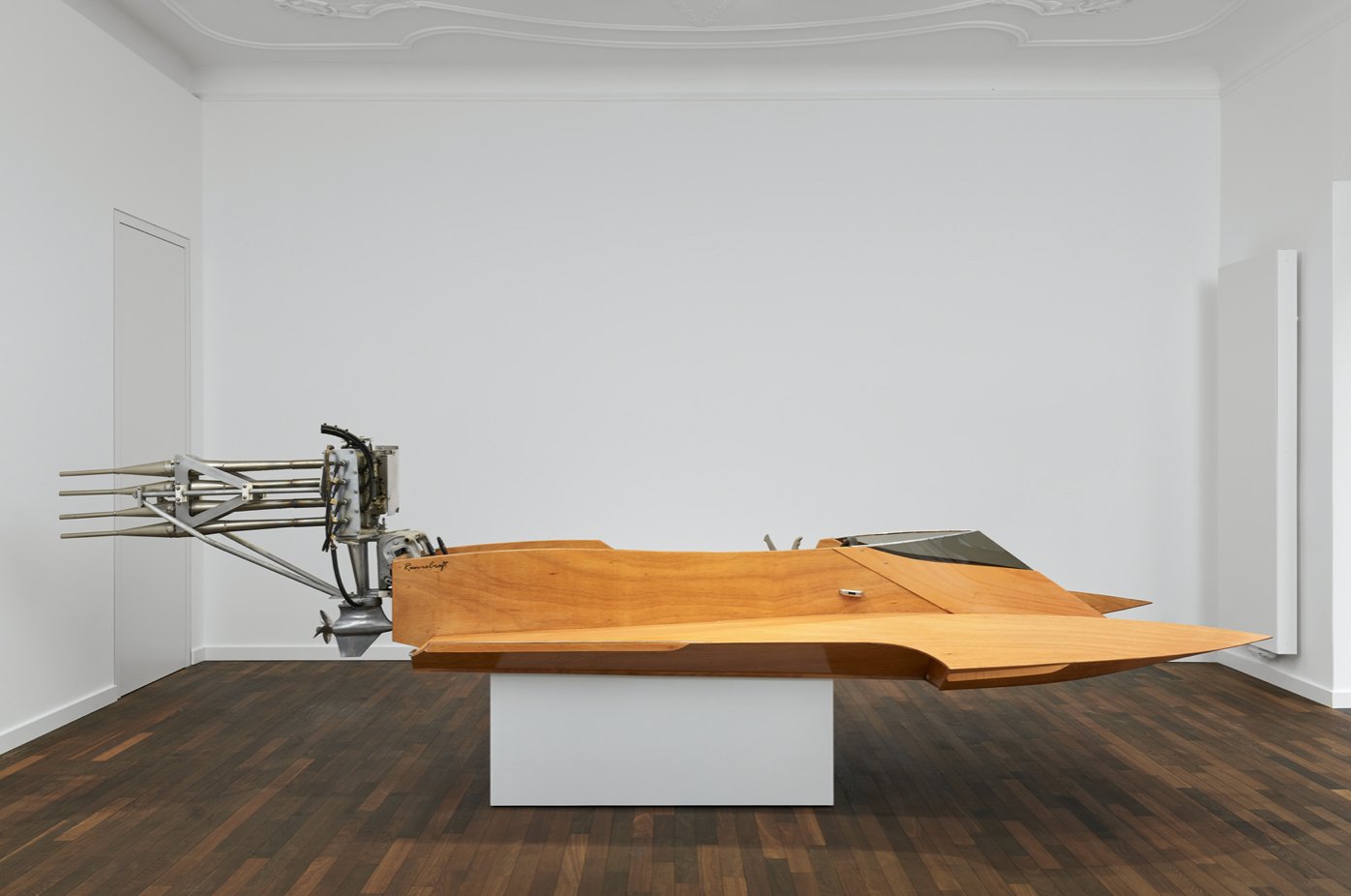 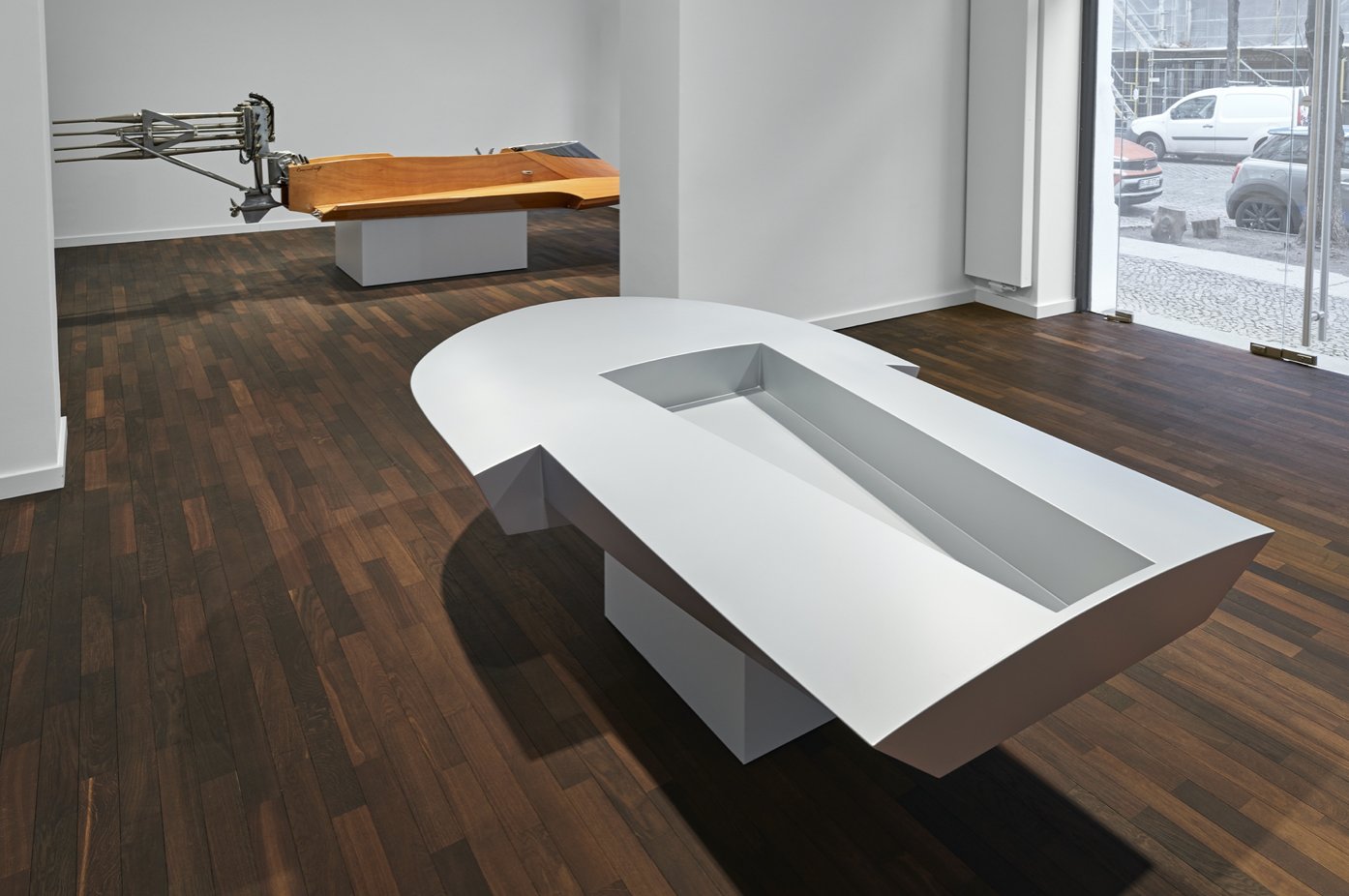 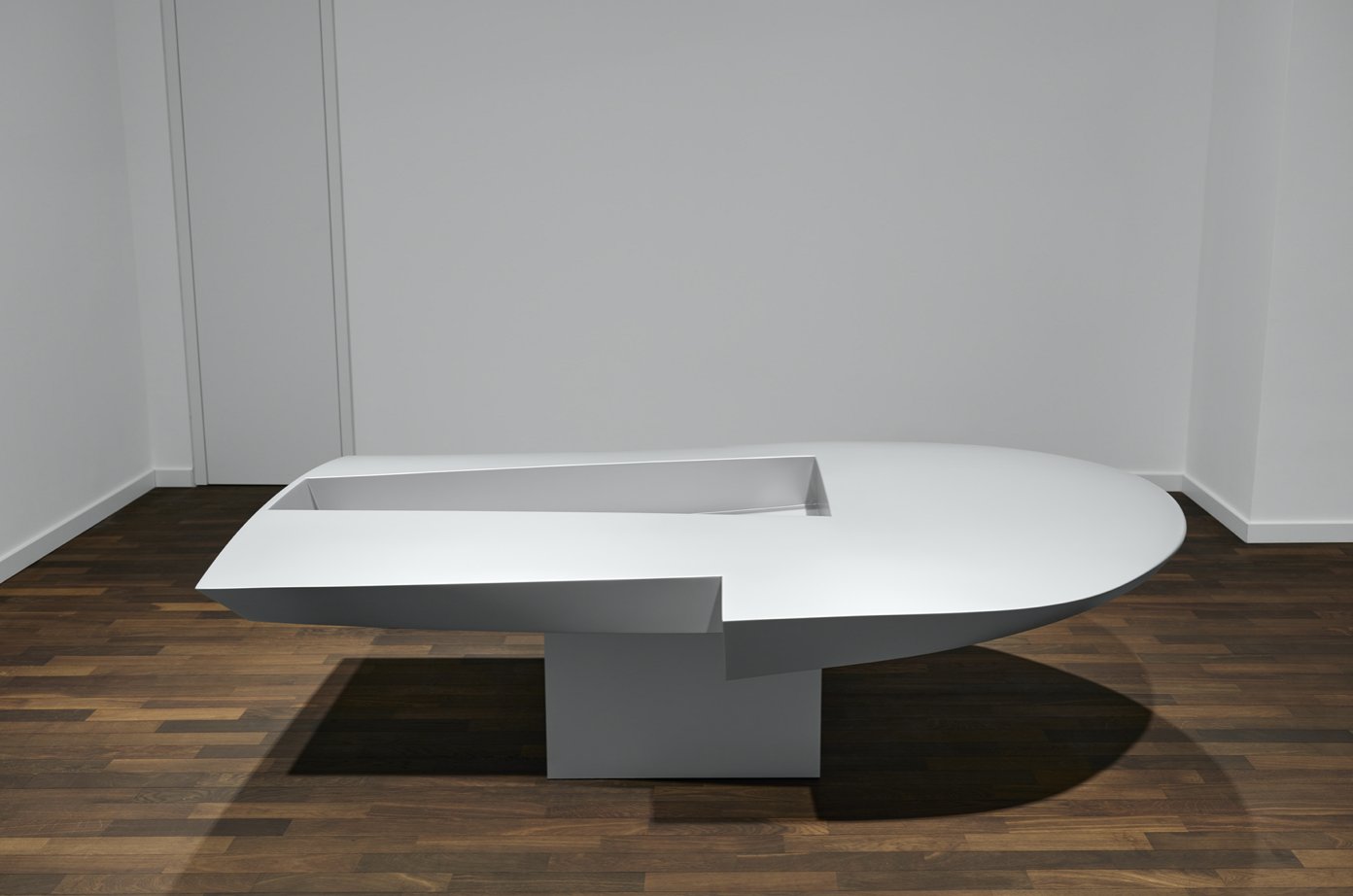 Since the mid-1960s, Robert Grosvenor has created a diverse oeuvre spanning sculpture, photography and drawing. The artist is especially known for his audacious sculptures and objects which straddle the line between art, engineering and architecture, and which he describes as “ideas that operate between floor and ceiling.” (1) Parallels have often been drawn between his work – which is simple and often geometric in character – and that of Minimalist figures. However, whilst Grosvenor was included in seminal exhibitions of the movement in the 1960s, he refutes Minimalism’s programmatic claims, and favours instead, a sensual directness. Due to the absence of a trademark form, material or concept in his practice, as well as an unwillingness to rationalise his works through language, Grosvenor’s artistic output remains elusive and hard to pin down.

In this exhibition, two pieces offer an insight into Grosvenor’s distinctive sculptural work. Untitled, 2014, a so-called hydroplane, consists of a variety of materials such as wood, fibreglass, aluminium and steel, and captivates through its futuristic appearance. Curator, Bob Nickas, describes it as “a boat that might have roared across the Salt Flats when it was submerged as Lake Bonneville some twenty thousand years ago”. He continues, “this is an utterly fantastic object, like nothing we’ve seen before. Its raised motor resembles a deadly, gnarly weapon, in distinct contrast to the soft tones of its wood body and surfboard-like wings.” (2)

The other work in the exhibition, Untitled, 2015-2019, a sci-fi-esque shape evocative of a boat, or futuristic car, seduces the viewer with its pristine, matte grey surface. Elevated from the ground by a white plinth, it seems to hover, in between mass and line, stillness and movement.

Aerodynamic forms recur in Grosvenor’s practice, and characterise pivotal works such as the gravity-defying Tenerife from 1966, now in the collection of the Whitney Museum of American Art, New York. Recently, when asked about his inspiration for this work—a monumental, lacquered wing-like element which emerges from the ceiling—the artist responded: “I was specifically interested in the work’s height above the floor, and its relationship to somebody next to it.” (3) Paradigmatic of Grosvenor’s interest in how a work engages with its environment, Untitled, 2015-2019, equally draws its power from the ludic tension it fosters between its form, the space, and the viewer, heightened by the sensuous character of the material.

Robert Grosvenor (*1937, New York) lives and works in East Patchogue. Solo exhibitions of Grosvenor‘s work have been held in international institutions, such as the Institute of Contemporary Art, Miami (2019 and 2021); The Renaissance Society, Chicago (2017); Fundação de Serralves, Porto (2005); The Arts Club, Chicago (2003); and Kunsthalle Bern (1992), among others.

Courtesy of the artist and Galerie Max Hetzler