“On a tiny star in a galaxy, even tinier creatures continue to carry out their own roles. All under the light of the sun; All maintaining a fragile balance, like walking over thin ice; All while searching for beauty, as if in prayer; All protected, with each of their realms continuing to endlessly overlap with one another.” – Rinko Kawauchi

Christophe Guye Galerie presents the second solo exhibition with the latest works of Rinko Kawauchi (*1972, Japan) at the gallery. In recent years, her work has started to develop further and further afield from her earlier endeavours focusing on delicate everyday occurrences and subjects. 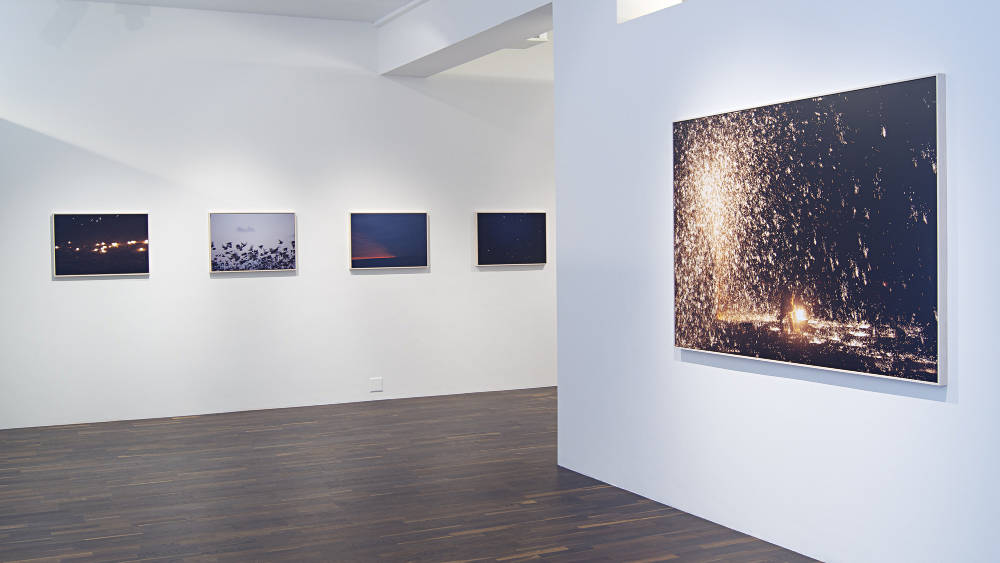 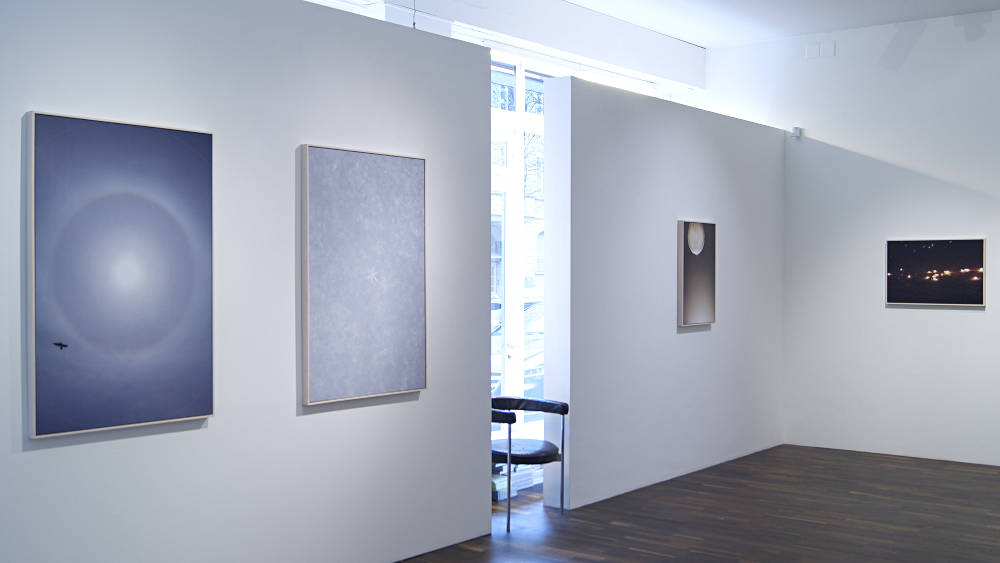 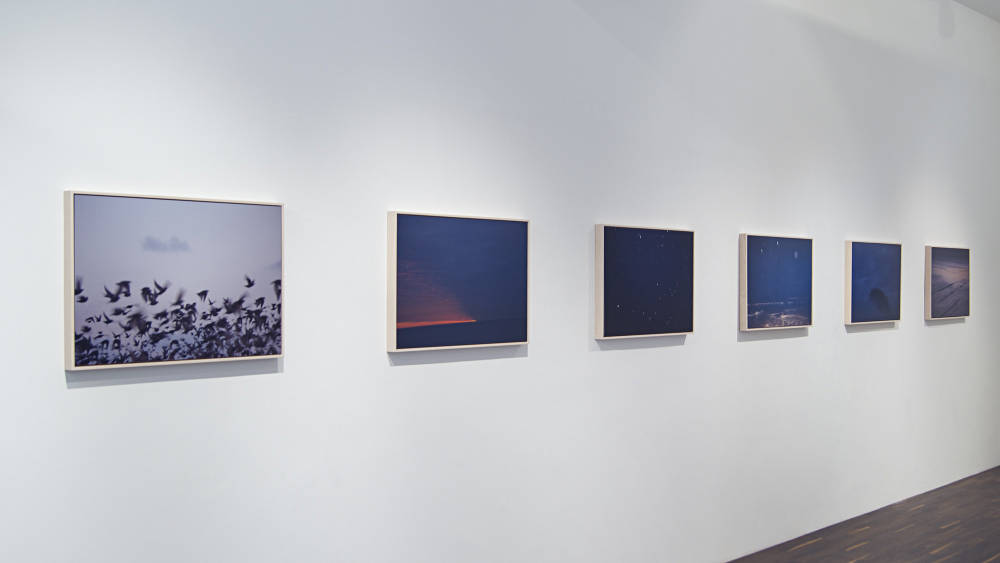 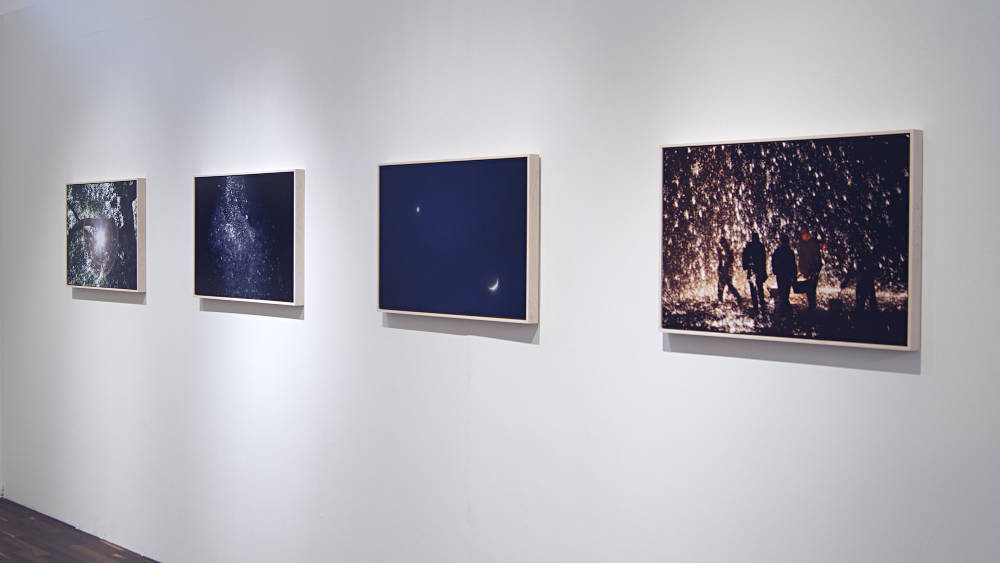 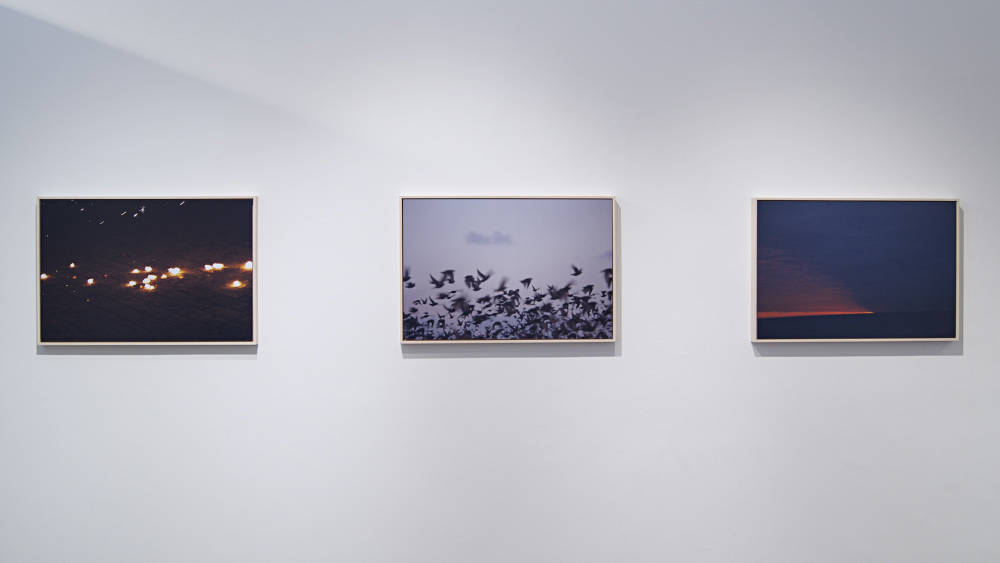 With ‘Halo’ Rinko Kawauchi expands her exploration of spirituality that she started in 2013 with her series and book ‘Ametsuchi’. In these works, she mainly focused on the volcanic landscape of Japan’s Mount Aso – the Shinto rituals she observed there becoming her anchor for further explorations.

The ‘Halo’ series is made up of three interwoven sections, focusing on differing spiritual traditions. One of the three depicts the “…countless numbers of migratory birds [to] appear throughout Europe [in wintertime]. …Their movements almost resemble a dance. It is said that this activity serves to stave predators away, although only birds know why they behave this way. … The smaller flocks, one by one, come together to create a massive, collective body—this phenomenon comes to resemble human society itself. Their movements create the appearance of a great, shifting shadow. It is like feeling the unidentifiable power brought about by being part of a great crowd.“

Another part of the series depicts the festival ‚DaShuhua’ in the Hebei province in China. The festival has been around for many centuries and originated when people began to throw molten iron against the city walls. The sparks coming off and forming a rain of light served as the poor people’s equivalent to beautiful yet expensive fireworks. „For those who live in poverty, every day is a battle in its own way—perhaps it’s only natural that this ritual reminds one of a struggle.“ Still today each one of us faces their own difficulties, invisible to the eye yet incredibely real to the affected person. „In spite of these dire conditions, we still find ourselves yearning to witness beauty.“

During the tenth month of the Japanese lunar calendar, the Shinto gods are absent from their usual spots around Japan – which is reflected in the month’s name ‚Kannazuki’. They come together in the Izumo region – the only region where the tenth month is called ‚Kamiarizuki’, meaning ‚the month when the gods are present’. During this time, a festival takes place in Izumo, called ‚Kami Mukae Sai’, where people welcome the gods with sacred flames lighting up the shores as spectators watch. „I fix my eyes on the pitch-dark sea, and feel as if the dark ocean was asking me: Did you find what you were looking for? I find no answer. Instead, I click the shutter button. The lights strobe and refract against the raindrops, and they glitter. The thoughts of the people in prayer, invisible to the human eye, too, take form and reflect in the drops.“

Kawauchi burst on the international scene in 2001 when she was awarded the Kimura-Ihei-Prize, Japan’s most important emerging talent photography prize, shortly followed by the simultaneous publication of three beautiful books, Utatane (Catnap), Hanabi (Fireworks), and Hanako, her very personal study of a young girl of the same name.

Kawauchi, currently one of the most famed contemporary female Asian artists, is a recipient the eminent Annual Infinity Award (2009) from New York’s International Centre of Photography, in the category Art, and similarly was shortlisted in 2012 for the Deutsche Börse Photography Prize. She has joined and held many group and solo shows both at home and abroad, with major solo exhibitions in the Fondation Cartier pour l’art Contemporain in Paris, London’s The Photographers’ Gallery, the Hasselblad Centre in Gothenburg, Semear Museu de Arte Moderna de Sao Paulo, the Vangi Sculpture Garden Museum in Shizuoka, or Brussels’ ARGOS Centre for Art & Media.

In conjunction with the exhibition her latest book ‘Halo’ will be published. It is her latest publication and will be released in June 2017.