“MY PARENTS KEPT ME IN A CLOSET. UNTIL I WAS FIFTEEN I THOUGHT I WAS A SUIT.

I made some gang jokes but pretty soon I realized that I needed to paint the jokes. So that’s what I did. I found a “subject” that I could paint. I started PAINTING jokes.”

Skarstedt presents an exhibition of early ‘joke paintings’ by American artist Richard Prince at the London gallery this June. Spanning the period 1988 – 1992, this is the first opportunity to view a dedicated exhibition of this important body of work in the UK. 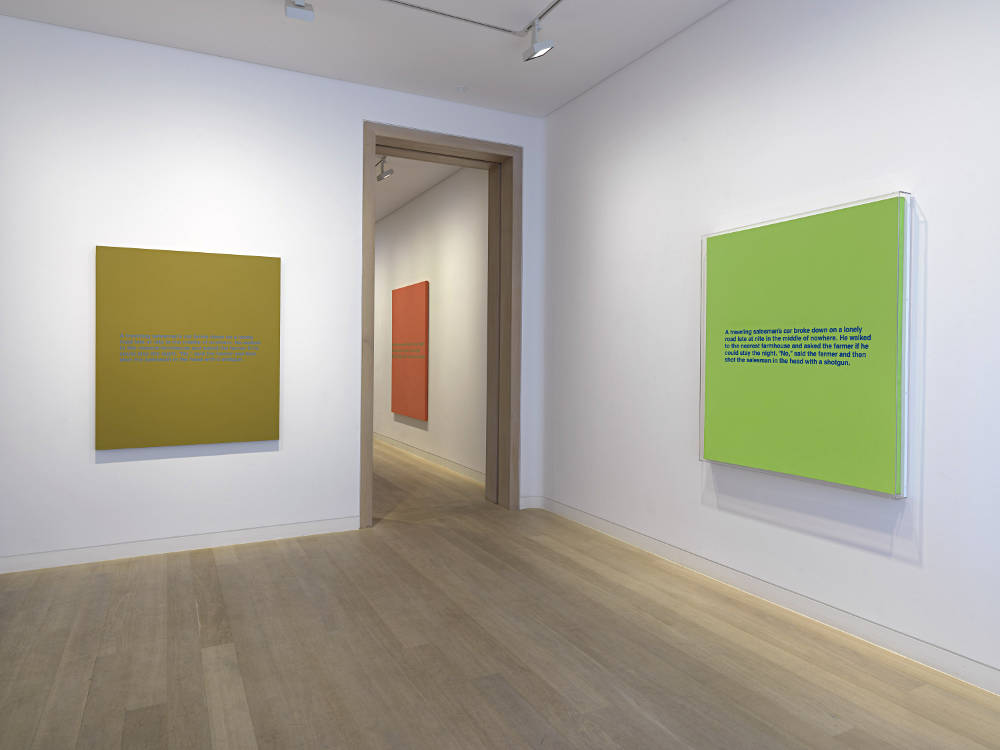 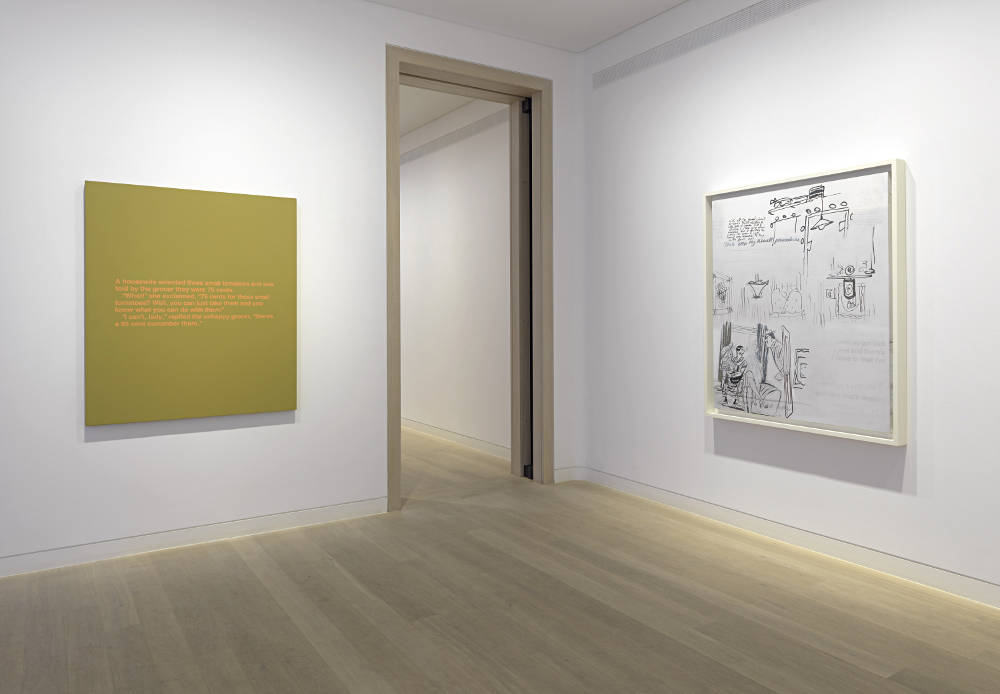 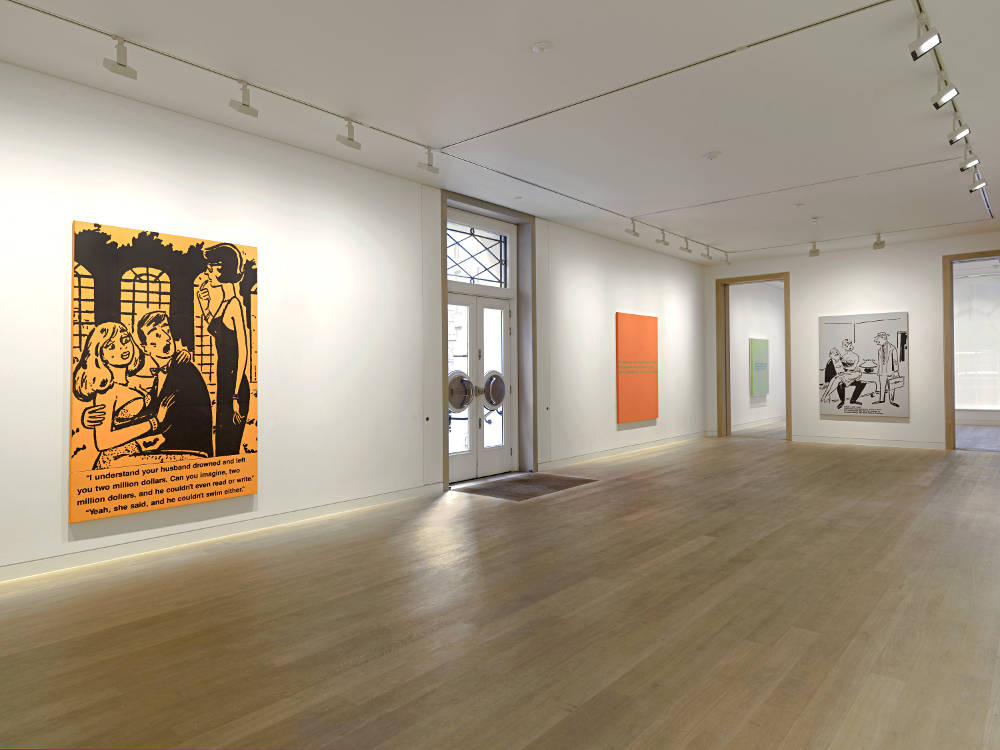 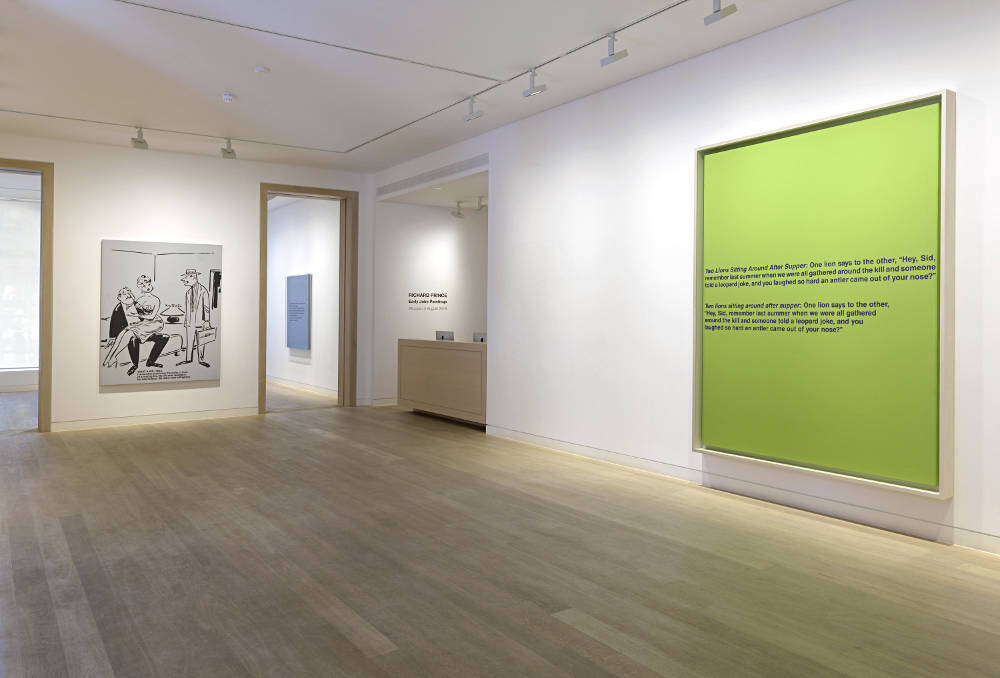 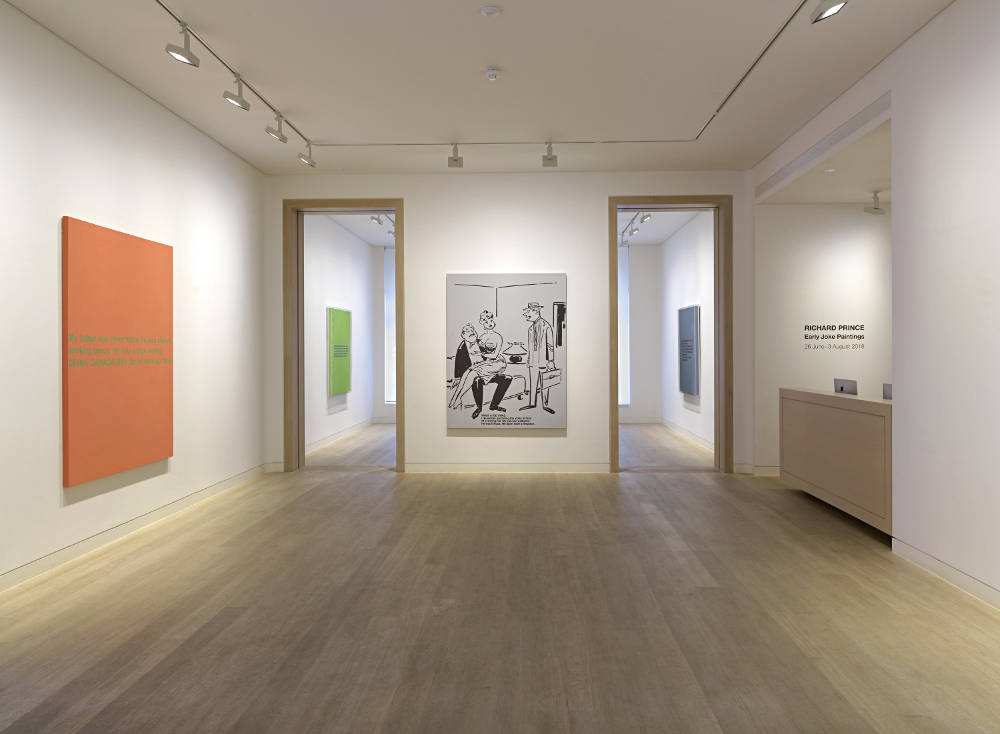 Beginning in 1984, Richard Prince began assembling one-line gag cartoons and ‘borscht belt’ jokes from the 1950s which he redrew onto small pieces of paper. ‘Artists were casting sculptures in bronze, making huge paintings, talking about prices and clothes and cars and spending vast amounts of money. So I wrote jokes on little pieces of paper and sold them for $10 each’.[1] Following the hand-written jokes and subsequent works in which cartoon images were silkscreened onto canvas, in 1987 Prince adopted a more radical, formulaic strategy of mechanically reproducing classic one liners and gags onto a flat monochrome canvas.

Going against the prevailing artistic genre of expressive gestural painting in the 1980s, the silkscreened jokes subvert the formal language of abstract painting, mixing high and low culture. With a block of coloured text on a warm but contrasting background, the monochromatic joke paintings compositionally mimic the Color Field painters of the 1950s and 60s, notably Rothko’s three-tiered compositions in “What a Kid I Was” (3 Times) from 1989. In this work, the repetition of the anecdote highlights the notions of seriality, authorship and mechanical reproduction that is central not only to this series of paintings, but to Prince’s work as a whole. Inspired by his Pop-Art predecessor Ed Ruscha, the contrast of the bright red text against the monochrome surface heightens the optical potential of the words.

‘Within about six months I…started to do the jokes in ‘colors.’ I thought the color would be a substitution for an image. The background would be one color and the joke would be another. I picked jokes that were ‘meaningful’ to me. I don’t know how to explain that except that the jokes’ ‘content’ was something that I could identify with. These ‘jokes’ were later identified as the ‘monochromatic joke paintings.’ I fell into them. I was walking around in a dark room looking for the light switch. I was moving by wading more than swimming. I was mowing the lawn. No direction home. I was caught in a landslide. My headaches were gone. I started painting with my fly open. I stopped crying. I started to laugh. Rock bottom sometimes isn’t the bottom.’[2]

The exhibition includes key works from Prince’s ‘White Paintings’ series executed during the early 1990s. Unlike the monochromatic jokes, these paintings are characterised by their raw energy, mixing gestural marks, overlaid silkscreened imagery and text. Engaging directly with Abstract Expressionism – the dominant painting style of his youth, Prince remixes the same visual elements, analogous to the ‘sampling’ process applied in rap music.

Like the appropriated images in his iconic ‘Cowboy’ series from the early 1980s, which draw on stereotypes of the American dream, the ‘joke paintings’, whether on a monochrome surface or against a white pigmented backdrop, combine two very distinct American references: clean-edged abstraction and popular humour – ‘I never had a penny to my name, so I changed my name.’

Presented with a deadpan sensibility, the ‘joke paintings’ are at once disarmingly immediate and resonant, yet subversive in their underlying intent. Masking hostile and uncomfortable truths beneath a veil of humour, jokes are ‘a serious business’.[3] Using comedy to create distance, Prince’s ‘joke paintings’ riff on received notions of American popular culture, authorship and the myth of the artist.

Richard Prince was born in Panama in 1949. He began consolidating his style of appropriation during the early 1970s, whilst working at Time-Life publishing company in the tear-sheets department. Rising to prominence in the 1980s, he is a celebrated pioneer of a critical approach to art making. Appropriating images and text from advertising and popular culture, his photographs, sculptures and paintings explore ideas of American identity and consumerism, whilst simultaneously challenging ideas of authorship and the privileged status of the unique artwork. Prince’s work has been the subject of solo exhibitions at leading institutions worldwide, including Serpentine Gallery, London; Solomon R. Guggenheim Museum, New York; Whitney Museum of American Art, New York; and IVAM, Valencia amongst others.

Installation view of ‘Richard Prince: Early Joke Paintings' at Skarstedt, London. All artworks © Richard Prince. Images are courtesy of the artist and Skarstedt.