Jokes and cartoons are part of any mainstream magazine. Especially magazines like the New Yorker or Playboy. They’re right up there with the editorial and advertisement and table of contents and letters to the editors. They’re part of the layout, part of the “sights” and “gags!” Sometimes they’re political, sometimes they just make fun of everyday life. Once in a while they drive people to protest and storm foreign embassies and kill people.
– Richard Prince 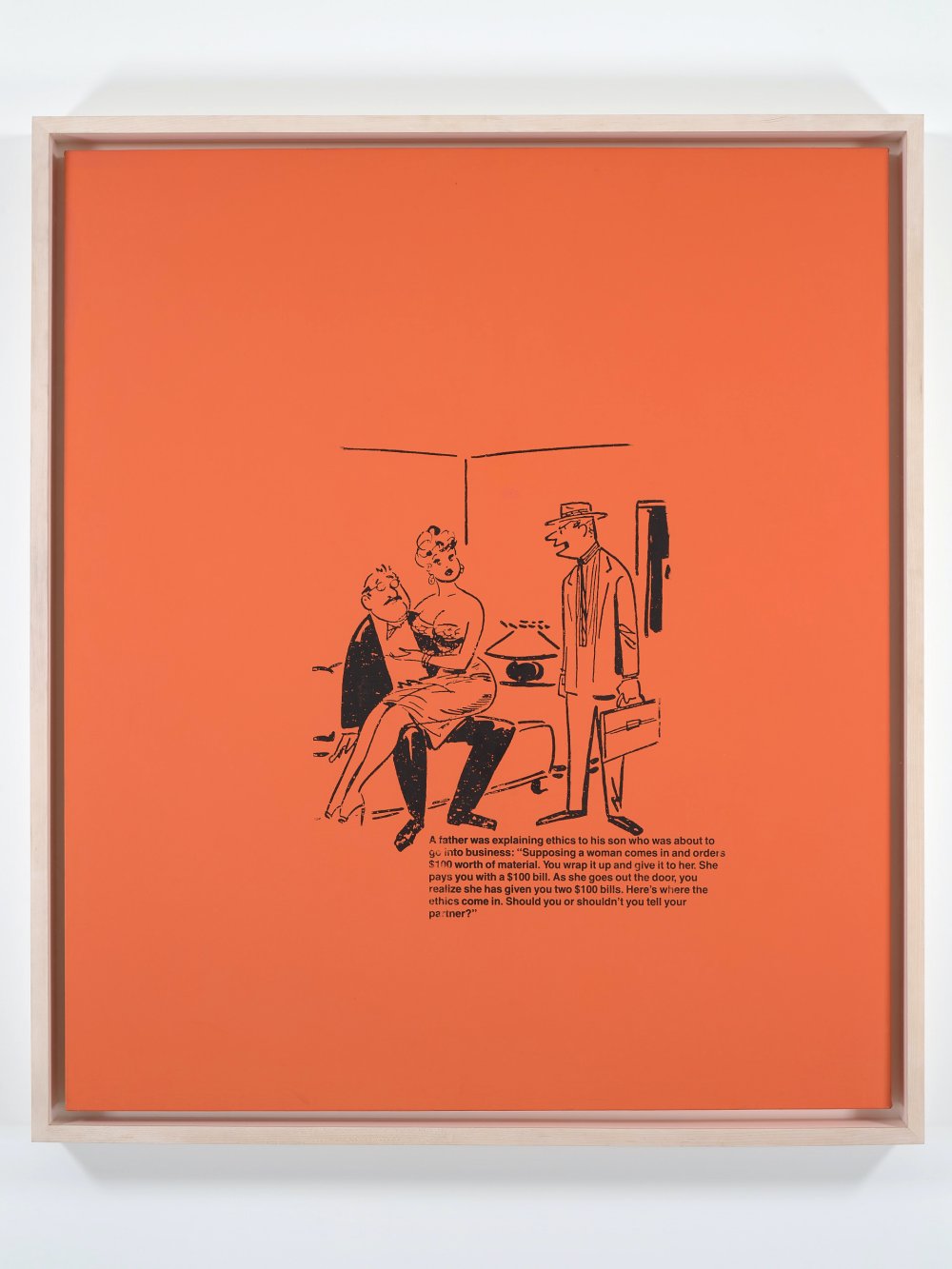 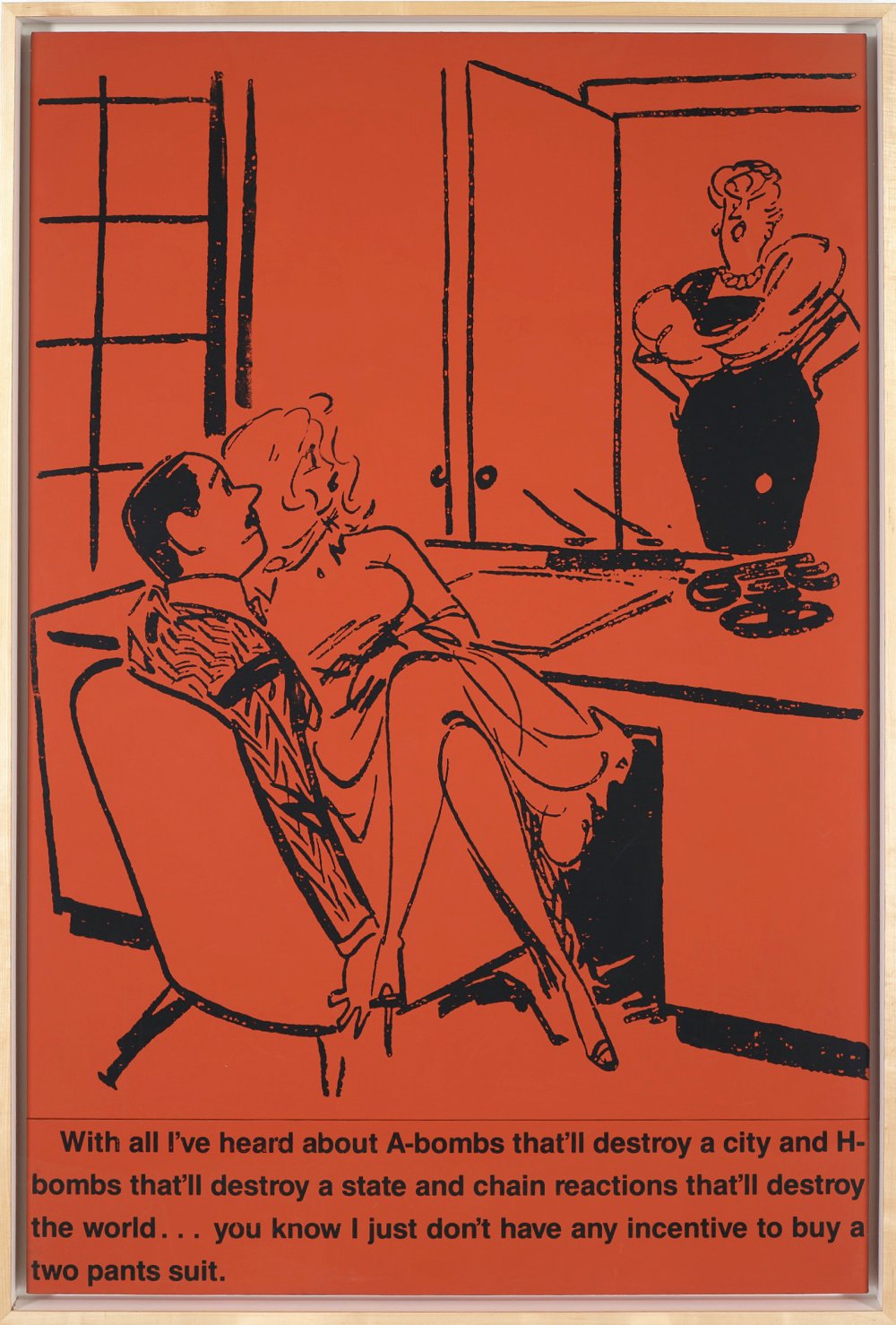 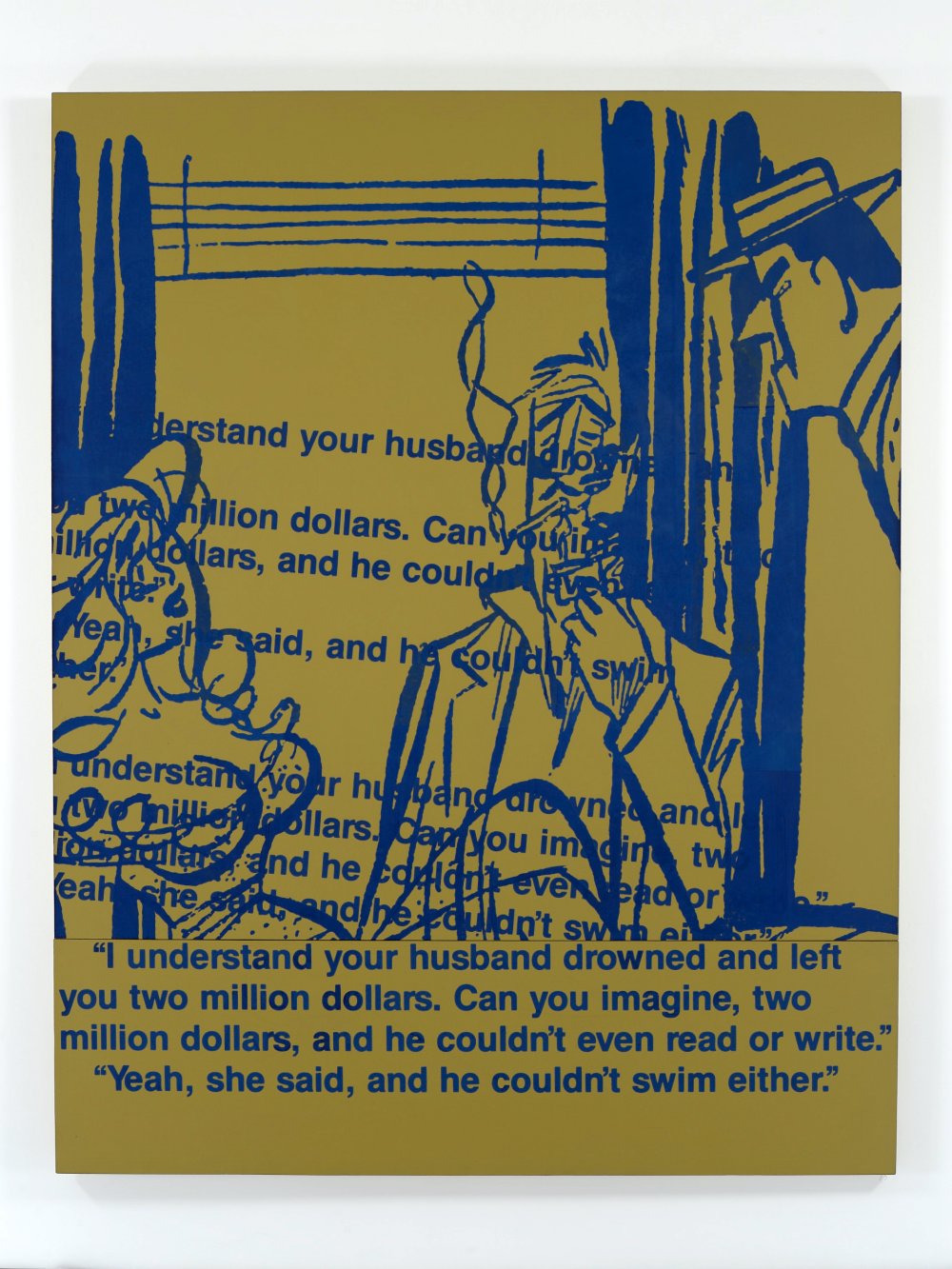 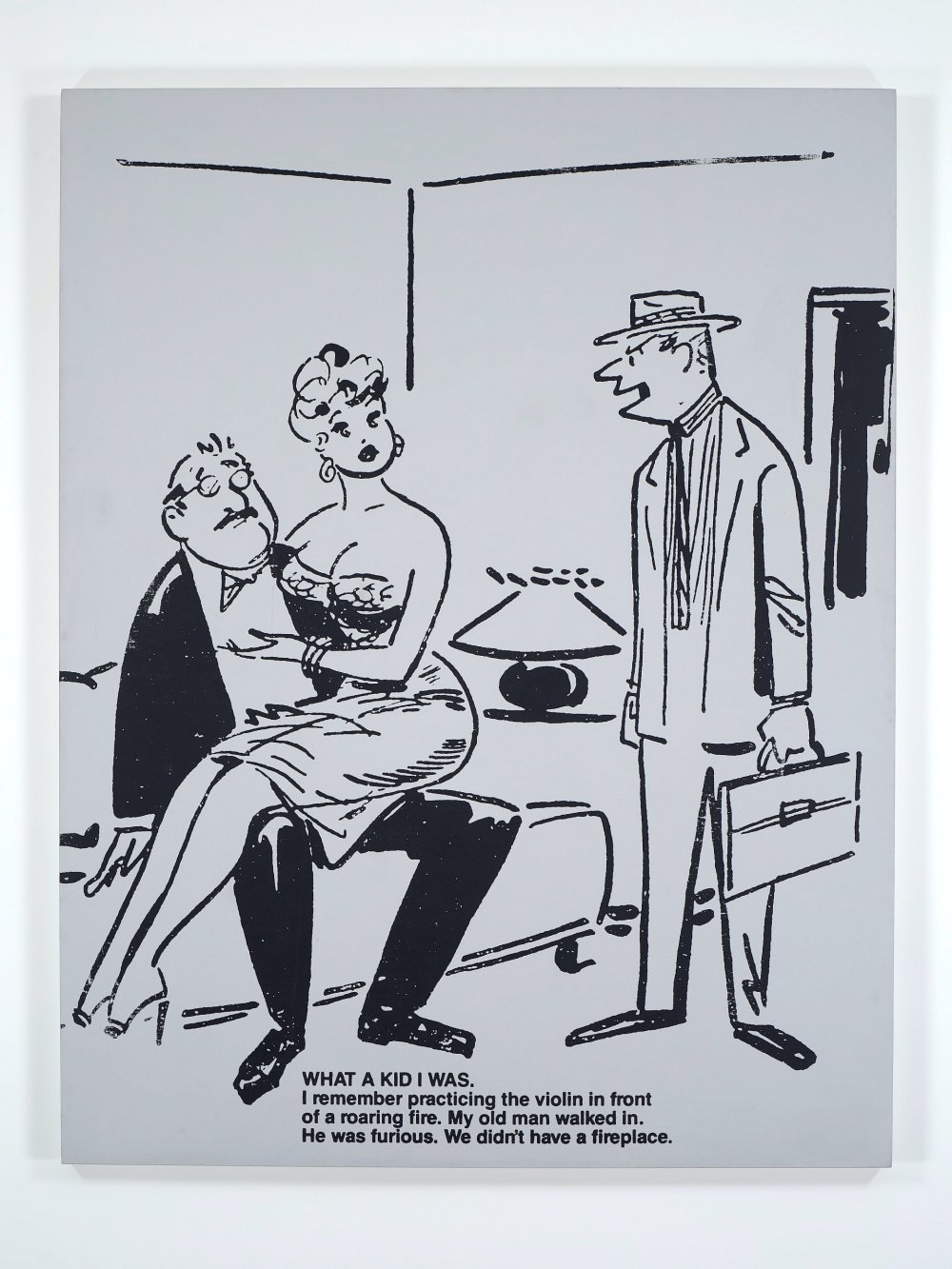 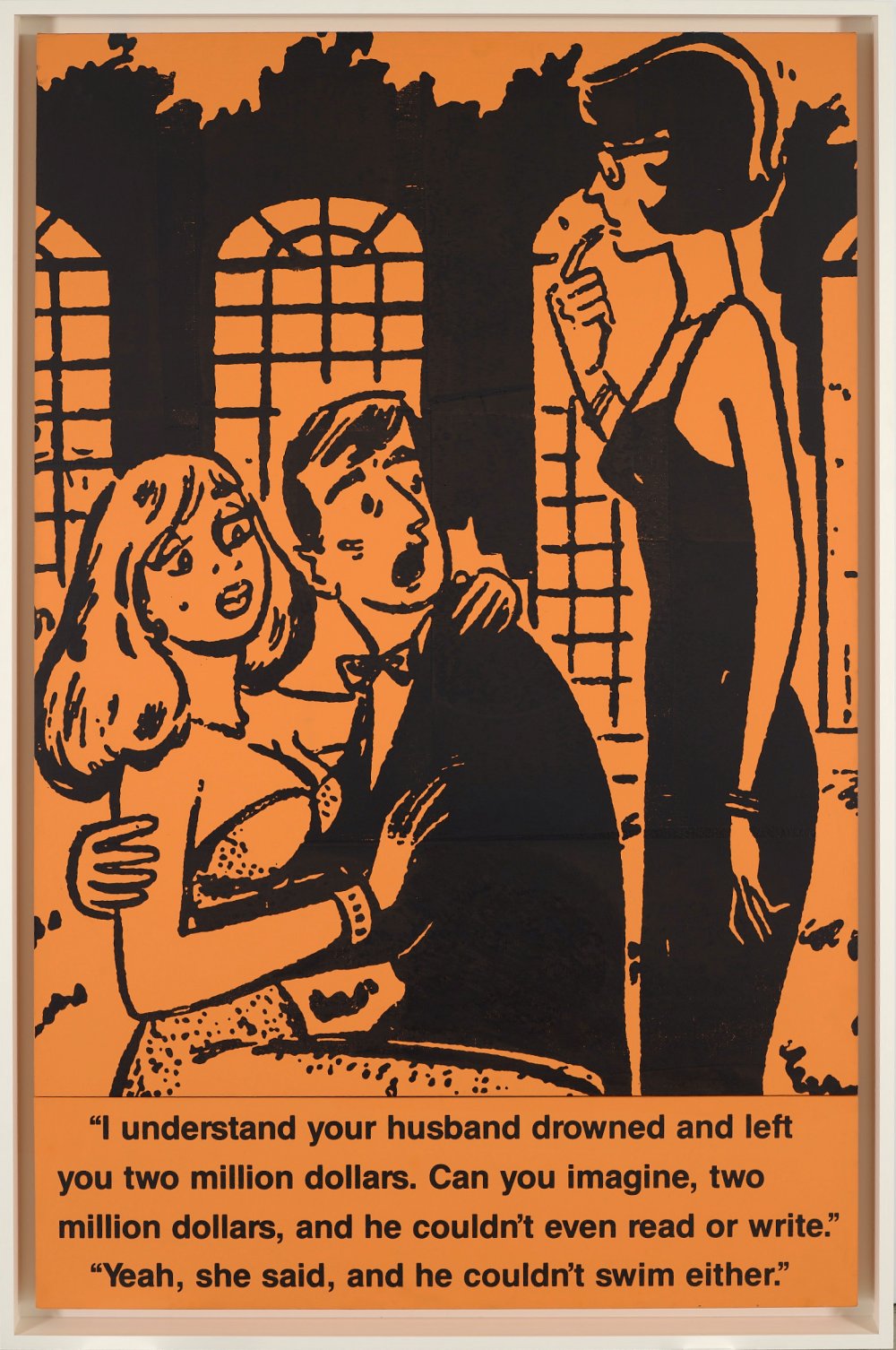 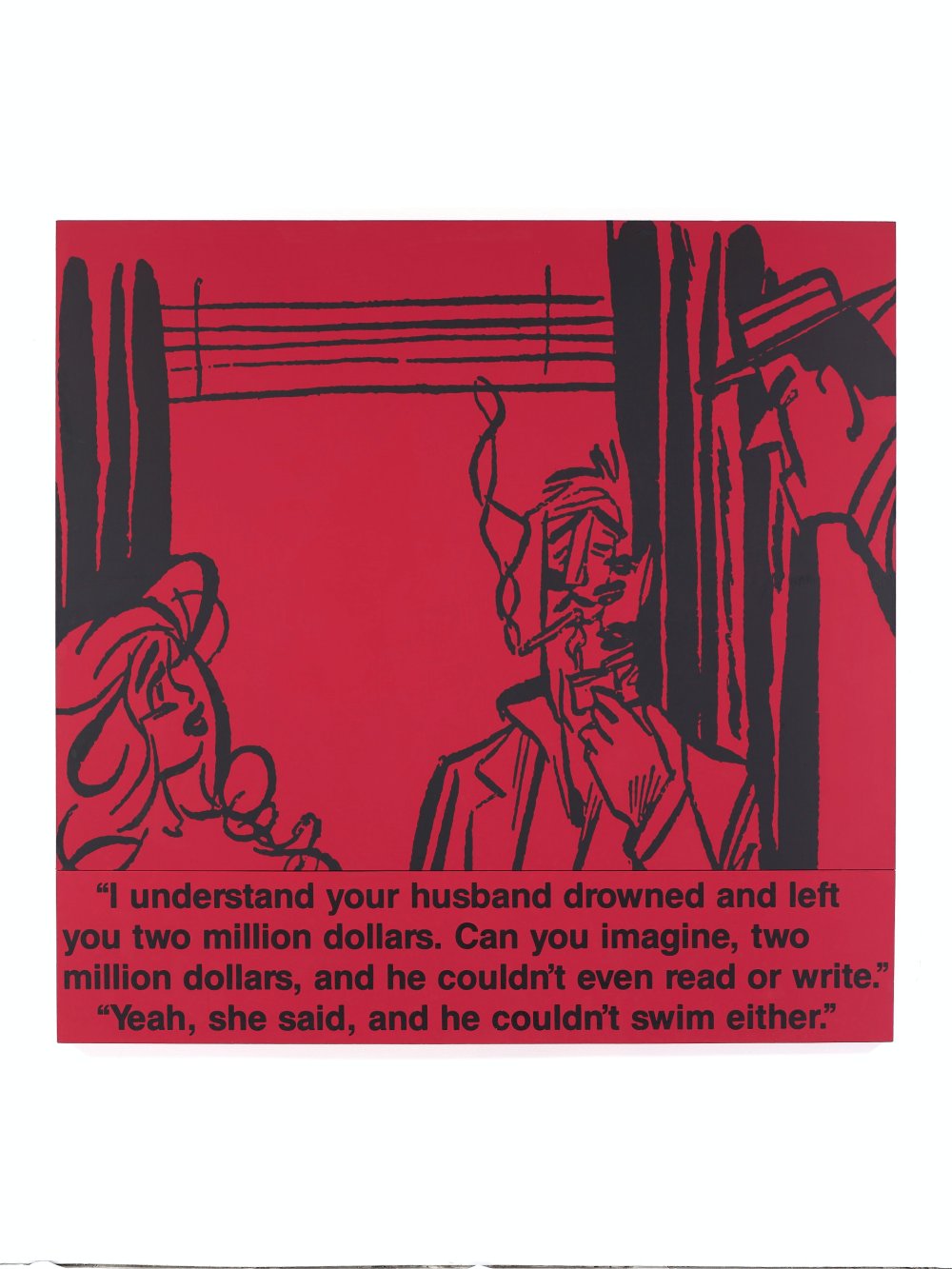 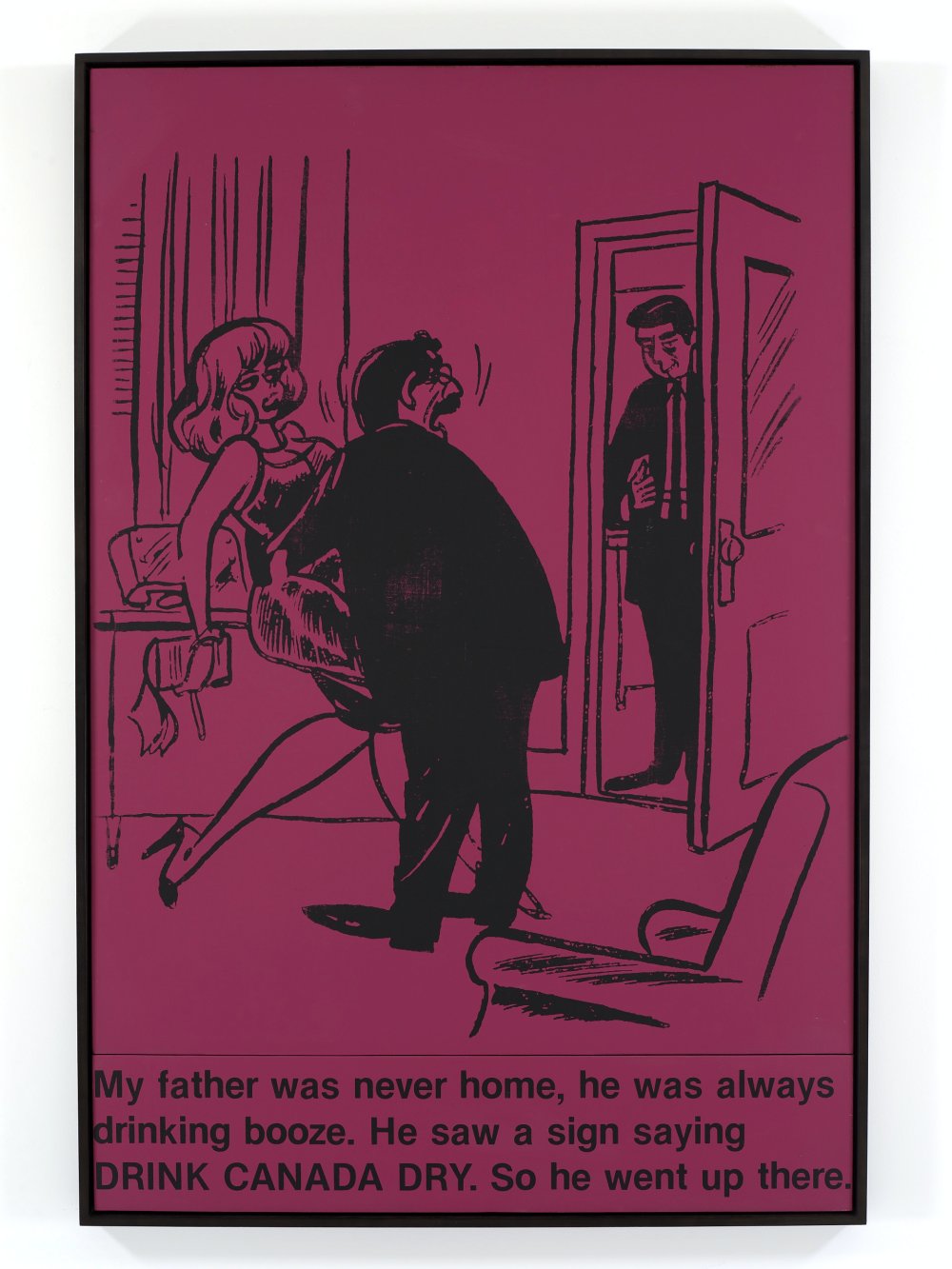 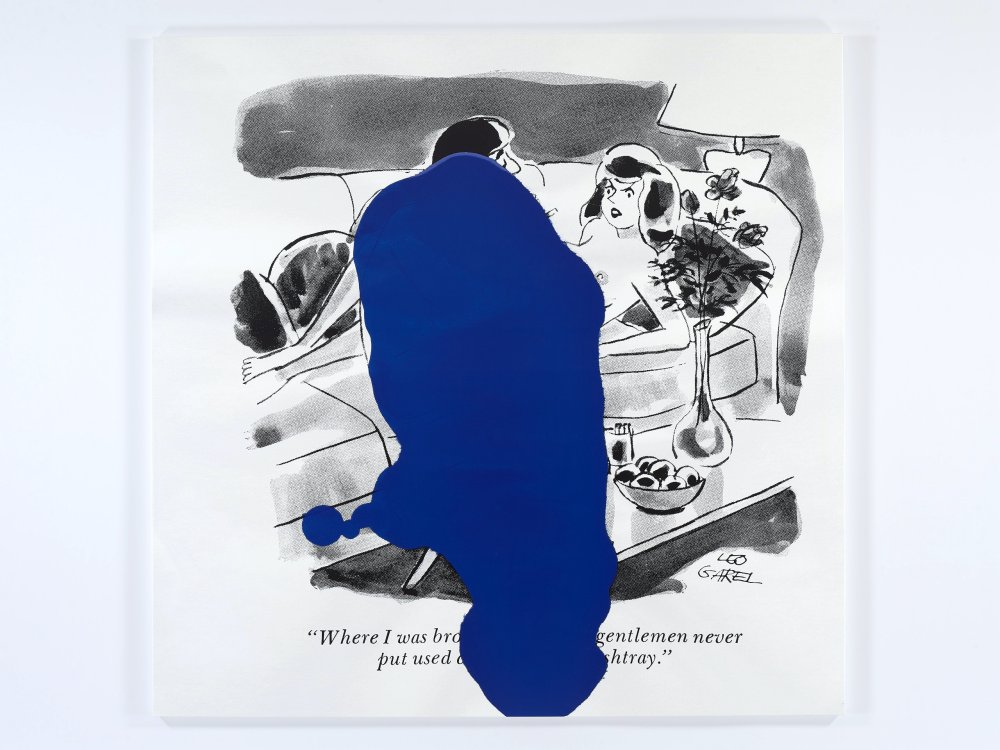 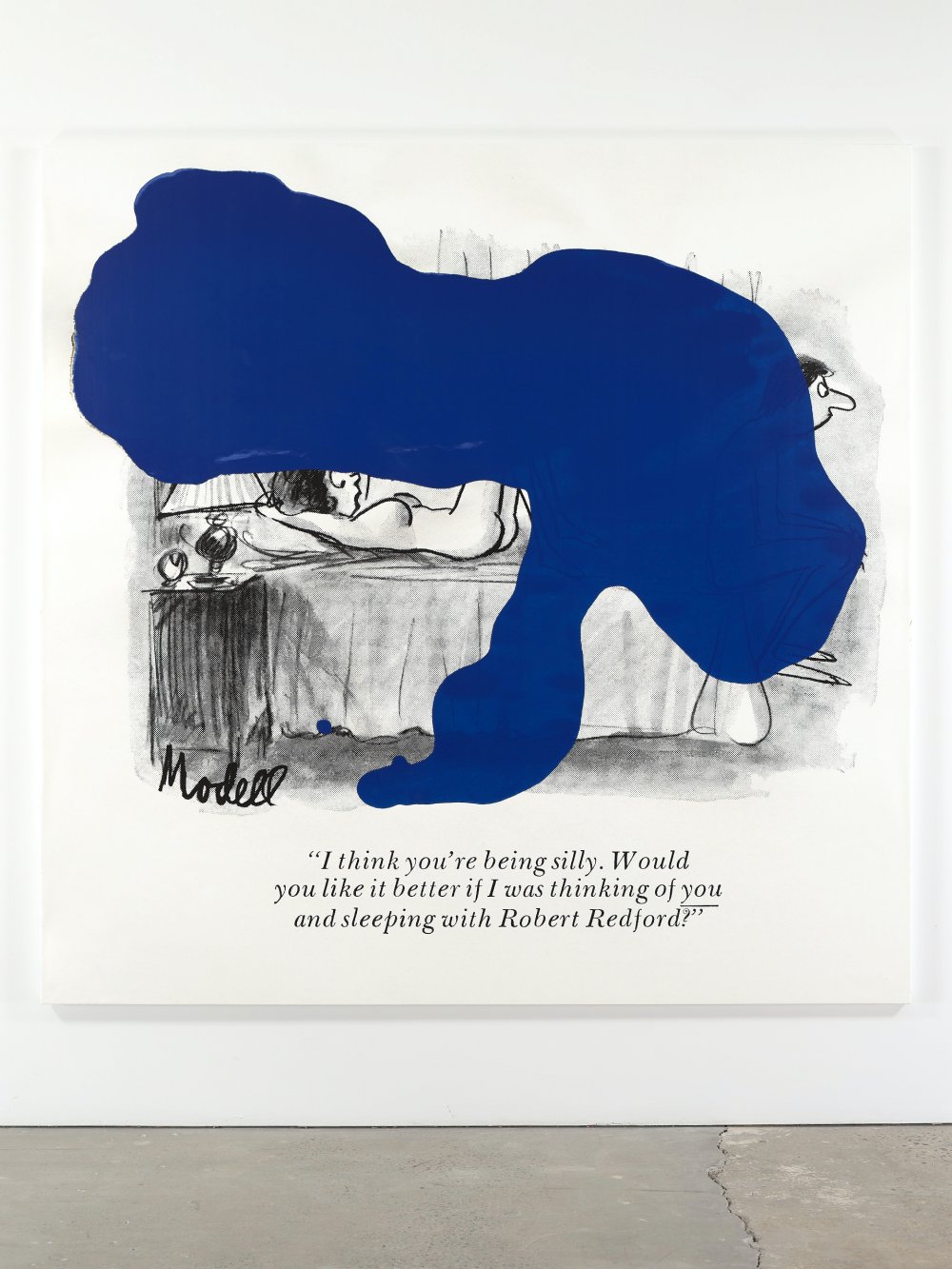 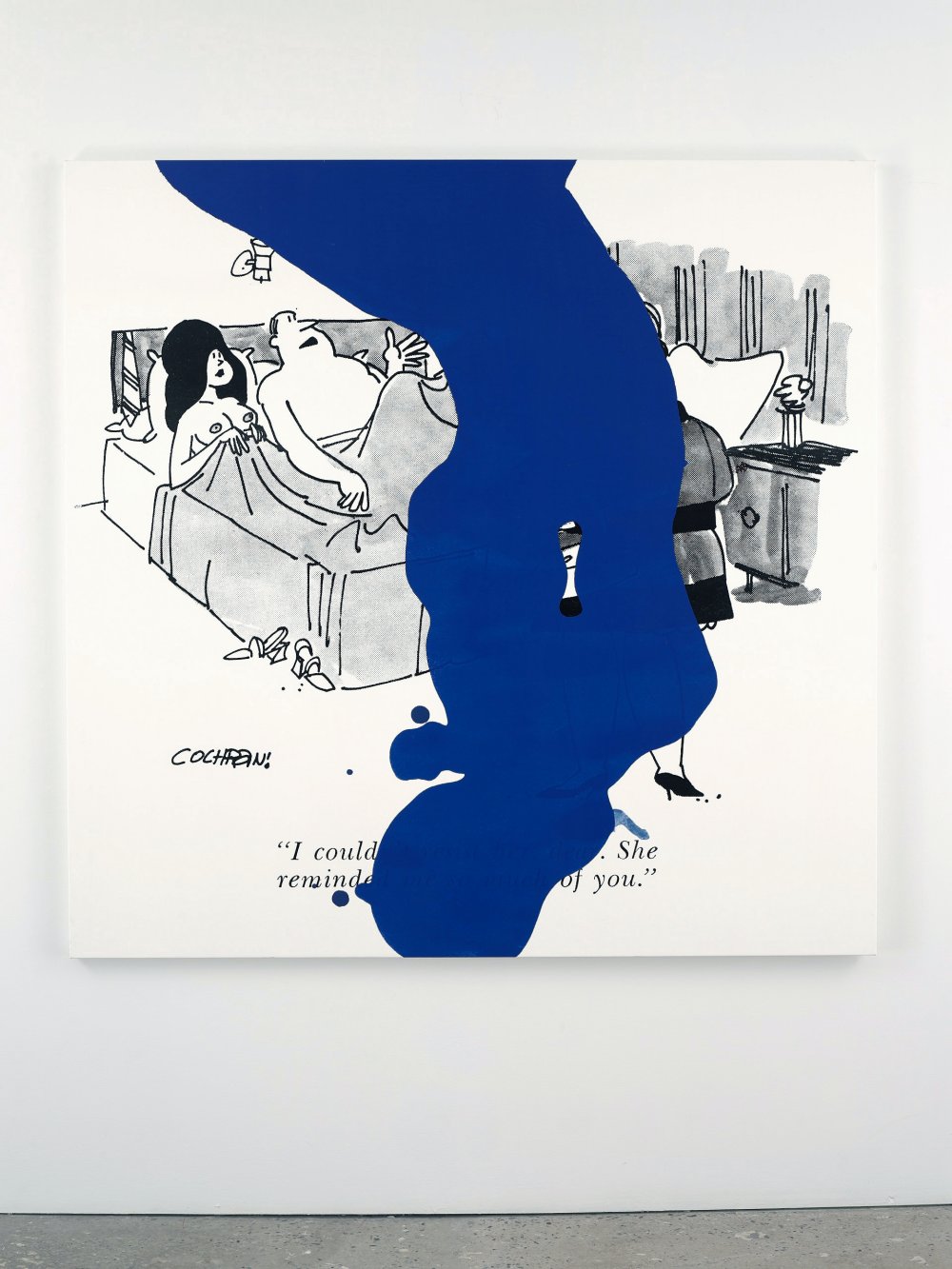 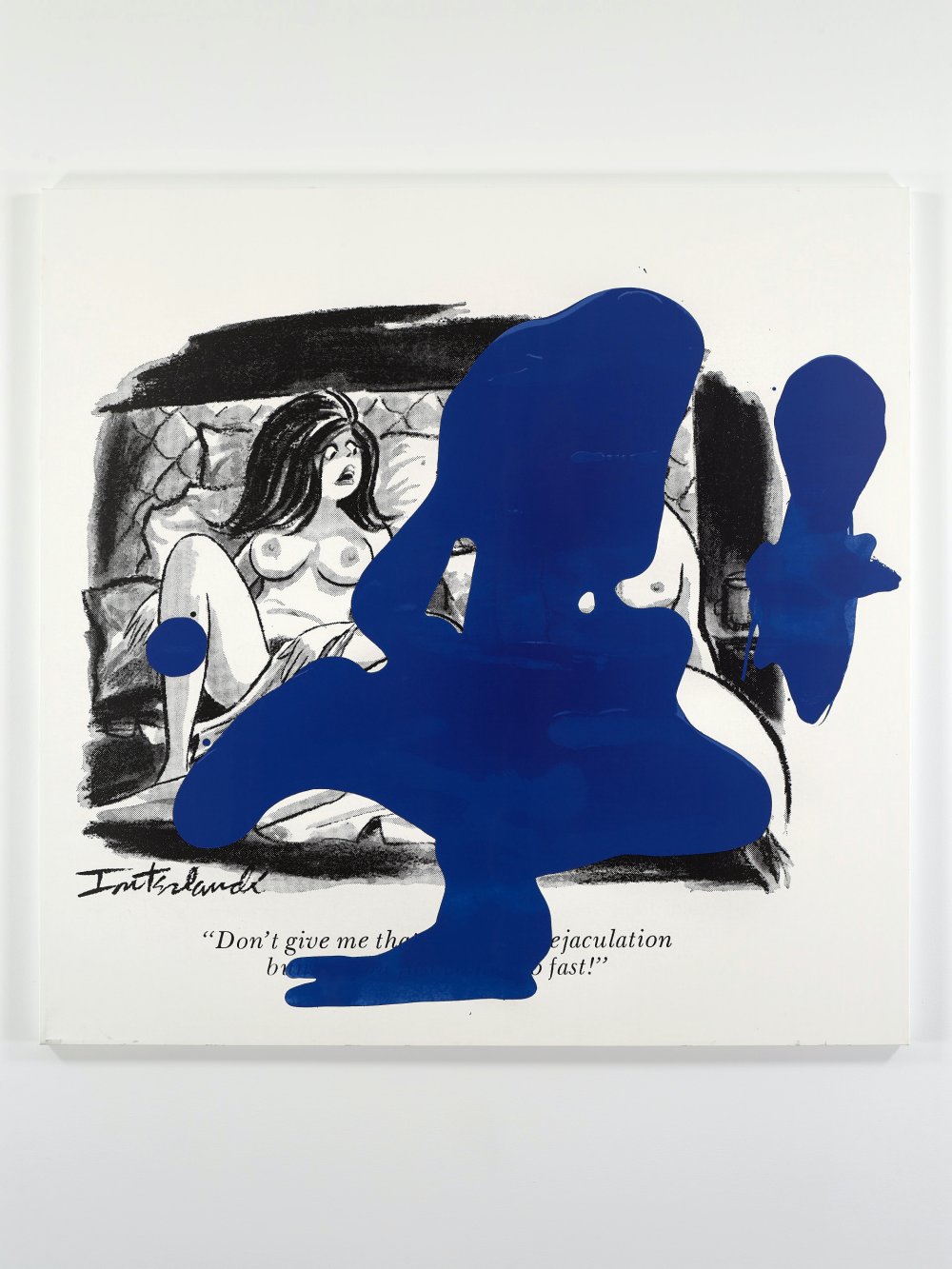 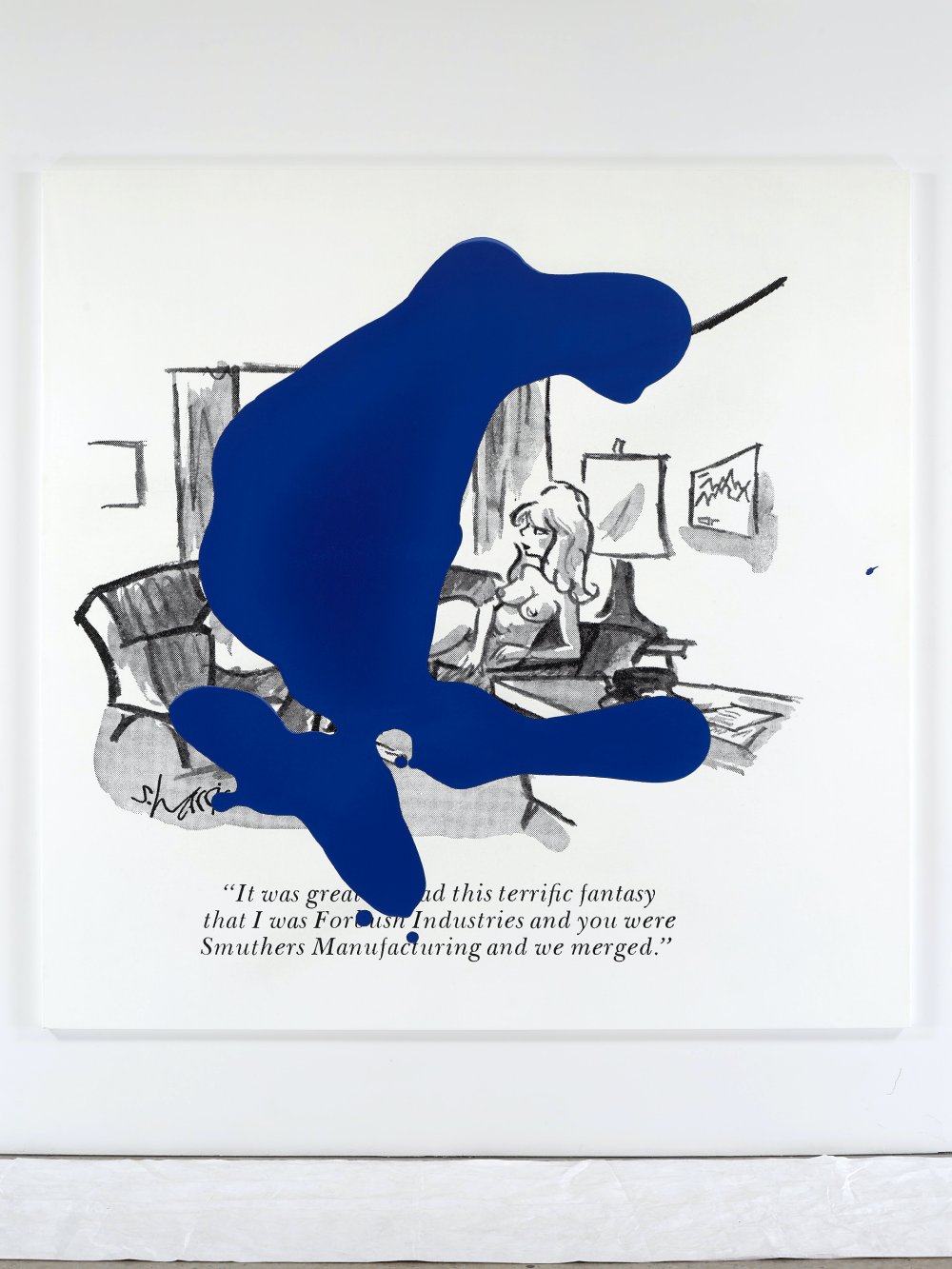 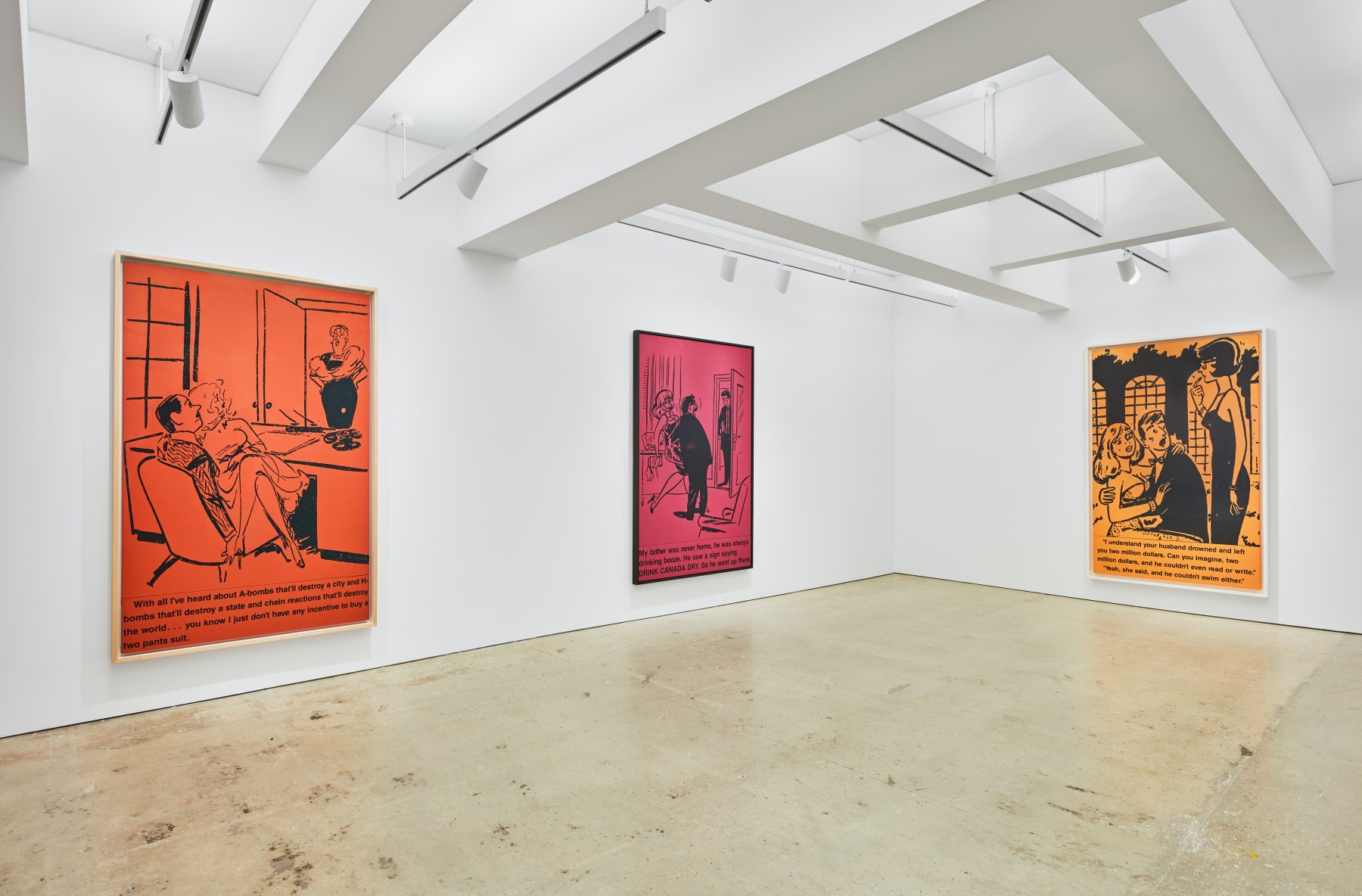 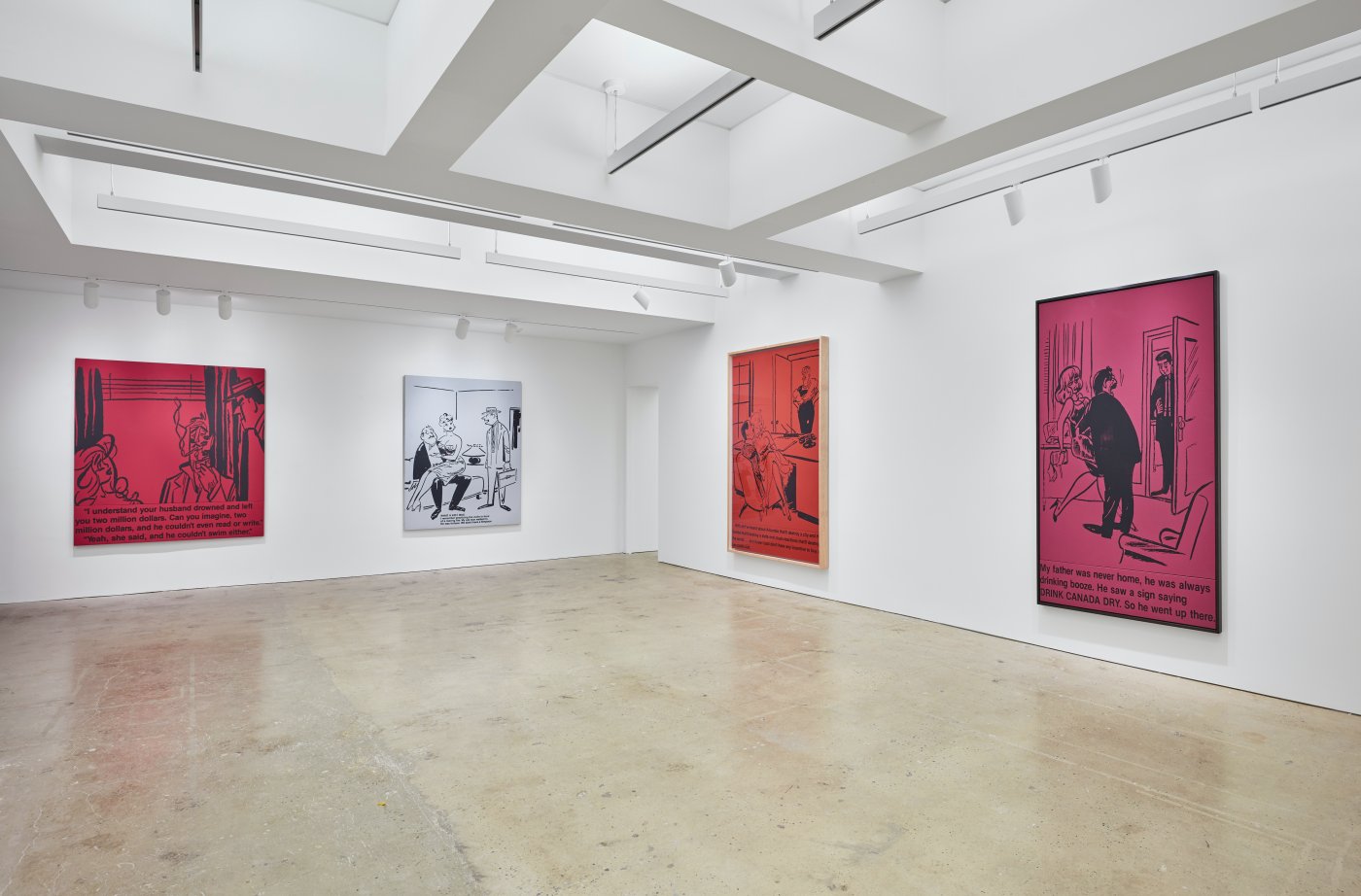 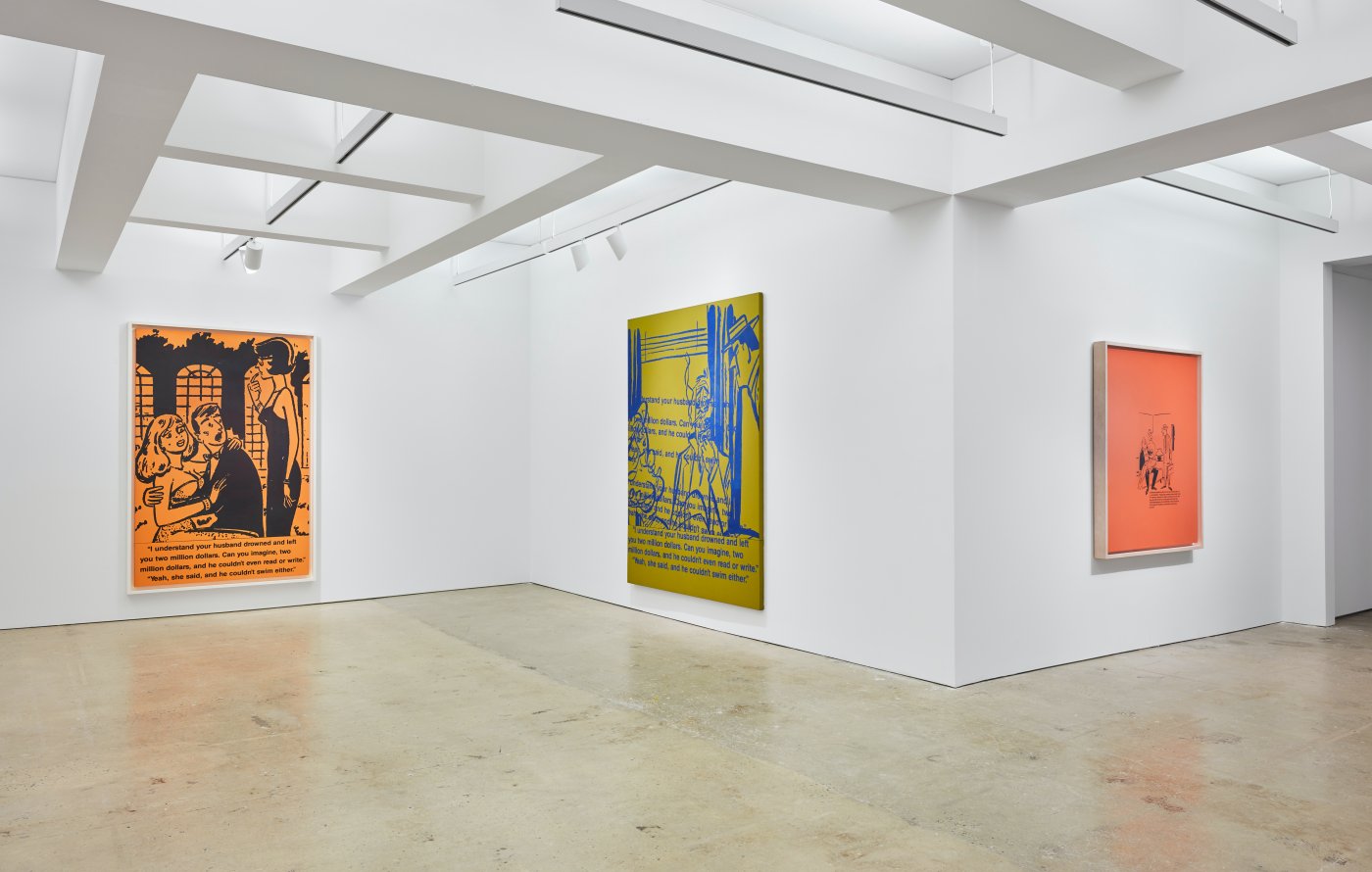 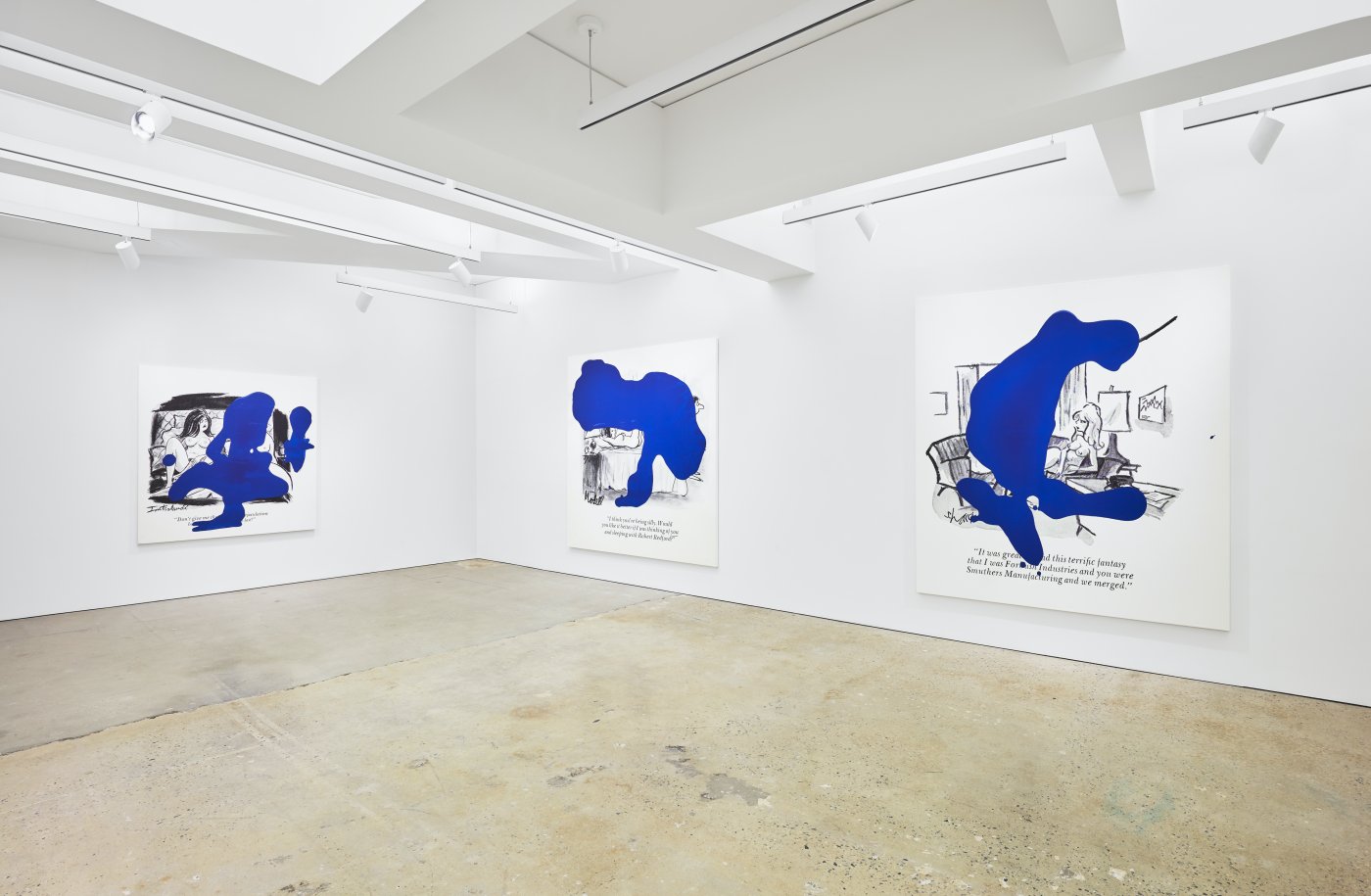 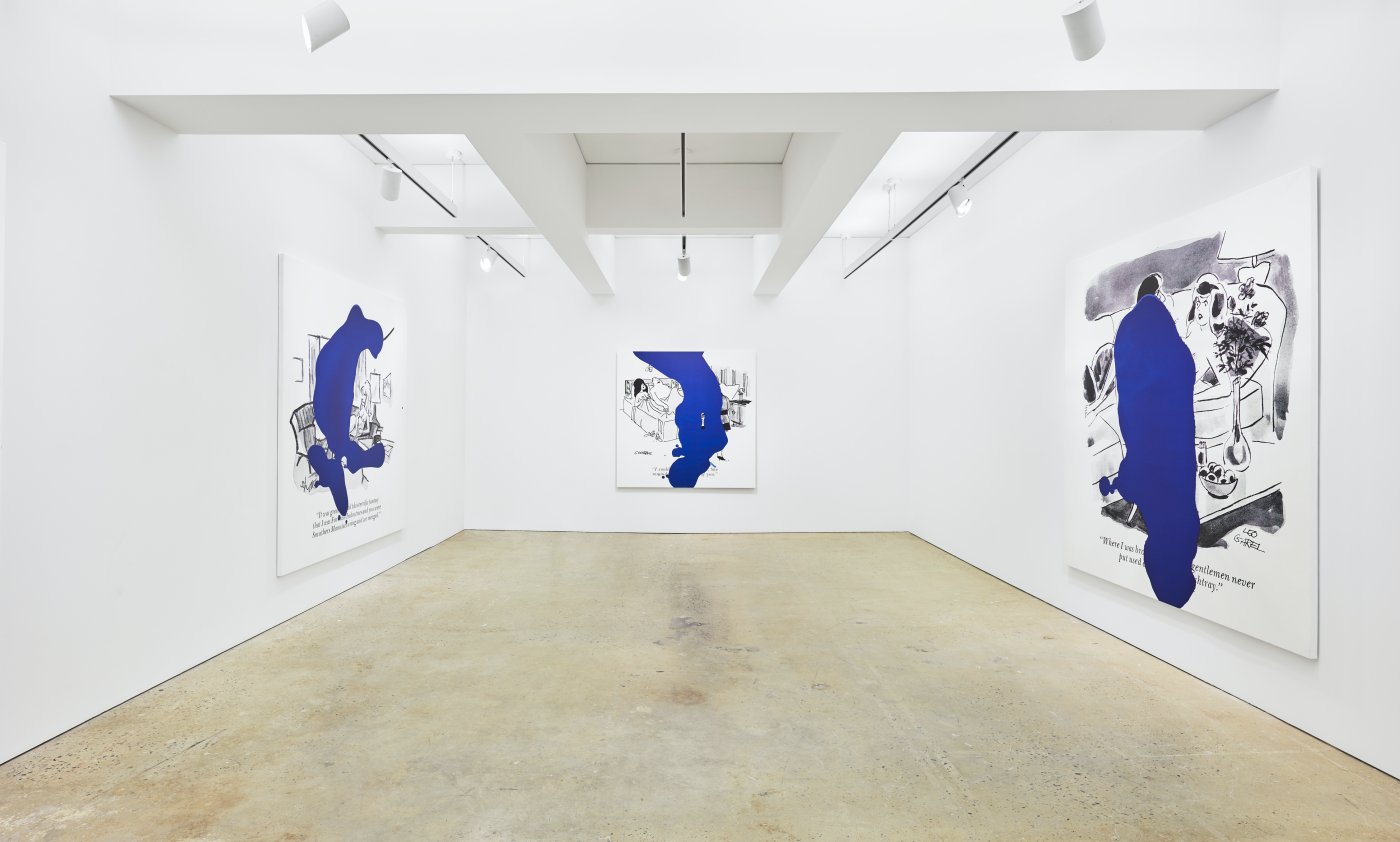 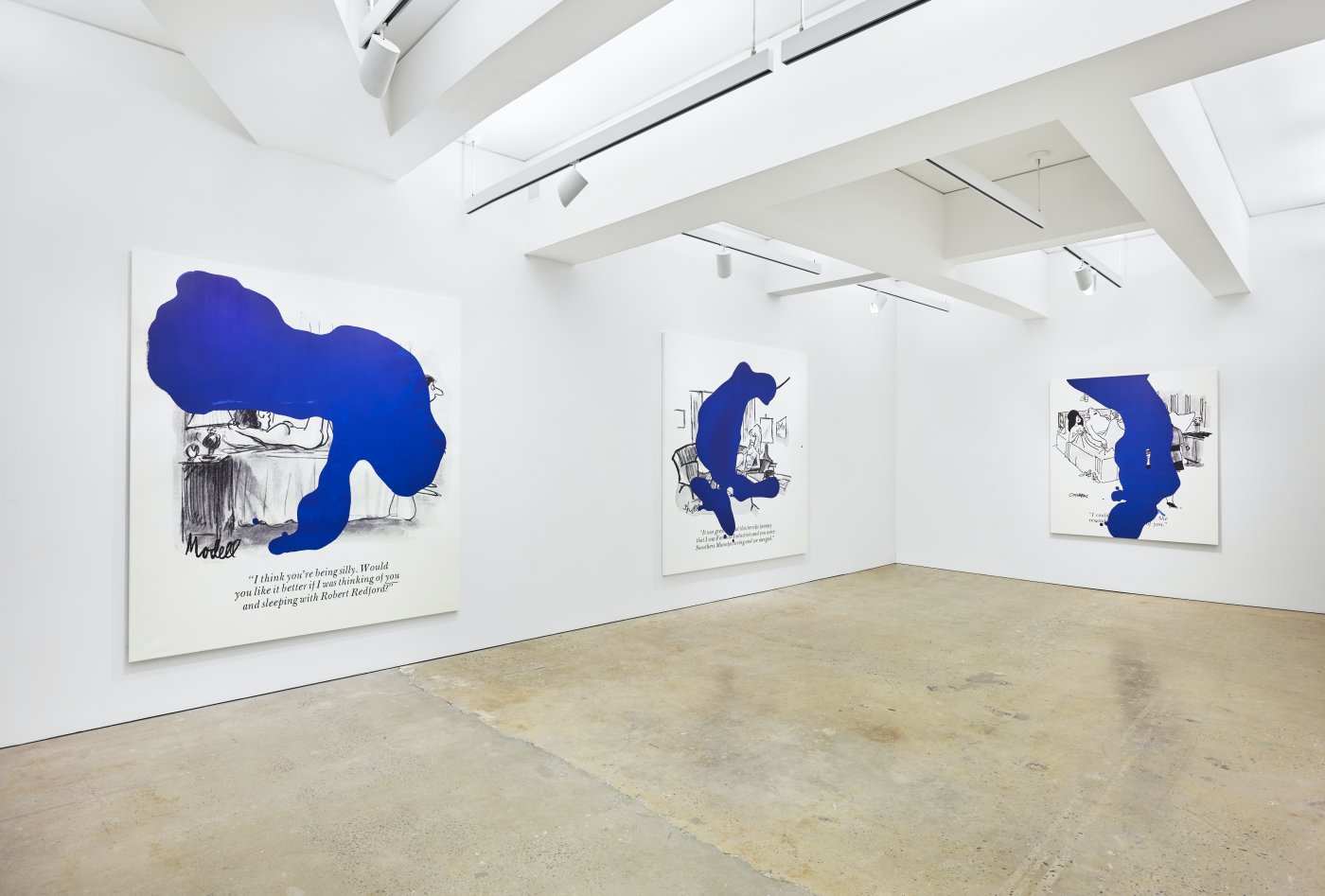 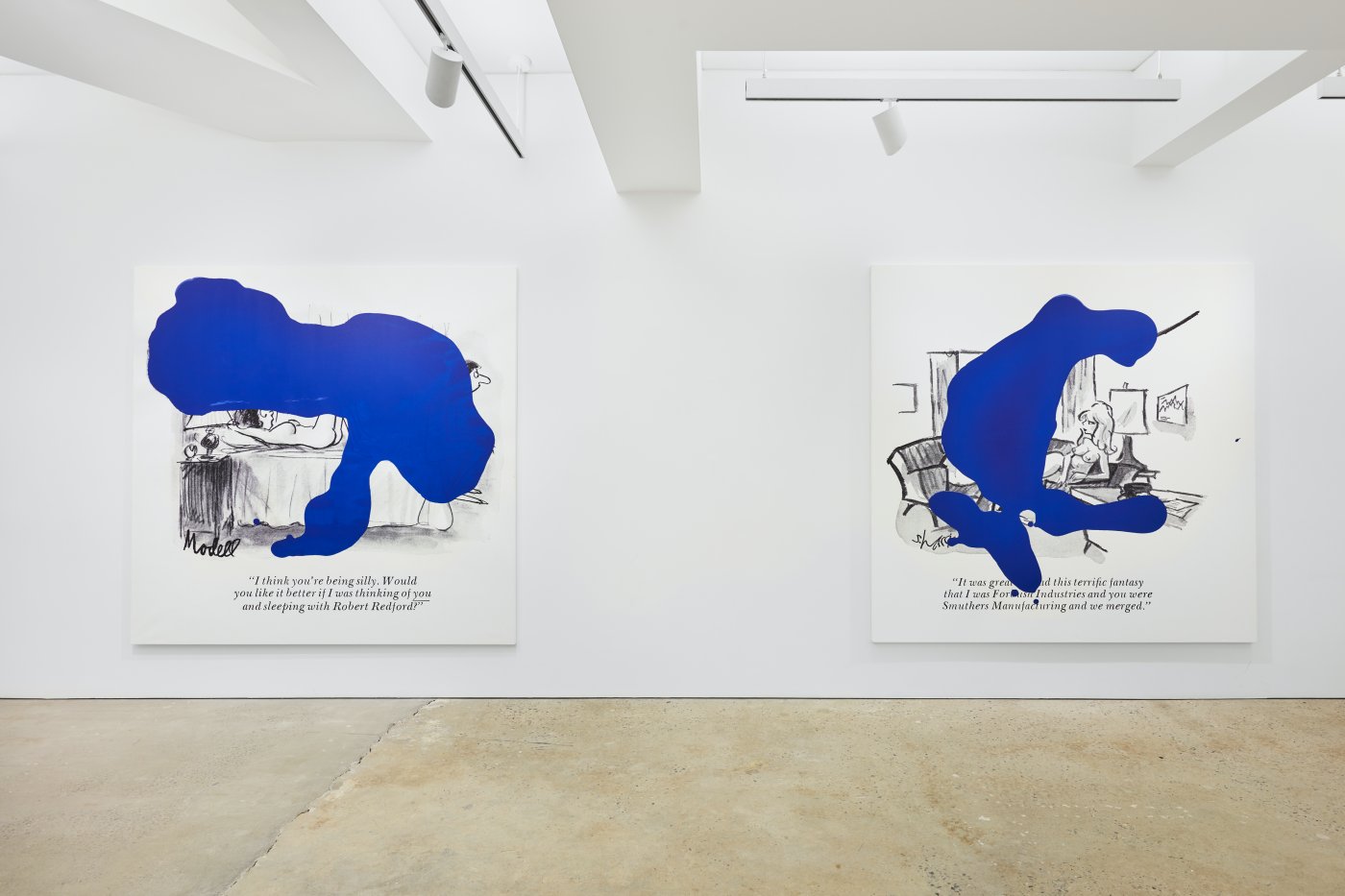 The presentation features an impressive selection of works created between 1988 and 1991 from this notably rare series that appropriate irreverent humor and mark Prince’s cunning foray into painting. The presentation also debuts five recent paintings of cartoon jokes from the artist’s body of work, Blue Ripples, created between 2017 and 2019.

Throughout his career, Prince has mined popular culture to address American societal conventions while boldly dismantling notions of authorship. Having previously dedicated his practice to photographic appropriations of media and advertisements, the artist turned his attention to cartoons in 1984 with a series of simple drawings copied verbatim from The New Yorker. Shortly thereafter, he separated the found cartoons from their captions and paired them with unrelated punch lines to create novel, enigmatic narratives. Engaging the macabre nature of classic American and Borsch-Belt comedy, Prince refined his repertoire of culled material to a distinct selection of jokes and cartoons that addresses stereotypes, sexuality, infidelity and embarrassment.

Parlaying his notorious appropriative strategies into painting, Prince silk-screened the disjointed cartoons and jokes together onto monumental canvases beginning in 1988. At the focus of the exhibition are the paintings rendered in dynamic, monochromatic hues of orange, red, burgundy, or green, that highlight the artist’s innate mastery of color from the onset of his engagement with the medium. These works shocked and defied the expectations of the art world that was accustomed to his photographic legacy. Made during a period defined by a revival of expressionistic, gestural painting, the series marks Prince’s singular approach to the medium by way of bleak, witty cartoons and one-liners that denounce the grandiose, dramatically painterly style that dominated the New York art scene.

Created almost 30 years later, five paintings from Prince’s Blue Ripples series are presented for the first time. While these recent large-scale canvases appropriate satirical cartoons similar to the Cartoon Jokes, the salacious illustrations are partially obscured by large, amorphous swathes of blue pigment. Recalling the unfettered legacy of abstract expressionists, the organically shaped pools of paint were poured over pages torn from Playboy magazines published between 1960 and 1980. The resulting painterly works on paper were then methodically scanned, enlarged, and printed on canvas, eschewing the original act of creation and building on the artist’s legendary defiance of the conventional medium.

The exhibition will be accompanied by a comprehensive catalogue produced in collaboration with the artist and featuring scholarly texts and archival materials.

Richard Prince (b. 1949, Panama Canal Zone; lives upstate New York) is renowned for his process of repurposing, combining and recontextualizing appropriated imagery and text. Since the 1970s, he has employed drawing, re-photography, and painting to create bodies of work that parody and critique American culture. The artist has been the subject of numerous solo exhibitions at prestigious institutions throughout the world, including the Kunsthalle, Zurich; San Francisco Museum of Modern Art, California; Serpentine Gallery, London; Solomon R. Guggenheim Museum, New York; Walker Art Center, Minneapolis; and Whitney Museum of American Art, New York. His work belongs to many notable public collections, such as the Metropolitan Museum of Art, New York; Modern Art Museum of Fort Worth, Texas; Museum of Fine Arts, Boston; Museum of Modern Art, New York; and the Victoria and Albert Museum, London.