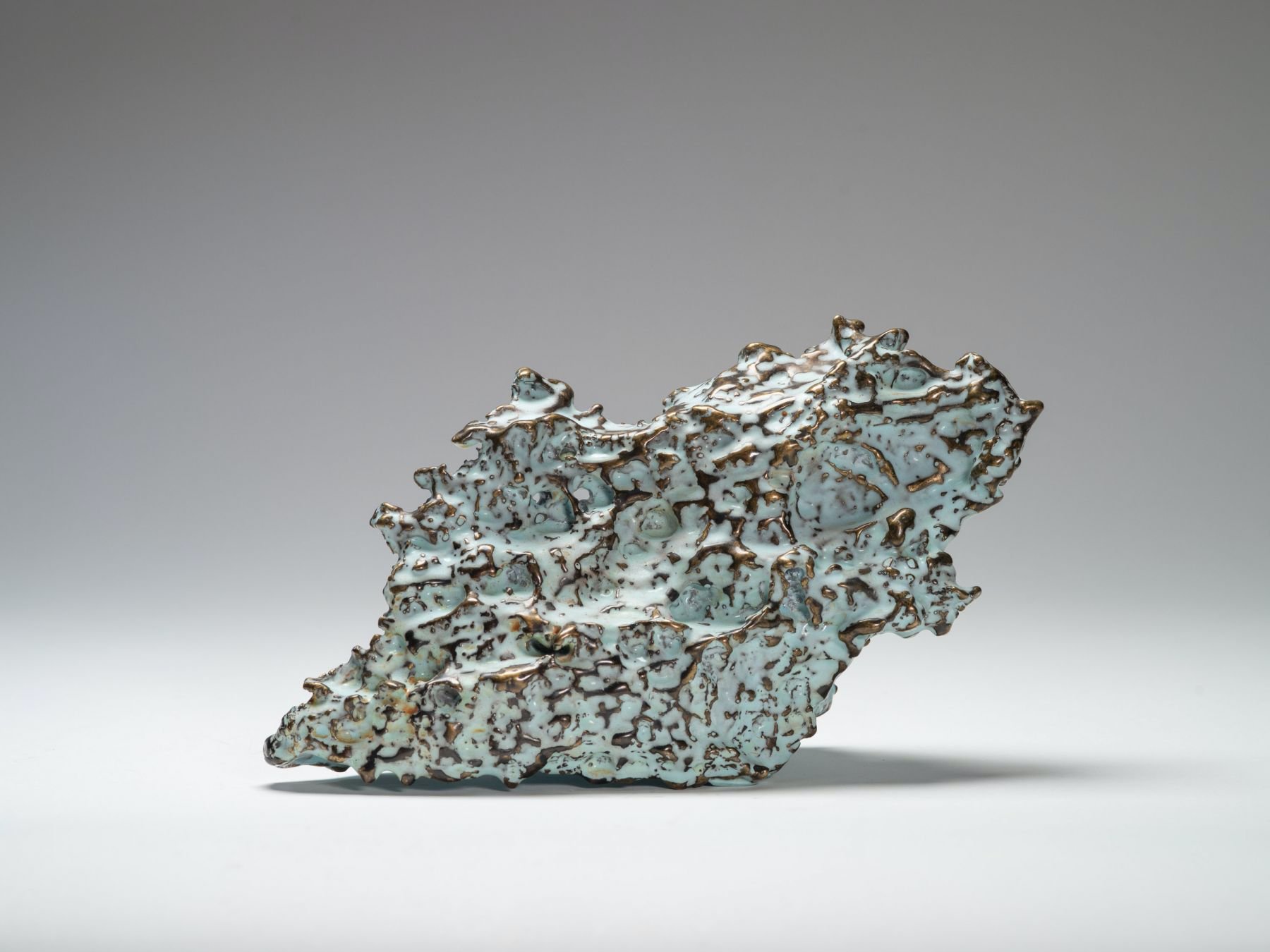 Marking his first solo show at Leila Heller, Fishman’s exhibition consists of a series of 70 small and medium-sized sculptures. The series builds upon his previous exhibition “What Remains,” exploring themes of struggle, survival, life, and death. But whereas his last show was expressed through blackness, Break, Blow, Burn marks Fishman’s return to color in a new and unexpected way. The colored works are built on a core of bronze or styrene and explore different avenues attempting to give shape to color, embedding the color in the sculpture rather than using it simply as a surface coating. The use of color in this way pushes the mutability of the form so that it appears to be in constant motion, almost filmic, flowing. This way of engaging with color as sculpture carries forward several art historical strands that have skirted this issue but not resolved it. The leap that Fishman is taking is based on his observations of the natural world- lava flows, meteorites, coral growth- where color is intrinsic to and inseparable from the observed form.

Much of Fishman’s motivation for this exhibition came from his own curiosity of the unknown. During the height of the pandemic lockdown, the artist began experimenting with unusual, natural, household-materials. The whole of Fishman’s practice is connected to the natural world and the aspects that engage him in nature are precisely what he delves deeper into. The goal is ultimately revealing that which he had not known or seen before. His experimentation during lockdown was the first part of his process. He would take natural objects and test the limit of the material- how far could it be bent before it snaps? How could he make something heavy appear light? How would one material react versus another? This process was not merely a means to an end, but rather a way of revealing previously unknown truths. A way to discover buried secrets in his mind and buried secrets in nature.

After settling on a sculptural form, Fishman scans the natural material and produces it on a larger scale through 3D printing. By enlarging the form and changing the material, Fishman reveals a new set of undiscovered truths only seen by this new perspective. Whether the work is made in bronze or polystyrene, whether it be painted, pigmented, or dyed, each sculpture reveals Fishman’s engagement with the process of play and experimentation.

The title of the exhibition, “Break, Blow, Burn,” comes from a poem by British metaphysical poet John Donne (1572.1631), titled “Break, Blow, Burn, and Make Me New.” And making new is precisely what Fishman aims to do. “I am trying to reimagine myself, reimagine my work, and that is what keeps me fresh,” says Fishman. “I think change and reinvention is the essence of a rich life.”

Drawing from sources across the natural world, and driven by relentless curiosity, Richard Fishman’s sculptural practice spans more than fifty years. Fishman’s creations are both engaging and beautiful. They draw you in with their allusions to the familiar in nature and beguile using opposing tensions within each piece. The complexity of the surface and its counterpoint opacity and transparency all allow him to uncover mysteries and then recover them with mysteries of his own.

Fishman has an enduring interest in combining a considered artistic approach with the operation of random incidents to generate new forms. As a result his finished work seems to be in a constant state of flux. Fishman continues to embrace his lifelong exploration of the complexities of nature. To realize the consequences of this new branch of his thinking he is creating objects that are a new way of looking at his source material: nature through a new prism.