In the exhibition Richard Allen Morris «Multiple Identities» Häusler Contemporary presents the «Guns» series from 1965. An exclusive assortment of works on paper and canvas showcases this American artist’s painterly originality and subversive touch, which are admired by his fellow artists but are largely undiscovered by the general public. 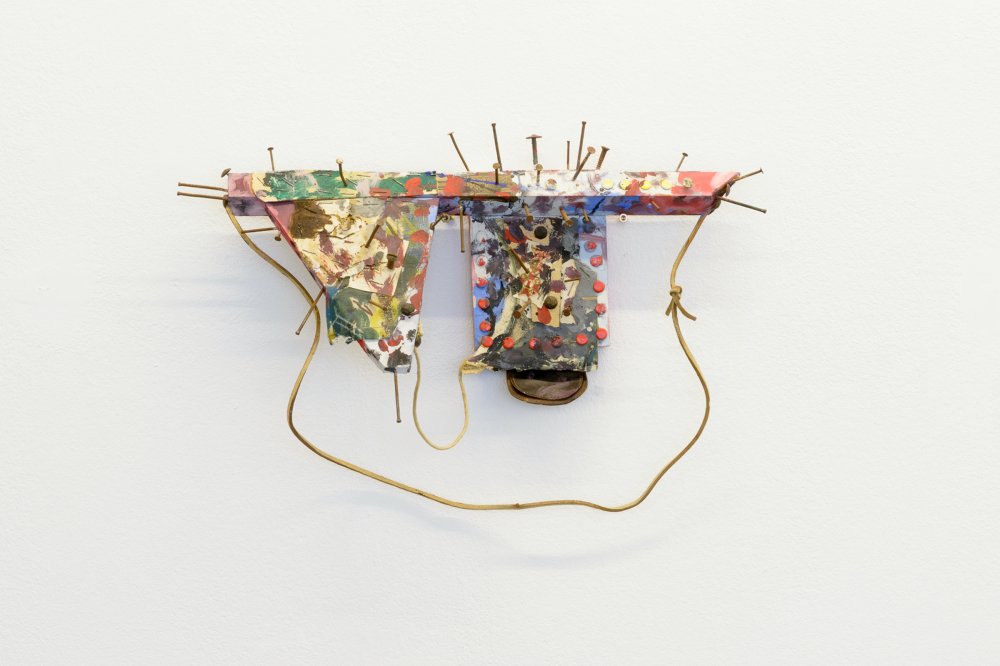 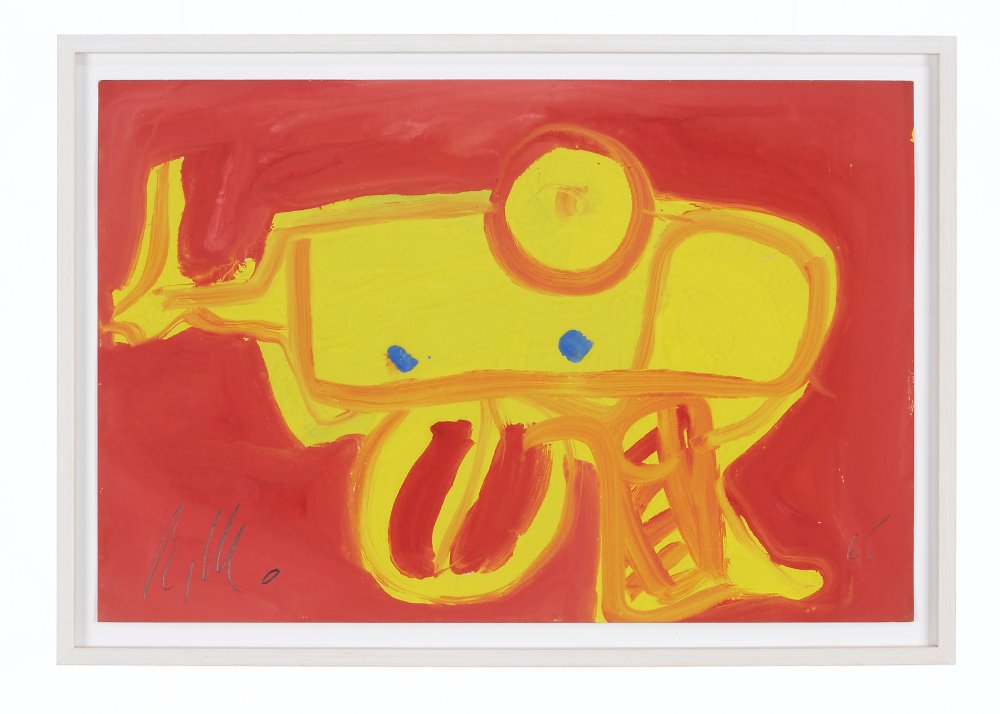 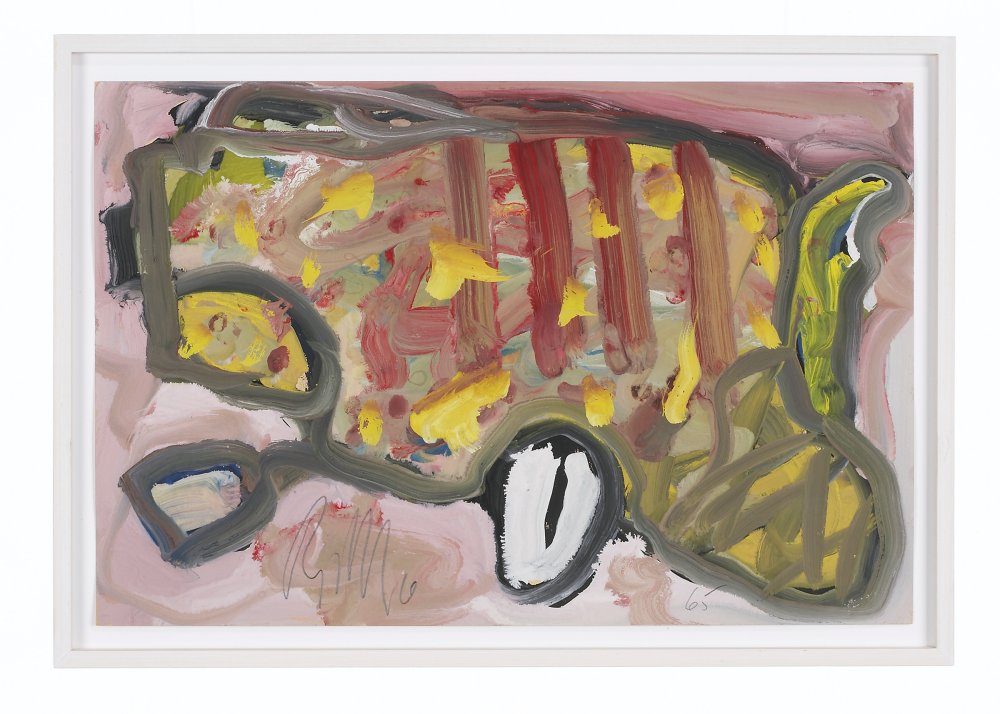 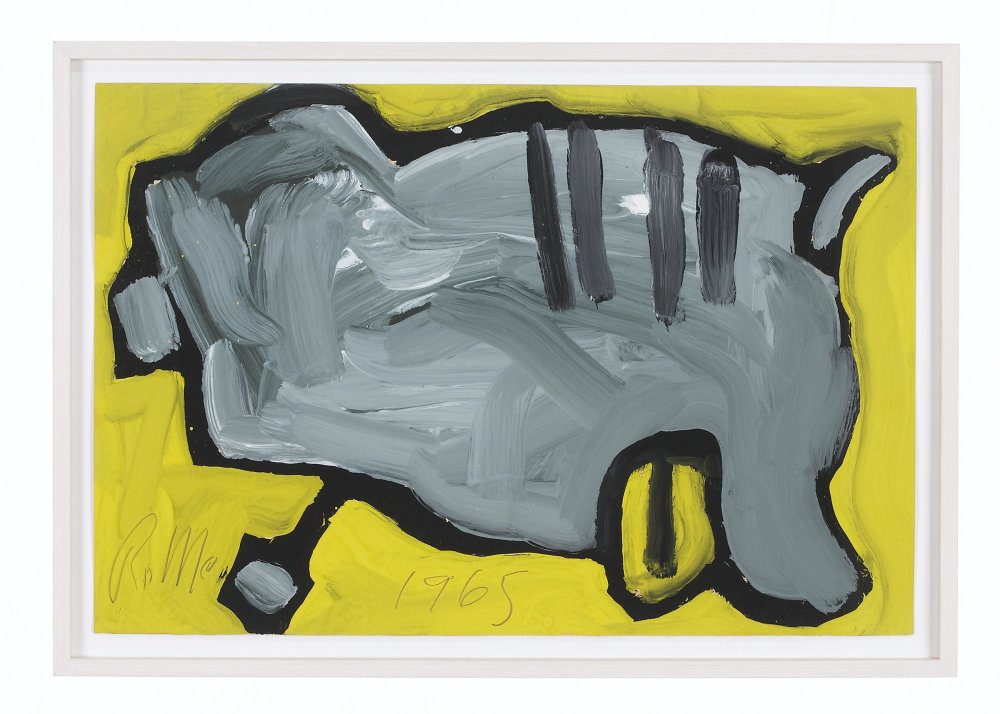 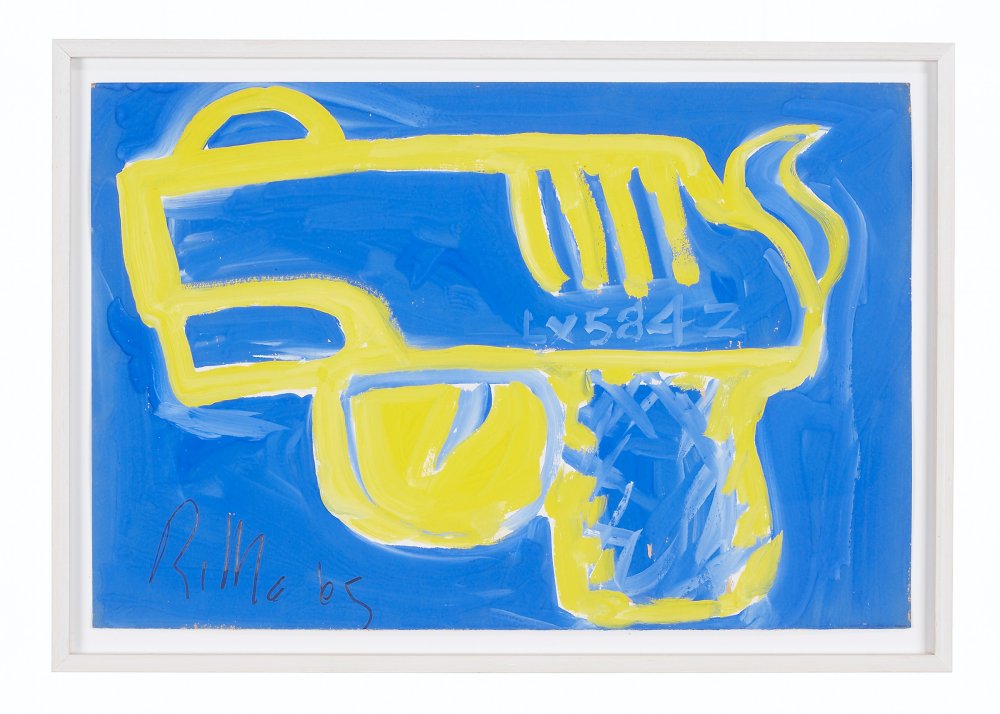 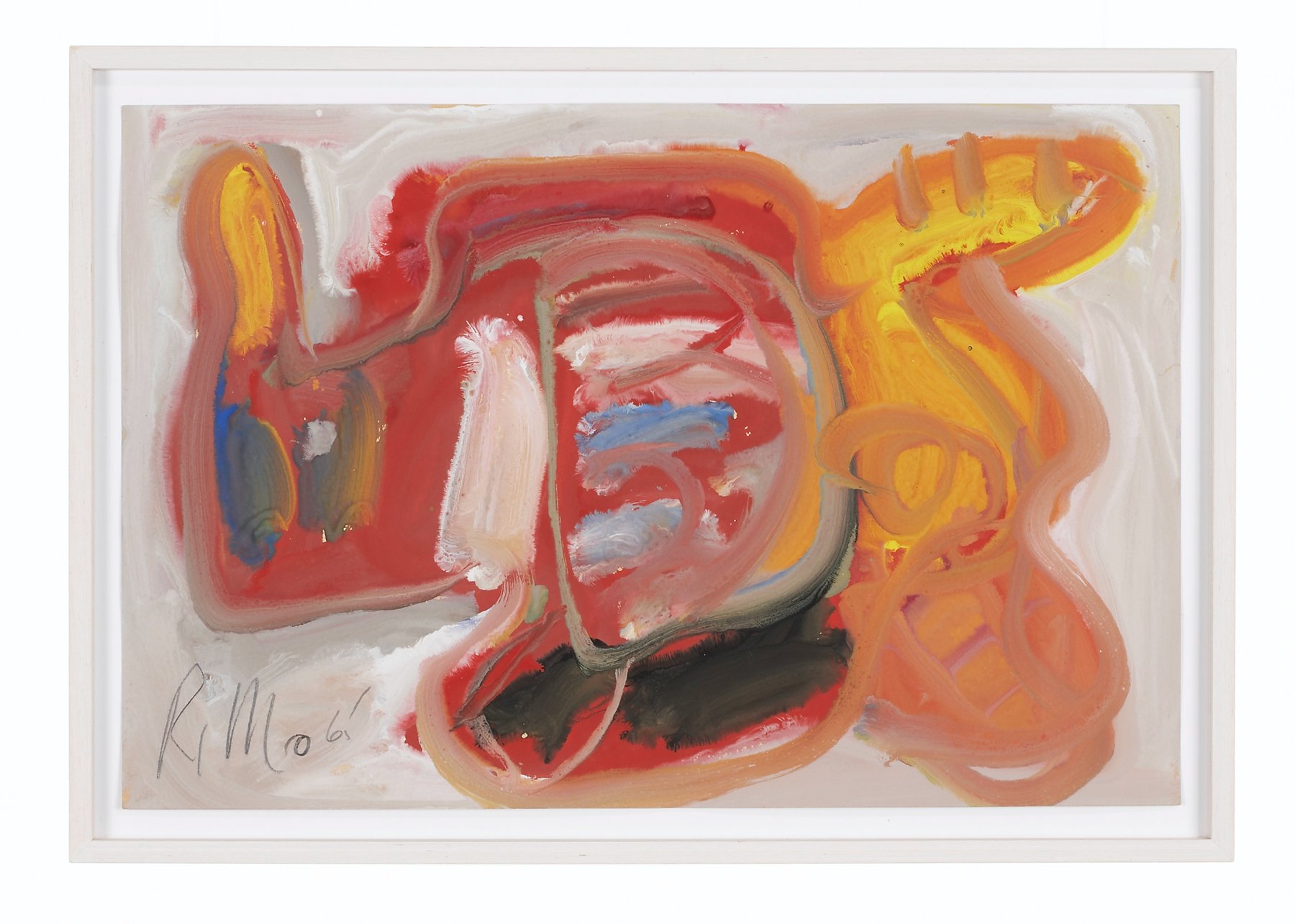 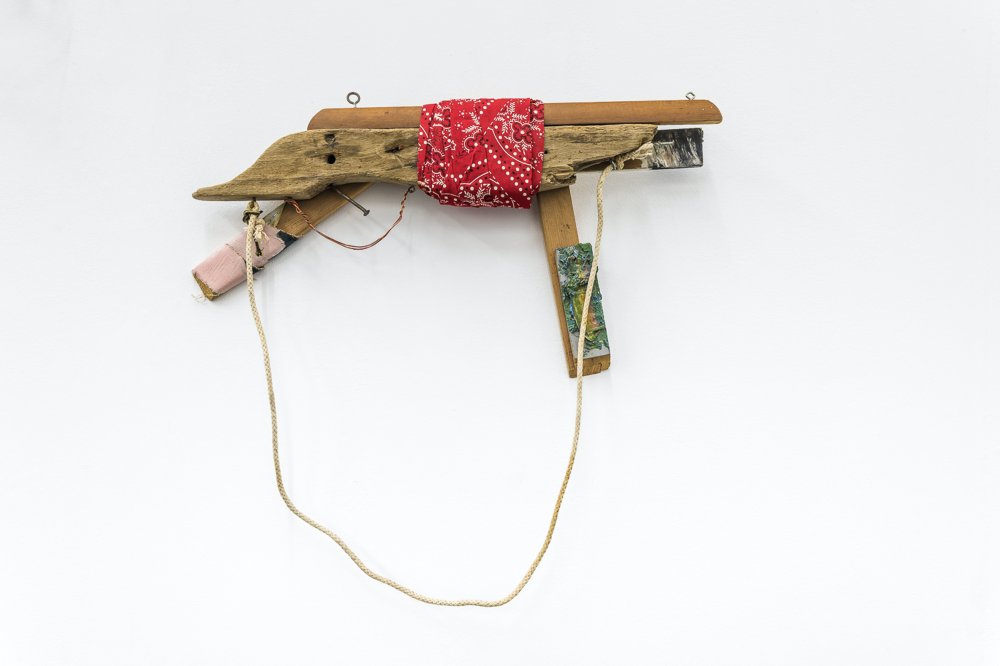 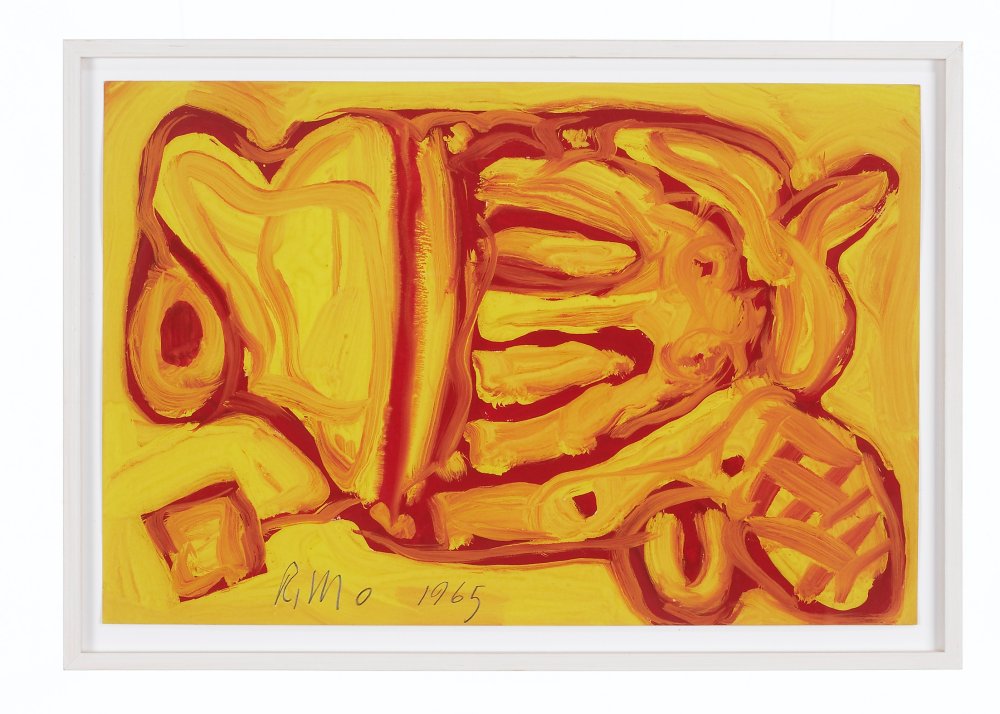 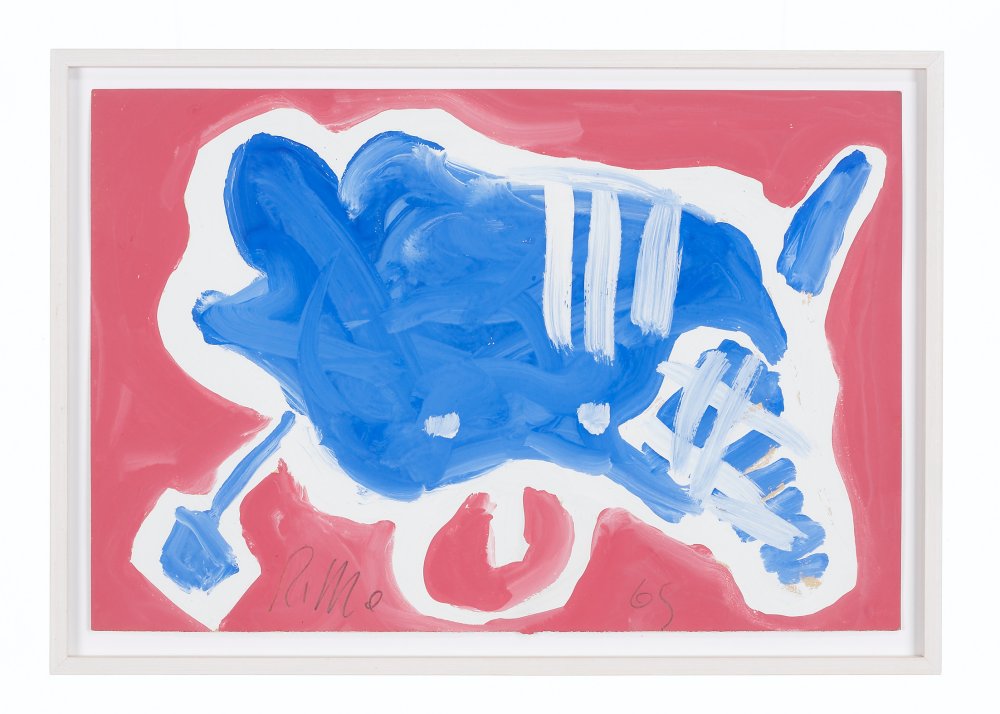 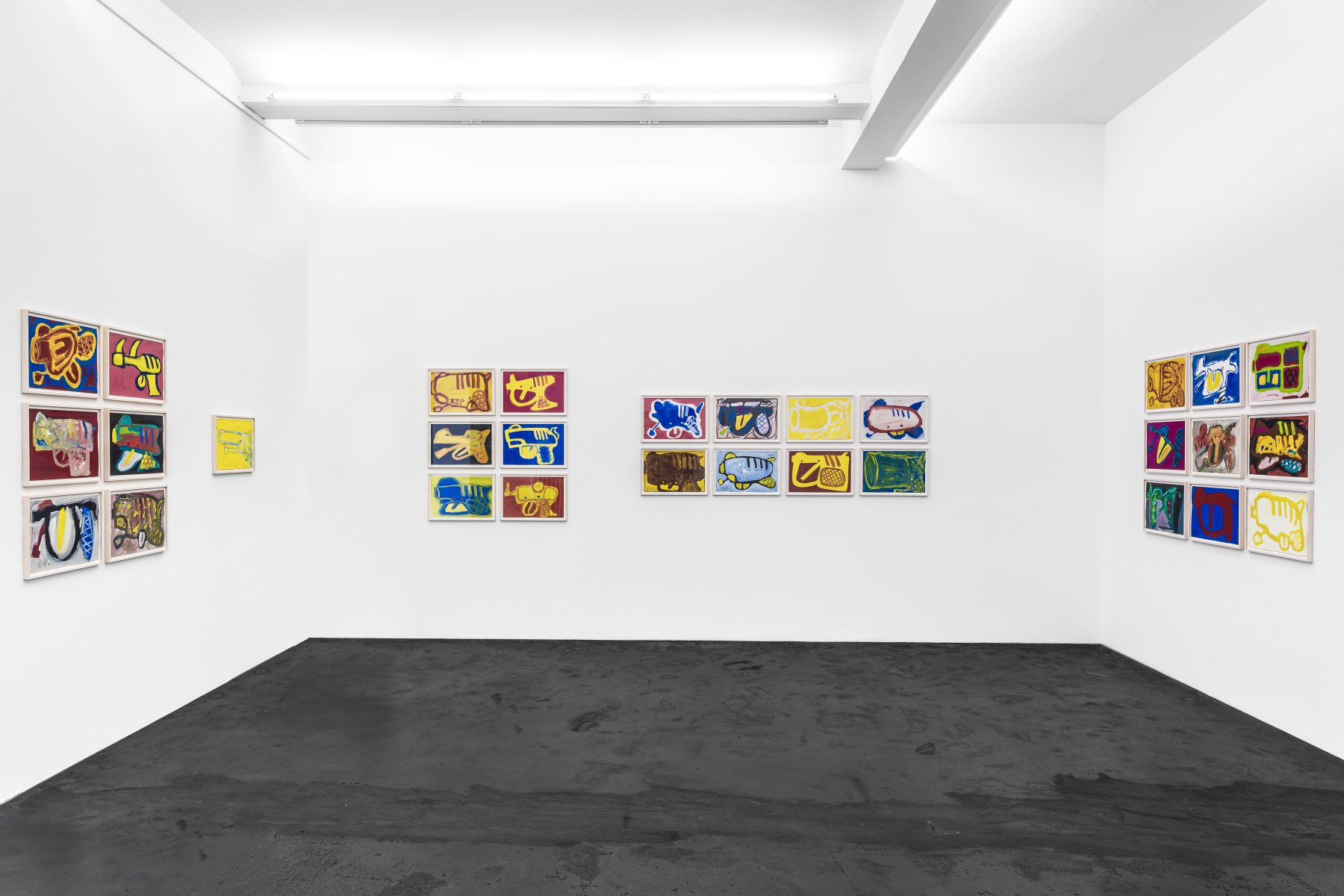 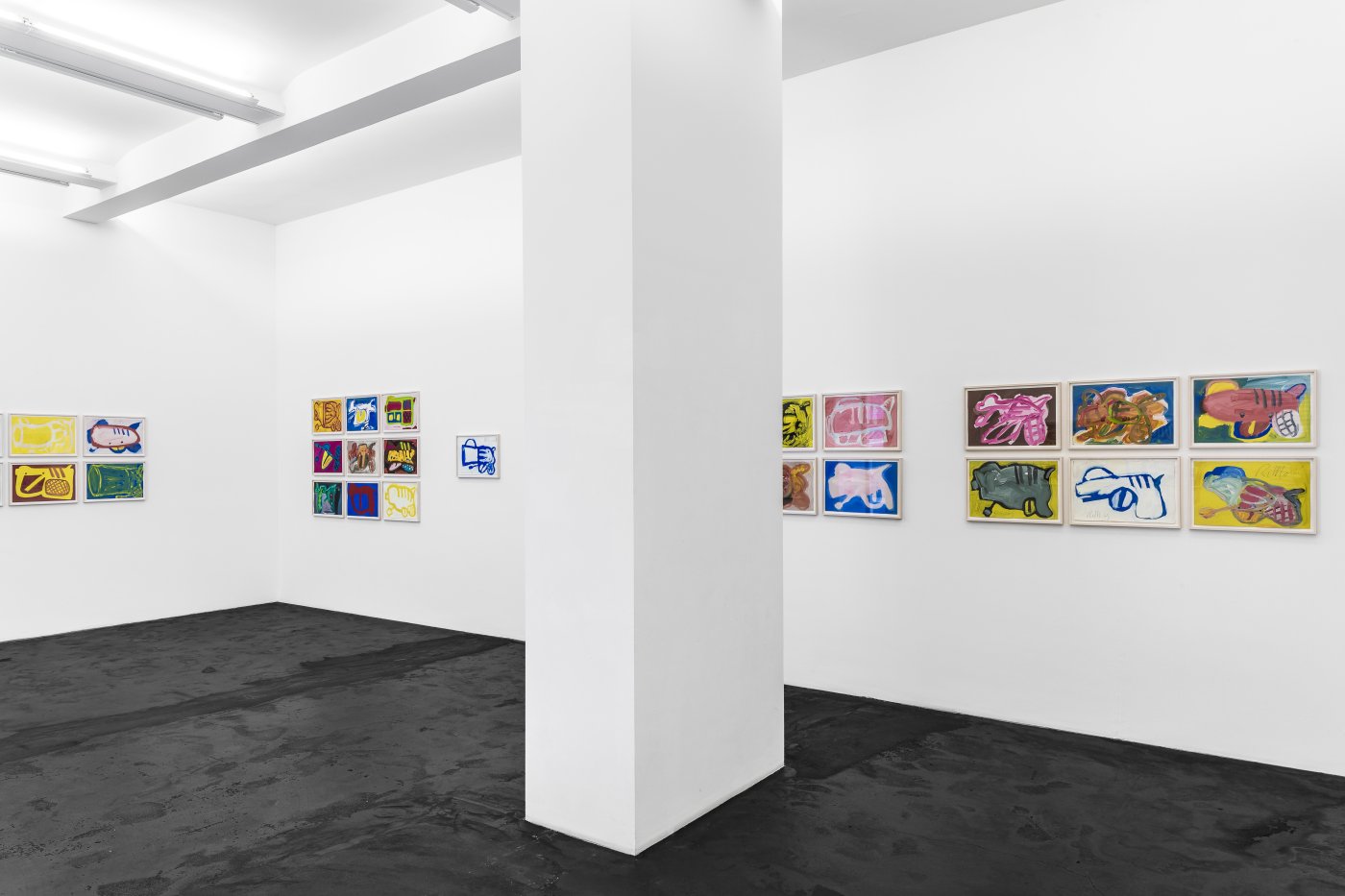 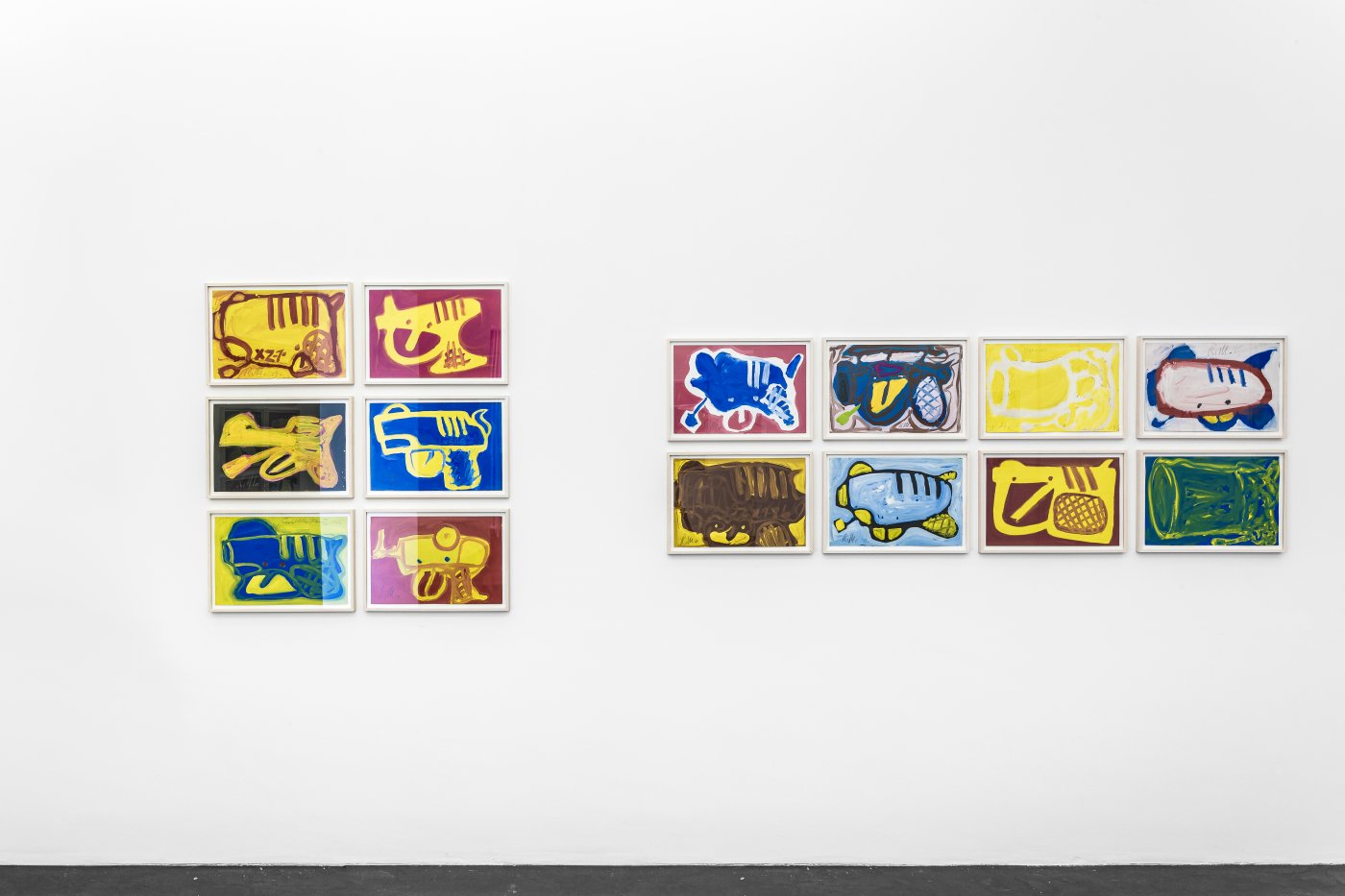 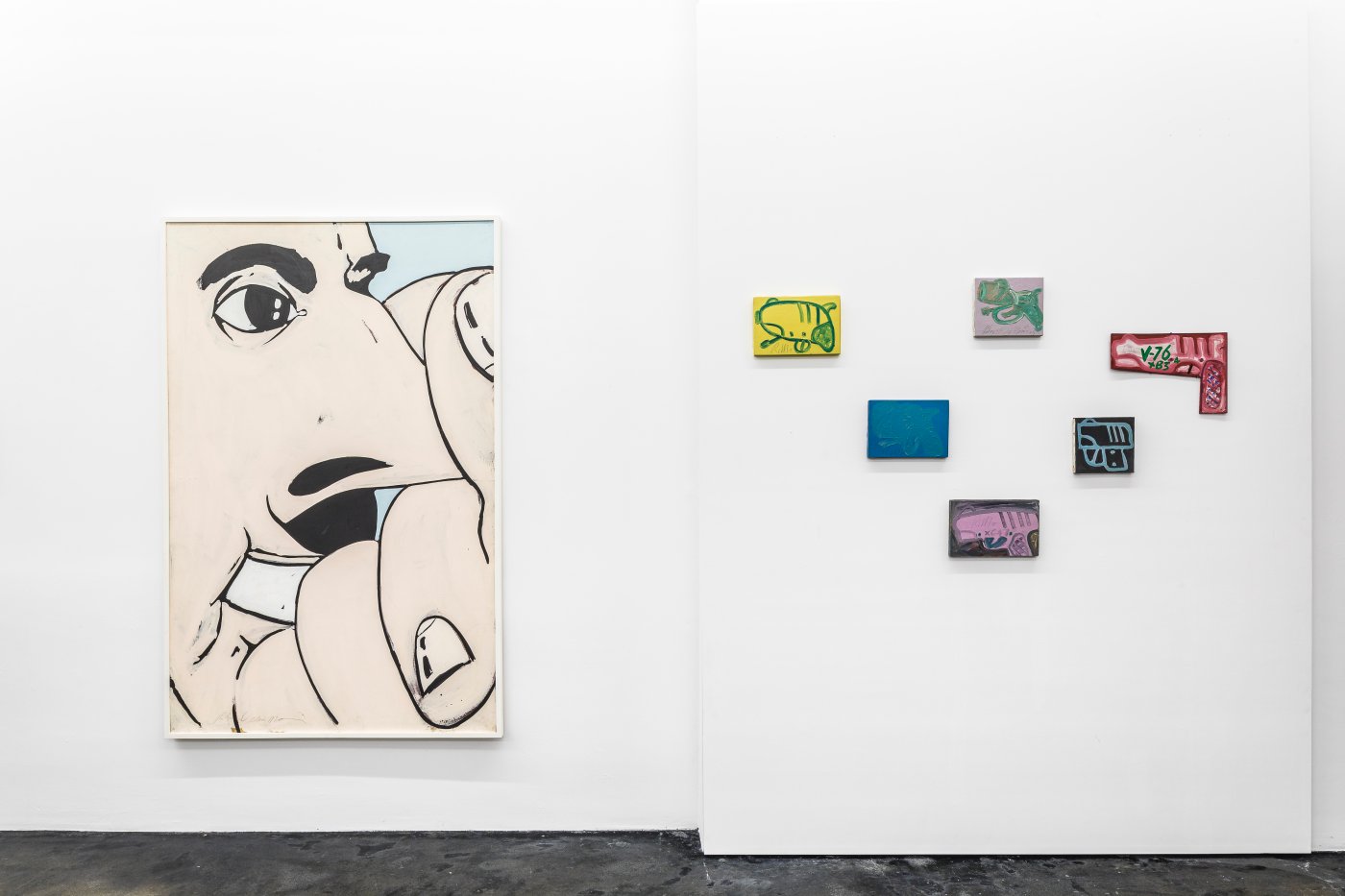 Since the 1960s, Richard Allen Morris (*1933) has explored various media in painting, pushing the image to the threshold of object and relief and alternating wittily and ironically between figuration and abstraction. Described as a painter’s painter, Morris has worked in obscurity for decades. Only a few contemporaries have been afforded a glimpse of the artist’s oeuvre, which helps to explain why renown has come so late in his career.
«The usual suspects» are how Richard Allen Morris refers to the motifs that emerged in his many years of artistic exploration of the theme of «Guns». Following extensive serial works on paper, which are the focus of our exhibition, Morris addressed this theme repeatedly from the mid-1960s to the 1980s; in addition to paintings on canvas, he created surreal-looking objects, often as collages made from colour-stained wood and other found materials.

In our «Multiple Identities» exhibition, we present an exclusive selection from the artist’s series on paper and works on canvas. Created from 1965 onwards, they share a close temporal and thematic connection to works by Pop Artists such as Claes Oldenburg, Jim Dine and Andy Warhol. Unlike these members of the New York art scene, however, Morris experiments with a sensually charged style of painting that remains committed to Abstract Expressionism.

In his obsessive devotion to a subject, his self-assured touch and his delight in painterly experimentation, he dynamically advances the creative process, drawing, as it were, new inspiration from each completed work. As his long-time friend and mentor David Reed wrote in the catalogue for the 2004 solo exhibition at Museum Haus Lange Krefeld, Morris’s speed of execution and the format of his paintings open up a realm that preserves the flexibility of his visual idiom.

Morris’s artistic roots lie in Abstract Expressionism. «There’s nobody as unique as Pollock, Kline and de Kooning. That’s my foundation,» says Morris. He later tried out different media in painting, and the subversive power of Pop Art and comics led him to the important series of works called «Heads». His subtle humour is legendary; the «Guns», too, seem steeped in irony, but the expressive distortion of external form can also be read as a blatantly critical allusion to this icon of American identity.

As a «painter’s painter», Morris has been and still is considered an insider’s tip; his affiliation with David Reed and John Baldessari eventually paved the way to widespread exposure in Europe as well, where the first museum exhibition of Morris’s works was held in 2004.

With Richard Allen Morris «Multiple Identities», we are pleased to provide another opportunity to encounter works by this extraordinary artistic figure.

Richard Allen Morris
Richard Allen Morris was born in Long Beach, California (US) in 1933. He lives and works in San Diego, California (US). After serving in the US Navy, he moved to San Diego intending to study art, but left college after only a few days. His broad education in art history was acquired through self-study of pertinent literature and interactions with friends who were artists. Music, literature and poetry are essential sources of inspiration for his pictorial work, which was long undiscovered by the public but which gained wide recognition in artistic circles early on.
In addition to solo and group exhibitions in the United States, such as at the Cue Art Foundation in New York (US) in 2004, at the California Center for the Arts Museum in Escondido (US) in 2009 and at the Oceanside Museum of Art in California (US) in 2015, the artist has also had exhibitions in Europe, including at Häusler Contemporary in Zurich (CH) and Munich (DE), at the Daros Collection (CH) in 2008 and at the MMK Museum für Moderne Kunst Frankfurt am Main (DE) in 2006. The Museum Haus Lange in Krefeld (DE) and the Museum of Contemporary Art San Diego (US) dedicated an extensive retrospective to him, accompanied by a catalogue, in 2004 and 2005, respectively.