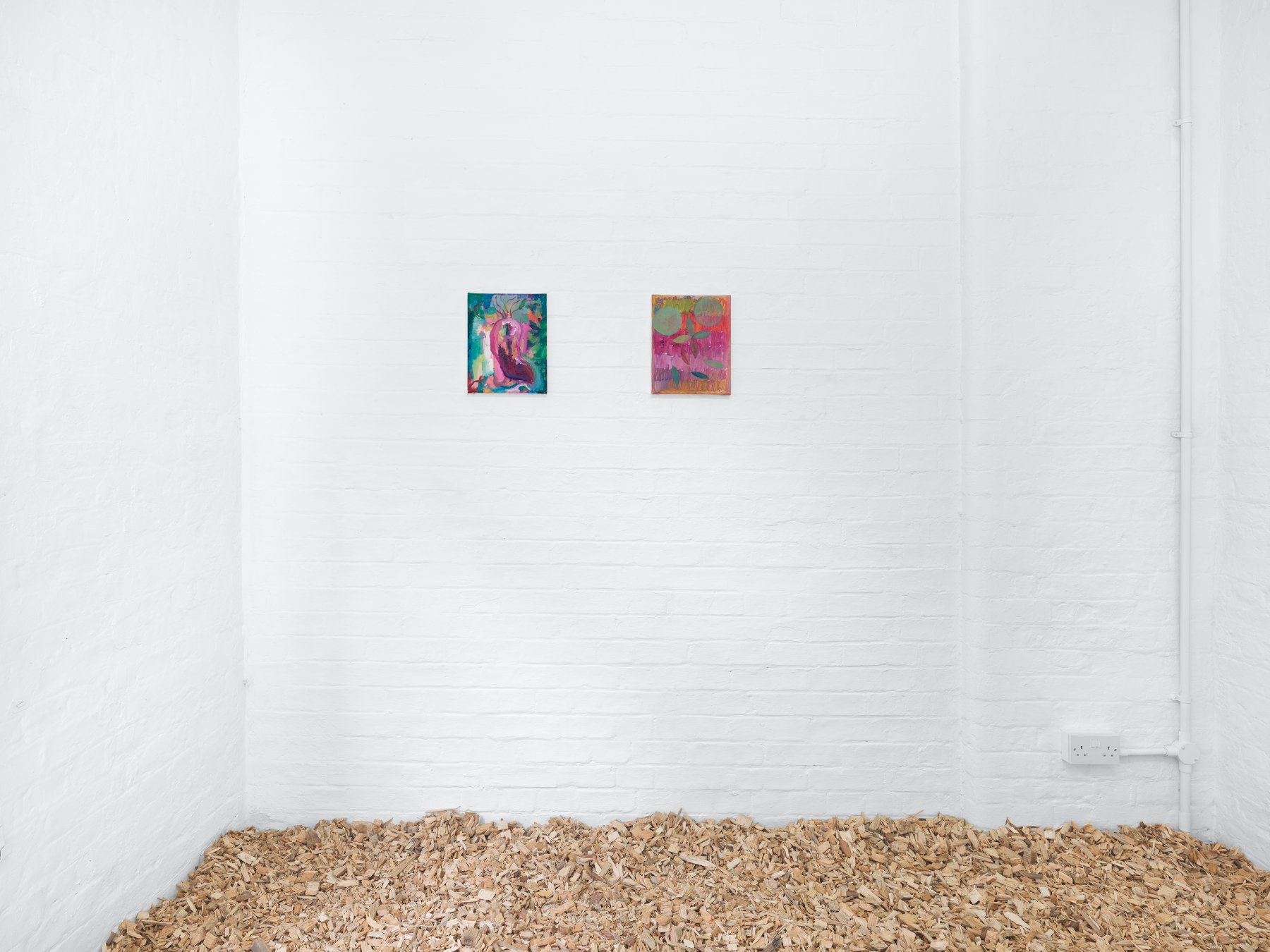 The works on view are a continuation from paintings produced as part of hyperbolisch ratlos ortlos inhaltslos (2015–21), Pulfer’s large-scale and site-specific commission for Liverpool Biennial 2021. While Pulfer’s practice includes installation, sculpture, music, performance, and textile, edrerde presents a set of new paintings which incorporate meditations on geometry along with abstractions of vegetal and botanical life informed by his immediate surroundings of Uckermark, Germany. Previous works of Pulfer’s include found, natural dyes gathered from his garden to create diverse pigmentation, here Pulfer uses oil paint exclusively. Inducing a slower process to realise a final composition, Pulfer’s use of oil occasions an intensification of memory’s relation to painting and its narrative potential, which Pulfer frequently tests through systems of mnemonic devices. The neologism of the exhibition’s title, for instance, hybridises the reversed and actual spelling of the German, erde, meaning earth. Enhancing the display as a terrestrial, multi-sensory environment, the exhibition features woodchip that thickly carpets the gallery floor. A material often used in permaculture gardening to encourage growth, retain soil humidity or suppress unwanted weeds, the woodchip functions here as a comforting yet literal unstable ground, compelling one’s reorientation while viewing.

Though discrete objects, these paintings cohere with the expanded mutability of Pulfer’s practice, which challenges the boundaries of linguistic signs and existent material, in their portrayal of capricious compositions made intelligible as studies of hyperbolic geometry. Informed by the meeting and extrapolation of different dimensions, hyperbolic geometry opposes Euclidian geometry, where surface becomes closed and curves in on itself — most evident in geometric readings of Earth. Rather, the hyperbolic plane is a surface in which space curves away from itself at every point. Open and infinite, this geometry manifests a kind of distorted, unstable map.

The hyperbolic plane is a surface where space can expand exponentially, and its manifestations can be found close at hand, such as in the structures of lettuces and kale. In this series of paintings, Pulfer loosens the fractal logic of hyperbolic geometry through visions of tangible nature, reading a cosmic magnitude within intimate and proximate material of the natural world. These relational compositions constitute an oscillatory network of meaning: kaleidoscopic pentagonal clusters evoke the structure of flowering mallows; cuboid grids visualise a staircase of atemporal dimensions; leaf patterns become disarticulated into fragmentary segments of compass lines.

In circumscribing encountered nature through polychromatic portraits of herbaceous flowering plants, vegetables, mulch and shrubbery, the work’s generative principle resides in its capacity to develop synaesthetic or associative affinities among organic cultures. Pulfer’s negotiation of geometry is both studious and poetic, relating to his own background as a self-taught artist, a practice that allows for exchange among hierarchies of knowledge whether studied, imagined, or felt. This methodology finds a pertinent resonance in the artists and amateur geometers referenced in Pulfer’s paintings, such as: George Phillips Odom, Marjorie Rice, M. C. Escher, Albert Dürer and astronomer Johannes Kepler. The polysemic content of edrerde articulates the connectivity between the natural and celestial, aptly expanded by the faculties of the mind. Accordant with Pulfer’s haptic, provisional and sensorial practice, edrerde is a nomadic and ecstatic exercise in generating interlaced equivalences of the natural world, both discernible and invisible.