Axel Vervoordt Gallery presents Proximi Mei Meum Fundamentum, a solo exhibition of work by Renato Nicolodi (°Brussels, 1980), on view in the Escher Gallery at Kanaal, Wijnegem. This is the artist’s third exhibition with the gallery, following Ibant Obscuri in Hong Kong (2018) and Omnium Memoria II in Antwerp (2016). 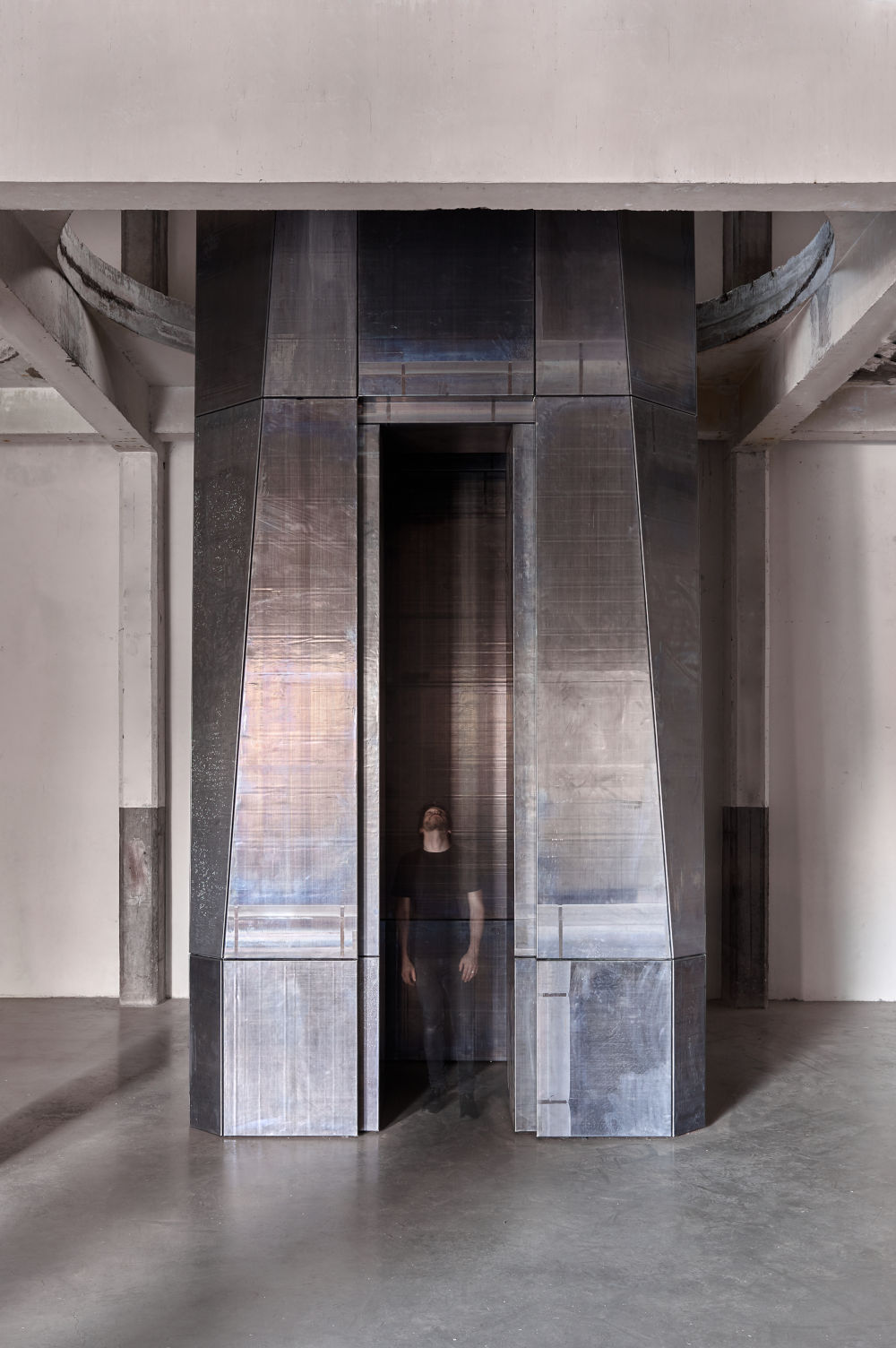 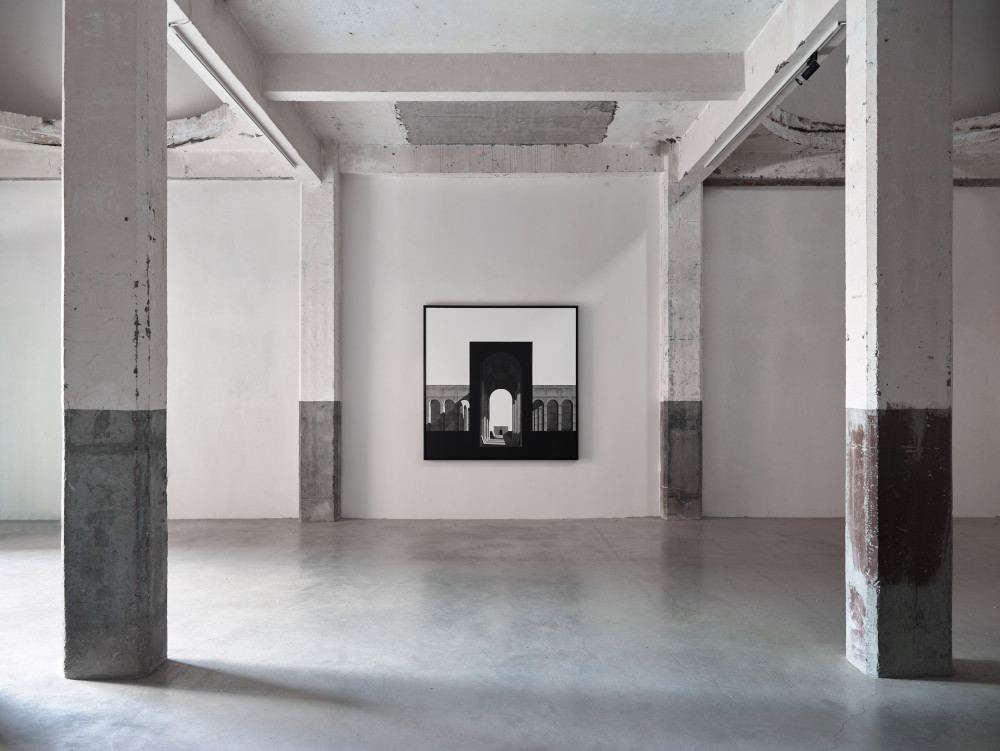 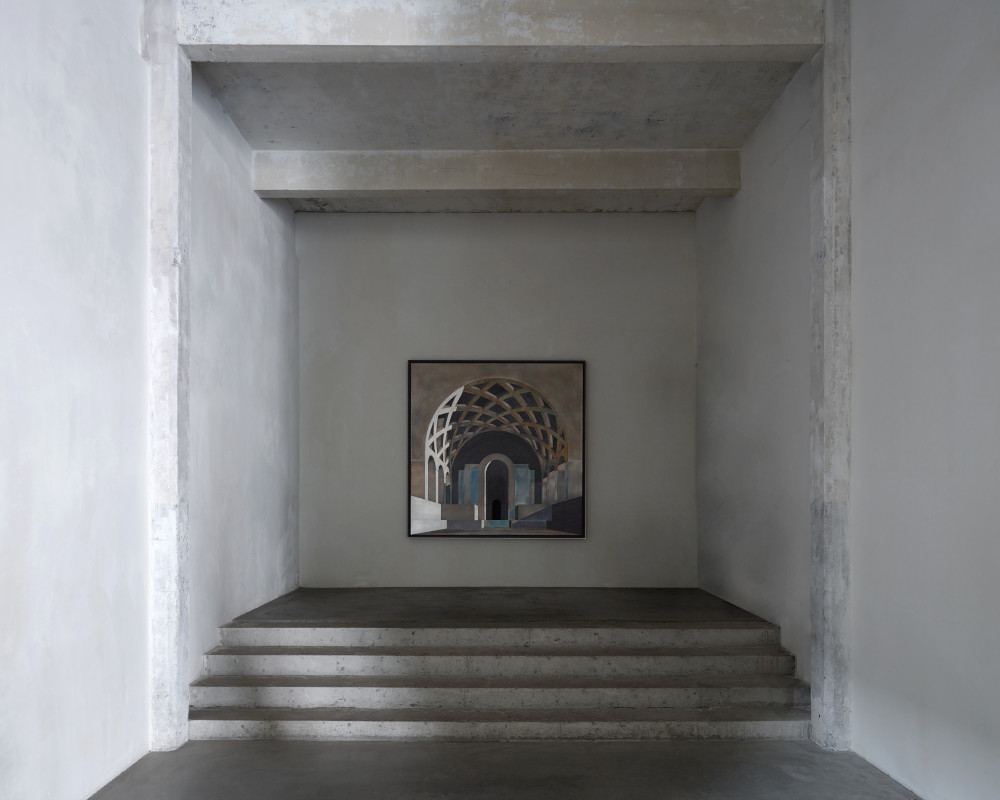 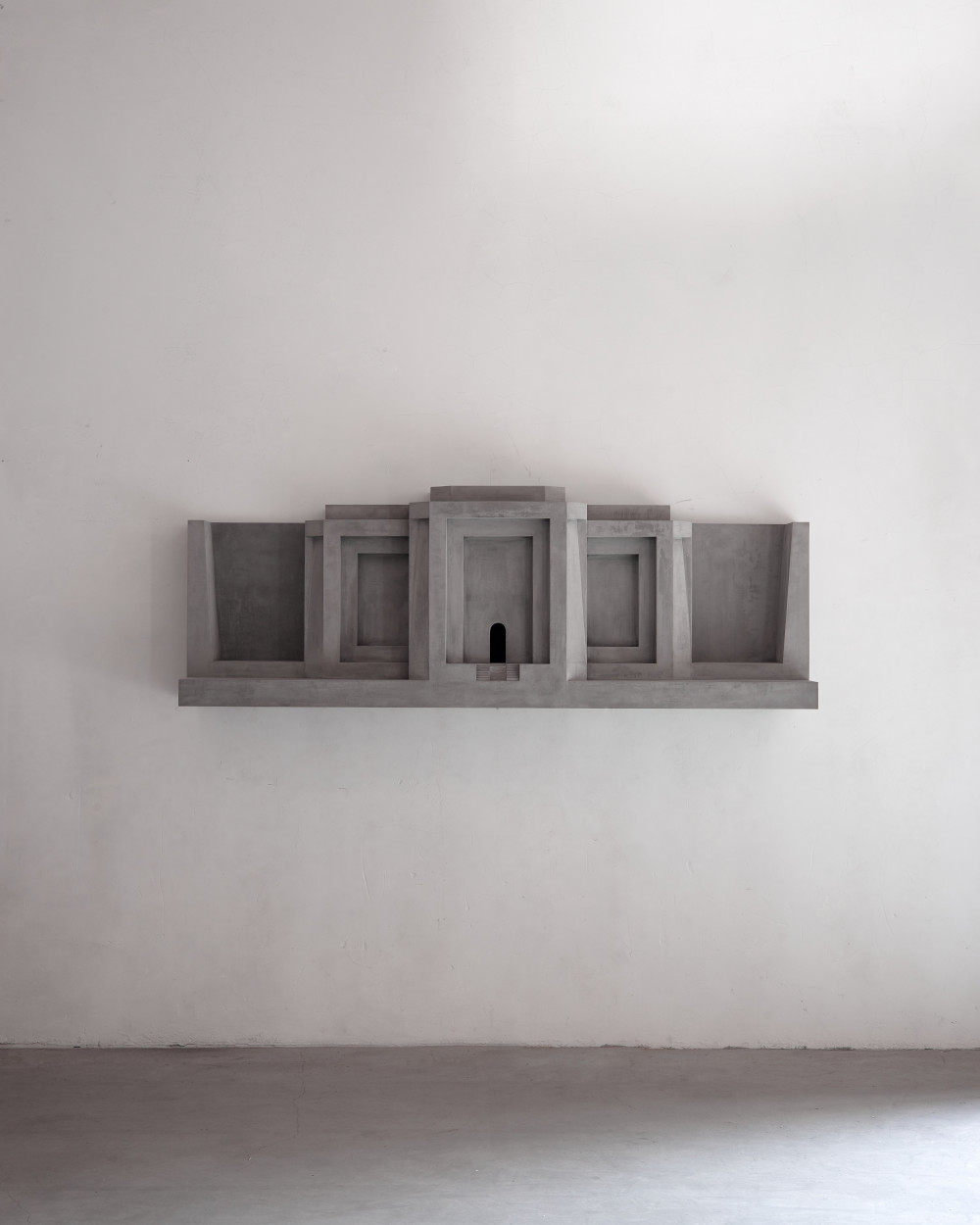 Nicolodi’s family history runs like a thread through the exhibition. His family and loved ones are the foundation and strength of both his art practice and quest in life: “Proximi Mei Meum Fundamentum”. Where his family background—the absence of his great-grandfather, his grandfather’s war and resistance history and the pocket diary description of his imprisonment… —is implicitly present in most of his oeuvre, the first floor of the exhibition shows some direct testimonials via photographs and a video projection with the same name as the exhibition. The photographs of family members on the altar-shaped table are tangible memories of a fragile part of his family history, fluctuating between recognisable memories and voids in his memory to be investigated and discovered.

The video work is a collection of Super 8 films shot by Nicolodi’s grandfather and father, recording the road for hours between Italy and Belgium. More than the physical path taken by different generations, the video shows what different generations have passed on to each other. As it is projected on a bluestone background, some parts remain cloudy—just like the family history. Nicolodi’s interest in capturing images and sound, as well as making ephemeral memories timeless, took over when began to record on cassettes the testimonies of his family members. The video material of his father and grandfather shows some striking similarities with Nicolodi’s work: the stereometric forms of which tunnels, viaducts, and intersections are made, exhibit the same rigid and centre-seeking structures as the artist’s creations. The personal table on the first floor shows such sculptures: Atlas, Transept, and Ibant Obscuri.

The title, Ibant Obscuri, is borrowed from Virgil, the ancient Roman poet, who wrote the sentence, “Ibant obscuri sola sub nocte per umbram” (“They went forth in the darkness down into the lonely night”), with a deliberate grammatical mistake to emphasise the darkness and solitude of the underworld. These literary references result in Nicolodi’s use of descending stairs leading to mysterious and enigmatic darkness. Fifteen centuries later, Virgil himself would play a role in Dante Alighieri’s La Divina Commedia—a great source of inspiration for Nicolodi. Dante described his own imaginary, fictitious journey through the three realms of the afterlife, including Hell, which could only be reached after descending a funnel-shaped pit. The seemingly endless voids that may at times be present in Nicolodi’s work can be a first step towards the viewer’s own mental journey, following Dante’s footsteps. It’s not possible to physically enter Nicolodi’s work: only by appealing to the imagination, the stairs can be descended. When looking at the sculptures, one is encouraged to revisit the notions of time and space. In this way, the experience of the work becomes something personal.

On the ground floor, by contrast, the viewer is given the opportunity to enter a work of art that was made in situ for this exhibition: Memento Mori III. Although it’s possible to step inside the work, the viewer is once again confronted with insignificance and humility; after all, more than entering the confined space is not possible; those who enter are trapped both physically and in their sensation. Nicolodi’s various sources of inspiration emerge from this work: the monochrome paintings by Russian constructivists, the power that radiated totalitarian architecture from the middle of the last century, the emptiness that depicts the missing and the untraceable, and the sudden monolithic appearance in Kubrick’s 2001: A Space Odyssey. Although the robustness of Nicolodi’s installations goes hand in hand with great personality and intimacy, the timeless archetypes—often referring to Latin types of architecture that span several centuries of architectural history—refer to a universal void and a search for an own but shared past.

The bas-relief sculpture Trias, located on the Escher Gallery’s ground floor embodies this idea. The title of the work can literally be translated as a threefold division or tripletion. While the number three in the religious (-architectural) world refers to the triple deities, sacred trinities or triads, fundamental theological, spiritual or philosophical ideologies are lacking in the artist’s work. Nevertheless, he departs from a certain Weltanschauung, through the use of architectural archetypes and titles referring to religious or funerary buildings, but without suggesting a concrete interpretation. This absence leaves a space or a platform which makes it possible to reflect, to sacralise, certain things serenely. The paintings on the gallery’s ground floor (acrylic on wooden panel) show similar spaces for contemplation and reflection.

Centuries of stories and histories of visual arts, architecture, and literature thus end in the possibility of thinking about what the past was, the present is, or the future could be like. With the stones on the corner of the table on the first floor, Nicolodi creates a continuum: the stones belong to his young children—a new generation. By incorporating the pebbles into the whole, memories of this new generation are added, by an abstract, yet real, object that only acquires a meaning after it has passed through the hands of the artist’s proximi. In the same way, the stones also form a suggestion of how the viewer can give meaning to universal voids or recognisable objects, in order to remember loved ones.