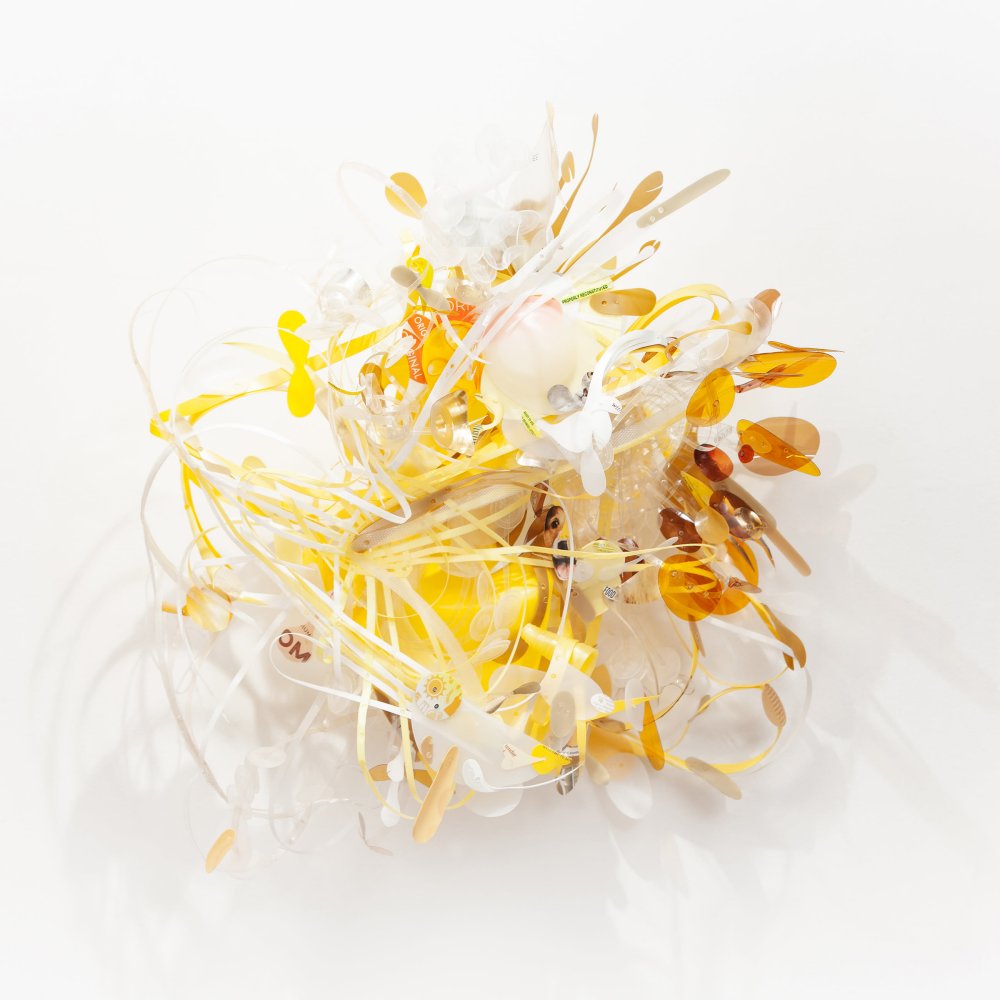 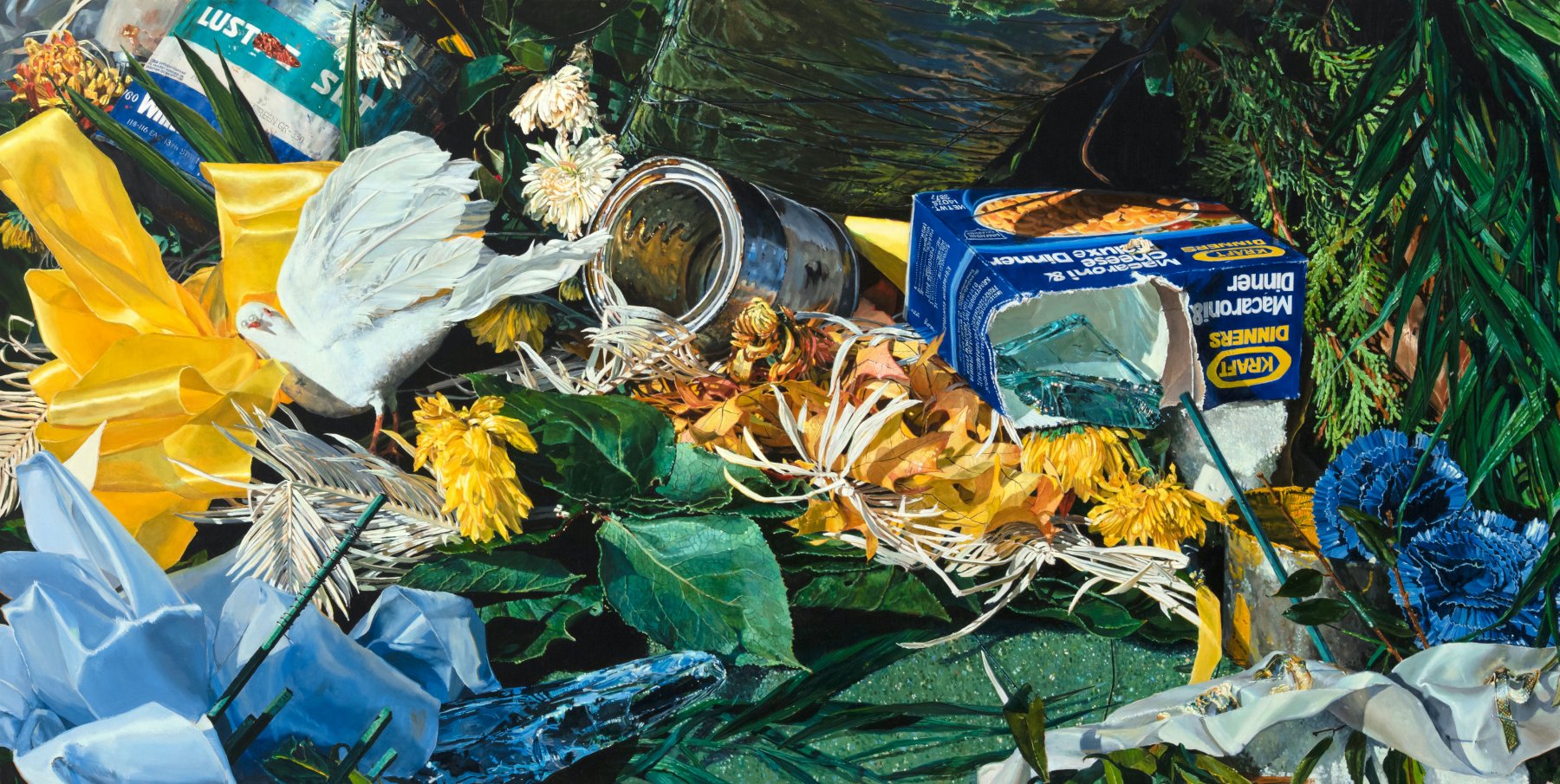 Remnant Romance creates a dialogue between the artists, who, despite working in different media and being part of distinct generations, both draw inspiration from trash and seek to find beauty in the remnants of other peoples’ lives.

Idelle Weber is perhaps most well known for her contribution to Pop Art and her famous silhouette paintings, in which she depicted anonymous figures doing quotidian activities against nondescript backgrounds. In the late 1960s, continuing to find inspiration in the everyday but shifting in style to photorealism, Weber turned her attention to overlooked common daily sights in New York City such as fruit stands and street litter. The artist’s photorealist paintings were a continuation of the consumerism reflected in her Pop Art works, and were exhibited more widely. Over the past decade, however, Weber’s Pop Art has received more attention, largely due to curator Sid Sach’s inclusion of her silhouette paintings in his Beyond the Surface and Seductive Subversion exhibitions in 2010. Remnant Romance provides the opportunity to revisit the important but recently less studied photorealist period of the artist’s oeuvre, featuring fourteen paintings and watercolors ranging from the 1970s to the 2000s.

In these works, Weber meticulously captures the colors, textures, and placement of litter lying on the street, approaching her decidedly commonplace subject matter as if it were a carefully staged still life. In East End Bufferin (1990), for example – which was shown in the 1991 “Six Takes on Photo- Realism” exhibition at the Whitney Museum of American Art alongside works by Richard Estes and Audrey Flack, among others – Weber focused on a dead bird nestled between an empty beer bottle and discarded wrappers, with bits of trash intermixing with wilted flowers and trampled grass on the side of a road.

Before being invited to participate in Hollis Taggart’s exhibition, Robson had only been familiar with Weber’s Pop Art and East End Bufferin. Deeply inspired by Weber’s photorealist works and the kinship she felt with the late artist and their shared desire to focus on the residual, Robson hung reproductions of Weber’s paintings around her studio as she created the new work featured in the show. While Weber has been described as a “portraitist of the used-up and cast-off,” Robson refers to herself as a “glorified janitor,” collecting other peoples’ trash to upcycle into whimsical sculptures made up entirely of plastic and paper debris. Robson’s flowing sculptural forms look organic, as if something one may stumble upon in nature, though they are made entirely of synthetic plastic.

Many of the works featured in Remnant Romance were created using materials and methods that are new to Robson. The two headpieces in the exhibition, Plantpocalypse and Doughnut Economics (both 2020), are made out of plastic strapping combined with used headware (a found hard hat and the artist’s old welding helmet, respectively) – all materials she has never used before. In order to create these and some of the other featured works, Robson also started using a new technique: sewing through plastic using an antique industrial sewing machine. This, along with her use of an ultrasonic welder, has allowed the artist to build her sculpture forms without metal rivets, further adding to their organic appearance.

While Weber maintained that her work was merely aesthetic and not intended to be moralizing, Robson’s deeply pleasing flowing forms are more intentionally provocative. The natural appearance and beauty of Robson’s forms belie their origins in refuse sites and trash bins, and the artist challenges the viewer to consider our collective failure in treating too many things as disposable and the unfathomable amount of waste produced by humanity. Robson is also the founding artist of Project Vortex, an international collective of artists, designers and architects who also work in innovative ways with plastic debris.

“There is a real synergy between Weber finding aesthetic pleasure in spaces of thoughtless consumption and waste and my own desire to add beauty and light to the world through transforming trash,” said Robson. “Weber and I shared an affinity for refuse sites and seeing them as inspirational sites for new beginnings rather than disgraceful endings. Waste to me represents a contemptible lack of grace. My work is an effort to add some measure of grace to the world.”

Aurora Robson (b. 1972) is a multi-media artist known predominantly for her meditative work intercepting the plastic waste stream. Her practice is about subjugating negativity and shifting trajectories. Her work formally references recurring nightmares she had as a child, hybridized with forms in nature. Robson was born in Toronto and grew up in Hawaii. She lived and worked in New York City for over two decades during which time she studied art history and visual art at Columbia University. Recently Robson moved to the Hudson Valley to raise her two daughters.

Robson is a recipient of the Pollock-Krasner Grant, a New York Foundation for the Arts Fellowship in Sculpture, a TED/Lincoln Re-Imagine Prize and a National Endowment for the Arts Art Work Grant. She has exhibited her work internationally in museums, galleries and non-traditional spaces since 2002. Robson’s sculpture Troika is currently featured in an outdoor art exhibition in Summit, New Jersey, where it will remain on view through September 2021. She has also received two major public art commissions which will be announced in the coming months.

Idelle Weber (1932–2020) was an artist closely aligned with both the Pop Art and photorealist movements. Born in Chicago and raised there and in Beverly Hills, California, Weber pursued art while a student at Scripps College and UCLA. In the 1950s, Weber created the first iteration of the silhouette paintings that would become central to her work of the next decade. In 1957, one of Weber’s drawings was included in the Museum of Modern Art’s Recent Drawings U.S.A. and Gertrude Mellon bought the piece from the show.

In the late 1960s, Weber started painting a realist series from photographs she had taken of New York City storefronts. Over the next few years, with the encouragement of gallerist Ivan Karp, Weber developed this approach, painting fruit stands and curbside trash. The first presentation of her Photorealist works at Hundred Acres Gallery in 1973 established her reputation as a key figure in the movement alongside Chuck Close, Richard Estes, and Audrey Flack. Her paintings were subsequently exhibited at OK Harris Gallery and featured in Real, Really, Real, Superreal; Directions in American Realism at the San Antonio Museum of Art (1981) and Six Takes on Photorealism at the Whitney Museum of American Art (1992). In the following decades, Weber focused on images of discarded bottles, boxes and other refuse, as well as foliage, flowers, pebbles, and other natural subjects.

Weber’s artwork is held in many public collections including the Metropolitan Museum of Art, the Art Institute of Chicago, the Museum of Modern Art, the Whitney Museum of American Art, the Harvard Art Museums, the Smithsonian American Art Museum, the Brooklyn Museum, and the Chrysler Museum of Art, among many others. Weber passed away on March 23, 2020 at the age of 88.