Fabian Lang presents Reigen, a group show of seven exceptional artists, whose work exists here, communication with each other in shifting movements, as in a dance. Many of the works boast a keen sense of the surreal and fantastical, and the figurative and abstract interplay in myriad ways. 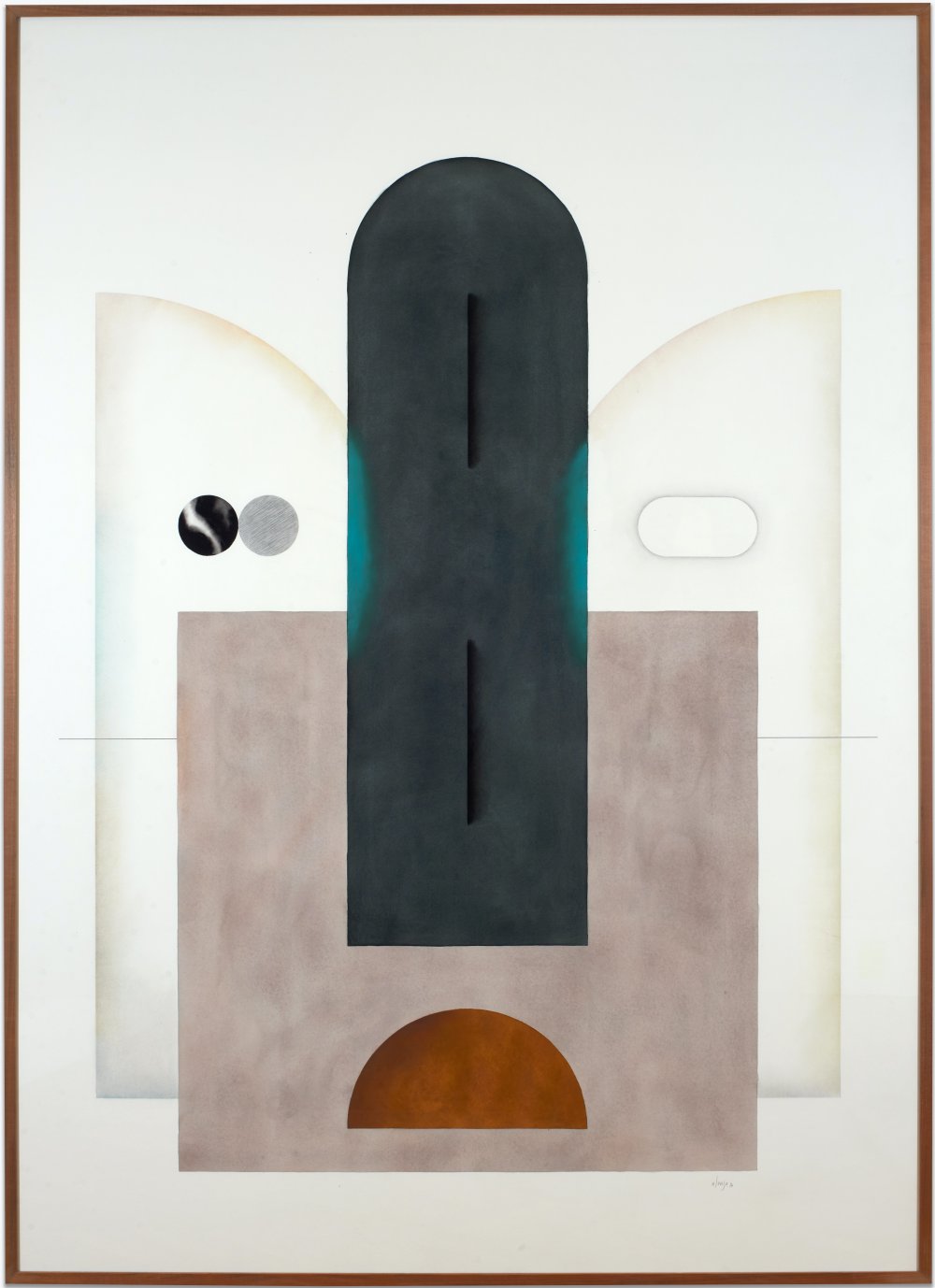 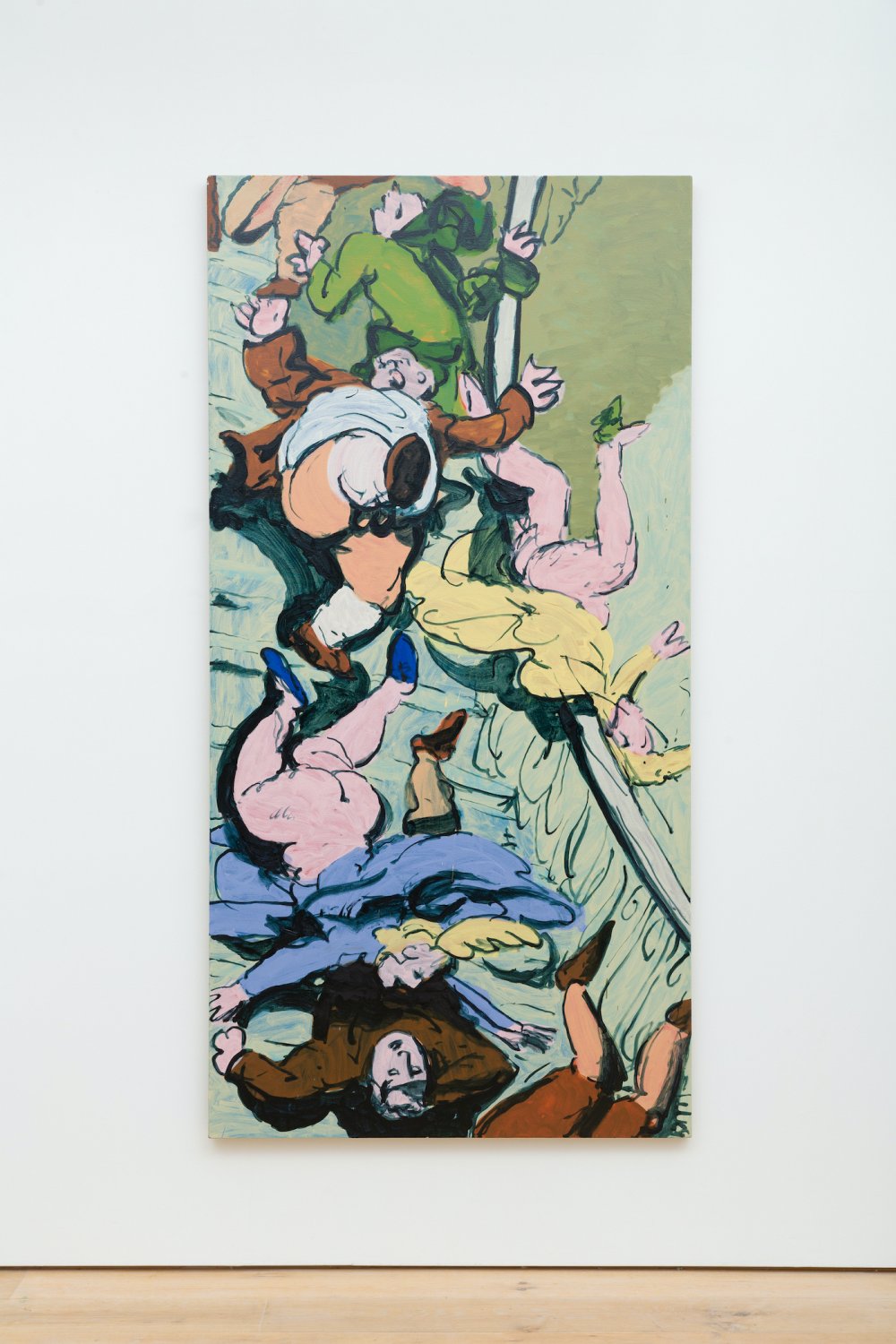 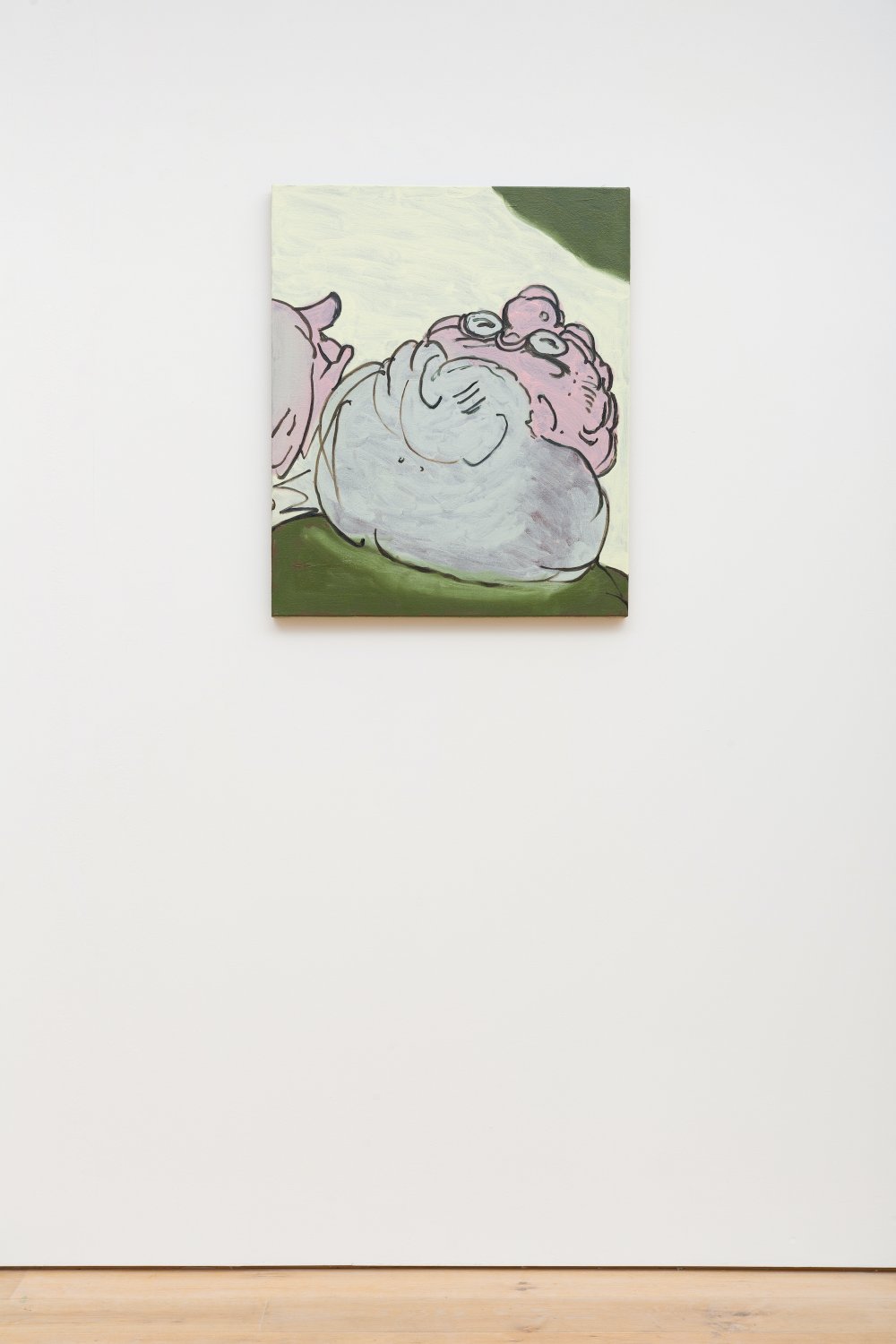 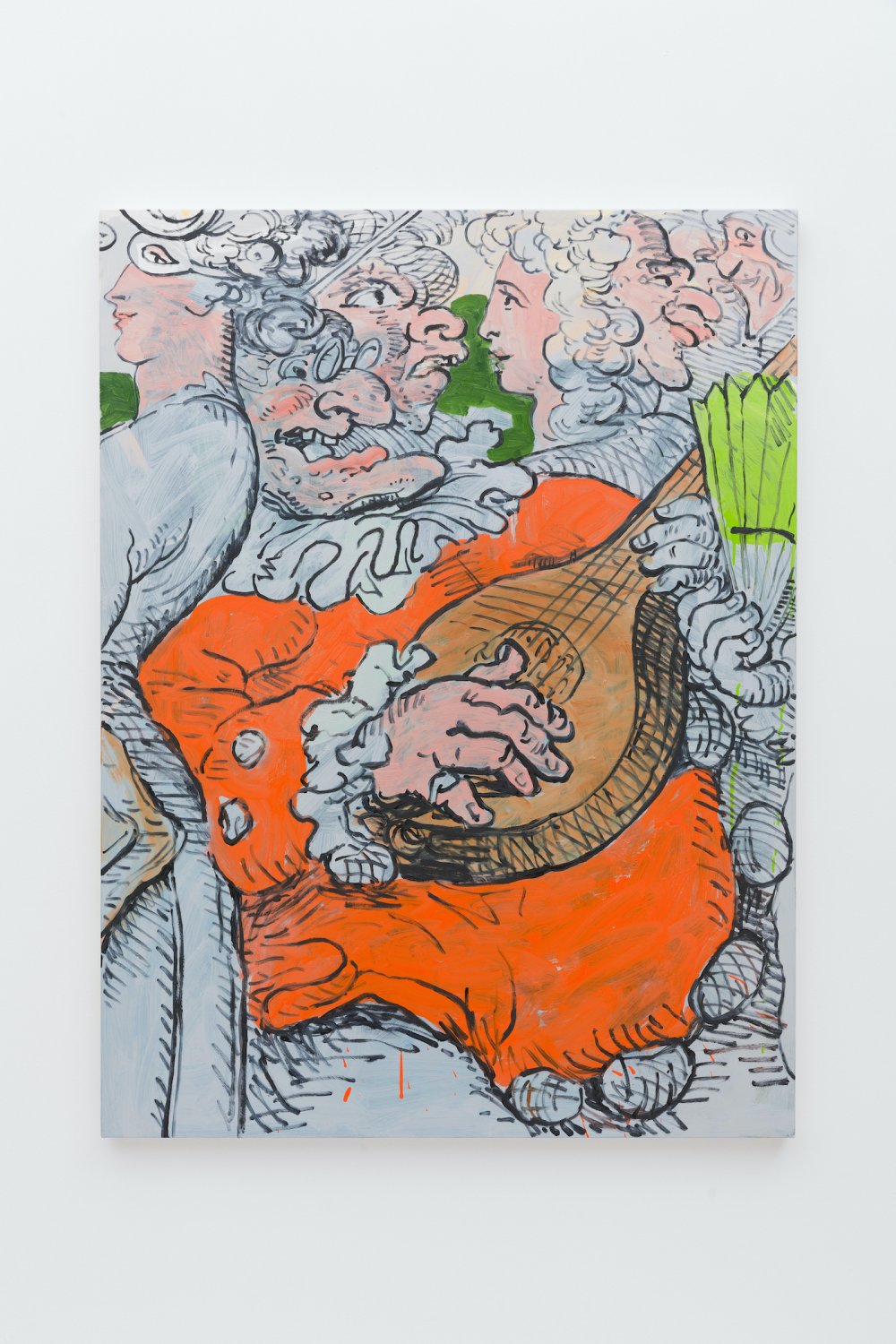 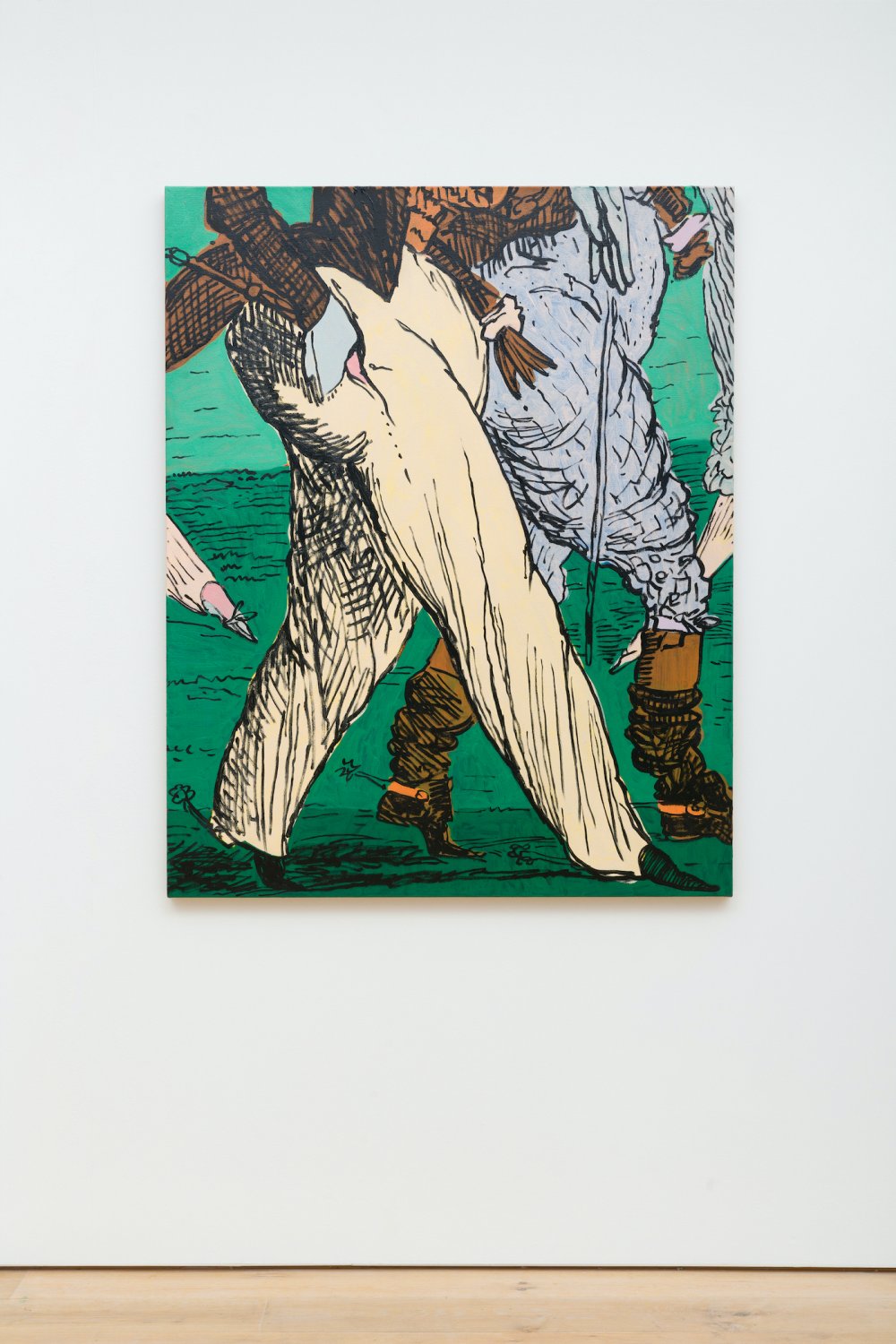 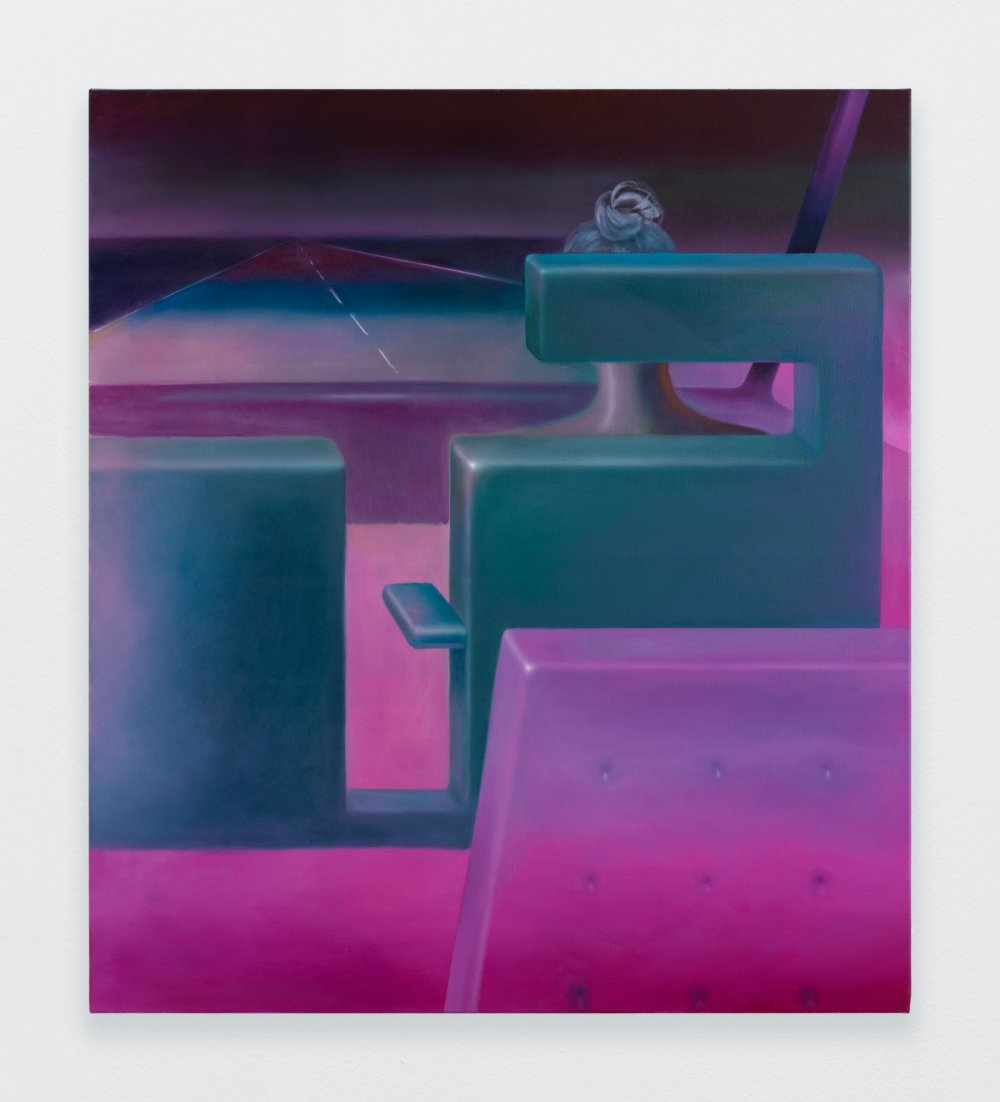 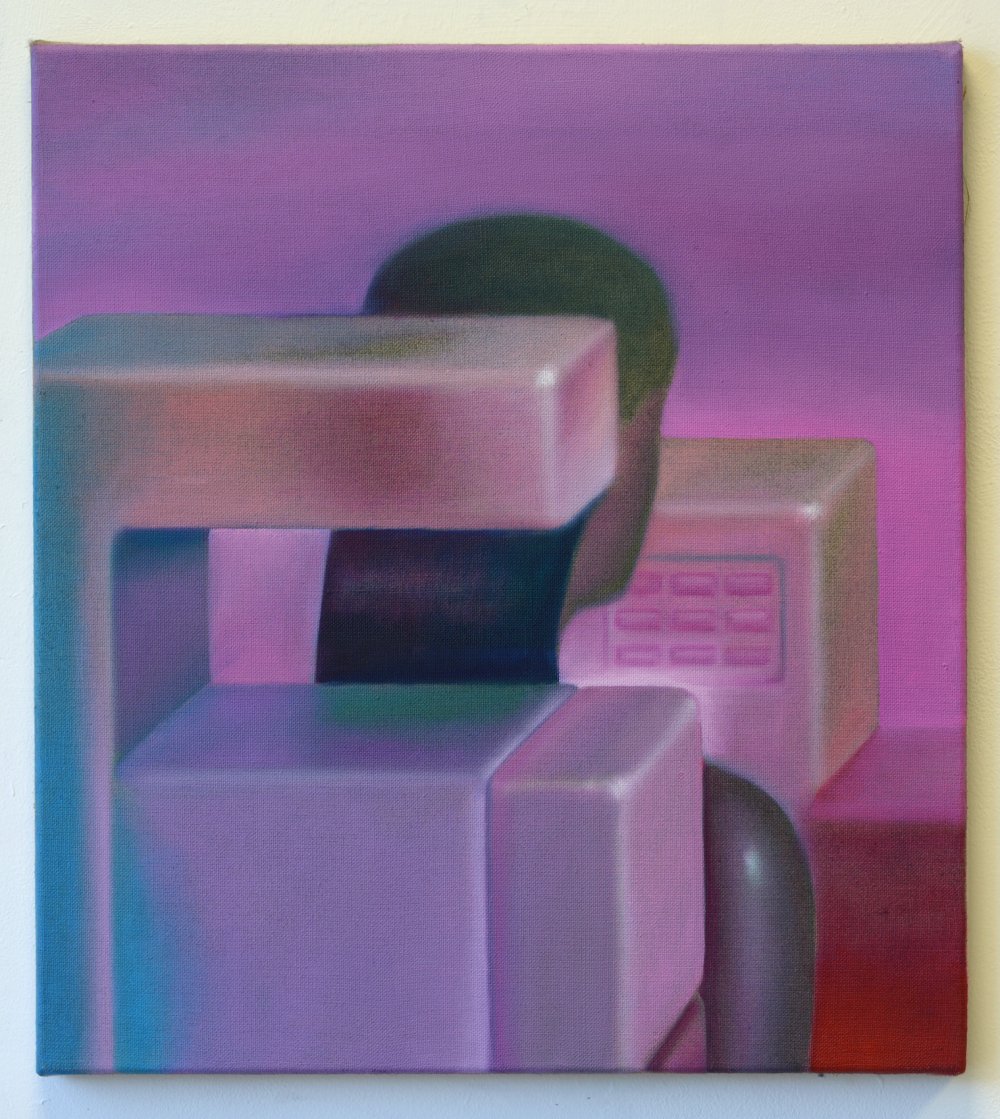 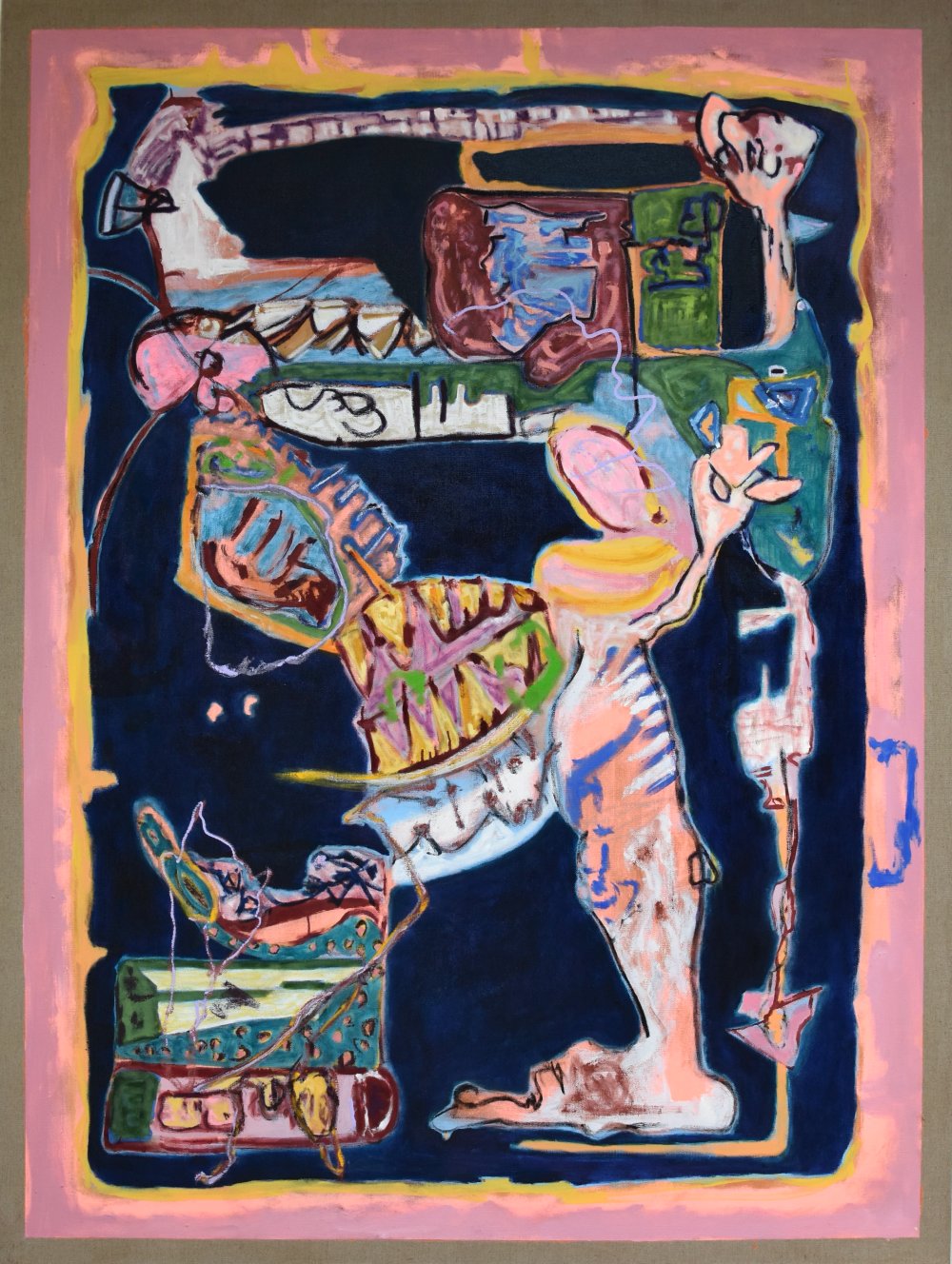 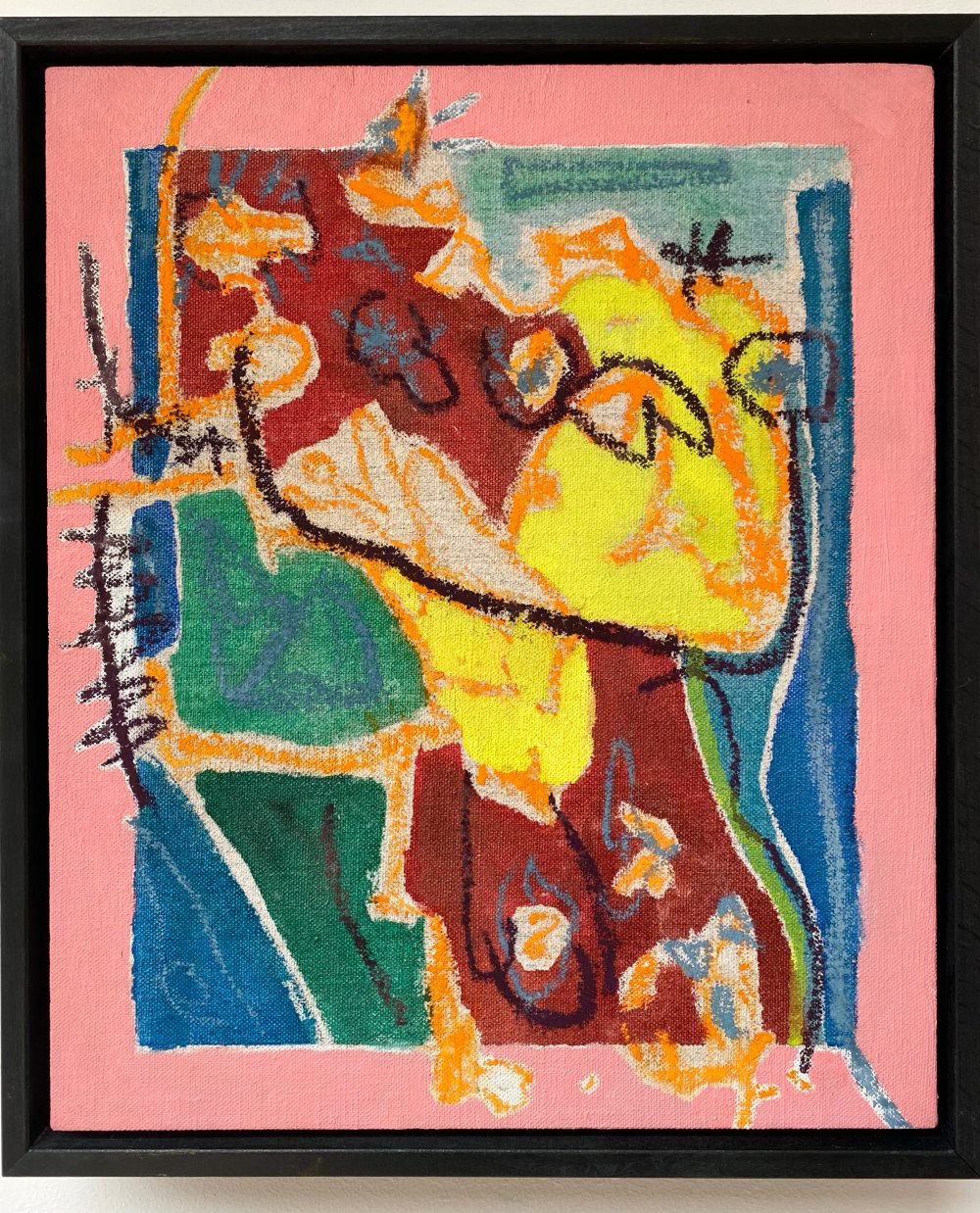 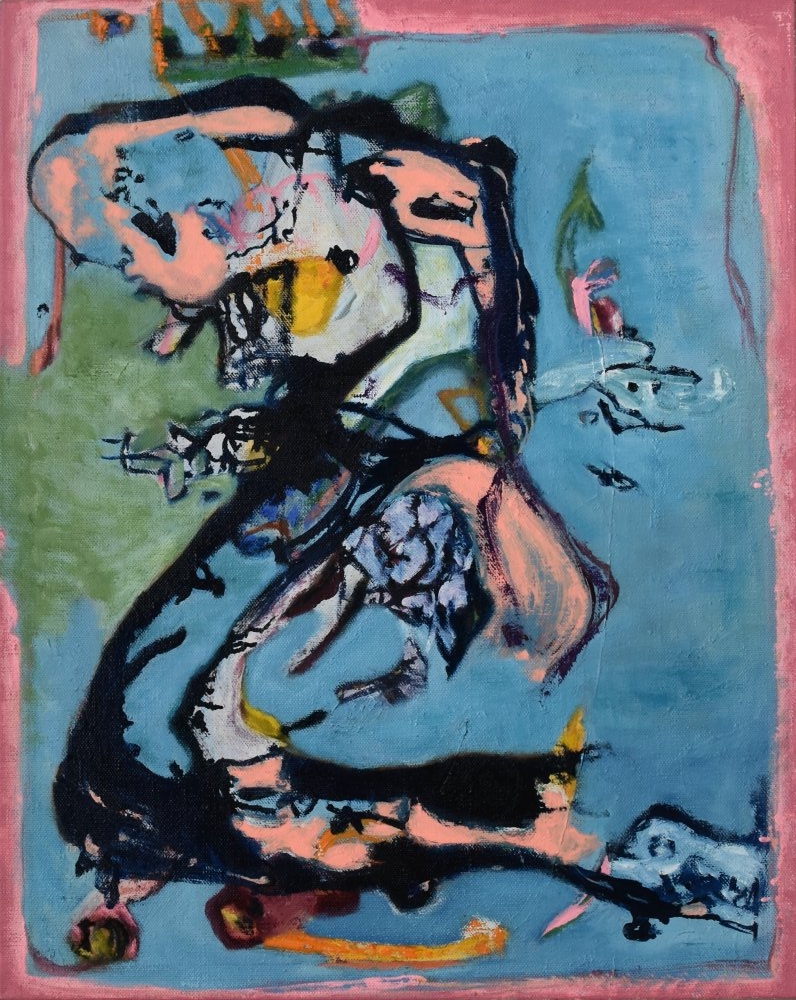 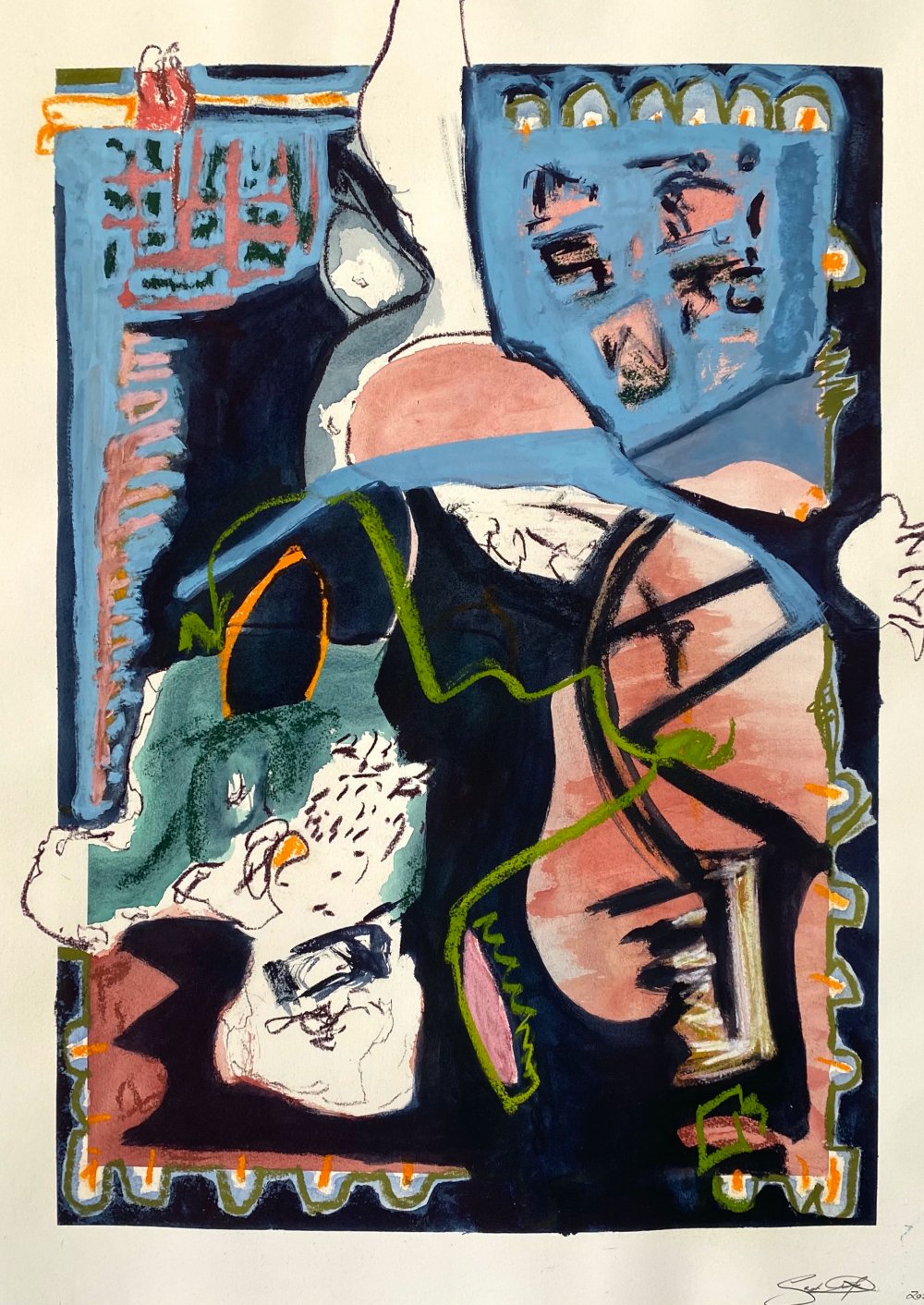 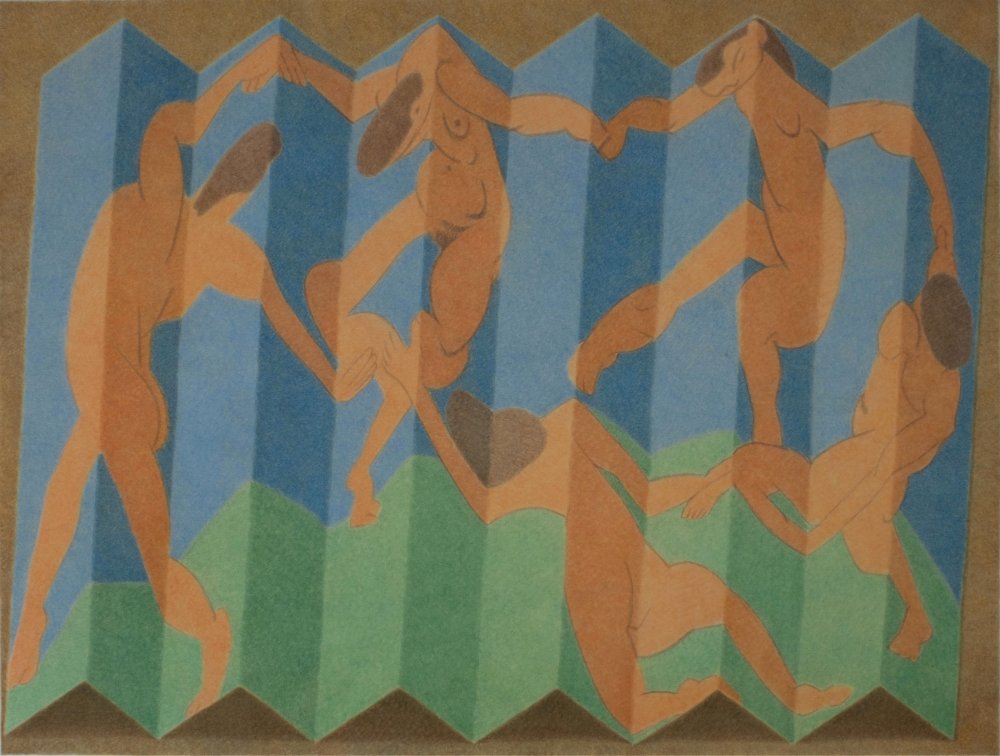 Johnny Izatt-Lowry
A postcard of Matisse’s ‘The Dance’, folded and on a table, 2021 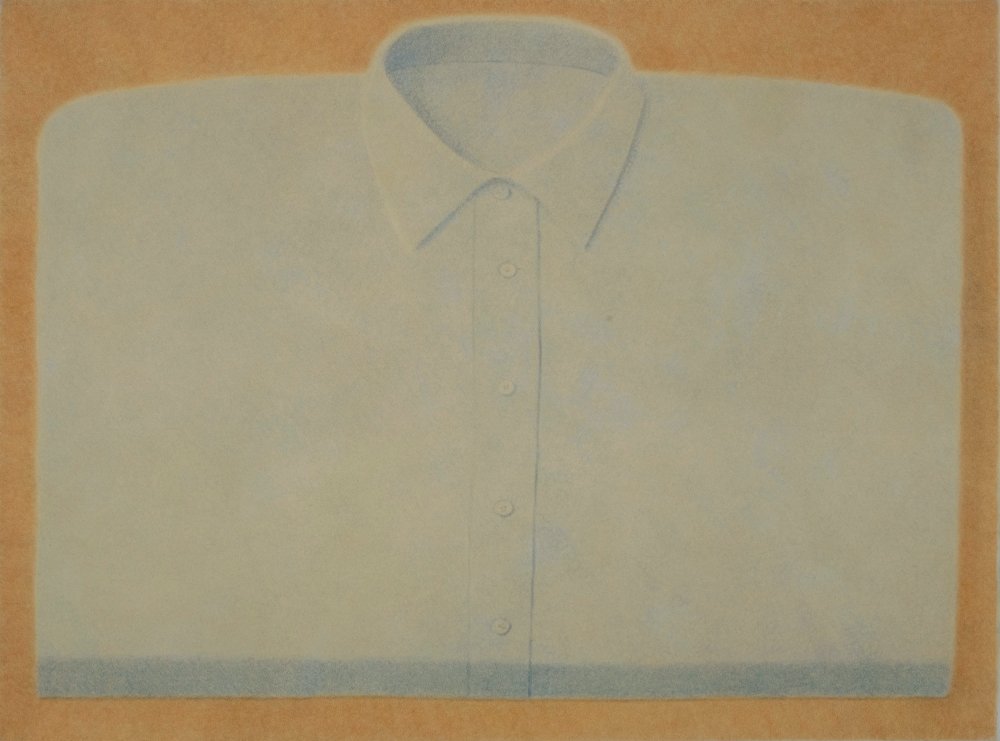 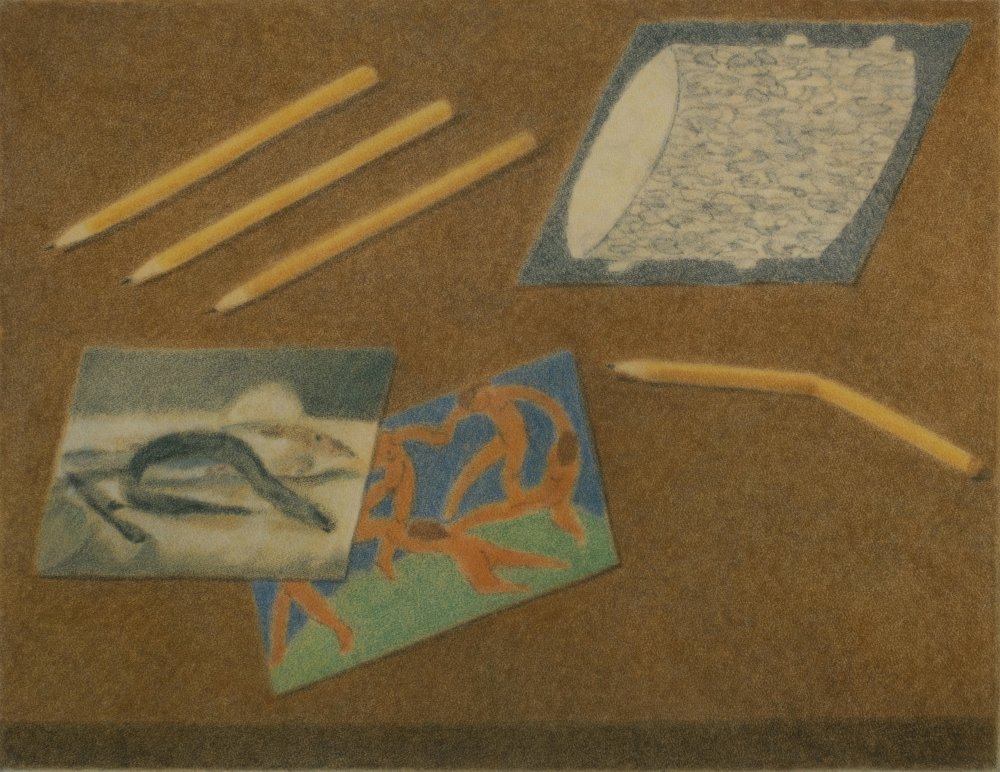 Johnny Izatt-Lowry
A still life on a table, 2021 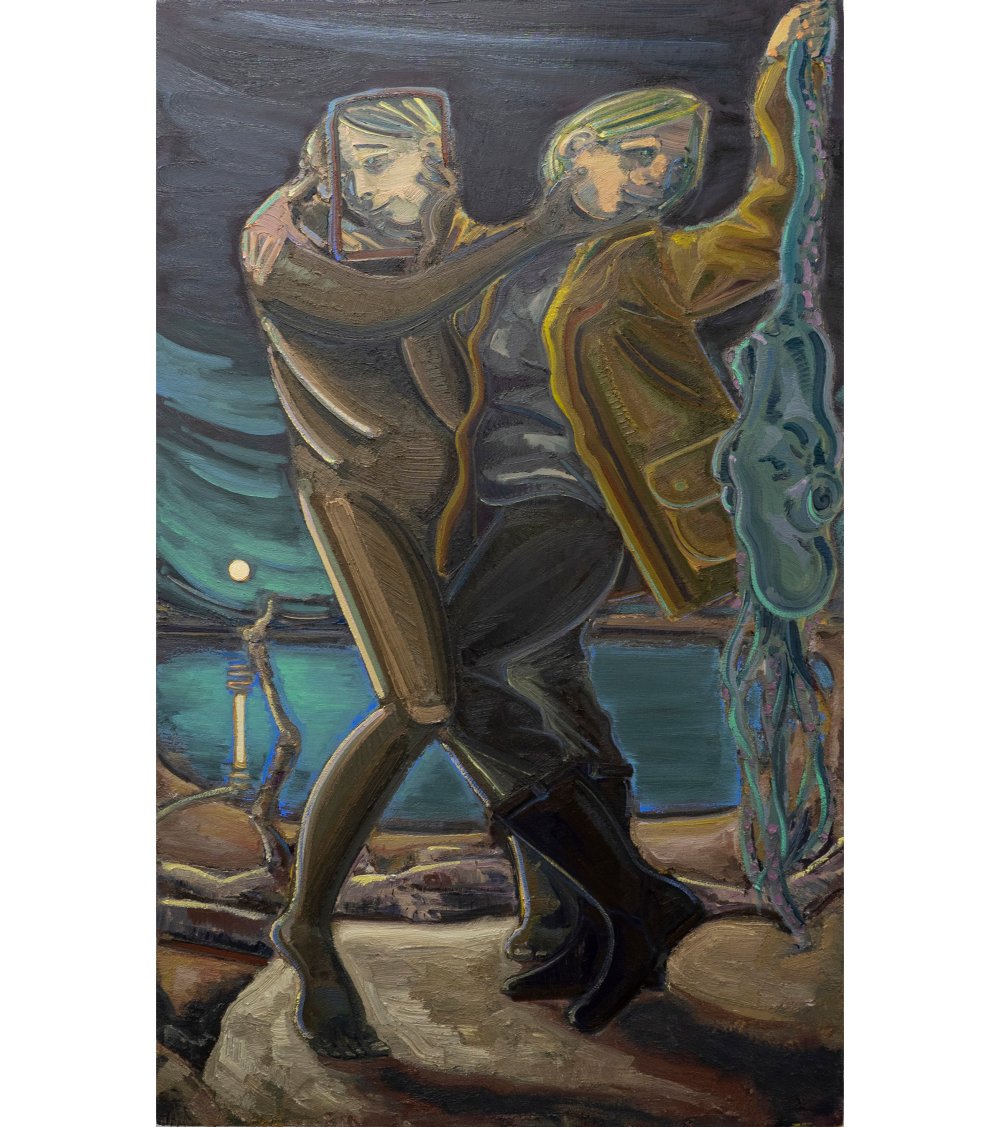 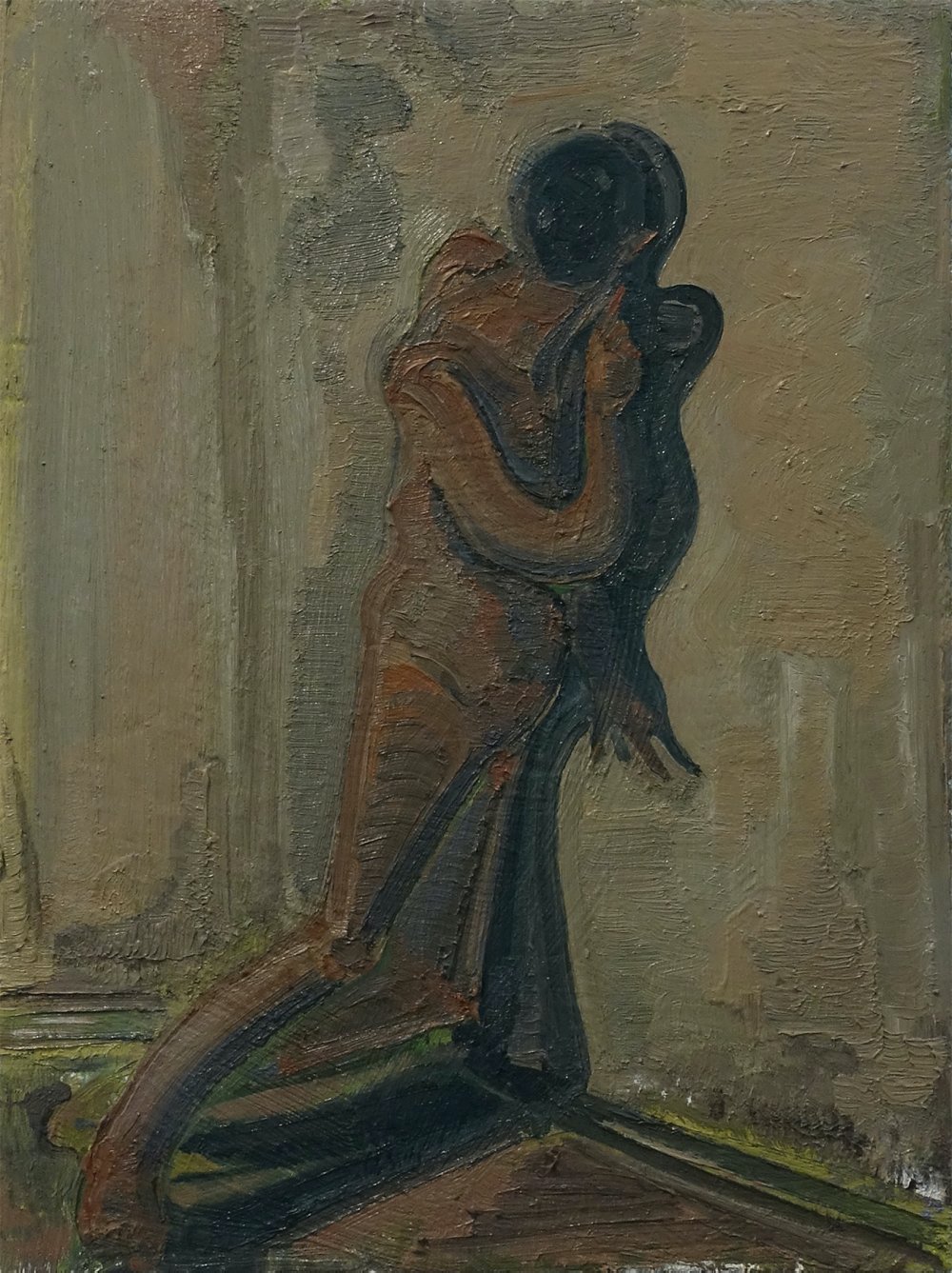 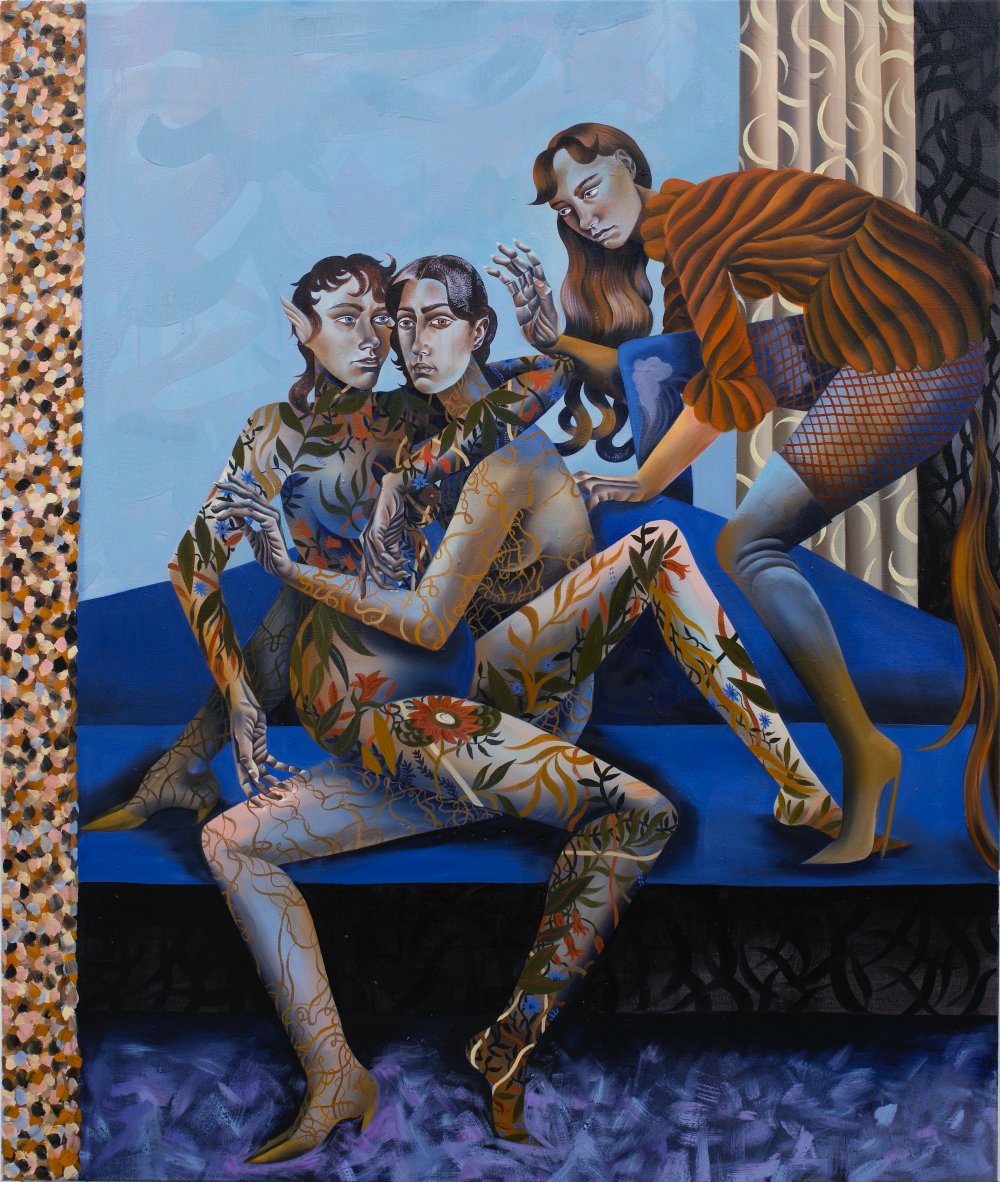 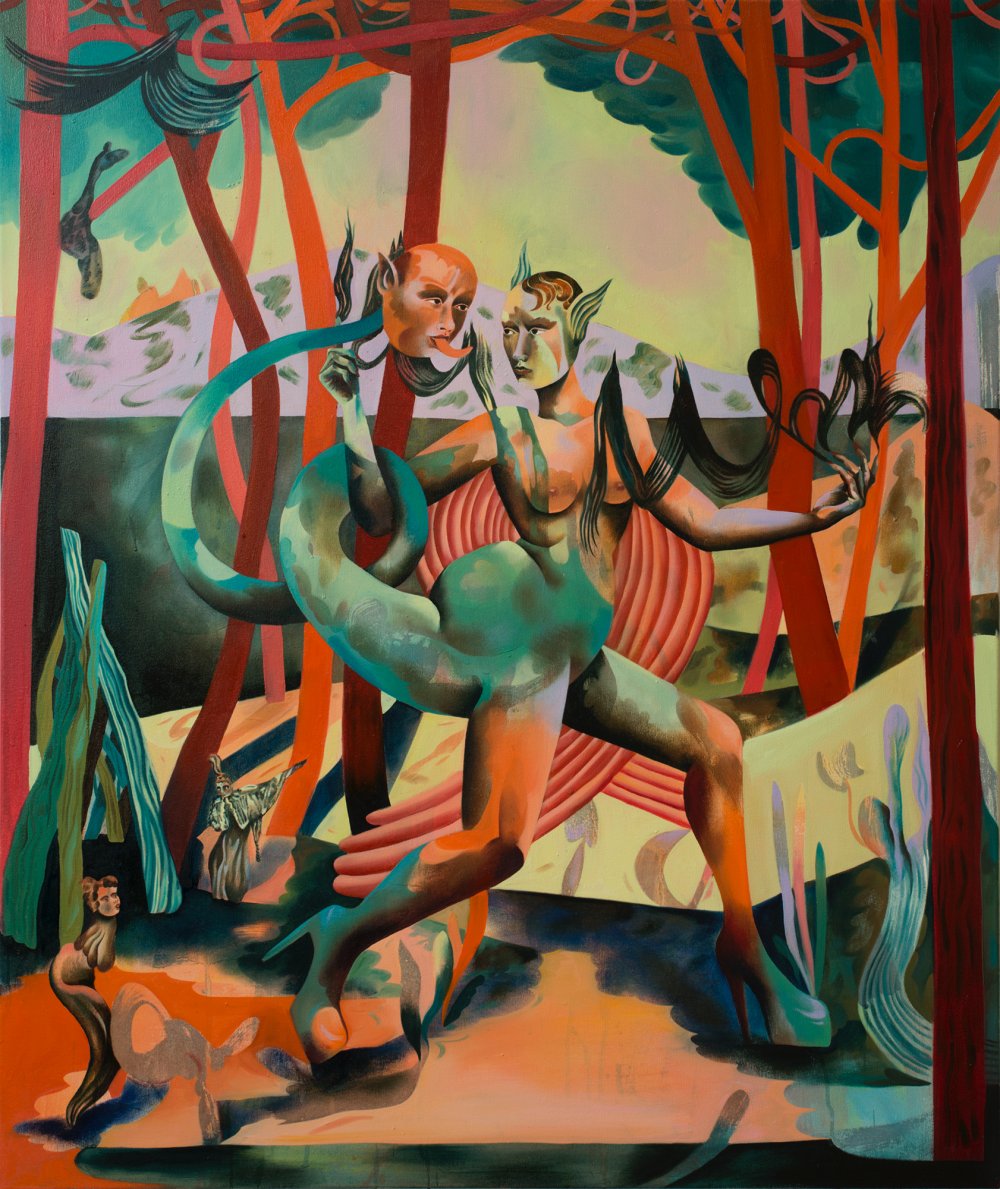 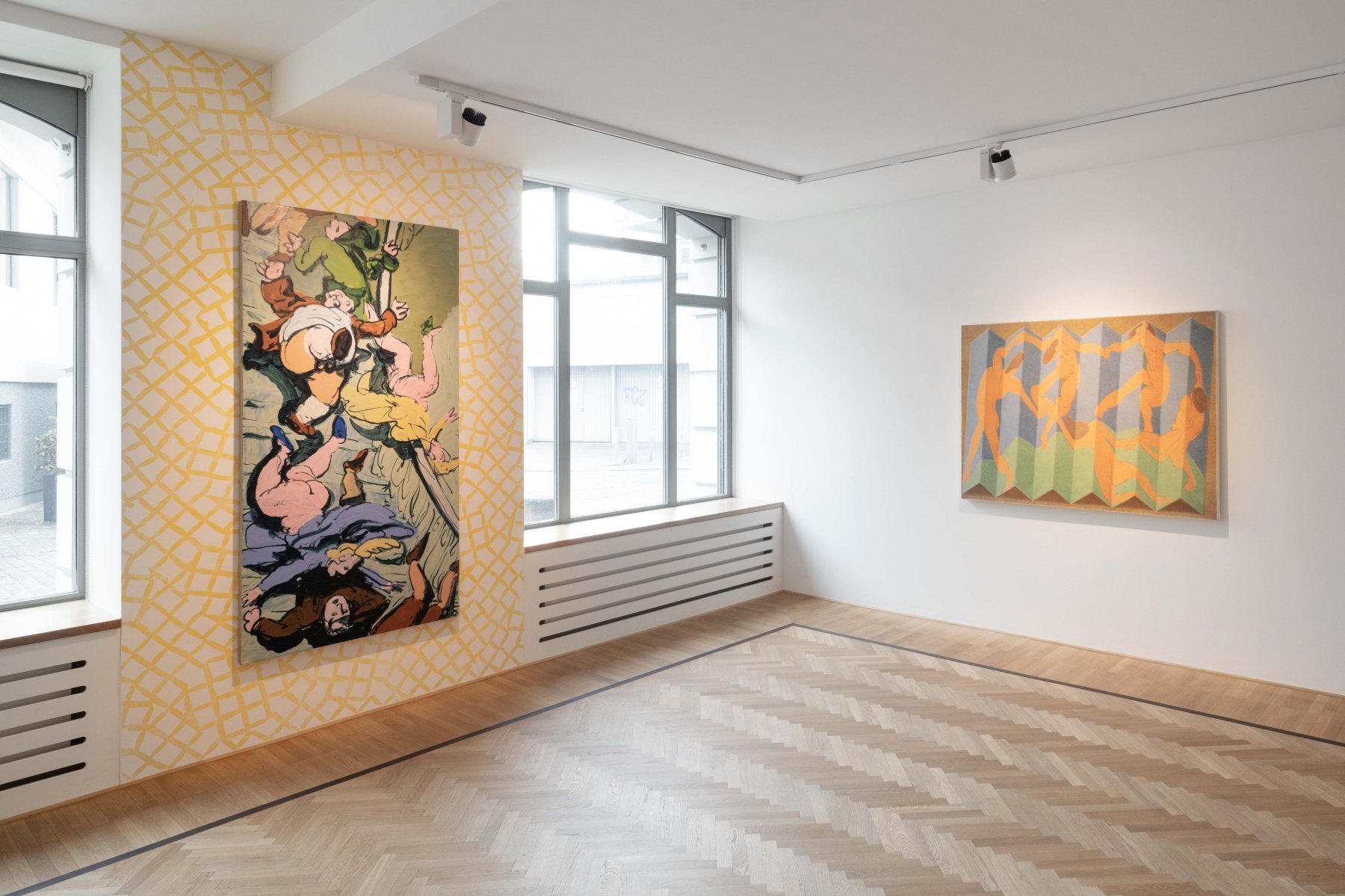 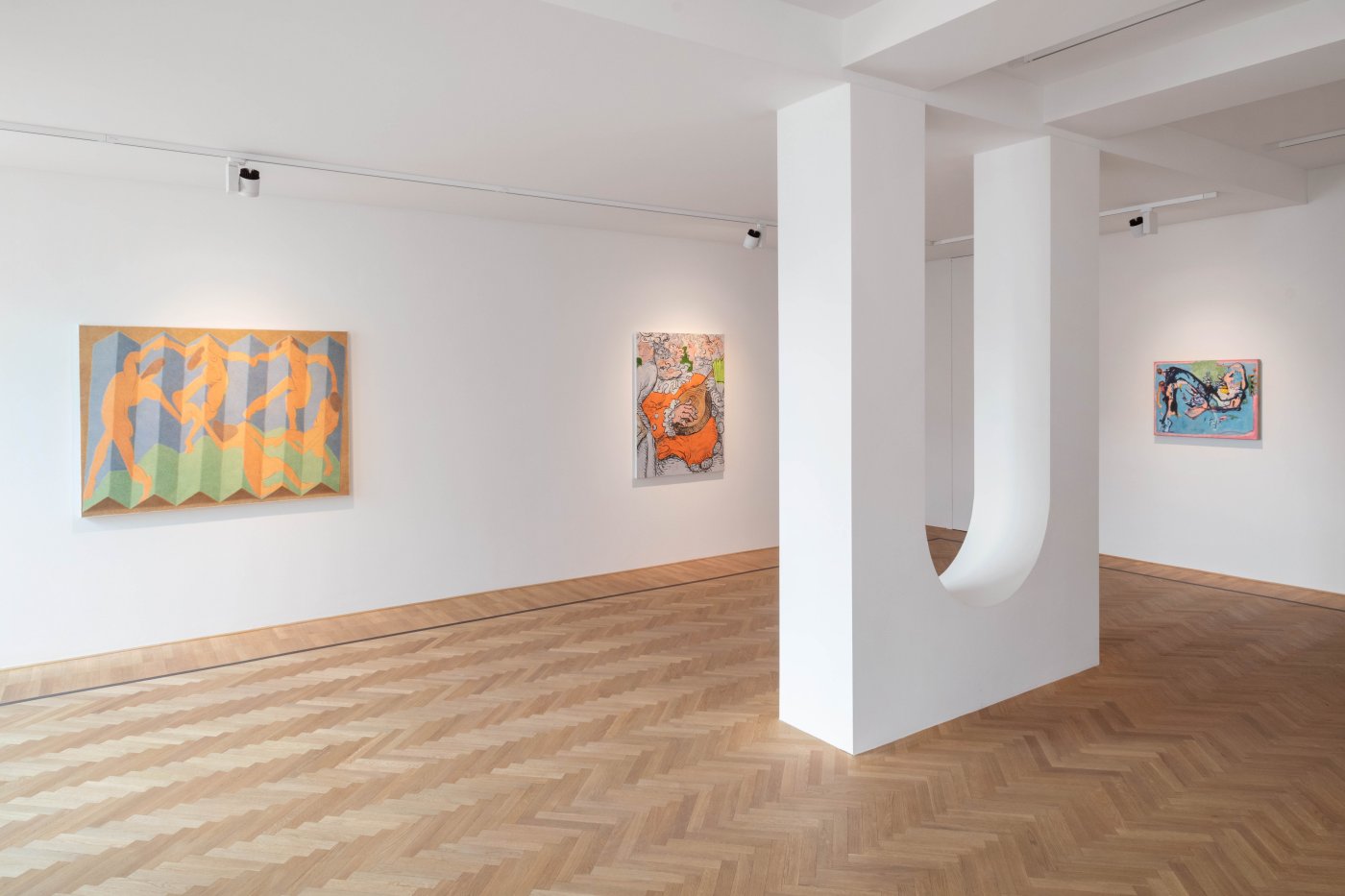 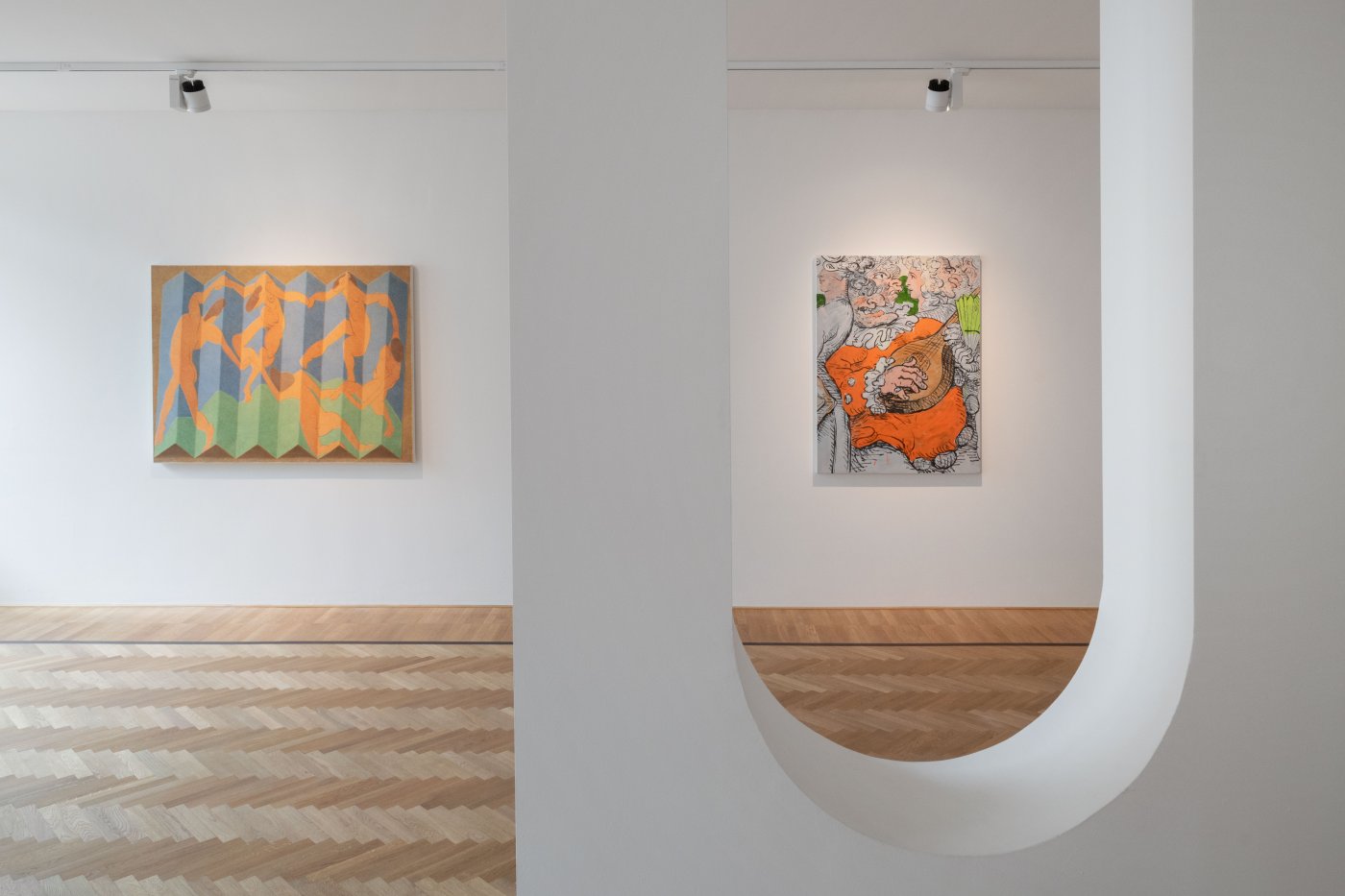 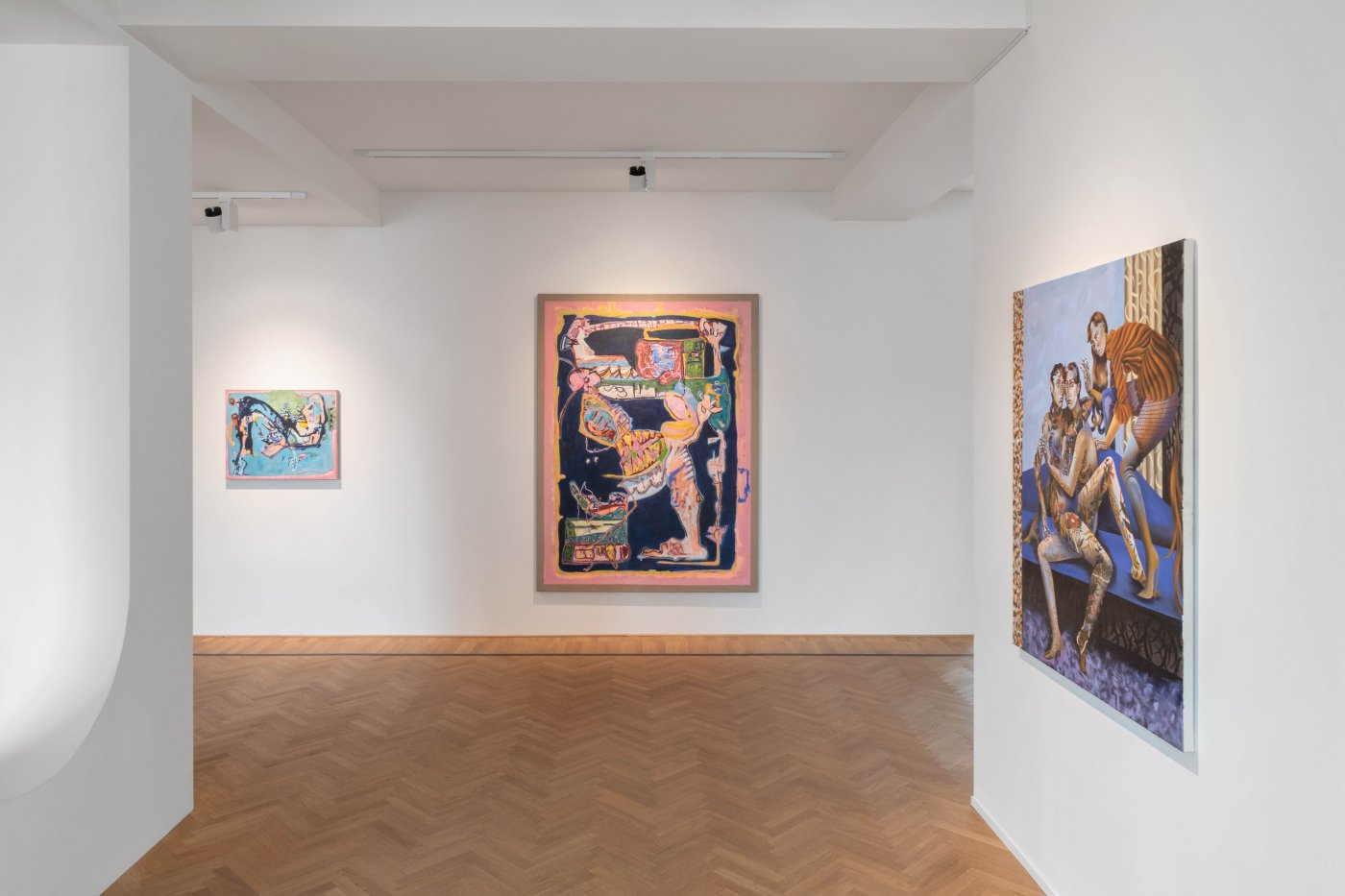 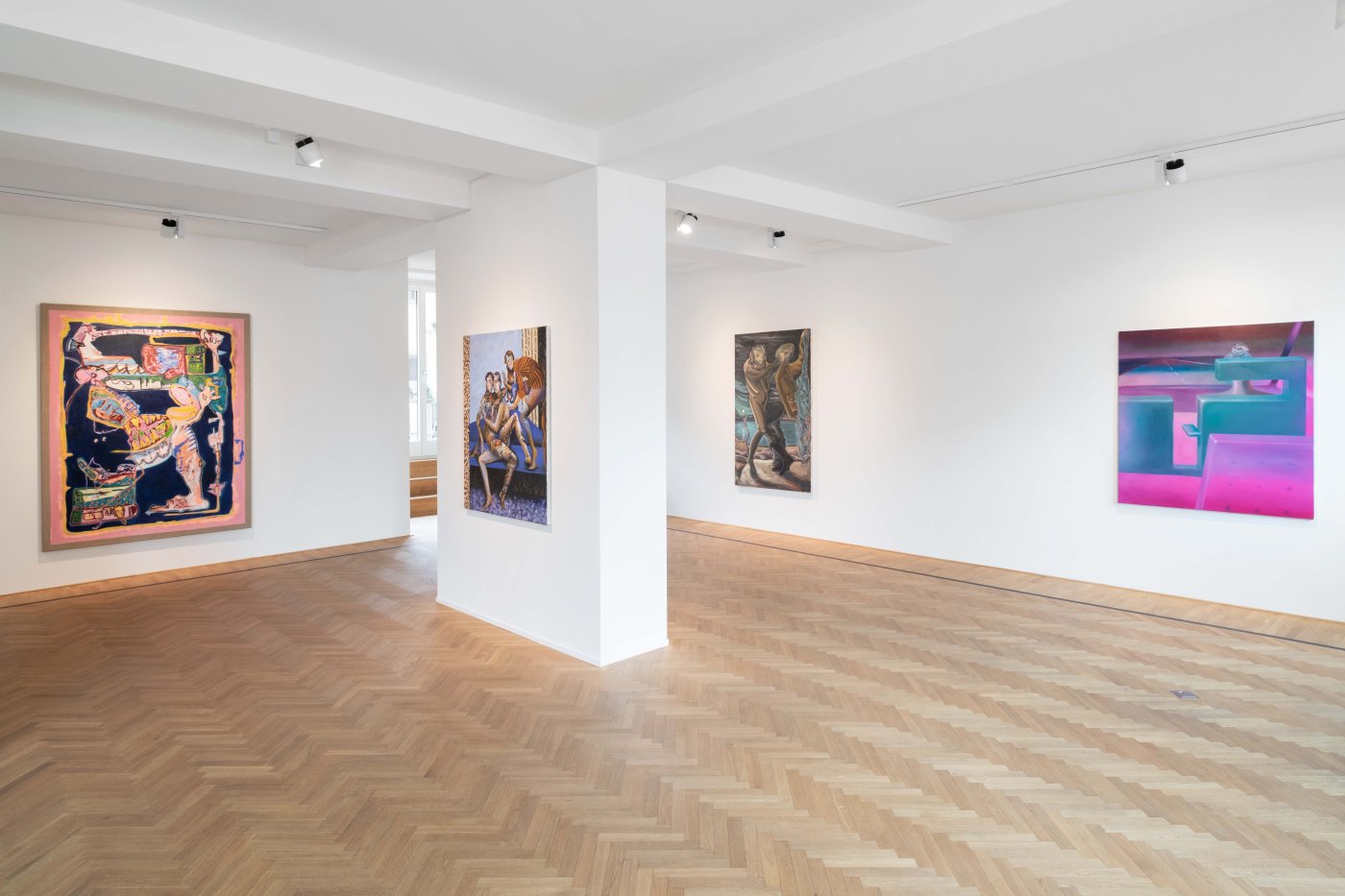 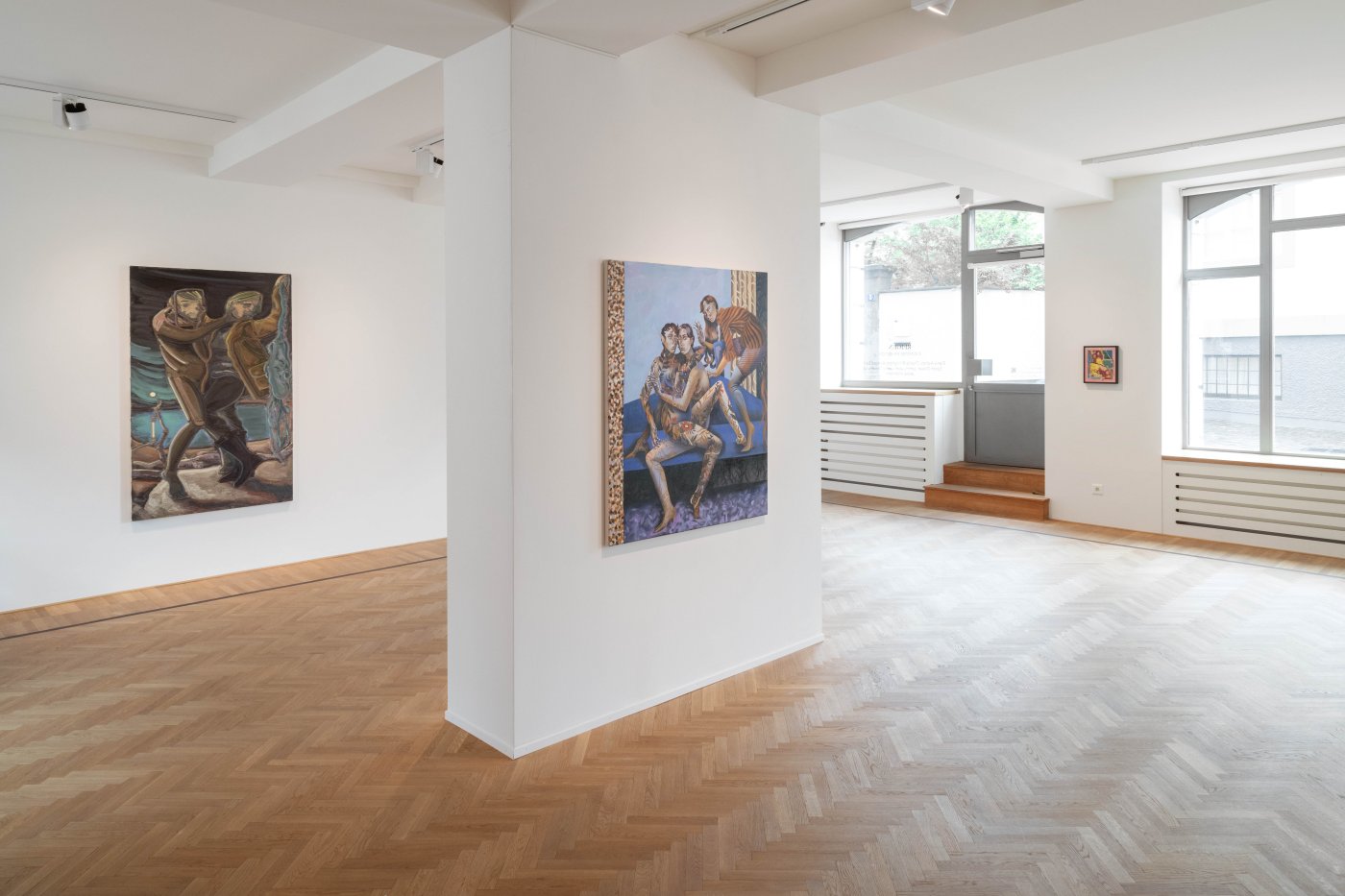 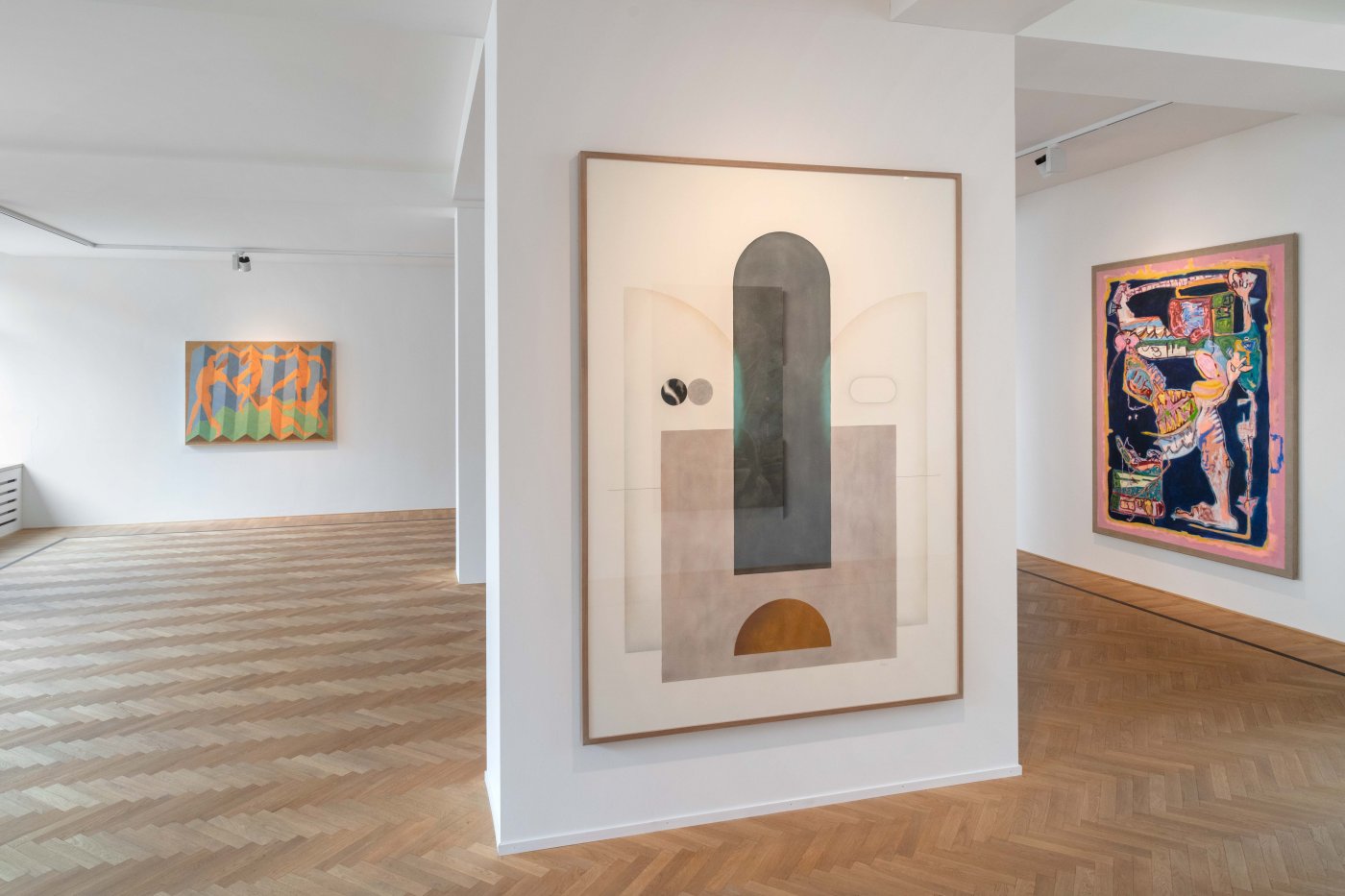 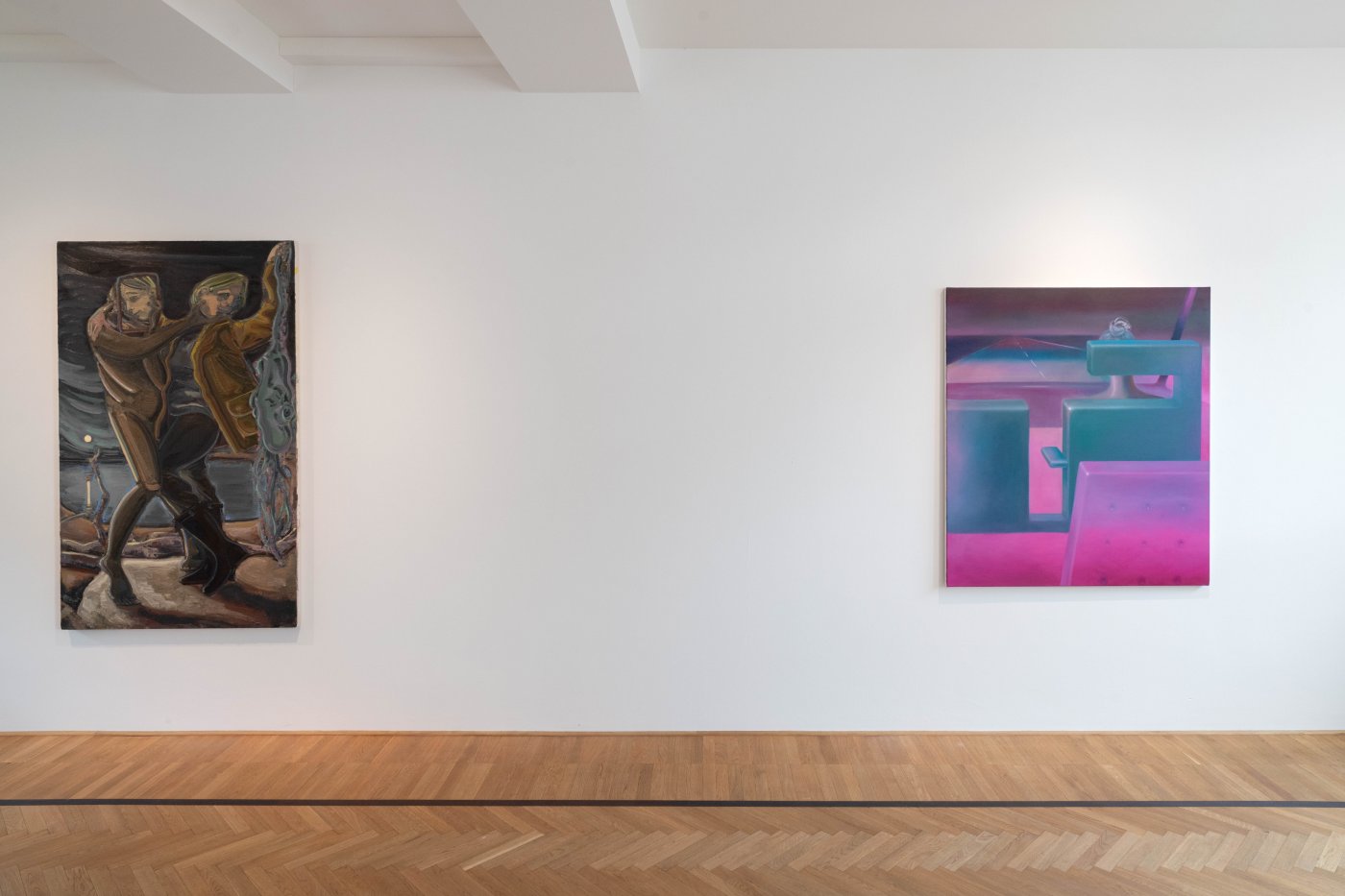 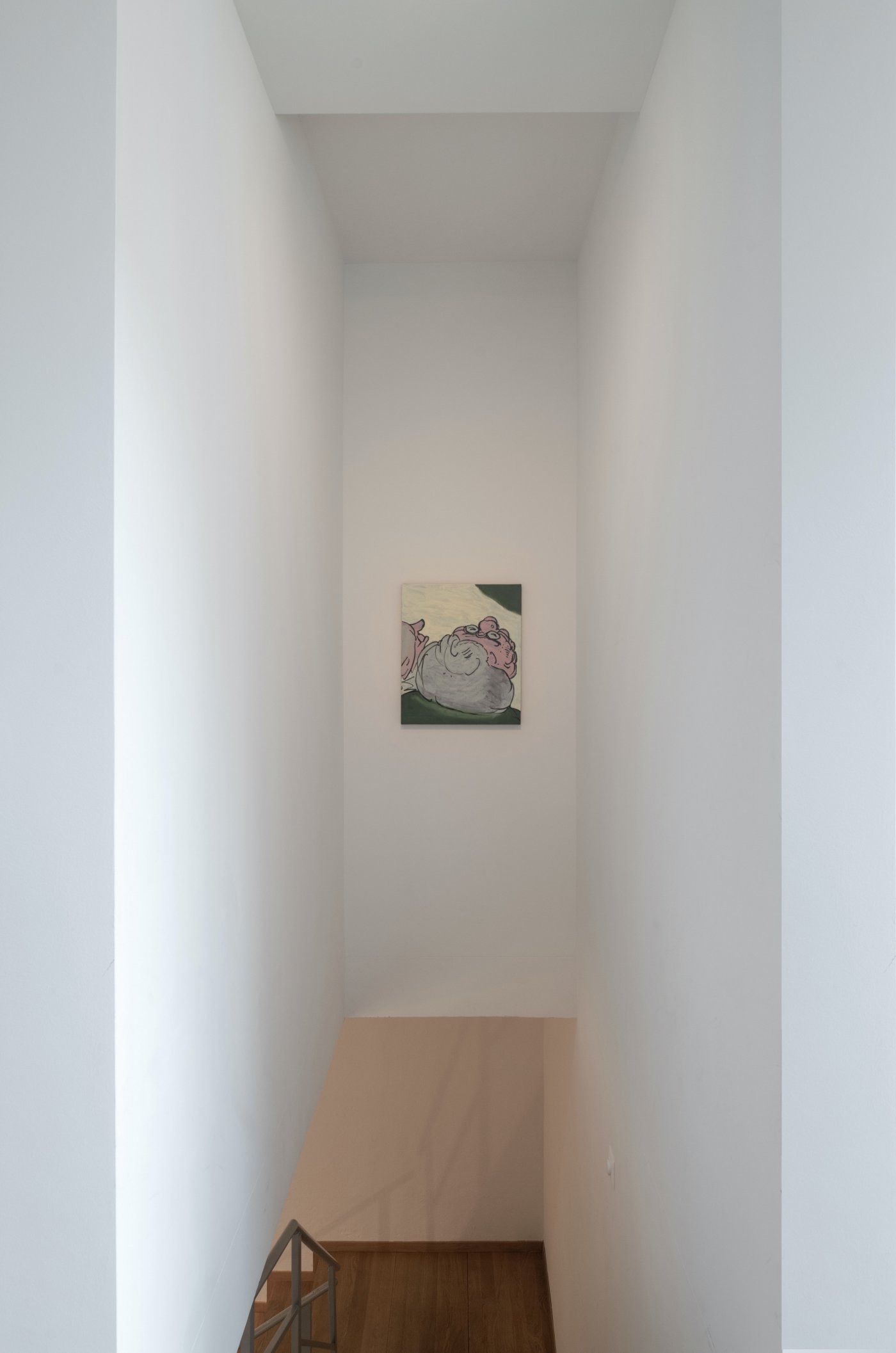 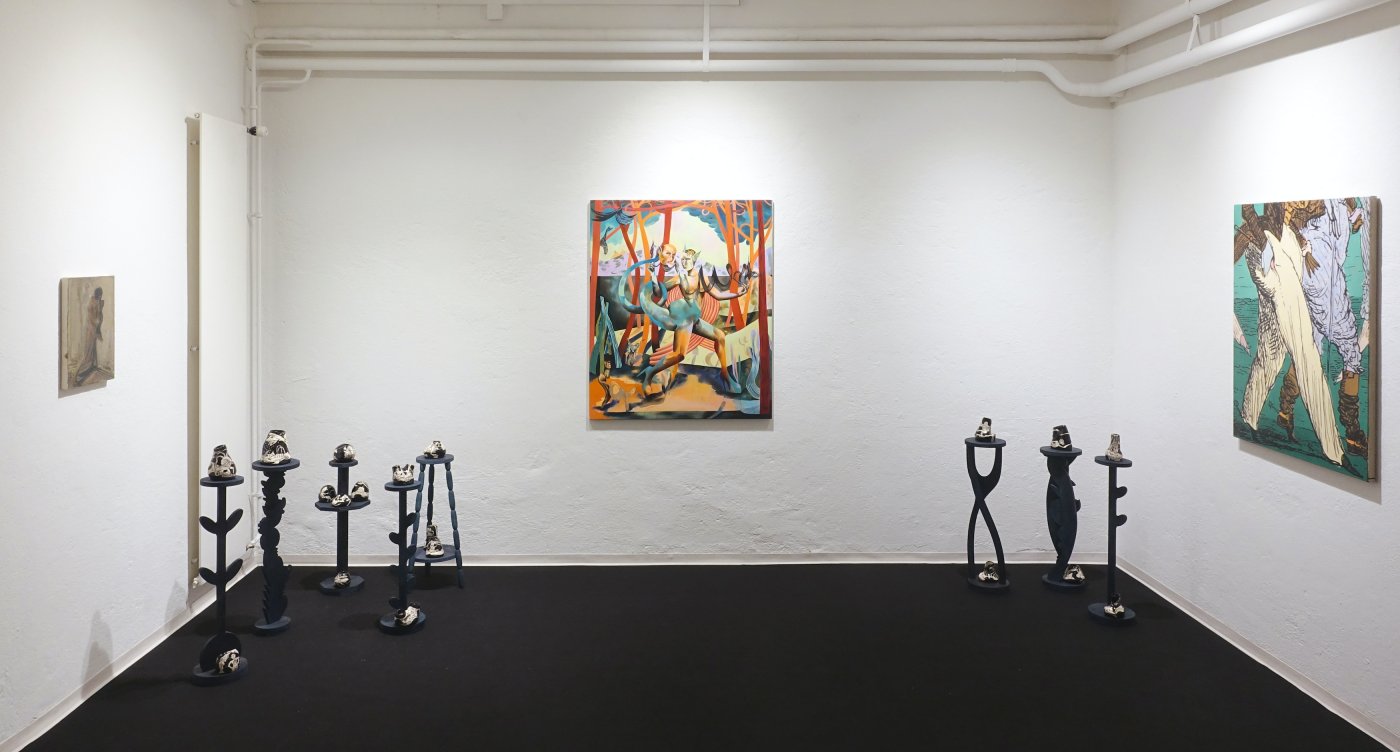 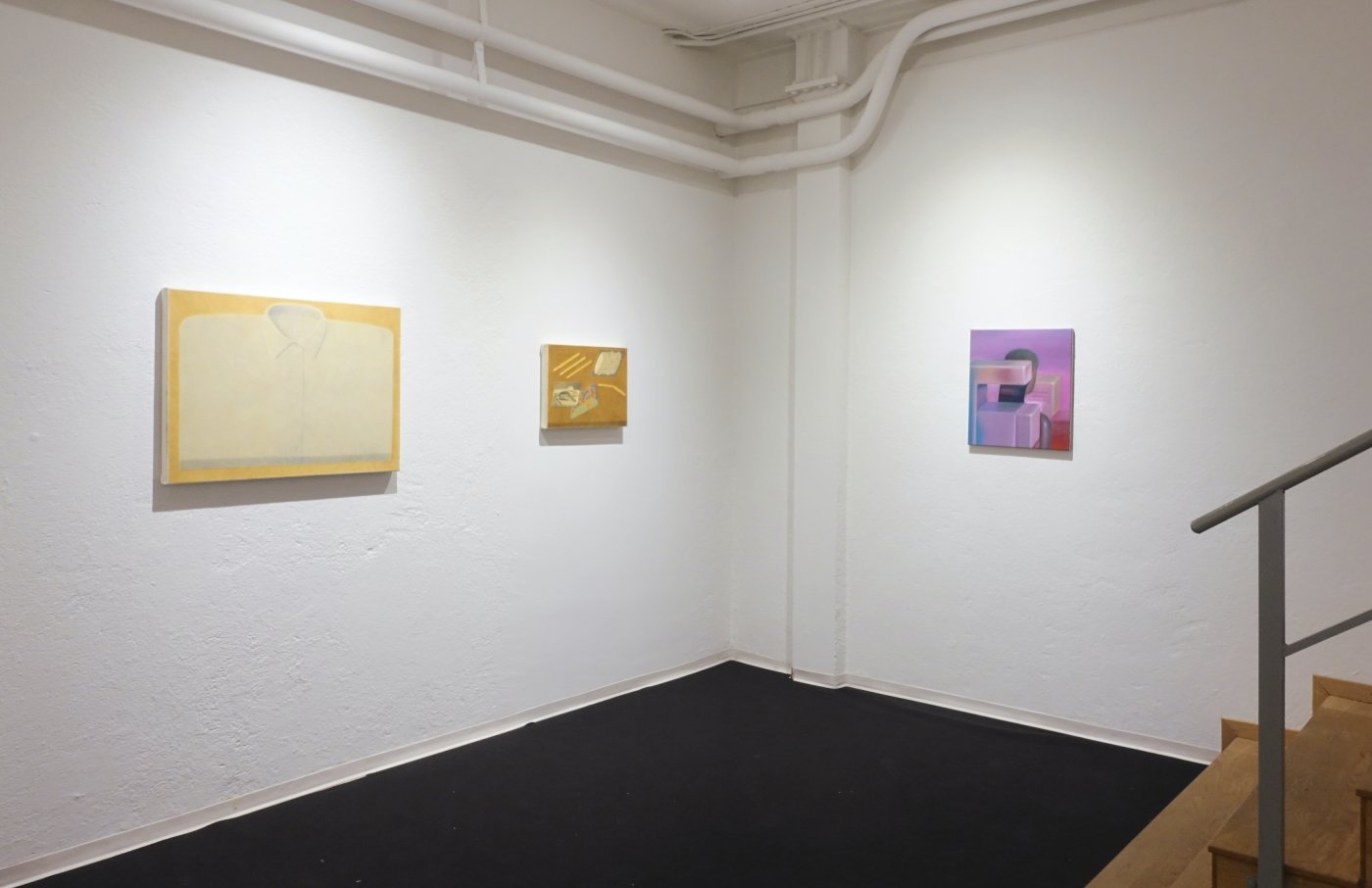 Johnny Izatt-Lowry’s works invoke subtly surreal depictions of everyday things. At first familiar in their quiet domesticity, there is something a little unnerving in their awkward perspectives and plays on pictorial representation. In ‘ A postcard of Matisse’s the dance, folded and on a table’ the premise is at first uncomplicated, described simply in the works title. It shows a ‘still life’ of the postcard which has been folded and presented with a jarring perspective in which we are looking at it from above but also as if it is sloping away from us. The work plays with traditions of tromp l’oeil painting, questioning ideas of illusion, space and volume in the history of painting. The original figures from the dance now take on a new dynamic quality as they move across the folds in the painting.

Izatt-Lowry’s works are made through the laborious process of applying layers of dry pigment and soft pastel to stretched crepe fabric. Their materiality and surface adds to the uncertainty of the subjects. Although initially read as paintings, their materiality denies easy classification, the soft surface and powder giving them a fragility, adding to their dreamlike qualities.

Charlie Billingham takes cropped sections of imagery from Georgian and Regency-era satirical prints and drawings to create his paintings. Through this act of editing, he removes the original narratives, isolating particular moments, gestures and expressions, to create new compositions. Thus decontextualized, his paintings are able to be read with new and ambiguous interpretations. His paintings are often hung on hand painted and printed walls, which are created with stamps made by the artist, based on his watercolour drawings.

Sarah Dwyer’s current works are exuberant re-imaginations of bodily forms, rooted in her regular commitment to life drawing sessions. Executed with a mischievously subversive approach to painting and drawing, her compositions reflect live subjects through playful linework and vivid, robust colour. Scale and speed are as rudimentary as material and application in her work – a balance between technical and intuitive process.

Richard Burton’s paintings come out of a larger body of work, which was initially focused on car interiors. As the series developed, they became more distilled; warped and expanded, they presented a whole set of possibilities around world-building, so that each painting becomes a glimpse into an altered reality. A sense of emotional distance is important to Burton, as is putting the viewer into the position of passenger. This position is ambiguous in its mood: exhilarating and seductive while also claustrophobic. By reworking each painting several times so that they change dramatically, they take on a quality that is removed from the artist personally, yet resonates with his experience.

Elena Alonso’s drawings and sculptures continually redefine their own formal limits, engaging with an ambiguous iconography that one feels refers to an underlying universe that we have somehow lost touch with. She cultivates a complex and uncertain terrain between geometric abstraction and organic representation, often alluding to the body. While utilising the languages of other disciplines such as architecture, design and handicraft, she liberates them from their inherent practical purpose. There is always a strange tension between the neatness of her work, the beauty of her compositions, and the uncertainty of explaining exactly what one sees. Perhaps it is this strange combination of harmony and paradox that creates an atmosphere that promotes something we could call tragic Platonism.

Makinson’s painting takes inspiration from science fiction and classical mythology. It confuses the boundaries separating human from animal as well as from desire and fear. Her painting belies concurrent understanding of reality, replacing the world as we know it with an adventurous yet unreliable narrative. Most of her subjects exhibit distortions of power play, with the artist fashioning the figures in subversive means of dress and undress. She also utilises underpainting as a key player in her storytelling in order to unify all the seemingly disparate substances represented. Makinson explained her underpainting on the canvas as it “seeps and drips through like rotten flesh or bruised fruit,” which contrasts with the still figures in the foreground. These combined elements infuse her verdant forest scenes with a wild sense of chaos, fantasy, and seduction, evoking the chase between the hunter and the hunted.

Timothy Lai’s paintings are often personal in nature, using real events and situations as starting points for his compositions. They take a turn from just simply being autobiographical though. Through the mix of a rigorous application of expressionistic gestural brush strokes and a figurative approach he contorts and bends the situations to allude to larger interrogations of interracial love, family relationships, and the artist’s biracial identity.

In Night Catch, 2021 for example he was thinking about the time that his partner and he had snuck into a private beach, and the potential of getting caught. “I was thinking about the difference in comfort and how my girlfriend and I navigate some of these spaces differently.” Oftentimes narratives like this spark questions for him such as – who belongs? Who has access? What are the consequences of our actions? The severity of consequences?

Courtesy of the artists and Fabian Lang, Zürich