The Gallery presents an exhibition on sculpture, with a selection of works by Rebecca Horn, Etienne-Martin and Bernd Lohaus. Certainly, three artists with different style and vocabulary but whose hanging and showing for this exhibition reveals unexpected poetic proximities. 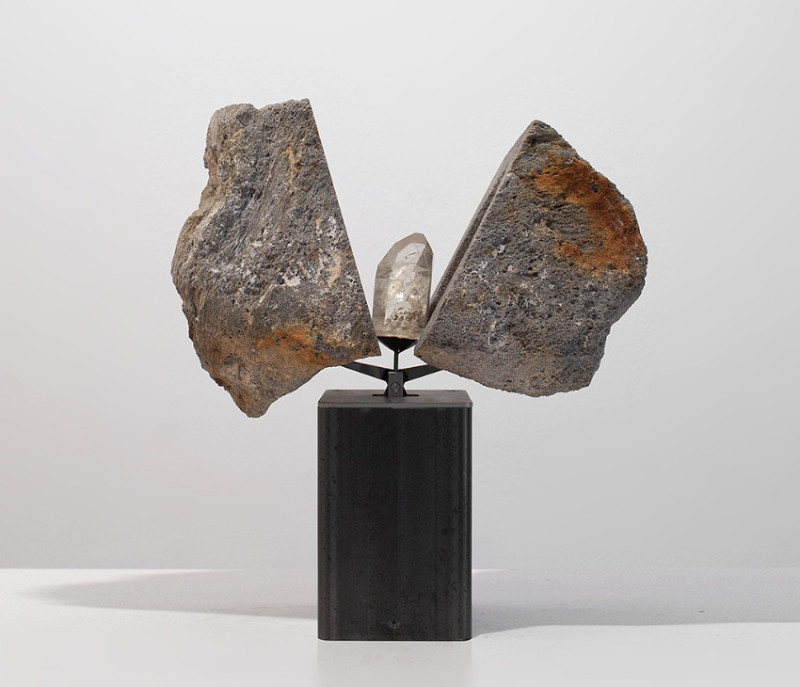 With powerful and dense materials such as azobed wood, Bernd Lohaus (1940-2010) comes to a combination of sober, massive, sculptural forms. Sometimes we see inscriptions written mainly with chalk which refers to the primary meaning of language vocabulary. The material thus acquires a contradictory meaning; this one, full of heaviness, is endowed by the enigmatic and personal inscription (in German) of a kind of abstract fragility. The most recent works of Bernd Lohaus however deprive themselves more and more of the presence of the language, the intuitive layout of the wood becomes on its own, a language.

Etienne-Martin (1913-1995) is one of the major French artists of the second half of the twentieth century. Young, he was marked by Gurjieff’s teaching and esoteric philosophies. He was also close to the writer Henri-Pierre Roché and attended the architects of the group Oppède led by Bernard Zerfuss. Then, Harald Szeemann – a passionate advocate, will make him one of the key artists of the section “Individual Mythologies” at Documenta V in Kassel in 1972. Etienne-Martin remains an artist to be discovered and rediscovered, who continues to resist the hasty attempts to lock him into an established aesthetic stream, who never ceases to amaze and enchant us with the inventiveness and vastness of his universe . While being of his time, but fundamentally free and independent, this unwanted dreamer of matter and form, practiced an art which was, in the end, Other and more than just sculpture.

Rebellious temperament, Rebecca Horn (1940) turns very early to art and philosophy. By molding her first figures in polyester, she contracted in 1967, a serious lung disease that became a founding experience. Locked up for more than a year in a sanatorium, she imagines sculptures related to the body. Through them, Rebecca Horn transforms into a fascinating creature, both male and female, human and animal, suprasensible. Then the bodies disappear in favor of animated or motorized sculptures, and for this exhibition we will present three important pieces including Stone Cloud of 1995 and Belle du vent of 2003.