Galerie Max Hetzler presents a solo exhibition by Raymond Hains, featuring works from his seminal matches series, at Bleibtreustraße 45 and in the Window Gallery at Goethestraße 2/3, Berlin. 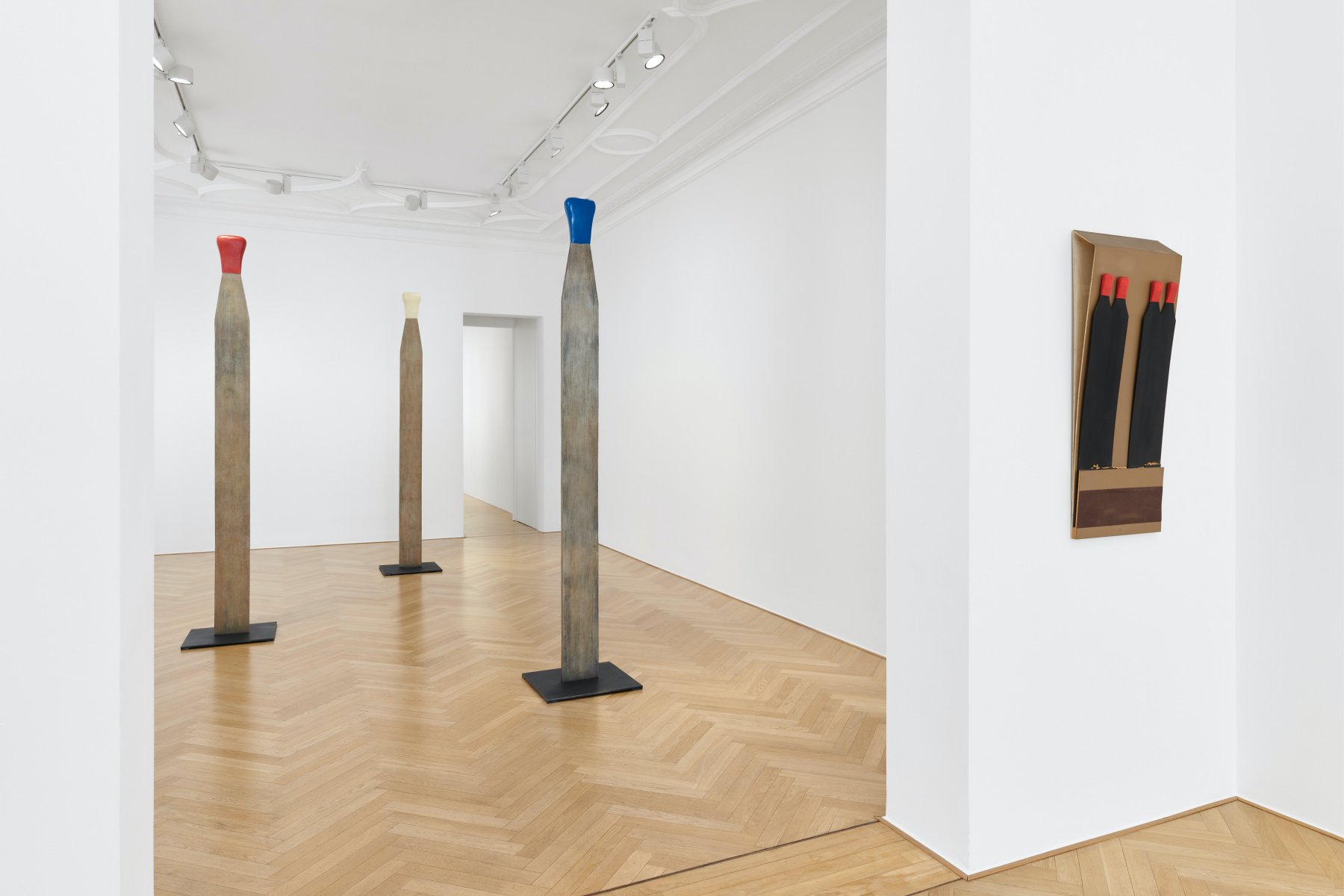 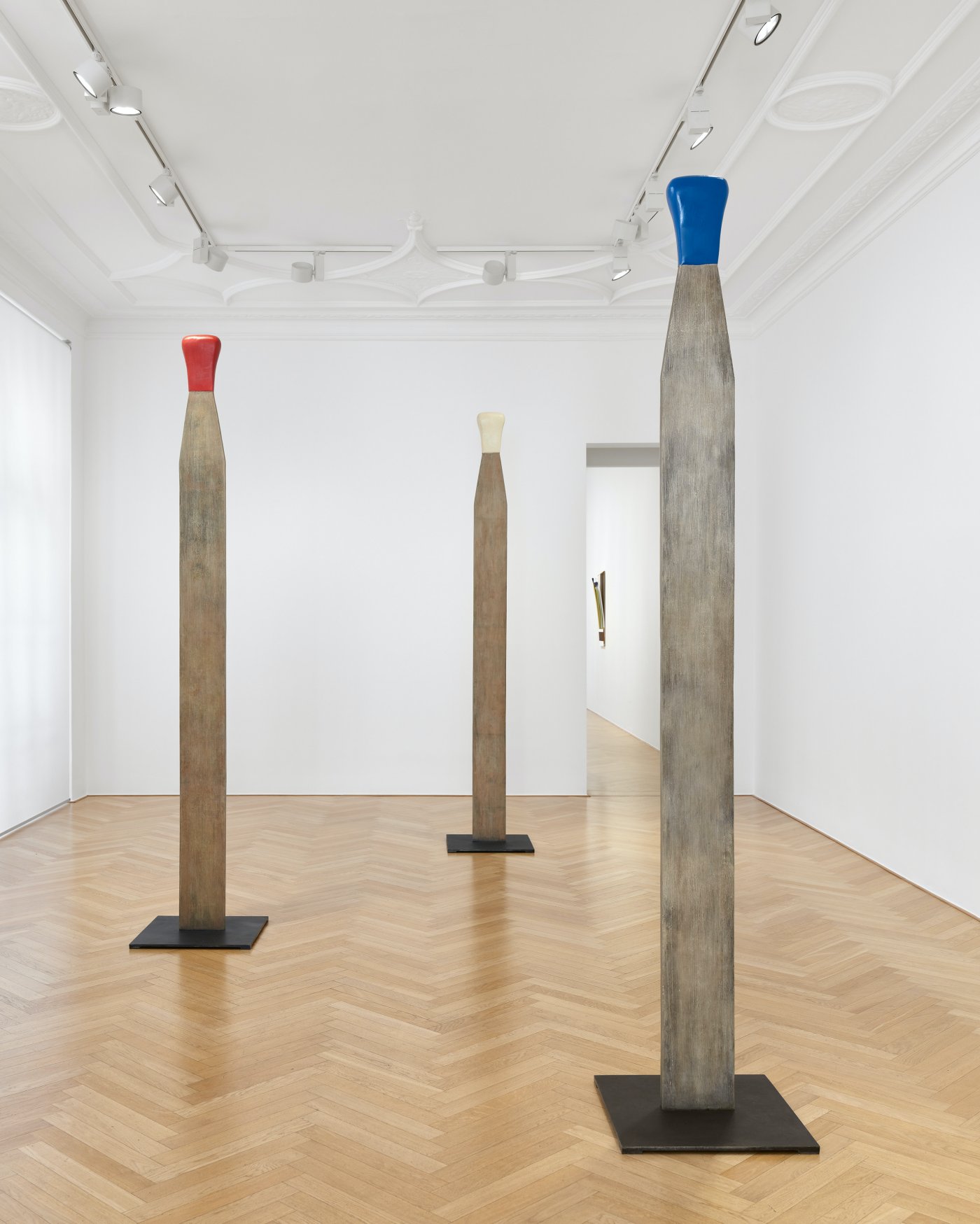 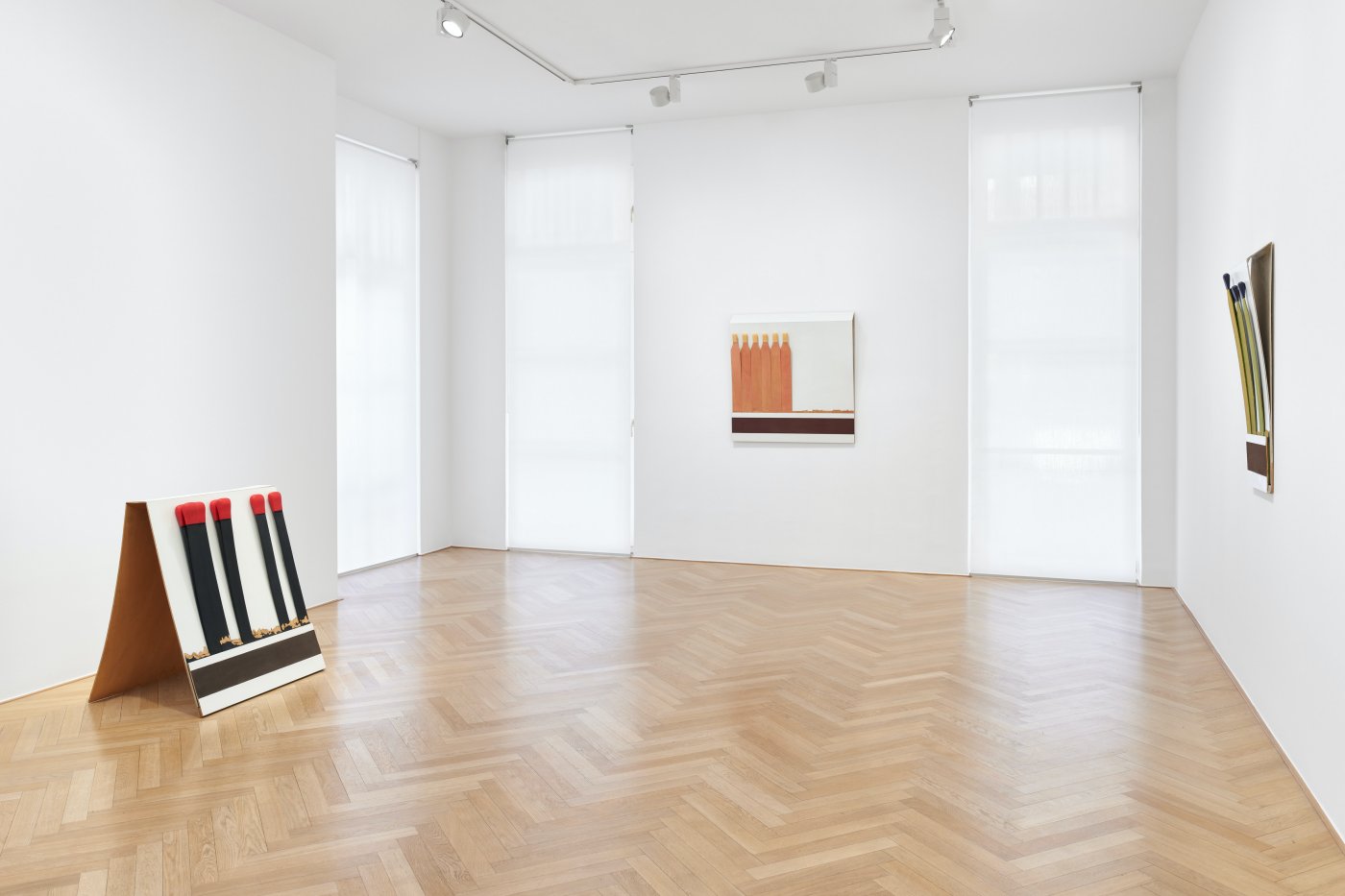 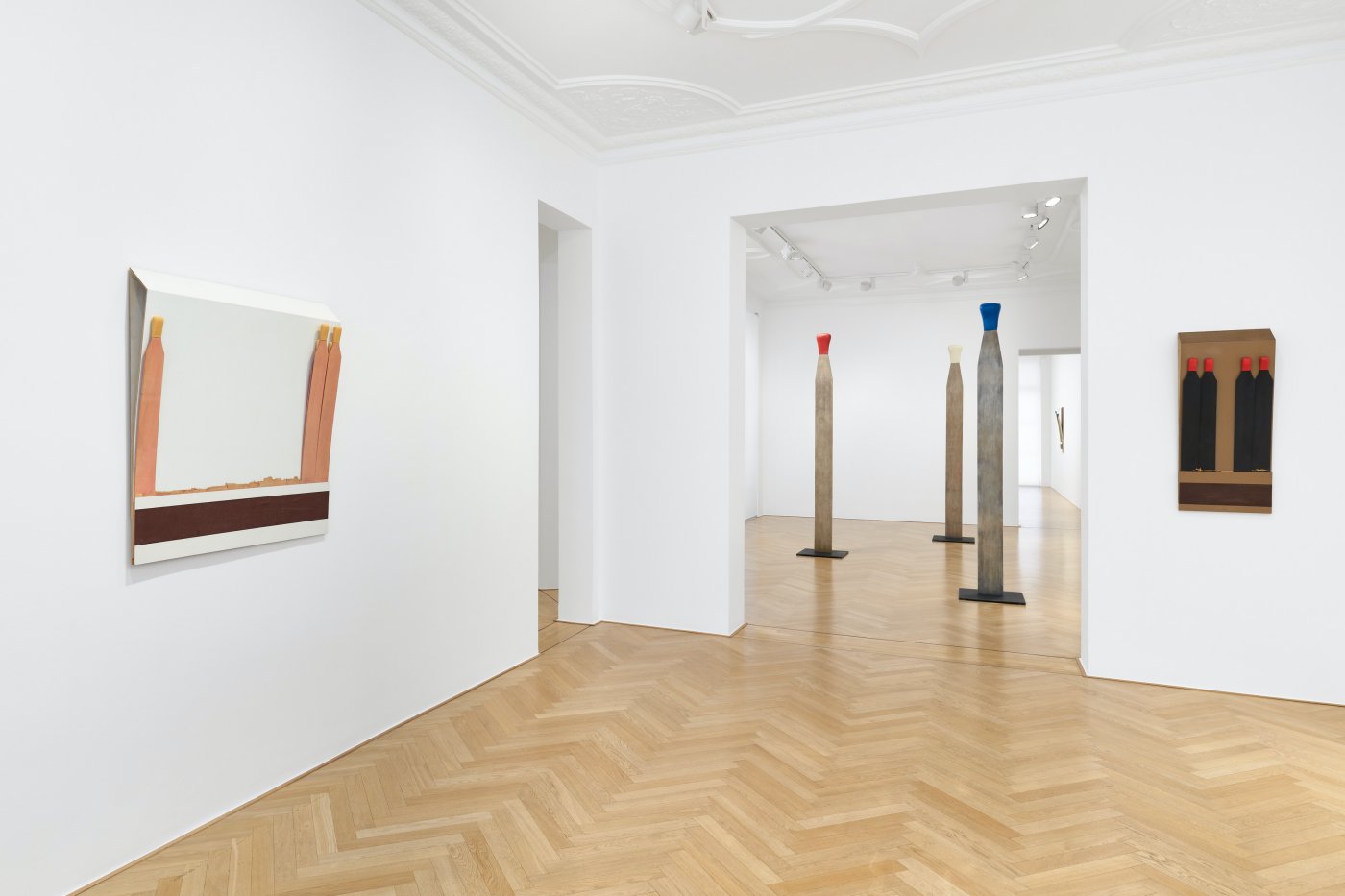 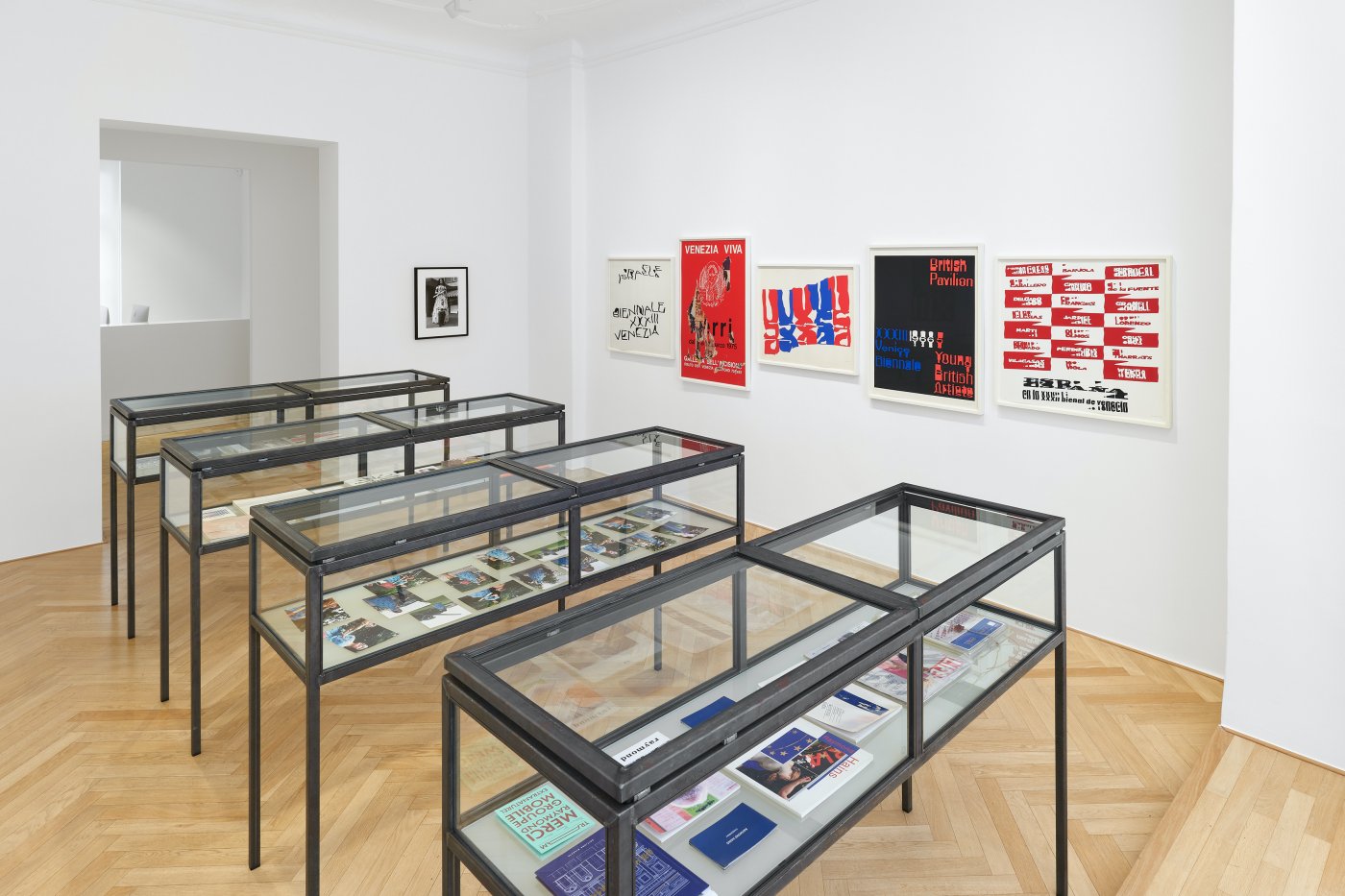 A central figure in post-war French art, Raymond Hains developed an artistic universe that playfully borrows from the real world and explores the visual and metaphoric possibilities of linguistic systems. Having primarily acquired a reputation during the late 1940s for his work with torn posters, the “affiches lacérées”, and later, “palissades”, Hains plays with verbal and visual associations, referring to historical moments and reflecting central elements of the emerging consumer culture of his time.

Together with Yves Klein, Jean Tinguely and Jacques Villeglé, Hains was a founding member of Nouveau Réalisme, the French counterpart to Pop Art established in 1960, which sought to reshape the relationship between art and life. Even though the group was short-lived and came into existence at an early stage in Hains’ career, the values of connecting the traditions of fine art with popular culture accompanied the artist throughout his life.

In the current exhibition at Galerie Max Hetzler, works from Hains’ matches series are on view. The artist initiated these in 1964, while residing in Italy, inspired by Claes Oldenburg’s work at the Venice Biennale that same year. Hains began the production of oversized matchbooks and matches, which were shown at Galleria del Leone in Venice for the first time in 1964. The works were conceived as both free-standing and wall-hanging objects, challenging traditional forms of sculpture and painting. Both types of matchbooks feature in the exhibition at Galerie Max Hetzler, with two free-standing and five mounted to the wall, alongside four giant matches in bronze. One of these monumental bronze sculptures is presented exclusively in the Window Gallery at Goethestraße 2/3 as part of the exhibition.

Hains attributed this body of work to two fictional artist characters, “Saffa” and “Seita”, whose names derive from acronyms of the major French and Italian tobacco and match companies at the time. He cultivated the myth of the two invented artists in numerous exhibitions, signing works in their name and presenting himself as their agent. By humorously assuming different roles and identities in the art world, Hains questioned the status of the artist and how it was being instrumentalised by society. His choice of trivial objects such as matchbooks, allowed him to monumentalise the everyday in artistic form. Critically exploring and incorporating consumer goods in his works, Hains turned the mundane into art.

Playing with the legacy of the ready-made “Seita” and “Saffa” oscillate between humour and seriousness, familiarity and aesthetic tradition.

A set of eight original silkscreen prints from the series La biennale éclatée (1976) are also on view, alongside vitrines with publications and ephemera on the artist.

The work of Raymond Hains (1926 – 2005) has been included in major international exhibitions such as “The Art of Assemblage” at MoMA, New York (1961); “Paris-Paris” at Musée National d’Art Moderne, Centre Pompidou, Paris (1982); documenta IV, Kassel (1968) and documenta X, Kassel (1997). More recently a large room was dedicated to the artist’s work at “Vive Arte Viva”, the 57th Venice Biennale (2017), and a large-scale torn poster work from the “Dauphin” series was exhibited at the Fondation Louis Vuitton, Paris, in the exhibition “The Collection of the Fondation. A Vision for Painting” (2019). Between 2000 and 2002, retrospective exhibitions took place at Centre Pompidou, Paris; MACBA, Barcelona; Foundation Serralves, Porto and Moore College of Art, Philadelphia. Other solo exhibitions of Hains’ work include MAMCO, Geneva (2015); Les Abattoirs, Toulouse (2002); MAMAC, Nice (2000); Musée d’art Moderne, Saint-Etienne (2000); MUMOK, Vienna (1995) and Fondation Cartier, Paris (1994).