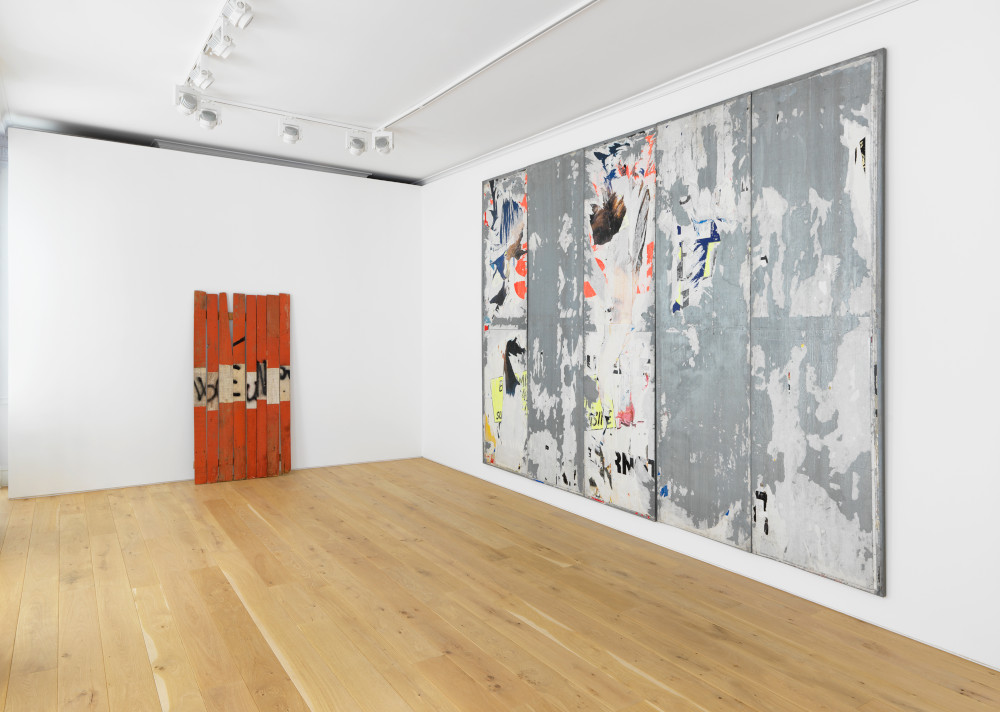 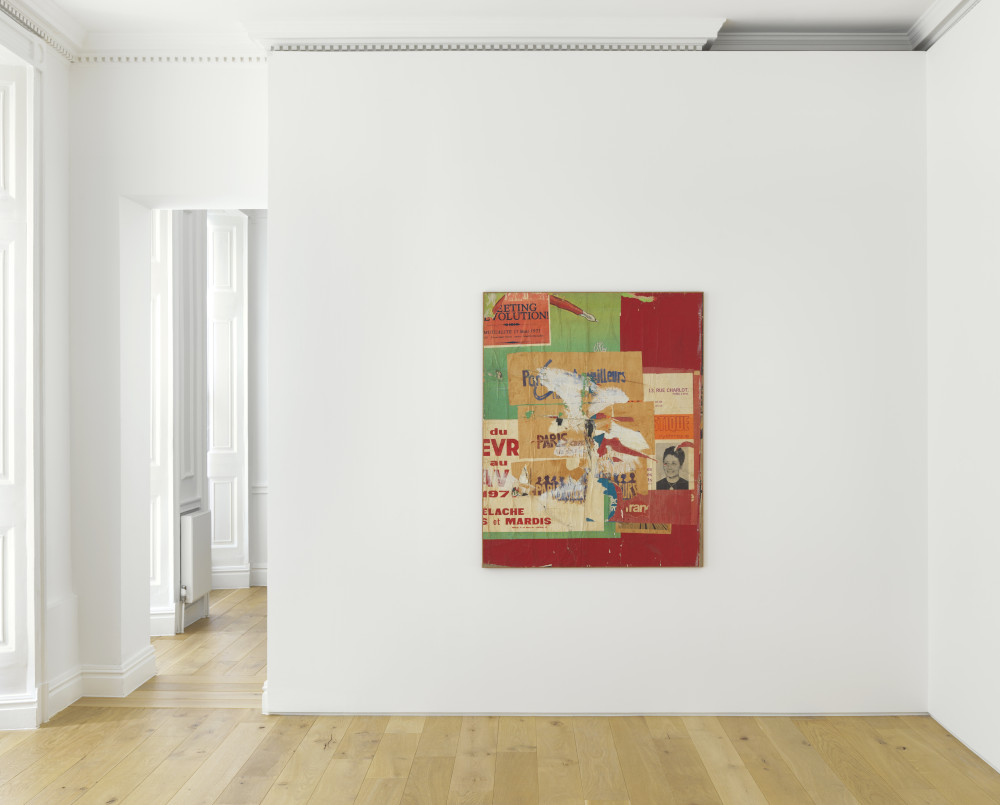 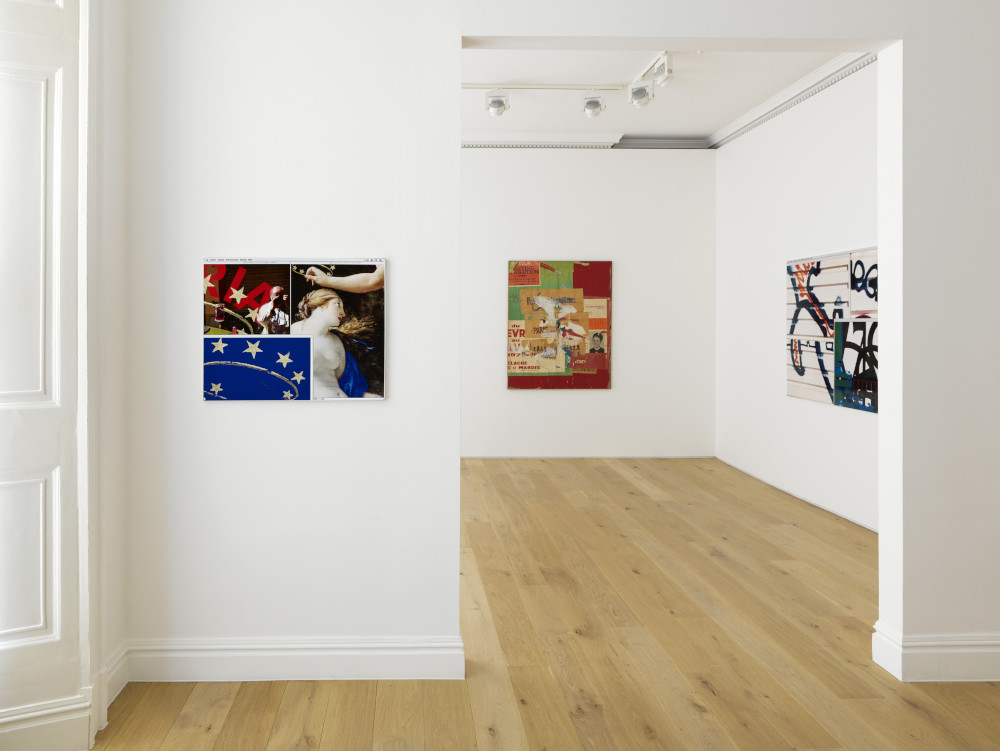 Widely regarded as one of the most important and challenging post-war French artists, Raymond Hains (1926 – 2005) is often associated with Nouveau Réalisme, as well as Lettrisme and Situationnisme. He is principally known for his avant-garde torn poster works, begun in 1949 with Jacques Villeglé.

Art historian Benjamin Buchloh has pointed out that competition with painting was somewhat inevitable in the mid twentieth-century, at the time Hains started his artistic career. Indeed notions recently developed by the New York School, such as ‘all-over’, gesture and abstract expressionism can arguably also be seen in the torn poster works, parodied by Hains’ deferral to the city’s ‘collective consciousness’, the destructive tearing actions of passers-by. Collected from the street, these ‘décollages’ of found advertisements, event signs and political messages, were chosen for their bold colours and fragments of images or phrases. Infinite Conversations shows examples of both ‘affiches lacérées’ where the poster fragments were carefully extracted and relaid onto canvas or paper, and the later ‘tôles’ in which Hains extracted all or part of the original galvanised steel backing. Included in the exhibition is a large-scale torn poster work from the Dauphin series on its original metal placard. Realised in 1990, the title is derived from the French company that manufactured the billboards. Measuring 300 x 400 cm, the standard dimensions for advertising boards of the time and also the size of fifties abstract expressionist paintings.

During the late 1950s Hains became interested in the symbolic function of construction-site barriers: objects which concealed and detracted from the environment beyond them, whilst simultaneously pointing out where one’s attention should lie. As with the torn posters, the objects were pre-existing, altered and authored by the destruction and graffiti of anonymous passers-by. Two distinct examples of palissades are included in the exhibition. Hanging on the wall like a painting, the smaller Palissade de Beaubourg, 1976, is a portion of fencing selected from the slats surrounding the Centre Pompidou’s building site, its prominence of pattern an ironic nod to the bold striped abstraction of painters working at the time. In contrast, the wooden Untitled (Palissade), 1974, stands on the floor, recalling its original use, blurring the boundaries between sculpture, object and painting. Drawn once more to linguistic play and coincidence, the artist made a wry connection between ‘la palissade’ [the barrier, fence] and the phrase ‘lapalissade’, meaning a comical obvious truth or tautology.

Begun in 1998, the macintoshages are collages of digital images arranged using playful associations on a Mackintosh computer screen. Combining references drawn from the artist’s meticulously collected personal archive, a screenshot was made of the results and printed onto aluminium. Language clues appear in the form of file names, encouraging the viewer to map connections between the juxtaposed elements. The flatness of these printed works contrasts with the dimensional quality of the images within them, from textured tapestries and paintings, to graffitied street surfaces. In their exploration of how we interact with visual resources in a digitised society, the macintoshages demonstrate Hains’ prescience and his ongoing relevance to a subsequent generation of artists. Throughout Raymond Hains: Infinite Conversations, the artist’s fascination with the density of the visual world is highlighted through the various layers embedded in the works, from the continually overlaid poster fragments, to the overlapping and infinitely connected images in the macintoshages.

In 2017, a large room in the Central Pavilion of the 57th Venice Biennale Vive Arte Viva was devoted to Hains’ work and was listed as a leading highlight of the biennale. Torn poster works by Hains were exhibited alongside works by Gerhard Richer and Joseph Beuys, among others, in an exhibition curated by British artist Tacita Dean in 2005. An Aside: Selected by Tacita Dean was organised by the Hayward Gallery in collaboration with Camden Arts Centre, and subsequently toured to the Fruitmarket Gallery, Edinburgh and Swansea Festival of Music and the Arts. A large-scale torn poster work from the ‘Dauphin’ series is currently on view at the Fondation Louis Vuitton, Paris, in the exhibition The Collection of the Fondation. A Vision for Painting, until 26 August 2019.