Raffi Kalenderian: Across the way moved in a pair / With passion in its prime / Maybe they look through to us / And hope that's them in time

Raffi Kalenderian: Across the way moved in a pair / With passion in its prime / Maybe they look through to us / And hope that's them in time

Galerie Peter Kilchmann presents the sixth solo exhibition by Raffi Kalenderian (*1981 in Los Angeles, where he has lived and worked ever since) at the gallery. 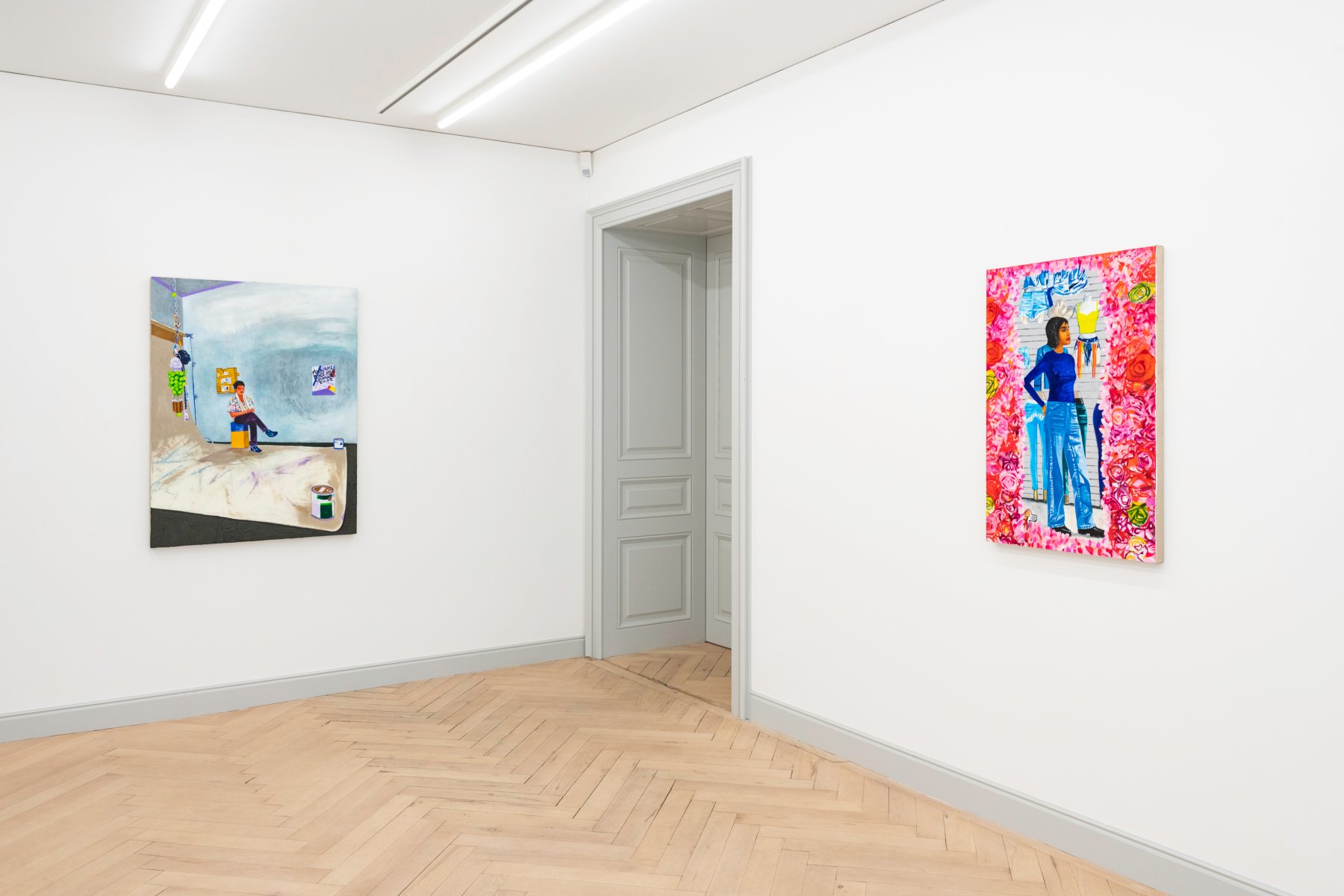 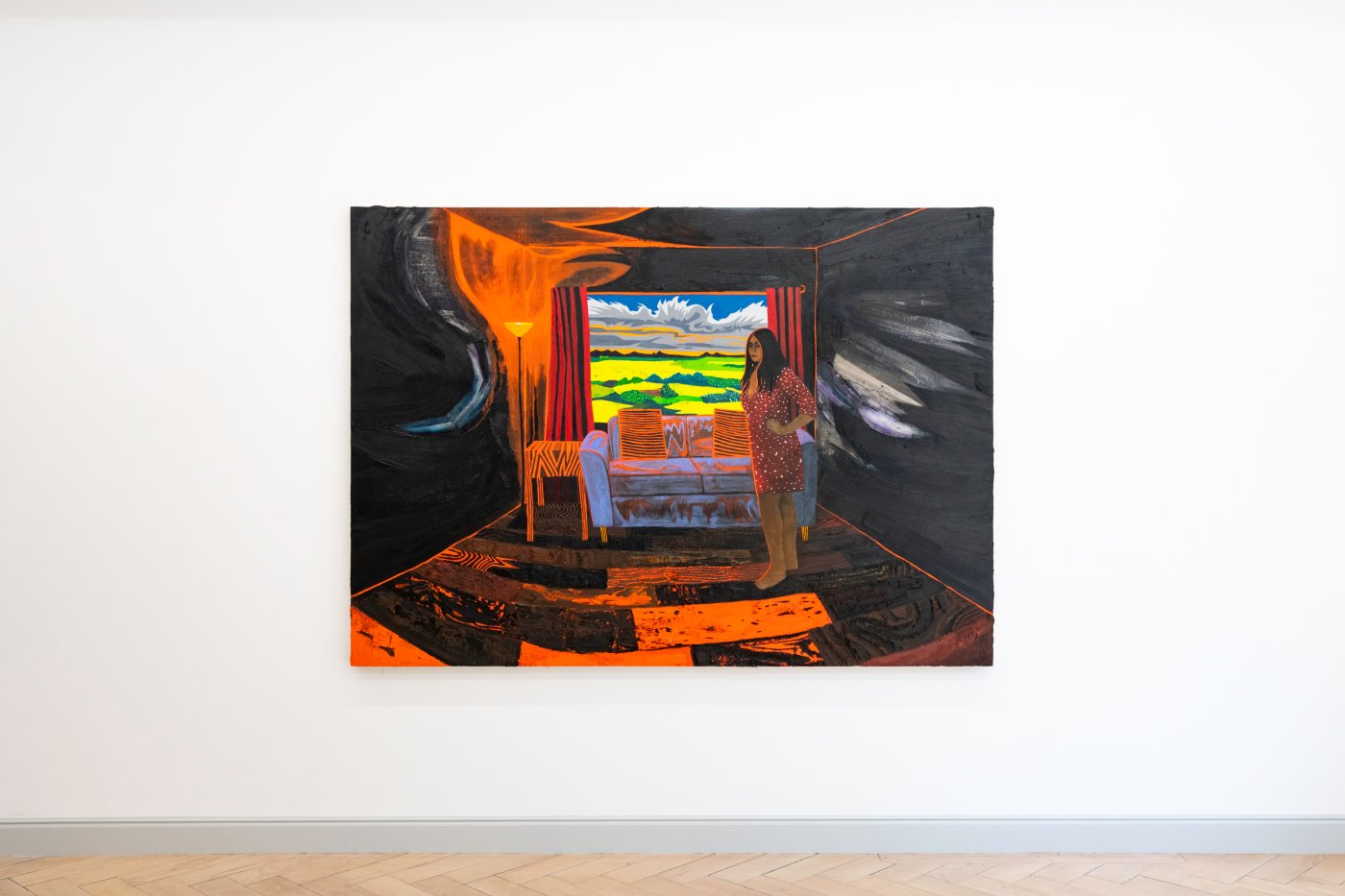 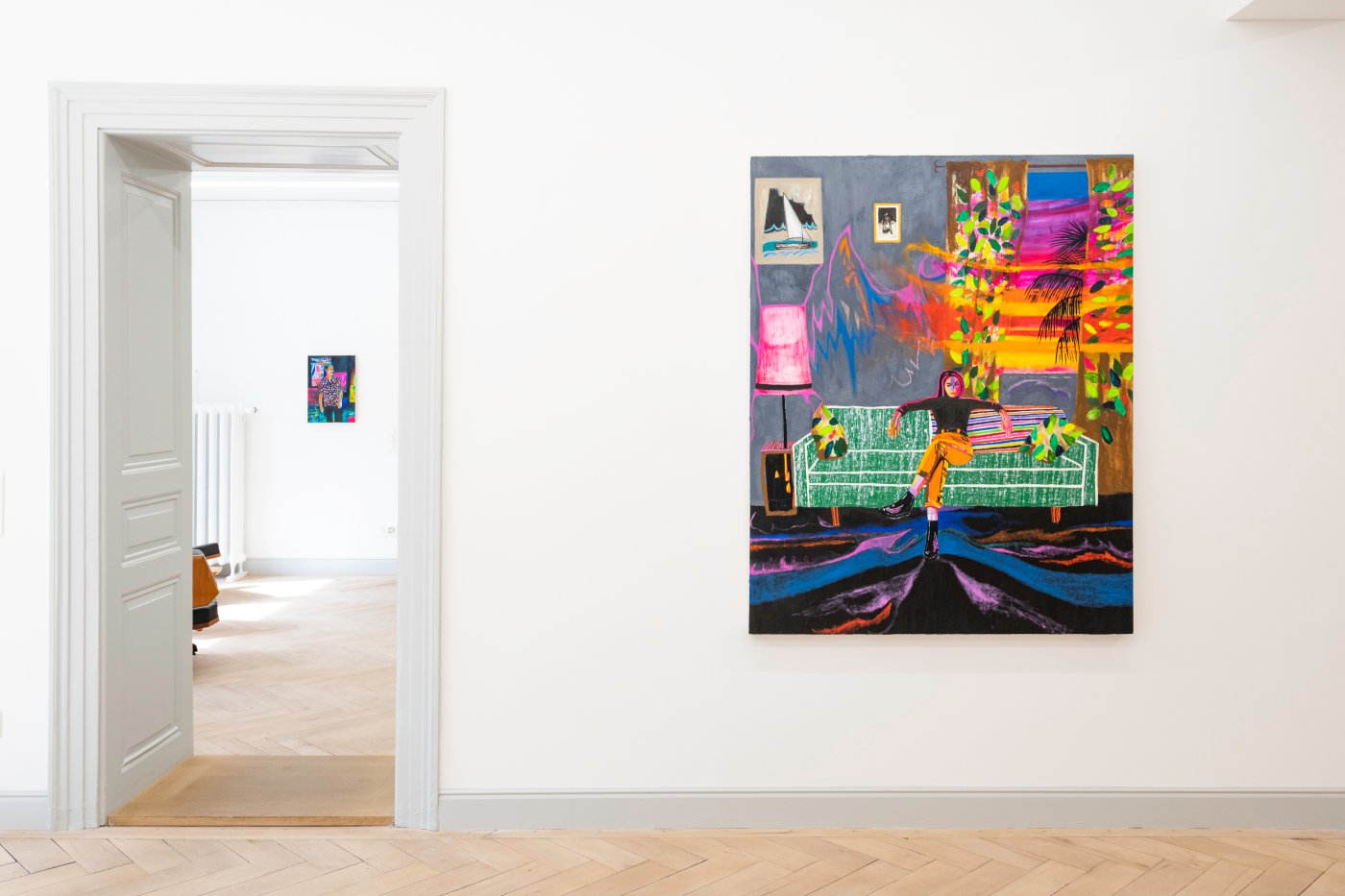 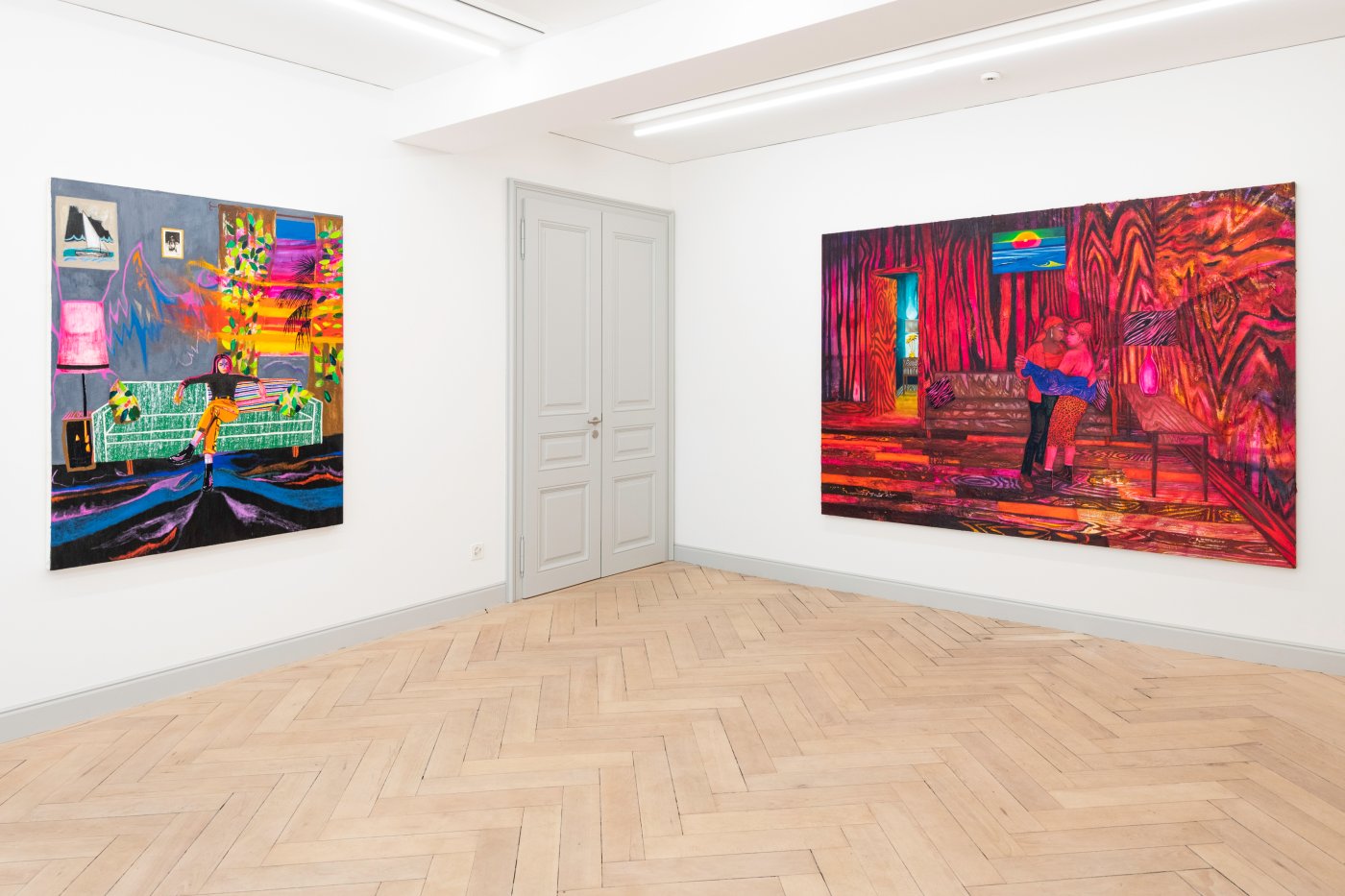 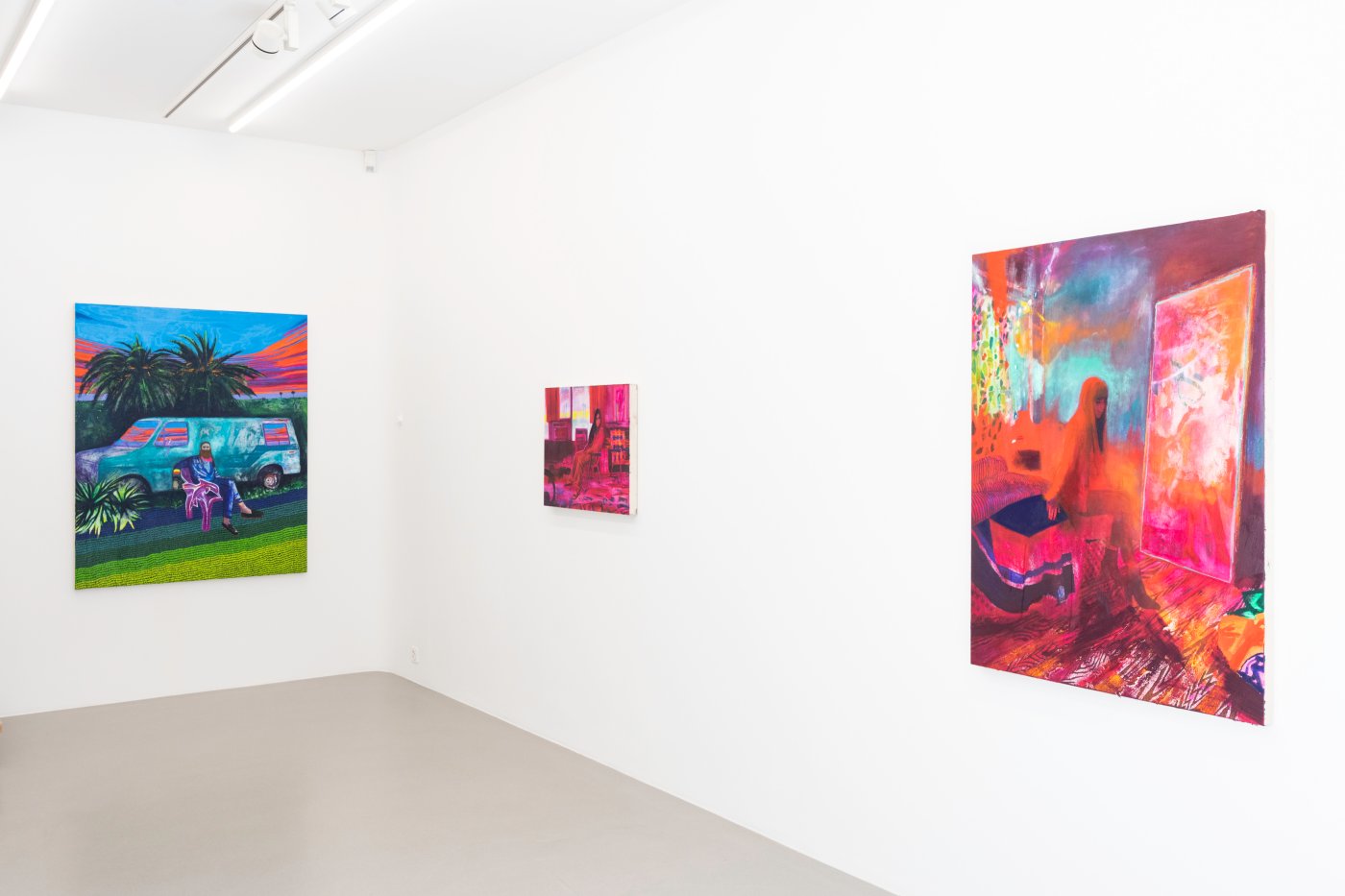 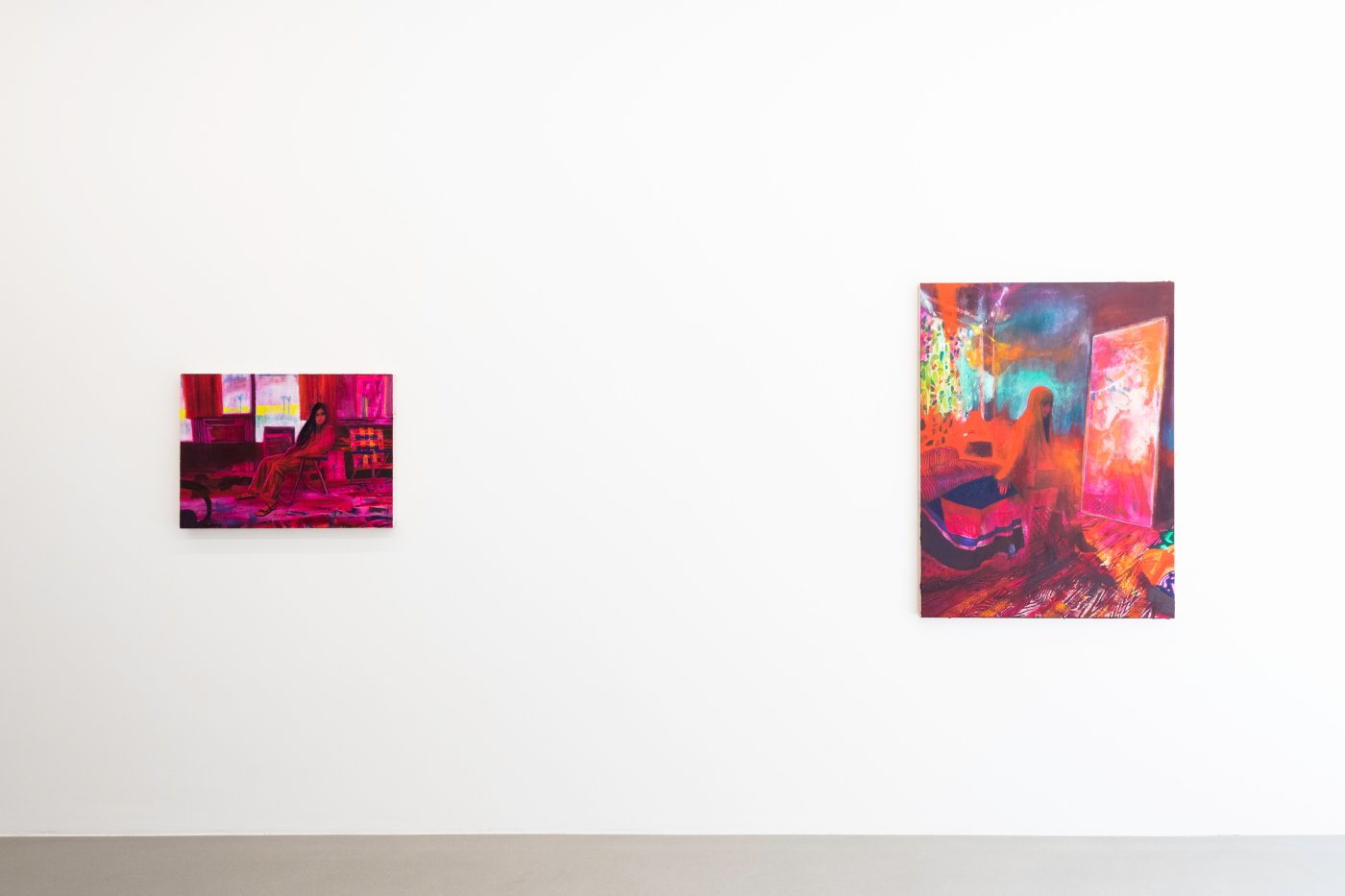 In his paintings, Kalenderian draws on the strong attraction of light and colour and the intimate moment between model and artist that is so particular to the medium of portraiture. In his new group of works, he focuses his attention on the perspective of the viewer and plays with the unbiased curiosity about the stories portraits can tell in the context of time and space. On display are new paintings in oil on canvas and linen in various formats.

Kalenderian’s paintings radiate one thing in particular: the artist’s great enthusiasm, with which he turns every inconspicuous corner in an interior, every fold in a colourful curtain, sofa cushion or piece of clothing into an essential detail of his composition. The loud presence of angular patterns, impasto layers of colour and intense hues has become his trademark in recent years. Often, as in the central work of the exhibition The Visit (After Vallotton), 2021-2022, (178 x 249 cm), the fierceness of colour stands in stark contrast to the careful attention to detail with which he portrays his protagonists and their surroundings. With the same poetry of a songwriter, Kalenderian weaves the very personal encounters with his models, with most of whom he has friendly, family or professional ties, into the narratives of his paintings.

For Kalenderian’s new group of works, the song The Couple across the Way by the Dublin-based post- punk band Fontaines D.C. was a particular source of inspiration. For the title of the exhibition, he took a central verse from the song. Sung in a traditional Irish manner, the song tells the perspective of an older couple who, faced with a younger couple who have moved into the flat opposite, reflect on how their own relationship has changed over the years. The song makes Kalenderian think about 19th century portraits and the artists who created them. About what life was like for these artists and their models, what their world was like at the time, their style, their food, the deprivations, how their parties went, their travels, etc.

These thoughts gave rise to the work The Visit (After Vallotton), which is based on Félix Vallotton’s painting of the same name from 1899 in the collection of Kunsthaus Zürich. The original shows a bourgeois furnished living room. A woman and a man in elegant wardrobe of the late 19th century gently greet each other in a private moment of tender affection. A slightly open door in the left background suggests the intimacy of the nearby bedroom. Kalenderian adopts the subtle arrangement and translates it into his contemporary pictorial language. In his case it is a female couple, Ani and Jadra, whose acquaintance the artist had made in a bar. At first glance, it appears as if they are dancing or embracing. But on closer inspection it looks more complicated, as if they are unsettled by the intensity of the moment. Warm reds and purples overlay the scene like a filter, allowing the reduced furnishings of the interior to merge with the objects and shapes of the surroundings. The woodgrain of the walls and floorboards vividly demonstrate Kalenderian’s love for pattern and texture, as the impasto layers of paint are haptically applied with both brush and palette knife. The interplay of thickly painted, gestural techniques, along with the atmospheric glazing and phantasmagoric colour, imbue the painting with the psychology and emotion of the moment.

Individual details, such as the playful ornaments of the floor, run through the works in the exhibition like a signature of the artist. For example, in the painting Jess, Kalenderian’s lawyer/ goth DJ friend sits thoughtfully in the artist’s bedroom. The entirety of the room, including the familiar plant-themed curtains, striped bed sheets, and scattered clothes on the woodgrained floor are all colorfully illuminated, all the while a mirror reflects Jess, whose slightly melancholic disposition is contrasted by the wildly vibrant of the densely-patterned living space. Similarly, in the portrait Taylor, 2022 (91.5 x 61 cm) the artist’s cousin sits on the wooden staircase of an unfinished house still in the early stages of construction. Her gaze remains self-possessed and slightly amused, while the architecture of the staircase takes on a dynamism of its own, drawing the viewer into the depths of the painting with a shimmering pattern of warm browns and ochres.

The curving colour patterns on the unplastered wall and the flowing stripes of colour on the dark floor in Alyssa, 2022, (152.5 x 122 cm) give a subtle hint of the real setting in the artist’s living room. The same, plant-themed curtains are now absorbed by the hues of a riotous sunset, as the lively colours from the tropical-themed exterior begin to merge with the hot pink radiating from the mid-century lamp inside. As a painting and drawing from the artist’s personal collection are hung high above, the contrasting layering of the strong areas of colour from both the lamp and sunset are in vivid contrast to the serene disposition of the female model, whose relaxed and sly expression defy the pyrotechnics of her surroundings. In Isis (Spiritual Pink), 2022 (91.5 x 61 cm), a young woman poses in a clothing store in Downtown Los Angeles. Distressed cut-off jean shorts and neon tops are dispalyed behind her as she is reflected in a mirror covered with flowers. The composition exists in a painted reality, where the rich pink roses provide a surreal framing of someone lost in dreamy thought.

Against the backdrop of the Fontaines D.C. song and the portraits of the 19th century, the new series of works is also a reflection by the artist on his own artistic work. What would Vallotton think of his painting being adapted by an artist in 2022 and transposed into contemporary California? At the same time, Kalenderian brings to mind later generations who may look at his work in the future and ask the same questions that run through our minds when we look at older paintings: “Look how insane people used to dress!”.

Kalenderian graduated from the University of California at Los Angeles (UCLA) in 2004 with a degree in Fine Arts. Since then, his work has been exhibited in many international solo and group exhibitions in the US and Europe, including Kunstmuseum St. Gallen; University Art Museum, Long Beach; Santa Barbara Museum of Art; Nassima Landau Foundation; Tel Aviv; McEvoy Foundation for the Arts, San Francisco; Saatchi Gallery, London; at Susanne Vielmetter, Los Angeles; Miles McEnery Gallery, New York, and many others. His works are in the collections of the Georgia Museum of Art, Athens (US); Los Angeles County Museum of Art; Minneapolis Institute of Art; Pinacoteca Giovanni e Marella Agnelli, Turin; and Santa Barbara Museum of Art, among others. In 2021, for the portrait gallery of the Bavarian State Opera in Munich, Kalenderian portrayed the Austrian theater and opera director Nikolaus Bachler, who led the State Opera as artistic director from 2008 – 2021. The work is exhibited in the stalls of the opera.