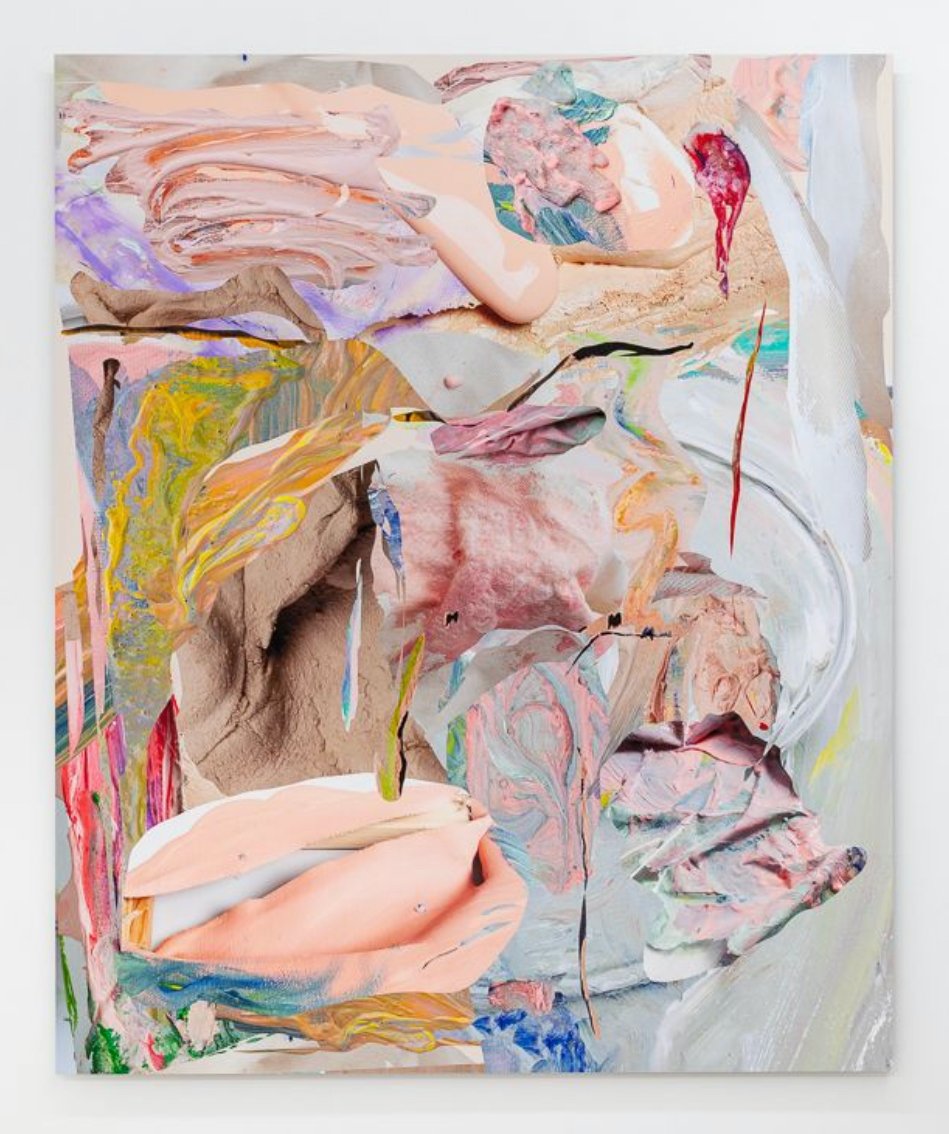 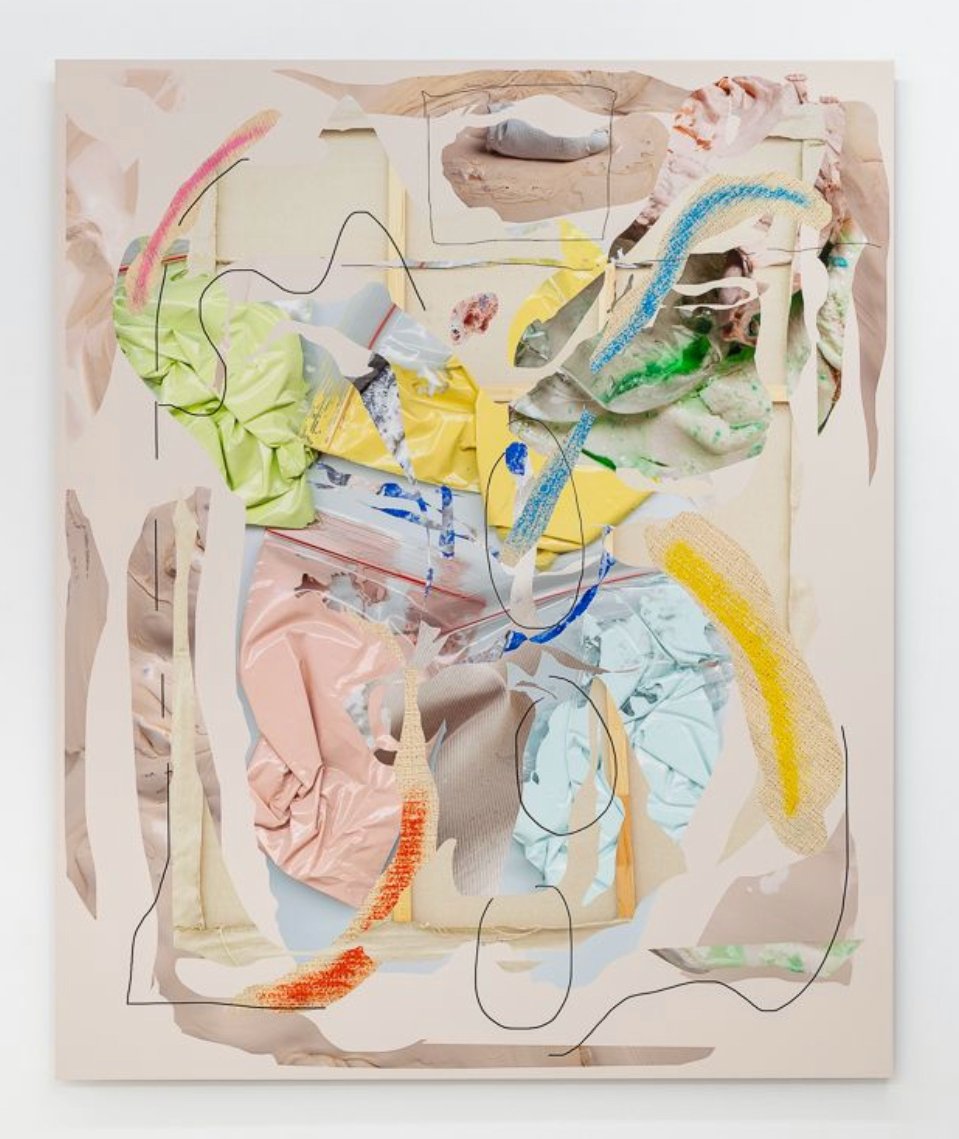 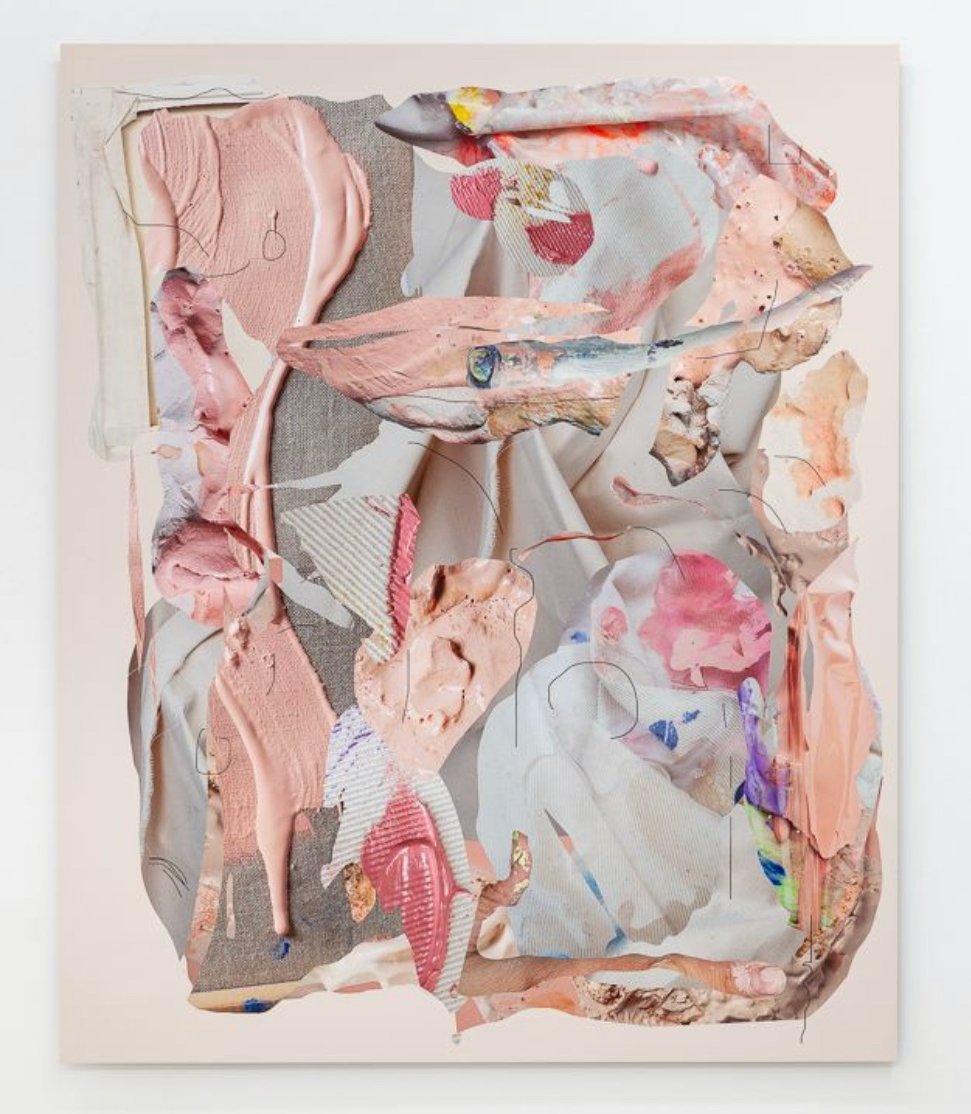 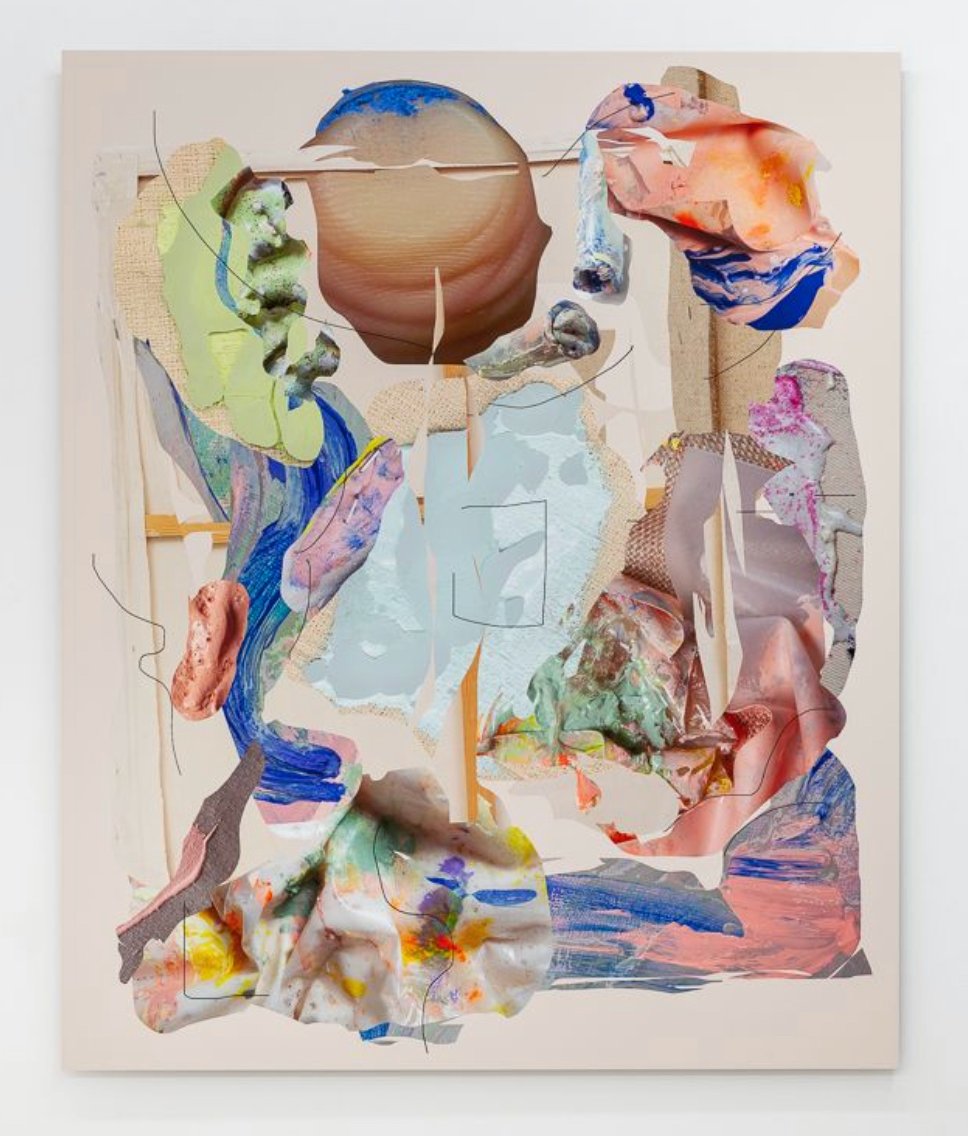 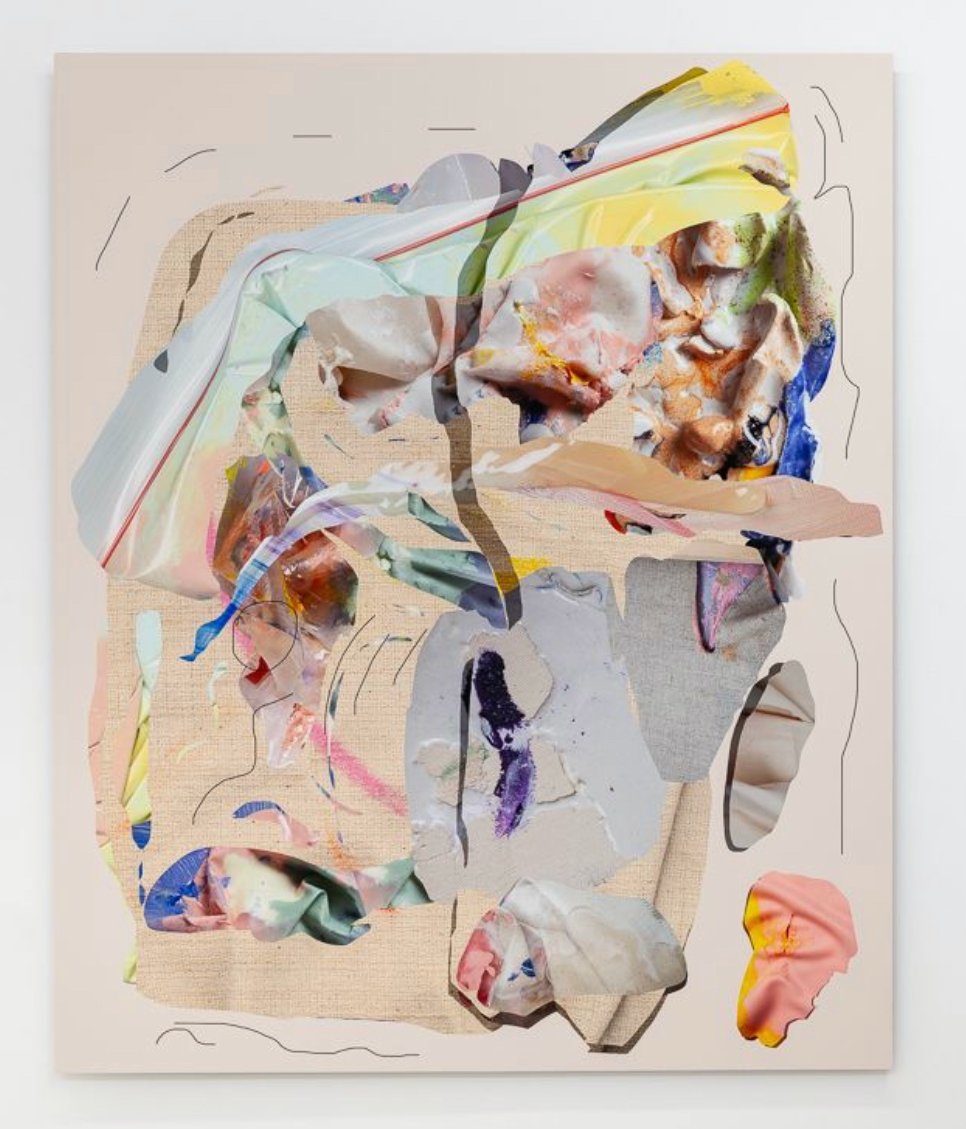 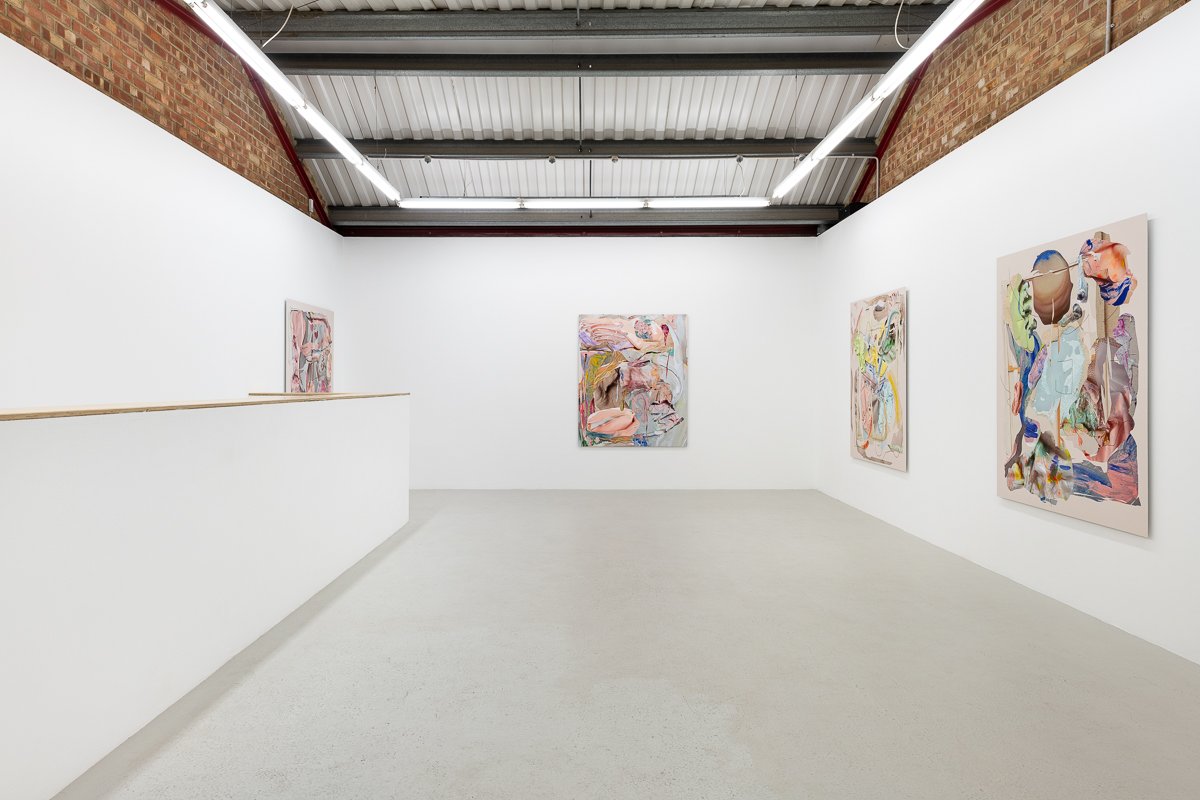 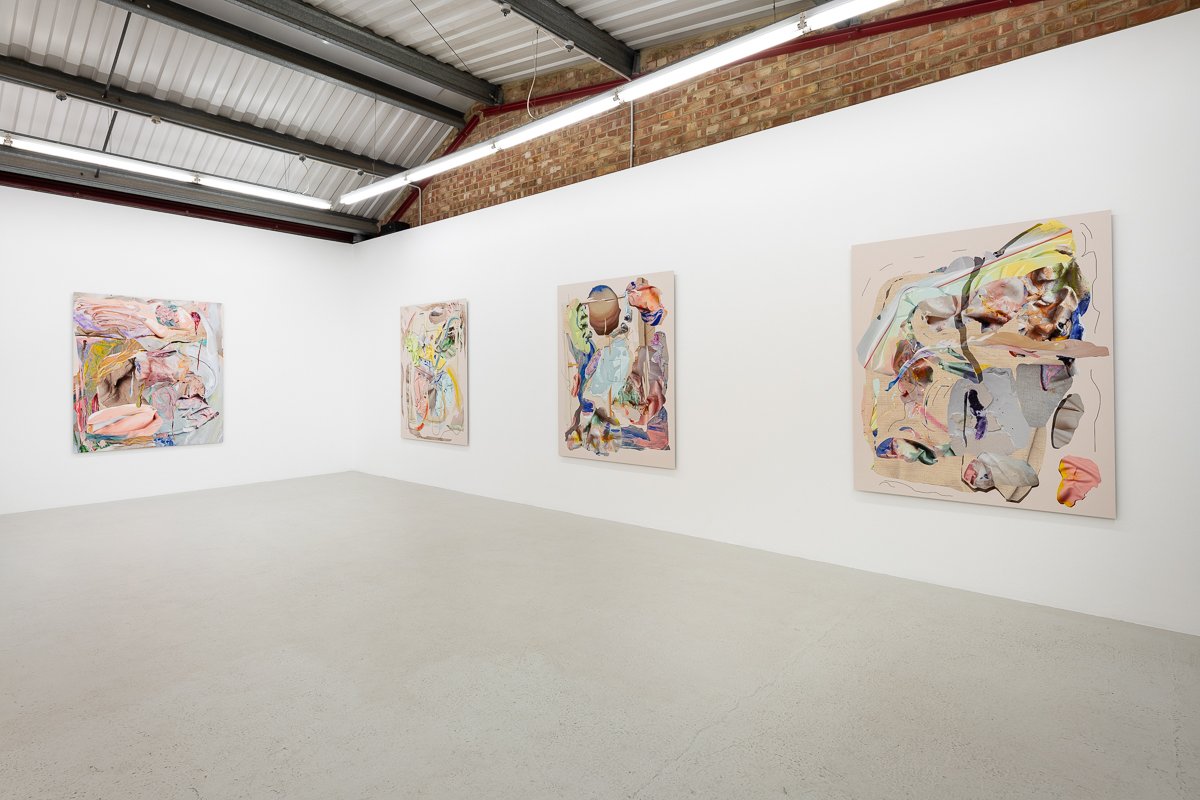 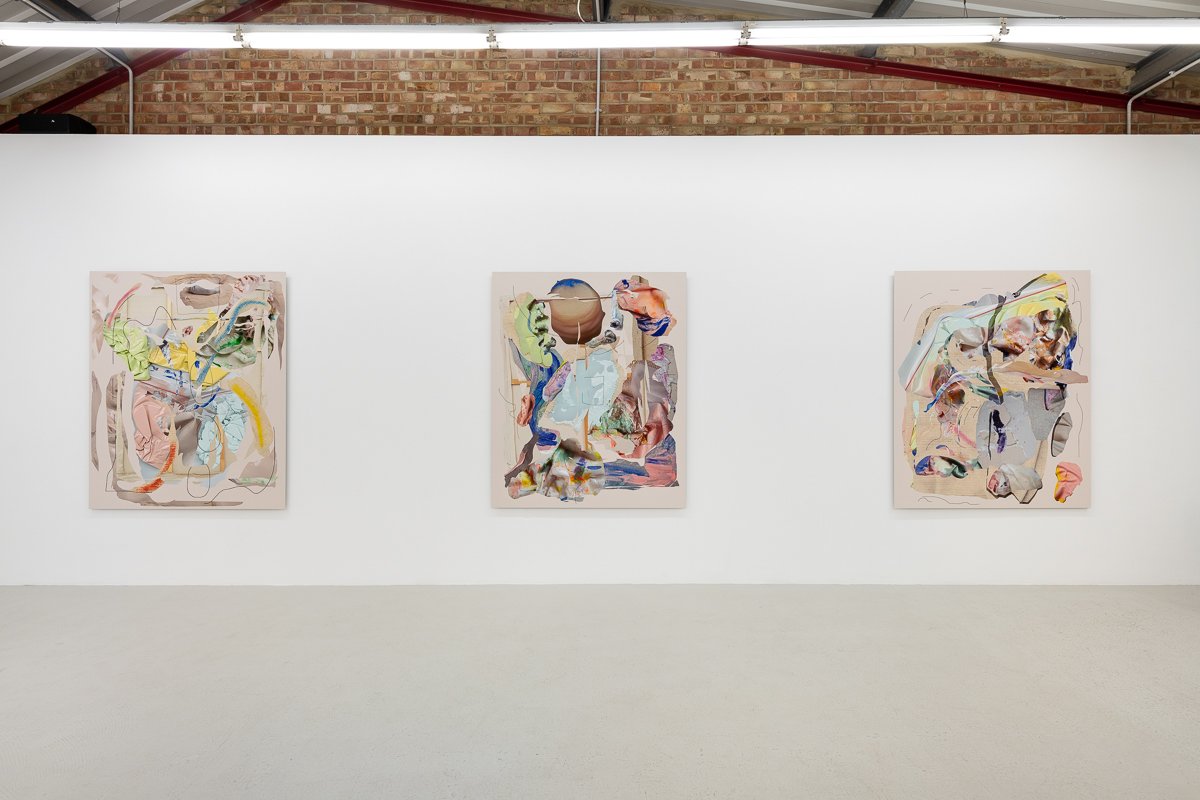 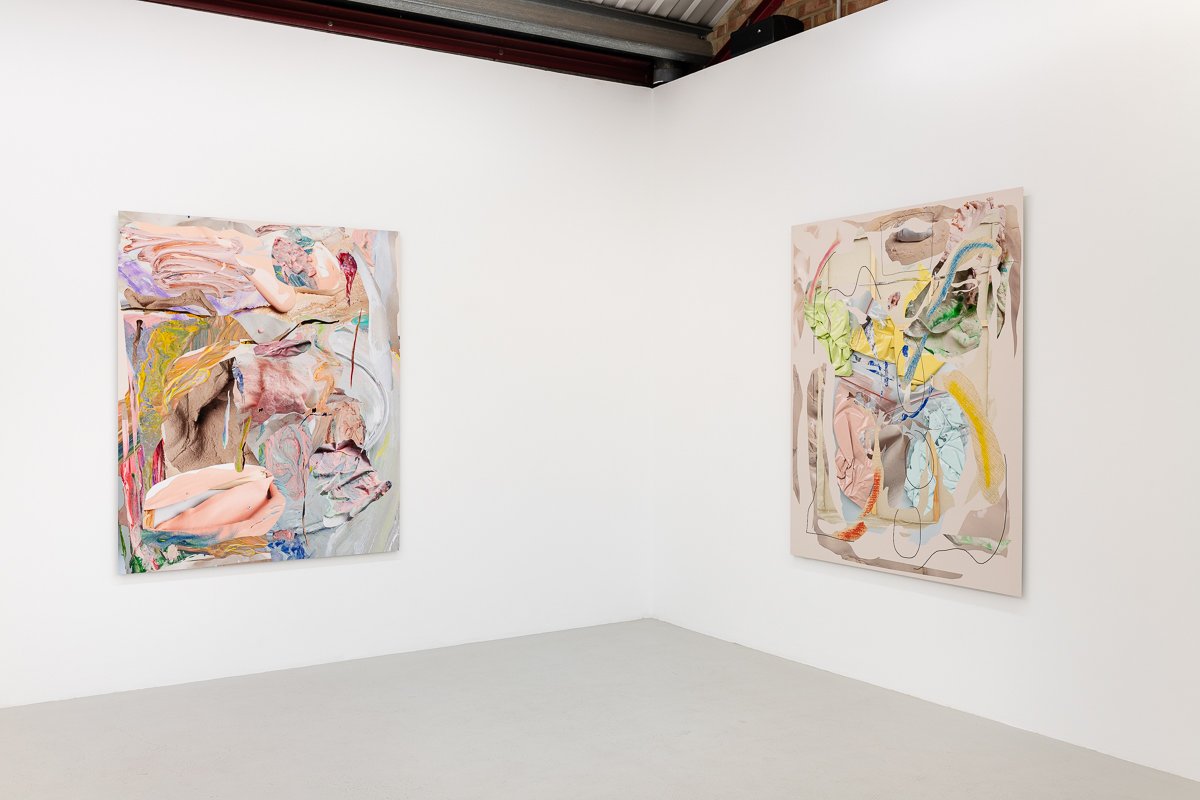 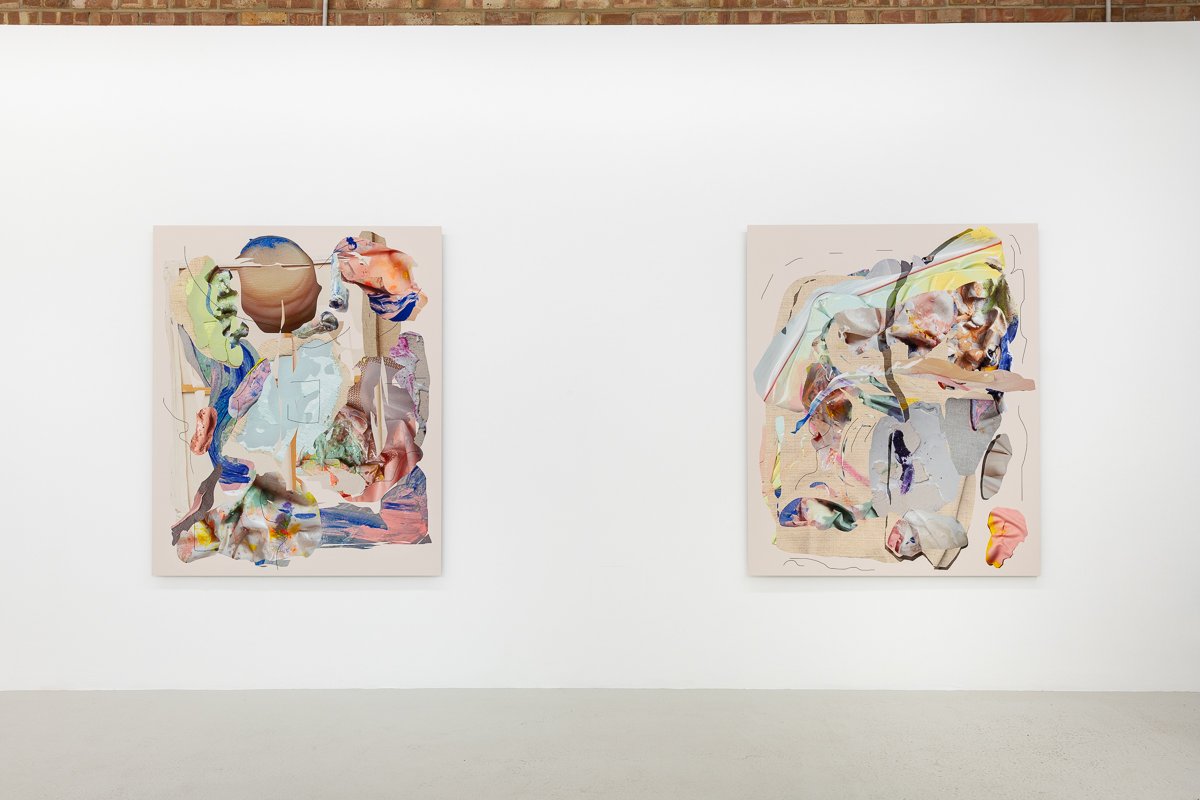 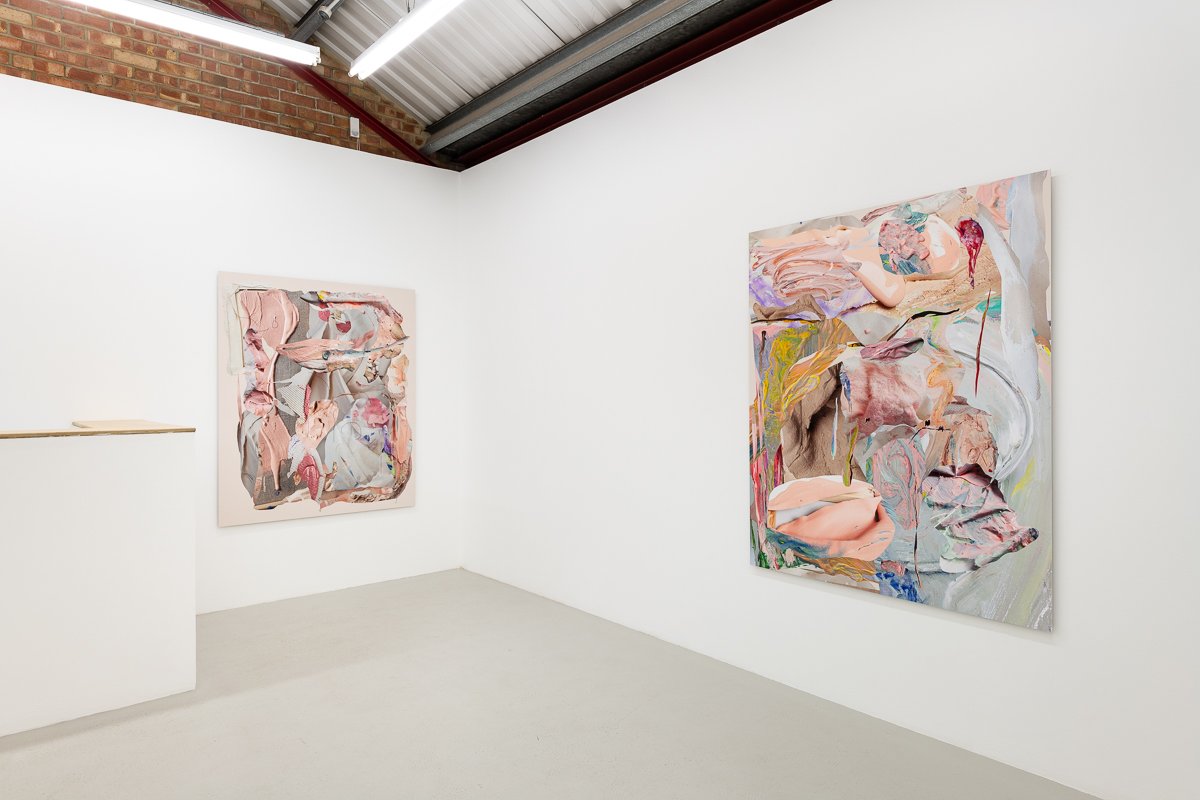 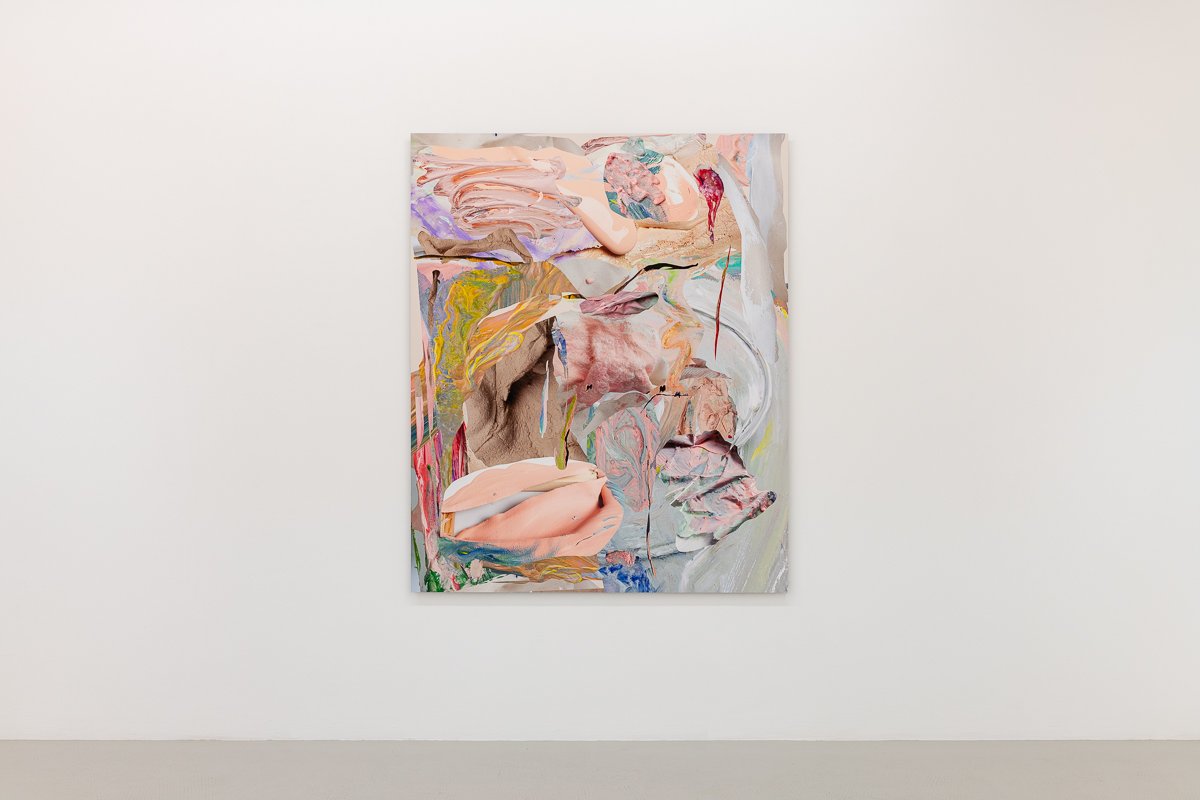 De Joode describes the central focus of her practice as the space between the physical and the virtual worlds, exploring the relationship between the three dimensional object and its two dimensional representation. Her work encapsulates a constant play between surface, meaning and materiality, disrupting the entanglement between these different plateaus in order to regain simplicity.

De Joode’s focus upon the play between the physical and the virtual is evident in the process she uses to create her Sloppy Therapy works. Beginning with a canvas, often a found canvas, de Joode deliberately tries to forget everything she knows about the canvas per se and instead seeks to explore the canvas as a simple object to be appreciated for its materiality. This lends her practice a phenomenological dimension – simultaneously grounded in physical directness and philosophical distance. As de Joode herself notes “I’m interested in seeing the world from a completely detached perspective.” The canvas is manipulated in a heavily tactile manner: paint is dripped or poured, the canvas itself may be cut, resin, glue or plastic is moulded by hand, glossy layers of pigment are built up – a manner reminiscent of the pioneering techniques of the American abstract expressionist Helen Frankenthaler, who used thin paints and unprimed absorbent canvas to fuse colour and cloth, suggesting space through variations in the density of paint and overlaps of form. Both share a naivety that seeks to activate the canvas with a view to enhancing and delighting in its three-dimensional materiality (and in de Joode’s case, perhaps with a nod to the series’ title, Sloppy Therapy, she reveals her enthusiasm for so working with canvas).

The final stage in de Joode’s process is to draw from the artist’s archive of images and compose (or arguably recompose) the work digitally using the aid of computer software. In this phase the artist is intuitively drawn to certain images, particularly those with shadows, marks or reflections that become evident only when ‘zoomed’ in or zoomed out on, using her selections as traces to create a palette from which she can digitally ‘paint’ her compositions. And due to the close-up, cropped and abstracted nature of the revised images that compose the finished works in Soft, the works appear deceptively textured such that the viewer is drawn to their apparent materiality in a tactile way, notwithstanding their super-flat nature being printed onto aluminium. De Joode describes the emotional impact of this disconnect thus: “I want to have these emotions when I make the work. These weird, very primordial emotions you can experience just from matter. It’s hard to put that into words because it’s more like a feeling that you get through looking.”

Fellow Dutch artist and abstract painter, Willem de Kooning, famously defined painting as being a dialogue between painter, materials and marks; a definition that fits naturally around de Joode’s practice, driven as it is by intense interaction with the materials of painting and mark-making through her image selection and manipulation. So while the artist herself eschews direct comparisons with her compatriot, noting only that they “use the same materials but present differently,” the tensions created across the plane of de Joode’s realised works resonate with those of her predecessor, being both lyrical and dramatic.

The title of the exhibition, Soft, echoes de Joode’s focus on play between the material and digital in art and the liminality across the two. Soft may be read as a direct allusion to aspects of de Joode’s artistic process, such as the materials she uses to produce her initial three-dimensional explorations – the natural pliability and malleability of the canvases, paints, resins, foams and clays she creates with – as well as to the software she employs to document and archive her explorations and introduce them into the two-dimensional realm of the digital. But it also refers to the softness that fascinates the artist as she selects which archived images will contribute to the final works: a predilection for shadow and its umbra of natural ambiguity, the practice of zooming in and out on images that enhances softness when resolution deteriorates, and the subtle aggregation of selected images into the final holistic work. Yet ‘soft’ nowadays has connotations beyond interpretations of the material and the digital. For some the term evokes a feeling. The most popular definition of ‘soft’ on a leading online dictionary provides “What is Soft as a feeling? It’s like love, but the kind of love that makes you simply… soft. You want to stay up with your someone, you want to simply cherish them. You feel bubbly and happy and safe. You feel Soft.” De Joode’s soft painting is art that creates emotion. Art that creates feeling.

Soft forms part of Annka Kultys Gallery’s current gallery program focusing on artists producing work that explores the intersection of the material and digital, spanning both the real and the virtual and the liminal spaces on both sides of this most contemporary of divides.

Rachel de Joode is a Dutch-born, Berlin-based multi-media artist. She mixes mediums, particularly those of photography, sculpture and most recently, painting. Her work bounces between the physical and the virtual, exploring the relationship between the three dimensional object and its two dimensional representation. De Joode’s work is a constant play between surface, representation and materiality.

De Joode earned her diploma in time-based art from the Gerrit Rietveld Academie in Amsterdam. She was awarded the Deutsche Börse Residency Program at the Frankfurter Kunstverein in Frankfurt (2013) and the Sculpture Space funded residency (2012), as well as a residency at LMCC swingspace program at Governors Island (2013 – 2014) in New York. She has received funding from the Mondrian fund, the Berliner Senat and the Royal Dutch Embassy. Her work has been reproduced and reviewed in Vitamin C clay and ceramics (Phaidon), Artforum, Artnet, The New York Times, The New Yorker, DIS magazine and Charlotte Cotton’s book Photography is Magic.